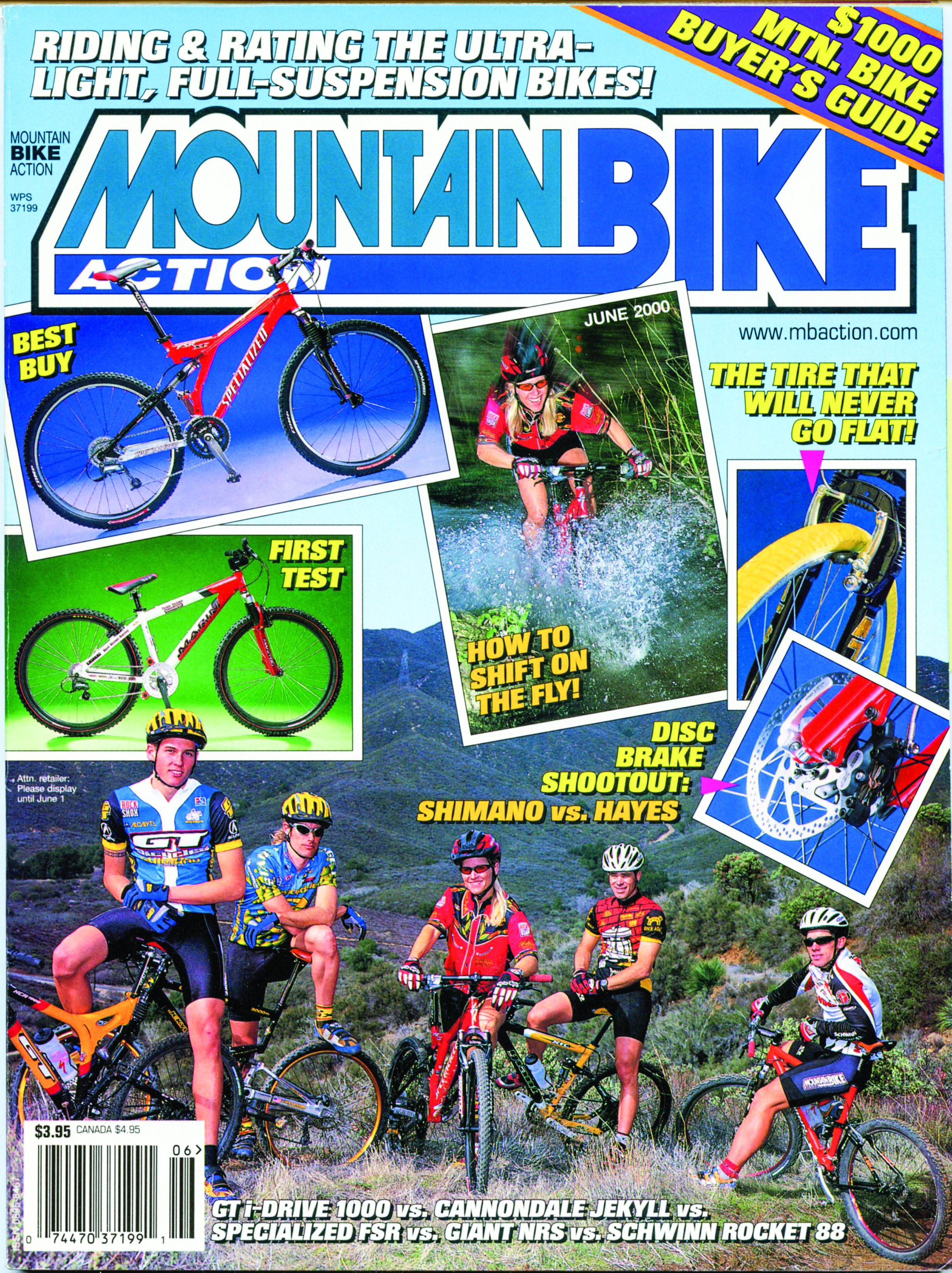 Our June 2000 issue offered a variety of interesting articles, but the biggest was our 15-page “Buyer’s Guide to $1000 Mountain Bikes.” While that figure may sound inexpensive by today’s standards, it was probably near the middle of most mountain bikers’ budgets back then. What’s more, $1000 in 1995 dollars is equal to around $1500 today, once you take 20 years of inflation into account. Of course, the bikes we showcased didn’t all cost exactly $1000. The prices ranged from $800 to $1100, and the list included both full-suspension and hardtail bikes.

We also offered a major shootout of five lightweight full-suspension bikes from some of the biggest bike brands in the U.S. 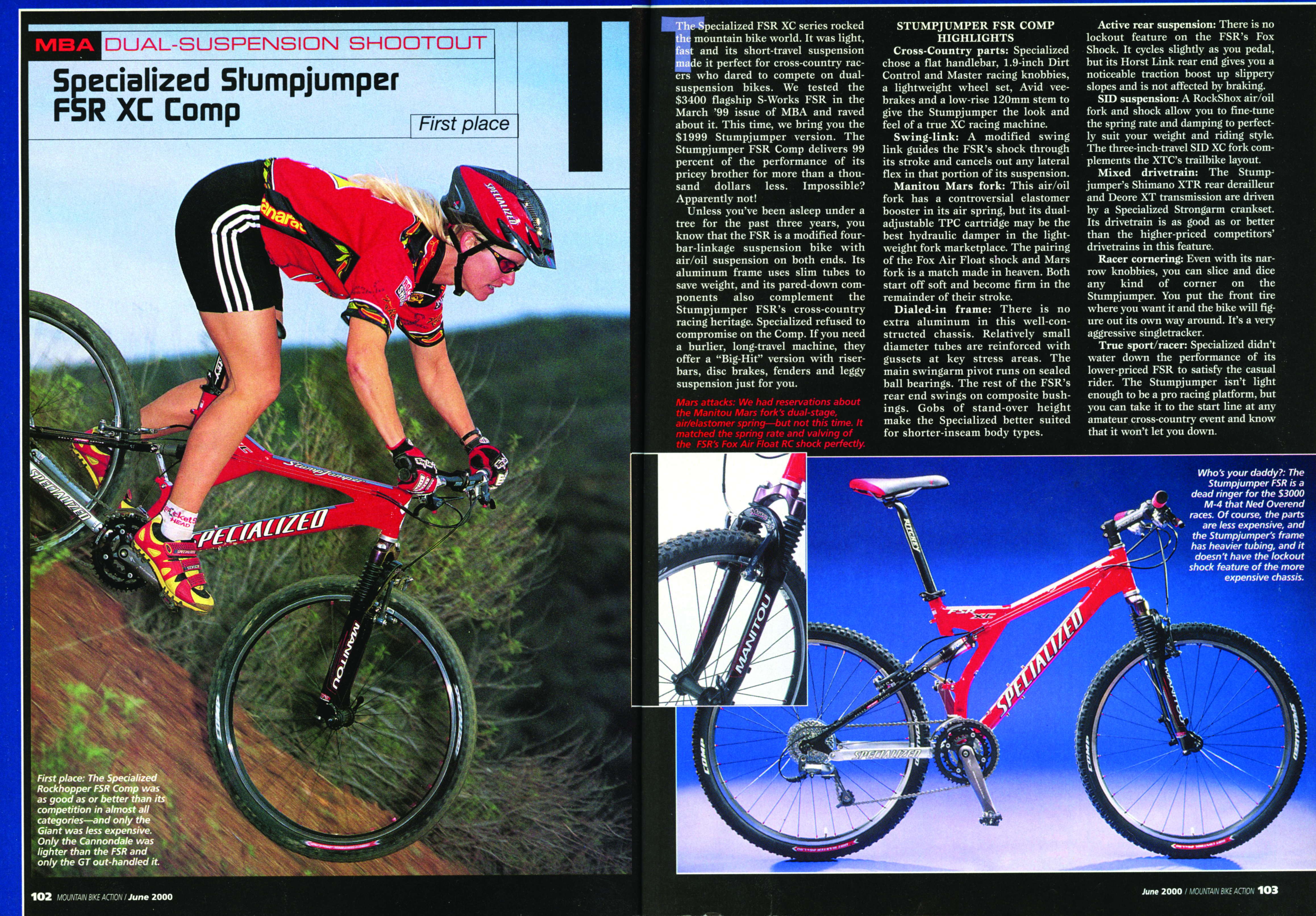 We found good things to say about all of them, too. The Specialized Stumpjumper FSR-XC Comp took first place in our ratings. Priced at $1999, it weighed 25 pounds, with 4 inches of travel in the back and 3 inches upfront. Of course, it also had 26-inch wheels, as did almost all the mountain bikes of that era, except for the kids’ bikes.

The GT XCR 1000 i-Drive came in third, priced at $3200 and weighing 27 pounds. We liked it a lot and reported that it handled technical trails the best of all five bikes, adding, “If it had weighed a couple of pounds less, it could have easily earned top honors.” GT did what it could to shave weight off the complete bike, opting for 1.8-inch-wide tires, which must have shed a few ounces from the total package, but not enough to match the lightest bikes in the comparison. What’s more, the narrow tires limited the bike’s ability as an all-around trail bike, according to our review.

The Giant XTC NRS and Schwinn Rocket 88 Stage 1 placed fourth and fifth respectively. All of our testers liked the Giant, and its $1800 price made it much more affordable than the other more expensive bikes in our shootout. The Schwinn was more of a race bike than a trail bike, but it earned high marks for its speed and handling.

The remarkable Kathy Sessler was one of MBA’s main test riders in those days, and she appeared a few times in the issue. Today, she manages the Santa Cruz Syndicate team (the pro downhill team that stars Greg Minnaar and Luca Shaw), but back then she was well-known as a pro downhiller who also liked to help us out as a test rider in some of our biggest photoshoots each month. She actually appeared twice on our June 2000 cover, scoring the action shot near the center of the cover and also appearing in the middle of the group shot of our five shootout riders.

Among our other stories in the issue, one of the best was a feature where pro downhill star Toby Henderson shared some of his tips for changing gears when riding mountain bikes.

These days, Toby uses his shifting expertise to make sure his own company’s Box Components drivetrains shift the way they should. Among the tips he offered in that article was this one: “Always ease up your power slightly when you shift. This will help the chain find its way over the sprocket teeth faster, and reduce wear and tear on your drivetrain.” Thanks again for the tips, Toby. We bet they helped thousands of readers improve their shifting skills on the trails.