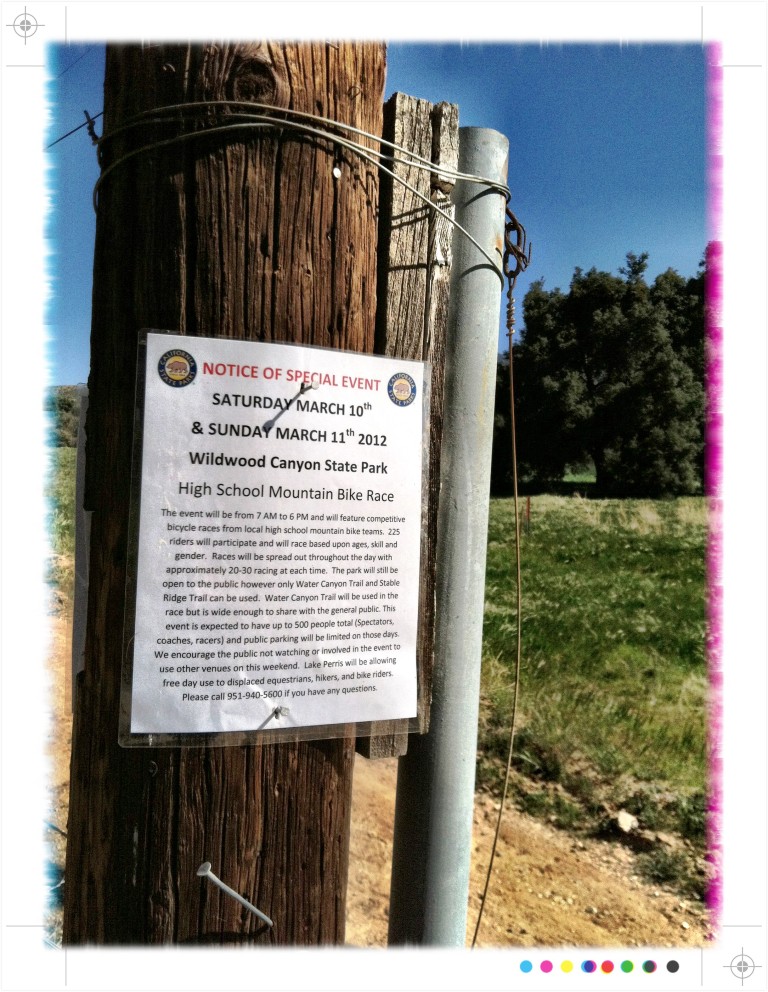 Yucaipa, Calif. ? The SoCal High School Cycling League broke new ground at round two of the 2012 racing season. It marked the first time a high school mountain bike race has ever been held in a California State Park: Wildwood Canyon. This event, dubbed the Hog Canyon Classic in recognition of the large hog farm that was here in the late 1800s, also set a new attendance record for the SoCal League. A total of 287 student-athletes representing 26 teams and many independent riders gave it their all on a scenic, dry, 4.8-mile course featuring a long, open climb after the start and a fast, flowing singletrack descent leading into an uphill finish. The new event was well received by the competitors and their many supporters.

According to Matt Gunnell, the Executive Director of the SoCal League, “Wildwood Canyon turned out to be an ideal venue for a high school race. With a great combination of wide-open climbs and swoopy singletrack, I had great feedback from our riders on the fun factor of the course. We hope to be able to return for another edition of the Hog Canyon Classic and hope this will help high school mountain biking build a strong relationship with our outdoors-loving friends at the California State Parks.”

“The racing was of the highest caliber and the straight uphill grass finish provided many great drag race style sprints that were thrilling to watch. Several new Leader Jerseys were awarded and some of those may change hands all season, as the competition is extremely tight. This was truly one of the best weekends of racing we’ve ever had in the SoCal League,” concluded Gunnell. 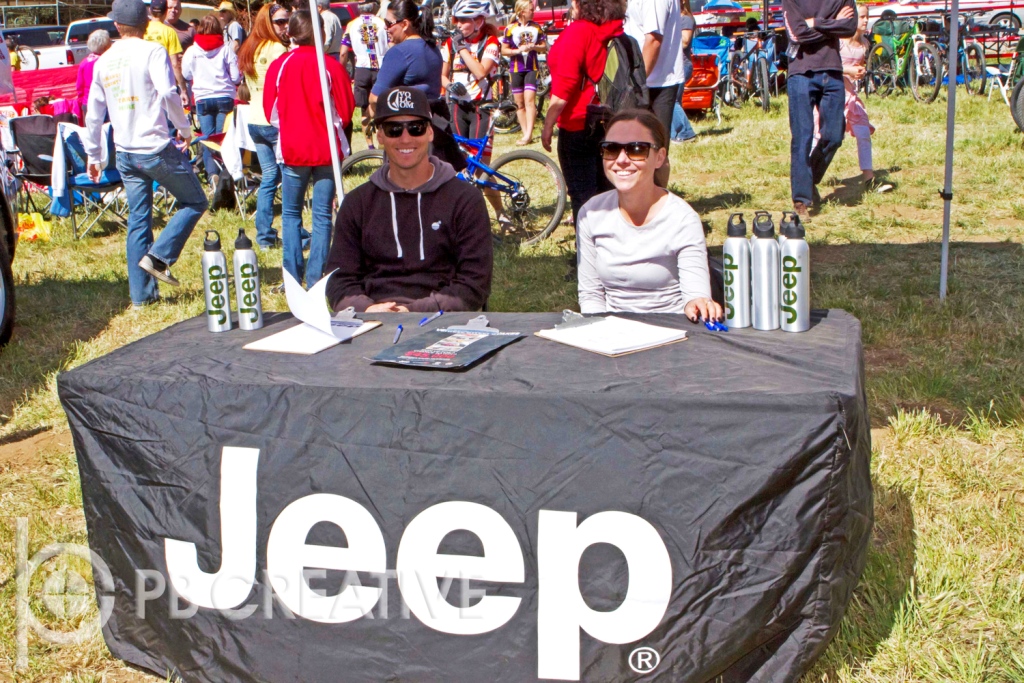 Jeep’s In The House-Ryan and Danielle came out to Yucaipa to talk Jeep. The SoCal League is glad to have you here!
Photo credit Phil Beckman, PB Creative

Teams
Perennial powerhouse Hemet High School scored its first Division 1 team win of the season, topping round one winner Woodcrest Christian High School. These results put Hemet in the points lead for the season as well. When asked what made the difference this time, Hemet Head Coach Pete Kirkham was quick to answer, “Boys. The boys stepped up. We had a few issues in the first race that needed to be addressed, and they responded. The girls came through as well, and overall it was just a fantastic day. Again we had great competition with Woodcrest and Yucaipa pushing us. It’s going to be crazy this year. It could go any way on any given day.” 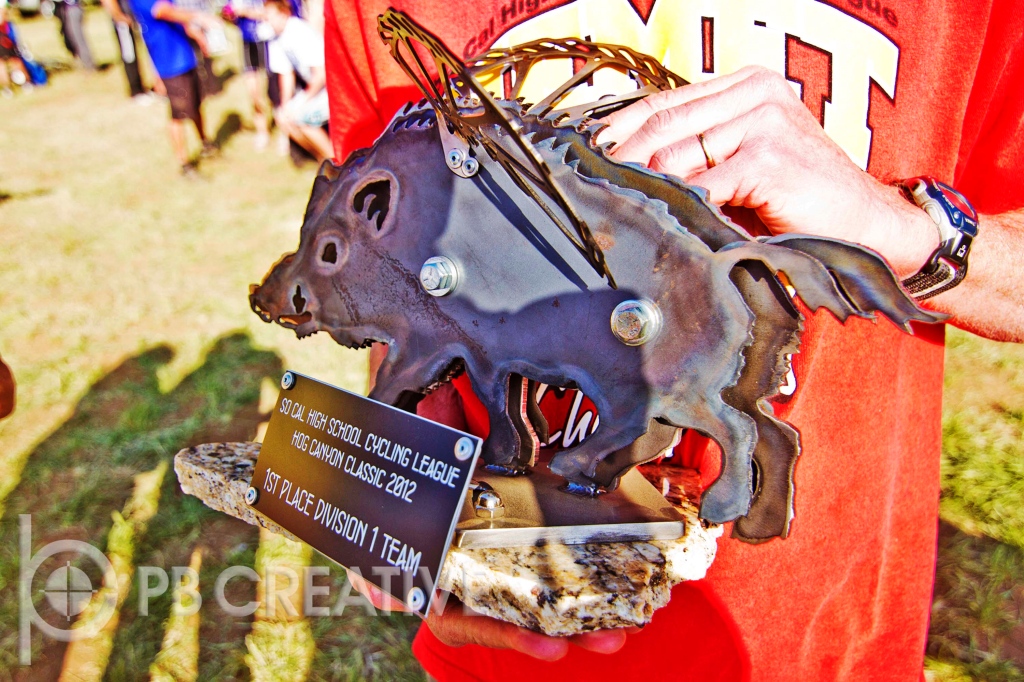 The host team, Yucaipa High School, did a fantastic job of assisting with the event and finished third overall on their home court.

Another “first” at this event was the Division 2 team victory by Redlands Composite?in only its second race ever. Head Coach Matt Freeman said, “I think our success is due to a number of things all coming together. First of all, we have dedicated families in our program. Of course we also have a huge support system outside of coaches and family. The practice and training out on the trails are fun for everyone because the kids have really bonded together as a family. So, yes, we have had sudden success, but as each week passes, the coaches learn that there’s more that we need to focus on?a lot of that being character building. Coach Woody, Zach, Cedric, and I all believe that is one of the greatest purposes of our program. And if we can win some races while we’re at it, then we’ll consider it a success.”

San Gabriel Valley Composite was second on the day and leads the season standings. South Orange County Composite took third and holds that position in points as well.

Varsity Boys
Taking his first victory in this class was Joel Titius (Corona Composite), but not without tremendous pressure from Jesse Rogers (Independent). After breaking away from Rogers and Lucas Rowton (Crescenta Valley) on the third of four laps, Titius was reeled in by Rogers on the final lap to make it a thrilling sprint finish. “He was breathing down my neck, for sure,” said Titius. “I was fairly confident that if I could stay on my bike I could hold him off. Jesse needs to keep putting the pressure on; he keeps getting faster. I’ll be watching for him.”

“I made up 45 seconds on the last lap and it ended up being a pretty good sprint” Rogers stated. “You always want first, but it was a close race so it was fun.”

Rowton crossed the line alone about two minutes later for third in the field of 26.

Titius now leads the point standings by one over Rogers, with a consistent Alex Bagg (Yucaipa) in third.

Varsity Girls
Hannah Rae Finchamp (San Gabriel Valley) gave an instant replay of her day at the previous round by once again dominating Varsity Girls. Ever humble, Finchamp felt, “I can never relax, with the level of my competition. So I just keep my head down and keep pushing because any one of these racers could be on my wheel.”

Hemet’s Emma Klingaman was again a solitary runner-up among nine riders in the class. “I tried to keep Hannah in sight but eventually she took off. I just tried to keep my second position solid. My competition’s awesome; I love being pushed by them.”

Morgan Zurborg (Woodcrest) climbed yet another step and finished third on the strength of three very consistent laps.

Finchamp stands atop the point standings after two of five rounds, followed by Klingaman. McKenzie Melcher (Redlands) and Zurborg are tied for third. 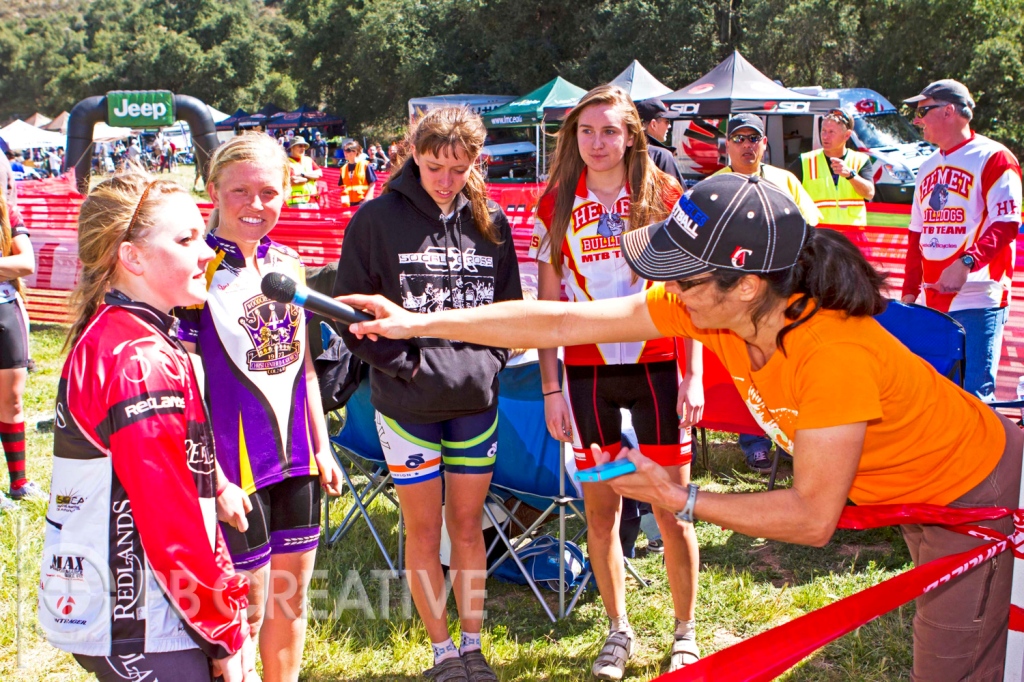 JV Boys Division 1
Despite competing in a U.S. Cup event the day before, Jarred Jordan (Murrieta Valley) made it two-for-two for 2012 by again emerging at the front of a very competitive 36-rider field. As he described his day, “My legs totally felt like lead the first two laps, and they had a minute gap on me. So I just dug deep on the third lap. I was surprised and excited when I got to the finish line.”

JV Boys Division 2
After dealing with illness at the last round (and still placing second in a sprint finish), Kyle Skeen (Ramona) was all better at Wildwood Canyon and ended up eclipsing the JV Boys D2 field of 35 by over six minutes. “I just felt awesome,” he explained. “I’d like to thank my competitors, because they did a good job too.”

This race’s finish reflects the current point standings for the class as well. 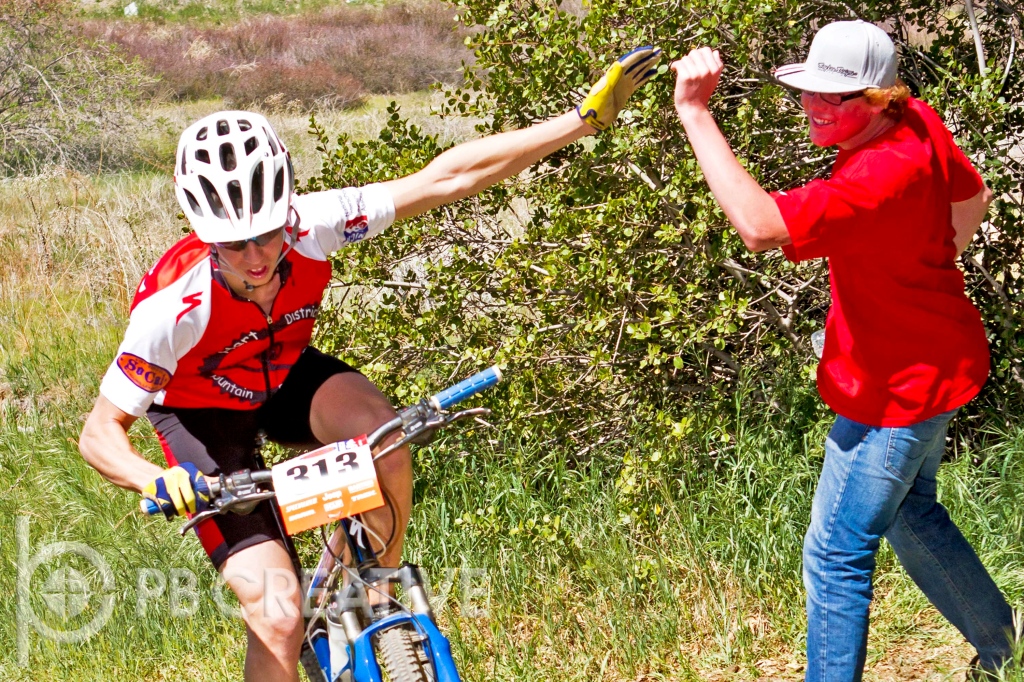 This set up one of the most unlikely scenarios in any sport: twin sisters (and teammates) are now tied at the top of the point standings and will wear matching leader’s jerseys at the next event in Keyesville.

Reka Felenyi won despite a nagging injury. “My knee was hurting a little,” she explained. “I broke it last year and tore a muscle. It hasn’t healed completely yet. I want to thank my coaches and family and my teammates for all their support.”

Third in the standings with three events to go (a rider’s best four finishes count for the championship) is Melcher.

Sophomore Boys Division 1
Murrieta Valley High School had a rewarding day with Cole Picchiottino and Michael Gossett finishing first and second in this 32-rider class. Evan Cobb (Crescenta Valley) was just a few seconds behind in third at the end of three laps.

Picchiottino is a downhill specialist who only recently took up cross-country racing, so it’s not surprising to hear him say, “All the climbing kind of hurt me, but the downhill singletrack suited me well. I will not be racing the next round at Keyesville. My plan is to win titles in both the SoCal League and in downhill, so I will be at the downhill national instead on that weekend.”

Sophomore Boys Division 2
Sammy Bello (Independent) rocketed out to an early lead and never looked back in this 38-rider class, winning by a comfortable margin ahead of Jeremy Call (Royal High School) and Bryce McKibbin (Santa Ynez Composite). “The key was getting that start and then keeping a good pace the rest of the race,” said Bello. “I’m proud of getting second in the last race and first here, because it means my training and the food I’m eating are good and I’m getting stronger.”

Bello now leads the overall standings with Call and McKibbin tied for second.

Bradley holds the leader’s jersey, with Jewell and Mariana Santisteban (Eastlake) in second and third, respectively.

Freshman Boys Division 1
This was the largest class of the day with 40 riders, a good omen for the future of the SoCal League program.

According to Lansing, “It was a great race. It was tiring with so much climbing, but climbing is a strength. The downhill here was tricky trying to pass, but most riders were considerate.”

Lansing enjoys a clear lead in the season standings, with Rowton and Micah Swinhart (Woodcrest) looking to rearrange the order.

Pflughaupt reported, “Imeh and I battled it out on the first lap, but then I guess he got hooked up behind some slower riders. That opened the door for my win. The crowd was really exciting, and everyone was cheering. It’s really fun to be here.”

After Hog Canyon, Pflughaupt leads the class standings over Nsek and Nelson. 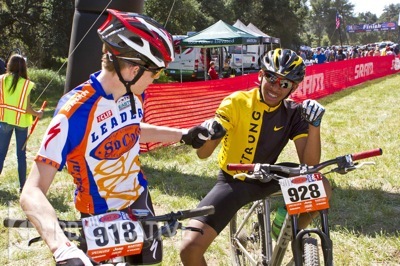 Freshman Girls
The top three at this event was a repeat of round one, with Hemet High’s Alexis Marques and Hayleigh Kirkham finishing ahead of Danielle Emter (South Orange County) and 12 other competitors. These three hold those same positions in the point standings too, of course.

Marques’ most challenging moment of the race may have been an encounter with a snake at the start of her second and final lap. As she describes it, “It scared me; I screamed!” 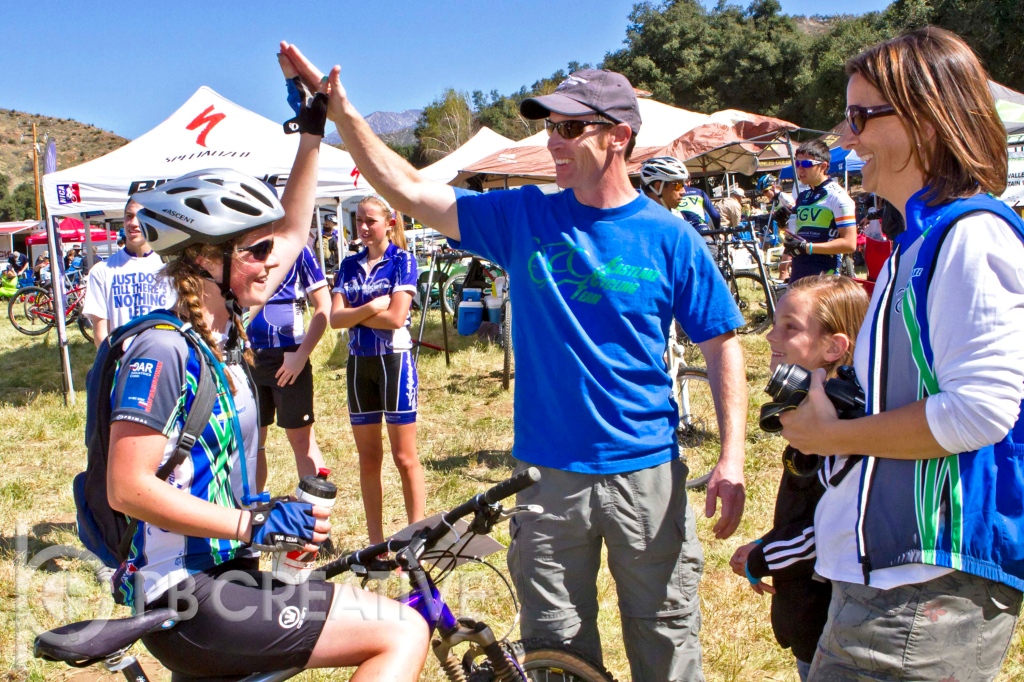 A Well Deserved Five-Eastlake’s High School athlete, Kaitlin Washburn (714) is all smiles. Finishing a mountain bike race is a huge accomplishment. It was a record turnout for the SoCal League at Wildwood Canyon.
Photo credit Phil Beckman, PB Creative