Felt Bicycles invited us out to their Irvine, Ca. headquarters for the launch of their 2013 product line. Felt’s 2013 offering sees a completely revamped Nine hardtail 29er family, the introduction of big wheels into the full-suspension Edict family and the revival of their long-travel 26er, the Compulsion. 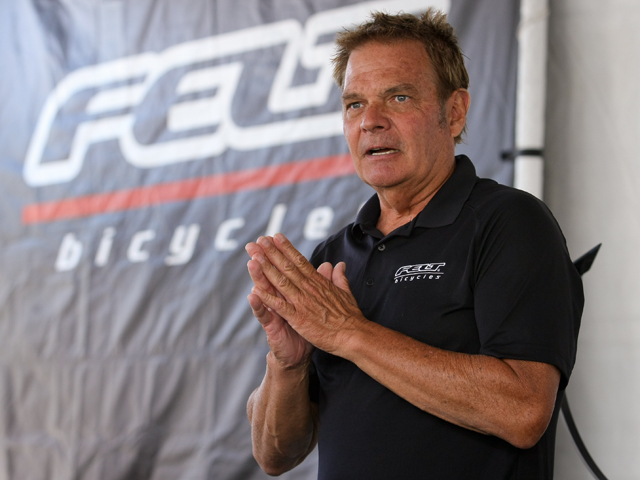 The man himself, Jim Felt, was on hand to introduce the 2013 bikes. 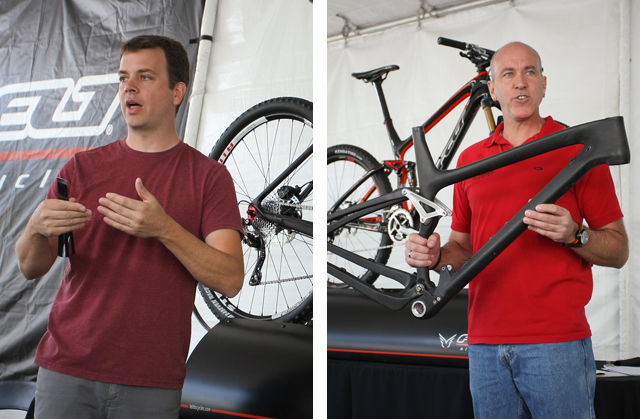 Who better to learn about the new bikes from than the engineers responsible for designing them?

Nine Series
Updated Geometry and Features
Felt’s Nine Series consists of both carbon and aluminum hardtail 29ers. For 2013, the whole series has been revamped from the ground up. The geometry is now optimized for use with a 3.9 inch (100 millimeter) fork instead of 3.1 inch (80 millimeter). For the carbon offerings, the headtube was steepened .5 degrees to 71.5 degrees and the rear center was shortened to 17.3 inches, .2 inches shorter than before. According to Felt, this maintains the tight handling that racers are looking for with the added benefit of the longer fork. The headtube has also been shortened for a a race ready geometry. The aluminum offerings have a slightly slacker head angle (71 degrees) for a more stable trail feel.
The carbon offerings feature cleaner lines and a variety of updates over the previous generation, including: internal, guided cable routing, “Inforce” carbon armoring integrated to the inner plys of key impact zones, smaller, rounder chain and seat stays along with a smaller diameter 27.2 millimeter seatpost for more rider comfort and an oversized bottom bracket and tapered head tube for increased stiffness. As always Felt uses their Insideout molding process in the frame construction. 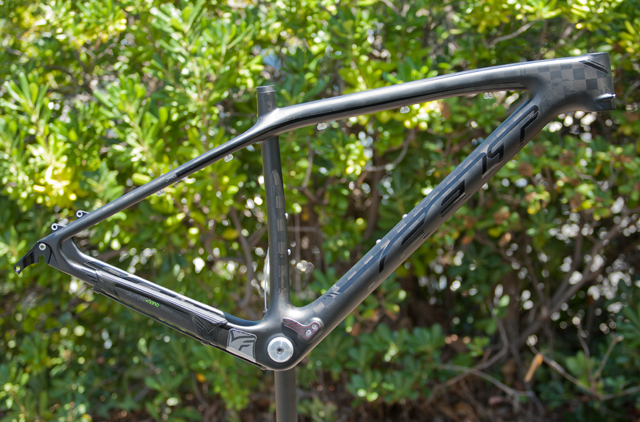 The Nine FRD is only available as a frameset and retails for $2,900. It weighs in at a scant 900 grams and is a claimed 40% stiffer over the previous generation carbon Nine frame.

Felt’s new Shimano direct mount derailleur hanger is available for aftermarket purchase for nearly all models but will only come stock on the FRD. The Tapered headtube houses the entry points for the guided, internal cable routing.

Three Carbon Options
Carbon Nine Series frames will available in three different levels. Being believers in the benefits of carbon, Felt aimed to bring a high quality carbon frame down to an enthusiast price point. The new entry-level carbon Nine Series frame found on the Nine 3 ($2,800) seems to prove this.  Weighing it at 1120 grams, the frame is the same weight as the previous top-of-the-line SL frame, while boasting a claimed 50 percent stiffness increase.
The “middle-level” carbon frame found on the Nine 1 is stiffer yet again and weighs in at 1000 grams, featuring a 1.5K weave outer-layer carbon for increased durability. The Nine 1 complete bike this frame is found on will retail for $5,170.
Perhaps the most striking model is the new flagship Nine FRD. Available as a frameset only ($2,850), the FRD weighs a scant 900 grams while maintaining a claimed 40 percent stiffness increase over the previous generation.
To achieve this, Felt utilized a new carbon blend dubbed UHC Nano TeXtreme. Sweden-based Oxeon manufactures the material which takes standard carbon fibers and spreads them out very thin and uniformed into what is called a “spread-tow tape.” This allows for the fibers to be more closely spaced, creating a stronger, lighter and thinner material.

This diagram shows where the InForce internal armor is added to the inner plys of the carbon to help protect against impacts. 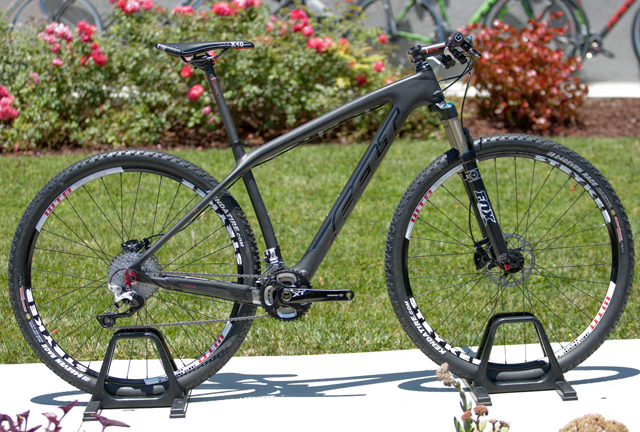 The Nine 1 retails for $5,170 and features a Shimano XT drivetrain and brakes as well as a Fox Float CTD fork.

The wide, low-rise handlebars keep the front end aggressive to appease racers. The seatpost has been reduced to 27.2-millimeter diameter for a more forgiving ride. 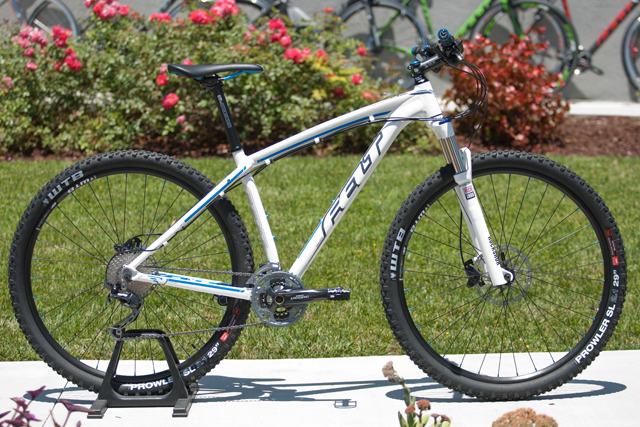 The Nine 50 retails for $1,660 and features a Shimano Deore drivetrain and a RockShox Recon Air fork.

The head angle on the aluminum models has been slackened by .5 degrees in comparison to their carbon counterparts. Special attention has been given to the chainstay/bottom bracket junction to maximize tire clearance. 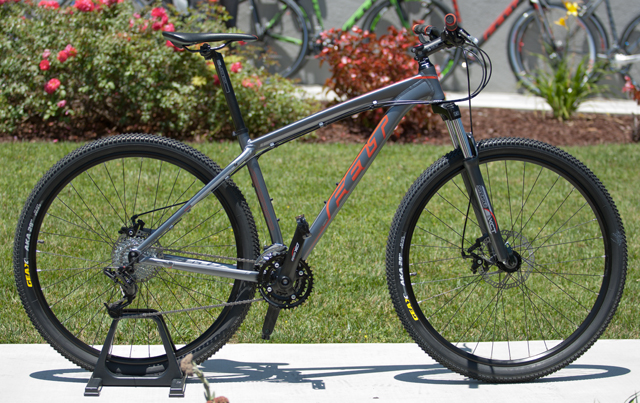 The Nine 80 retails for only $620, while sharing the same geometry as the higher end aluminum models.

Edict Nine Series
FAST Goes Big
Introduced earlier this year at Sea Otter, Felt has entered into the buzzing world of full-suspension 29ers. The line consists of five different models ranging from their top of the line Edict Nine LTD ($9,300) constructed of Felt’s UHC Ultimate Plus Nano carbon fiber, down to their aluminum Edict Nine 60 which retails for $2070.
Felt’s aim with the Edict Nine was to create a bike that blends efficient climbing characteristics with a heavy dose of downhill confidence. 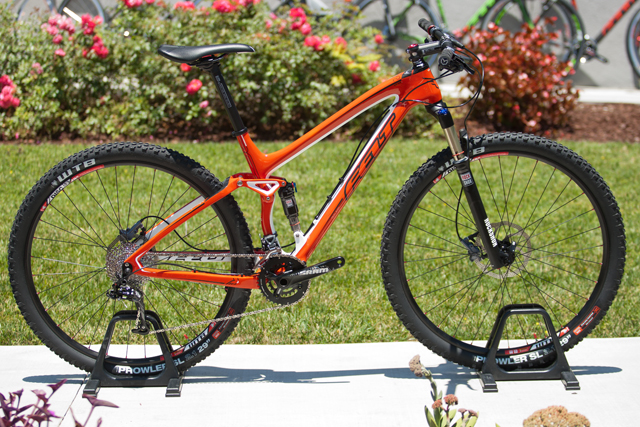 The Edict Nine 3 is the starting point for the carbon offerings and retails for $3,630 with a SRAM 2×10 drivetrain and Rockshox Recon Air fork.

Compulsion Series
Big Travel Revival
Felt is hoping 2013 will be their “big push” back into mountain biking. In order to do this, it was important for them to have all of their bases (or travel options) covered. After disappearing from US market in 2012, the Compulsion series is back. The frame now features 5.9-6.2 inch (150-160 millimeter) adjustable rear travel via the rotation of a linkage mounting spacer. The series now includes two models with a UHC Performance Carbon front triangle and 6061 aluminum rear triangle and one full 6061 aluminum offering.
The Compulsion series is geared toward all-mountain and enduro riders and comes with ISCG mounts and cable routing options under the top tube for a dropper seatpost. With a slack 67.5 degree head angle, the frame has been redesigned to be stiffer and provide a lower stand-over height.  The headtube is tapered from 1 1/8 to 1 1/2 inches and the rear end features a 142×12 millimeter through axle. The seat- and chainstays are also triple butted for lighter weight and increased stiffness. 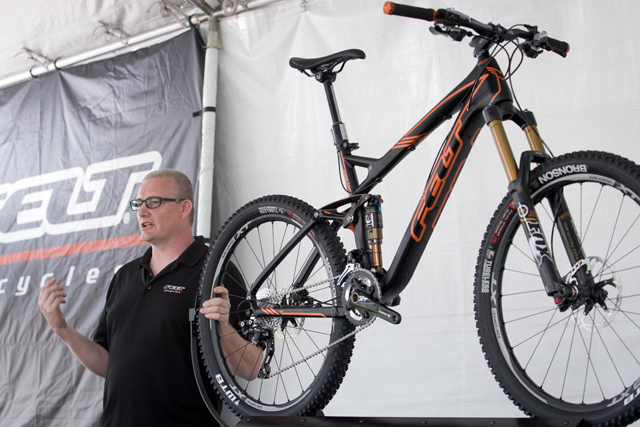 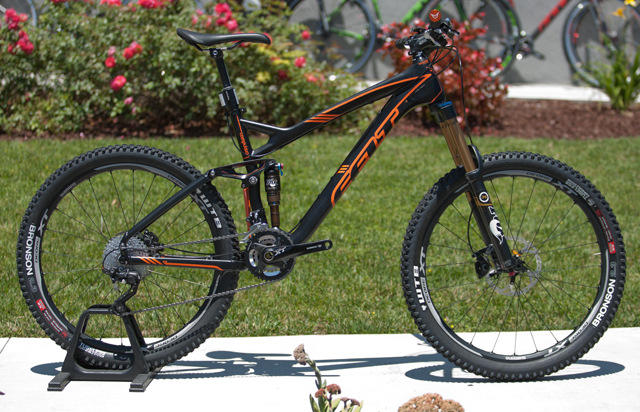 The Compulsion LT1 retails for $6,200 and features an XT 2×10 drivetrain and Fox CTD suspension and a CrankBrother’s Kronolog dropper seatpost.

Internal routing for derailleur cables keeps the cockpit tidy. Shimano’s new Shadow Plus XT rear derailleur will help keep the chain under control through the rough terrain this bike is designed for. 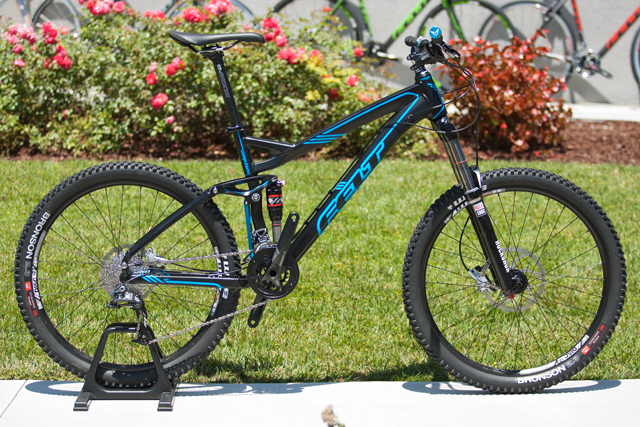 The Compulsion LT50 retails for $2,900. The only full aluminum model in the line, it features a SRAM 2×10 drivetrain and RockShox Suspension.