MBA: Where and when were you born?

Chris: I guess this is where I get to reveal my real age. I was born in 1957 in California.

MBA: When did you get into ing mountain bikes?

Chris: My introduction to mountain bikes came in the late ’80s when my brother brought over his new Specialized Stumpjumper. I loved the looks so much that I went out and bought the same bike the next day. Two days later, I sold it. Too much work. Five years later, I was back into it full-bore.

MBA: Was it BMX or motocross that got you into mountain biking?

Chris: For me it was BMX, with an obsession for motocross, which eventually led to racing motocross and then on to mountain biking.

MBA: How did you start shooting photos of mountain biking?

Chris: Like everything in my life, the camera always follows me with whatever I’m really into—in this case, mountain bikes. With all my years shooting motocross, mountain bike photography was a smooth transition.

MBA: Did you study photography in school?

Chris: I got my degree from the school of self-teaching. No formal education. Just lots of books and trial and error.

MBA: How did you come to start shooting for magazines?

Chris: I was hanging out and riding regularly and looking for an opportunity to work in the cycling industry. Then one day my buddy from Mountain Biking magazine, Steve Giberson, resigned. My opportunity arrived. To show the mag editors how serious I was about wanting the photo editor position, I plopped down five grand at the camera store for all-new Nikon equipment. I guess I passed the audition.

Chris: Epic in every way. I was a fulltime magazine staffer in a sport I was obsessed with, surrounded by every brand of mountain bike I wanted to ride. I was no stranger to the journalism business with my past experience as an editor of Dirt Rider magazine, so it was a smooth move back into the magazine world. 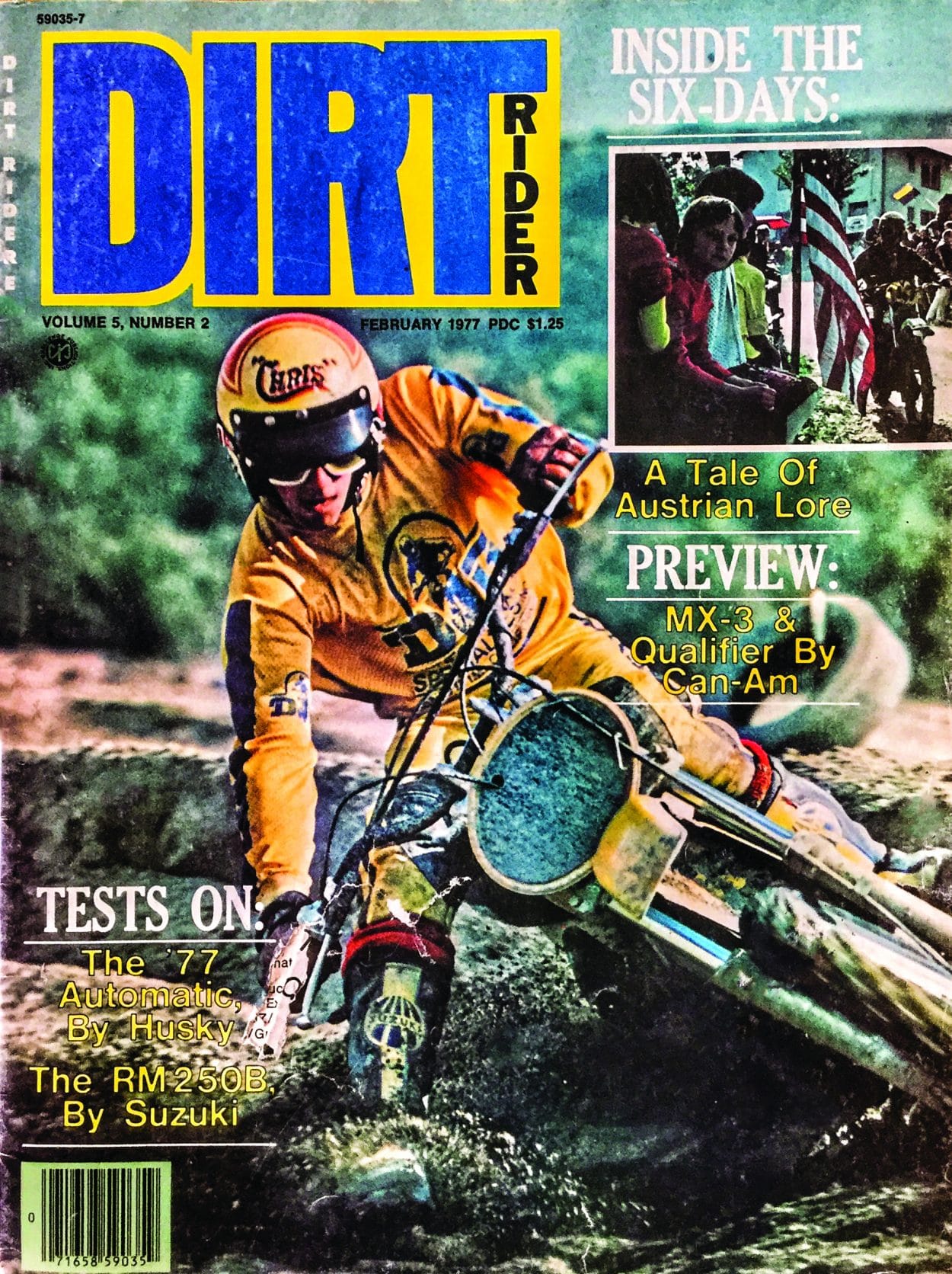 Chris was a motocross rider and “Dirt Rider” editor in his younger years. That’s him on the cover of the magazine in early 1977. Chris hadn’t yet turned 20 when the photo was taken. You can see the name “Chris” on his helmet if you look closely. Chris appeared on two covers of the magazine during his time with the publication.

MBA: How did you come to start shooting photos for the bike companies?

Chris: It started with me providing race shots to the bike companies, which eventually led to doing their catalog shoots.

Chris: I loved it. I did action and lifestyle photography for bike companies as well as studio photos of entire bike lines.

Hatounian recall the story of the above photo:” It was Super Bowl Sunday in 1997, and Stone Temple Pilots’ lead singer Scott Weiland was discovered missing from his court-ordered, extended stay at a rehab facility. No one could find him, and the local radio stations were all over the story. Many feared the worst as bandmates and managers searched without success to locate him. So where was Weiland? The last place anyone would ever expect: standing at the front door of my West Hills home. He came here to pick up his new carbon mountain bike that I was able to get for him from Trek. Fully clad in rock-and-roll attire and seemingly relaxed, Weiland spent a couple of hours lounging on my sofa while I explained the benefits of cycling as an alternative to his current lifestyle. No word on if he was able to return to rehab with the bike.”

MBA: Whom did you shoot for?

MBA: In checking out your photos, it looks like you also took a lot of pictures of rock stars. Who were some of the more famous rock stars you got to shoot?

Chris: With sobriety a growing trend among musicians, big-name rockers were looking for a clean alternative to polluting their bodies, and I was in the right place to connect with most of these guys. Duff McKagen [Guns and Roses], John Taylor [Duran Duran], Scott Weiland [Stone Temple Pilots], Steve Jones [The Sex Pistols], Billy Duffy [The Cult] and Eddie Money to name a few.

MBA: Where did your rockstar photos get published?

MBA: Were many of those rock stars also mountain bikers?

Chris: All the rockers I knew were riding when I got to know them.

MBA: Who are some of your favorite mountain bike pros, and what made them so memorable?

Chris: That’s easy. John Tomac tops the list. He was such a class act in every way. Not the most chatty guy when interviewing but a great rider to photograph. But right up there were Ned Overend, Wayne Croasdale, Missy Giove, Mike King, Eric Carter, Jake Watson, Dave Cullinan and many more. Great athletes and lots of fun to be around. I’m glad you didn’t ask me who some of my least favorite mountain bike pros were [laughs].

MBA: Have you ever thought about producing a book or gallery showing of your favorite photos?

Chris: I’ve got a book nearly completed titled Every Picture Has a Story. It’s 40 years of photographing rock stars, massive fires, cycling, motocross, landscapes and so much more, and some incredible stories to go with the images. It would be a shame not to share them.

MBA: Can you tell us about the bad crash you suffered a while back?

Chris: Two years ago and still plenty of pain. I was up at Frazier Park doing a video and still shoot with the guys for KHS. We decided to do a run down the singletrack before the shoot. One minute I was in my groove, shredding down the mountain. The next minute, lights out—nine broken ribs, punctured and collapsed lung, broken sternum, dislocated shoulder and a $22,000 helicopter ride to the ICU at Henry Mayo. I was barely breathing when they got me there. Three weeks total in the hospital and many months of agonizing physical therapy to follow. A truly life-changing experience.

MBA: How many years did you shoot photos for KHS?

Chris: Eighteen years. It was a great run. Wayne Gray and agency head Brian Hemsworth were fantastic when it came to letting me flex my creative muscles on most of those photoshoots. Some of my best lifestyle and action photos were from all those outings.

MBA: Do you still shoot much mountain biking these days?

Chris: Not nearly as much as I’d like to.

MBA: How do you mainly earn a living these days?

Chris: I currently divide my time between photography and an equally creative profession—home remodeling. It’s great exercise and a wonderful networking tool. But, I’m not trading in my Nikon equipment for a nail gun just yet.