The 2021 Proving Grounds kicked off again this year at the Oregon Dirt Park just outside of Bend, Oregon. Flash back to 2019 when Proving Grounds was born. The concept was to blur the lines between big mountain and slopestyle, and in this year’s event, athletes were able to choose their own lines. The course is a playground with multiple options where riders have an opportunity to pick whatever suits their skill, style and strengths in a competitive environment. From Reed Boggs’ flawless win to Casey Brown’s historic run that first year, the event stands as a game-changer that is highly celebrated by the athletes, fans, media and industry.

For 2021, the festival continued to include both men’s and women’s open categories with two days of competition. Friday kicked off with a jump jam and Saturday with the main event. Unlike the first year, Proving Grounds is no longer a qualifier for the Red Bull Rampage. Instead, this event will be branching off with its own individual freeride series in the future. Even without this as a Rampage qualifier, it still fills a void in this segment by providing a platform and opportunity for athletes to show what they are capable of.

When the weekend wrapped up at the Oregon Dirt Park, Carson Storch and Camila Nogueira stood atop the podium with trophies held high, but that’s only a part of the story from the weekend. Making his debut at the first competition he’s ever raced in, Dylan Stark threw down a massive first run. For those unfamiliar with him, Stark started riding BMX and mountain bikes at a very early age and has maintained his love for both ever since. Stark is a mad man with his urban stunts, like being the first in the world to stomp a “crank grind” on a mountain bike or to roof-jump into the famous El Toro drop. His style and daring hucks thrust him into the spotlight of online cycling media and into the YT Family. Proving Grounds is about showing what you are capable of, and Stark took full advantage. He stomped a solid run that scored him an impressive third-place finish, considering the competition included names like Carson Storch, Reed Boggs, Paul Genovese, Kyle Strait, DJ Brandt, and Jaxson Riddle. To find out more about this event, the MBA crew got in touch with Dylan Stark to hear his thoughts.

What does this event mean to you?

This was my first real mountain bike competition. It was pretty wild for me to get the e-mail. I still feel pretty new to the scene, and I haven’t done many freeride competitions. YT was the main sponsor, so that did help to get my name onto the list of 14 riders. Pretty wild there were only 14, considering the scene, but that was the first time I’ve ever ridden anything that big or even that gnarly. I think the El Toro drop was about as big as the last drop at this Proving Grounds course. Overall, I was stoked to be a part of this with a super-fun set of jumps.

Why did you have the most runs in practice?

I was the first one to ride top to bottom, which kind of surprised me. A lot of the athletes showed up who ride big jumps, and to me, it just made more sense to try to get your speed right from the top while they were sessioning sections. Really, though, I was just having fun! Not to mention there was a shuttle at the bottom to bring us back up, so I avoided hiking. We did have some weather that stopped us from having more runs, but the amount of wind and rain made the conditions perfect for the final practice day before the competition.

Tell us about the Heart and Soul Award that you and Hannah Bergemann won that weekend.

They told me at the end that I won and I was stoked! Not only did I show up to have fun, I took in the full experience of the week. Instead of staying in hotels, I camped there and hung out with the diggers/crew that made the event possible. I gave it my all on my last run, and the wind got me on the last jump where I tried to do a front flip. I actually never really do them but wanted to nail it. I almost had it, which kinda ticks me off. I knocked myself out pretty good at the bottom. I’m not even sure how I really got the award, as they just kind of surprised me with it.

What was your favorite trick and feature at the event?

I’ve never seen features of this size, and the “shark fin” was my favorite. To me, that was the most fun feature. It was so fun to just blast at it! Some riders were scared of it, and I could see everyone was more focused on nailing their drop trick.

Are you going to continue to move on with this type of discipline?

I rarely get to ride big stuff, and that is what the downhill bike was made for. The crew that built these jumps made everything so proper. It’s weird going to Snow Summit now, and everything feels like baby jumps. It’s no longer a qualifier, and I think they are trying to go with their own series or a freeride tour. Hopefully next year they are going to try to make multiple stops. It would be super rad to be doing more freeride stuff in North America! It was a big opportunity, and I feel like I was able to prove myself to the world. I was given the chance, and I’ve been pushing to be in the scene. It’s a large foot in the door for me to do more events like this. I was in the wildcard for Rampage 21 this year with a good chance I can compete in ’22. With that said, I am going to go and watch this year and make sure I really want to try it. It looks pretty gnarly! 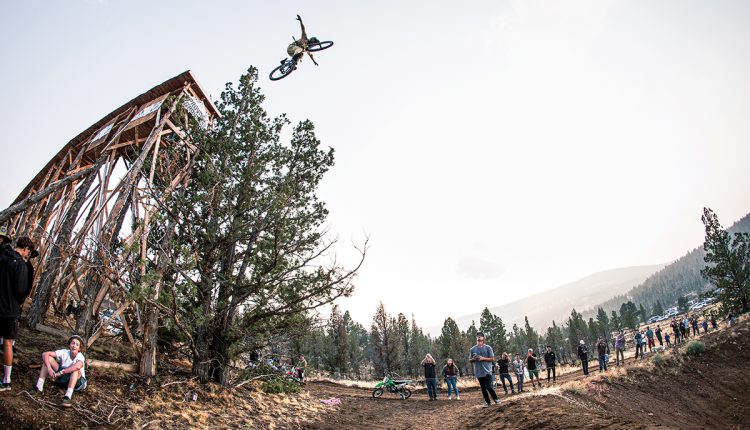 Dylan Stark (shown here) said afterward, “I rarely get to ride big stuff, and that is what the downhill bike was made for. The crew that built these jumps made everything so proper. It’s weird going to Snow Summit now, and everything feels like baby jumps.”

TURNER BIKES: IN ONE MAN, A VOLUME OF TECH HISTORY