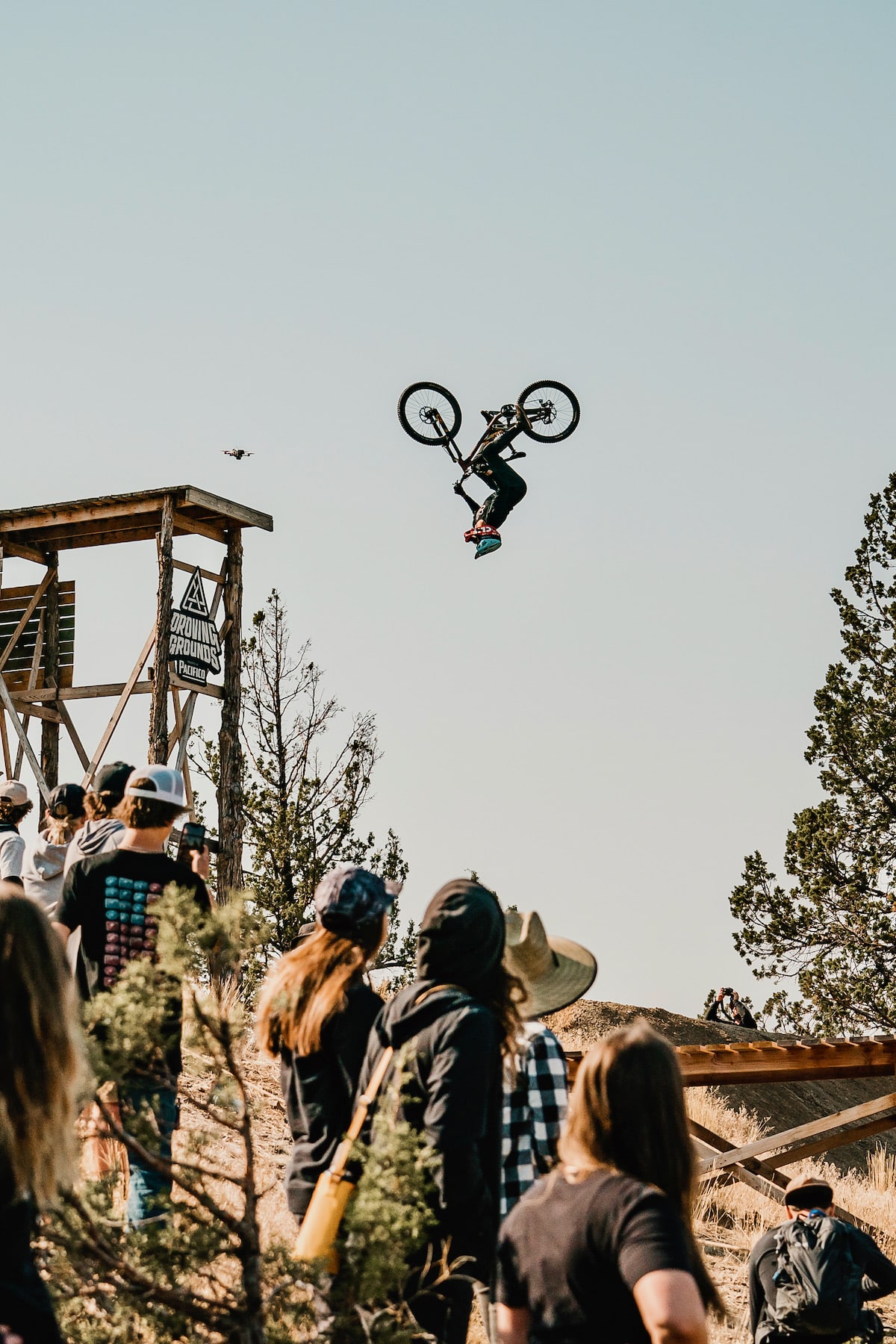 Brrett Rheeder backflips off a drop on his way to the win. Photo by Chad Comlack/Natural Selection Proving Grounds

Prineville, OR (September 10, 2022)–Brett Rheeder (USA) soundly marked his comeback to competition and Camila Nogueira (ARG) defended her title from 2021 putting down the best runs of the day to win the Natural Selection Proving Grounds presented by Pacifico. In the contest’s most heated edition yet, riders blended big mountain freeriding with slopestyle tricks in a choose-your-own-adventure-style course designed to support the sport’s progression in real time. 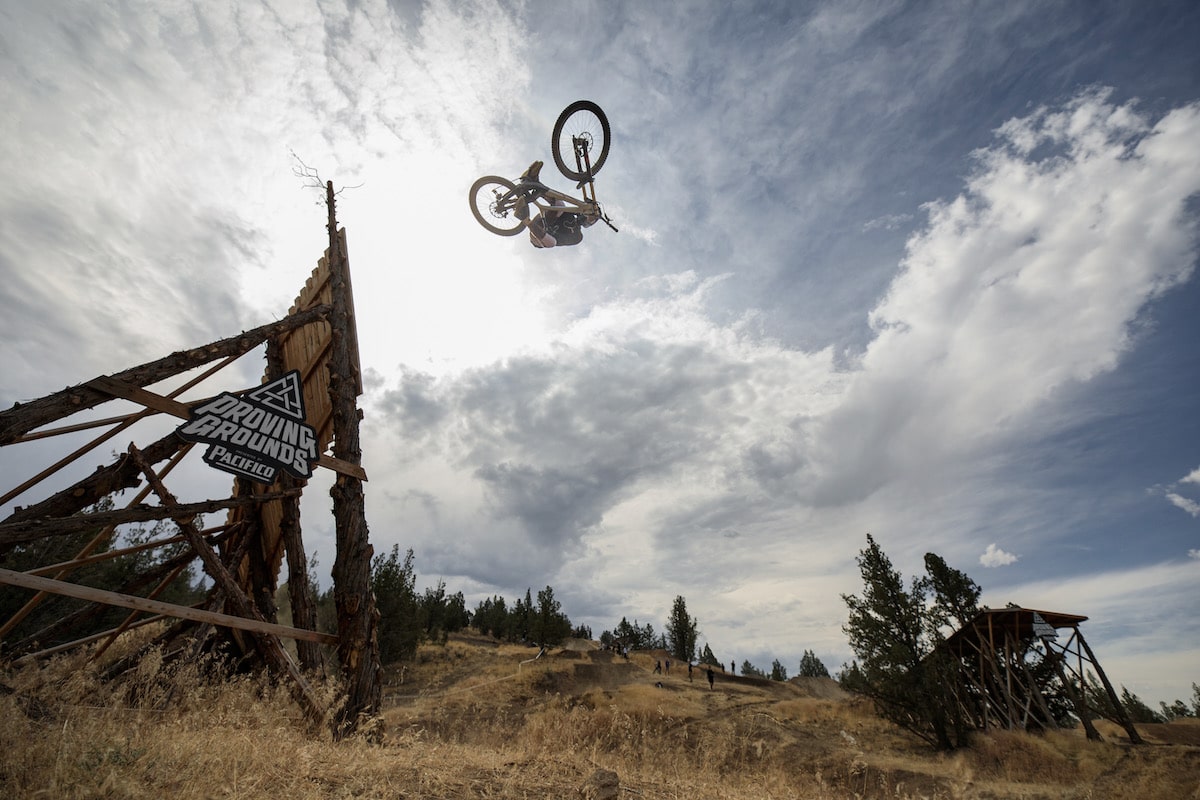 The Natural Selection Proving Grounds Super Finals featured a stacked field of the world’s 30 best men and women in freeride mountain biking linking creative lines through massive wooden features and prime dirt jumps, gaps and berms. A one-hour show produced by Natural Selection and Freeride Entertainment under the lens of the Natural Selection Tour’s signature, Emmy-nominated racing drone POV angle flown by Gab707 (DRL) will stream for free on NaturalSelectionTour.com starting Friday, September 23 at noon PT and will broadcast on ESPN2 on Sunday, September 25 at 3PM PT.
Rheeder arrived at the venue this week to support girlfriend Casey Brown, and seeing the course decided to enter as a wild card, notably in his first contest appearance in nearly three years. Rheeder qualified in first. He put it down on his first run in the Super Finals, earning the top score of 93.25. Rheeder dropped in on his downhill bike modified with a single crown fork hitting the gas from the go with a flat drop backflip off the upper drop, into the left hip with an opposite flat spin, a high-speed tail whip off the Meat Cannon, into the big Moto Jump mid-course spinning a regular flat spin, into a bar spin off the massive Bomber Drop, finishing on the last jump with a backflip tail whip. 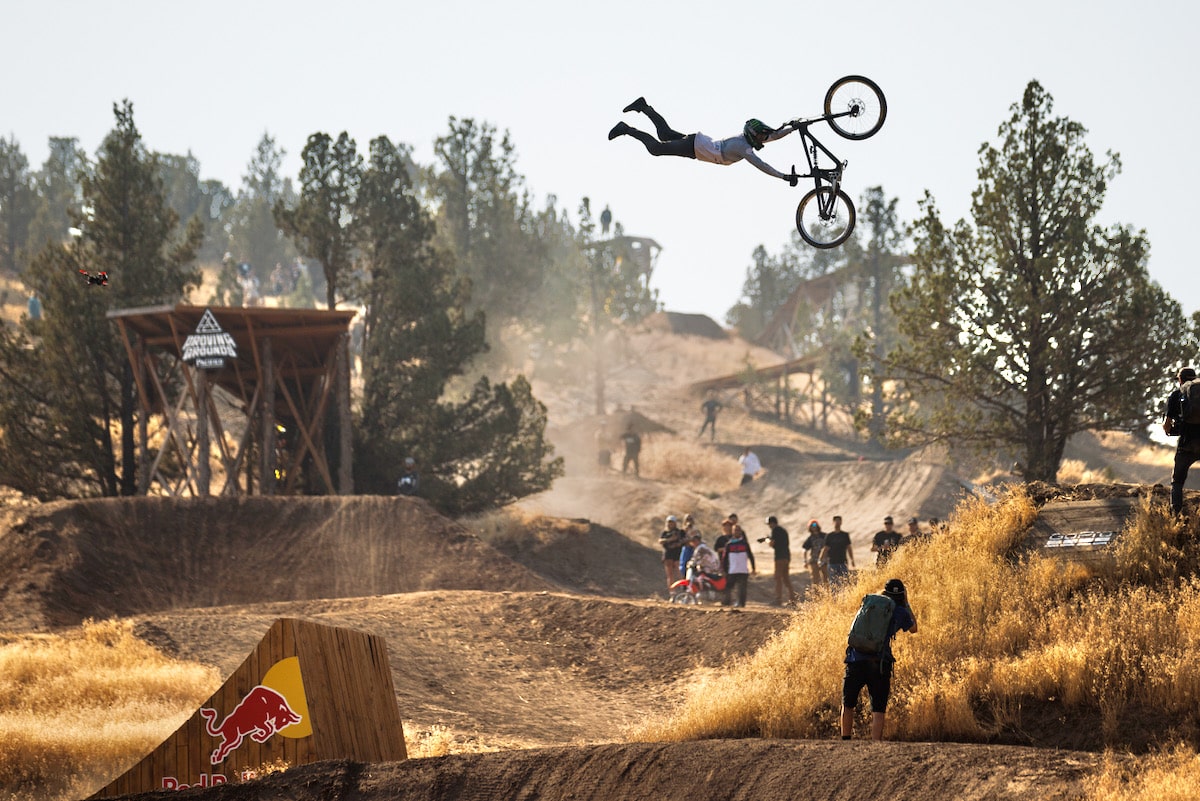 Rheeder shared that he now has different goals coming into competitions, “It’s me against myself. Today I battled myself and I won. And it happened to win the contest—which is sick. But I wasn’t prepared to go and try to battle it out.” He added, “Seeing everyone again and seeing freeride mountain biking right now, all the spectators, everyone here—that’s the most important thing and that’s the reason I came, so the win, that’s the cherry on top of the whole experience.” Rheeder also had enthusiasm for his single crown fork, “Now I get to implement the riding I used to do in slopestyle here on a freeride bike and it’s super exciting. It’s like the most exciting thing to take all that experience and knowledge and put it into this new thing, which is Proving Grounds.”
Dylan Stark, who has a BMX background and is newer to freeriding competition taking a surprise third at Proving Grounds in 2021, moved up the podium to second place this year with a score of 92.25. His tricks, including a stylish 360 off the shark fin and massive 360 at the bottom jump with a lighthearted middle finger to the judges, paired with his color and joy also won him the i9 Heart & Soul Award. In his second run, Stark rode to the top on an e-bike and with a break in the wind, decided to take it for a lap for fun.
After a tough first run, Spain’s Bienvenido Aguado Alba finished his second run both in third place and complete disbelief earning a score of 91.25. Coming off major injuries including a broken tibula and with a background exclusively on dirt jumps and slopestyle. He brought a bag of tricks as he stepped out to bigger features with a 360 off the Meat Cannon and Superman on the Canyon Gap. Nicholi Rogatkin took home the Backcountry Best Trick for throwing down a cash roll mid-run, this frontflip 360 is a go-to, big trick for the veteran rider. 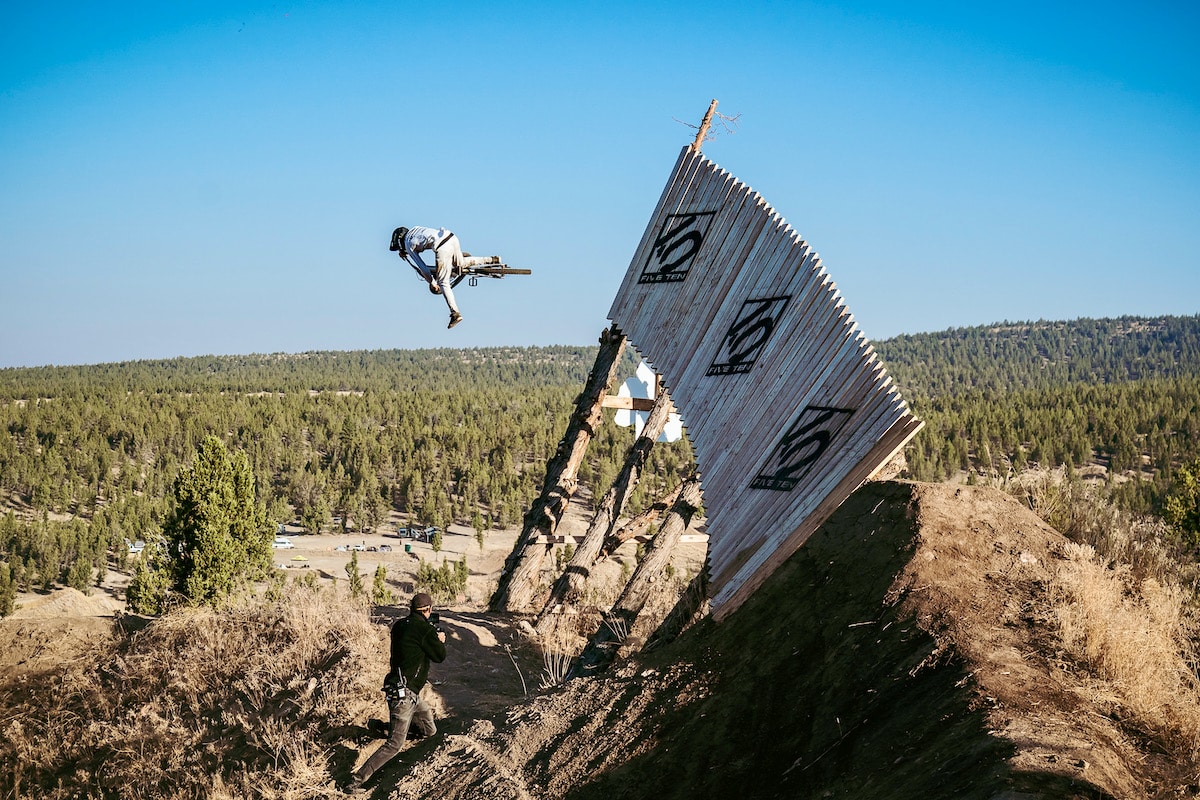 Photo by Chad Chomlack/Natural Selection Proving Grounds
In the women’s field, last year’s winner Camila Noguiera returned confident and ready to go big. She left it all on the course, tackling huge features from top-to-bottom and earning the claim as the lone woman to hit the 26-foot Bomber Drop at the bottom. “I wanted to do something gnarly and was looking for the last big drop. I’m strong and can do big things and that’s what I did. My focus was on doing a huge line with the biggest features.” She earned the top women’s score of 82.75 and the i9 Heart & Soul Award.
Casey Brown, the first woman to ride Proving Grounds in 2019, picked up second place with a score of 80.50 on her second run and the Pacifico Best Style award for the day. She charged with amplitude and smooth style, hitting the big hip up top and going deep off the final jump. Vinny Armstrong took third for a score of 78.75 with flowing runs and, as the smallest athlete in the event, she handled the late morning wind and looser dirt confidently making the massive jumps look even bigger. 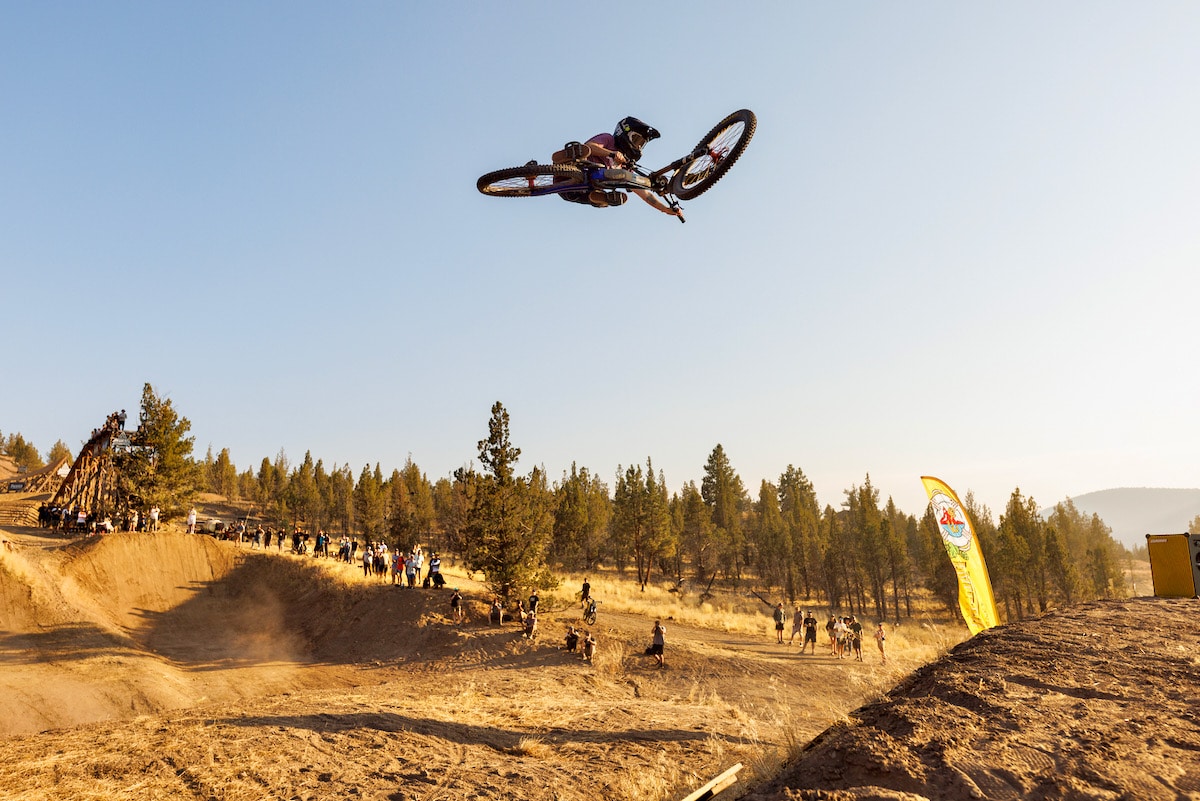 This is the first bike event under the newly-formed Natural Selection Tour and Proving Grounds partnership. Travis Rice, professional snowboarder and Natural Selection Tour co-founder says, “There are a lot of parallels to what led us to create Natural Selection Tour including a need from the riders, the industry and culture. With Todd Barber at the lead, we decided to partner with Proving Grounds because we see incredible potential for what this event is and what it can be.” Rice adds, “Today was completely incredible, and ultimately we are just here to support this event and the riders, and appreciate that working together we all have better chances to succeed in realizing the vision for the future.” 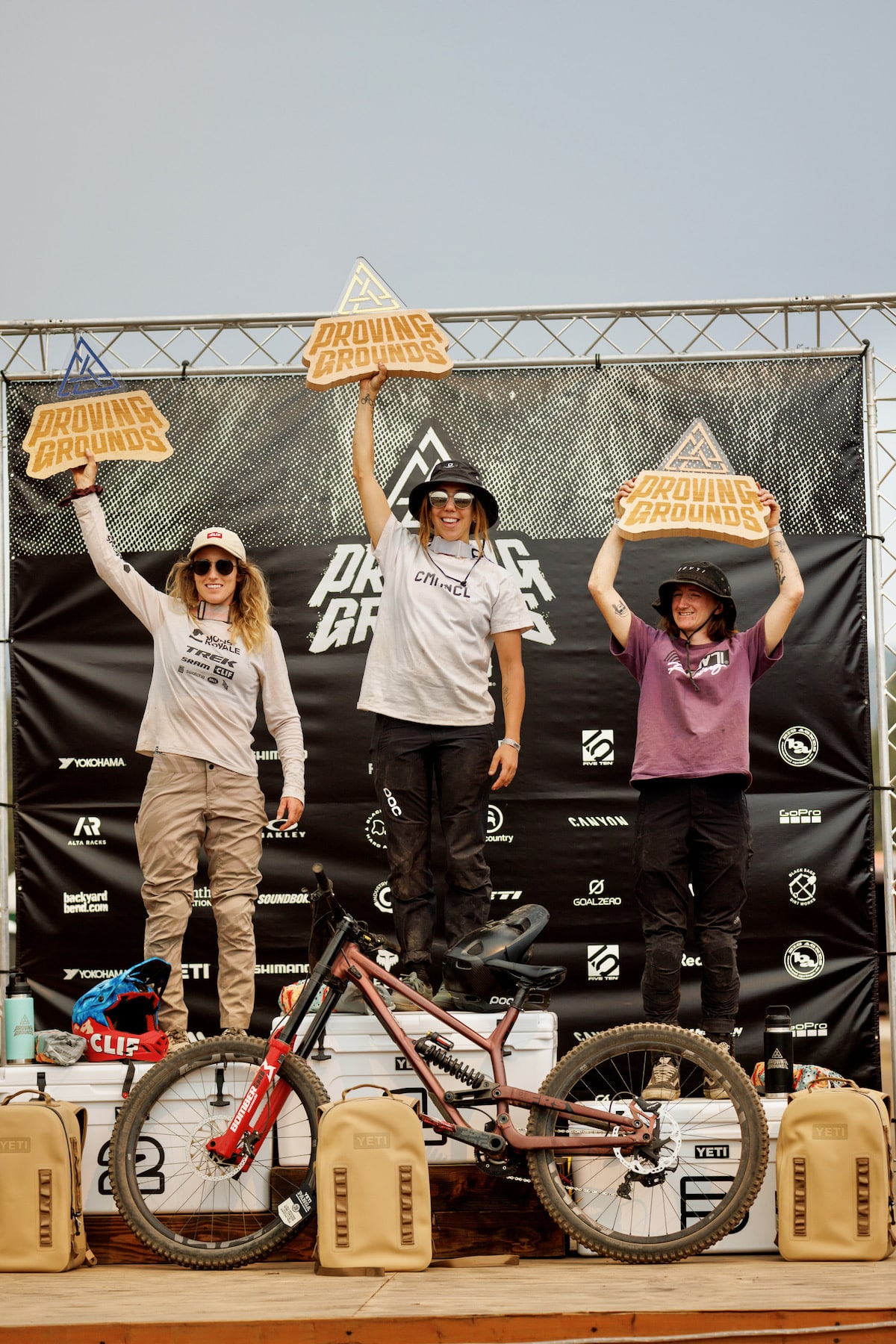 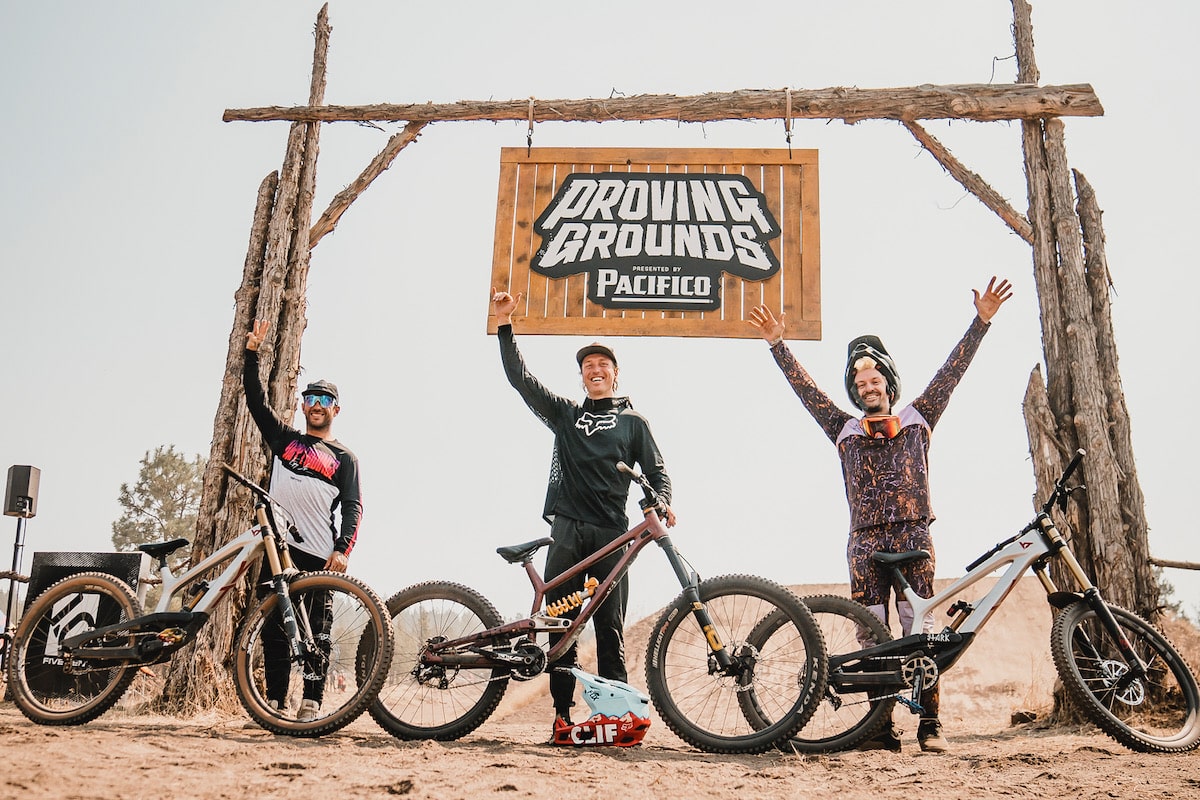 About the Natural Selection Tour
The brainchild of snowboarder Travis Rice and shared vision with the broader snowboarding community, the Natural Selection Tour showcases the world’s top riders from Olympians to big mountain film icons all competing on the planet’s most exciting natural(ly) enhanced terrain. Dream venues, a head-to-head format and no practice runs are part of the dynamic components that will keep viewers on the edge of their seats. With a mission to inspire people to forge a deeper relationship with Mother Nature, the Tour stages in iconic venues across North America. The Tour culminates with the crowning of a men’s and women’s champion; the best all-mountain freestyle riders in the world.
In spring 2022, Natural Selection Tour partnered with Proving Grounds to support freeride mountain biking’s rider-driven revolution.
Share FacebookTwitterEmailReddItLinkedinPinterestTelegramWhatsApp

COME TO THE MOUNTAIN BIKE HALL OF FAME INDUCTIONS NEXT MONTH IN FAIRFAX, CALIFORNIA

VIDEO: EDDIE REYNOLDS BRINGS STYLE AND SO CAL VIBE TO “THE GOOD DAYS”