ROTORUA, NEW ZEALAND November 11, 2022 — Day eight of Crankworx Rotorua brought a battle of the elements with the RockShox Rotorua Downhill event. With 75 mm (2.95 inches) of rain, and wind at the top, riders treated this more like a survival challenge than a typical race run with more tripods than the media crew. From seeding ’til the end of the elite male race runs, the rain came down hard, the ruts were deep, roots were exposed, mud bogs everywhere, and even a newly coined spectator feature called “Heckler’s Puddle.” It was a tough battle out there for riders to keep things rubber side down, and the fans were absolutely loving it. 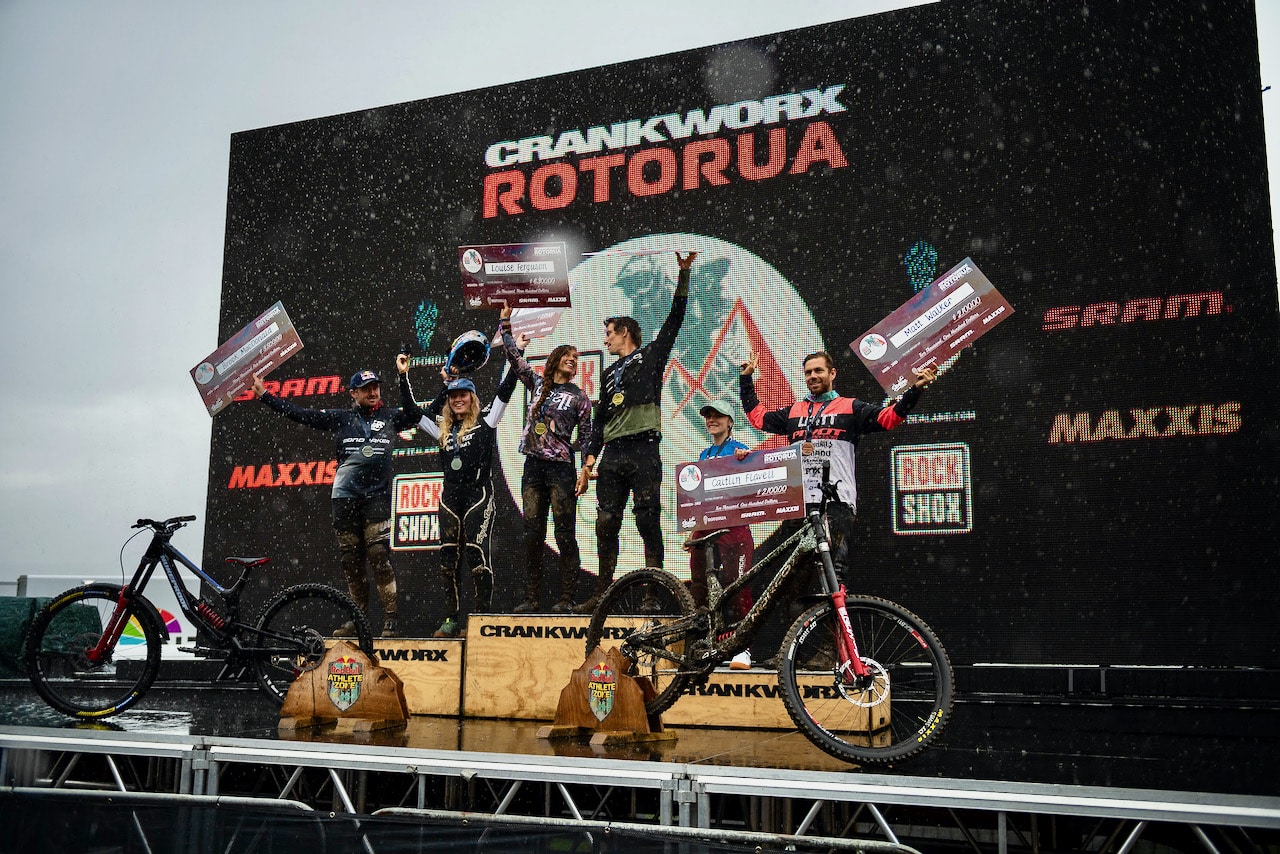 The rain didn’t dampen the enthusiasm of the Roturua Downhill winners. Photo by Jay French 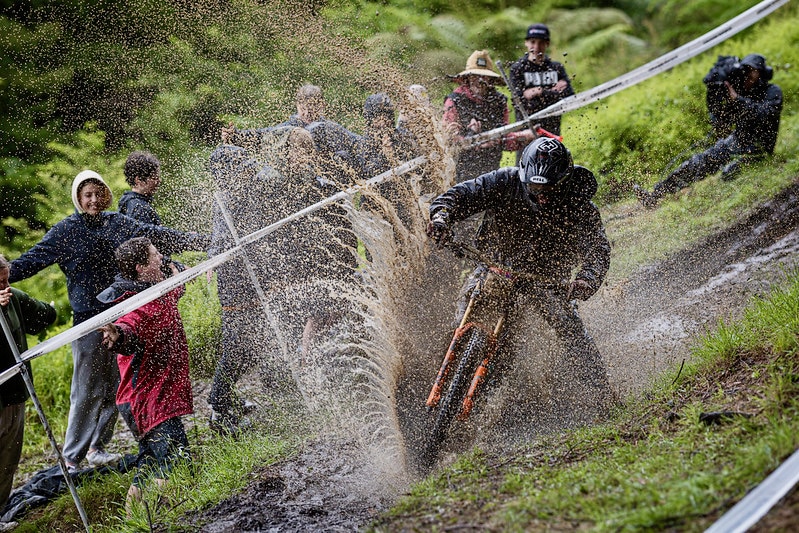 “I don’t think you could call it racing, I was just trying to make it down,” the modest Hastings said of her race run. “I just tried to take the easy lines and the low lines and just not slide too much. If it goes wrong, it goes wrong, there’s not much you can do about it but I managed to keep it almost rubber side down the whole way.”

The two Kiwi riders were no match for the fastest qualifying elite female, Louise Ferguson, who dominated with confidence while attacking every section of the course. The Ilabb rider ran an absolute clinic on how to ride in the wet and gnarly, taking the top step from Hastings by over 22 seconds. 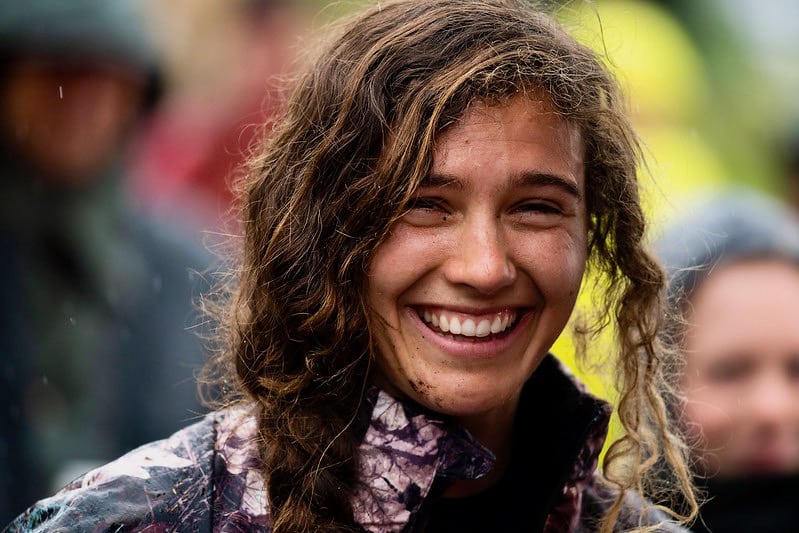 “I think coming from Scotland really helped me with these conditions. The track was sick but it was crazy slippery. We’ve had pretty constant rain all day and yesterday as well so it was changing every run and I’m pretty used to that from back home. The ground’s really soft, there’s loads of ruts and off camber roots so I felt pretty at home! It wasn’t really one of those tracks you just have to ride, you can’t really race it.”

Onto the Elite Male category, Brook MacDonald held the hotseat position for most of the final 14 elite male race runs. MacDonald had some issues in seeding earlier, but he rode his race run with so much power, carrying such good speed through the larch section. 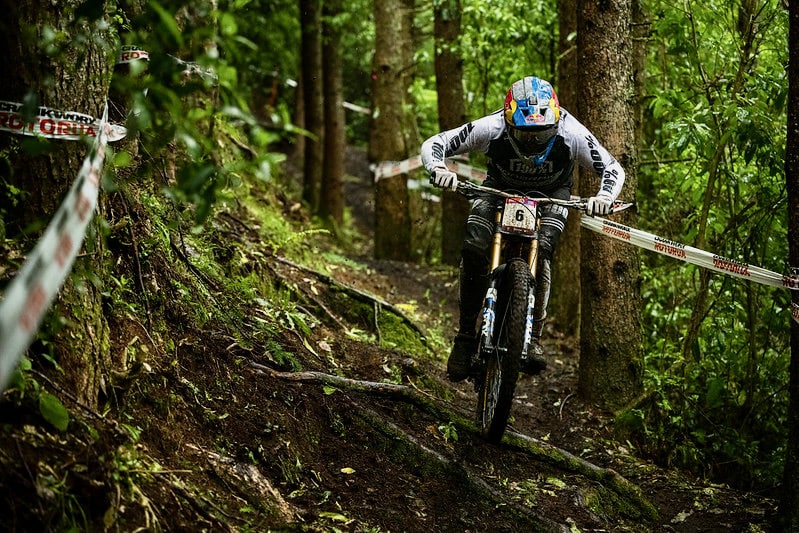 “To be honest, I had a pretty clean run, nothing too crazy so I just wanted to get from top to bottom clean and put together a safe run,” MacDonald said of the difference between his seeding and race run. “I definitely think the conditions are changing from when I came down to now. I think it’s getting a lot more techier, the top is super windy.”

Fellow Kiwi rider, Sam Blenkinsop, had what it took to knock the Bulldog out of the hot seat. It was quite a ride from Blenki, going full gas, especially through the bottom section. 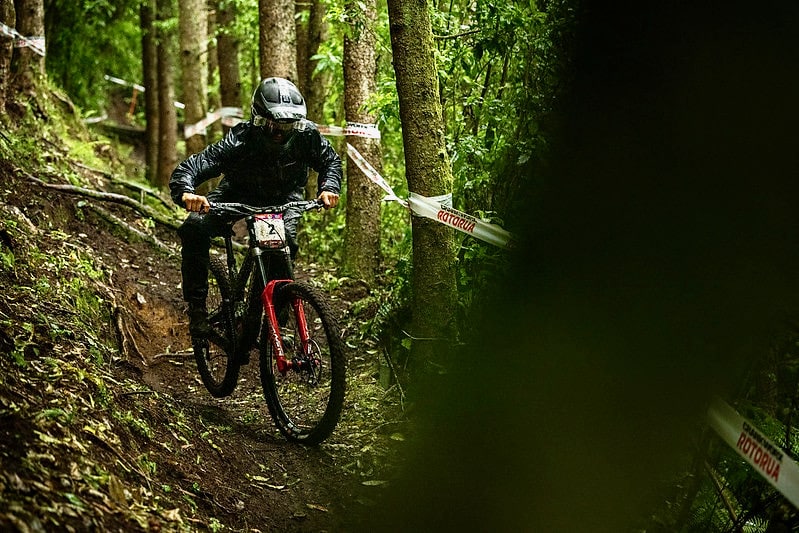 “Oh man, it started off feeling like I was going backwards, but I survived and that’s pretty much what I wanted to do,” the RockShox athlete said of his winning run down the muddy track. “I was pretty scared in a lot of places and thought ‘if I crash, I crash, and it’s kind of wet so you would slide out of [it], so I probably wouldn’t break anything, so I thought I would just let it go and have fun. We had no rain then for that race run so it was pretty good to not have to pull any tear-offs or roll-offs. It was probably the only time I didn’t have to do any of that, so it was pretty fun. It was good to see all the spectators up there in the mud hole where I almost lost it but yeah it was fun. I loved it.”

The true heroes of the day were all the locals and kids getting amongst the wet, muddy, good times along the race track. 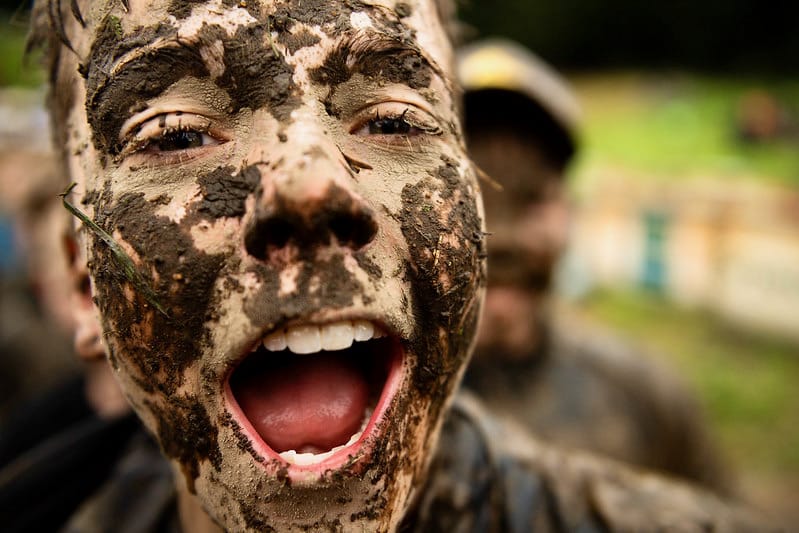 The kids along the course seemed to love the conditions. Photo by Jay French

“I saw all the kids hanging out in that huge puddle and when I came down seeing that, I just knew I needed to make a big splash,” Blenki said of the fans. “It’s cool to see the fans loving it even in these conditions with the rain and not being the warmest so it’s good to see the fans and heaps of them on the trail as well. It’s so cool to see everyone out here loving it.

After the downhill ended, the Queen of Crankworx overall standings created a tie between Caroline Buchanan and Jordy Scott with 826 points each, as Vaea Verbeeck maintained the third-place position with 772 points. After the downhill, the King of Crankworx leaderboard showed Sam Blenkinsop in second position, thanks to the 100 points from his downhill win on Friday. That put Blenkinsop 6 points ahead of Jackson Frew, and 127 points behind points leader Bas van Steenbergen.

The Speed and Style event would determine the winners of the King and Queen of Crankworx.