Trek Factory Racing’s Harriet Harnden made it two EWS wins in back-to-back weekends by taking the win in the USA at EWS Burke – round five of the Enduro World Series 2022. And home-nation hero Richie Rude (Yeti/Fox Racing) resisted the pressure from resurgent Canyon-Collective rider Jack Moir to demolish the pro men’s field in the final two stages of the race to emerge as the victor in front of his family and friends. 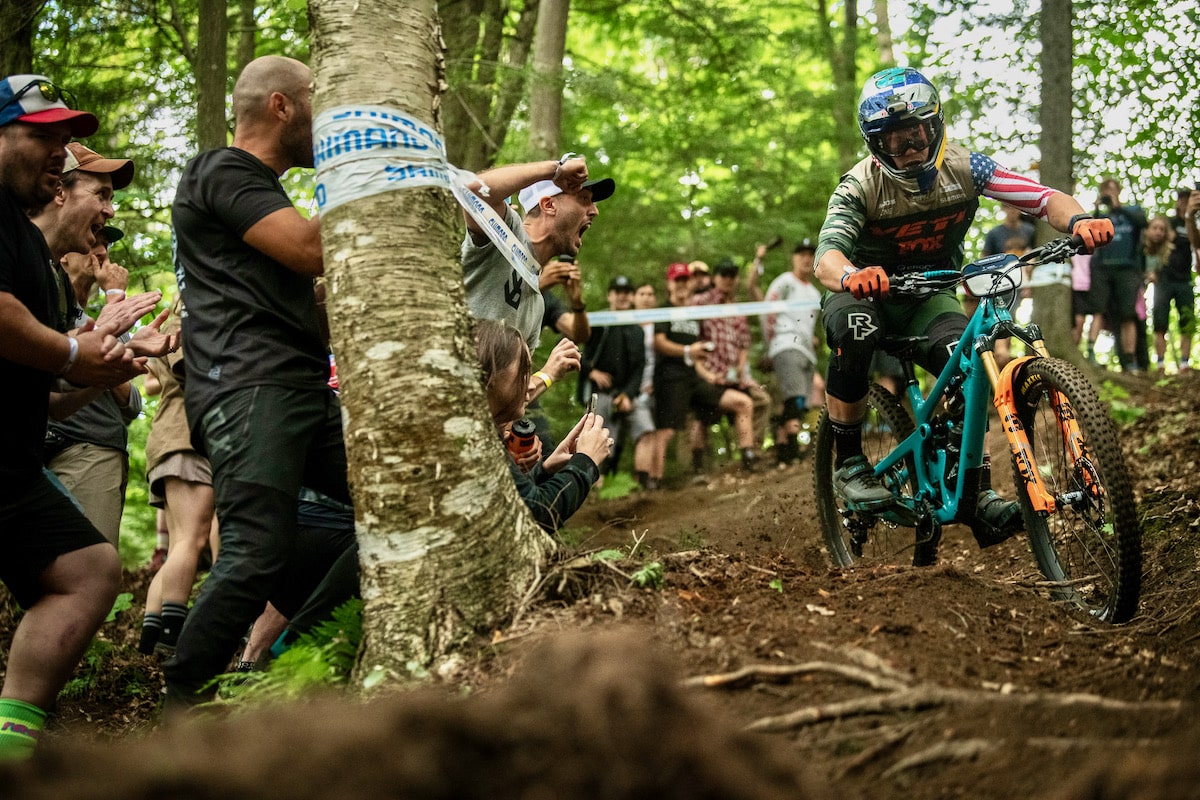 Richie Rude came from behind on the last day to win the final two stages and take the overall victory. Photo by Dave Trumpore

The UK’s Harnden started Sunday in fourth place after ceding nearly eight seconds to her hard-charging compatriot Ella Conolly (Canyon Enduro) in the Pro Stage on Saturday afternoon. However, the XC and CX star wasted no time in stamping her authority on the race on Sunday morning – winning the super-physical stage two by more than 17 seconds over fellow Briton Bex Baraona and taking 22 seconds out of Conolly to take a race lead that she wouldn’t lose all day. Harnden would take two more stages during the day with a significant 10-second win on the Queen’s Stage leaving her in a commanding position carrying a lead of more than 35 seconds into the final stage. And after winning last weekend in Whistler, Canada, Harnden made it four EWS career wins by finishing the final stage in second to take the overall by 32 seconds from France’s Morgane Charre (Pivot Factory Racing). Britain’s Bex Baraona (Yeti/Fox Factory Racing) came in third. 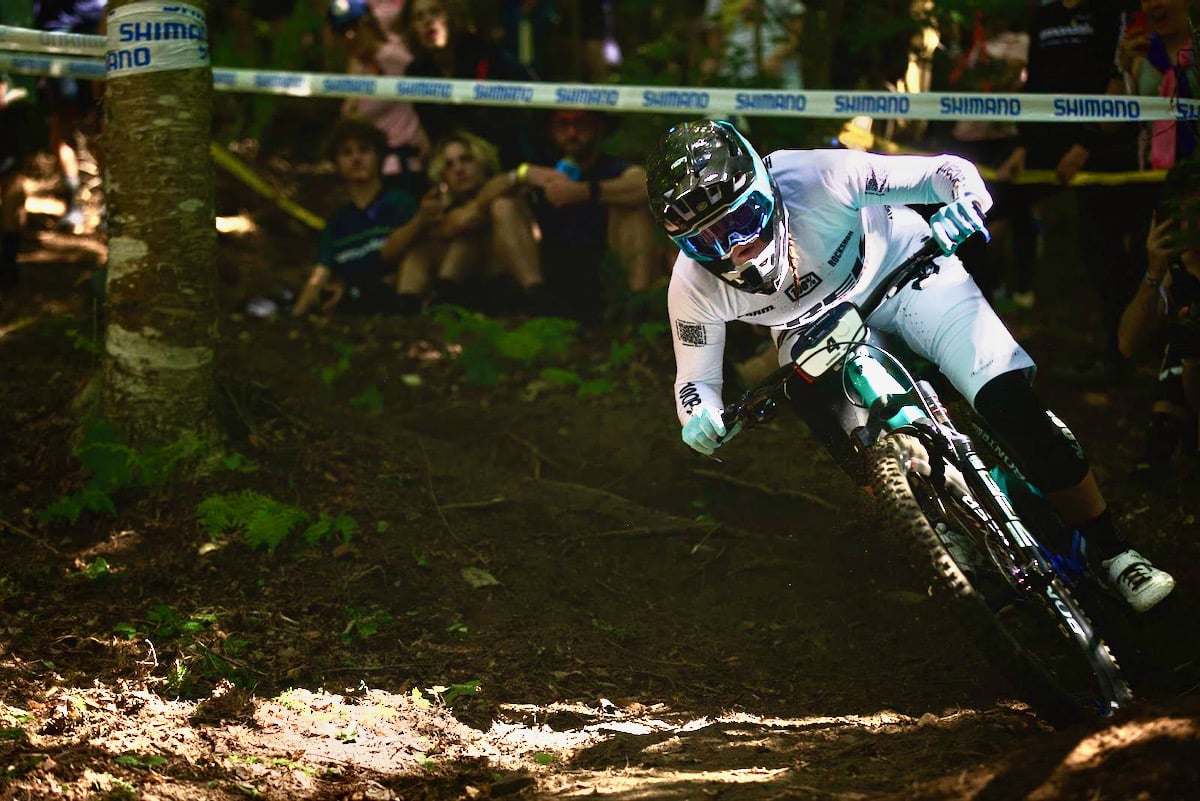 In the EWS Men, it was 2021 series champ Jack Moir who set the bar sky high by winning the first four stages in front of a hugely-vocal Burke Mountain crowd in the eastern U.S. state of Vermont. Times were tight though and Moir, who struggled to find his usual form at the start of the 2022 season, went into the final two stages of the race with just a 5-second lead over a consistently fast Richie Rude. Whistler winner and series leader Jesse Melamed (Rocky Mountain Race Face) had three second places on stages and one third place but couldn’t really challenge Rude and Moir’s dominance. In the end, Rude was too strong for anyone. The Yeti rider, who lives just four hours away in the state of Connecticut, clawed back five seconds on Moir on both the Queen’s Stage – Stage 5 – and the final stage to finish the race as victor in front of a massively vocal crowd that included his 90-year-old grandmother and parents. 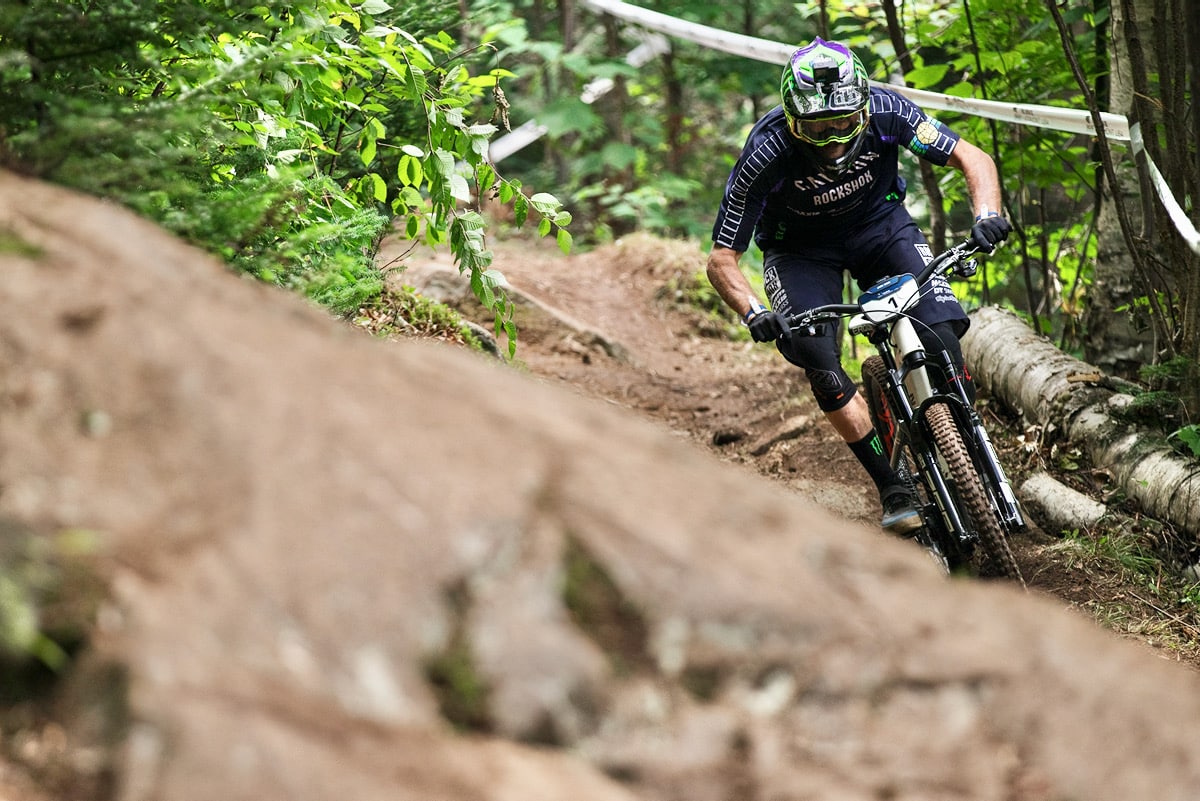 Jack Moir had a good weekend, winning four of the six stages, but came up just 4.91 seconds short of the overall win in a field of over 100 pro men. (Photo courtesy of Enduro World Series)

Here are the overall results for the top ten men and top ten women: 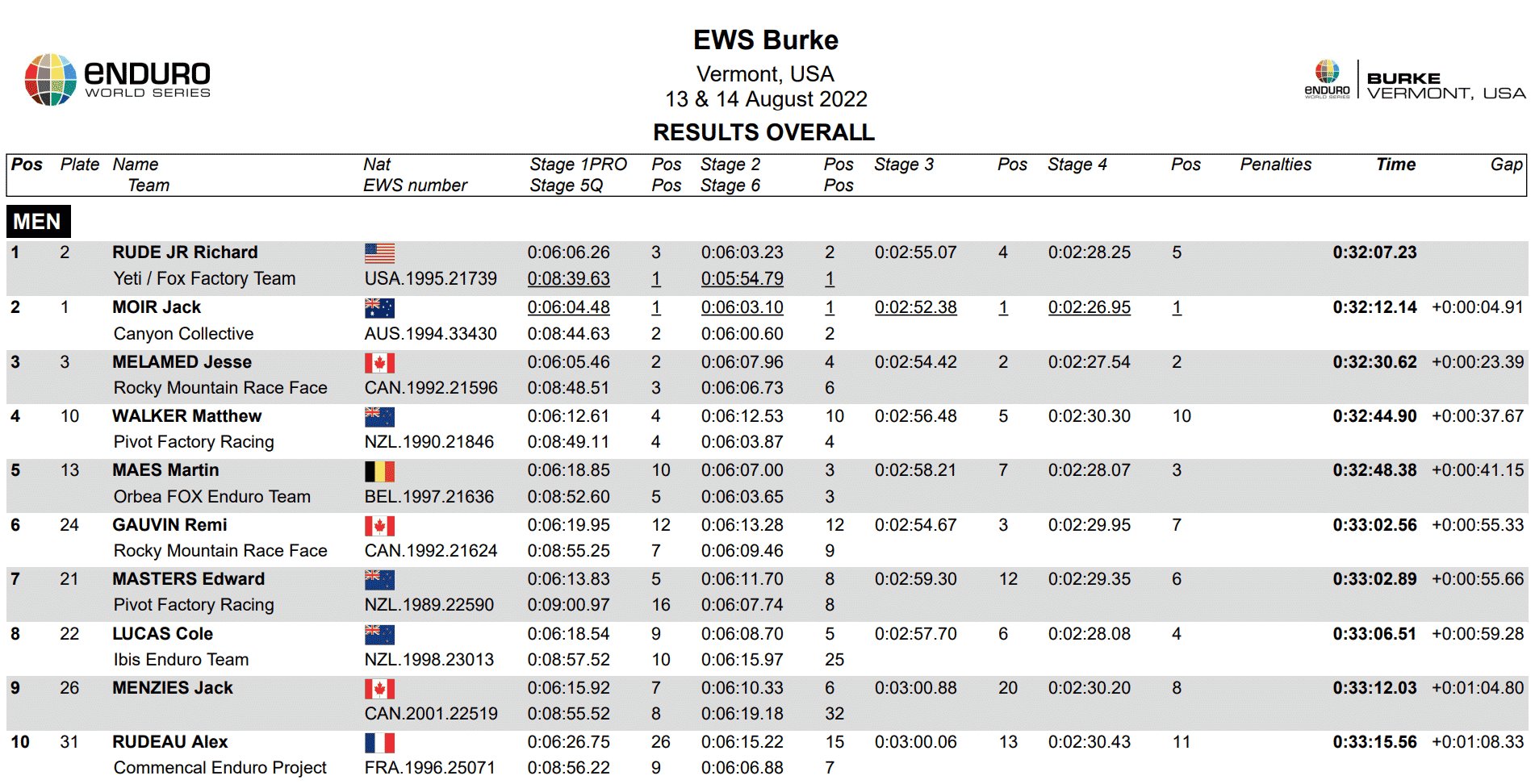 In the U21 Women it was a win for Italy’s Sophia Riva ahead of Paz Gallo Fuentes of Chile and the USA’s Lauren Bingham.

In the U21 Men, Australian Luke-Meier Smith (Propain Factory Racing) posted an overall time that would have left him ninth in the senior men’s field. Second was his countryman Ryan Gilchrist, and Whistler second-place finisher Canadian Emmett Hancock was third.

In the Master Women 35+ it was Dane Sandra Thomsen who took the win from Melissa Newell of New Zealand and the USA’s Kristine Contentoangell.

Master 35+ Men was a French 1-2. With Franck Strack taking a convincing win some 90 seconds ahead of Karim Amour (BH Enduro Racing Team). Mads Weidemann of Denmark was just under six seconds back in third.

The dust has hardly settled but riders will already have next weekend – August 20/21 – in the crosshairs and the sixth round of the series, a couple of hours north at EWS Sugar Loaf across the state line in Maine. The course maps are out and excitement is building.

EXTENDED UNTIL SEPTEMBER 1ST: TAKE OUR READER’S SURVEY FOR A CHANCE TO WIN A FREE PIVOT MACH 6!