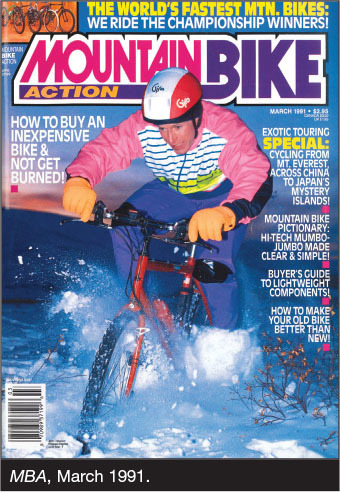 Our March 1991 cover featured a Gregg Adams photo of a mountain biker riding through the snow on a fully rigid bike with normal-sized tires. The fat bike revolution had yet to arrive back then, so riders who went for rides in the winter did so on their regular bikes. Suspension was still a rarity, too.

We had an interview with Canada’s Cindy Devine, who had recently won the women’s title in Downhill at the 1990 UCI World Championships in Durango, riding a Klein hardtail bike with Rock Shox forks. Devine had previously won the Mammoth Mountain Kamikaze Downhill as well as winning the Canadian National Downhill title and placing third in Canada’s XC ranks.

In keeping with the times, she raced the same bike in the downhill category at the Worlds as she did in the cross-country event. We included a spread shot of her race bike in the issue, along with spread photos of the bikes that Americans Ned Overend and Juli Furtado rode to their XC wins in Durango, as well as the one that Greg Herbold rode to the Men’s Downhill title. 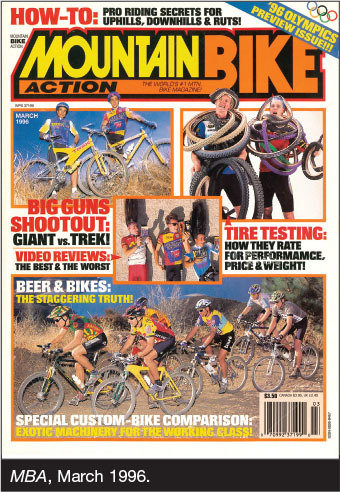 Our March 1996 issue included a test that we conducted of how drinking beer affected a person’s riding ability. Our two volunteer test riders, one of whom was assistant editor Mike Cushionbury, took laps on a short test course after drinking cans of beer in order to see how much the alcohol would affect their riding. Although one beer didn’t seem to affect their performance too much, they kept drinking and going through our tests after each additional can. By the time the riders had drunk their fifth round of beers, their riding was seriously affected. We had to cancel our plans of having them each drink a sixth can, as their performance had suffered so much after the fifth round that it looked too dangerous for them to have any more. We don’t recommend drinking any kind of alcoholic beverage before a ride, but it was interesting to see how much of an effect a few cans of beer had on our rider’s mental and riding abilities.

Elsewhere in the issue we took a look at the 1996 Olympic mountain bike race and a test run of the course, with many of the riders expected to be battling in the race that summer in Atlanta, Georgia. Bart Brentjens, the reigning world champion, shared his predictions in MBA of who he thought were the top contenders among the men. He picked Miguel Martinez first, followed by Christophe Dupouey, Thomas Frischknecht, Rune Hoydahl, Ian Ostergarrd, Henrik Djernis, David Baker, Alessandro Fontana and then himself, in that order. As it turned out, Brentjens would win the gold in that first Olympics, with Italy’s Paolo Pezzo taking the women’s title. 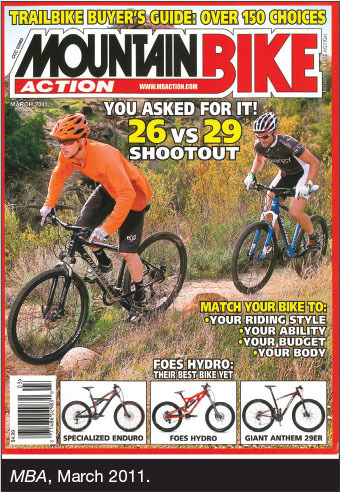 Our March 2011 issue featured a shootout of two identically priced bikes from Cannondale, one with 26-inch wheels and one with 29s. While we found the 26-inch bike to be more playful, our riders found that the many advantages of the bigger wheels made them the better choice for all-around riding. The 27.5-inch wheel size would replace the 26-inch wheels in the next few years. Today, both 29- and 27.5-inch bikes rule the mountain bike market.