30 Years Ago In Mountain Bike Action 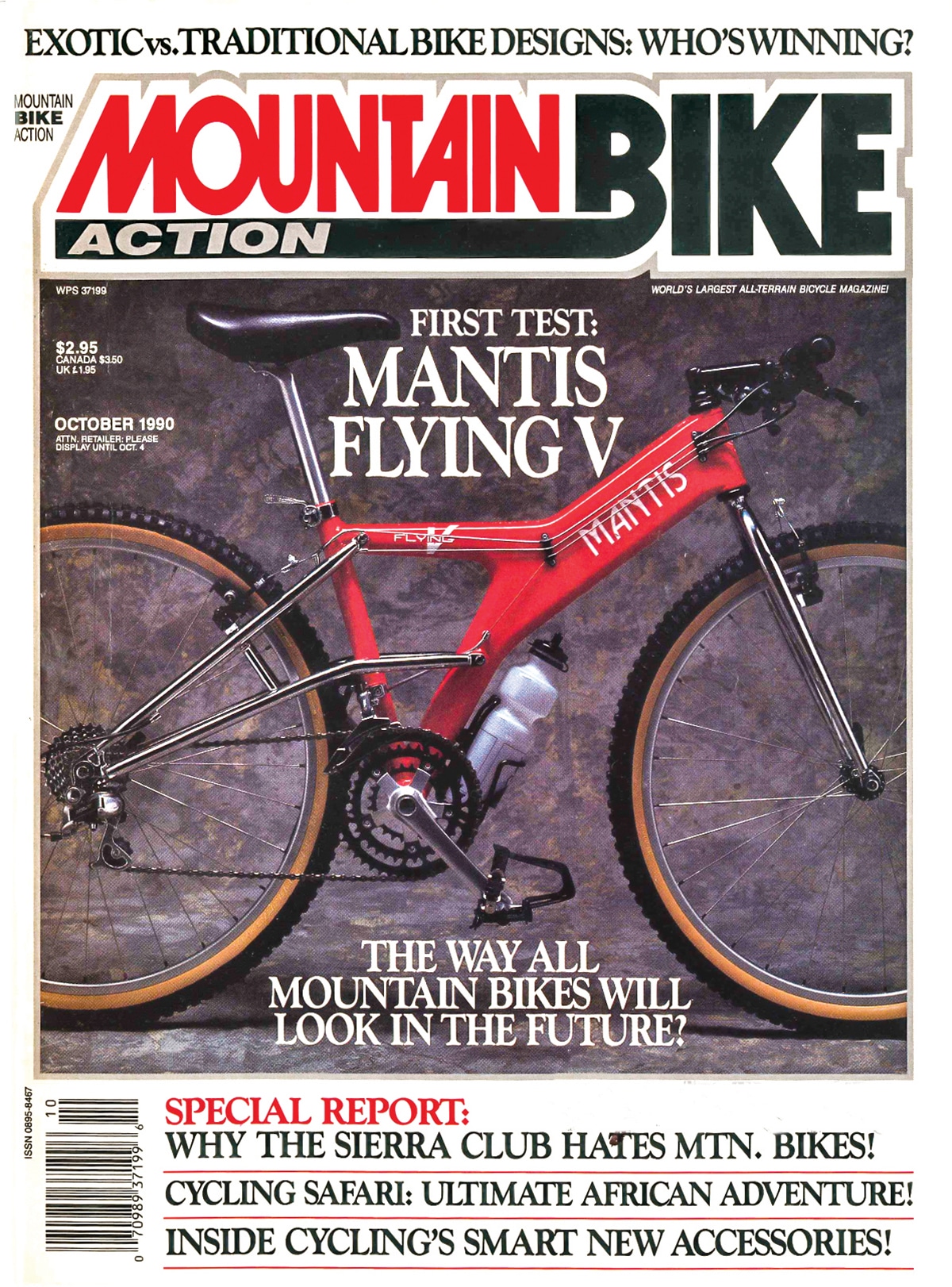 Thirty years ago we put the ground-breaking Mantis Flying V on the cover. Designed by the company’s founder Richard Cunningham, the bike’s monocoque front triangle and elevated chainstays were so influential that it looked like all-mountain bikes would soon be following those trends. We called Richard recently and asked him about those days. Richard, who recently retired from the journalism trade, says he introduced his first elevated chainstays in 1989 with his Nishiki Alien frame design. By the middle of 1990, it was looking like the whole mountain bike world would switch over to elevated chainstays, but that didn’t happen. The elevated-chainstay revolution would eventually die down, and most chainstays would go back to where they were before. Monocoque frames also caught on for a while, but that trend would die down later as well.

If you look closely, you can see that the Mantis Flying V on our October 1990 cover had a rigid fork. Front suspension was just catching on in 1990. Richard had famously dismissed the need for such things by saying something like, “I’ve got all the suspension I need in my arms and legs.” That may have been true for him back then, but other riders liked having suspension, and it quickly became the biggest trend of the next 20 years.

Once suspension started catching on, Richard embraced the idea and developed one of the most impressive rear suspension bikes on the planet, the Pro Floater. Richard recalls now that Hi-Torque’s Jody Weisel came up with the name when Richard couldn’t think of one himself. Richard says Jody told him, “We have to call it something. You have three days to come up with a better name or we’re going to call it the Pro Floater.” Richard couldn’t think of anything better, he says, so the name stuck.

Wheel technology was changing 30 years ago, too. Today, the switch to wider rims is one of the biggest innovations of recent years; however, in 1990, the exact opposite was taking place. Rims were actually getting narrower. “Keith Bontrager was the guy who started that trend by re-rolling Mavic 700c road rims into 26-inch mountain bike rims,” Richard Cunningham recalls now.

As we reported on page 46 of that issue: “In 1990, standard rim width dropped from 27mm to 23mm, and a small group of aggressive rim builders, including Mavic, Specialized, Trek and Sun, dropped into the 19mm–21mm range.” That trend wouldn’t last very long, though, as there were drawbacks to the narrower rims, and they soon grew wider again. 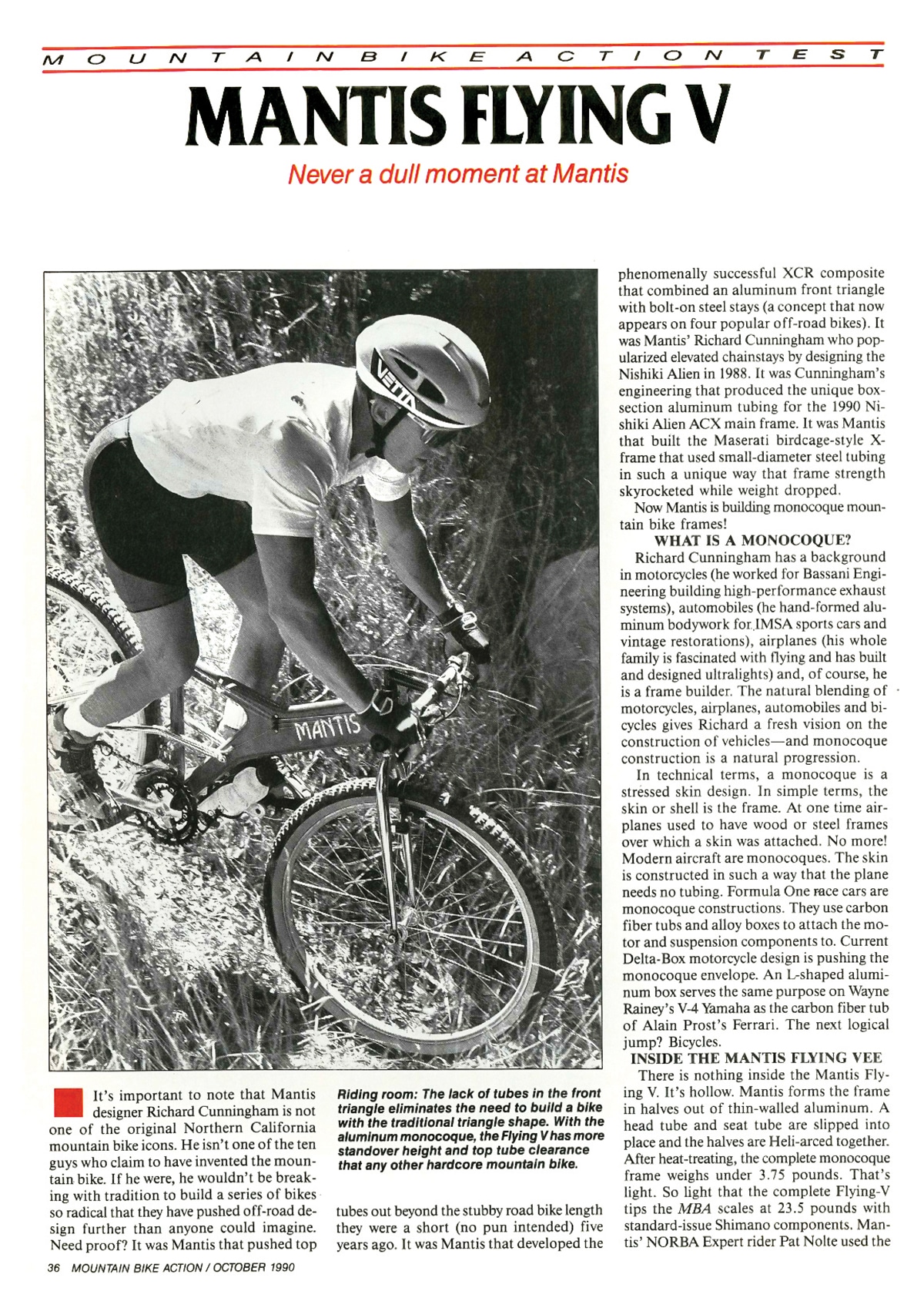 Oval chainrings were another trend that was popular among mountain bikers for a while in those days. Shimano’s ovalized Biopace chainrings of the late 1980s were falling out of favor in 1990, as riders moved back to rounder chainrings again.

Seeing how such trends have come and gone over the past 30 years makes us wonder what other developments will swing back to the way they were in the years ahead. Will the 20-year trend to bigger wheel sizes someday bring on a return to 26-inch wheels? Former XC National champion Travis Brown recently said that if he had to race today, he’d want to do it on 36-inch wheels. Should that wheel size ever catch on, it’s not hard to imagine how other riders will push to bring 26-inch wheels back again.

Elsewhere in our October 1990 issue of MBA, we presented a preview of the location where the first UCI Mountain Bike World Championships were going to be held—Durango, Colorado. There had been other mountain bike races that had used the name “World Championships” in the 1980s, but the Durango event would be the first one held by the UCI, the international body that puts on cycling’s top events.

Among the riders mentioned in that issue as contenders for the Durango event were Americans Ned Overend and John Tomac. As we know now, they would end up winning the UCI’s XC titles in 1990 and 1991 respectively, while fellow Americans Juli Furtado and Ruthie Matthes would win the women’s titles. Remarkably, Ned, who was considered “old” at the time, as he turned 35 that year, tells us that he is still racing in the pro ranks today, despite turning 65 this summer.