Europeans dominate the high-Alpine tech of the nine-stage thriller

With a crushing win on the first stage of the EWS-E Crans-Montana, Sofia Wiedenroth (Specialized Racing) set the tone for a race where the German made a hugely physical challenge look relatively easy. And French series leader Yannick Pontal (BlackBox Test Pilot Program) showed his class to battle back to a comfortable first place after a mixed bag of results in the first two of three loops raced around the Swiss resort high above the stunning Rhone Valley. 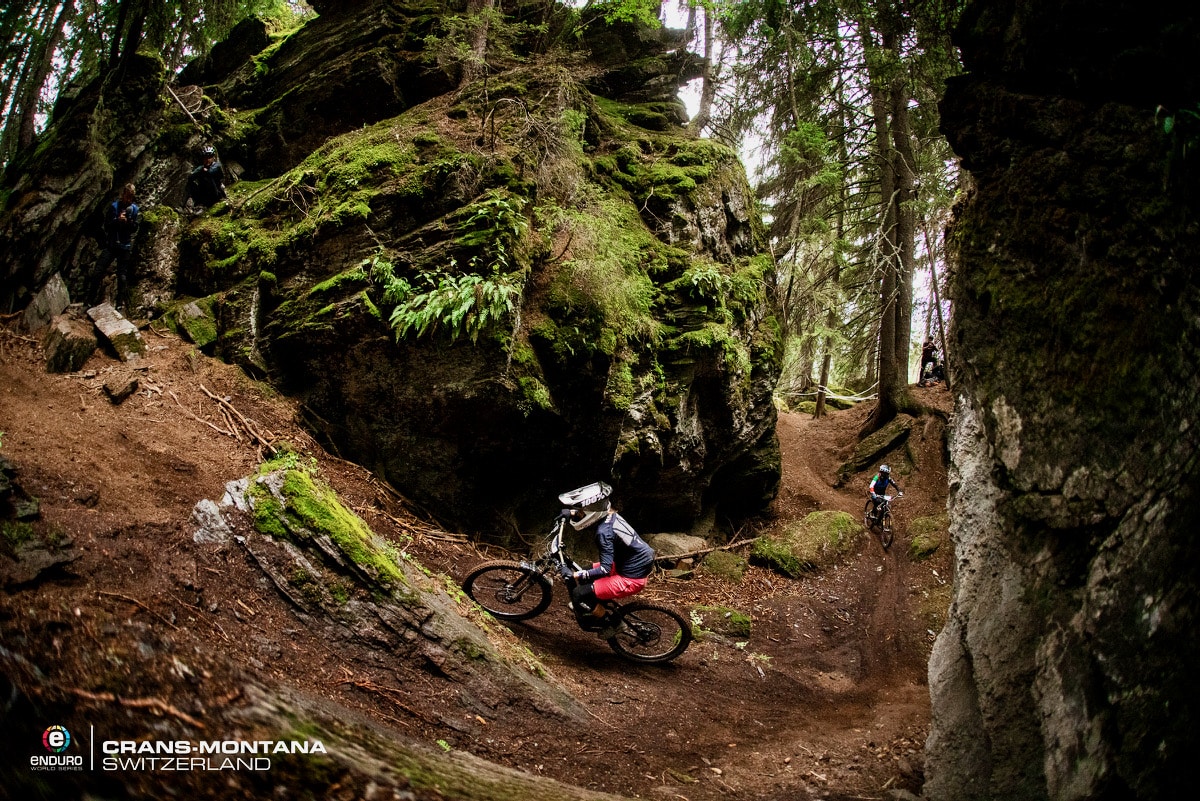 Wiedenroth showed she could win on the ups and the downs.

In the women’s race, Wiedenroth led from start to finish and the 27-year-old’s blistering times on three challenging power stages were enough to hold off a strong challenge by Orbea Fox Enduro Team’s Flo Espineira of Chile. Espineira won five of the nine stages but Wiedenroth’s margins – on the climbs in particular – left her out front by nearly 12 seconds by the close of play. Germany’s Ines Thoma – an EWS veteran – rode her Canyon to third in her debut EWS-E, smiling all the way round. Italy’s Alia Marcellini had a tougher day puncturing on S6 to end the day nearly 3:30s back.

On her way to the win, Wiedenroth, who has a strong cross-country UCI World Cup heritage, posted a time on the first power stage that would have placed her in the top 20 of the men’s race. But it will be Espineira who takes the series leader’s plate to the final of five rounds in the 2022 EWS-E at Finale Ligure in two weeks’ time after a consistent day that they brought to a close with back-to-back stage wins. The Orbea rider clawed back almost 14 seconds from Wiedenroth on the final stage – a shortened version of Saturday’s EWS Pro Stage.

In the men’s race, Pontal started the day with a fifth place on the hugely-slick challenge of Giddy Up, a series of mud-covered rocky steps that Wales’s Leigh Johnson mastered on his Pole to take the win. But the Frenchman followed up with a second place and a stage win before losing time in the middle of the race to go into the final loop – with three stages to go – in third. But it was tight and Pontal was only around two seconds adrift of UCI World-Cup DH star Antonie Rogge and Haibike’s Andre Garibbo. 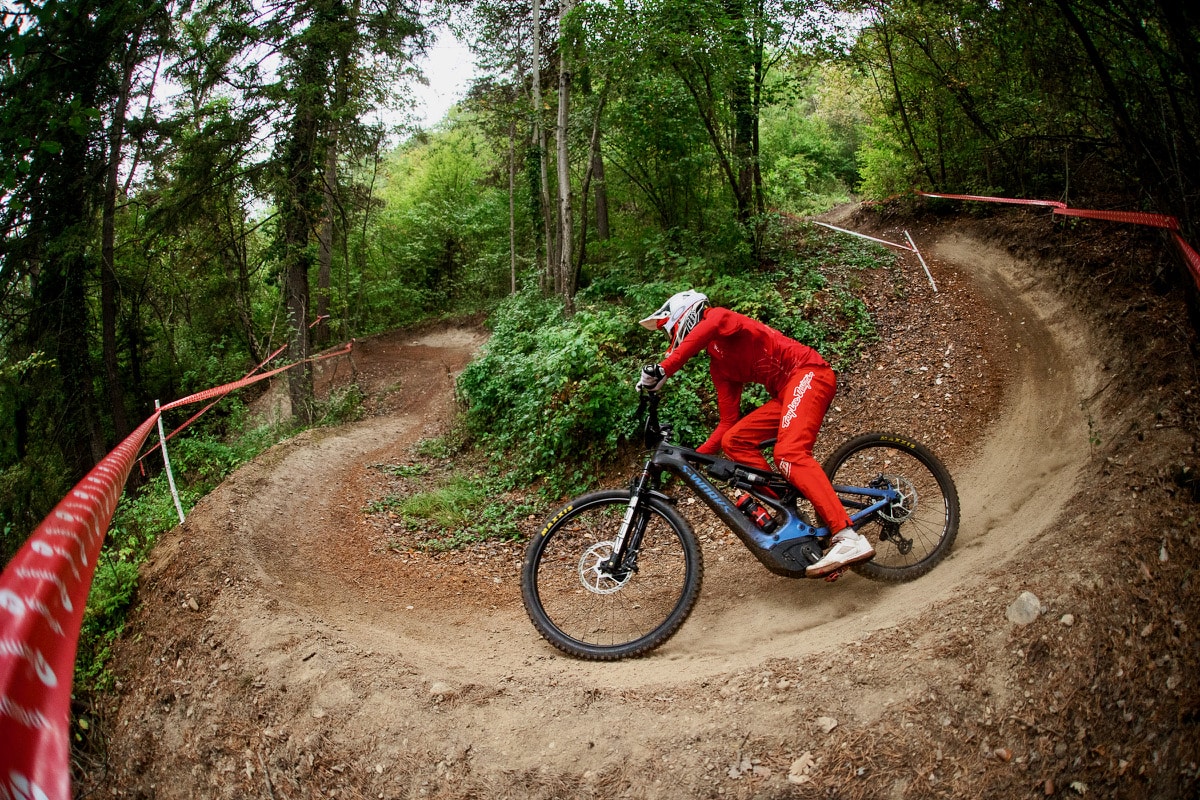 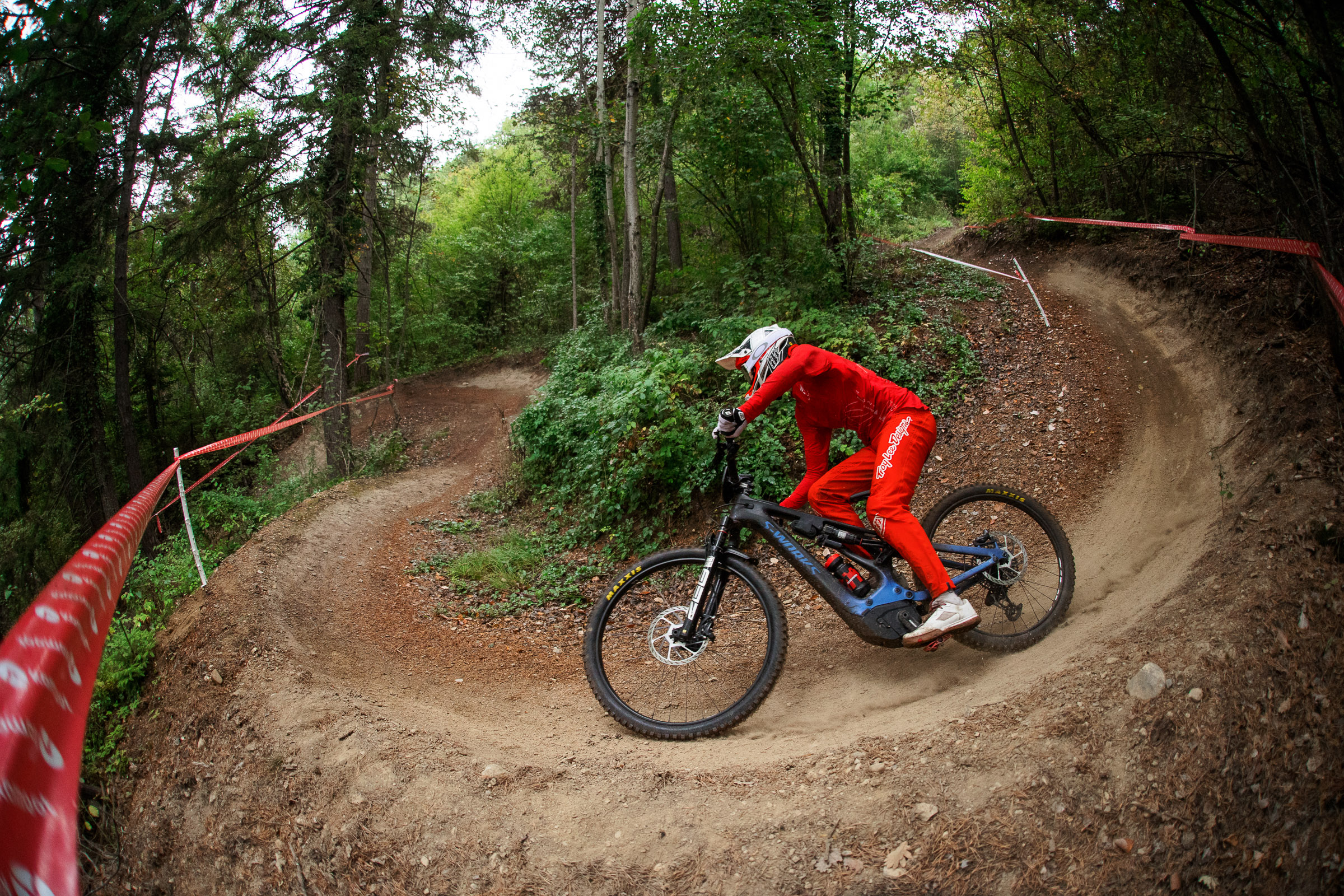 Pontal’s second EWS-E win of 2022 leaves him in a commanding position, but second-placed Andrea Garibbo will come out swinging at the Finale Ligure series decider on his home turf in two weeks.

And the series leader, who was first out of the gate, ground out a stunning win on the third power stage – S7 – a re-run of S1. Riders were dropping tire pressure on the start line as showers left the stage even slicker than on their first run. But Pontal went only a 1/10th of a second slower than on the drier course, rocketing him back into the virtual hot seat. The Frenchman followed this up with a win by seven seconds on the penultimate stage leaving him with a 13-second cushion going into the day’s final stage. In the end, he extended that lead to 17s with a fourth place on stage that saw a downhill masterclass from Antoine Rogge who took the win by some 6 seconds from the UK’s Elliott Heap (Nukeproof SRAM Factory Racing).

So, series leaders are unchanged going into the final round on the Italian Riviera in Finale Ligure in two weeks’ time. Flo Espineira leads the EWS-E Women’s series with 1745 points and Sofia Wiedenroth leapfrogs Alia Marcellini and the injured Laura Charles (Miranda Factory Team) to go into second. In the EWS-E Men’s, Yannick Pontal’s second win of 2022 establishes his position as series leader with 1840 points. Andrea Garibbo overhauls Edgar Carballo Gonzalez (Orbea Fox Enduro Team) to go into second.

The team of the day is the Lapierre Overvolt Team. Team rankings are here