A dad and daughter adventure machine 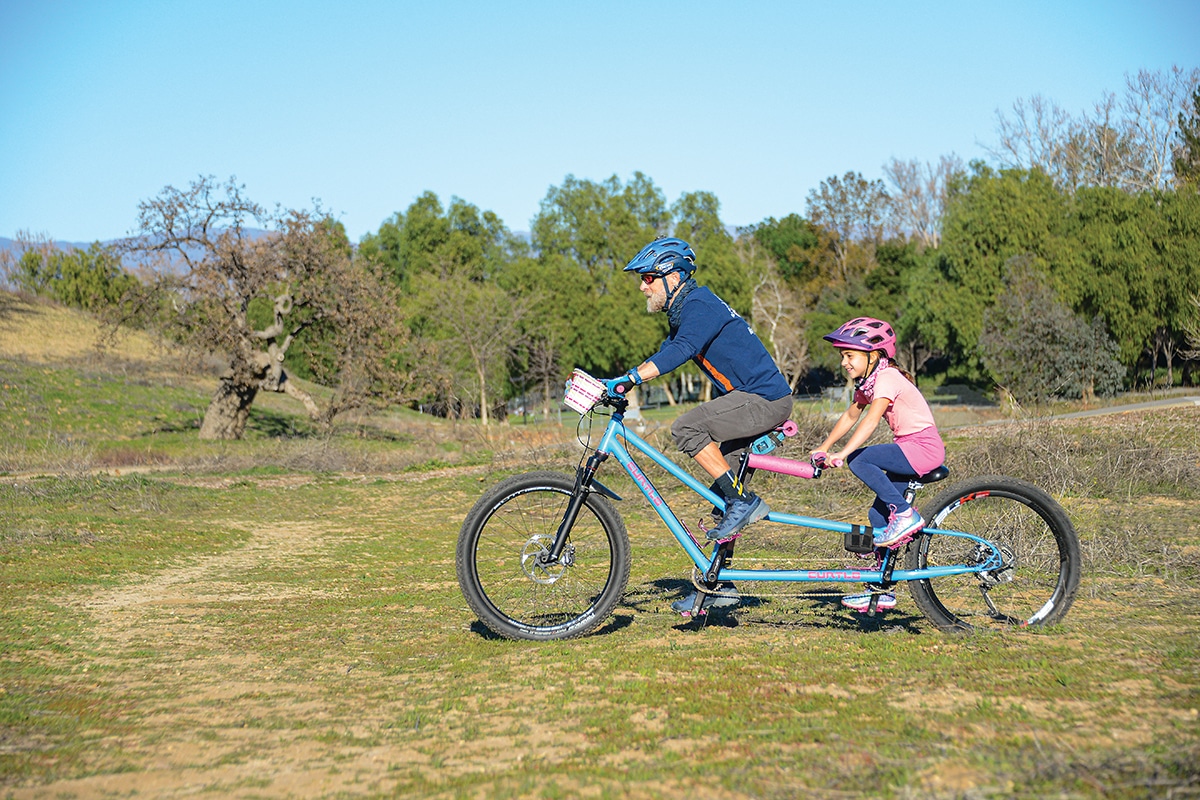 The idea for this Curtlo tandem sparked to life in the middle of a ride with my daughter JoAnn on her trailer bike. We had been pushing our limits the past few rides, and I could tell by the creaks and groans from the trailer bike and seatpost interface that I was really at the outer edge of what we should be doing. My daughter loved it all, and I wanted to continue our adventures without fear of a catastrophic breakdown. Our setup was light and easy to disengage for travel in the back of my truck, but it was time to spend some coin on our adventure bike and really solidify her skills with a custom tandem just for us.

I have raced off and on for Doug Curtiss of Curtlo Cycles for 30 years and have owned every kind of bike he makes—road, track, mountain bikes, single-speeds and a previous tandem. I knew that with his experience and skill set he could take my design desires and fix all the things I did not know would not work. I called, and we had a few discussions before I sent my basic list of features. At the time, I wished I had more money for the project to afford the Ventana full-suspension rear end in the hopes of really making our adventures as enjoyable as possible for my daughter. Then I realized that she was too small for the full-suspension rear end to work. As it was, I was asking for the rear end to be so short and so low because I knew that in our first eight months on the bike, her seat was below the rear tire top and had to be all the way forward on its rails to not rub the tire.

My design was for a stable and comfortable tandem that would allow for the growth of my daughter (more on the adjustable stoker stem design from Doug later). I thought a tall head tube would put me upright and allow me more ease to hand things to my daughter and to continue our pattern of high fives while riding. Doug reigned in my head tube length idea by an inch, and it turned out to be a very thoughtful alteration. I wanted a 130mm fork and a 68-degree head angle with a 75-degree seat angle. I was not sure how to space out the stoker positioning and asked for more of Doug’s guidance, which again demonstrated his experience and understanding. I asked for a number of bottle cage options, thinking of big adventures and storage needs, which he gracefully included. I had the rear end set up with old-school QRs and spacing, as I had hoped to do an overnight trip with my BOB trailer carrying our gear, but it has not happened yet, and I still hope for it.

This build uses a lot of random components that I already had from other bikes: an FSA 27.5-inch rear wheel, captain cranks, a seatpost, bars, and the most perfect tires donated by Panaracer specifically for this tandem—3.5-inch-wide FatBNimbles. I was committed to Shimano XT brakes, a Stan’s front wheel, and used an Answer suspension seatpost, which unfortunately could not be used for the first 18 months, as its minimum insertion was too tall for my daughter. My wife and I are not tall, and our daughter has consistently measured in the bottom 5 percent in height and weight for her age, so she is quite little.

Next, I wanted a color-coordinated bike. My wife Anna and my daughter liked this periwinkle blue powdercoat that I also loved, and they pushed me to search for pink components—a Chris King headset, cheap pink pedals, saddles, bottle cages and grips. Then I included some mismatching bells that were floating around in my parts bin. Thanks to 1x drivetrains, I did not need tandem-specific cranks and purchased the shortest non-custom stoker cranks I could find.

I added pink closed-cell-foam float tube pieces to pad parts of the rear end, because on one of our first rides, we hit an odd series of bumps that pushed/bumped JoAnn up off her seat and into the back of my saddle with her forehead. Tears were shed, but I had a plan before we started pedaling again. The pads are there, but thankfully they have not been needed again. The best part is I had the pink floaty tube already in my garage, and it matched perfectly.

The best and worst part of this tandem journey is that my daughter loved riding and particularly liked getting picked up from school on this bike. Her school is two miles all uphill from our home. No problem really, and it afforded us a number of fun options back; my favorite is Aliso Canyon, a beautiful fun run with some singletrack or fire roads and my daughter’s favorite rope swing. In the process of all of our rides and her mastery of riding, she began to want to ride her own bike. She had built the skills and fitness to easily ride her little pink 16-inch-wheeled bike with aplomb. She quickly began doing tricks like riding and balancing on one foot on her saddle while lifting her other up in the air behind her, wowing and simultaneously scaring the neighbors.

She had the confidence and wanted the tandem less and less. I understood and tried to find creative options. Riding to get frozen yogurt was the only option other than riding to school. Now she wants to ride her mountain bike to school, which I fully support and facilitate: you should see me riding up with her pink backpack on. So, my goal to instill and establish cycling proficiency worked and relegated this beautiful tandem to less and less frequent use. My daughter now has her own Redline mini, a Jamis mountain bike, and just graduated to a 30-year-old Specialized Stumpjumper comp M2 that she loves because it is so much lighter than her 24-inch-wheeled Jamis. Our rides on the original trailer bike set the tone, and the rides on the tandem reinforced her mastery, confidence and independence while riding. If anyone reading this hopes to follow this path we’ve tested, I highly encourage it, as I witness my daughter’s confidence on the bike and, on this planet, grow to new heights. 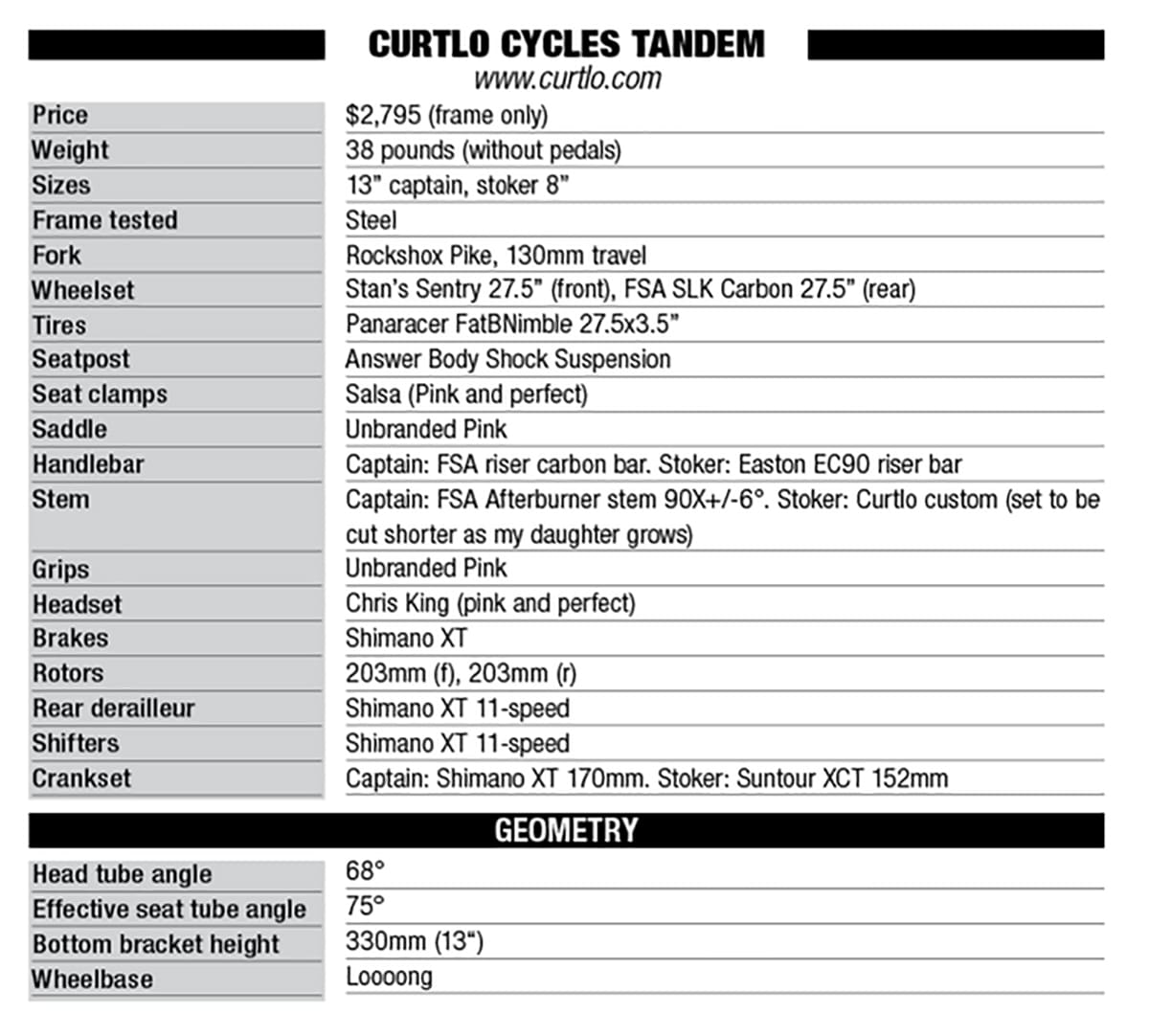