Skiing, mountain biking, and surfing in one day? Find out if Celeste manages to pull off this West Coast triple feat in Race Face's latest video. 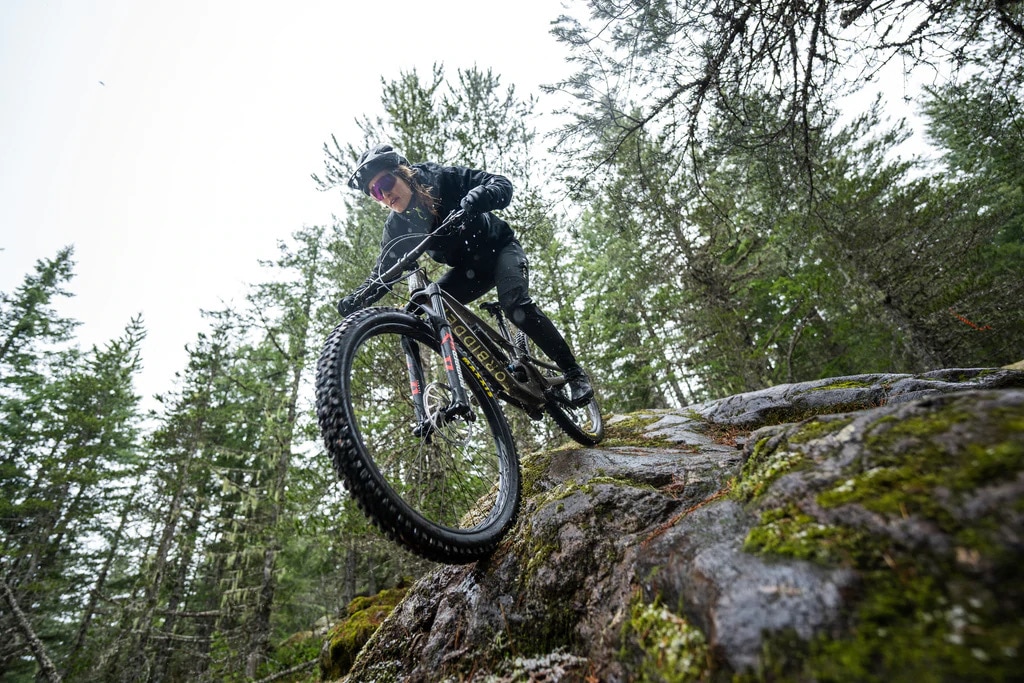 “As someone who’s overly excited about multisport days as well as making things a little bit harder on themselves than they need be, I thought this sounded super fun – but with a good twist.”

https://youtu.be/8lb94znZMkc
Vancouver Island has always been a bit of a mystery to me, having grown up on Vancouver’s North Shore. My family rarely frequented it and all my activities and sports kept me on the mainland. In my mind, Vancouver Island consisted only of Victoria, Tofino, and Nanaimo, nothing but surf destinations for Vancouverites. It wasn’t until last summer when I had the opportunity to visit the Comox Valley – Cumberland, Courtenay, and Comox – that I got proven very wrong. The Comox Valley is just an hour north of the Nanaimo ferry terminal and, not unlike the Sea to Sky, consists of endless trail networks and entire communities devoted to cycling and outdoor activities.

Cumberland especially holds true to this. The main trail network is about a 60-second pedal from everyone’s house and Forbidden Plateau, another amazing mountain bike area is only a 15-minute drive from town.

Recently, I had heard of people doing something called the Trifecta, where you ski, bike and surf on the same day on the island. This can be done in multiple ways. For example, you could ride bikes first thing in the morning, drive to a local ski resort, and then surf somewhere like Tofino in the evening. Alternatively, it turns out there’s surfing in Comox at an area called Little River on the opposite side of the Island from Tofino, but only if the winds are exactly right, which happens only a few times per year, usually in the winter or spring months. As someone who’s overly excited about multisport days as well as making things a little bit harder on themselves than they need be, I thought this sounded super fun – but with a good twist.

Outside of being able to surf in Comox, above the Forbidden Plateau bike trails, is an old decommissioned ski resort that was once on Mount Becher. Today, it’s a popular ski touring, snowshoeing, and bush party location with nice low angle, pre-cut ski runs and spectacular views of the ocean and surrounding mountains. Connecting skiing, biking, and surfing together without having to drive anywhere got me excited. Aside from the logistical nightmare of lining up a day that was nice enough to ski and bike but also windy enough to surf right at the end of the good surf season in Comox still resulted in an exceptionally good day.

The day started with a 4 am wake-up. The plan was to only utilize a vehicle in the morning to get to the top of Forbidden plateau before beginning the ski tour and otherwise connect all three sports with only my own leg power. Thinking back on the day, we probably experienced every single type of west coast weather possible. 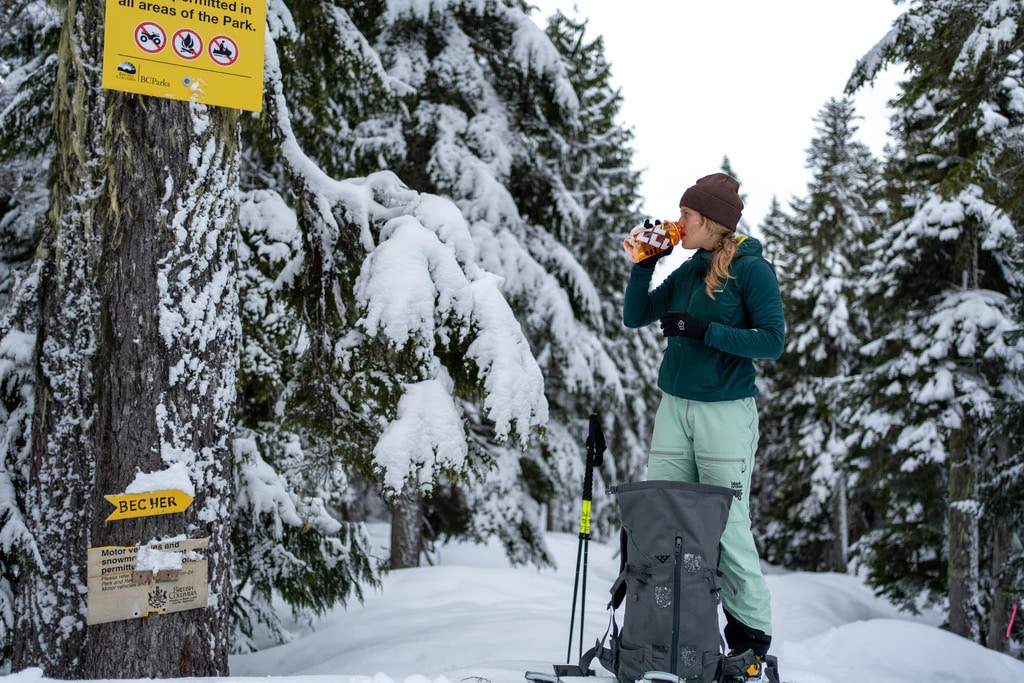 The tour up Mt. Becher started with a perfectly clear, unbelievable sunrise. The views of the ocean from the mountain were unreal! As we got halfway up the mountain, it changed, and quickly. A thick storm was rolling in slowly as we were nearing the alpine and all visibility quickly left the chat. Once we got close enough to the summit, to a spot where we could still see where we even came from, we transitioned. The ski down was interesting, the nature of the freeze-thaw cycles the coast had had over the previous couple weeks left an uncomfortable crust below a dust layer but once we got back into the trees, the crust layer faded out and there were some amazing turns to be had.

The mountain bike portion of the day was by far the best. Every time I’ve ridden Forbidden trails, it’s been a good time. This day was no exception. After a quick transition and post-ski food break, I rolled down to where the trails began. It was snowing, hailing, and raining the entire ride – which I quite enjoyed because the dirt on the plateau has a red tint to it, so the snow made for some cool visuals while riding. Forbidden trails are for the most part janky, raw, rocky, and fast, and every one of them unique from the next. With limited climbing, I was able to ride basically from the end of the ski tour all the way to the bottom of the mountain. Biking 20 kilometers from the bottom of Forbidden Plateau to Little River where I’d be transitioning to surf was hilarious. Soaked from being rained on the entire ride and having to pedal a mountain bike on a road for an hour just puts your mind in a weird meditative state. It was mostly uneventful save for the occasional dead roadkill, some very-much-alive deer and squirrels, and moments of wondering if I was going in the right direction.

One thing I did notice though: the sky cleared and the wind was conveniently blowing aggressively in a not-so-supportive direction the closer I got to the beach. 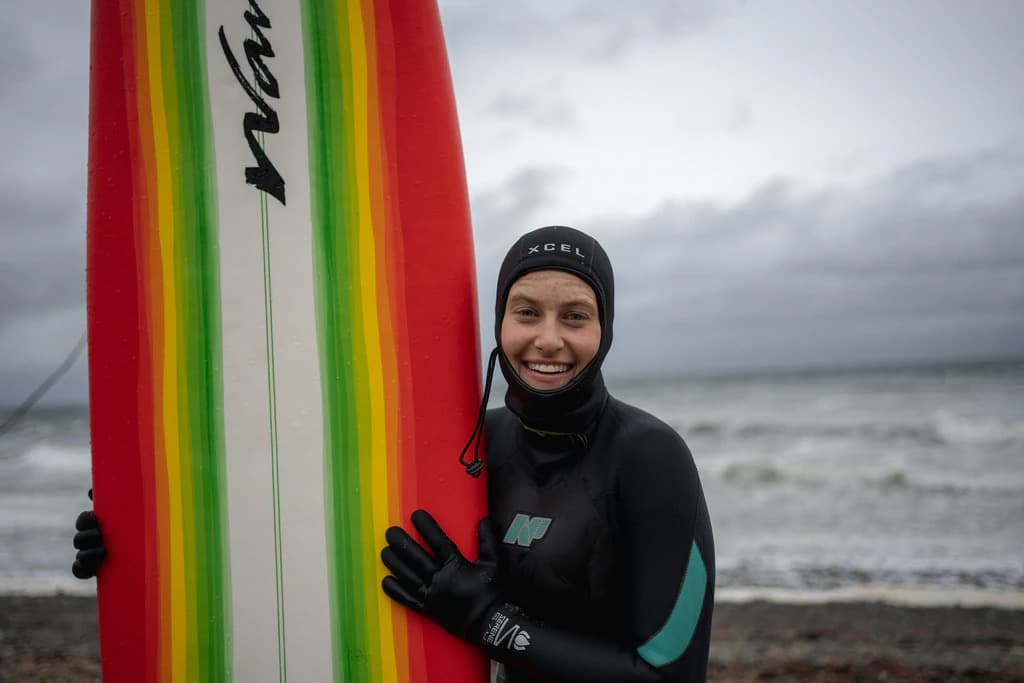 I am a terrible surfer. Surfing is the hardest sport in the world and don’t ever let anyone tell you otherwise. Going into this project, I made it painfully clear that if I got up on even one wave, it would be a miracle. I have never experienced wind so aggressive, and it really doesn’t help when you’re 1) a beginner, 2) holding an 8-foot-long surfboard acting as a wind sail, and 3) already climbed a mountain and traveled nearly 50km in all sorts of weather. After a couple hours of just absolutely washing machining myself and fighting against the wind, I finally got ONE wave and instantly forgot about any challenges.

At the end of the day, I was cooked but so stoked. Days like these are my favorite and I really felt the love and support from everyone involved. Thanks so much to Sebastien Berthiaume who went above and beyond to not only film but also photograph the entire day. To Stephane Pelletier, a long-time friend who handled all my logistical planning like a hero and supported me before, during, and after the day.

To Race Face, Marzocchi and Forbidden Bikes for being the best sponsors a girl could ask for and seeing the potential and fun in my weird ideas. Could not have done