Teammate Neko Mulally is reportedly testing one this month, too 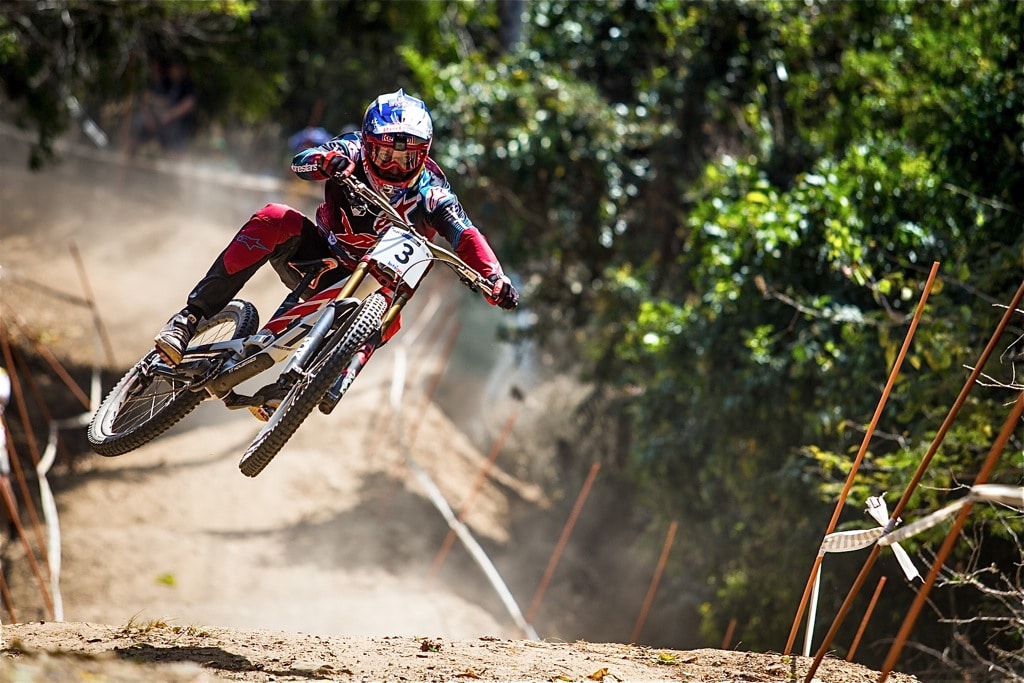 (Image: Aaron Gwin on his way to a bronze medal at the 2017 World Championships with 27.5-inch wheels. Photo by Isac Paddock)

We recently learned on good authority that Aaron Gwin has been testing a 29-inch YT downhill bike for the last few weeks and that Gwin’s teammate, Neko Mulally—America’s new downhill national champion—would be testing one this month as well. That is a very strong sign that the bike Gwin has been testing has proven to be a good one. Gwin recently shared a shadowy picture of one of his bikes on his Instagram page, a bike that some people say appears to be a yet-to-be-announced YT Tues 29 downhill bike.

Gwin missed both the recent USA Cycling National Championships and last weekend’s Mont-Sainte-Anne World Cup race so that his troublesome thumb injury could heal properly before racing again. Gwin injured the thumb earlier this year, then re-injured it a few weeks later at another World Cup race. Gwin has told MBA that he plans to race the final World Cup event of the year (La Bresse, France; August 25-26) and the World Championships (Lenzerheide, Switzerland; September 4-9). However, Gwin has not told us what bike he’ll be racing.

We know that Gwin won’t race a 29-inch downhill bike unless he’s convinced that it could help him go faster than he could on a bike with 27.5-inch wheels. We expect that is the main thing he’s been determining with his testing of the bike for the last few weeks.

In many of the World Cup races of the last two seasons, the majority of the top five finishers have been racing on 29-inch-wheeled downhill bikes. Gwin and reigning world champion Loic Bruni, who won the Mont-Sainte-Anne World Cup last weekend, have been two notable holdouts who have continued racing the top international events with 27.5-inch wheels.

Gwin won his record-setting fifth World Cup title last year on 27.5-inch wheels, and he won the opening World Cup round this year in Croatia on the same-size wheels. Still, it’s clear that 29-inch downhill bikes have helped make many of his competitors faster than they were before. If the bigger wheels could make Aaron Gwin faster, too, he could prove to be nearly invincible. Back in 2011, Gwin won five of the seven World Cup downhill races that year. That is the most World Cup downhill wins by an elite male racer in any year. If 29-inch wheels could make Gwin even faster than he was before, it’s possible that he might be able to equal or even surpass that record.

Although Gwin has already been testing a 29-inch downhill bike for the last few weeks, where things go next is still up in the air. If Gwin has found that the 29er is faster than his 27.5-inch bike, he would definitely want to race the 29er. We wouldn’t be surprised if Gwin shows up at the next World Cup race and the World Championships with both 27.5-inch and 29-inch downhill bikes, both bikes ready to go, much like the Santa Cruz team did when they first started racing 29-inch downhill bikes in 2017.

We saw a message from Gwin to one of his fans on the internet last year where Aaron admitted to making a million dollars a year. We’re sure he wouldn’t want to jeopardize that income by starting to lose races on a regular basis.

If a 29-inch-wheeled downhill bike can help Gwin win the World Championship, the one race Gwin has never won, we’re sure that his sponsors would want him racing with 29-inch wheels. It’s much easier to sell a product when your rider is recognized as the fastest guy in the world.

We texted Gwin this week to see if he’d tell us whether he’d be bringing a 29-inch downhill bike to the rest of the races this year. “Can’t say right now,” Gwin replied. Read into that what you want. We think he’ll bringing a 29er.