Aaron Gwin first tried mountain biking in the summer of 2007 with BMX biking buddy Cody Warren, who had been America’s 2005 Downhill National Champion. After seeing Aaron ride, Cody talked Gwin into racing downhill at Fontana and signing up for the pro class for his debut race. Gwin finished third in the Pro Men’s Downhill event (Cody won; Gwin was just over two seconds back, about a tenth of a second out of taking second place). After competing in a few more races in early 2008, Gwin was attracting so much attention that Yeti sponsored him. That year, less than a year after his first downhill race, Aaron scored two top-10 finishes in the 2008 World Cup series. 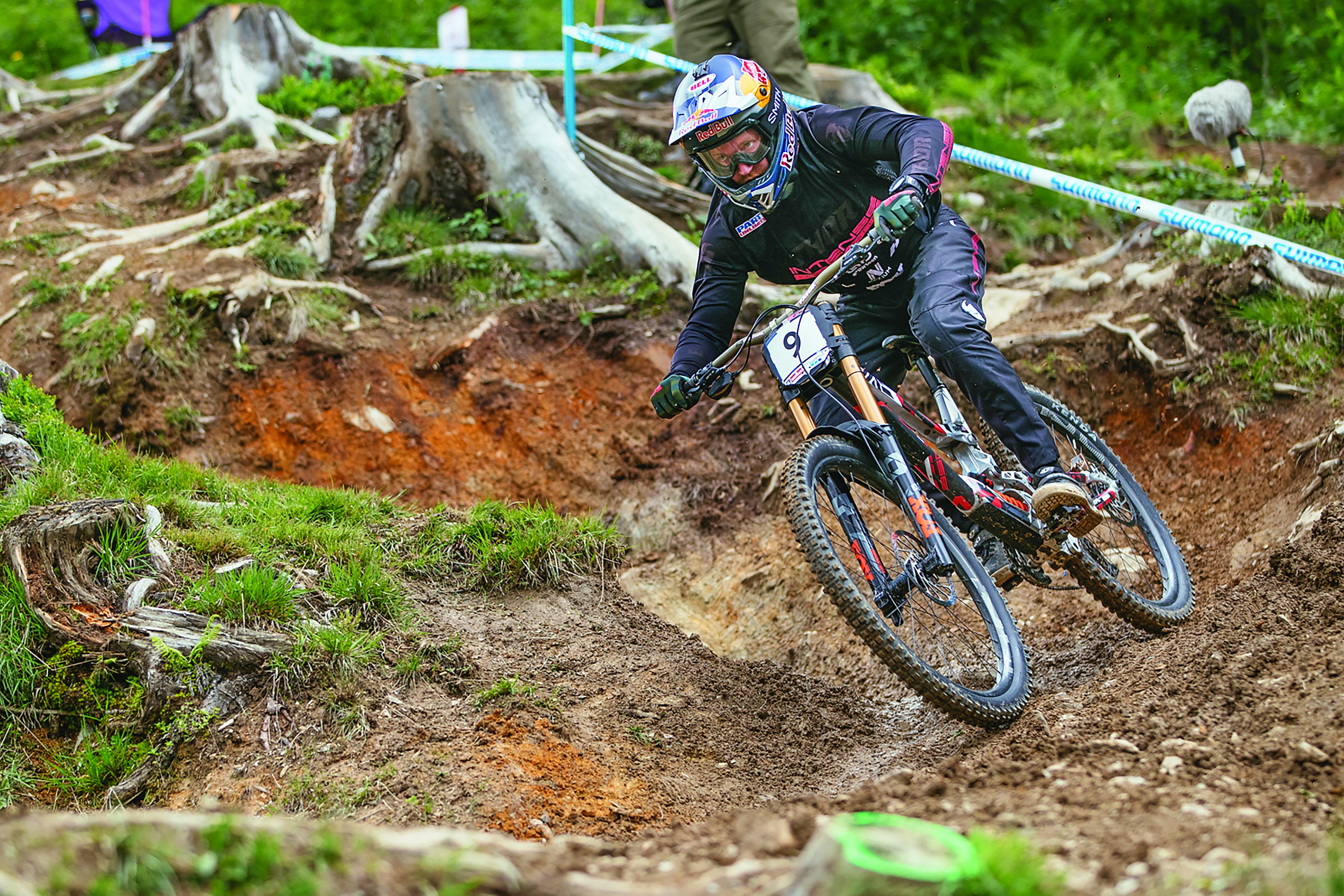 Gwin got even faster over the next two years. Then, in the spring of 2011, Gwin won his first World Cup race and kept on winning. He won five World Cup downhill races that year—a record that still stands today—plus the overall title. The next year, Gwin won four more World Cup races and picked up his second series title.

After that, Gwin had a couple of less-than-stellar years. He then signed with YT and won the World Cup title for three more years—2015, 2016 and 2017—setting the record for the most Elite Men’s Downhill World Cup titles.

Besides the number of victories, there were other things that made Gwin’s racing memorable. His race run at the 2015 World Cup in Leogang, Austria, could be the most memorable downhill performance in history. After breaking his chain at the start of his final run, Gwin rode the rest of the course with no chain and still won the race.

The last few years have been tougher for Gwin. His most recent World Cup win was in April 2018.

In 2019, Gwin’s first year on the Intense team, he placed fifth at the World Cup event in Leogang. Setbacks plagued him the rest of that year, preventing a shot at the title.

In the shortened international race season of 2020, Gwin didn’t win any World Cup events, but he did win two downhill races at Fontana as well as a So Cal Enduro competition at Vail Lake, California.

In 2021, Aaron placed second at the DVO downhill race at Bootleg Canyon and won two more SoCal enduro races at Vail Lake. This past summer, Gwin took fourth in the U.S. National Championships, where rising star Dakotah Norton took home the title, with Luca Shaw second and Austin Dooley third. The competition in the U.S. is tough now.

A bad crash in a practice session in the Eastern U.S. this past summer resulted in a badly tweaked back that left Gwin unable to race the year’s final World Cups, as well as the UCI World Championships.

When Aaron returns to racing in 2022, we hope to see him at the top of his game again. It will be interesting to see how he fares against the top international stars of the last few years. Aaron, who will be 34 when the 2022 World Cup race year starts, has told us he wants to raise his World Cup win tally a few more places. Gwin has 20 such wins to date, placing him second on the men’s World Cup downhill winners’ list. Greg Minnaar is the only rider ahead of him, with 23 World Cup wins, and he just turned 40.

By that standard, Aaron could have six more years to try to catch or overtake Greg in the World Cup win tally. Can Gwin still dominate the World Cup series the way he did five times in the past 11 seasons? We’ll have to wait and see, but we wouldn’t write him off.

Racing/riding specialty: Anything that goes downhill.

Favorite movie: Into the Wild, Ford vs. Ferrari

Jobs held (other than racer): Worked at a restaurant for a brief time and was on a dig crew for a septic company as a teenager

Most embarrassing moment: I crashed pretty hard in practice while goon riding at Sea Otter in 2013-ish. There were a bunch of people standing around watching; it was kinda more funny than embarrassing looking back now

Always takes on a trip: Laptop

What you would be if you were not a racer: Bike tester/developer

“We’ve been developing this bike for a little while now and have learned a ton. We’re going to keep the testing process going, and I’m really excited to see where we end up when finished.”

“Settings vary from track to track, and it’s been valved to suit my needs.”

“Settings don’t change too much, and if they do, it’s usually only a click or two. The damper has also been valved to suit my needs.”

Tires: “We run Kenda tires. We use three main models: The Pinner, a new prototype intermediate tire, and a mud tire called the Gran Mudda. We use both 29-inch and 27.5-inch tires, and widths vary between 2.4 and 2.45 inches, depending on which tire is chosen. Front pressures usually start off at 27psi and the rear at 31psi, but we’ll adjust that according to the track, speed, conditions, etc.”

Inner tubes or sealant: “Always tubeless, and we use Joe’s Sealant. Specifically, the Podium sealant at the races and the Eco sealant in the training bikes.”

Tire liners: “No ‘liners’ so to speak, but we do run FTD tire inserts. Mostly just in the rear, but sometimes we’ll run one in the front as well if conditions require it.”

“Very strong and reliable for a carbon rim. We’ve had great luck with these.”

Carbon or titanium bolts: “Titanium bolts everywhere we can, meaning some areas we’ll use standard bolts for safety or strength. We use titanium bolts strictly from Better Bolts. Those guys know their titanium.”

Extras: “Chainguide is an E13, and we’ve also been toying around with an O-chain device.”

Weight of complete bike: “Currently as raced, it’s right around the 37- to 38-pound range. Depends on tire and insert choice.”

Estimated price or value of bike: “Well, it’s still a prototype, and it’s hard to estimate the cost of some of the machined parts we have on there. Let’s just say ‘very expensive’ as it currently sits [laughs]. But, when the bike comes to production, it will be very reasonably priced for the consumers.” 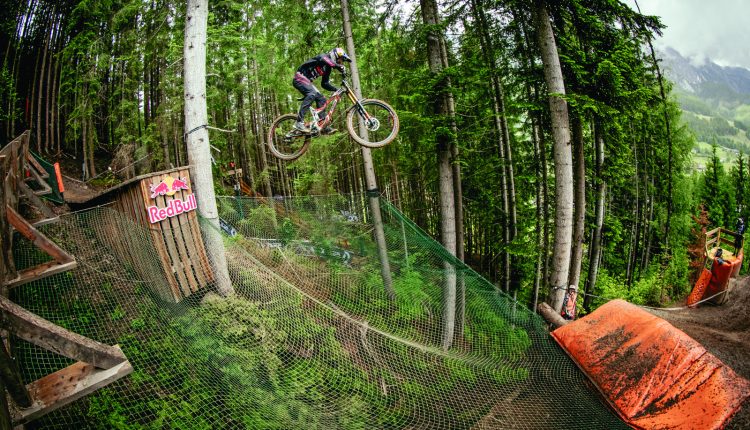 AG: My dad is a retired physical therapist. My mom is a nurse and now teaches nursing at a college.

AG: I raced BMX from ages 4–8 and motocross from ages 12–17. I was introduced to mountain bikes at age 19 by a friend and picked it up because it was fun!

MBA: What were your best competition results on non-mountain bikes?

AG: I finished third place in the Pro class at a local race in Fontana, California.

MBA: What have been your best national and international results on mountain bikes?

AG: Yucca Valley, California. I was scheduled to start college just after the time that I was given my first offer to race mountain bikes. I chose mountain bikes at that time and have been racing professionally ever since. 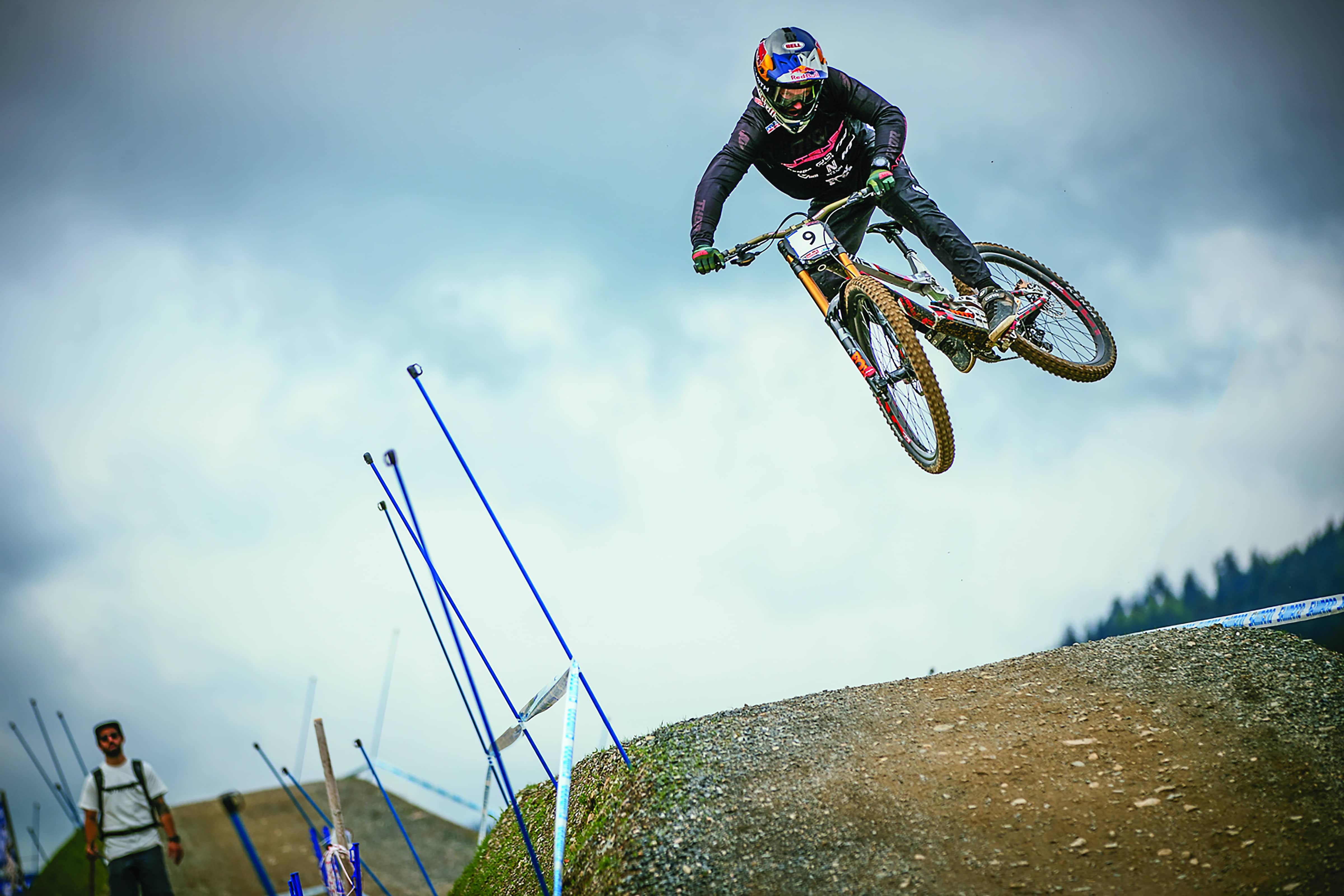 AG: I can’t remember anything specific academically, but I did maintain a straight-A GPA through high school while racing motocross.

MBA: Have you competed in any of them?

MBA: How well did you do?

AG: I won a local-level tennis tournament in Palm Springs.

MBA: Can you tell us something interesting or unusual about yourself or your family that is not widely known?

AG: My family is pretty musical. My dad played the trumpet in multiple traveling bands when he was young and went to college on a music scholarship. He recently started playing in a new group again a few months ago. My mom plays piano and sings. She wrote and recorded some of her own music when I was younger. My dad is from Alabama, and when I was a kid, he used to wake me up blasting Lynyrd Skynyrd’s “Sweet Home Alabama” every day before school. I’d love to improve my guitar playing as I get older and learn to sing.”

VIDEO: HOW TO RIDE DROPS WITH WADE SIMMONS