Designed and developed out of Dayton, Ohio, Airborne’s mountain bikes have come a long way from their cross-country roots. With the Taka being the best-priced downhill bike we’ve ever seen, you can imagine how much we looked forward to getting our hands on the new Airborne Toxin park bike. With their “Wingmen” testers being daily riders (passionate about bicycles, but not necessarily pros) you can be certain their bikes are developed and tested with their customers in mind. 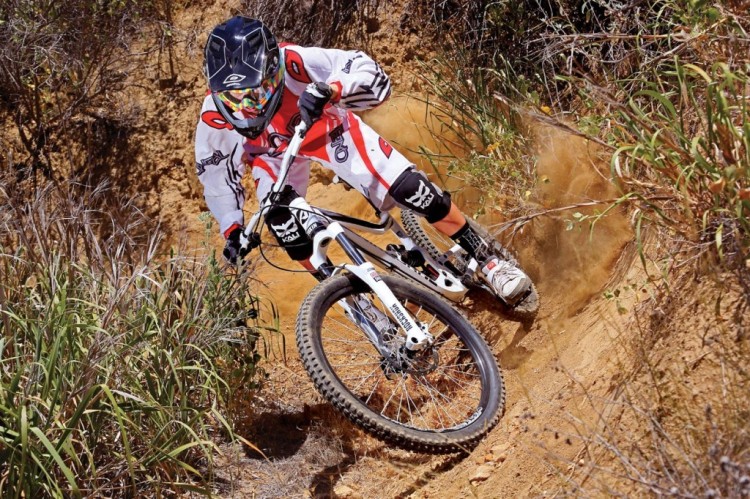 With more and more mountain resorts opening bike parks to keep their lifts running during the summer months, the opportunity to test our skills with the benefit of a chairlift is increasing, coast-to-coast. Those looking to partake in resort riding are often stunned by the hefty price tags that accompany high-end park bikes that have very limited real-world riding uses. Enter the Airborne Toxin. It’s a fully capable park bike that doesn’t cost an entire year’s worth of rent. Additionally, owning a Toxin eliminates the expense of renting a bike at the resort and allows riders to feel familiar and confident on their own bike every time they hit the park.

The Toxin’s 6061-T6 aluminum frame is about as stout as they come. Josh Bender would have difficulty finding a way to put a dent in this frame. With the complete package weighing 39.5 pounds, it surely won’t be the lightest bike on the mountain, but it adds a bit of frame insurance while trying to time the park’s biggest jump line. Built atop 26-inch wheels and a single-pivot rear suspension, it is a meat-and-potatoes kind of bike. 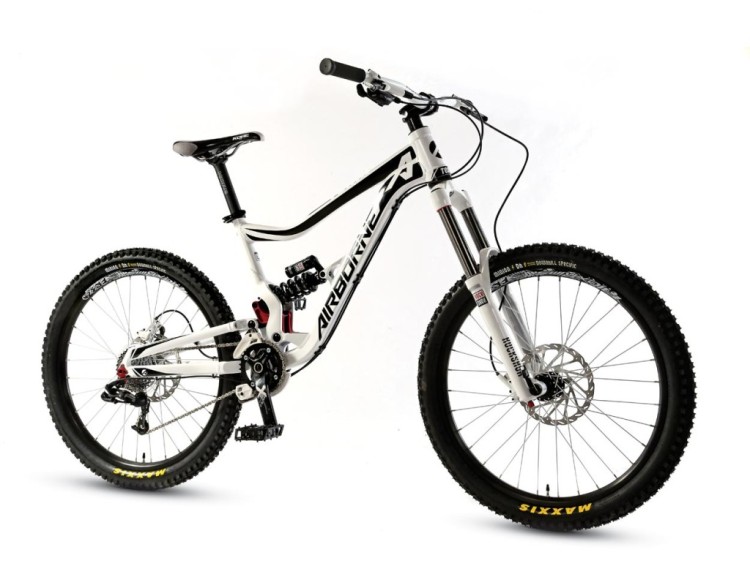 The RockShox Domain is a welcome sight on any park bike, ensuring a tried-and-true feel that’s unmatched by anything in its price range. We started with the rebound right in the middle and never touched it again. It made butter of babyheads and allowed us to hold a straight line, regardless of the terrain. The Maxxis Minion DHF tires have been a go-to for resort riders over the last few years. Unfortunately, the high-gloss white of the spokes, Kore handlebars and Avid Elixir 3 brakes make the Toxin look low budget. They certainly stand out, but not in a good way. 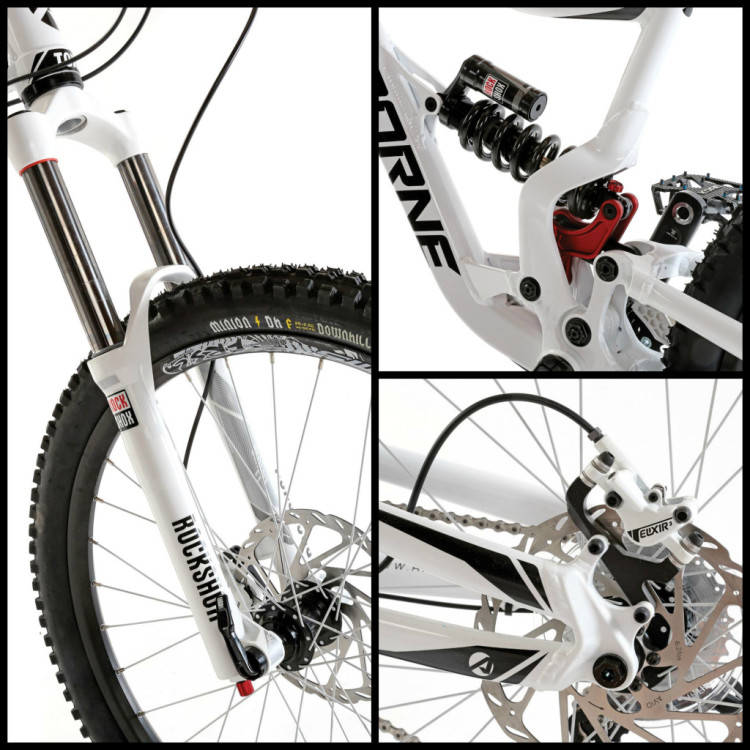 Moving Out: Right out of the box, the Toxin’s rear linkage had play when picked up by the saddle, which was somewhat remedied by tightening down the intermediate pivot link, but nothing removed all the play. With little opportunity or need to fine-tune anything else on the bike, we centered the fork’s rebound, threw on a helmet and hit the trail.

Descending: The guy behind you will have a have a hard time keeping up, even with his expensive sled and empty wallet. With 7-inches of travel and a RockShox Kage R coil shock to soak up everything that came our way, we felt comfortable pointing this machine downhill. Brakes open, its 65-degree head tube angle holds a line relentlessly.

Cornering: The Toxin’s single-pivot linkage keeps you low in the corners without bogging down your exit speed. Paired with a 10×135-millimeter thru-axle, the rear triangle is stiff and tracks perfectly, even while railing the deepest of corners. Its weight and 47.4-inch wheelbase try to push it through tight switchbacks, but taking corners a little wider than usual allowed us to maintain a reasonable exit speed.

Pedaling: It’s a park bike and therefore doesn’t see much pedaling in the saddle, but that’s still when we had the most trouble. With every pedal stroke (and “every” is not an exaggeration), the Kore saddle squeaked something fierce. Pedaling any distance in the saddle mimicked the most chew-crazed golden retriever with a fresh rubber ducky. Not helping the pedaling experience, at over 1 1/4-inches thick, Kore has produced the Belgian waffle of pedals.

Suspension feel: The Toxin sports a simple, modified single-pivot design that cuts down on brake squat. For a budget shock, the RockShox Kage R delivers predictable compression that rides plush throughout its entire range. Paired with the modified linkage, it bobs less than other single-pivot designs while pedaling and eats up chunder just as well as it does the trailside drop. As with any park bike, you want the suspension to do the work for you, which the Domain and Kage R do in unison with very little trail tuning.

Boosting it: At just under 40 pounds, it doesn’t have the most nimble feel, but it doubles as a tracking missile when you get it in the air. Simply point it exactly where you want it to land and it’ll hit its target dead-on without hesitation. 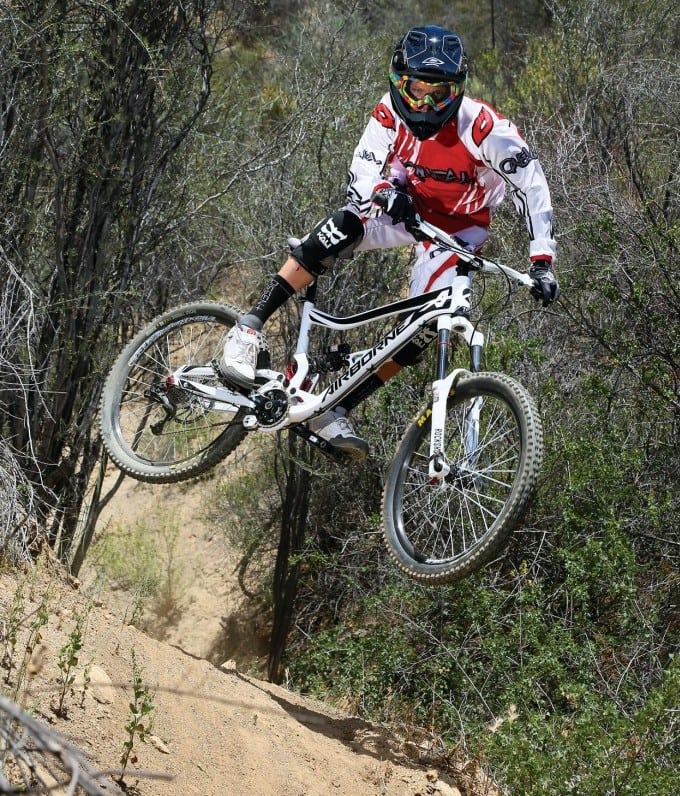 Immediately swap the saddle out for something simple and light. You won’t be in the saddle often, but you don’t want to be scaring away the wildlife while you are. While the Kore pedals hold a shoe really well, they’re simply too massive and heavy. We’d suggest a slimmer pedal that’s able to provide the large platform without the phonebook thickness and weight.

These bikes are only sold directly to riders, so be sure to check out the website’s sizing. Or, even better, call Airborne directly to discuss bike fit.

Airborne bikes are sold factory-direct, so while the Toxin sells at a beginner’s price point, you have to have a decent level of mechanical skill and know-how to set it up and maintain it properly. A bike shop will help you, but don’t expect any discounts on service or freebie advice on a bike you didn’t purchase from them.

The unspoken fact about bike parks is that their riding seasons are short. To shell out mega bucks on a bike for a four-month window of riding opportunity only makes sense to a limited number of riders. The Toxin really makes sense for the rider who will only visit a park four to five times a year but doesn’t want to trust rented equipment or push a conventional trail bike past its limits.

Looking for a park bike you won’t need touchup paint for? This is it. Spend a lot less on a bike and feel better about taking the day off work to ride the resort. 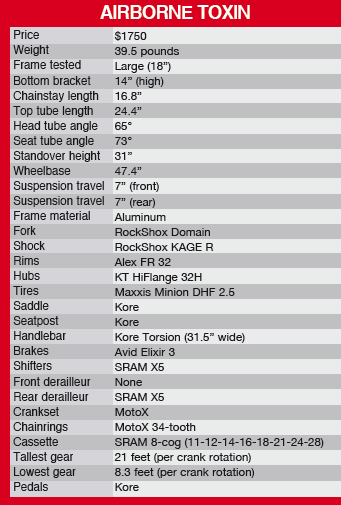 Time to Whip Off the Dust at Red Bull Rampage