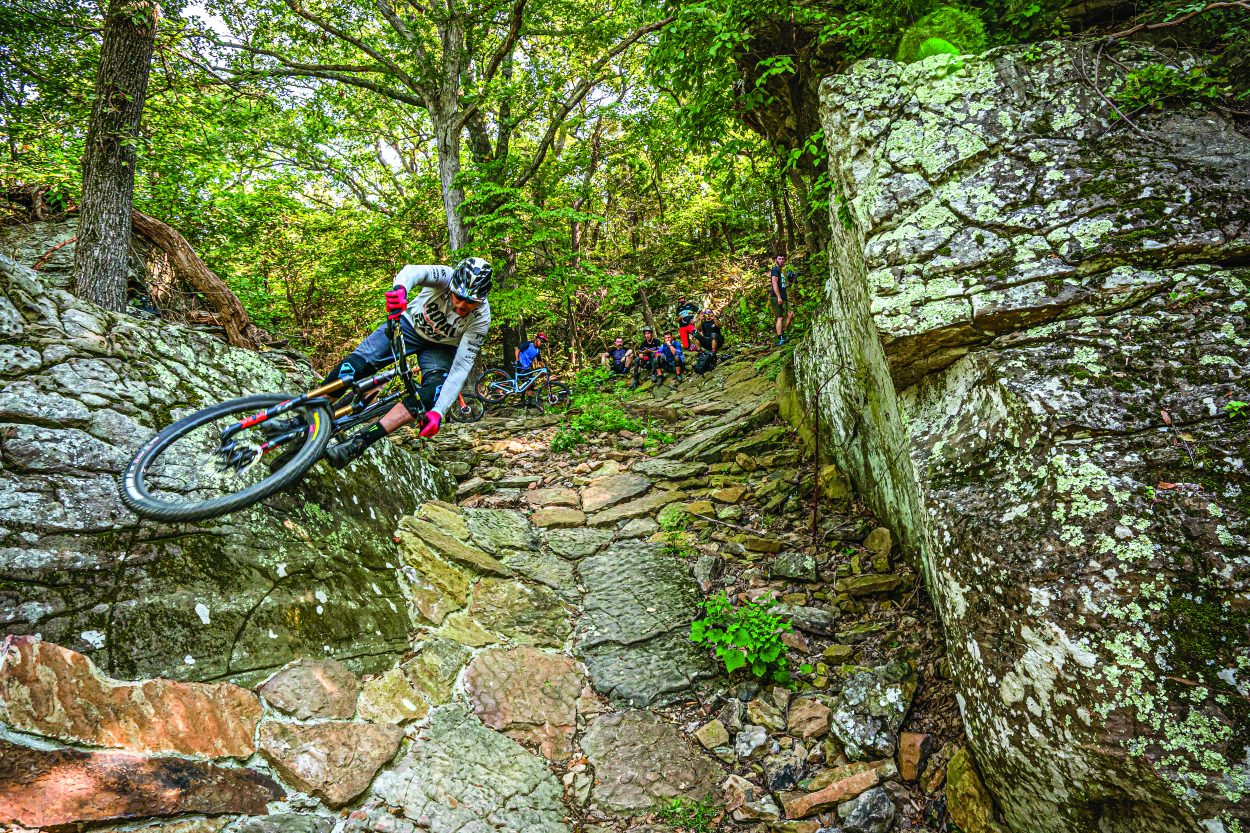 Steve Peat shows his skills on a wall ride while the crew watches.

There’s nothing better than riding with good friends and showing them new trails you’ve fallen in love with. I’ve been lucky enough to meet a lot of great athletes from a number of different sports, and it’s awesome to find out that many of them love riding mountain bikes, thus the All-Star event was created. Get a bunch of high-profile friends together, take them to an area they’ve probably never ridden and show them a great time. Sounds like an easy concept, right? It should be, but then you ask them to meet you in Arkansas and hesitation sets in. 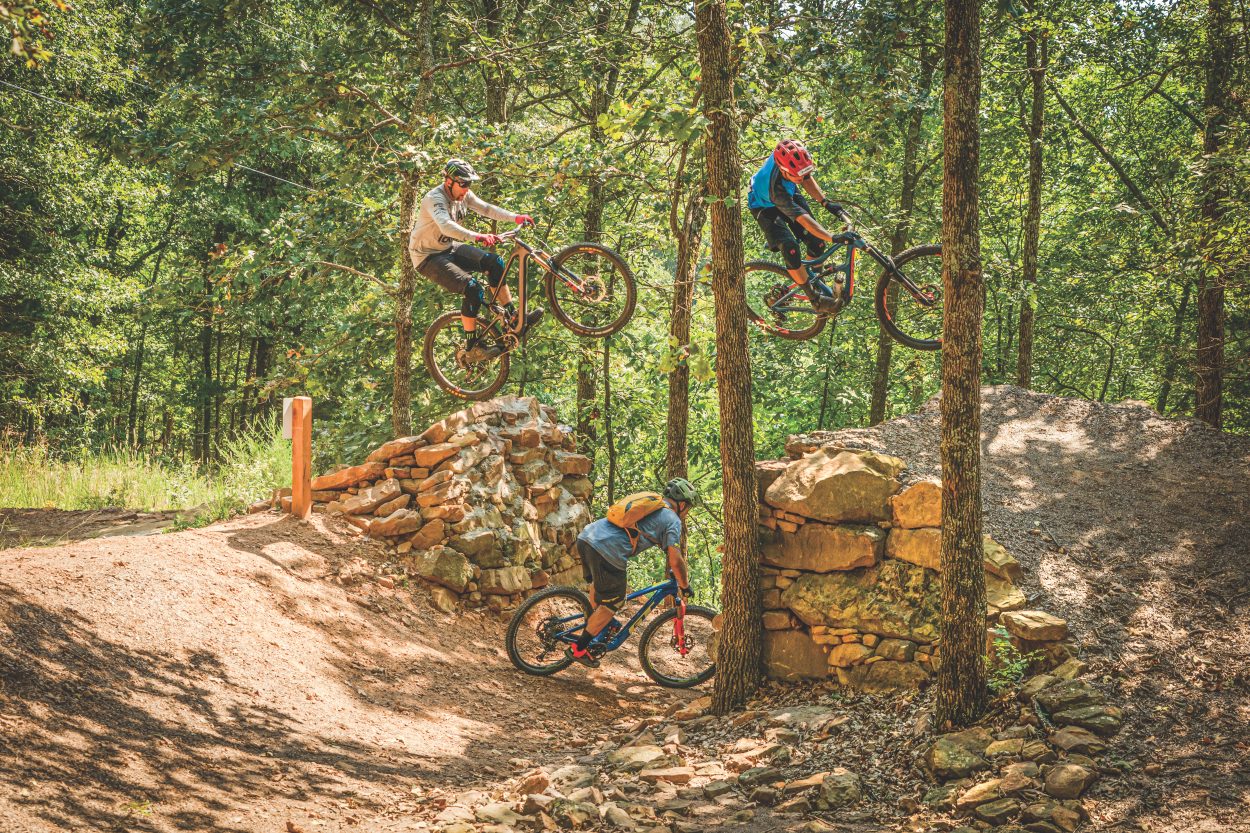 Lopes and Peaty chasing down Hans on one of the many unique features in Fitzgerald.

I was first told about the trails being built in northwest Arkansas by [Walmart heir] Tom Walton himself when we rode together in Laguna Beach about seven or eight years ago. Like most, I questioned the location and honestly didn’t give Tom or Arkansas much credit. Let’s be honest; Arkansas isn’t really known for its mountains. Fast-forward to 2016 when I was invited to Bentonville by Ryan Hale of LaneShift to do a shoot. I didn’t have any real expectations of great trails or a town that would inspire me to return, but I was blown away by the quality features, masonry construction and pure volume of developed trails within riding distance of downtown. Another thing that was impressive to me was the quality of restaurants, coffee shops, breweries and museums. Everything far exceeded any notions of what I’d imagined Arkansas would be like. I had this same exact feeling the first time I went to Whistler in the early 2000s. I didn’t want to leave and was already planning my next trip back, which is exactly how I felt after my very first trip to Bentonville. 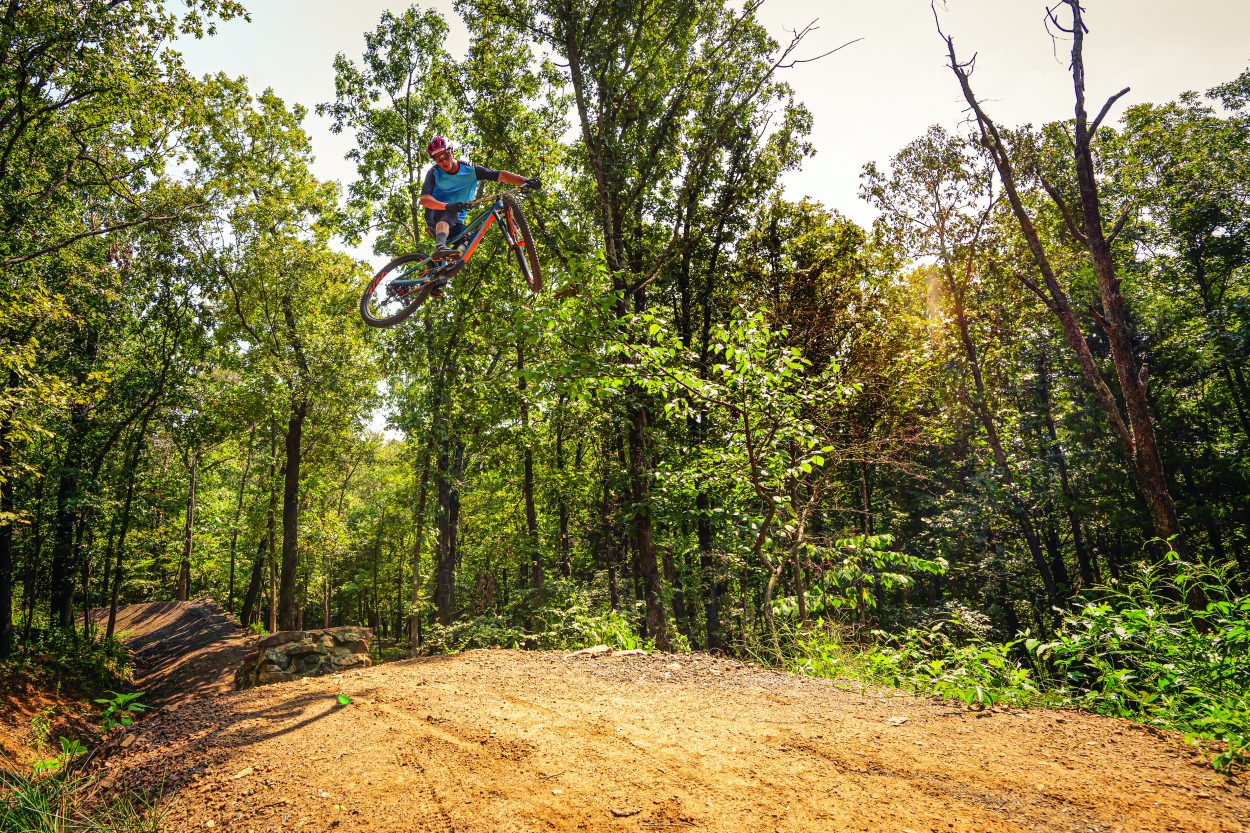 Bentonville and all of Northwest Arkansas has become a regular spot that I visit multiple times a year. I knew it would blow some minds and give these guys an experience that would leave an impression on them. Nine trustworthy friends made the commitment, and with some help from Bike Bentonville, OZTrailsNWA, Gary Vernon, Aimee Ross, Christian Falcon, Colin Sigars and Tom Walton, I put together an all-star list. 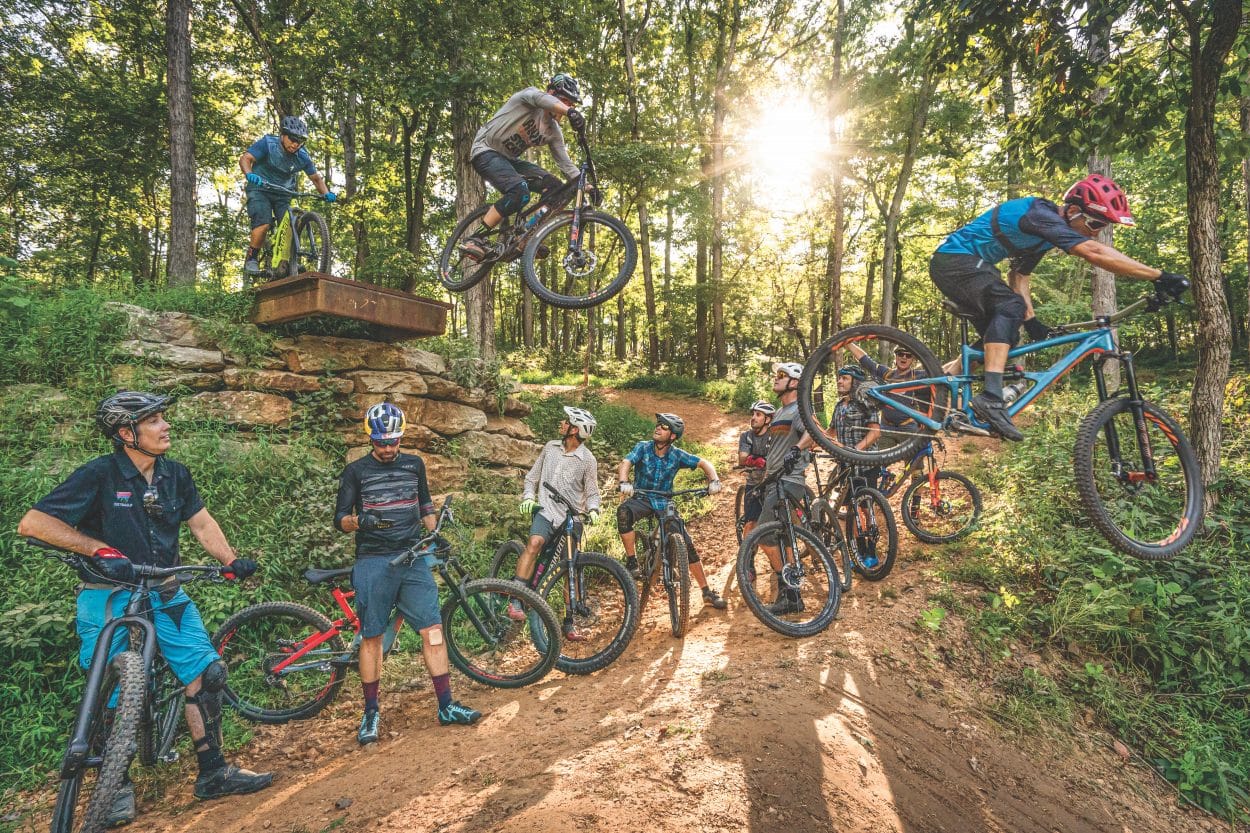 Way too many races, championships and titles won between this crew to count. Brian, Steve and Jeremy give the boys a little show. 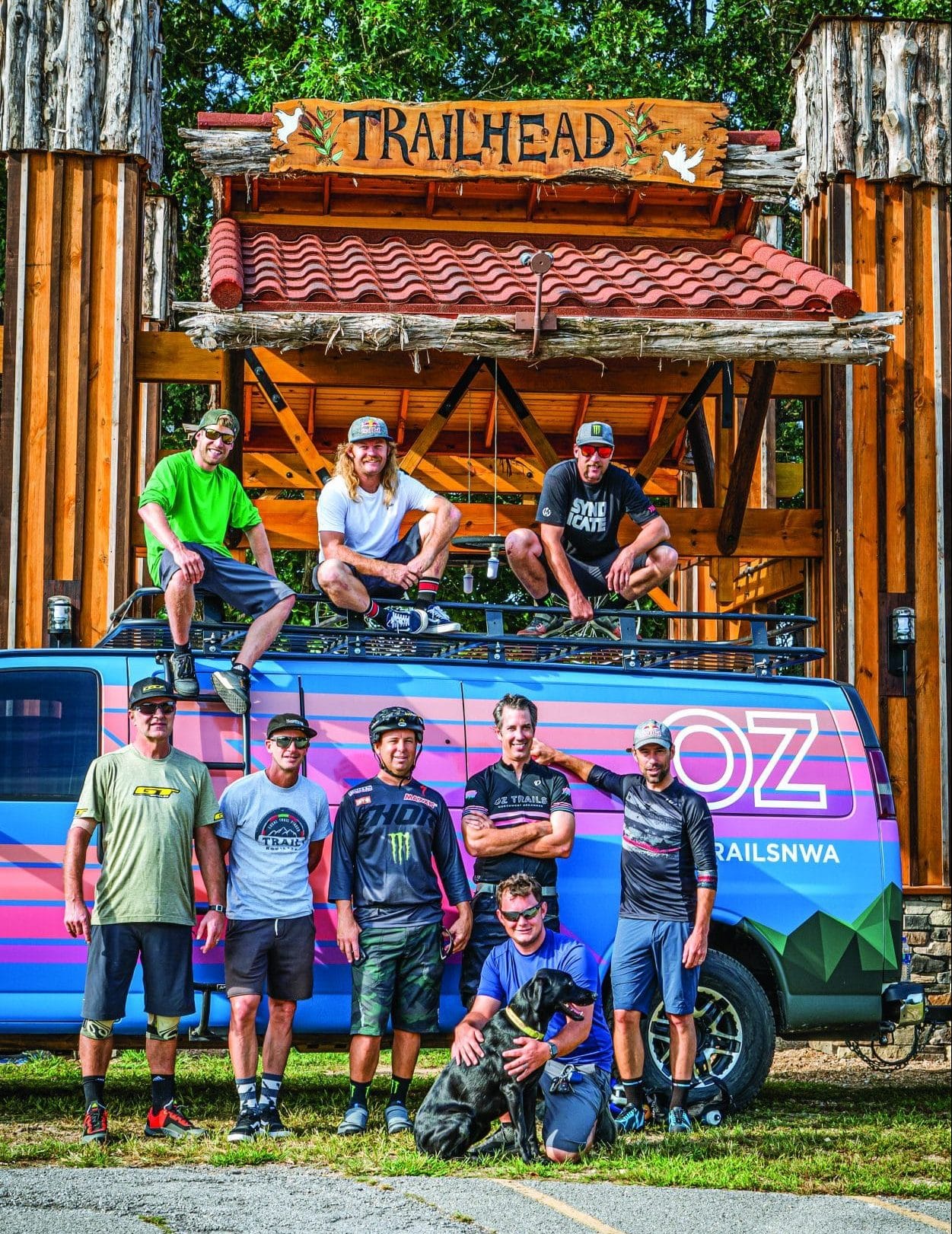 Steve Peat and Hans Rey arrived a day before the planned arrival date. And since I had Brian Plunkett, aka “Shreddyshots,” already in town, we decided to take advantage of his camera skills by focusing on getting some rad shots. The Fitzgerald Trails in Springdale are about a 20-minute drive from downtown Bentonville and well worth the drive. This zone has some of the bigger and cooler features of anywhere around, and I figured these two could handle the aggressive terrain. The stonework in this area is amazing. And with one of the trails named “Best Trail Ever,” you wouldn’t expect anything less.

After a half day of shooting some huge jumps, berms and drops, all capped in stone, we made our way back to Bentonville to meet most of the crew who were arriving. We took a quick hour spin around town to tease the newcomers, then it was off to The Hive for dinner. 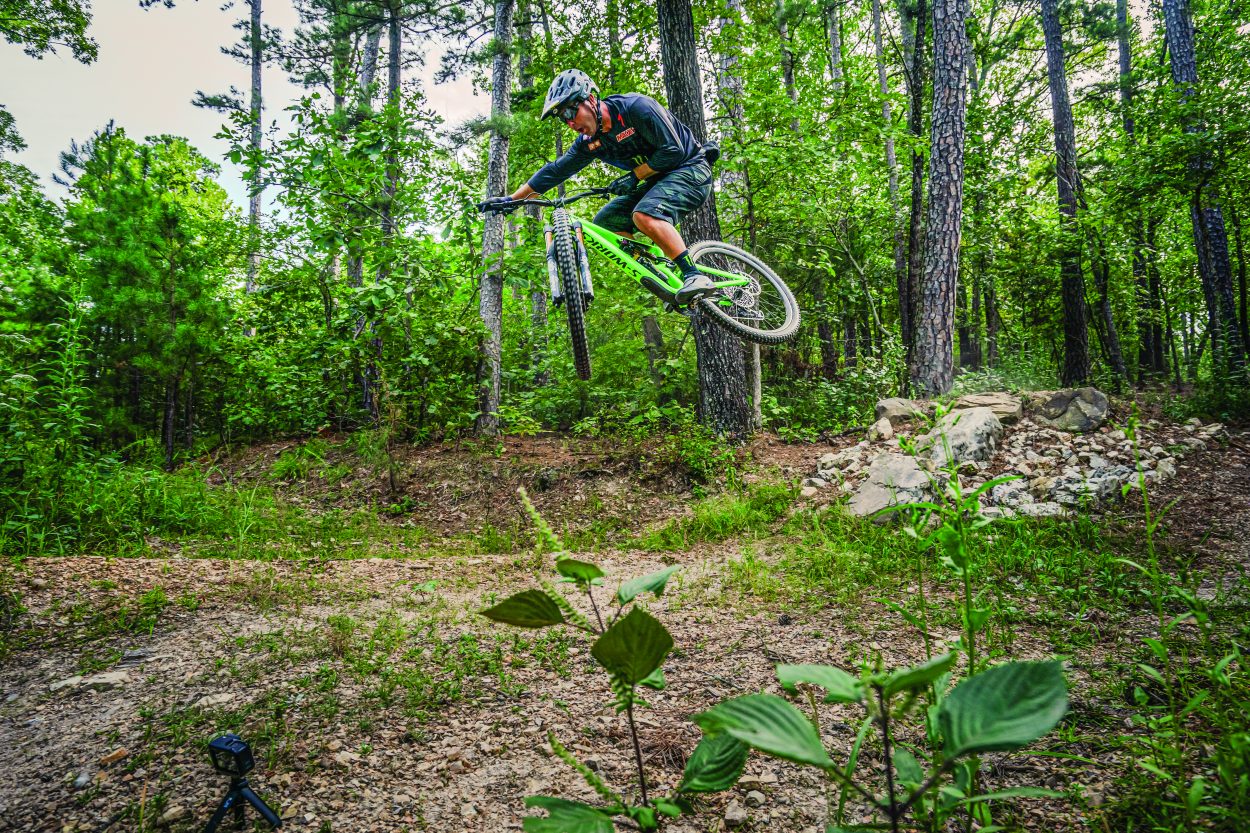 “The King of Supercross,” Jeremy McGrath, used to race BMX before making the shift to become the greatest SX racer ever with 72 wins and seven championship titles.

Eureka Springs was the location for our first official ride. About an hour’s drive from Bentonville, you’ll arrive at the Great Passion Play. Lucky for us, we got the VIP treatment. It only took about 15 minutes via helicopter. The trails in this zone are a bit more natural and definitely have a different flow than Fitzgerald. There is less rock and a little more of an old-school singletrack feel, but with some new-school thrown in. Jagged Axe is the build company responsible for these trails, and before we made our way to the Crescent Hotel for lunch, they wanted to show us a new feature being built called Gravity Cavity. Unfortunately, while filming a train of us all hitting this section, Tim Johnson jumped straight when he was supposed to jump left, resulting in him crashing and Hucker landing on him. Not what you want happening on the first day of a three-day riding trip. Six stitches later, Tim was joining us for lunch like the trooper he is.

The second half of the day was spent at Lake Leatherwood, which is known for multiple DH runs that are easily shuttled. With plenty of jumps, berms and drops, the trail allowed everyone to become comfortable with all the features on each trail in a few short runs. After five to six runs, the energy levels were running low and it was time to head back to Bentonville and get cleaned up for dinner at my favorite restaurant, Preacher’s Son. 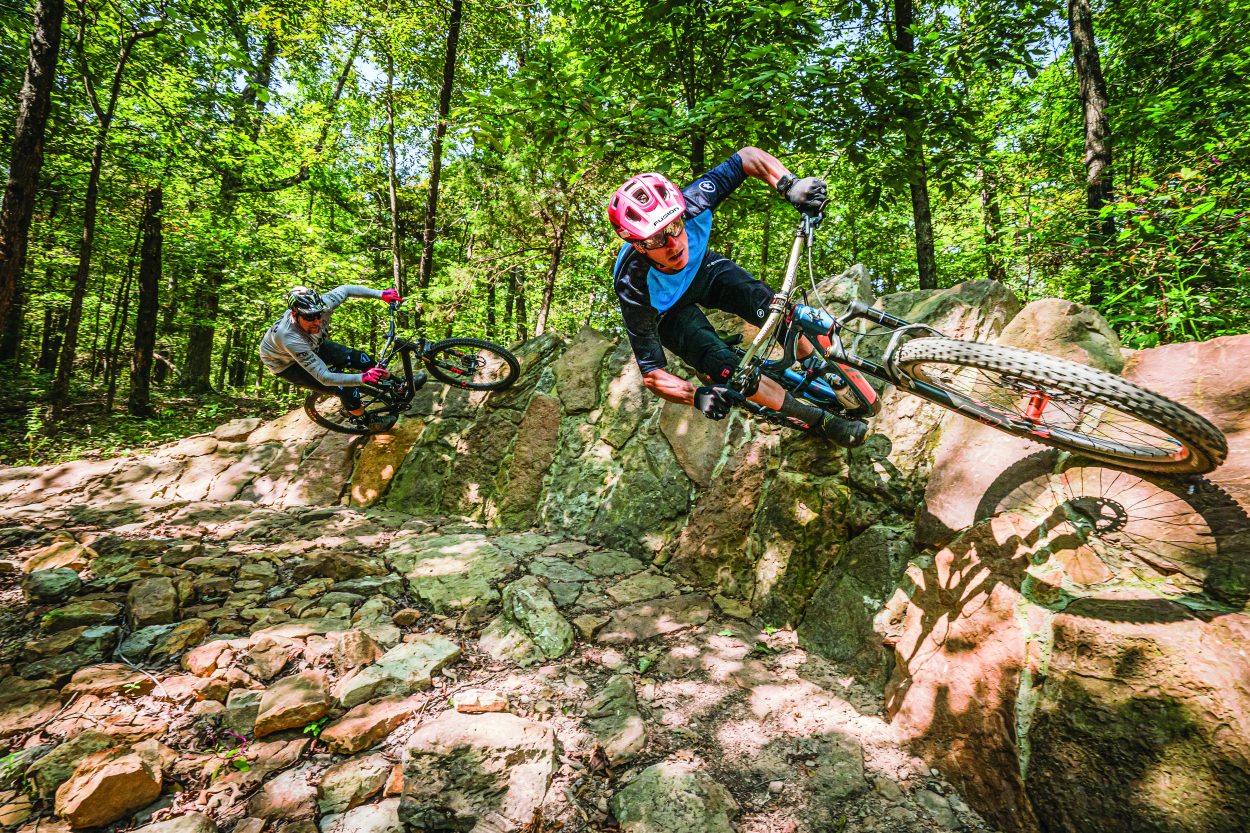 Peaty and Lopes rail some of the coolest berms we’ve ever seen.

This was the Holy Grail day of riding for a few reasons. First, it was the only day we had every one of the all-stars together, with the arrival of Jimmie Johnson and Ben Bostrom. Second, we were riding two iconic areas of Bentonville, Coler and Slaughter Pen, both amazing and a short pedal ride from town.

The hub at Coler is a masterpiece in itself. It is a massive two-story steel structure that you pedal to the top of before choosing one of two trails to drop into. We chose Hammer, which consists of numerous jumps before coming to the iconic bigger drops. The session began with most of us lapping this fun trail. It flows well, and the pedal backup is an easy one. The large drops at the end are intimidating but actually much easier than most think. Peaty, McGrath and I sessioned this while jumping over the others. We almost had Jimmie going for it, but with a NASCAR race in Vegas just a few days out, he decided to save it for his next visit. 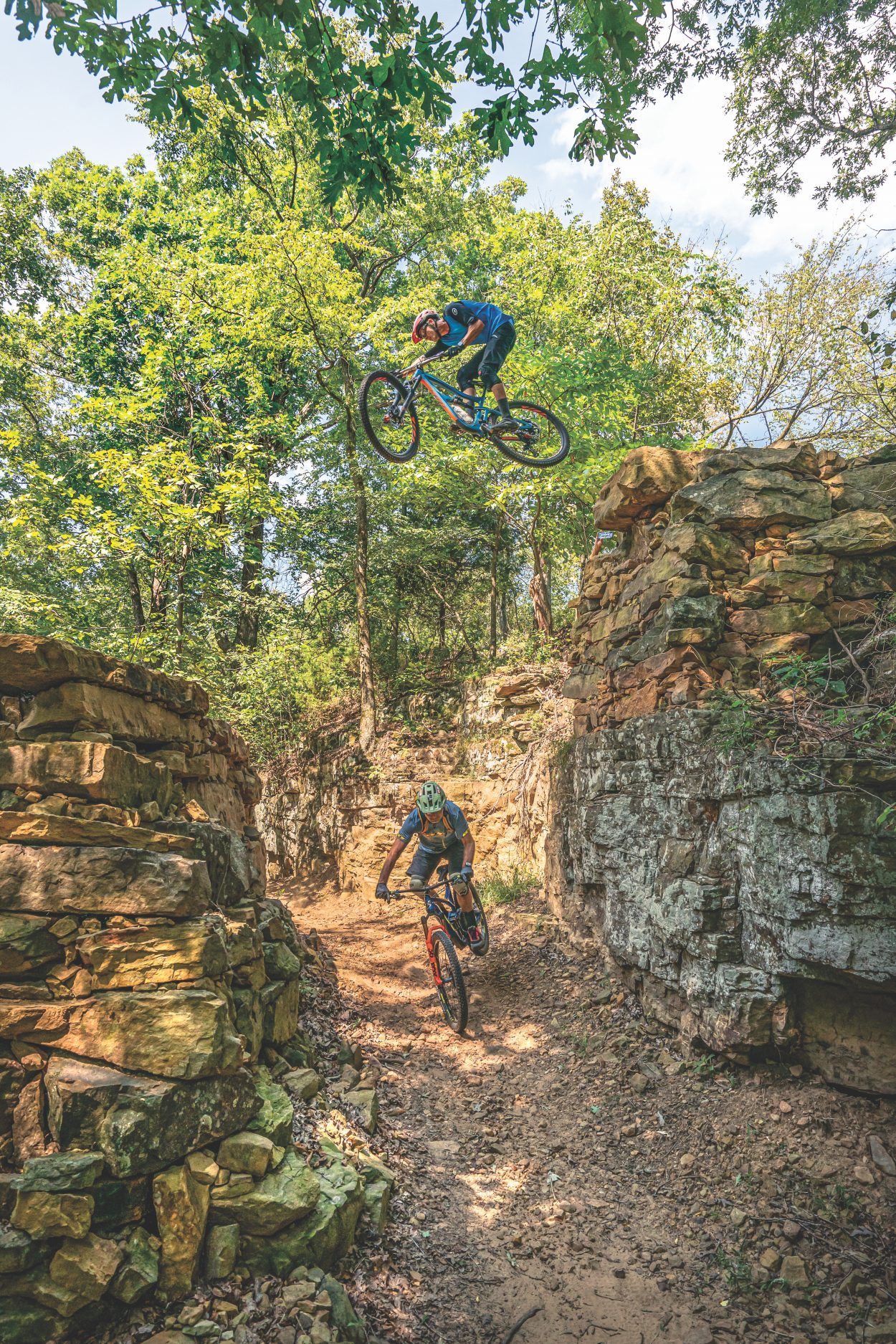 Safe to say trail builders in Arkansas know how to stack rocks, and Lopes isn’t scared of heights.

Lunch went down at Peddlers Pub, a fitting spot for a bike crowd. We had some good food, took a little group photo shoot in front of the mural on the side of the building, watched some “Outside TV” interviews, and had an hour of chill time to let the food digest before the next ride.

We gathered at Onyx Coffee in town for the start of our next ride through Slaughter Pen. We rode some of the more technical, narrow, rocky singletrack, as well as the newly revamped Downhill Track. This brought me back to my 4-Cross days, with the massive berms, jumps and wall rides. Everything on this track is built pretty safe. While not everyone will be able to clear every jump on this course, no matter your skill level, it’s most likely you will be able to make it down. Everything is rollable, and the massive wall ride has a passable alternative route.

There was no shortage of fun being had, but daylight was running low and the humidity was draining energy levels, so we rode back to town to get cleaned up before dinner. 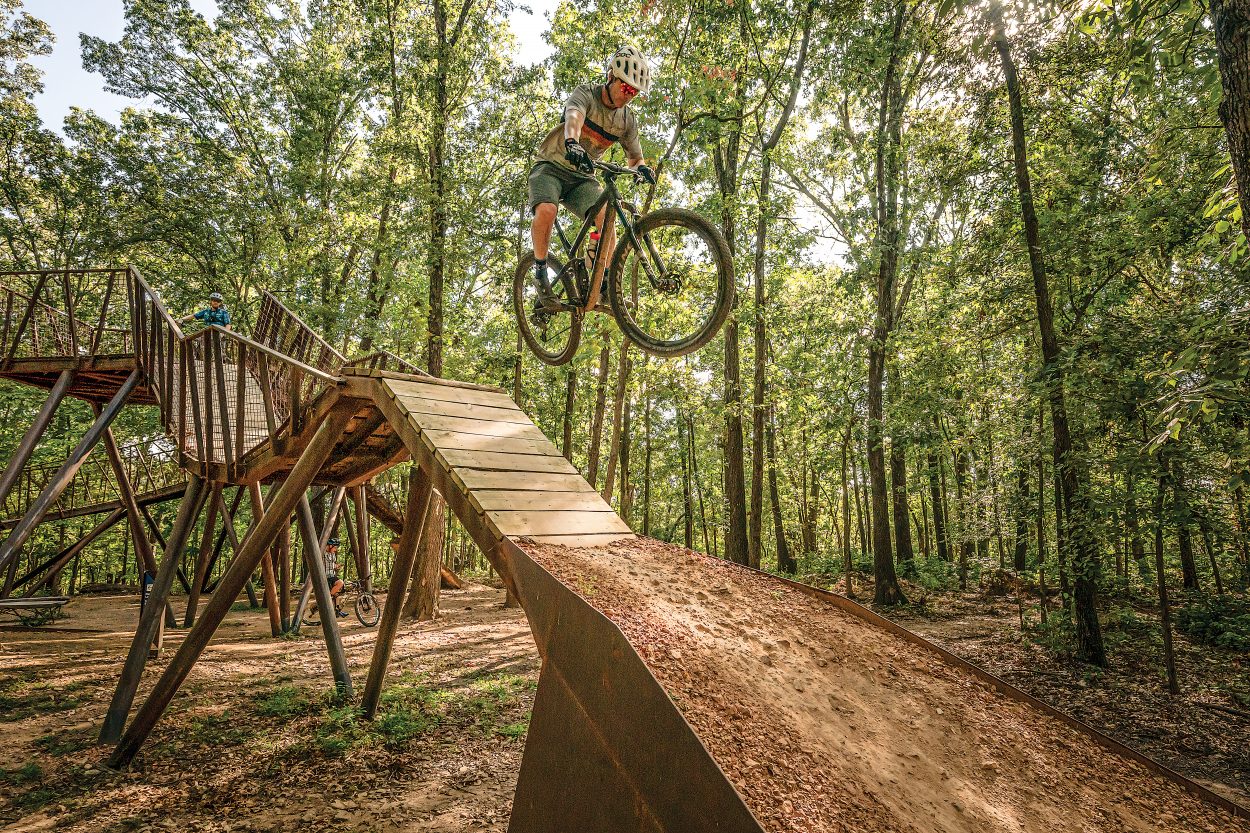 Seven-time NASCAR Series champion Jimmy Johnson airing it out off the hub in the Coler Mountain Bike Preserve.

As the crew rolled into Oven & Tap, the party was getting started and life was coming back into all of us. Sharing stories of the fun we had throughout the day, we enjoyed some cocktails and had some laughs. After dinner, everyone was getting a second wind and wanted to go hit a bar. After a short 1-minute walk, we posted up at Scotch & Soda for a drink—everyone except Hucker that is. He went to grab his BMX bike and give us some entertainment by doing tricks down main street in front of the bar. Jimmie had just bought us all a very nice Tequila sipper, and as we walked out to the patio bar, Hucker came riding past, standing on his handlebars. We all cheered him on, laughed and watched as he rode down the entire block. In typical Hucker fashion, he rode back to all of us and gave out some high fives. We were all cracking up and partied until they kicked us out a couple of hours later. 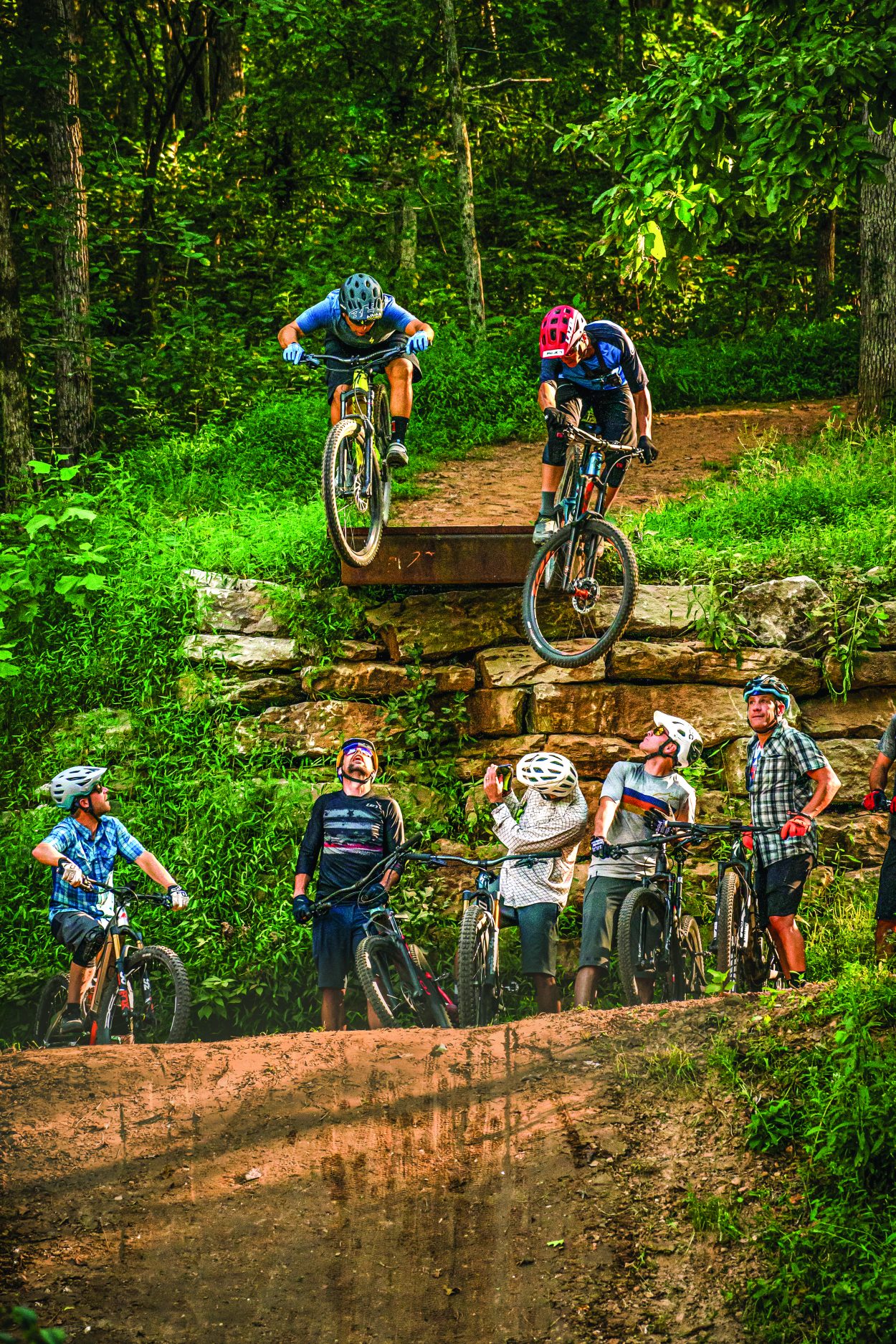 McGrath and Lopes doing their best to duplicate the BMX battles they had when they were 11 years old.

Hucker, Peaty, Hans and Tim all had other commitments and were out for the day’s ride. Hucker actually had to catch a 5 a.m. flight, and I’m amazed he could even get up in the morning, which made me question whether he even went to sleep that night.

We did, however, have one new important guest join us to go ride the 11 Under Trails in Bella Vista, and that was Tom Walton. Tom and his brother Steuart are the main reasons northwest Arkansas is building hundreds of miles of new trail. The entire cycling community is benefiting from their vision, and we all have them to thank.

Most of the trails we rode on this day weren’t officially even open yet, and because of a recent storm that came through a couple of weeks before, we were doing some tree removal along the routes. Again, the terrain and construction were different from the other areas we had ridden. These weren’t super technical. There was not a lot in the way of jumps and berms. It was mainly flowy XC-type singletrack. Our route took us past an amazing waterfall, alongside a golf course, past a concrete pump track, through a mobile home park, across a man-made bridge built into a cliffside, then to a secret locked cave that was a highlight ending. Gary brought the key along and gave us a tour of this historic underground speakeasy that was used during the prohibition days. Bands, dancing, and alcohol—if only those walls could speak. 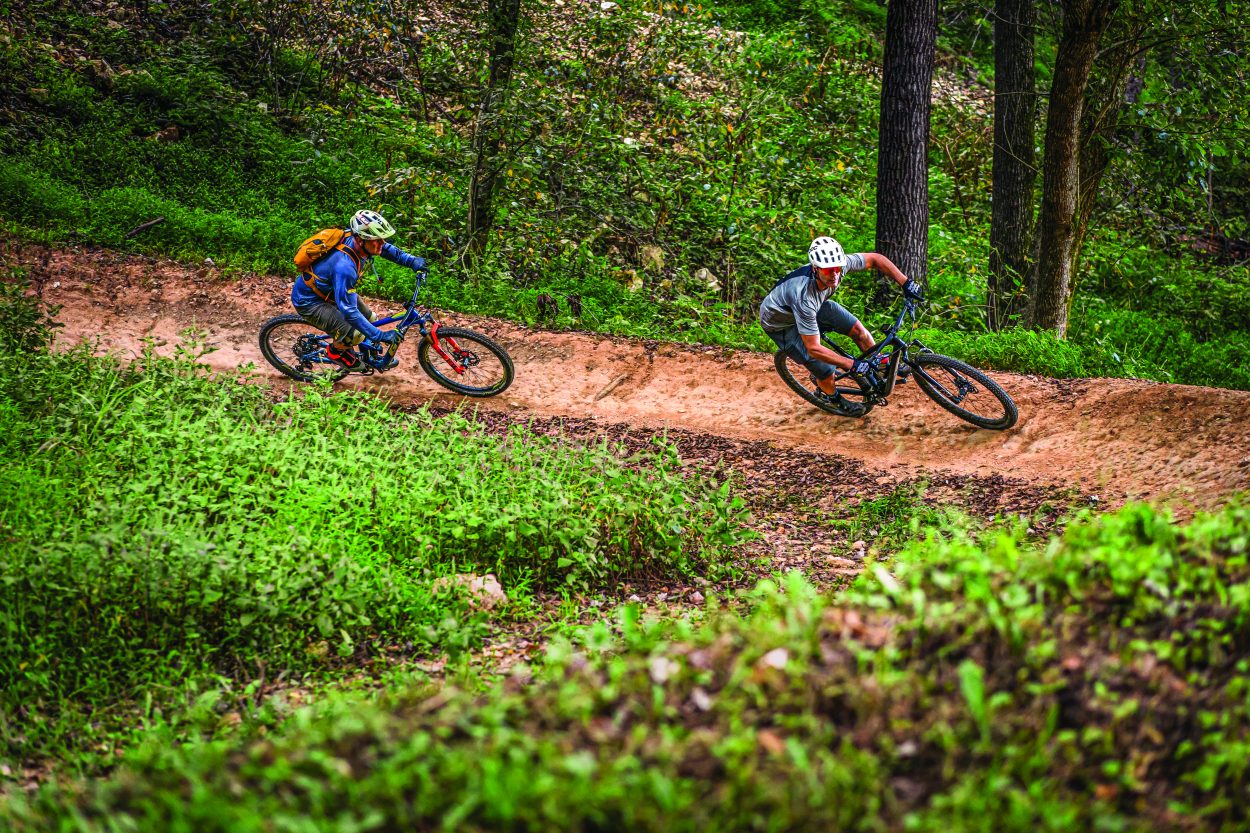 After the cave, we rode straight to Table Mesa in town for a quick lunch before everyone had to pack up and head to the airport.

In the end, I’d say the first edition of the Arkansas All-Star event was a huge success. A good time was had by all. Everyone was blown away by the trails, and they exceeded our expectations. All agreed that this needed to be an annual gathering and that we needed to make it bigger and longer. I’m looking forward to it next year, boys. Thanks again for making the trip so special.