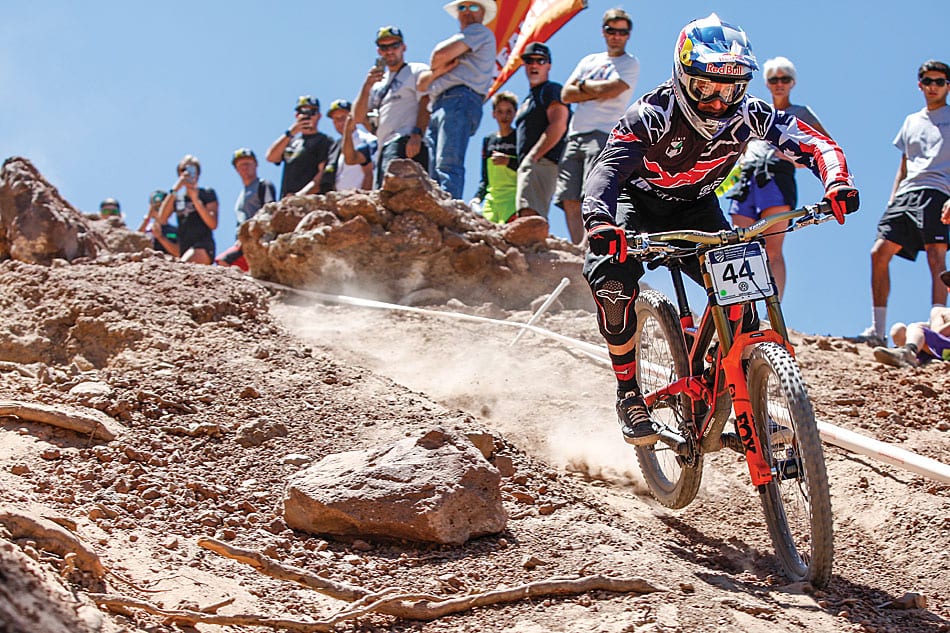 Gwinning: Aaron Gwin annihilated his competition in the Pro Men’s downhill event, winning by almost 10 seconds over his closest competitor.

America’s top racers came together at Mammoth Mountain, California, to see who would be crowned national champions for 2016. The racing was epic, with more than a few surprises for the riders involved.

While the race was held nearly 8000 feet above sea level, the hot summer weather pushed temperatures up into the 80s for much of the racing.

National titles were up for grabs in cross-country, downhill, short track, dual slalom and enduro. Racers of all ages were welcome, and stars-and-stripes jerseys were won by dozens of riders of all ages in all disciplines. 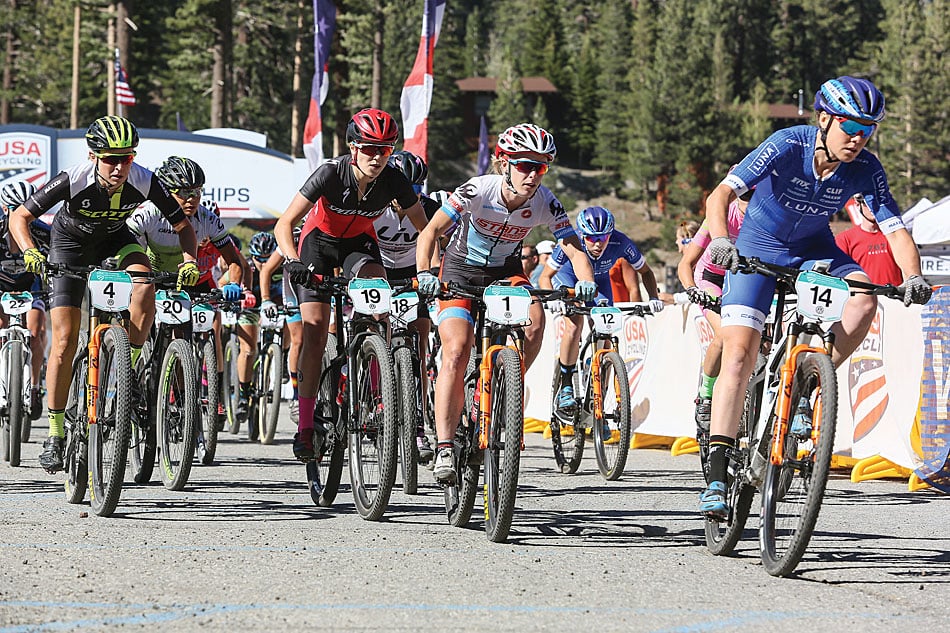 Front line: Erin Huck (4), Kate Courtney (19), Chloe Woodruff (1) and Georgia Gould (14) take off for the start of an epic battle among the Pro Women. 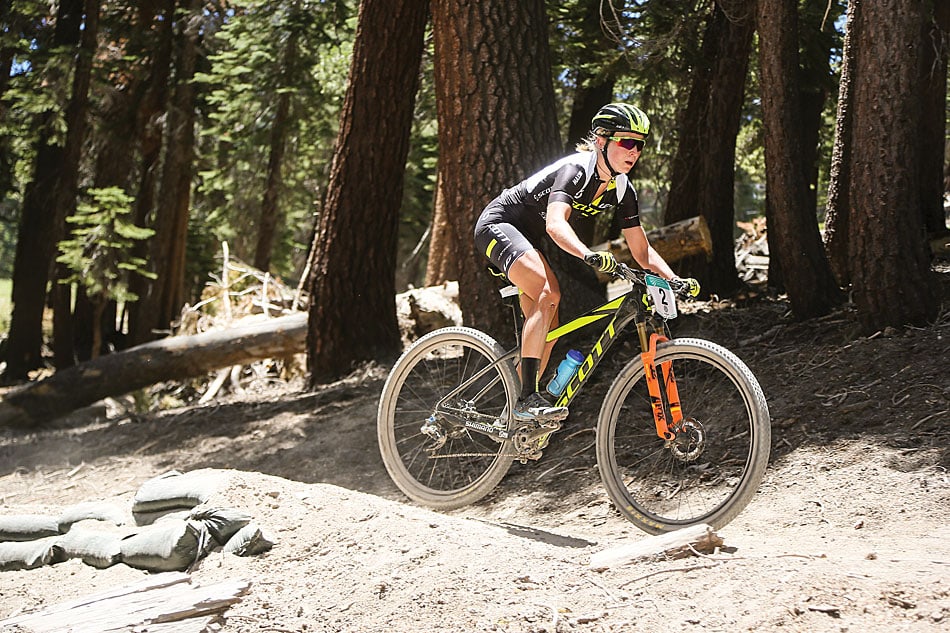 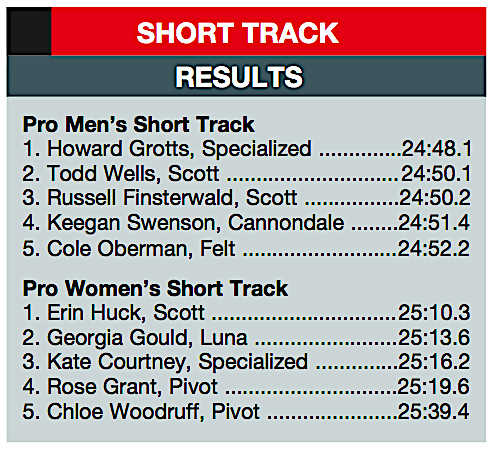 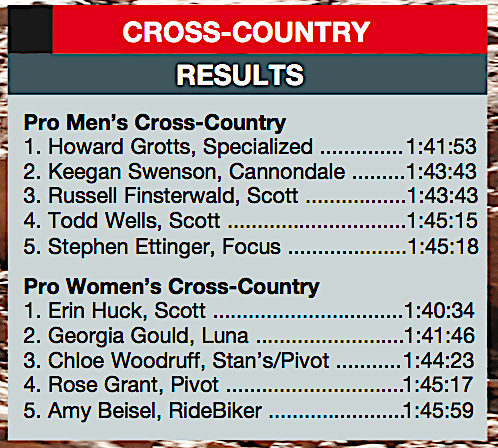 national champion and Olympic pick Howard Grotts made short work of his competition on the mountain, taking home national titles in both the cross-country and short track events.

In the Pro Women’s ranks it was Erin Huck’s time to shine. The 35-year-old Scott rider, who studied mechanical engineering in college and now works as a project manager for a biomedical device company, has been on a tear for the last couple of years. Huck won both the pro cross-country and short track classifications here. 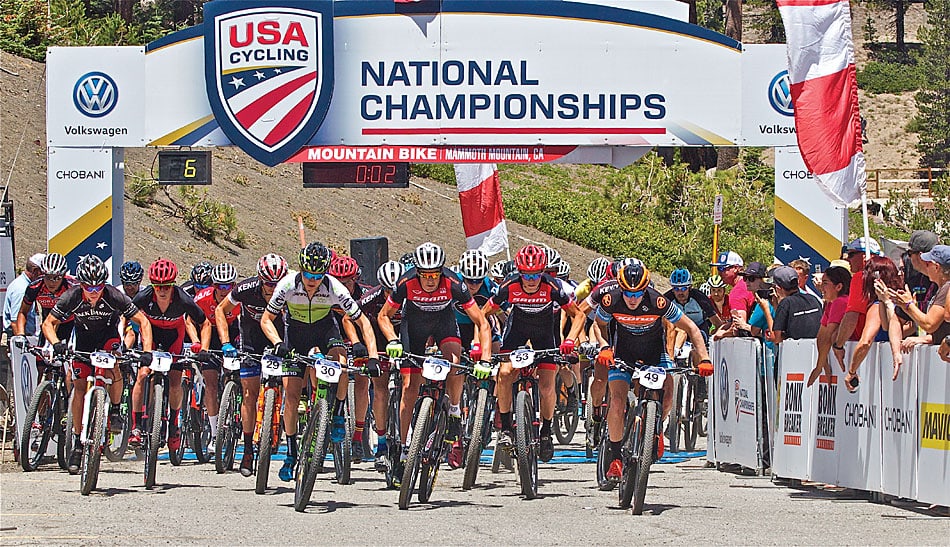 New blood: Keegan Swenson (30) and Todd Wells (10) led off the start of the Pro Men’s cross-country race. Defending national champion Howard Grotts (1) started out a bit slower, but came on like gangbusters later. 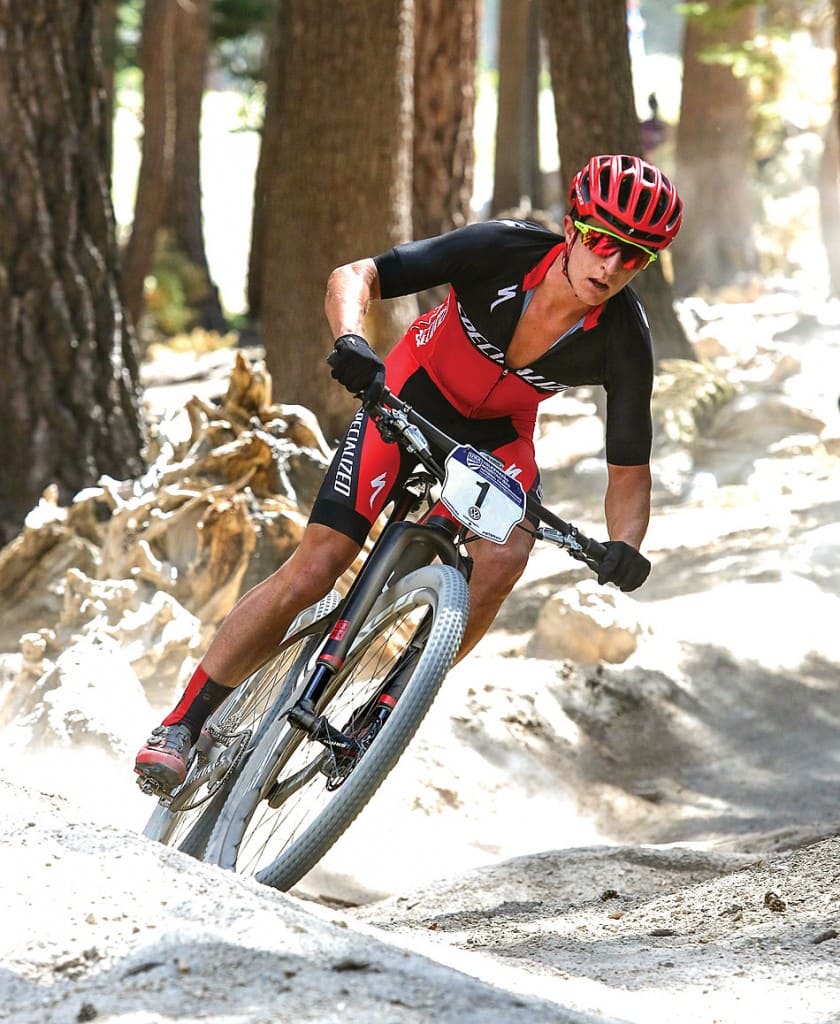 Double trouble: Once Howard Grotts got going, no other pro could catch him. Grotts ended up taking two national titles, winning both cross-country and short track. 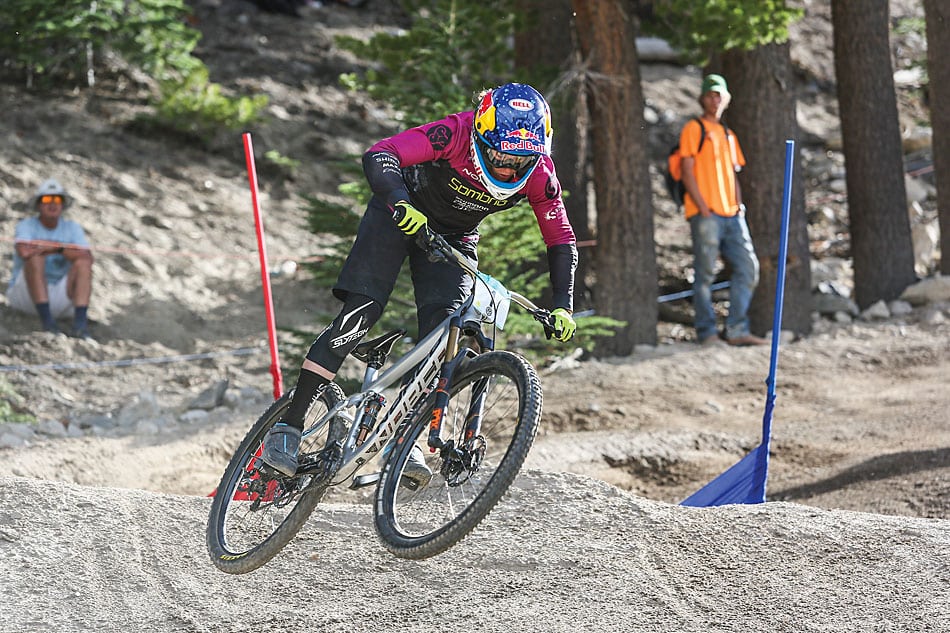 Adding to the collection: Jill Kintner claimed yet another national championship in the Pro Women’s dual-slalom category. 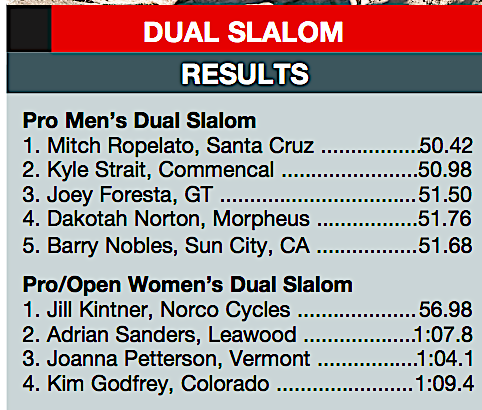 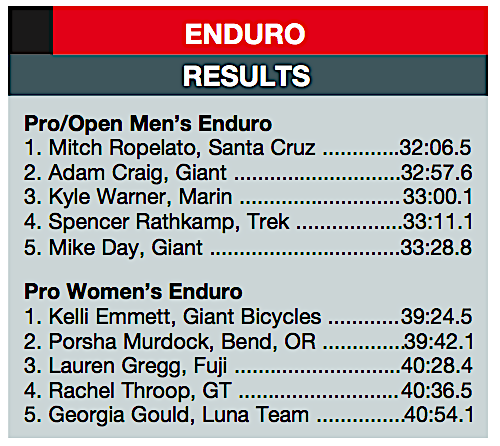 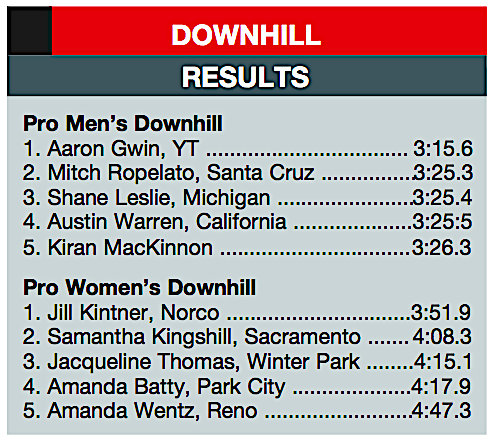 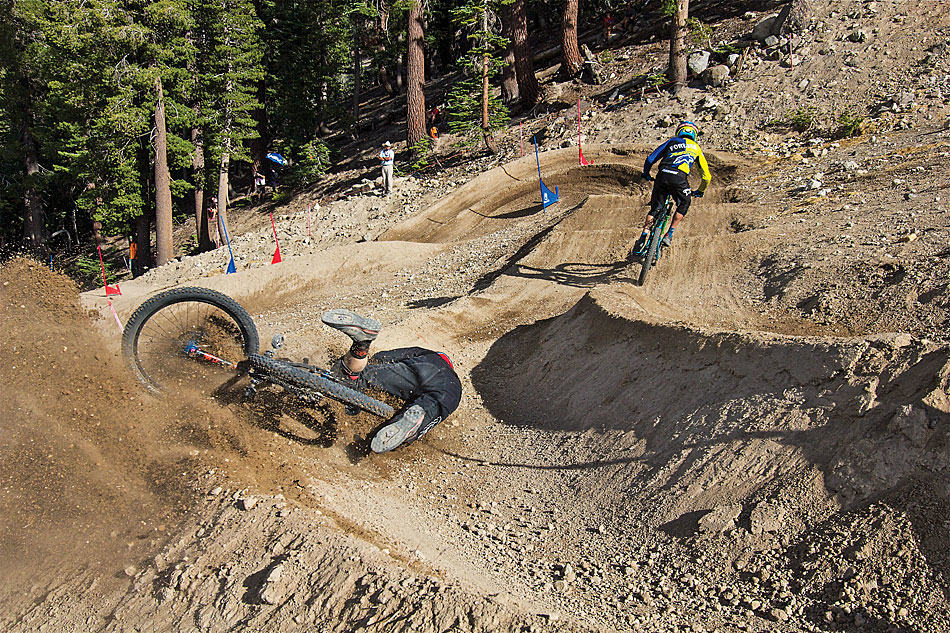 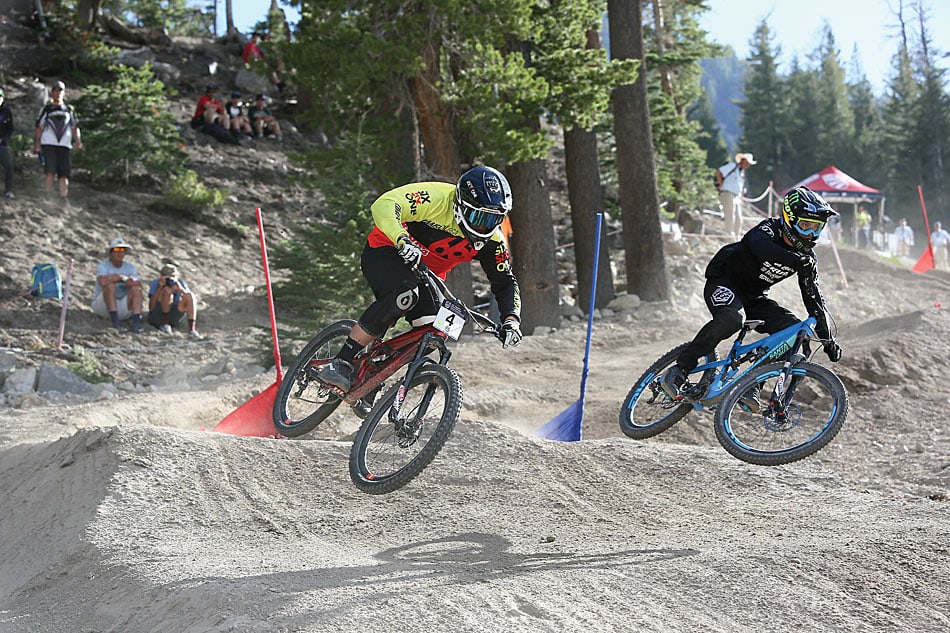 Epic battle: Kyle Strait (left) and Mitch Ropelato (right) had an epic battle in the finals of the Pro Men’s dual slalom, but Ropelato came out on top. Ropelato would win the Pro Men’s Enduro class as well, sweeping all four stages of that event.

With the World Cup events being the major focus for Aaron Gwin this year, it was great to see him show up to compete in the Downhill National Championship. Aaron has been beating the world’s best racers the last few months in the international race series, so we weren’t sure if he’d even bother to race the nationals this summer. 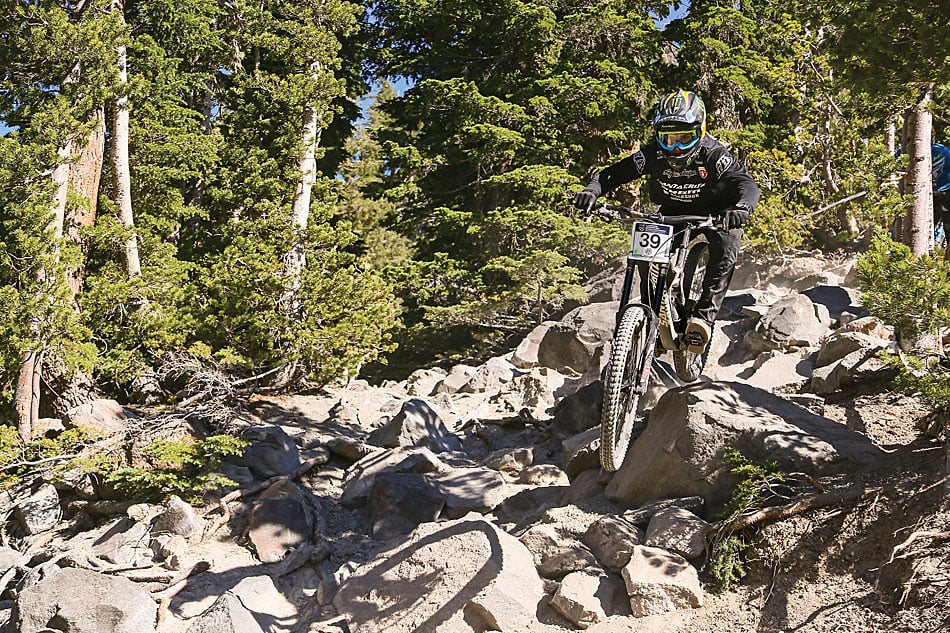 Almost perfect: Mitch Ropelato took second in the downhill, but he won both the enduro and dual-slalom titles.

To no one’s surprise, Gwin annihilated the competition at Mammoth this year. The second- through tenth-place riders in the Men’s final all finished within 2.5 seconds of each other. Gwin was in a different league entirely, though. He was a full 9.7 seconds faster down the mountain than the guy who took second this year, Mitch Ropelato. Gwin is so incredibly fast, it’s like he’s from another planet. There’s a reason he’s dominating the World Cup series— he’s flat-out amazing. It seems like Gwin is on a whole different level from everybody else in America.

For his part, Ropelato was impressive, too. Besides taking second in the downhill, Mitch would go on to take the wins and the national titles in both the dual-slalom and the enduro categories. 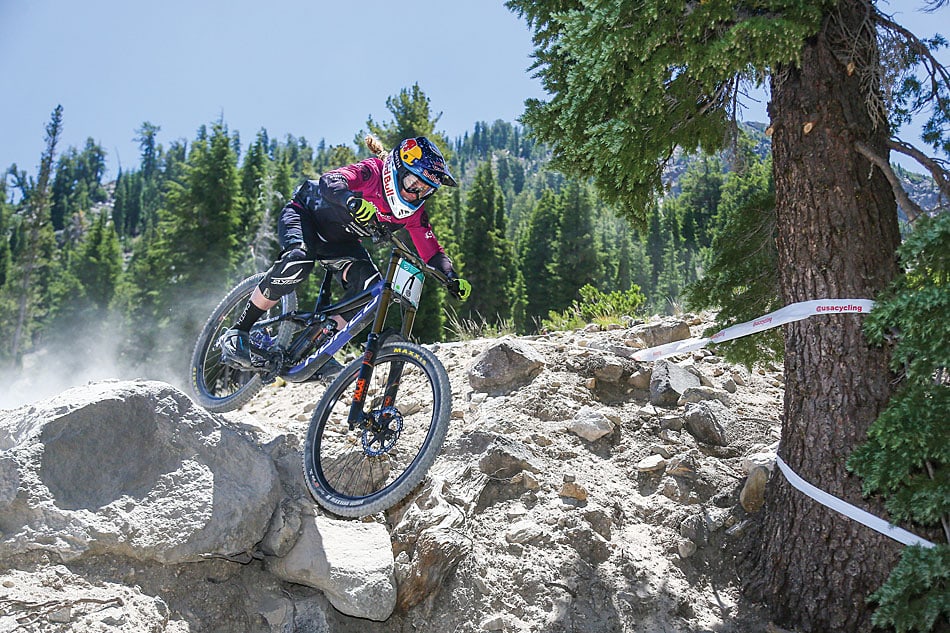 Jill Kintner was also good for two titles, as she took home the national titles in both downhill and dual slalom this year at Mammoth. She might have gone on to win a third national title in enduro if she had been up to it, but she elected to skip that event after having already won twice. 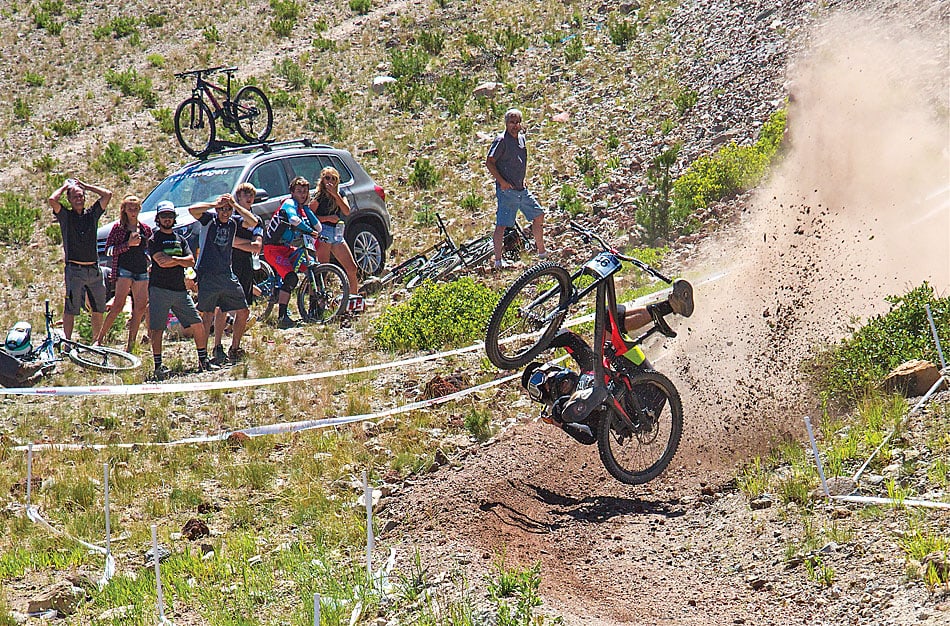 Tough break: Downhill racing has its dangers. This unfortunate rider reportedly came away from this crash with a broken collarbone.

There is one other rider coming up through the men’s gravity ranks who looks like he has the potential to become a major star in the coming years: GT’s Joey Foresta. Joey first caught our attention at the Sea Otter Classic this spring when he finished second in the Pro Men’s dual slalom there. Joey shocked us then because he was only 14 at that race. He was still only 14 at this one, too (he’ll turn 15 soon), but he ended up placing third in the Pro Men’s dual slalom, right behind winner Mitch Ropelato and runner-up Kyle Strait. 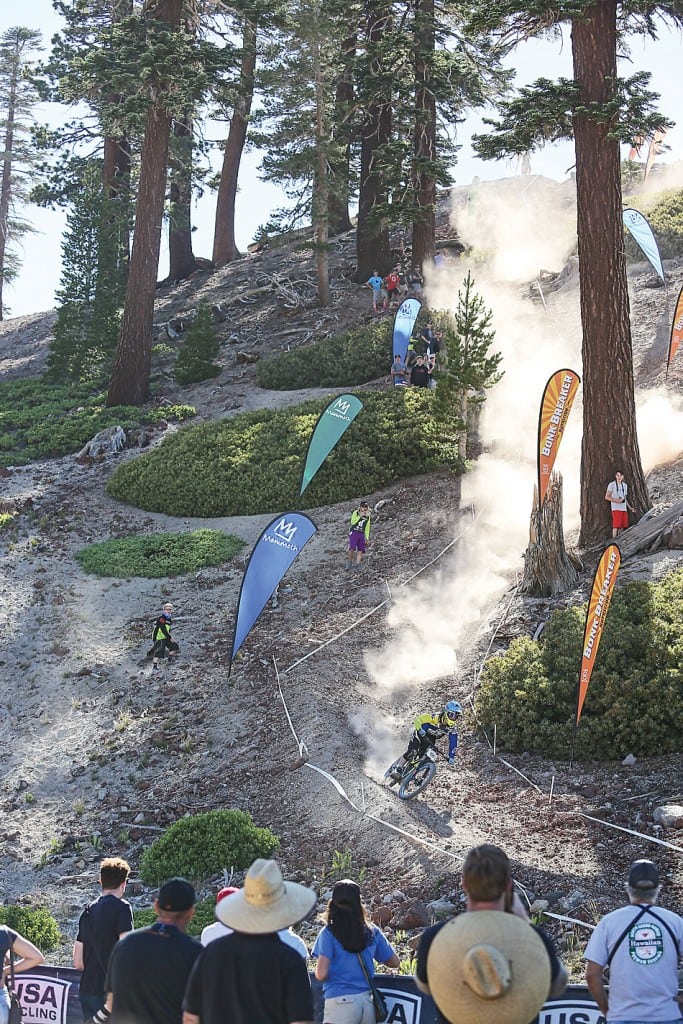 Rising star: Fourteen-year-old Joey Foresta won his age-group national title in down-hill with a run that looked like it belonged in the pro ranks. He’ll be there soon enough. He’s already one of the top pros in dual slalom.

Foresta also raced downhill at the event, and though he raced in the Junior Men’s 15-16-year-old ranks, which are based on riders’ ages at the close of the year, Joey’s time would have put him in 32nd place in the Pro Men’s division. That’s not too shabby.