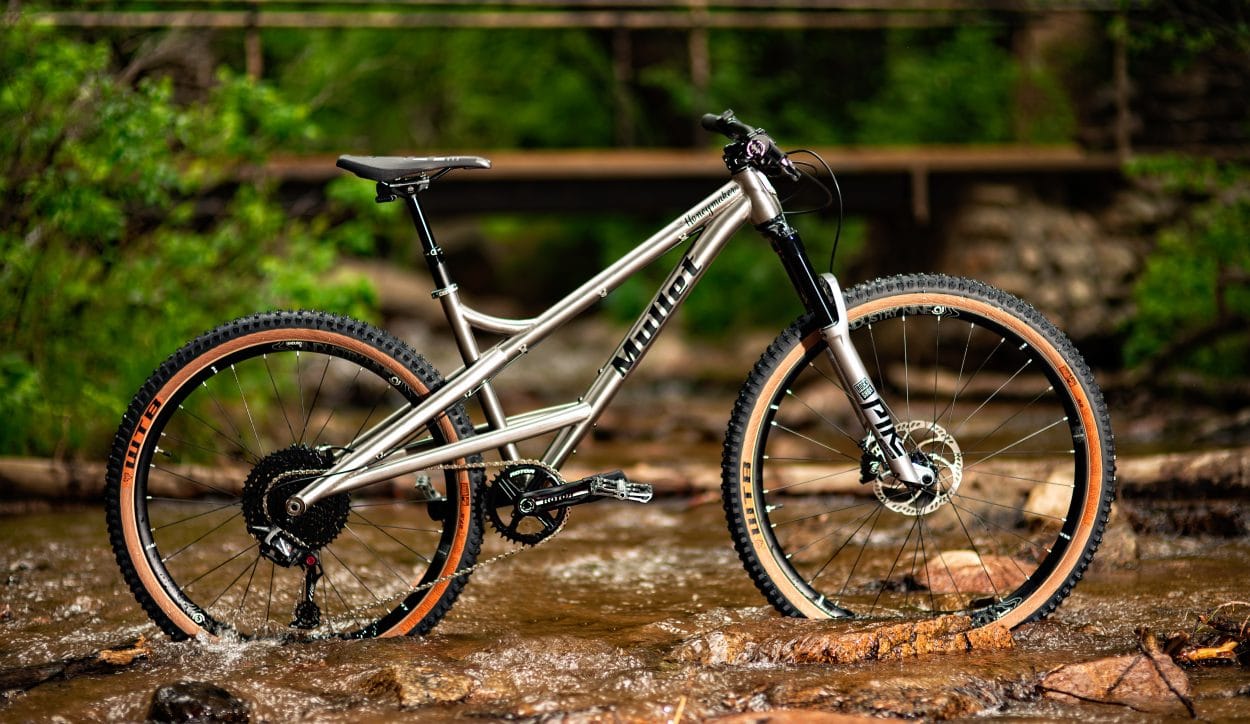 The makers of Mullet Cycles provided the following explanation of the development of their  29/27.5 mixed-wheel-size bike:

Near the US Olympic Training Center and at the base of Pikes Peak comes a new bike company out of the “Ordinary.”  Little did we know while everyone was talking about and testing a 29’’ front with a 27.5” rear wheel, somebody has been working on this platform since 2012. The recent UCI rules change opened everyone’s eyes to running the “Mullet platform” and these guys have optimized it.

Michael Vidovich out of Manitou Springs, Colorado is one of those guys. Some know him as an advanced moto rider, others know him as an ace mechanic for motorcycles, suspension, mountain bikes and aircraft. People on the School Board know him as the VP of the Automotive Institute of Science and Technology. But many may not know him as the guy who brought the “Mixer” model to a small American fabricator. 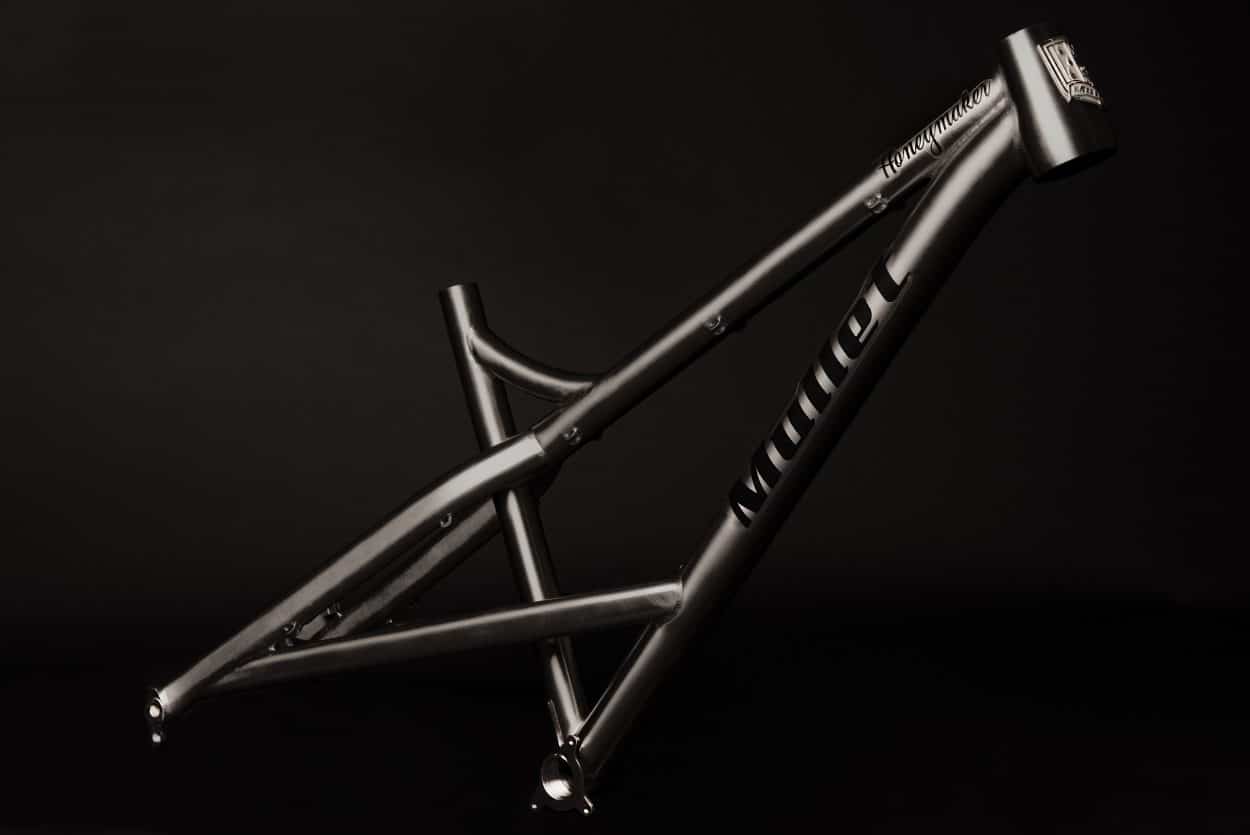 In 2012 Mike V., opened up his own bike shop called Timberline Cycles in Colorado Springs. He managed a number of bike shops and wanted to bring in obscure brands that were doing things differently. To be more specific, he wanted to carry every full-suspension linkage in order to learn their advantages and disadvantages.  With a “RaceTech Suspension Certification” and being a demanding rider himself, carrying these brands was a major perk of owning a bike shop. He was also the exclusive dealer for a Spanish Motorbike company called GasGas.

It was in early 2013 and with the introduction of the 27.5’’ wheel that a serious light bulb went off. He lined up a 29’’ wheel and a 27.5’’ wheel next to a KTM 250XC he was repairing. They shared an almost identical outer wheel circumference front/rear. Many sleepless nights followed and Mike V. was working on geometry that would work for a mountain bike. Once he dialed in his data points he reached out to a number of bike companies to see if they’d be interested in making his mixed wheel design. None of them were; many said he was crazy. Luckily, the last company agreed to manufacture them, but only if Mike would purchase an agreed quantity himself that would make it worthwhile for them. Based on the agreement, the model would be exclusively sold through Mike’s shop, Timberline Cycles.  Mike began improving the geometry when suddenly the rug was pulled out from him and the contract was broken. Putting all his eggs into one basket meant he was no longer carrying any other brands. As a result, he had to close Timberline Cycles. Feeling deflated and embarrassed for himself and his family, in comes Miles Schwartz. Miles has been in the mountain bike community since the 90’s and is the owner of a small cycling accessory company called Mile Wide.

As Mike V. was closing his doors for good, Miles came in to drop off free swag and talk tech, since he had heard of Mike V.’s penchant for building radical bikes.  Miles noticed an empty shop and immediately thought he knew the story. However, Mike’s story was different. He wasn’t burned by the internet. It was his supplier that did him in. It was painful for Mike to recite the whole story. However, Mike was certain that if he’d get Miles to swing a leg over his bike, it’d change the way Miles thought about mountain bikes forever. Being a skeptic from New York, Miles believes most things are smoke and mirrors until there’s proof in the pudding. After throwing down some KOM’s and PR’s on trails, though very impressed, Miles was still not convinced. So he took out the steed he’s ridden everywhere- Pisgah, Windrock, Angel Fire, Trestle and Whistler. With considerable effort, Miles was certain he would beat every time posted on Mike’s machine. However, as the Old West saying goes, “There’s a big difference between the Ox and the Whippletree”. After dozens of sanity checks, he was met with slower times. Miles then realized what Mike created wasn’t a bike; it was a “Mullet.” The platform felt different, special, and advanced; Unbecoming to the mountain bike wheel-size debate. Despite the “Ordinary” looks, it performed better than any symmetrical wheel platform (a.k.a. “Safety Bike”) was capable of. 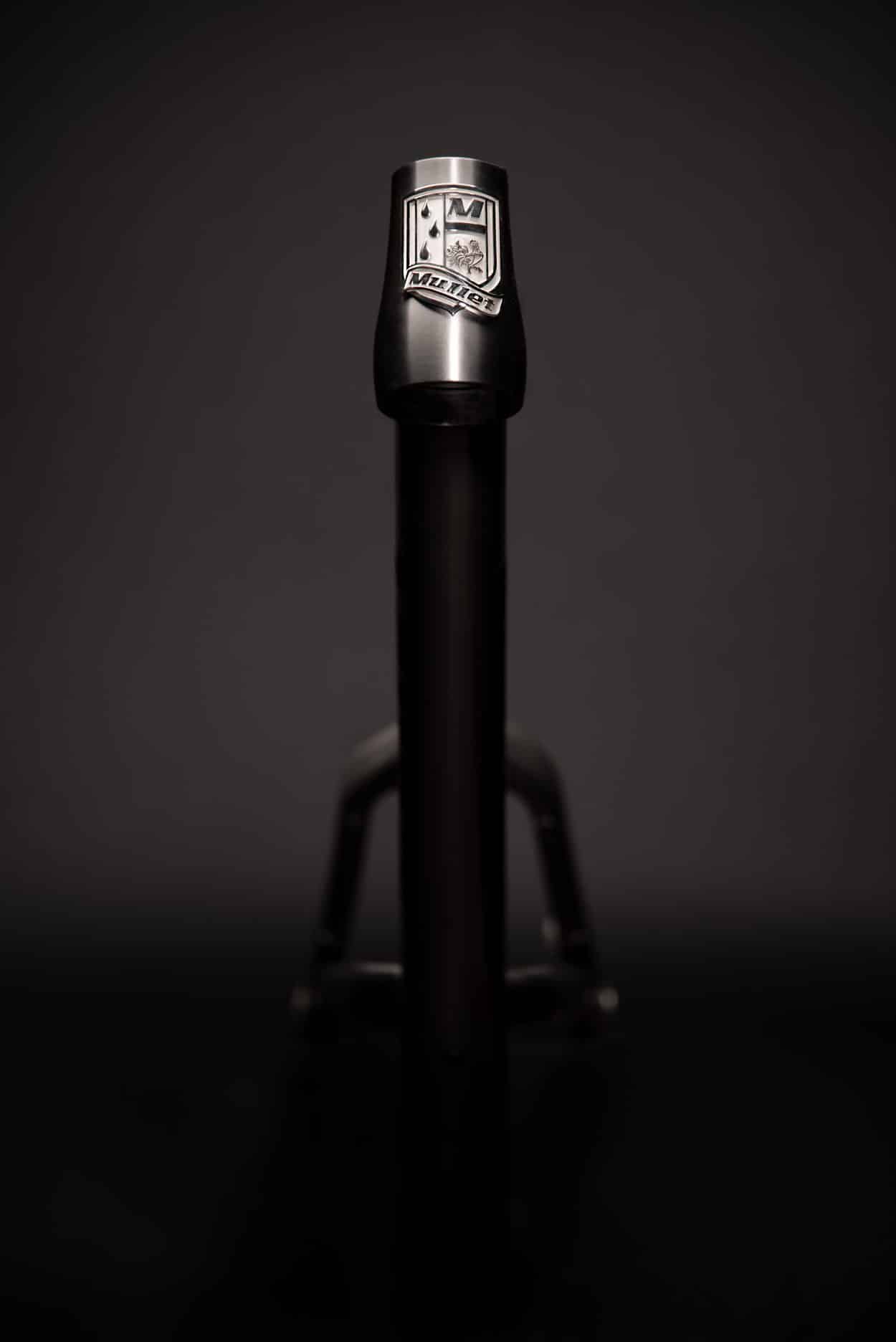 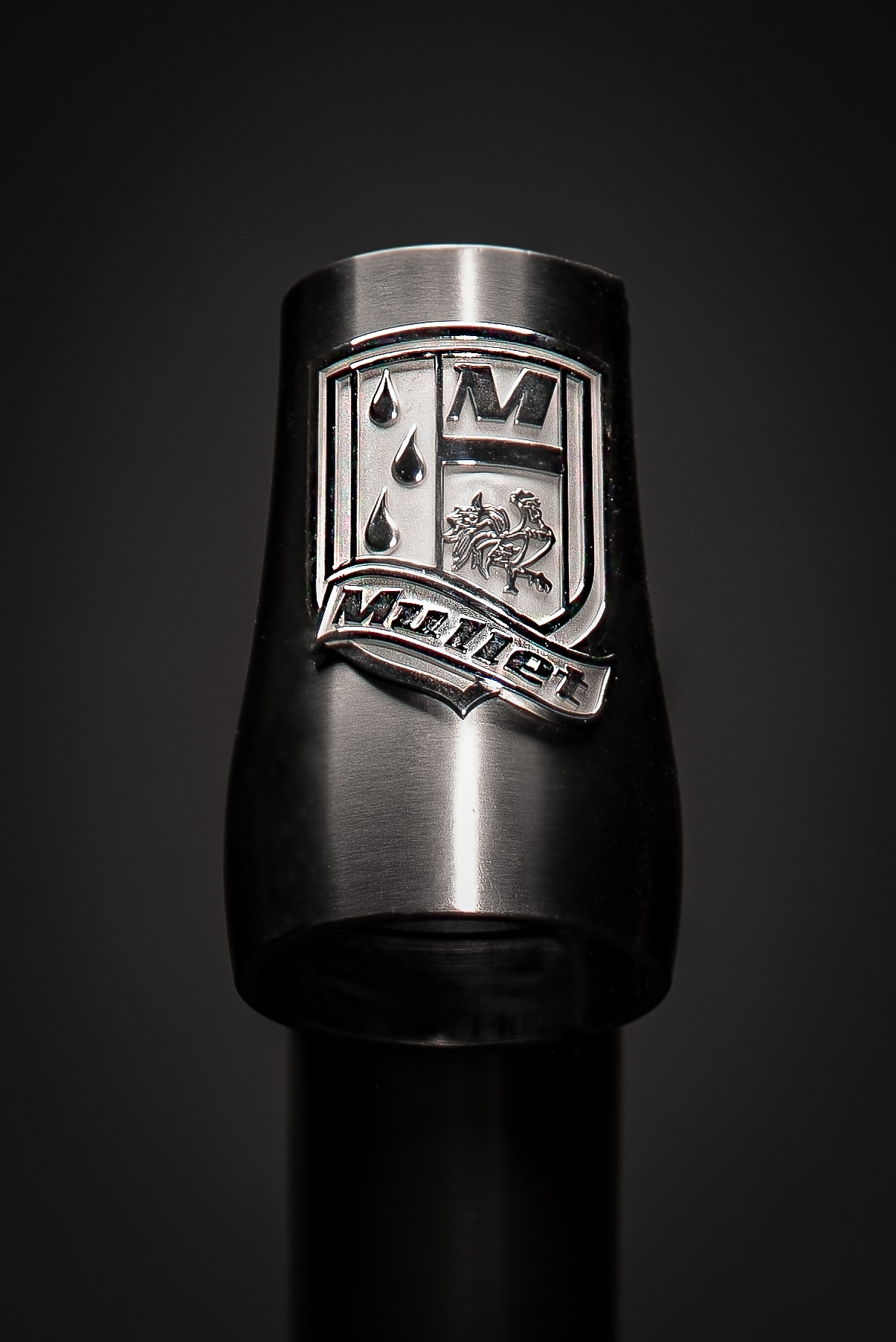 Mixing wheel diameters enabled Mike V. to tune Force Vectors and Scrub Radiuses through optimized geometry. Wheel diameter manipulation has been adopted in almost every industry devoted to “speed” except the bicycle.

We have to start at the beginning. And when we say beginning, I mean the first pedal bike known as the “Ordinary”, “Big Wheel” or the most popular nickname, the “Penny Farthing”. This name came from British currency, the penny coin being much larger, with a farthing coin trailing behind. They were very unsafe. However, during this period it was thought that by having a larger front wheel you could go faster. They were right to a point. But those pedals were fixed to the front axle, and if you had to come to a sudden stop, you’d fly soaring 8 feet into the air. They were most suited for tall, slender men.

During the late 1800s, there was a powerful women’s movement taking place. What first started as trading in their corsets for “bloomers” begat the ultimate freedom of riding bicycles. Since women weren’t allowed to operate motorized vehicles, the bicycle was also a revolutionary method of transportation. Roads weren’t built for cars yet, and with such large demand, there needed to be a “safer” bike for the general public. In 1885, John Starley came out with the “Rover Safety Bicycle.” Mr. Starley designed his bicycle using two wheels that shared an equal diameter of 26’’ front and rear. 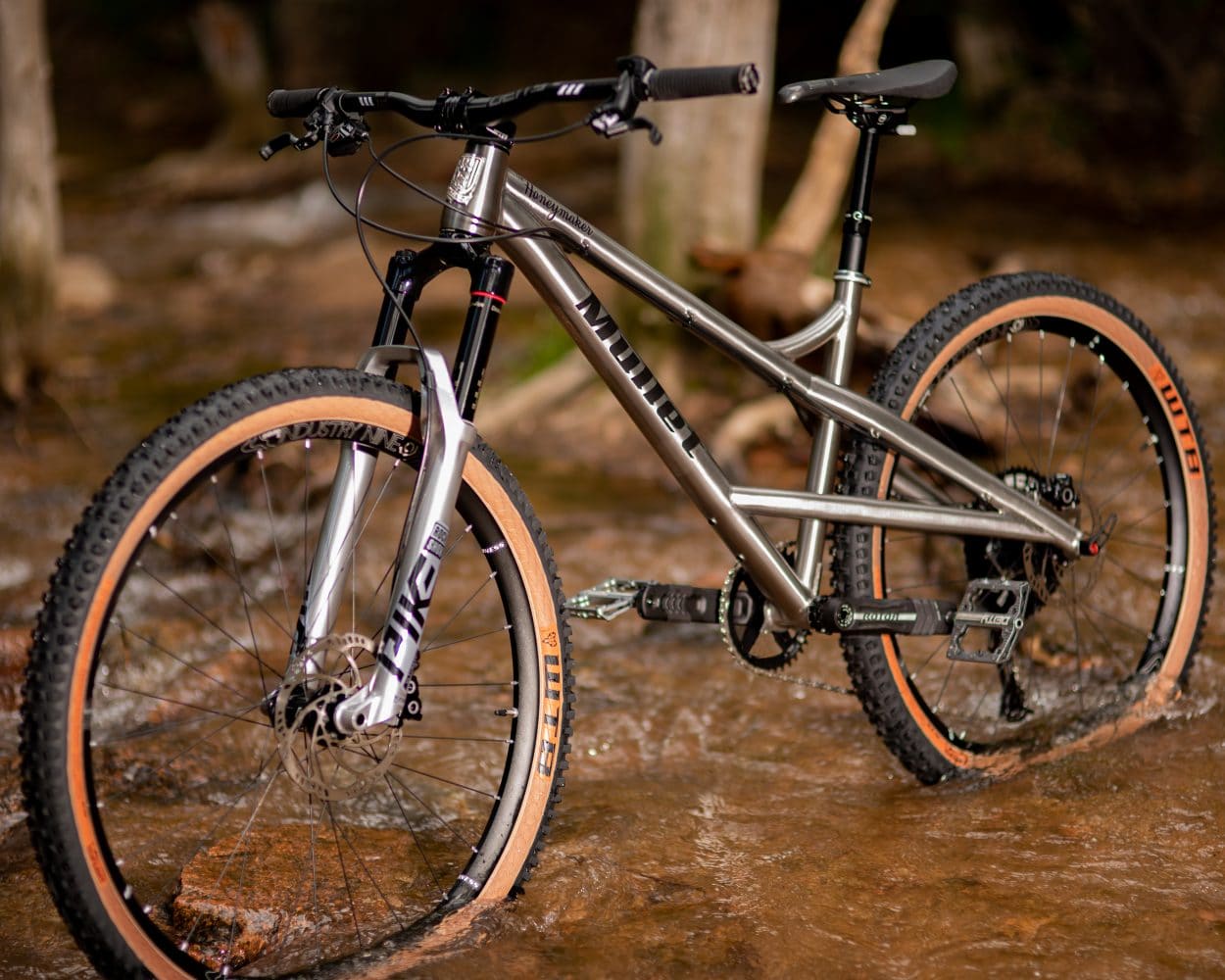 His Safety Bike design enabled bicycles to be lower to the ground, more stable and easier to mass-produce than the “penny-farthing” bikes. With a chain, it was capable of having different gears or “speeds.” The modern bicycle and mountain bike are still based on this “Safety Platform”.

Bikes were evolving to go faster on the road. The Tour De France was and still is the most popular bike race in the world. Skinny tires, big wagon wheels and heavy steel to help break the wind was the trend. Other than updating components and composites, the modern road bike hasn’t changed since the 1940s. Motorcycles have evolved COMPLETELY since around the same time.

With the introduction of the “Safety Bike,” many nations were looking for an “iron horse”— a vehicle a soldier could use to deliver military strategies without getting shot down (a horse was an easier target than a soldier). During WWI, every nation had supplied bicycles to their infantry soldiers. Since the bicycle was so successful in WWI, nations sought to create a motorized bicycle during WWII. From the combustion motor and clever ingenuity, the first motorcycles were born out of necessity, on a “Safety Bike.” [Editor’s note: The first petroleum-fueled motorcycle was developed in 1885.  During World War One, the American army regularly used motorcycles for delivering messages to the front lines of the conflicts.] After the wars ceased, soldiers came home with these early motorcycles and began off-road racing in Europe in what they’d call “Scrambling”. Since humans have a need for speed and competition, innovation began to make motorcycles faster, safer and more stable from 5-150mph. Since we’re focusing on dirt bikes, it wasn’t until the 1970s (30 years later) for the industry to establish a wheel standard of 21’’ front to an 18-19’’ rear. Still to this day, it’s the most common wheel platform found on dirt bikes. 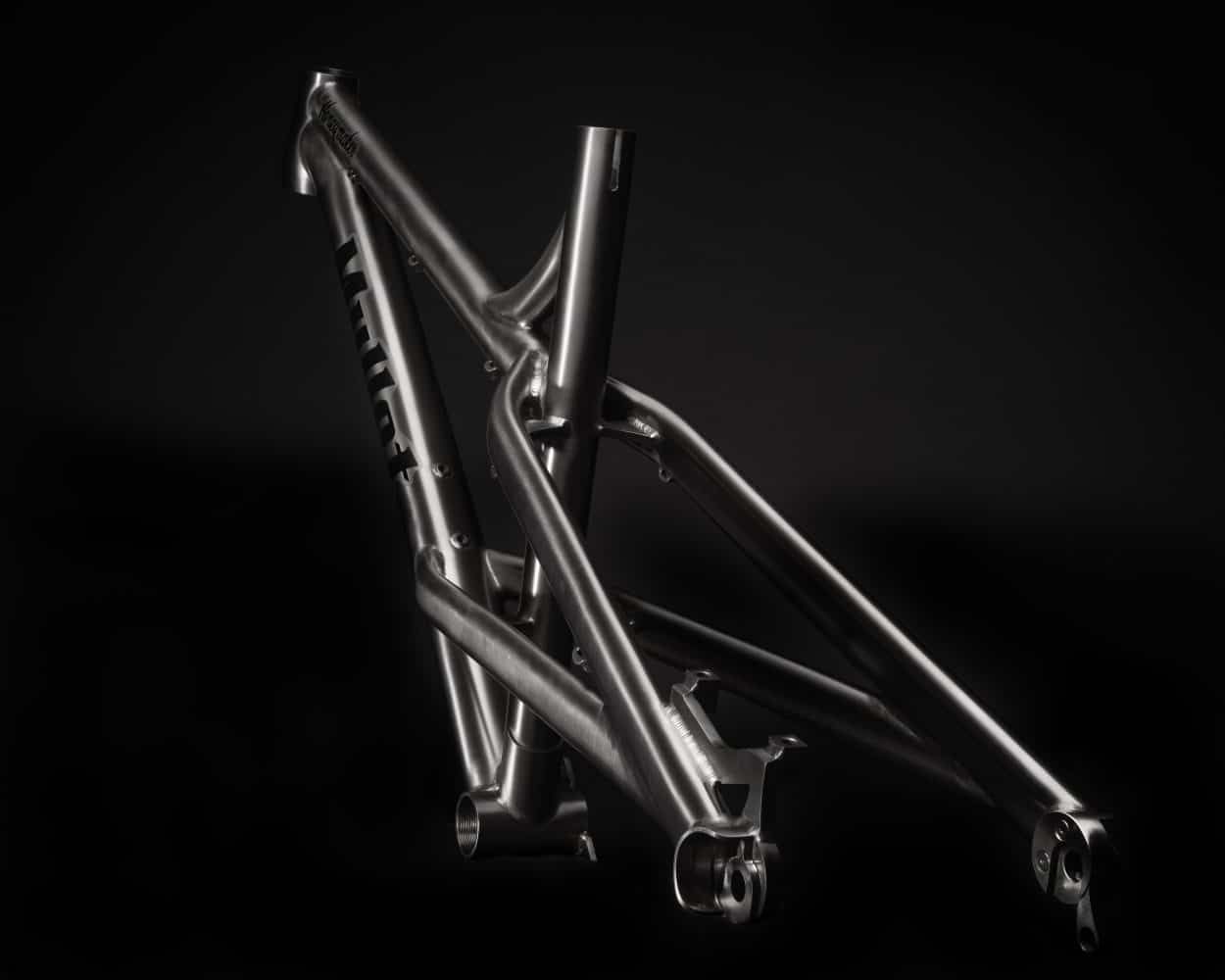 By optimizing “pitch”, it enabled the front wheel to travel over obstacles with limited force of the rear wheel pushing forward. By having a smaller rear wheel, going over the handlebars also became less common. Think of a boat getting on plain having a much easier time going over large waves than if it’s up on plain (flat, equal, symmetrical). When a boat is on a level plane it smashes through the waves instead of traveling over them. The smaller rear wheel also enables the bike to turn with less effort by reducing its turn-in radius (which results in less forces pushing on the front wheel). This is how trailers with smaller rear wheels are able to complete tight turning radiuses. Bicycles with symmetrical wheels become hard to turn around 25mph unless head tube angles are extremely slacked. Then the bike has trouble handling at slower speeds. This is why we see different bicycle models for different speeds. An XC bike handles well at low speed, Enduro at moderate speed, and a Downhill bike at high speeds. Mullet Cycles claims their Honeymaker hardtail is a supreme handler of all those speeds. The Peacemaker 160mm full suspension is even more lethal in the right hands.

Why has it taken so long for us to get to this point?

Like the dirt bike industry, the mountain bike industry isn’t that far off on the timeline. It took dirt bikes around 30 years to find their standard wheel platform. Mountain bikes first appeared in the late ’70s with radical guys like Mike V. taking their beach cruisers, “Clunkers,” up into the California mountains and bombing down. First, we had “Breezer” bikes; then bicycle manufacturers from the ’80s, such as Panasonic and Shogun, took wind of this and began putting knobby tires and smaller wheels on their road bikes. Other than those enhancements, they were road bikes and people accomplished incredible things on them. The first major innovation came in the early ’90s: forks and rear shocks. Forks used rubber elastomers and shocks used a spring, which needed linkages.  Thirty years later and suspension manufacturers have come a long way. However, 30 years later and bike companies are still claiming they came out with the best linkage for pedal bob, progression, small-bump absorption, anti-squat, etc. Basically the same selling points the suspension manufacturers tell us their product already does. 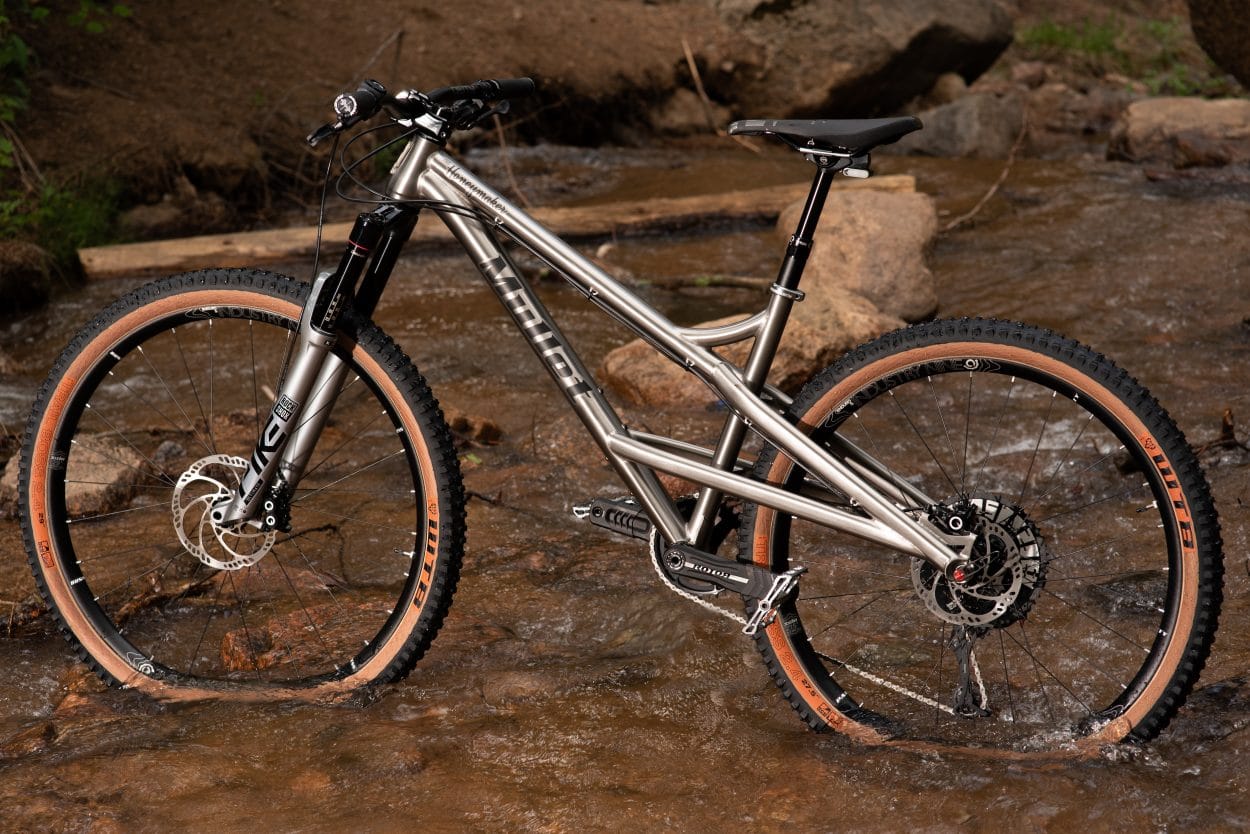 So what’s going on here?

Mountain bike companies have focused all their efforts on designing advanced linkages and geometry—only so Safety Bikes can handle better off-road. It’s time to focus on the proven dirt-bike platform.