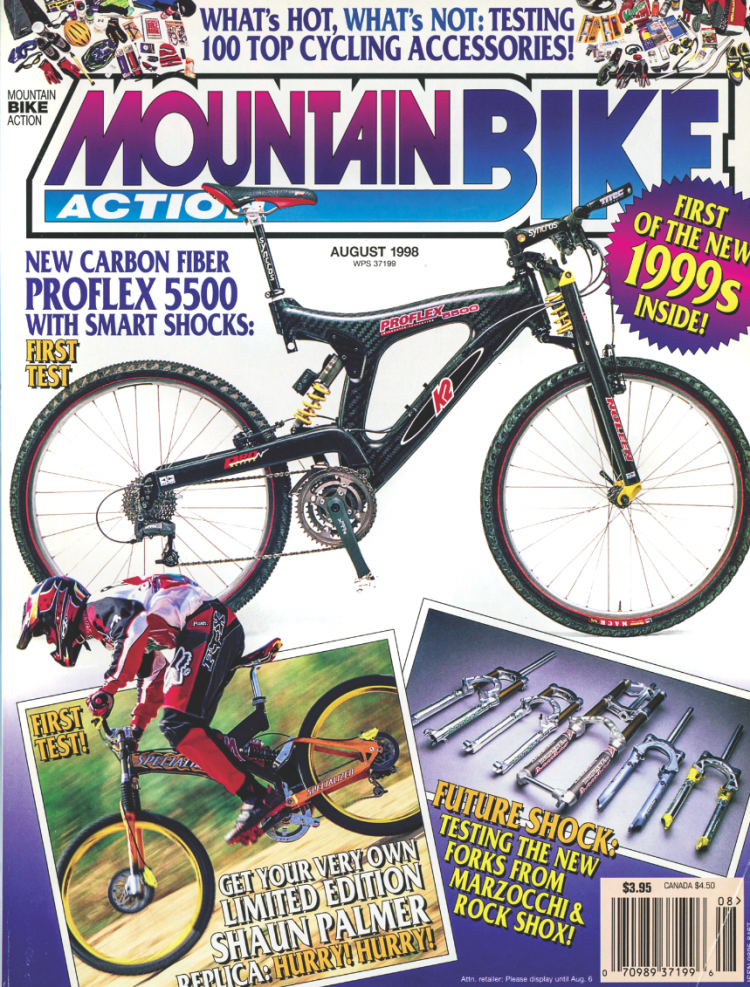 Twenty years ago, our August 1998 issue of Mountain Bike Action checked out some of the newest bikes and forks on the market. There was also an interesting “Happy Trails” column by Richard Cunningham, in which R.C. presented his case that hikers are actually responsible for causing more harm to the environment than mountain bikers. Richard pointed out that hikers can’t walk very far in a short amount of time, so roads, parking lots and rest areas are built for them in our parks and forests to get them close enough to walk to the big scenic attractions, while mountain bikers only need dirt trails in order to ride for miles into the woods to enjoy the sights.

We also had a test of the Specialized Shaun Palmer Replica downhill bike, in honor of “The Palm,” who was the top American male downhill racer of the time. The bike was a limited-edition model, with only 300 made for sale. They offered 6 inches of travel up front and 6.2 inches in the rear. The bikes were priced at $5399 a piece, which works out to right around $8250 in today’s dollars, after you allow for inflation. Rock Shox (now known as RockShox) increased the travel on its soon-to-be-released 1999 Judy cross-country forks to 100mm (3.94 inches).

Elsewhere in the issue, we tested the Foes DH Slammer, which offered 6 inches of travel in front and 7 inches in the rear. The bike offered a 68-degree head angle in the stock frame design, but custom angles were available, too, since the bikes were all handmade by Brent Foes and his team. Suspension travel on most mountain bikes in those days was generally less than what we see today, but it was steadily increasing every year. Nevertheless, even now, 20 years later, we still find many cross-country riders racing hardtails to trim weight from their frames and boost their climbing speed. Back then, just like today, anything that increased the weight of a bike had to improve another aspect of the bike— the price, the reliability or the performance—in order to justify the extra weight of the innovation and the extra effort needed when pedaling the heavier bike uphill.

Super 8: The Santa Cruz Super 8 was one of the longest-travel downhill bikes in the world when it came out with just under 8 inches of travel (190mm) in the rear. When paired with a 6-inch-travel fork, the head tube angle came in at just over 67 degrees. By comparison, the current Santa Cruz V10 downhill bike with 27.5-inch wheels offers a head angle of either 63.5 or 64 degrees with the use of a “flip chip” in the frame. 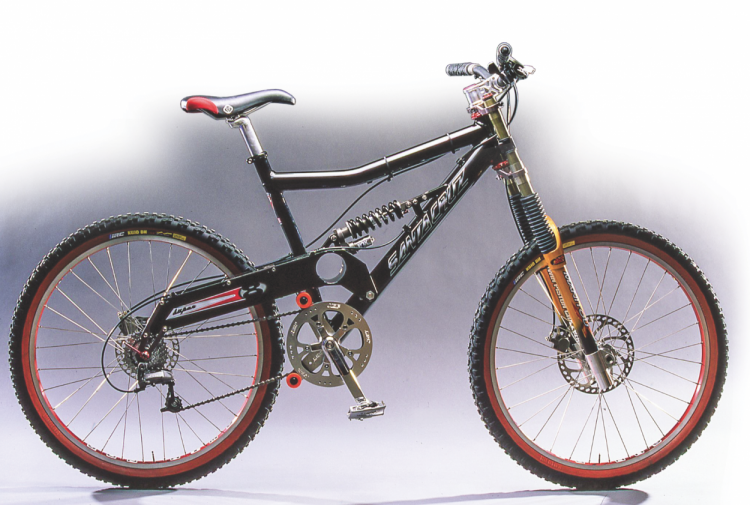 DBR: Diamond Back Racing came out with their X-Link frame design. The 7005 alloy aluminum bike came with a Fox Air Vanilla shock and 4.5 inches of travel. We didn’t get to weigh it at their introduction, but they claimed the bike would weigh less than 24 pounds in production trim. 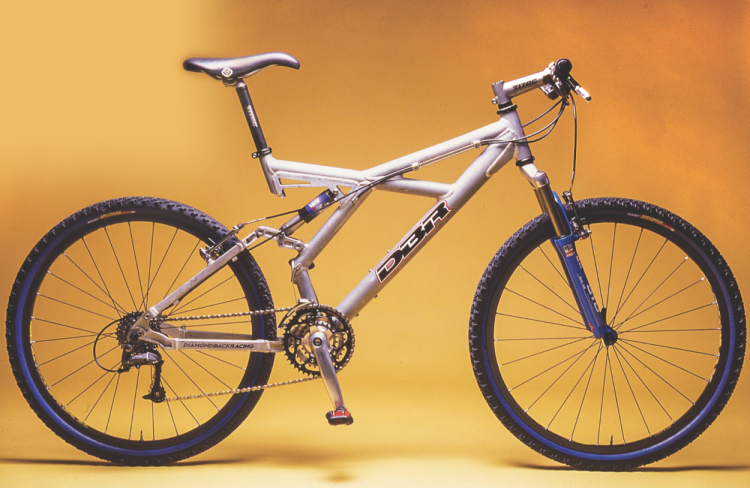 Knife fight: We probably don’t have to tell you how much travel the Kona Stab Seven had. If it didn’t have somewhere close to 7 inches, they sure picked a funny name for it. In the days when many bikes still offered head angles of around 70 degrees, this one reportedly had a “slack” 69. Kona had reportedly put a 5-inch-travel fork on this bike, as they were still waiting for longer travel forks to arrive. 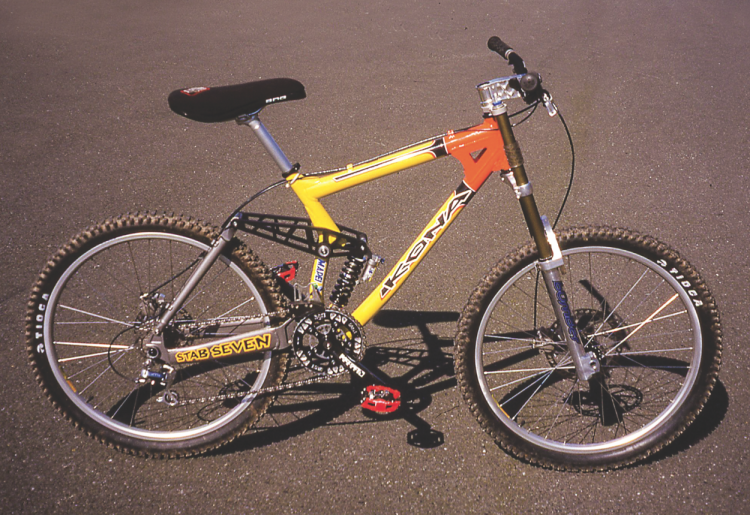 New from Rock Shox: Rock Shox debuted their 1999 models just in time for our August 1998 issue. They showed off their increased-travel 100mm Rock Shox Judy (left) and 80mm-travel Rock Shox Jett (right). The Judy introduced the company’s new Hydra-Coil suspension, with an air chamber, a fluid chamber and a coil spring all working together. 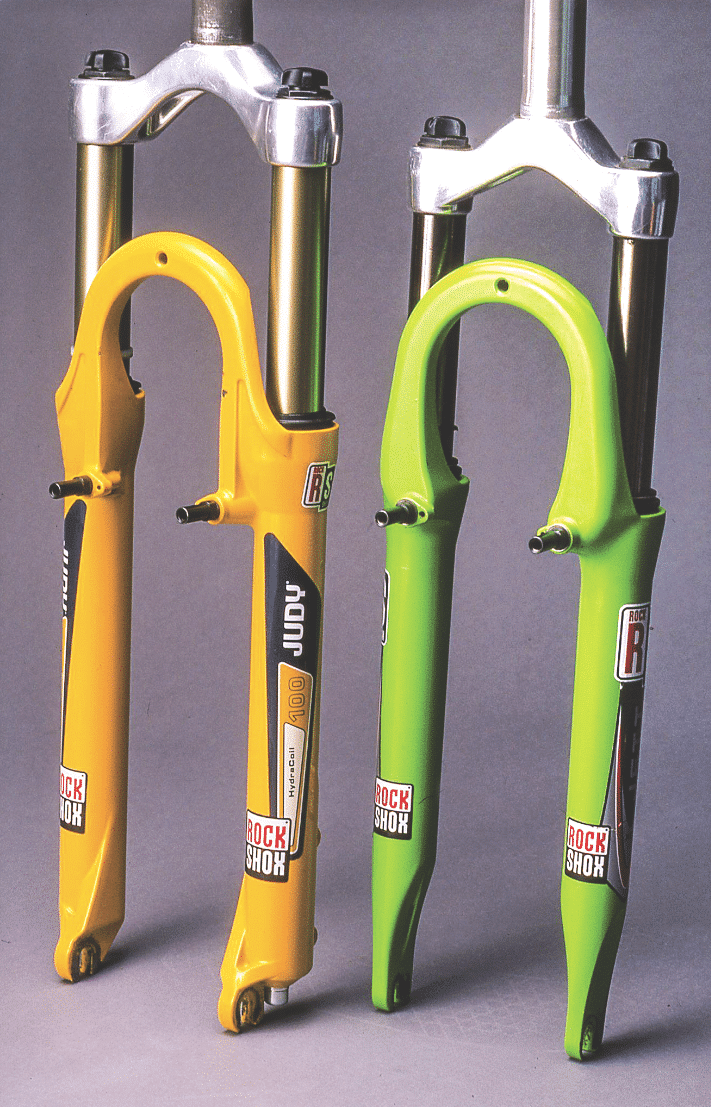 Foes DH Slammer: The rear-shock area on the DH Slammer looks a lot different than the downhill bikes of today. The bike offered a 6-inch-travel Foes fork and 7 inches of travel in the rear. This bike had a 68-degree head angle in the stock geometry, but Brent Foes also offered custom geometry to buyers if someone wanted to order a frame with a steeper or slacker head angle. 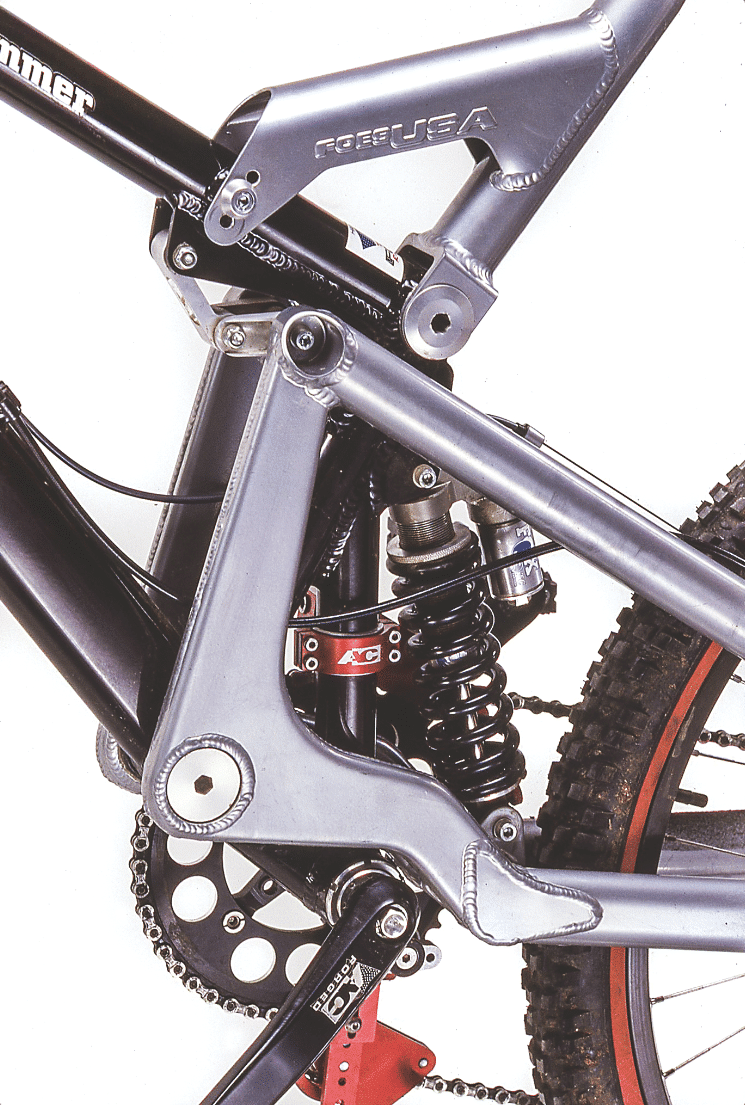 Race-ready: The Palmer Race Edition from Specialized was created to take Shaun Palmer to the top of the downhill podium as frequently as possible. It offered 6 inches of travel in front, 6.2 inches in the rear and a 69-degree head angle. The complete bike weighed 35 pounds. Although not mentioned in the issue, Travis Chipres rode the test bike for the action photos, including the one on the cover. 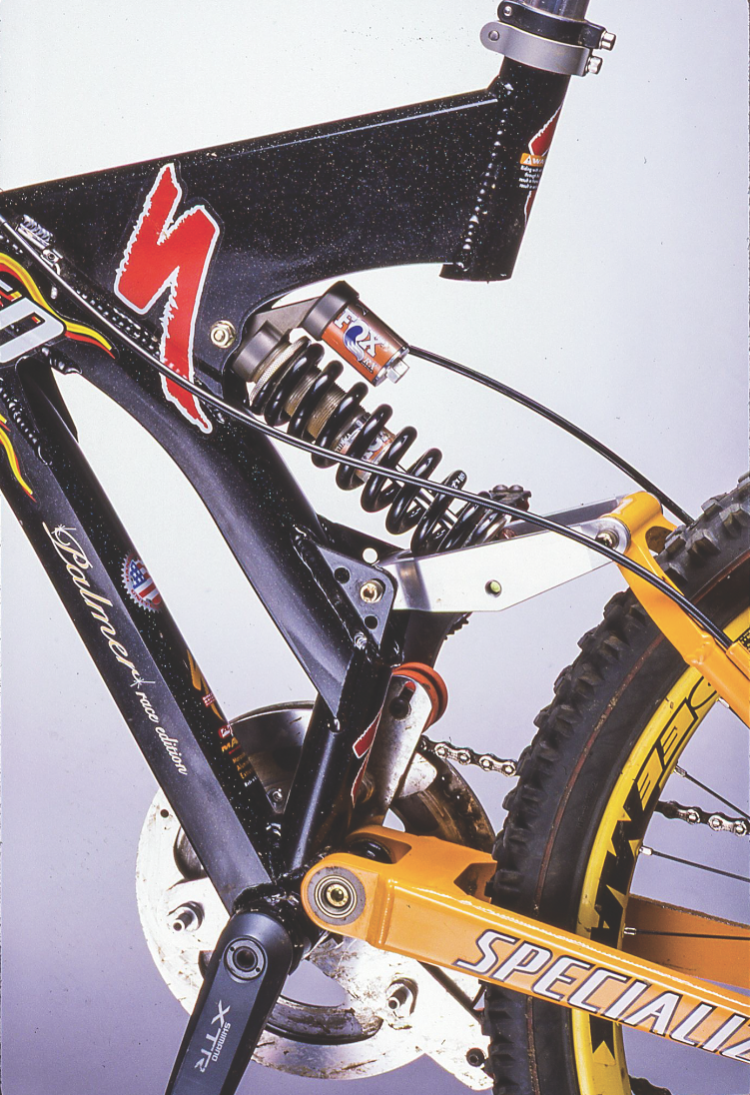 Another legend: The 204 Magnum downhill bike was the newest offering from Tomac Bikes, the now-defunct company that John Tomac and Doug Bradbury started together. The bike offered 204mm of rear-wheel travel (8 inches), which explained the name. An Answer X-Vert Ti fork pumped out 7 inches of front-wheel travel. 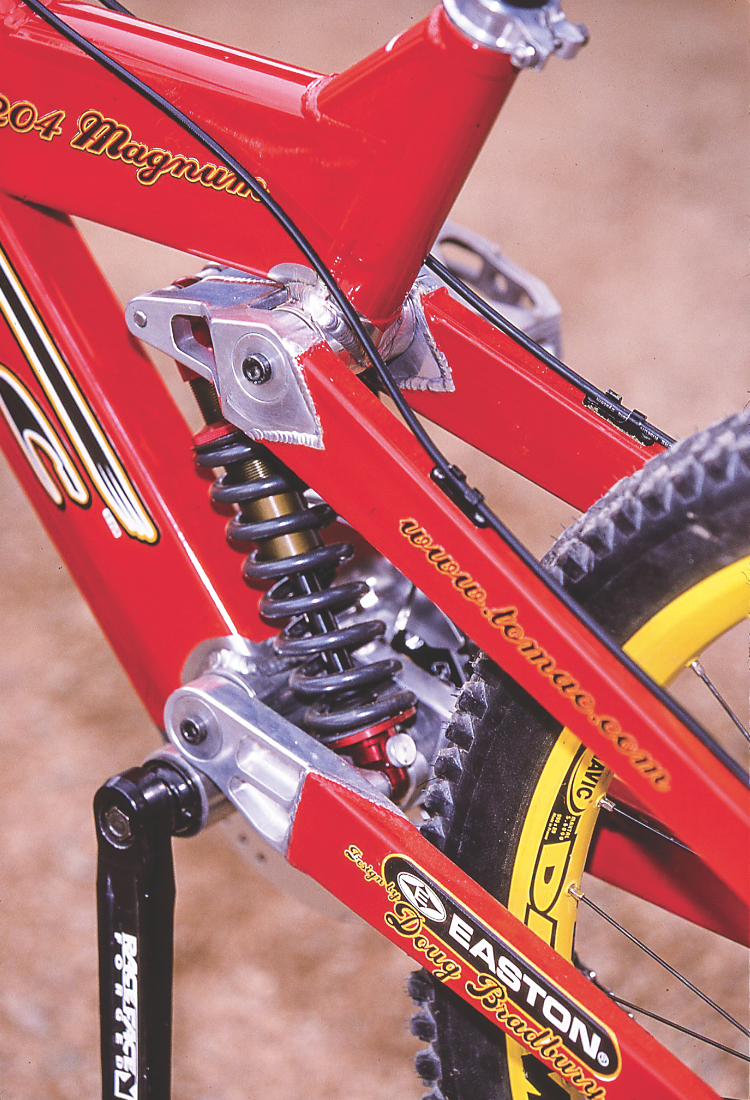