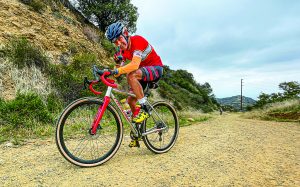 Okay, here’s fair warning: this one might make some of you kids who hang on every letter of trendy mountain bike-speak a bit upset. But, as I’ve admitted previously, this column is akin to my lawn, and being the resident GOMOTP (grumpy old man on the porch), I’m about to get both sentimental about the way it used to be and agitated about the way it is now.

In the old days, there was just mountain biking. And then with the proliferation of racing in the late ’80s, two forms of riding emerged—cross-country and downhill; however, keep in mind that even into the early ’90s, many racers were competing in the downhill on the same bike that they raced cross-country race with. Yeah, back then, bar ends were more commonplace in the chairlift line than disc brakes.

It wasn’t until disc brakes, chainguides and paltry rear suspension started to show up that the very real distinction between a cross-country and downhill bike began to be embraced. In fact, it wasn’t until 1996 that the first double-crown Boxxer fork from RockShox first arrived and would soon replace the downhill version of the XC-originated Judy fork.

Strangely, I even remember a trip to Moab, Utah, around that time with RockShox founder Paul Turner and DH world champ Greg Herbold to test a secret double-crown XC fork. I remember riding the bike, hitting my knee on the stanchions a few times and questioning if all that fork up front was necessary for XC riding. Happily, the fork never made it into production. But, I digress.

AND THEN CAME FREERIDE

I’ll never forget another moment spent with “PT” when sometime in the late ‘90s he told me that instead of attending some upcoming World Cup races, he was heading to South America to do some video shoots on non-race riding. What I didn’t know at the time was that Paul had been inspired by watching some skiing movies over the winter, and that the type of riding he hoped to capture would in later days become better known as “freeriding.”

As an unabashed fan of racing, I was taken aback by his plans. Not go to the races? What else was there? But, with full-suspension designs and disc brakes having finally begun to come of age, the realm of what was possible to ride had suddenly grown far beyond what even any pro-level downhill course could offer.

Of course, leave it to the bike industry to get stupid about the arrival of a new revenue stream and, worse, the vernacular that surrounded it. I mean, it got stupid enough that Cannondale would sue Rocky Mountain over the term “freeride” (giving rise to Rocky’s team of “fro riders”), and other knuckleheads would actually go so far as to get the word “freeride” tattooed on their arms! I wonder if Ned Overend ever thought about getting a tattoo that read “cross-country”?

WHAT’S IN A NAME?

The reason I bring this up is that for the last year or so I’ve witnessed a silly proliferation of new categories of riding. “Enduro,” of course, is the most completely overused term these days, as it’s used not just in terms of the specific type of competition but in enforcing strict product and user categories.

I’ve heard local people say they need to get an “enduro” bike when all they end up using it for is riding the same good ol’ cross-country trails that we’ve been “mountain biking” on for years. Oh wait, did I mean “trail riding” or maybe “down-country” riding?

Just this week I found out there’s an even newer category of riding. This one is called “under-biking,” which I’m told refers to a type of riding performed on bikes that have less than the usual overabundance of creature comforts currently found on many enduro down-country bikes.

But, I’m curious how different that concept is from our back-in-the-day experiences of riding fully rigid bikes sans tubeless tires, dropper posts and electric shifting on the Porcupine Rim trail in Moab or racing the same bikes on the Mammoth Kamikaze. Maybe we should start a new magazine called Under-Bike Action!

People, while I realize there is room for accurate product categorization (a double-crown fork is not the stuff of XC riding), my warning is that we not get carried away with all these hyped-up marketing terms. I mean, really, how different is an “enduro” crank from a “trail” crank or a “down-country” helmet from a “cross-country helmet”?

We all need to be free from the constraints that come with market-induced thinking. Don’t get hung up on the terminology. Build your bike with whatever parts you want. Ride whatever bike you want in whatever environment you want. There is no right or wrong bike to ride, nor is there any right or wrong way to ride. Just ride!

BEHIND THE SCENES WITH OLYMPIC GOLD MEDALIST JOLANDA NEFF

BEHIND THE SCENES: “RED BULL MINE LINE” WITH THOMAS GENON