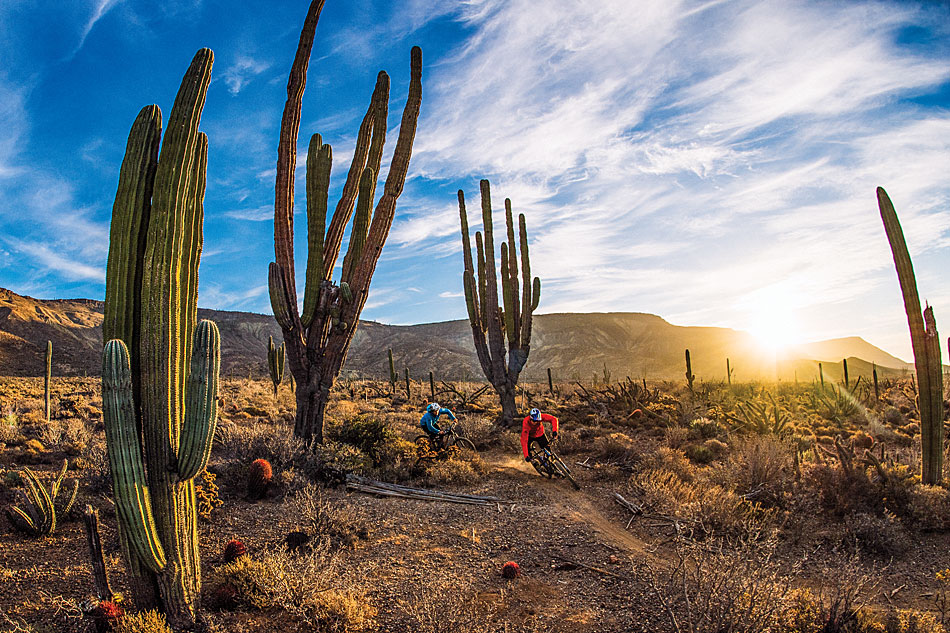 It’s been nearly two years since I stumbled upon an old, decommissioned school bus that I knew would eventually take me on some dream road trips over the next couple of years. When purchasing the bus, I had some big goals in mind, with the first being a road trip north from California to Alaska, and the second being an adventure south down the entire Baja Peninsula in Mexico. It’s a great feeling sitting here writing this, knowing that after some hard work and motivation, those dreams have turned into a reality.

Although Alaska was one of the best road trips of my life, I knew I was missing one thing that could make the next adventure even better. Every solid road trip needs a good wingman, so I reached out to my old pal Martin Soderstrom to see if it was something he would be interested in joining me for. Martin and I met near the beginning of our riding careers over 10 years ago at a jump contest in England and have crossed paths many times over the years. Whether it was an epic road trip or a contest, Martin has always been someone I looked up to as

a rider, so it was an easy decision to invite him along for the next adventure. After a quick talk and locking down some dates, he was happy to join in for the Baja journey, and I was more than stoked to have him along. 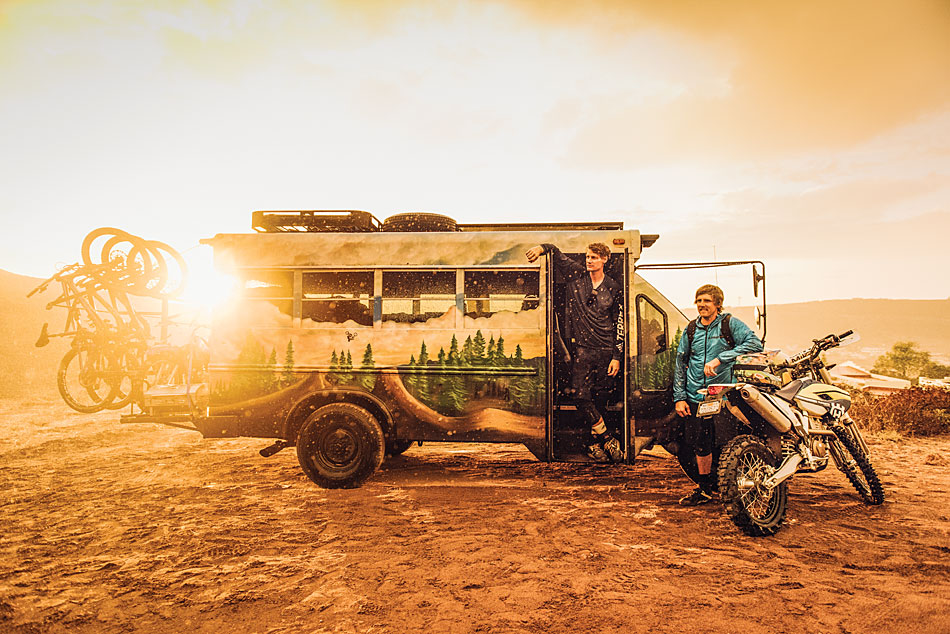 Now that I had a solid road-trip buddy on board and the destination picked out, it was time to dig into the research part and find out what kind of riding Baja actually had to offer. Over the years I had seen some videos and photos from other riders traveling down into the area, but I wasn’t really sure what the desert terrain actually had to offer. Luckily, we are living in a day and age when we can use one of many social media apps to connect with riders and trails from all parts of the world in min- utes. After some research and a handful of messages, I had a solid route planned with some locals who seemed more than stoked to show us around. It was time to pull off yet another epic road trip in the bus. 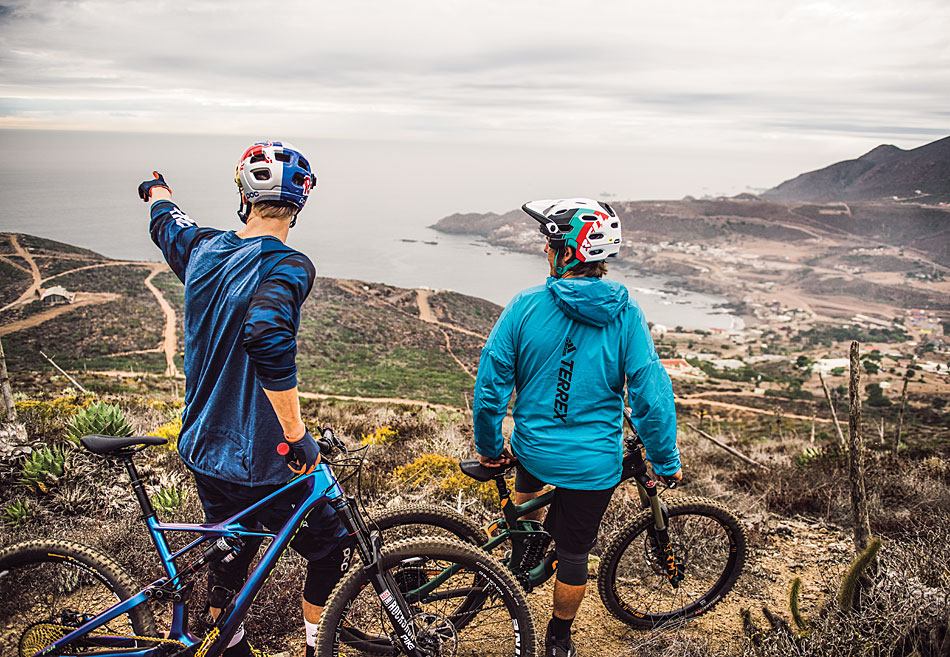 For those of you reading this who don’t know much about Baja, it’s a peninsula that starts just below San Diego, California,  in the border town of Tijuana, Mexico, with a narrow two-lane highway that stretches nearly 1000 miles south, ending in Cabo San Lucas where the Pacific Ocean meets the Sea of Cortez. The terrain is mostly made up of sparsely populated desert towns with a handful of large cities along the way. With it being mostly desolate terrain, actual trails are few and far between, but what I did find looked very promising. It’s always great to have somewhat of a loose plan on trips like this. Leaving some of it unknown makes it very intriguing! Now, with a solid game plan in place, it was time to load things up and make my way down south. 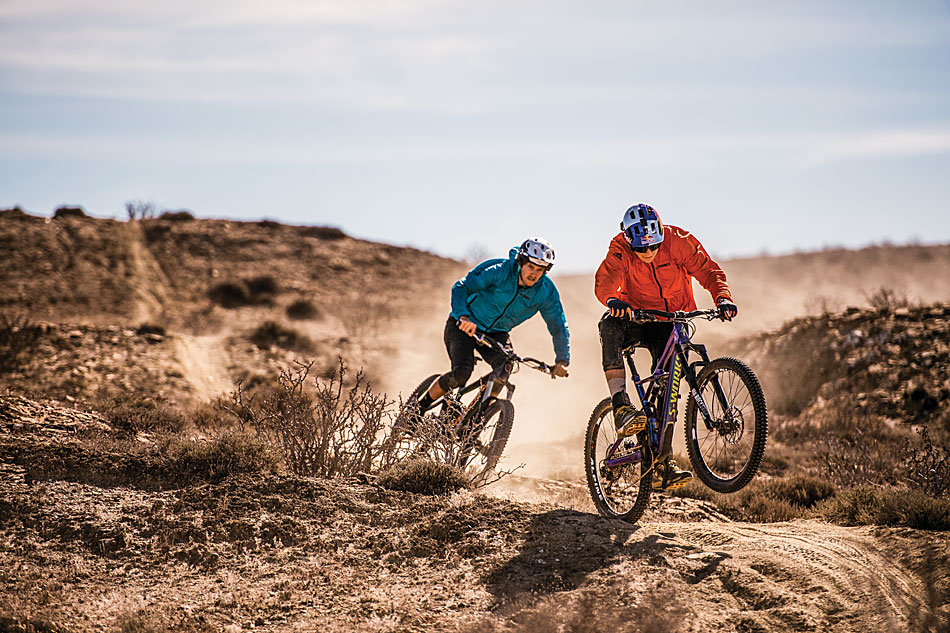 With Martin flying in all the way from Sweden, we made it a bit easier on him and had him fly into San Diego, so that is where our journey down the Baja Peninsula officially started. In San Diego we loaded things up and made our way south towards the border in Tijuana. I’ve traveled to Mexico by plane many times, but this would be my first time crossing the border in a vehicle into Mexico, so I really had no idea what to expect. With Martin and me, a crazy-looking school bus, an RV and a film crew of three, we really didn’t know how the crossing would go. Luckily, after a quick X-ray of both vehicles and some fresh stamps on our passports, it was smooth sailing to our first destination just south of Ensenada. 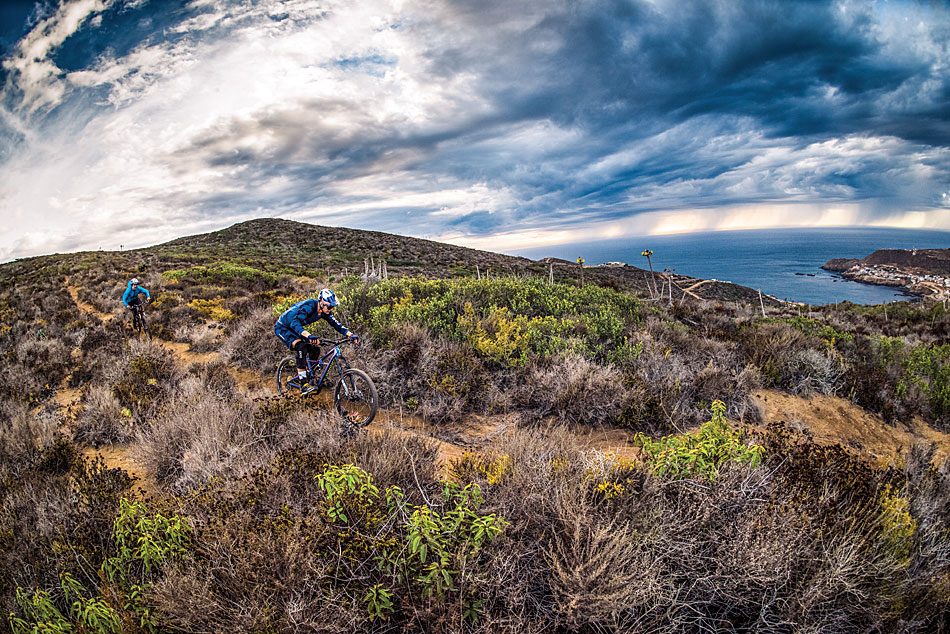 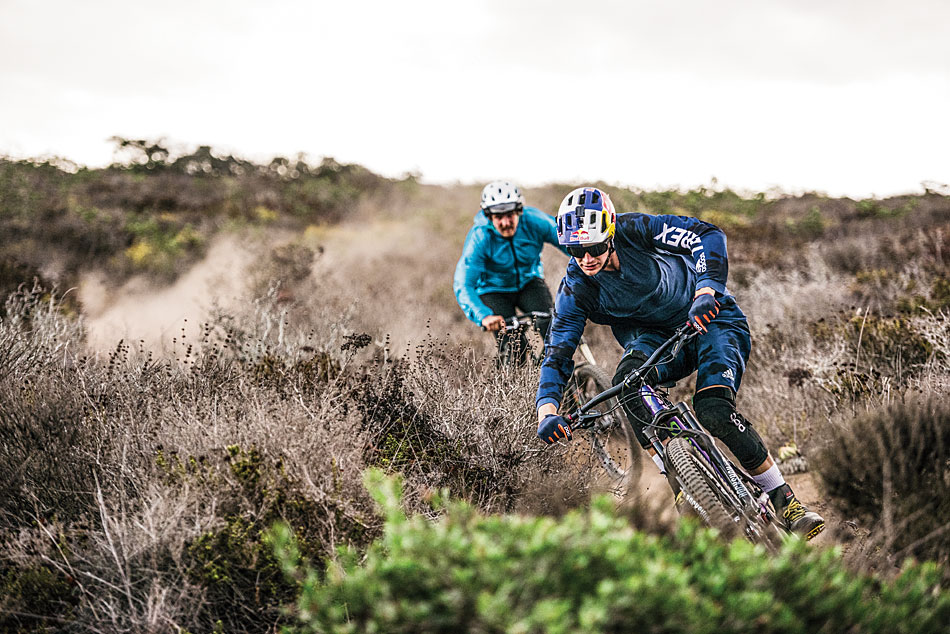 Johnny Peraza was one of the locals I was able to connect with before the trip, so after a quick phone call, he was ready to meet us at his local trails right above the famous La Bufadora marine geyser. This was a place I had previously visited without a bike, and I had no idea there were a ton of mountain bike trails littered throughout the hills above, so it was cool to revisit the area on different terms. With it being November, we knew there might be a slight chance of rain, and, sure enough, the skies opened up on our first day, but just enough to keep the dust down and the trails tacky. After a solid day of riding above the scenic ocean trails, we ended with some tacos and beers in the town of Ensenada. Our morale was high, and we wanted to keep of nowhere of Punta San Carlos called Solo Sports. Once we found the location, we searched around for the perfect spot on the beach. This is what we would call home for the next few days. 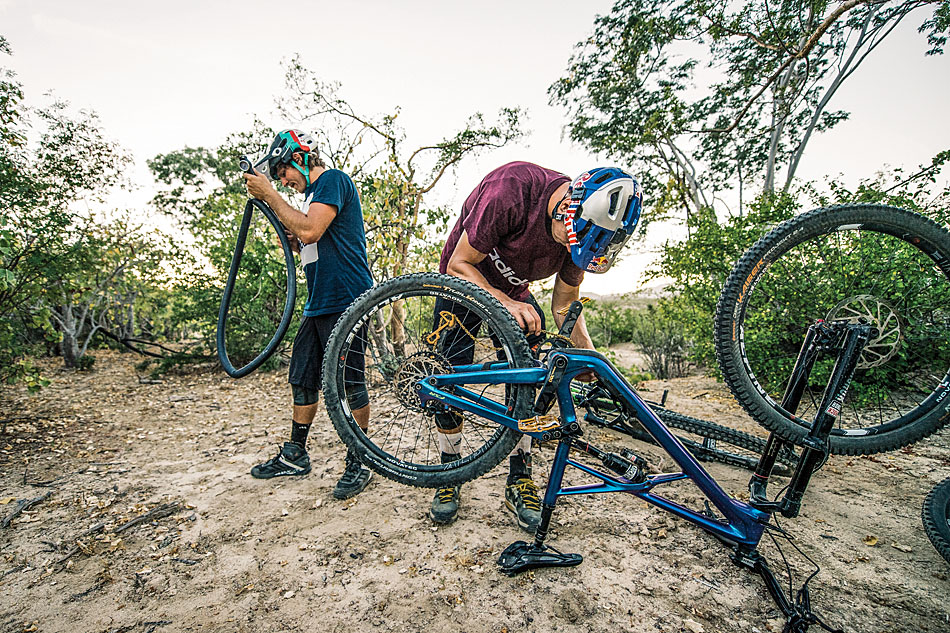 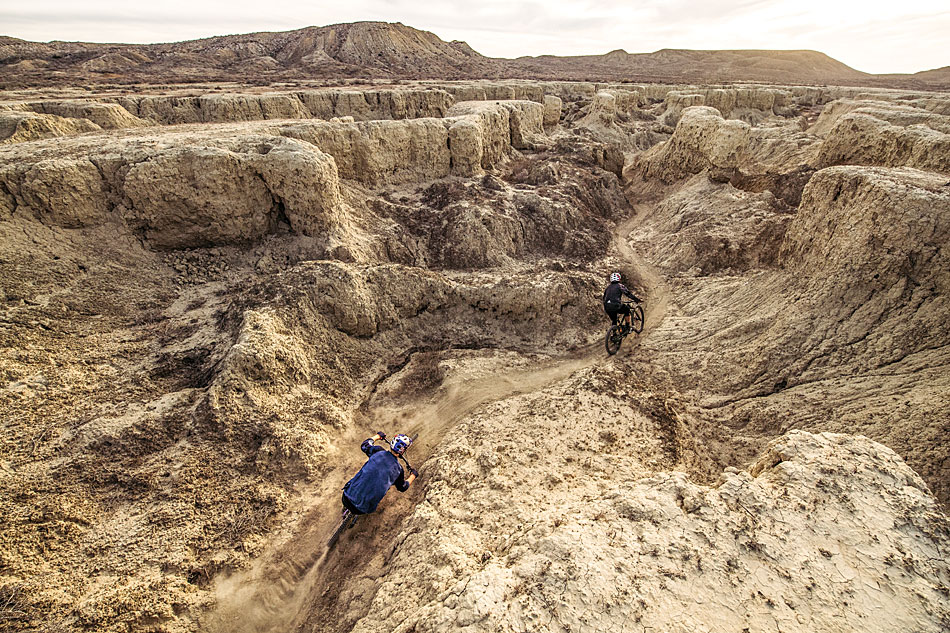 It was one of the coolest feelings of the trip, waking up in the morning and finally being able to see the terrain that we drove into the night before. With it being the off-season for Kevin and Solo Sports, we were one of only a few camps set up throughout the entire area. Being out in the middle of nowhere with no connection to the outside world is something that I strive for at times, and this was definitely that type of place. Luckily, I was able to talk to Kevin for a bit before the trip, and he sent over a map of the mountain bike trails he and his crew built over the years, so it was pretty self-explanatory finding everything. That morning we ripped around on dirt bikes and found all the good trails within a couple of hours. At that point, we knew the next few days would be filled with great trails and some solid camp vibes. 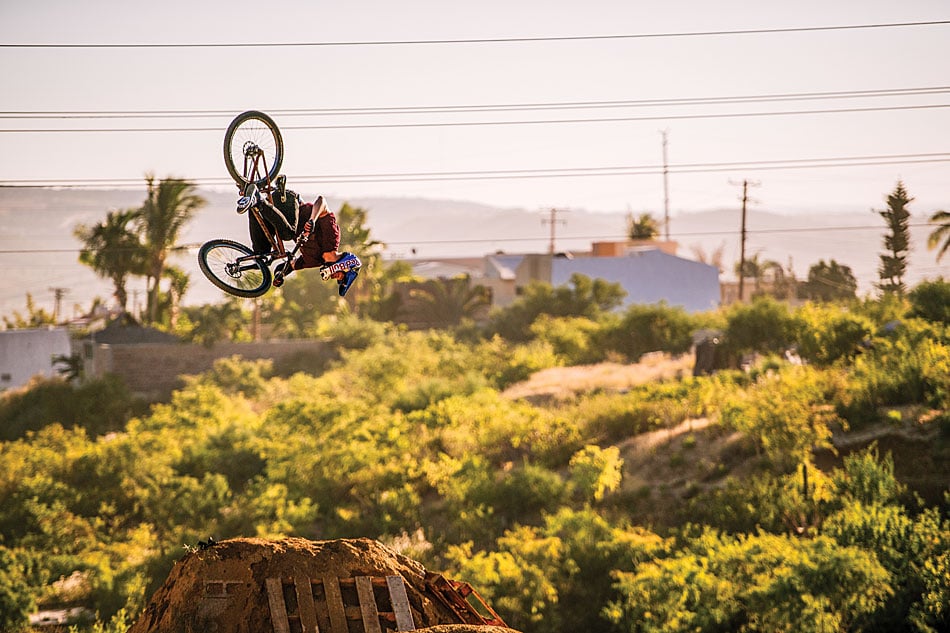 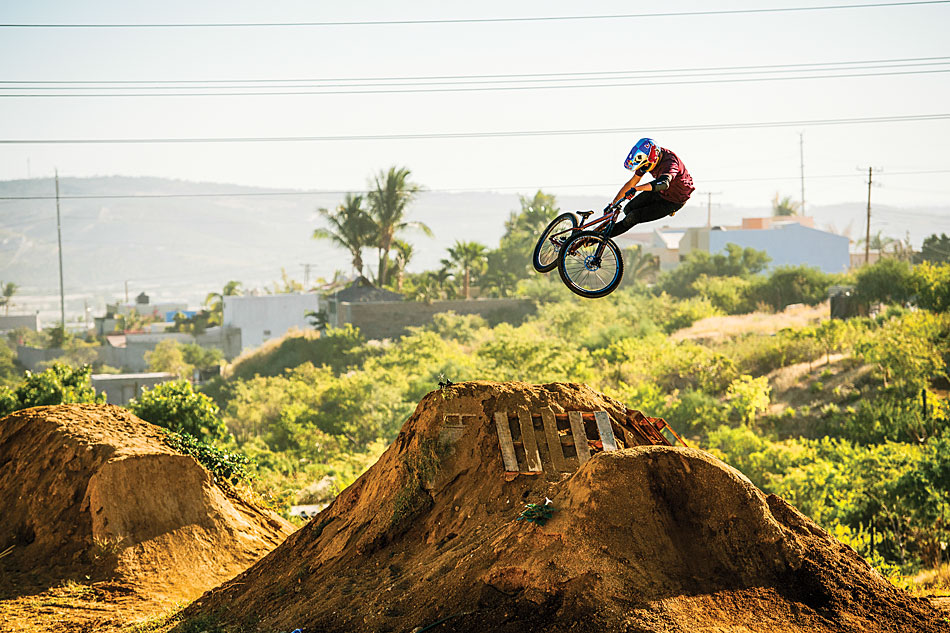 After what would be some of the best riding we found throughout the entire trip in Punta San Carlos, we made our way back out the long dirt road and headed south towards our next destination. As I mentioned earlier, there aren’t a ton of mountain biking destinations in Baja, so we decided to check out a little town called San Ignacio to break up our drive to the next riding destination. San Ignacio is located between Guerro Negro and Santa Rosalia and is a little mission town with a population of less than 600 people. It was a nice, quick stop to get on our jump bikes for a little street ride while seeing some of the culture that makes Baja such a special place. 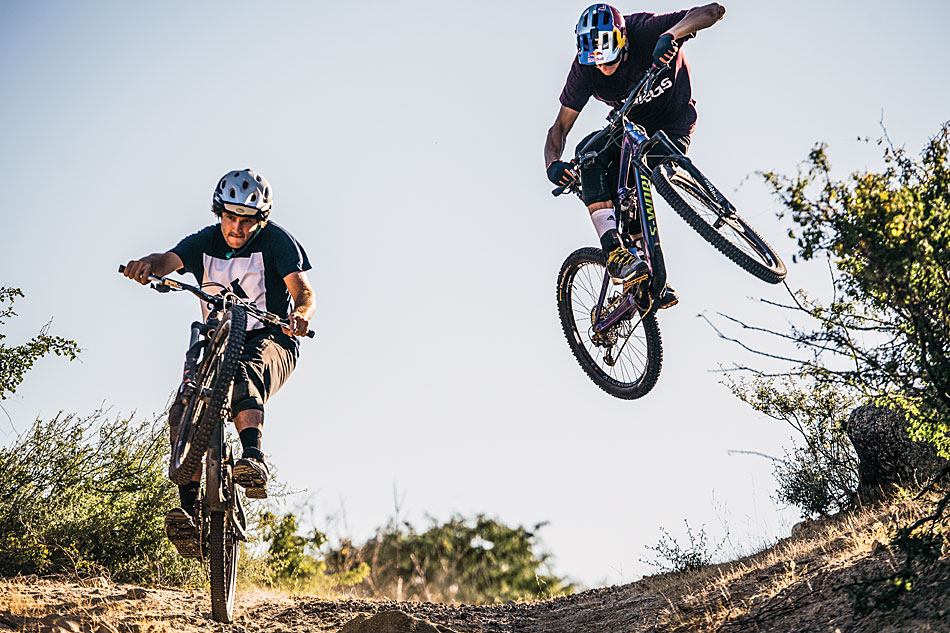 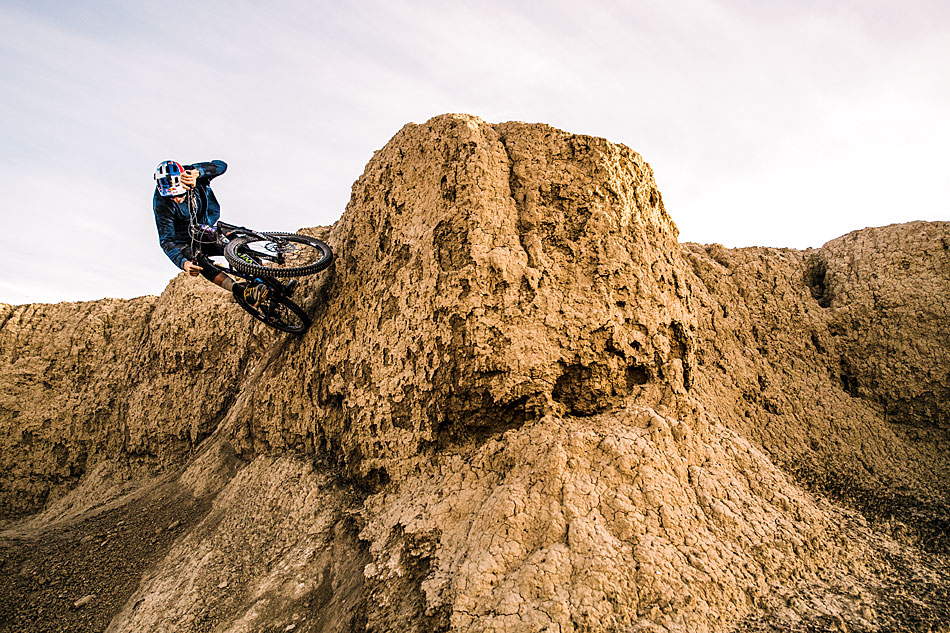 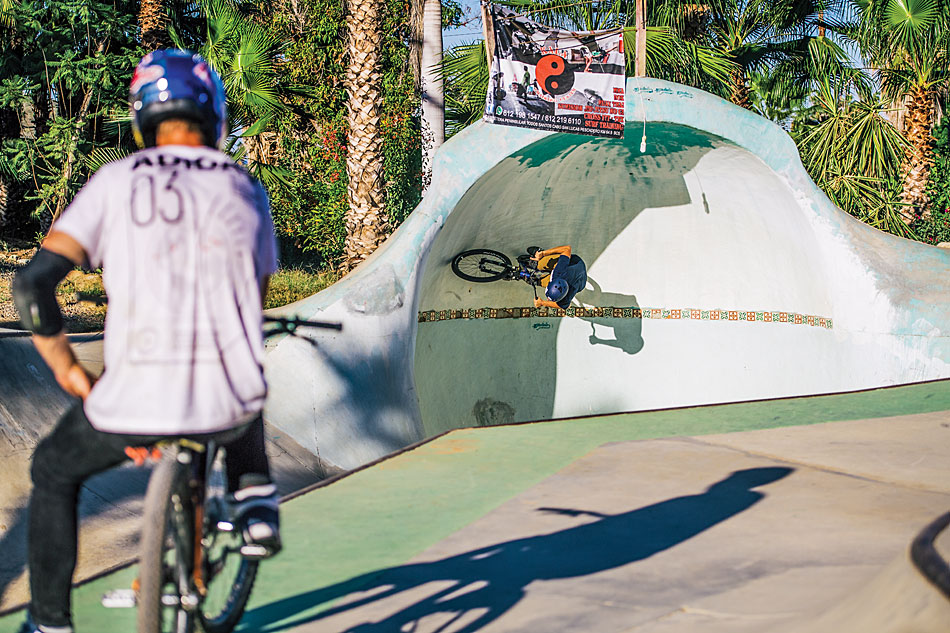 It was super cool seeing the locals, and even the police officers were impressed by Martin’s street skills. I’d say he definitely left his mark in San Ignacio. After a nearly 500-mile drive through the desert, we finally arrived in Los Barriles located on the Sea of Cortez side, where we had a good lead on the trail network above the town. As we arrived in town, we were greeted by a guy by the name of Todd Simmler. Todd is originally from Hood River, Oregon, but spends his winters building trails and guiding mountain bikers in the area. He was more than stoked to show us the lay of the land and the many trails he helped build over the years. After a solid afternoon chasing Todd through the trails, we were set for the next couple of days exploring the area on our own. After a few days of fun on the trails that ranged all the way from beginner to expert, I’d definitely recommend checking it out if you find yourself in the area. 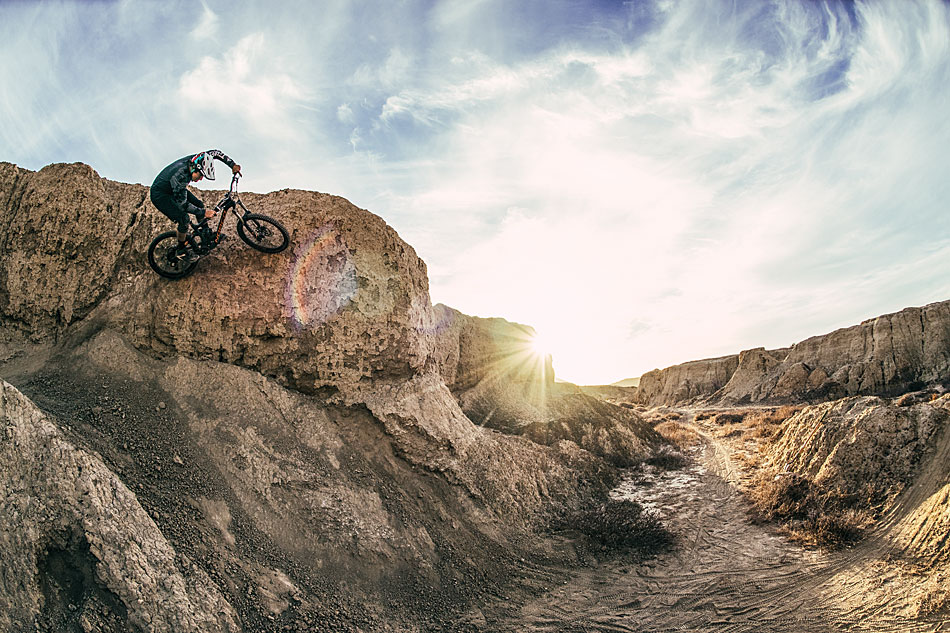 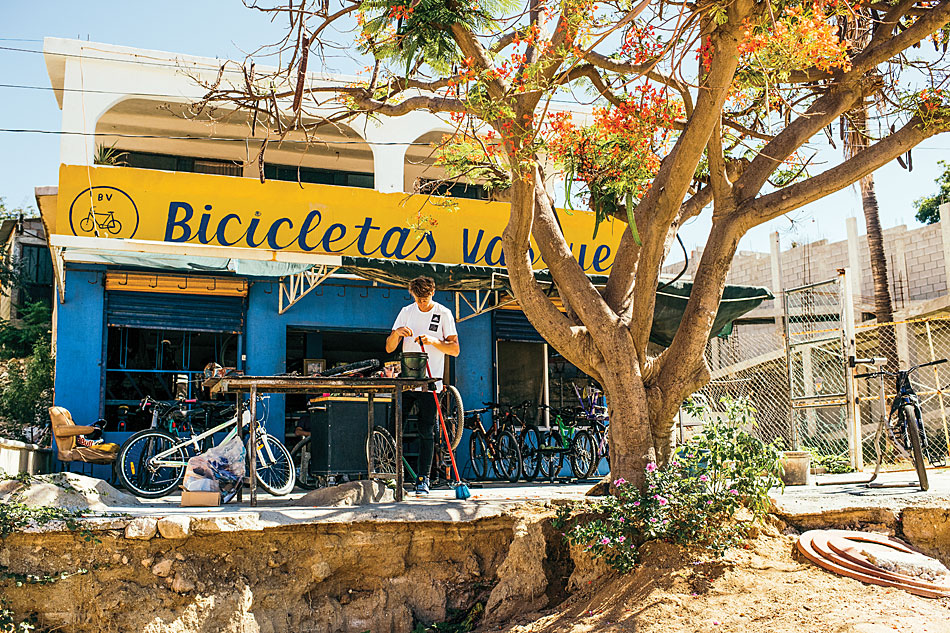 From Los Barriles we made our way back across the Baja Peninsula to the Pacific side to a town call El Pescadero. This little town, located just south of Todos Santos, holds one of the best, if not the best, skate parks in all of Mexico. Word has it an NFL player helped fund the park because of his ties with a local skateboarder. Nonetheless, we felt like we had found the jackpot rolling up on this place. Martin and I both come from jumping backgrounds, so it’s always fun when we have the chance to break out the hardtails. As we entered the park, we were greeted by

a few of the local skateboarders who were super pumped to have a couple of fresh faces at the park, even if they were mountain bikers. After a few hours of non-stop runs through the park, the heat from the sun forced us to pack things up and head to the beach to get into the water. 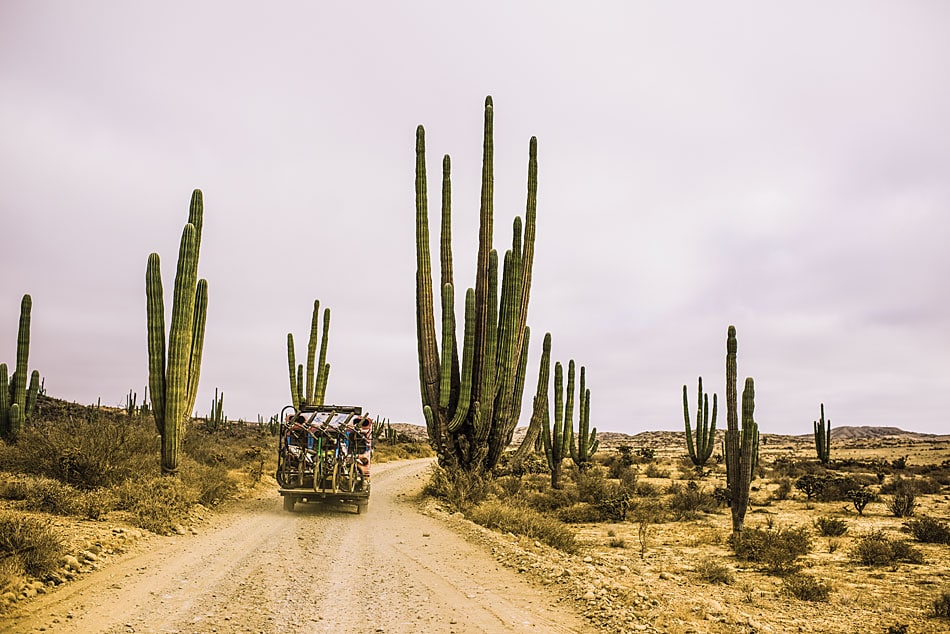 With the rest of the afternoon spent surfing and chilling out on the beach, it was time to make our way an hour south towards the Los Cabos area. This would be our final destination. We left ourselves a few days for this area, since we had heard about some epic downhill trails above the city of Cabo San Lucas and some killer dirt jumps nestled into a neighborhood in San Jose Del Cabo. Both locations exceeded our expectations and made for some epic final days exploring the riding Baja has to offer for mountain bikers like us. 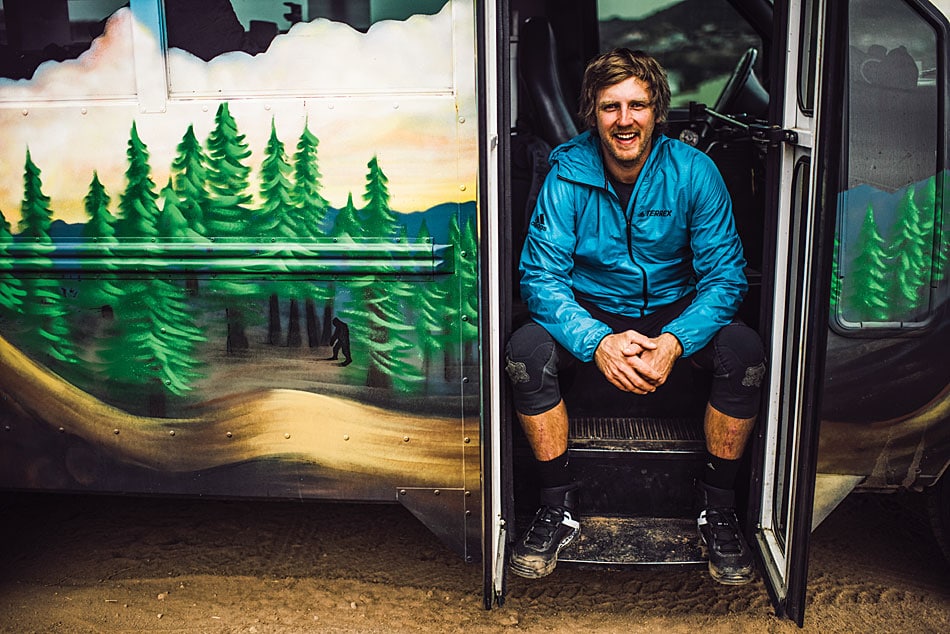 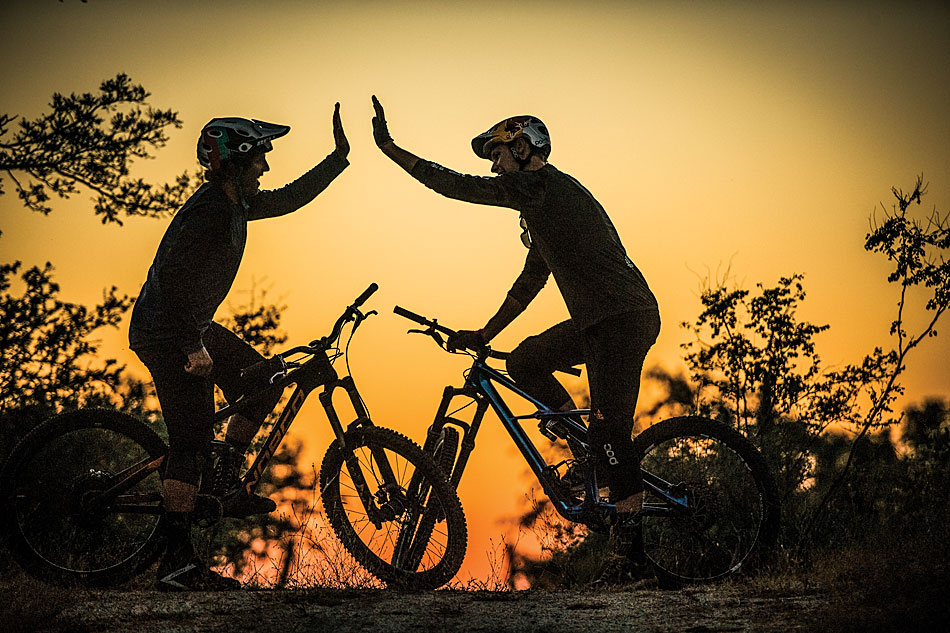 There is always the unknown when planning trips like this, and especially when you are traveling to a foreign county, but overall I would say that Baja definitely delivered good times and some epic riding locations along the way. A lot of people tend to think of Mexico as a scary or dangerous place to travel, but after adventuring over 2000 miles to the tip and back, I would argue otherwise. If you have the means to explore it, I wouldn’t let other people’s opinions stop you. We met some of the nicest, most generous people along our trip and made it out with zero problems. Thanks for the good times, Mexico, and I’ll be back soon!