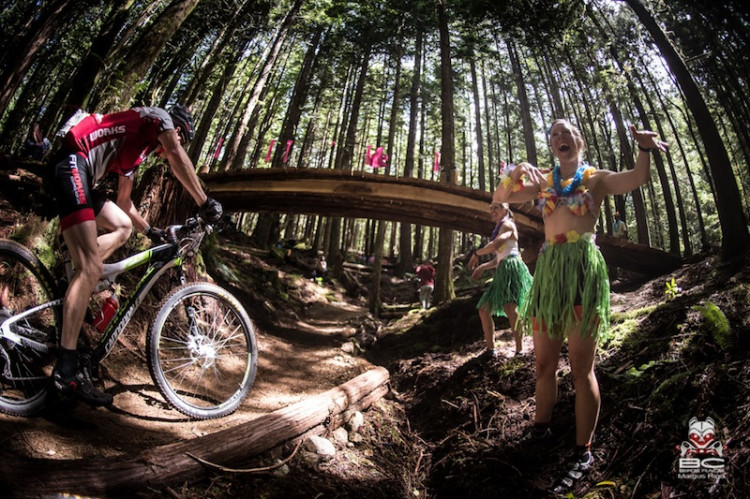 For Canada Day the third stage of the BC Bike Race presented by Lululemon Athletica eased into the isolated town of Powell River on the Sunshine Coast. A short walk with the sunset as a backdrop and a village of people cheering for their arrival was the riders first introduction to this outpost of Canadian hospitality. Though it’s not an island surrounded by water, the geographical boundaries and some of the worlds deepest fjords make this small community accessible only by ferry. The result is a backyard that that may as well extend to the edges of the universe. Deep forests with an extensive and still growing network of trails, positions Powell River to be a BCBR stop that can evolve with the race. 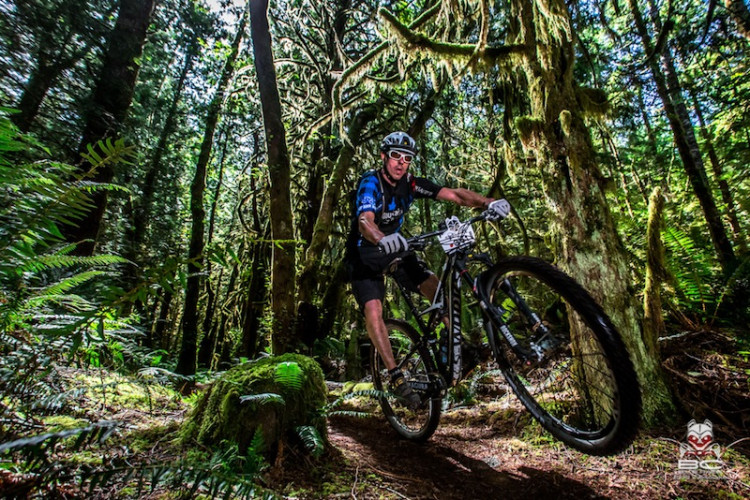 The stage was flatter but the trails were loamy and technical. Not as many rocks but the roots challenged any angle you placed the bike. It was a physical course that requested that you keep pedaling out of the saddle when in the woods. The descents down trails like the enduro stage Death Rattle had organic berms and pockets to use for traction or ejection buttons. The flow in all the trails required all your balanced bike stances. Let the bike move away from you, drop in and load a corner, explode out as your rear wheel slides off a wet root. Repeat.
After two days of courses that were new, the Powell River course stayed pretty much the same from the previous year according to the map. If you had a refined eye you would have noticed a new piece of singletrack on the map that cut in half a commonly disliked eroded road climb on your way to the day’s enduro. The new trail named Aloha was a climb that mixed technical and flow features that eventually crossed a new bridge that required an enormous amount of labor from the Powell River Cycling Club to construct. The new bridge became a cheer zone with a makeshift Tiki Bar tended by grass skirt wearing hosts from the community. 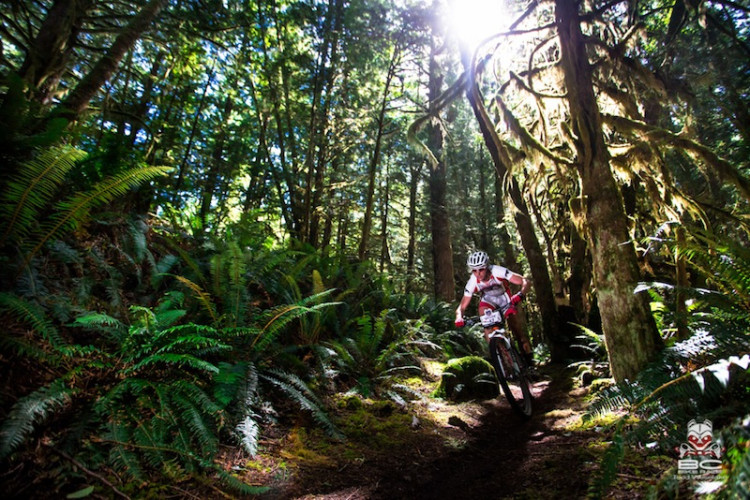 It’s probably safe to say that most people entering the BCBR are used to friends and family who don’t participate in their rituals, and they regularly have to explain why they do something that often leaves them bloody but grinning. Coming to the BCBR is the gathering of normally isolated pockets of people into one place for a celebration of what they love. So it must of struck a pleasant discord in their sense of self identity to step off the BC Ferries into the small town of Powell River and have the streets lined with people who don’t necessarily ride ringing bells, playing bag pipes, and a drum circle beating a steady rhythm guiding their steps towards base camp at the waters edge of beautiful Willingdon beach park. 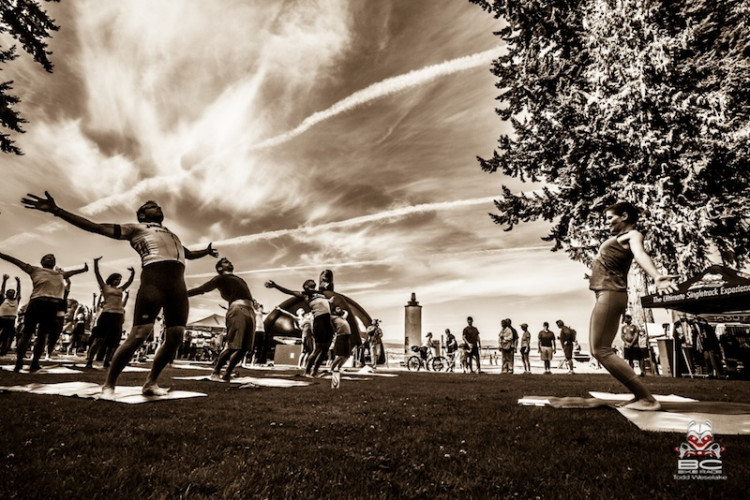 It seems that most small town quaintness has gone the way of the home phone. We expect larger cities to be numb to events and have a lack of engagement due to diversity of interest but even the modern rural communities often lose the bonds they once formed through group activities and gatherings. Powell River is an isolated community that still has strong ties left from it’s days as a world leader in paper production. Never a huge population due to the difficulty of access, the economy of Powell River has seen a steady decline as the world market reduced the area’s paper making machines from a high of 12 down to three. Though the mills have been downsizing, the mountain bike trail production is on the rise. Like many areas of British Columbia, ecotourism is the new economy and a community like Powell River has an intimate understanding of a livelihood that is dependent on the land that surrounds them. 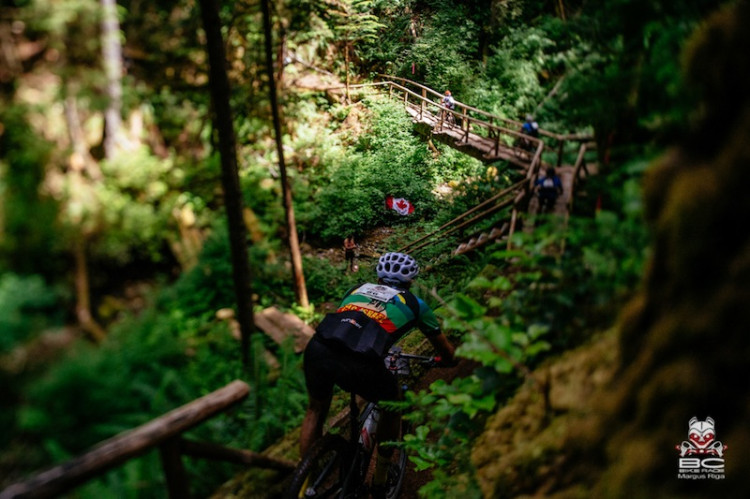 The combination of a growing network of trails rich with singletrack, a beachside campsite, water that you can swim in, and a community that supports the event is a key reason the BCBR continues to return to this Sunshine Coast Destination. It’s also why this year the race was organized to spend two nights on the water relaxing before the next four days of racing towards Whistler.

The Race:
The Women:
Lea Davison (Specialized Bikes) and Wendy Simms (Kona Racing) continued to exchange stage victories with Davison finally dropping Simms on the gravel and singletrack climbs coming out of aid station 2. It was a tenuous lead with only 39 seconds at the finish. 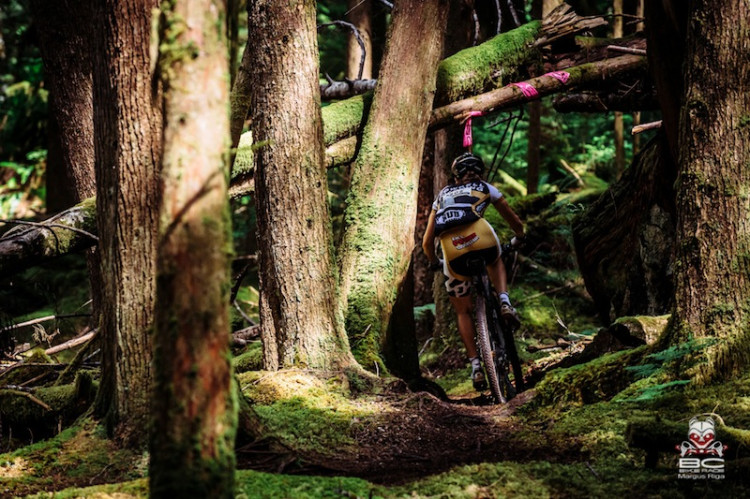 “It was back and forth a lot today. I started in the lead then Wendy and Sonya and caught me on the road section. Once we hit the singletrack Wendy and I put some distance on Sonya. I just hung on for the ride. Wendy is giving me a singletrack clinic. She is so fast and so good. Eventually I was able to drop her in the singletrack climbs after aid station 2.” Davison
“I had so much fun. Today was different because it was flat single track and Wendy was motoring. I was thinking this is the fastest I’ve ever gone in singletrack.”
After a tough stage yesterday that put Sonya Looney (Topeak Ergon) in a rare funk she returned to stage three looking for retribution. She escaped mechanicals and rode strong to the finish securing a third place for the second time out of three stages.
Wendy Simms now has a 1:55 lead over Davison while Looney and Kim Hurst are within a minute of each other for third. 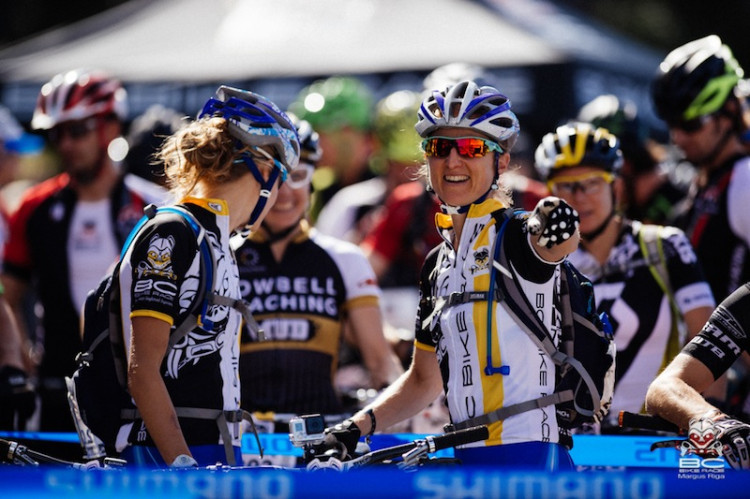 The Men:
Three different men have made of the top of the podium in as many days. Race veteran Jason Sager (BackCountry Bikes) used his knowledge of the stage from previous years to plan an attack plan. When Spencer Paxson (Kona Racing) made an early break Sager went with the move and the two of them escaped together all the way to the bottom of the Enduro section. He managed to drop Paxson not to long after.
“I took the lead on one of the false flat bumpy sections and started to pedal just a little bit harder. Seeing if I could force an mistake. He just came of my wheel.” 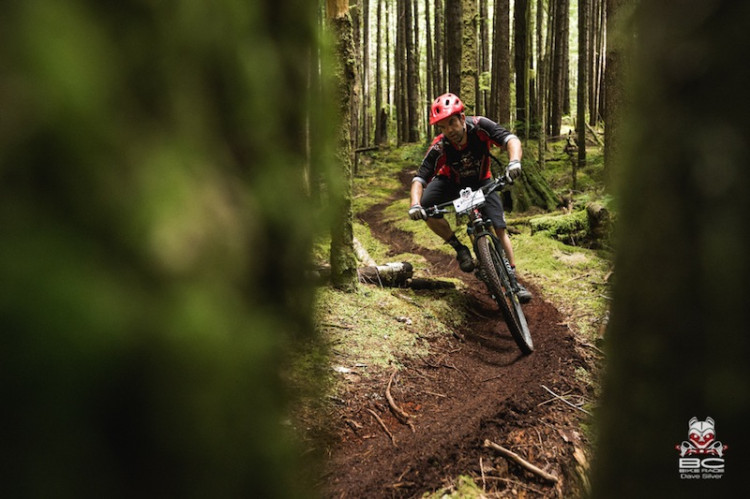 With the Kona crew leading a group of ten Sager didn’t worry about getting chased down. It was up to teammates Kris Sneddon and Barry Wicks to put time into their other main challenger Tristan Uhl (787 racing)
Currently Kona is nesting on the top three podium spots for the overall. Sneddon, Wicks, and Paxson with 32 seconds separating Wicks and Paxson and another 1:53 back.

Photo of the Day: Out of Africa

The August Issue Has Hit The Streets