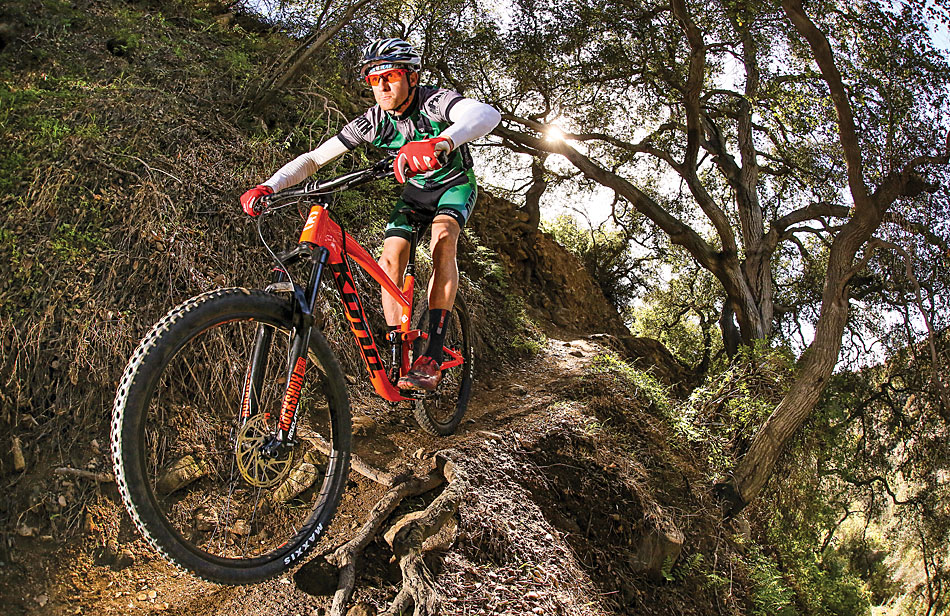 Kona’s original long-travel 29er, the Satori, was put on the sidelines after 2014 when Kona replaced it with the Process 111. Going into the 2019 model year, the Satori returns and recaptures its spot in Kona’s lineup. The mid-travel 29er builds off the same travel numbers as the previous Satori, but receives an all-new suspension platform, updated geometry and design inspiration from Kona’s Process, Hei Hei and Hei Hei Trail. The all- new Satori is built to take on any singletrack and does so with a modest price tag. For those reasons, we invited Kona’s newest trail machine into our test fleet this month to see how it would fare on our local singletrack.

The Satori is a 29er trail bike built to handle all parts of the mountain. It’s not afraid to climb, nor is it scared of a gnarly descent. The Satori doesn’t boast overly aggressive numbers, but don’t let that lead you to believe this bike can’t take on chunky singletrack. In fact, Kona designed and tested the Satori on the best trails the Pacific Northwest has to offer. The Satori DL is Kona’s top-level build with a price of $3500. An entry-level model can be had for $2700. 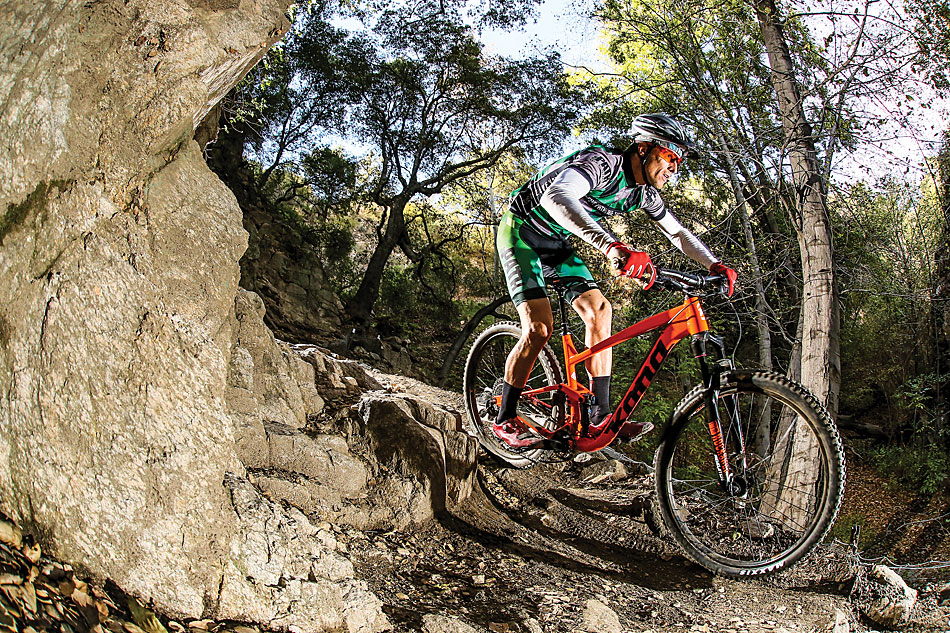 Kona took what it learned developing the new Process and Hei Hei lines and incorporated the best attributes into the Satori DL. The Satori features Kona’s Fuse suspension with 130mm of travel, a longer reach, a shorter stem and a new trunnion-mounted shock. The frame is constructed from 6061 aluminum and has external cable routing for easy maintenance. The Satori is compatible with stealth-routed dropper posts. The bike was designed with a 68-degree head tube angle and 16.9-inch chainstays to provide sporty handling. Kona uses a steep 78.3-degree seat tube angle that places the rider in a more centered position over the bike. And last, the Satori features Boost hub spacing, a press-fit bottom bracket and a lifetime warranty from Kona. 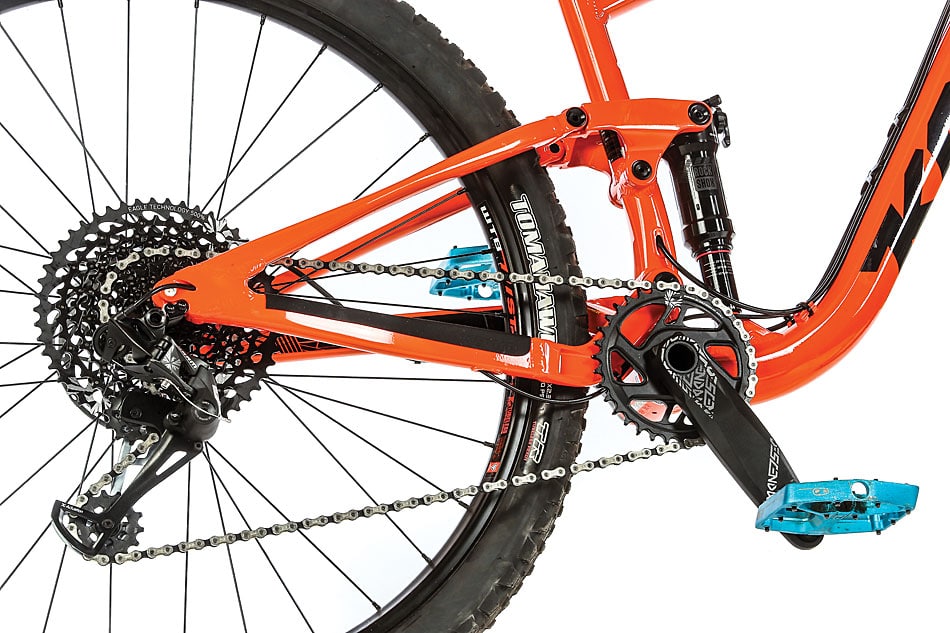 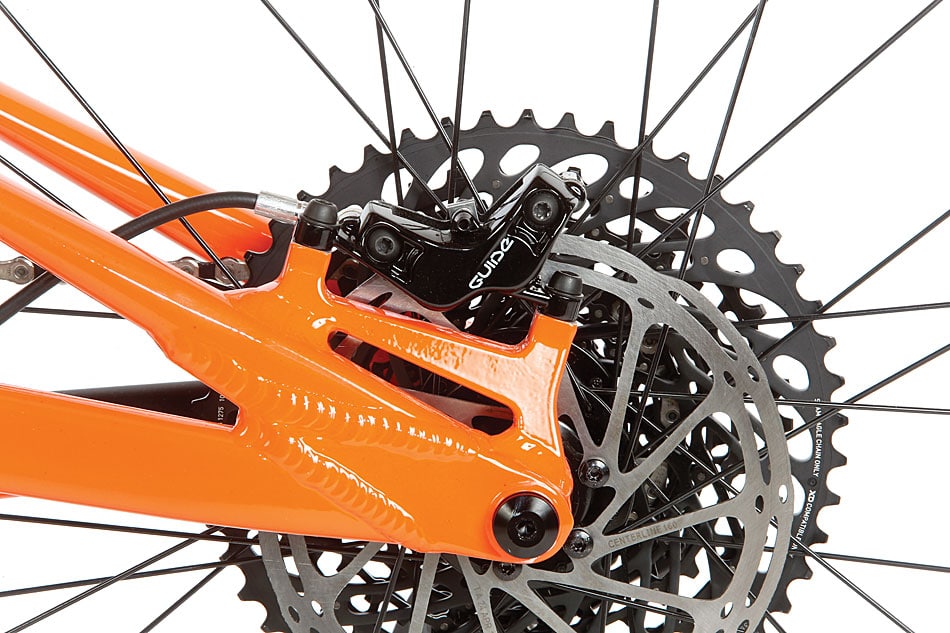 The Satori is packed with value-driven parts that provide great performance out on the trails. The first thing that caught our attention was the SRAM GX Eagle drivetrain, which gave our test riders a wide-ratio, 12-speed cassette and a 34-tooth chainring. Kona worked closely with RockShox to develop a custom-tuned Deluxe RL shock that would pair well with the Fuse Independent suspension. Up front, Kona spec’d RockShox’s new Revelation fork with 140mm of travel and added a Reverb Stealth for good measure. Kona then wrapped 2.3-inch-wide Maxxis tires around WTB STP i29 wheels. 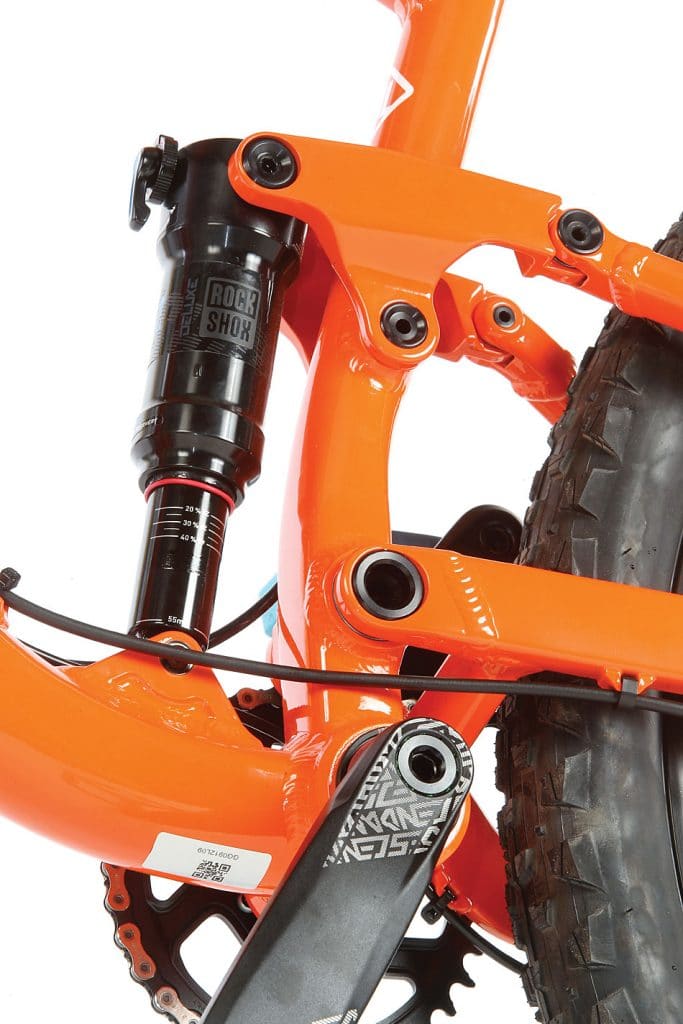 Setting sag: The Satori features mid-level suspension components, which beginners will find easy to set up. Meanwhile, more advanced riders will have enough adjustments to dial in the perfect feel. We set up our test bike with 25-percent sag in the rear and 20 percent up front. Next, we adjusted our rebound accordingly and left our shock and fork in the open positions. In fact, throughout our testing, we never felt the urge to lock out our suspension. 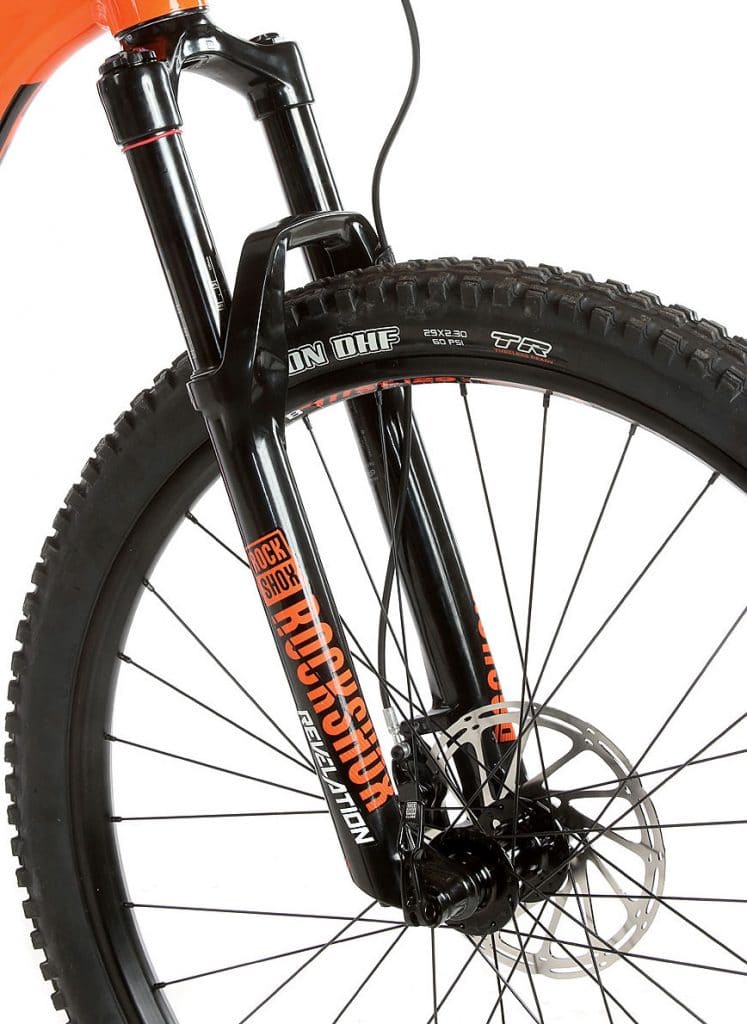 Moving out: Kona brought the Satori into the modern era with a longer top tube, shorter stem and compact chainstays. Kona then made a drastic change to the seat tube angle, making it steeper to evenly center riders over the bike and to give riders a more comfortable reach. Sitting on the bike has a natural feel. The Satori has ample standover clearance and a 150mm dropper that easily gets the saddle out of the way during descents. 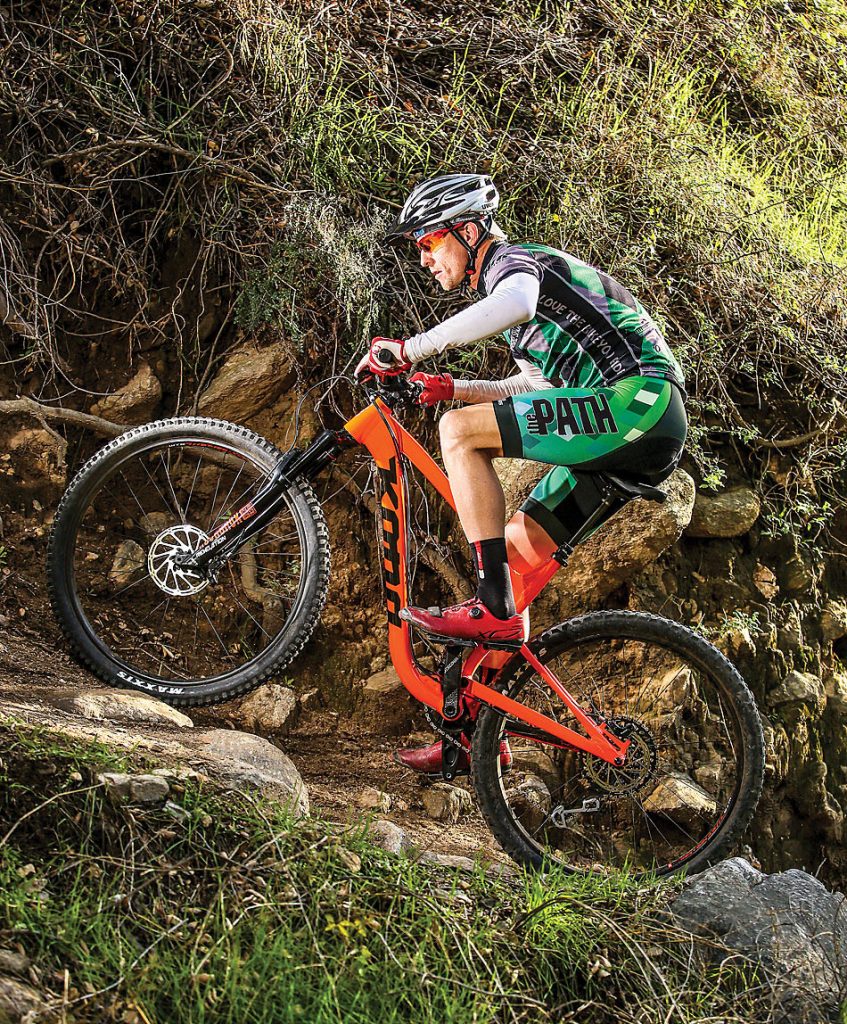 Climbing: The all-new Satori builds off the same Fuse suspension platform as Kona’s Hei Hei cross-country/trail machines. The Fuse suspension is designed around a single pivot that relies on small degrees of frame flex near the rear hub as opposed to having a pivot. This makes for a bike that’s an efficient climber, whether you’re pushing hard in or out of the saddle. The Satori’s 68-degree head tube angle made slow-speed maneuvers easy to pull off, and our Eagle drivetrain made it possible to spin our way up steep climbs. The Satori, however, has one more trick up its sleeve—its 78.3-degree seat tube angle. Kona drastically pushed the seat tube angle forward to greatly enhance climbing performance. 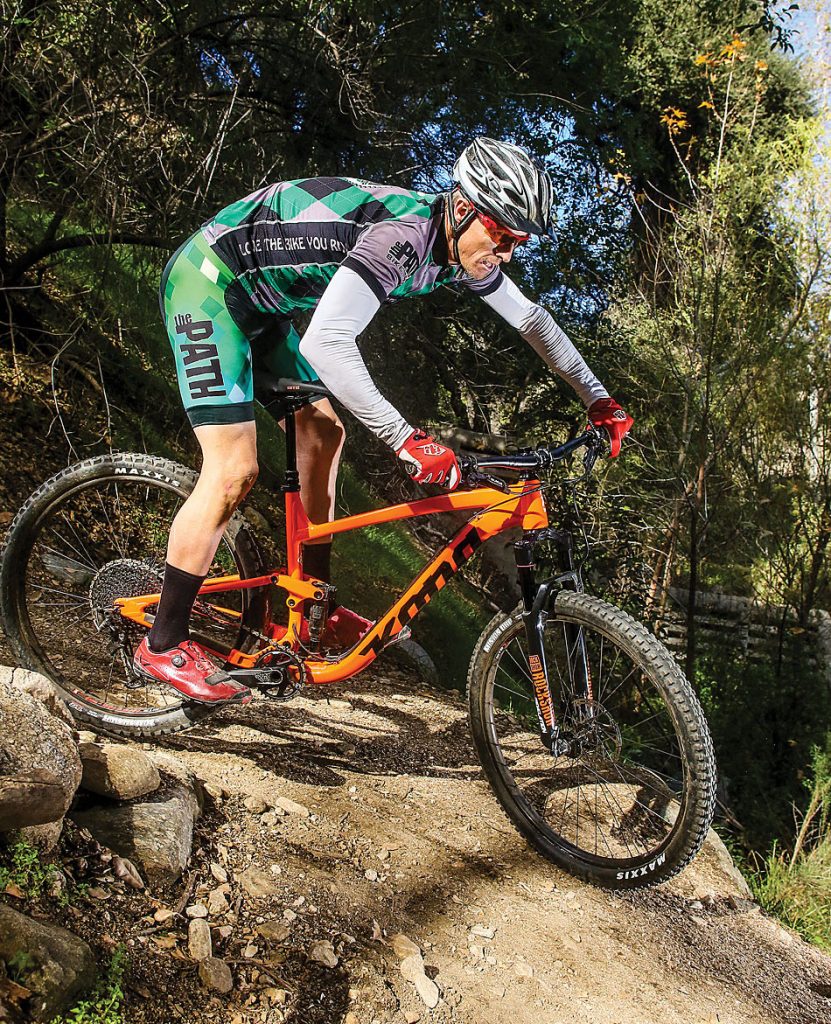 Cornering: Kona built the Satori with a sporty feel that rips around the trails like a Porsche on an open highway. The Satori’s snappy handling can be attributed to its super-short chainstays that tuck the rear wheel in close and its compact cockpit that provides great control. The 2.3-inch-wide tires on 29mm internal rims have a nice profile that inspires confidence when digging the side knobs into the ground. The Satori likes to slide its way around turns but does so in an easy-to-control manner. 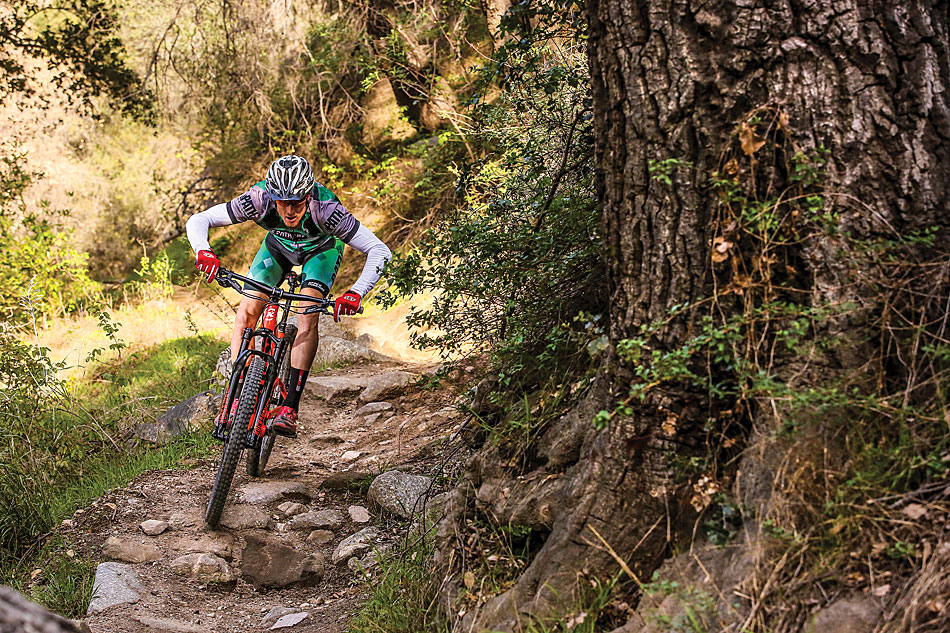 Descending: The Satori is a well-rounded 29er designed to handle any part of the trail. The Satori’s 29-inch wheels plow right over the top of whatever is in its way, and its RockShox suspension offers a plush ride. Kona is known for making shred-worthy bikes, and the Satori fits the bill. 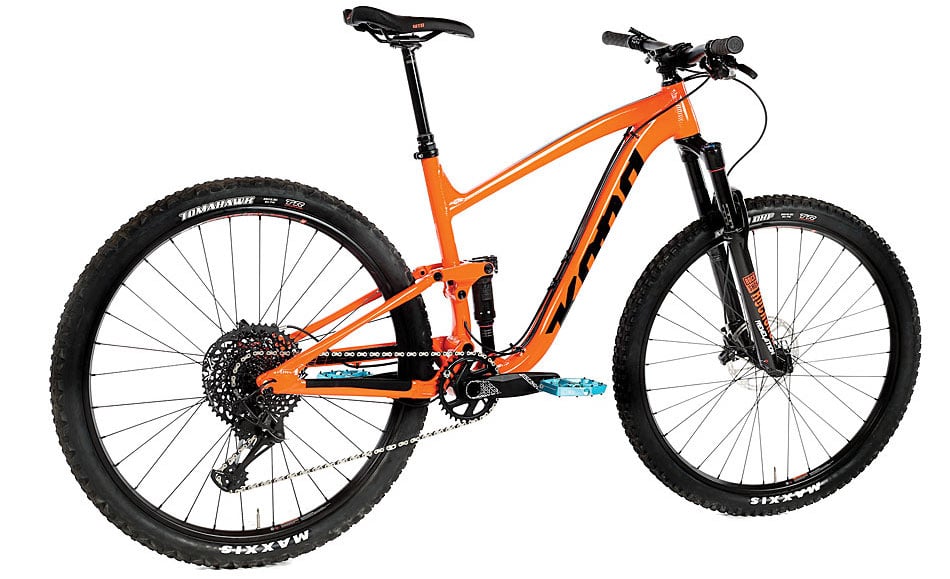 It’s hard to poke holes in the Satori’s build kit, especially considering its cost. Sure, there are higher-end suspension components on the market and lighter drivetrains, but those would likely double the cost of the bike. The Satori is a great example of a bike that balances value and performance well. We would recommend a few small upgrades, such as setting the wheels up tubeless, allowing for lower tire pressures and reduced weight. More aggressive riders may want to experiment with air-volume spacers to get the most out of the Satori’s RockShox suspension. Other than that, we would simply ride the thing till the wheels fall off. 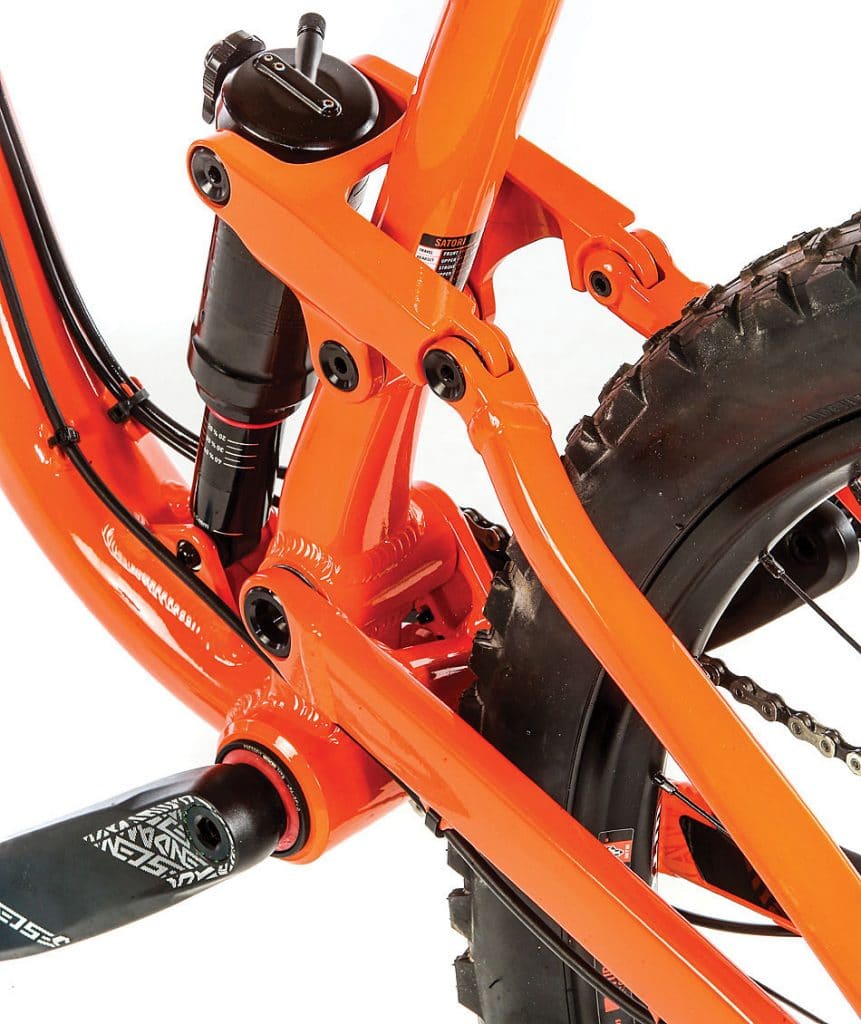 Carbon frames and high-end components aren’t in the budget for many riders. The Satori may not have all the bells and whistles, but at the end of the day, it’s truly a fun bike to ride and will likely put a smile on your face. We don’t want to call this an entry-level bike, as that wouldn’t do justice to its overall performance. Plus, its cost is slightly above the beginner level. That said, intermediate to advanced riders will find the Satori DL is an excellent mid-travel 29er that won’t require refinancing your mortgage. We give Kona’s all-new Satori DL a big thumb up.  www.konaworld.com 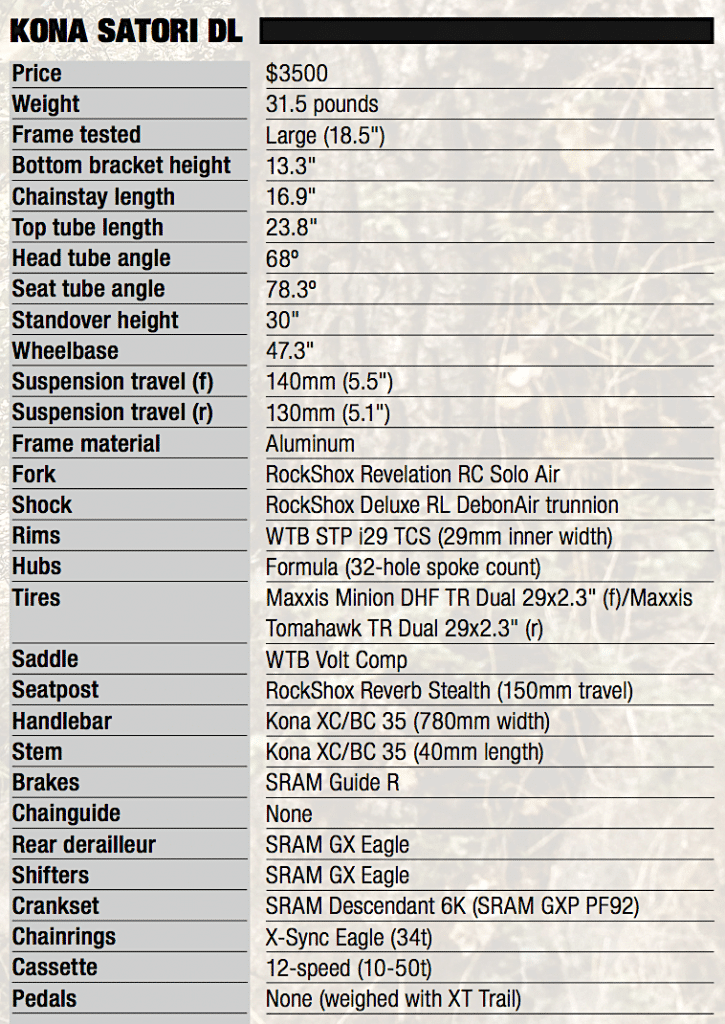