Don't NOX it until you try it

Don’t feel bad if you’ve never heard of the Nox brand. Neither had we until last fall’s Sea Otter when we randomly stumbled upon its U.S. importer’s booth. Nox is a German brand based in Berlin that got its start in 2004 and transitioned its focus fully to electric bikes in 2016. When we first laid eyes on its 180mm-travel Helium Enduro 7.1 with its removable Fazua electric-assist motor and battery, we just had to test it. The idea of a big-mountain, enduro-focused bike that didn’t require a shuttle or lift, yet could morph into a lighter bike when those options were available, almost sounded too good to be true.

The Helium features a beefy carbon front triangle that’s mated to an aluminum rear end. Its downtube is open at the bottom to house the motor and battery system while the bottom bracket bolts to the frame. The frame is only compatible with the Fazua system. It is sold in a “mullet” configuration with a 29-inch front and 27.5-inch rear wheel, but adjustable dropouts and a flip chip in the linkage allow for a 29-inch rear wheel as well.

There are only two sizes available—medium and large. Our size-large test bike comes with a 64.1-degree head angle, 73.6-degree seat tube angle, 466mm reach and 450mm chainstays in the short setting or 465mm in the long position. There are no water bottle or accessory mounts on the frame, but the drive unit’s cover has a storage compartment inside that can carry water bottles and other accessories when the bike is not in electric-assist mode. It took us a while to figure out what the two holes in the non-drive chainstay were for—a kickstand!

German e-bike drive-system manufacturer Fazua powers the Helium with its Ride 50 Trail system. This 250-watt motor can briefly produce up to 350 watts and creates 58 N/m of torque. It is powered by a 252Wh battery, and a second one is included with the bike. The motor-and-battery assembly—what Fazua calls the “Drivepack”—is removable and replaced with a lightweight cover, leaving just the bottom bracket assembly in place so it can function like a normal bicycle. The Helium weighs 45.4 pounds with the Drivepack installed and 39.3 pounds with the cover in its place. The bottom bracket is a frame-mounted angular gearbox that transfers power from the electric motor to the cranks. It also contains cadence and torque sensors. Fazua claims this piece alone weighs 1.2 kilograms (2.6 pounds).

The battery pack slides out of the Drivepack and can be charged in- or outside of it but not on the bicycle. It must be removed for charging because there is no charge port on the bike. There is a key-lock mechanism to keep somebody from walking off with your Drivepack.

A handlebar-mounted remote switch turns the system on and off and toggles through its four color-coded assist levels: none, Breeze (100 watts), River (210 watts) and Rocket (250 watts). A two-second hold of the button will give a 10-second-long, 350-watt boost of power. Those assist levels are completely customizable via a Toolbox computer software program and phone app. In there you can adjust max power and torque, the strength of power ramp up and power relation (how much input the rider must provide compared to the motor). You can also diagnose issues, update firmware and get live data in these programs.

A proven Horst link-style, four-bar suspension design paired with a Fox DHX2 coil shock achieves 180mm of rear-wheel travel. That is paired with an 180mm-travel, e-optimized Fox Factory 38 fork. Nox does not offer a setup guide, so we had to start from scratch in setting sag, then rebound, followed by compression, until we zeroed in on our ideal settings. It’s worth noting that we had to readjust sag when we moved the rear axle to the long chainstay setting’s greater leverage.

Although this bike is designed to rule the descents, it goes uphill surprisingly well with or without the motor installed. Even with the plush coil shock, suspension remains quiet while pedaling, yet active enough to add traction over uneven surfaces. Without the motor, you’ll notice the relatively heavy bike weight, but we climbed both steep technical pitches and gradual fire roads without drama. There was no perceptible drag felt from the bottom bracket, even by our most sensitive test riders. Nobody liked the lack of water bottle cage mounts and having to carry a pack on longer rides.

Unless the rider was one of those earn-your-turns types, overall climbing speed and enjoyment increased exponentially with the motor unit installed. At first, we were disappointed by the 58 N/m of torque compared to more powerful electric bikes we were testing, such as a Shimano with 85 N/m and Rocky Mountain’s 108 N/m; however, a quick tweak in the app where we boosted starting power gave us most of what we were missing. This essentially gave the motor a solid punch right off the bottom before leveling off and leaving much of the rest up to us. Then we were able to really use the lower power settings to conserve battery and save the Rocket mode for when we really needed it. Only on the steepest pitches did we notice a lack of torque, and even then, it was not as big of a gap as the numbers suggest. We tuned the Rocket mode up to the full 350 watts of output and got a warning on the app saying that it might overheat. Sure enough, after extended pulls in this setting, the system went into a lower-power, self-preservation mode, but no harm was done. Motor noise is on the quiet side of the electric-bike spectrum.

As well as it climbed, the bike was not without its quirks. Most riders thought the seat angle was too slack, especially in the low-chip setting where most preferred how it handled on the descents. The slack seat angle really becomes noticeable with the drive unit removed because of the extra effort involved, but it’s less of an issue with the electric assist. And, with a 29-inch rear wheel installed, the bottom bracket height is up there, giving the bike a “sit-on” instead of “sit-in” feel. A sit-in feel is generally preferred by the wrecking crew. Measured bottom-bracket height was almost 15 inches with the 29-inch wheel in the low chip setting. This is over a full inch higher than a Specialized Kenevo SL. On the flip side, we didn’t have to worry about pedal strikes, even as the bike compressed into its generous travel.

Simply put, the Helium is an animal on the descents. With gobs of quality wheel travel and a stiff, predictable chassis, even the roughest trails didn’t phase the Nox. We experimented with both the standard “mullet” 27.5-inch rear-wheel setup and a 29-inch, with each delivering a different feel. As one might expect, the mullet configuration snapped through tight corners a little easier and seemed a bit more flickable overall, while the 29-inch wheel carried speed better. Most testers preferred the 29-inch setup. The bike just felt right and better balanced, even with the tall-feeling bottom-bracket height. Still, there were times in the steeps when we felt a lower center of gravity would have helped. It felt like the bike wanted to stand up mid-turn, and it seemed easier to get off balance while following ruts.

From bike-park settings to raw enduro-style downhills, the Helium is willing and able to push the ragged edge. We need to give a huge shout-out to Magura’s MT7 brakes. Not only are they insanely powerful, but they were fade-free and noise-free throughout the test and offered above-average modulation and lever feel. They stood out on every descent and increased the overall capability of the bike. They really are that good.

WHY REMOVE THE MOTOR?

Other than “who is Nox?,” the most asked question about this bike is, “Why would anyone want to remove the motor?” Turns out there are quite a few reasons. Since it generally rides better overall without the weight, any time there was a shuttle or lift available, we ditched the motor. A few thought it was a little more planted feeling with the extra weight, but most testers preferred the lighter-feeling front end and overall agile feel without that weight. And then there were the trails we wanted to ride that were not eMTB legal. We simply installed the cover and rode where other electric bikes could not. We expected to get the stink eye from somebody, but because of the streamlined looks of the bike and the obvious effort we were putting out, this never happened. The third reason you might want to remove the motor is if you run out of battery but want to keep riding and don’t have access to a charger. There is a little extra drag with the motor installed, though, so we never rode with a dead battery on purpose.

The pro build tested is top-notch and needs no upgrades. Continental’s Kaiser Projekt tires were not our favorites on the dry SoCal trails but seemed to work better when things got wet and loamy. We struggled with the touch-style remote switch, which is activated with a light touch. We had to look down to see if the mode changed instead of feeling it with a tactile click. And even after turning the sensitivity to its lowest level in the tuning app, we still mistakenly changed modes while riding. 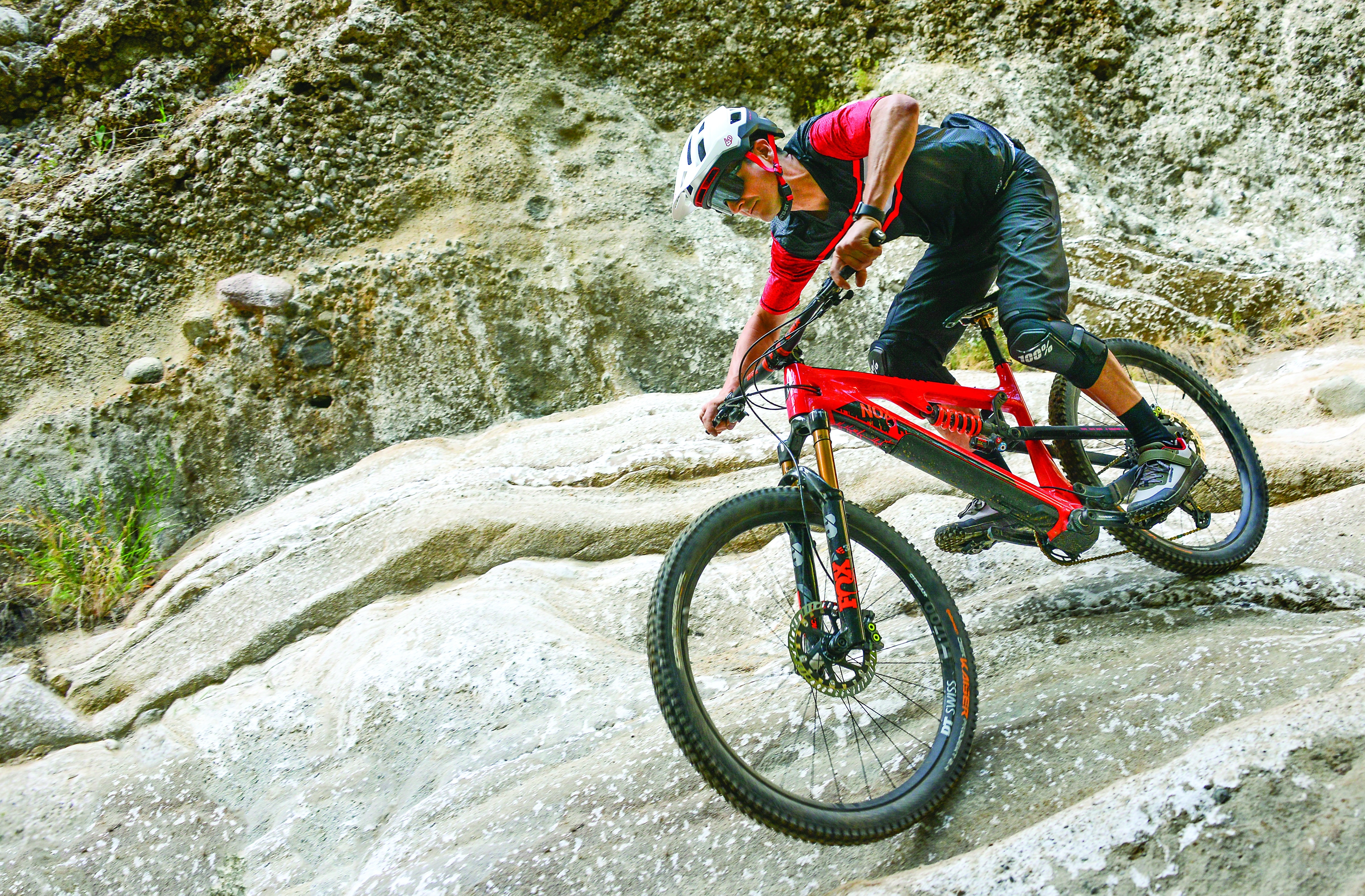 A bike like the Helium with a lighter electric-assist unit is ideal for riders who maintain a certain level of fitness and do not need to rely on big power or large batteries. Even though it’s a big bike, it doesn’t have the weighty feel of more powerful and higher-capacity class-1 models. We wish the bottom bracket were a touch lower and the seat angle steeper, but otherwise it’s a well-sorted mountain bike. The removable drive unit really expands the riding opportunities and versatility of the bike, too. Is the eMTB of the future a mountain bike that morphs from electric assist to pedal only and back again? After experiencing the Nox Helium Enduro 7.1, we certainly hope so. 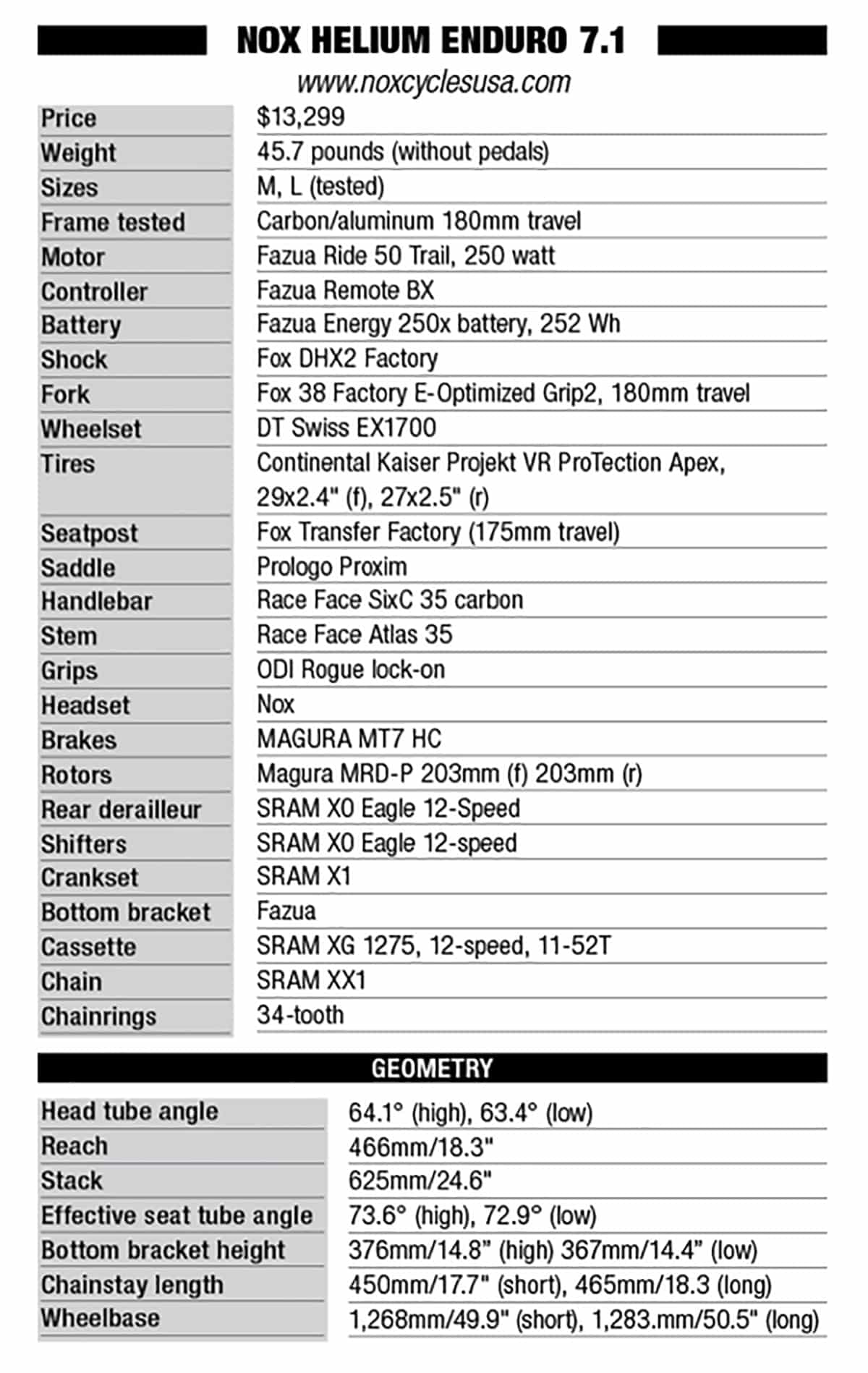 THE RACE SCHEDULE FOR THE SEA OTTER CLASSIC HAS BEEN RELEASED