There are few bikes that have as strong a reputation on the trail as the Remedy. Over the years this bike’s suspension design, geometry and wheel size have evolved to suit the needs of the modern rider. The previous two generations delivered solid performance and were more than ready for rowdy riding. For 2019, Trek has unleashed yet another Remedy with a few modern tweaks. 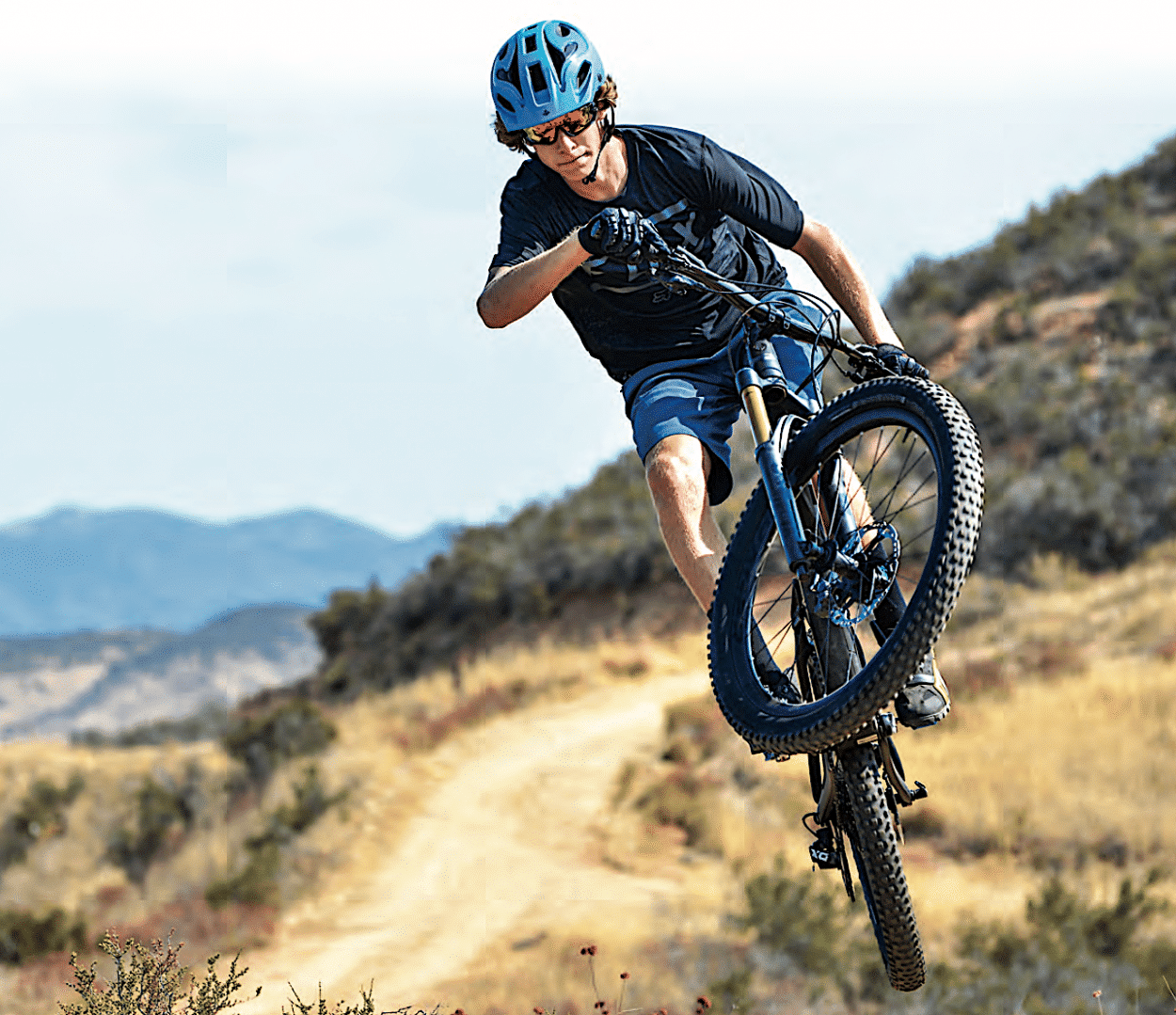 The Remedy has varied in purpose over the years, ranging from 27.5- to 29-inch wheels and from 140mm to 150mm of rear travel. With the longer-travel Slash dominating the enduro category in Trek’s lineup, the Remedy functions as an all-purpose trail bike with all-mountain tendencies and a generally rowdy pedigree. This bike will do just about everything comfortably without overwhelming the rider in terms of travel and wheel size. 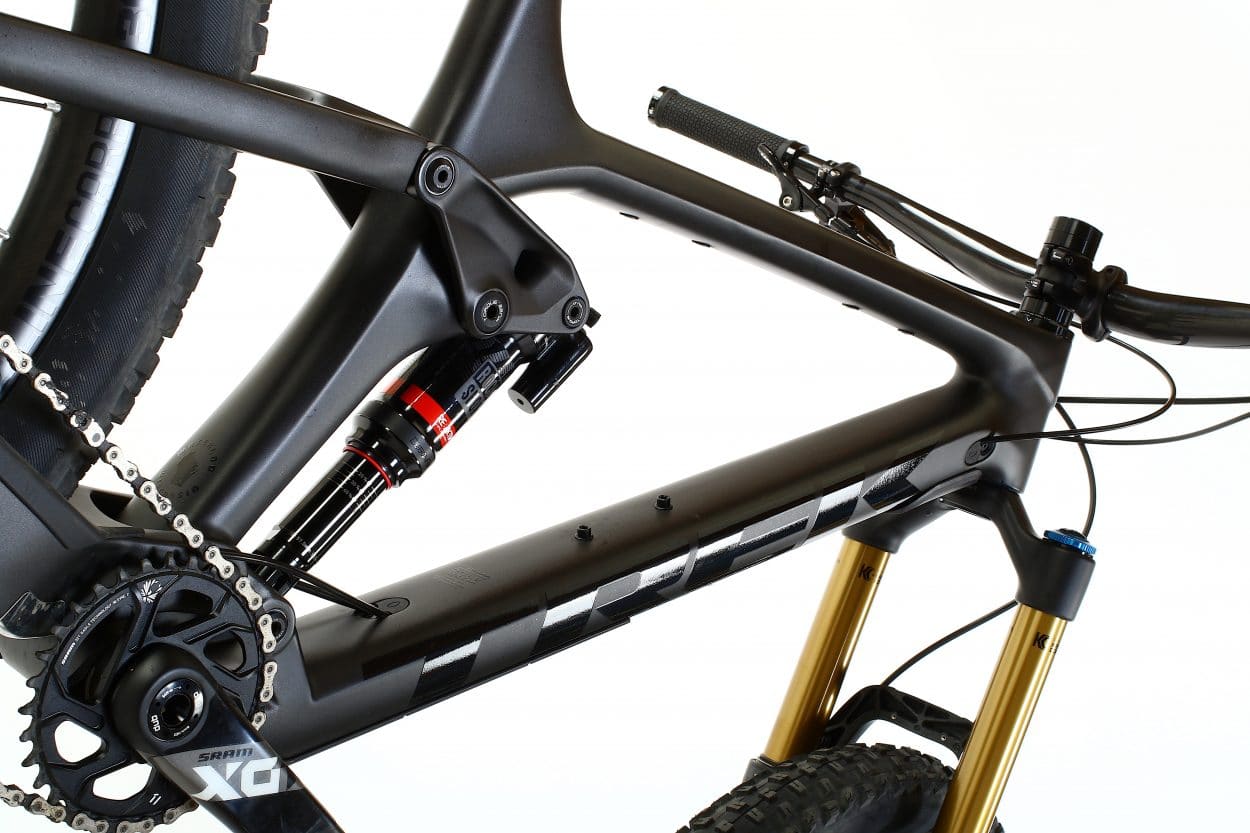 Trek has introduced several new technologies in the last two years that the previous generation of Remedies lacked. For this model, Trek updated the geometry, going a bit longer and slack- er while still using its Mino Link. The Mino Link gives riders the option to adjust the geometry between two positions—high and low. The high setting keeps the bottom bracket up and the front end a bit steep while keeping the reach a touch longer. The low setting drops the bottom bracket, slackens the front end and shortens the reach.

Aside from the geometry, the Remedy carried over the Straight Shot downtube, keeping the frame design beefy and stiff. Along the outside of the downtube is a built-in frame guard to protect against trail debris and damage from rubbing against a tailgate pad. This year Trek ditched the Full Floater link, similar to what was done with the Slash. Eliminating the Full Floater link allowed Trek to increase the frame and rear triangle stiffness without compromising the suspension performance. Similar to other Trek frames, the Remedy uses Trek’s Control Freak internal cable routing and PressFit 92 bottom bracket shell. 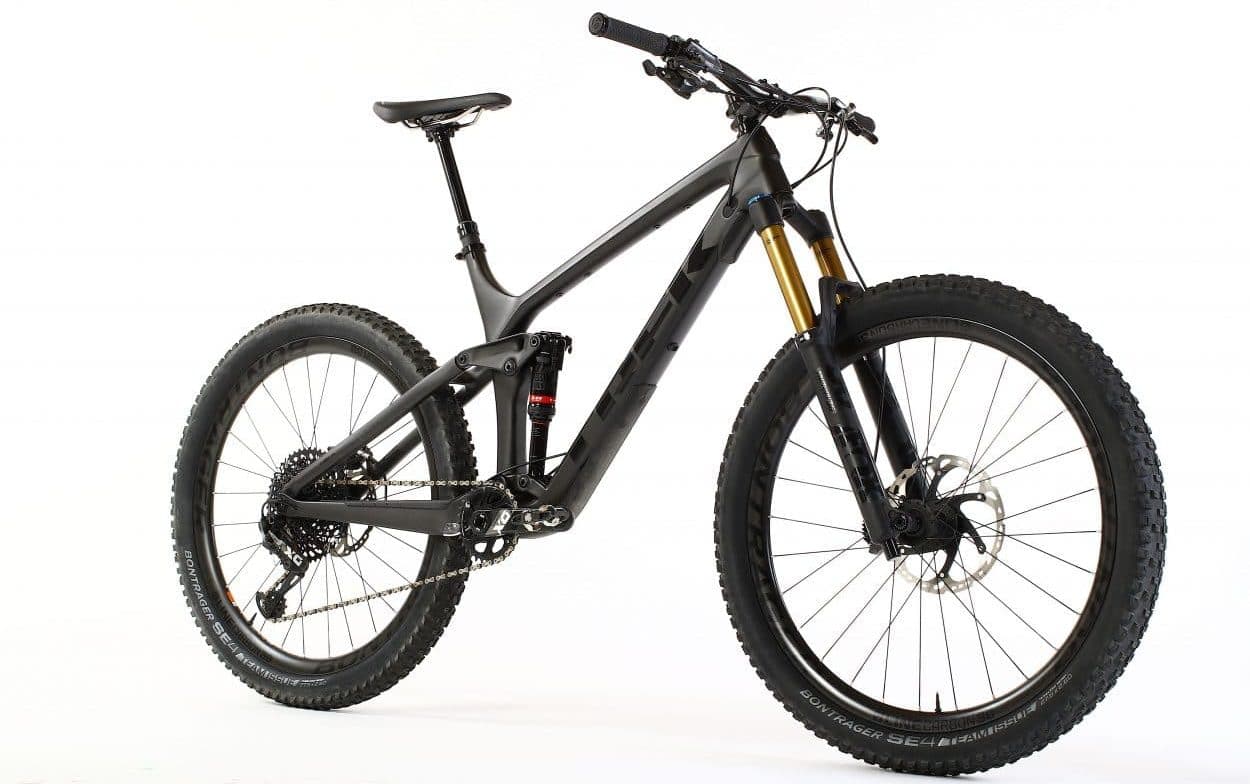 Last year Trek announced its new RE:aktiv with Thru-Shaft shocks that eliminated the Internal Floating Piston (IFP). This shock was found on the previous-generation Remedy and has been carried over to the 2019 version. Along with the proprietary shock is Trek’s ABP suspension design that allows for better traction when braking.

There are several versions of the Remedy available, ranging from aluminum to carbon fiber frames. The 9.9 tested is Trek’s highest-end version with a retail price of $7000. Riders can get into the alloy versions for as little as $3300 or a carbon fiber frameset for $3000. 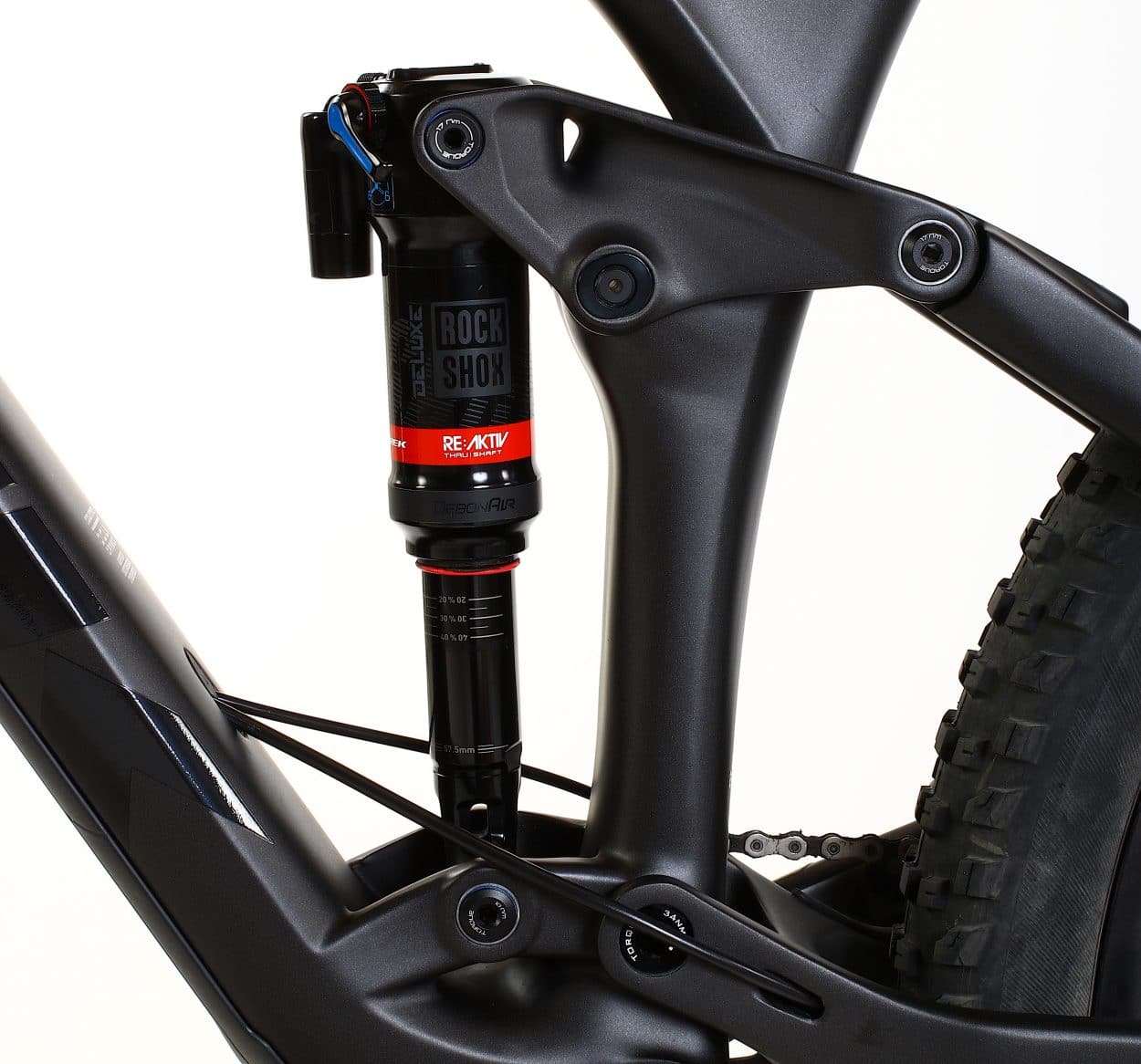 Trek put a lot of research into its suspension platform, and the RockShox Deluxe with Thru-Shaft shock was a major standout during our testing. Up front, the Fox Float 36 with Grip2 balanced the bike and gave our test riders plenty of adjustments to dial in the feel of the fork. The stock Bontrager Carbon Line 30 wheels gave the 2.6-inch-wide SE4 tires a nice profile and offered quick hub engagement. This was our first run with Shimano’s new four-piston XT brakes, and they delivered plenty of stopping power on steep sections of trail.

Setting sag: Trek offers a suspension setup guide on its website with sag numbers and rebound and compression settings. We started with Trek’s recommended settings, with 30-percent sag in the shock and about eight clicks of rebound from closed. The fork took some time to dial in, but we started with 20-percent sag with two volume spacers in the fork. We spent quite a bit of time playing with the high- and low-speed rebound settings that come with the Grip2 damper and found the right setting was subjective based on the trails we were riding on the low-speed setting. The high- and low-speed compression on the fork took a couple of rides to dial in, but once we found the sweet spot, our test riders were happy with the performance and ride quality. 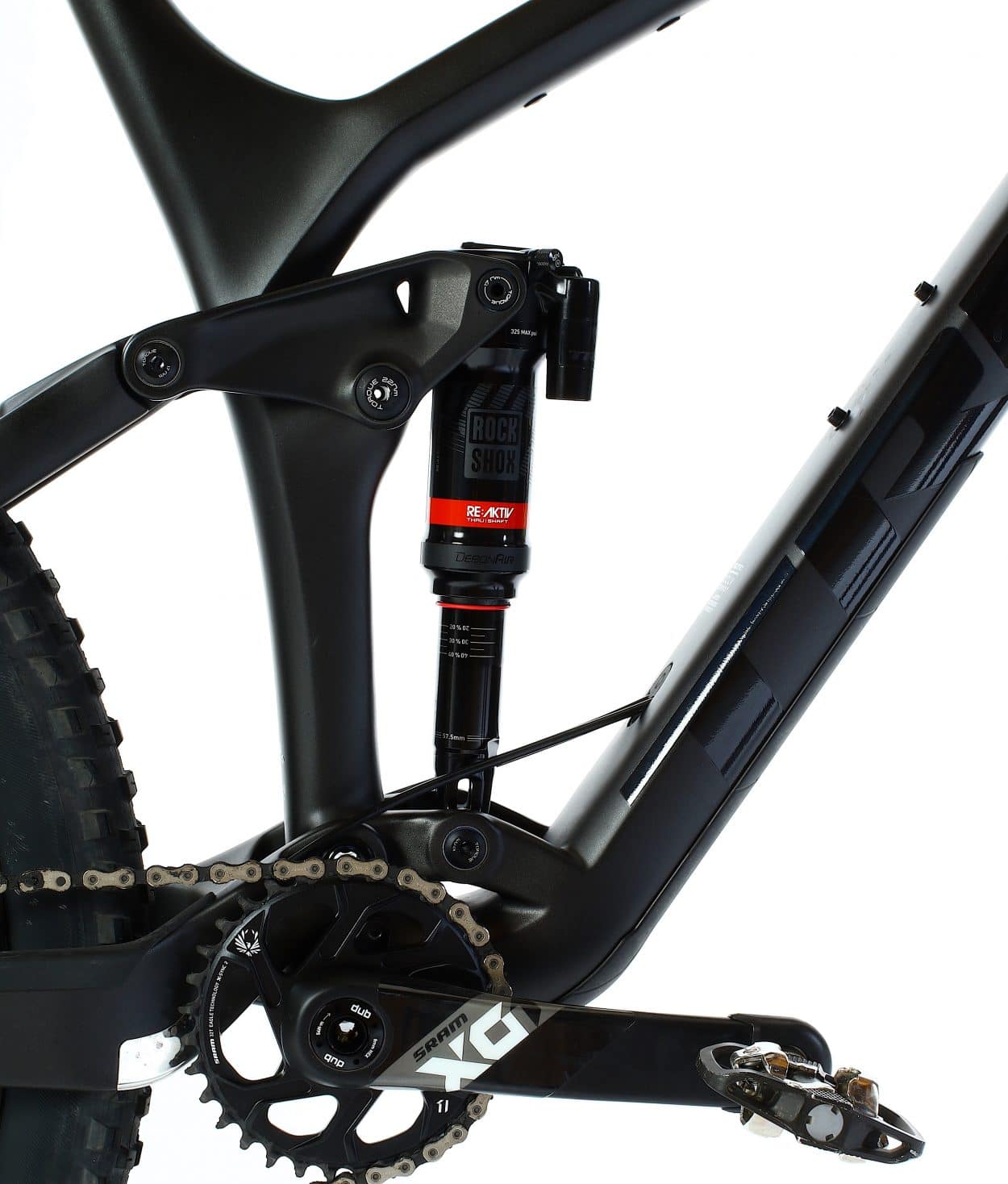 Moving out: The short 50mm stem and longer reach gave the Remedy a modern fit, especially paired with 780mm-wide handlebars. Most of our test riders couldn’t get comfortable with the stock handlebars, as they didn’t offer as much sweep as other bars we have ridden. We dropped the tire pressure a touch lower than what we would normally run in the 27.5×2.6-inch Bontrager SE4 treads. This width benefits from the larger air volume without compromising speed.

Climbing: The Remedy is an efficient climber for a bike with this much travel. While you won’t set any personal records on the long grinds, you’ll be able to spin the climbs out comfortably. The wider 2.6-inch tires gave us plenty of traction when clawing up steep bits of singletrack and rocky sections. Our test riders were able to shift their weight over the front end comfortably to cruise over technical obstacles.

Descending: Trek designed this bike to descend, and with the suspension open and an ambitious rider on board, there is very little the Remedy won’t do. Dropping into steep sections of trail, the long reach allowed us to shift back behind the handlebars and confidently pick tight lines. The Fox 36 fork was plush off the top and had a healthy amount of mid-stroke support to keep our test riders sitting up. The RE:aktiv with Thru-Shaft shock has a very balanced feel in everything from small bumps to bottom outs. Whether in high-speed or slower technical sections, the shock was controlled and helped keep the Remedy balanced. The Remedy was plenty playful when descending singletrack, looking for bonus lines and not afraid to pop off any lip or jump.

Cornering: Dropping into corners, the wider 2.6-inch tires grabbed at the trail, allowing us to lean the bike over confidently. The smaller 27.5-inch wheels were easy to whip through switchbacks and tight turns. The wider 780mm bars gave our test riders plenty of leverage and played a part in encouraging our test riders to lean the Remedy over as far as they could.

During our testing, we never messed with the stock handlebars. Most of our test riders opted for a different pair of bars with a little more sweep. We strongly recommend taking your time dialing in the fork and even having your local Trek dealer help you find the right settings. The Grip2 damper works quite well but does have a broad range of adjustment. 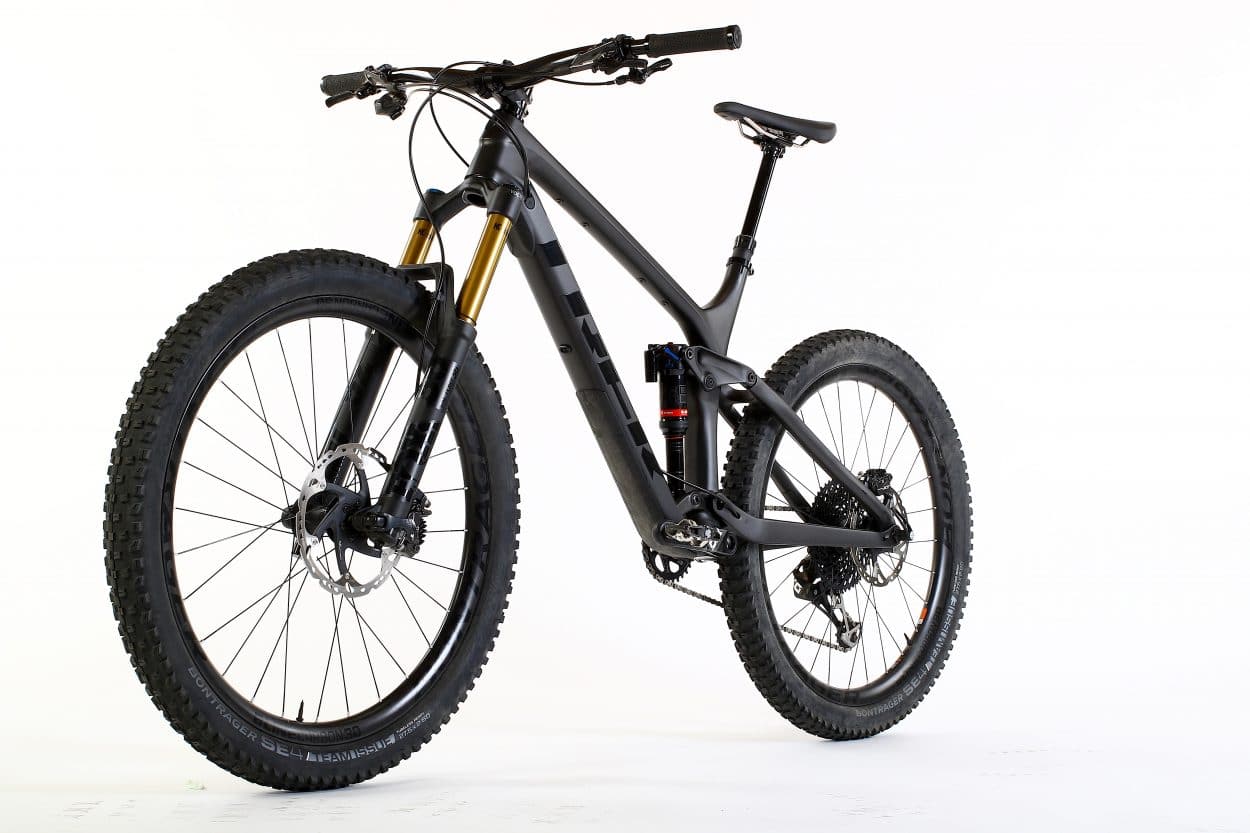 Over the years the Remedy has evolved with the needs of trail and all-mountain riders alike and has continued to prove itself a burly machine. This iteration of the Remedy is sturdy and inspires plenty of confidence to keep the tradition alive by riding hard and having fun on just about any trail on the mountain. If you want a bike that won’t shy away from double-black-diamond lines and will keep coming back for more, the Remedy has just about everything you’ll need. www.trekbikes.com 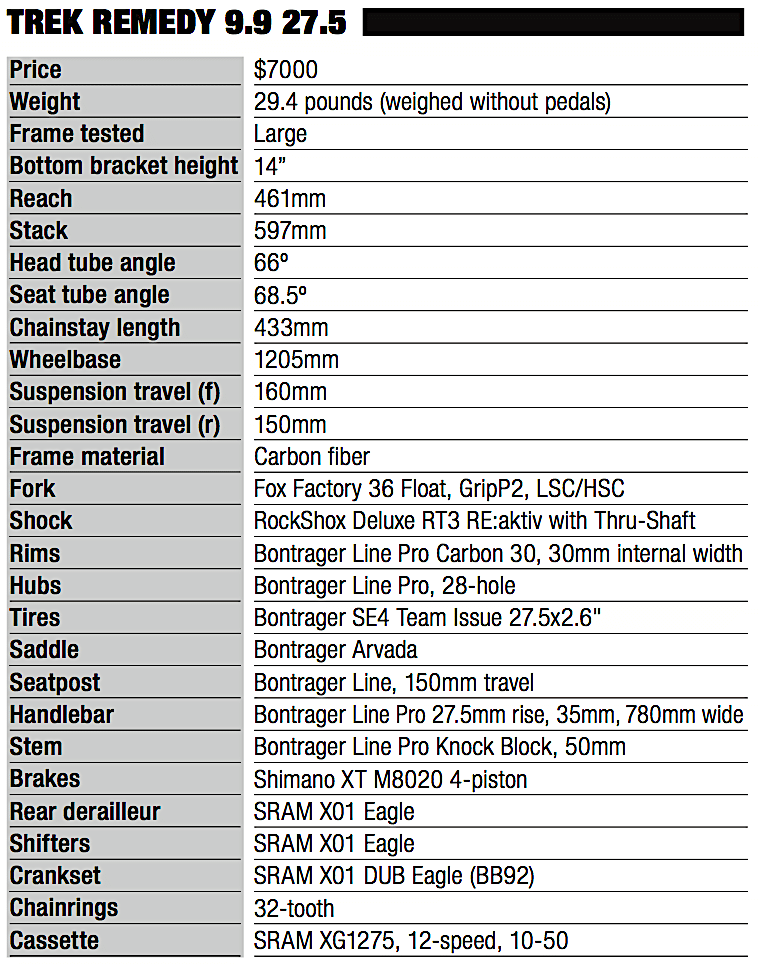