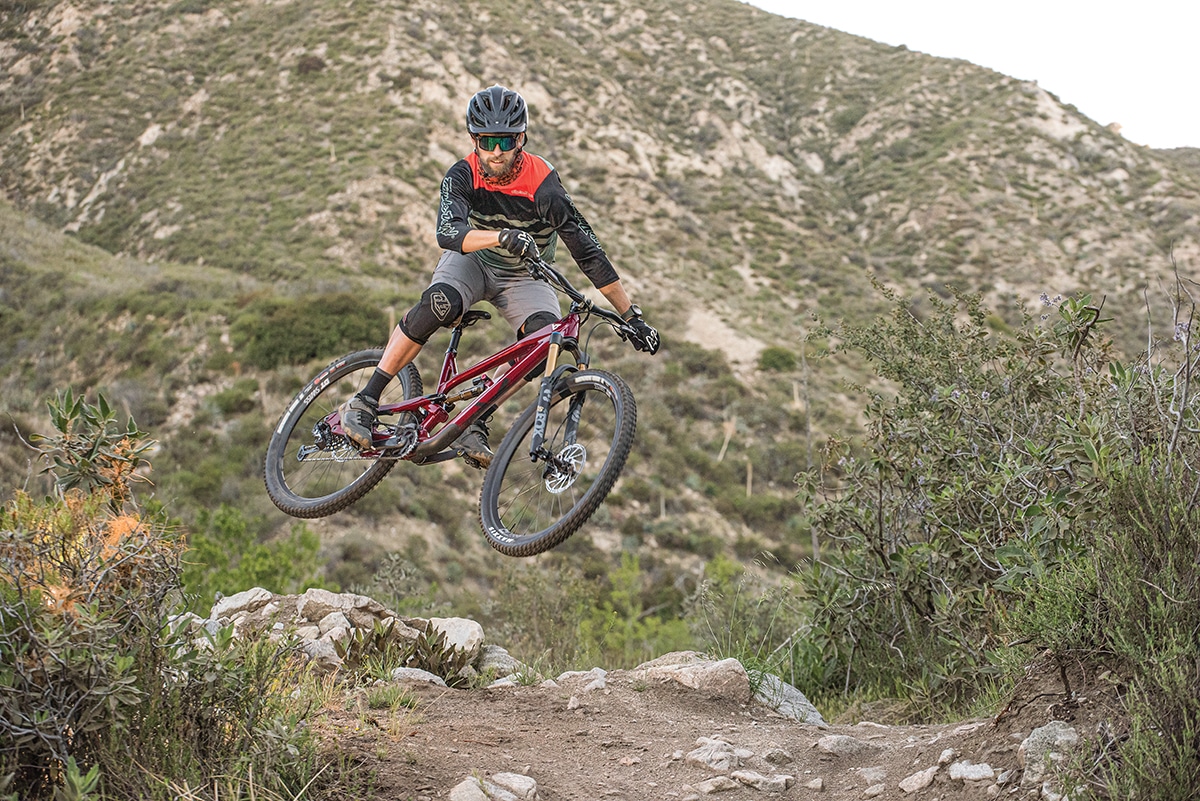 YT is a German brand with a consumer-direct approach to getting people on bikes. YT is known for creating bikes that focus on going downhill fast with some added style. YT tends to sponsor athletes who take on events such as the Red Bull Rampage, World Cup enduros and downhill racing.

You may recall the test of the Izzo in our November 2020 issue. The Izzo proved to be a great mix for the type of rider looking to blur trail riding with a more aggressive cross-country style. Let’s face it, bikes have been getting better and better for multiple disciplines. So where does that land YT’s new Jeffsy, which is intended to be used for all-mountain? We threw a leg over this latest test subject to find out.

The big attention grabber is the eye-popping Vlad Red of the Jeffsy Core 4 build. This latest version of the Jeffsy is sold as a carbon frame and is also available in an alloy option. Both versions feature 150mm of travel front and rear. The frame has internal cable routing, an integrated “chain-suck” plate that prevents the chain from falling off into the frame, YT’s virtual four-link (V4L), and now a flip-chip at the lower shock mount. This chip makes it possible to adjust the geometry according to the terrain and riding style. The geometry in the low setting has the bike sitting with a slack 66-degree head tube angle. This is combined with long-reach numbers that go up 20mm between each size. This last bit is a pet peeve of ours, as there is no room to store a traditional water bottle. Instead, owners must purchase a specific bottle YT makes to properly clear the shock.

YT offers four models of the Jeffsy, three builds in carbon and one option in an alloy. The Core 2 is the alloy build priced at $2799 and is equipped with Fox Performance suspension and SRAM’s NX Eagle drivetrain. The Core 2 is the only option offered both in 29-inch and 27.5-inch platforms. The carbon-framed Core 3 is priced at $3999 with Fox Performance Elite suspension and a SRAM GX Eagle drivetrain. The limited-edition Blaze option is the same price as the Core 3 but is built with RockShox suspension. We got our hands on the Core 4 model that retails for $4999 with a SRAM XO1 Eagle drivetrain and Fox Factory suspension. As we’ve stated before, YT’s direct-to-consumer model allows the company to achieve some pretty incredible price points, even with the highest-end components on the market.

There is great harmony and easy tunability with Fox’s dependable Factory components being utilized for the fork and shock of the Core 4. As mentioned, the rear suspension pivots on YT’s V4L-produced 150mm of travel. This design is intended to be sensitive off the top of the shock stroke with good mid-support and plenty of progressiveness at the end-stroke. More on the feel of this suspension coming up!

YT makes the bike easy to set up out of the box. All steps are labeled with a 1-2-3 guide when you first open up the packaging. The bike even comes already set up tubeless with sealant installed and extra valves just in case. There are handy tools included for assembly; however, we do recommend stopping by your local shop to make sure everything has been done correctly. Once we were confident all was in order, we were keen on seeing how the relaxed geometry could tame aggressive terrain while still allowing us to climb and stay out all day.

In comparison to the Orbea Occam we tested, the latest Jeffsy is not as capable/comfortable in long, sustained climbs to the top. The Jeffsy is very similar to the Salsa Blackthorn we tested, but it is slightly more comfortable in most situations. The rear suspension design maintains support while pedaling and improves efficiency. Given the Jeffsy’s size and geometry, it is still remarkable when hammering away at a climb, but the real reward is on the downhill.

The suspension design allowed for a nice little pop that got the bike airborne whenever we wanted. With this controllable pop, the rear end is quite playful and can be flicked easily. On the other side, the progressiveness towards the end of the stroke ensured the rear shock never bottomed out, even on bigger-hit landings and jumps where we “sent it.”

Some 29ers can lose the ability to maintain speed through a corner, but the Jeffsy remained composed while being quick in and out. We spent little time in the high setting on the Flip Chip, as the low option felt ideal for our test laps. 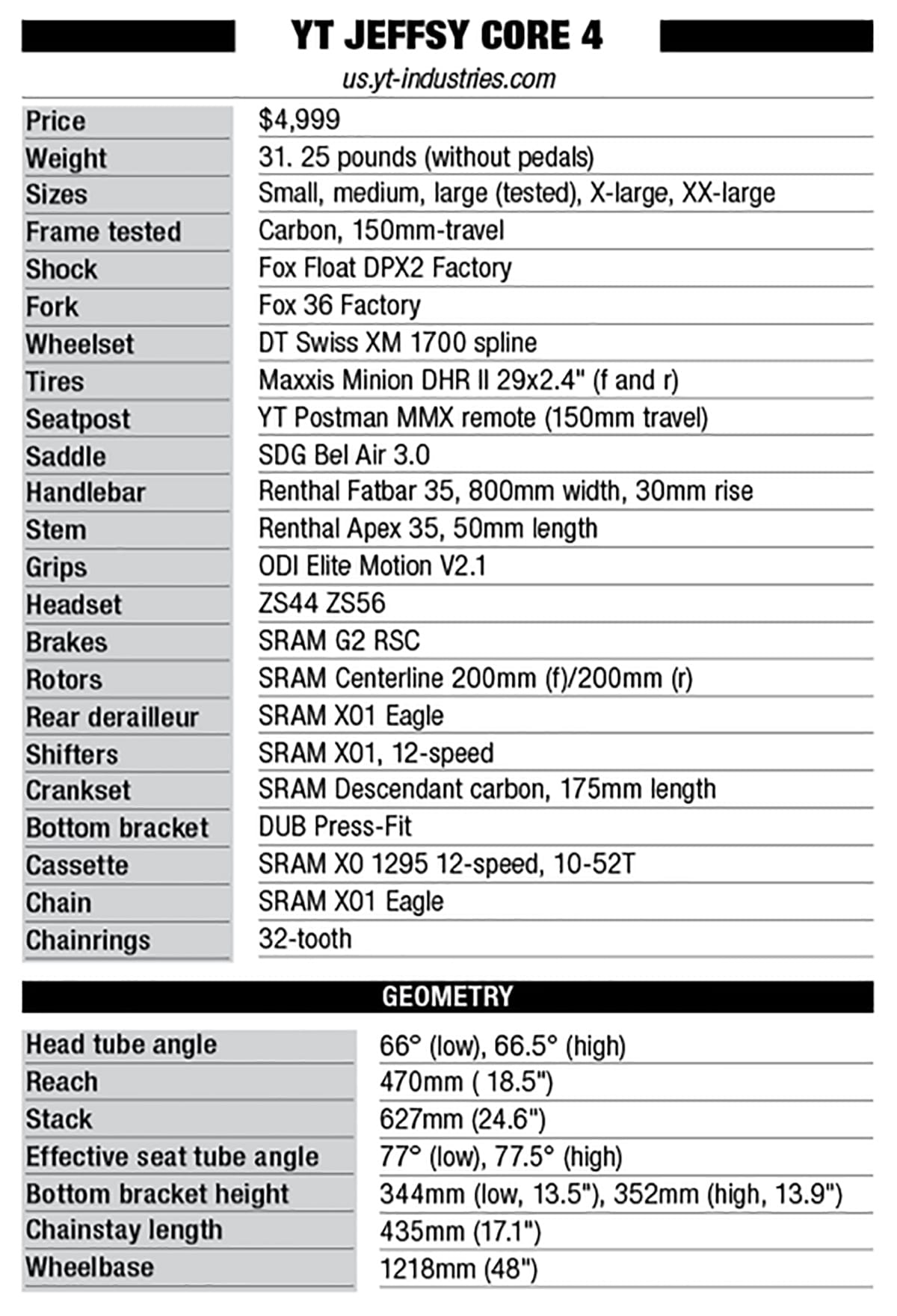 The water-bottle clearance is, as mentioned, a bit of a bummer. It is worth it for owners to spend the extra bucks on a Thriftmaster from YT so the bottle can clear the rear suspension. Beyond that, there is little to complain about, with top-of-the-line components on a carbon frame right at $5000. While the Core 4 model we tested is sublime, we think we would be just as happy spending $1000 less on the Core 3 build.

There is no denying that this bike is correctly categorized as a dedicated all-mountain machine. We rode bike parks, climbed up to enjoy riding down our local flow trails, leaped canyon gaps, and barreled through World Cup-worthy rock gardens. The adjustability provided by the Flip Chip was notable. We are seeing this more on modern bikes. On the Jeffsy, it does change up the feel to suit the rider’s style. As mentioned, we leaned on the low setting, but the high setting did have a performance advantage when dealing with sustained climbs up a mountain.

With so many options available, it can be hard to find the bike that is right for you. The Jeffsy hits the mark for a rider who wants to go a step beyond the typical trail bike to one with some enduro capability. This rider will want to take on enduro-course terrain while still being able to comfortably enjoy a pedal up the hill for another lap. If this sounds like your wish list and you can get your hands on a Jeffsy in the industry’s current climate, we wouldn’t hesitate to recommend this fun-filled experience on a bike.