Alchemy began its journey in 2008 when founder Ryan Cannizzaro met Matt Maczuzak, an engineer with a passion for building carbon frames. Over the next few years the company manufactured beautifully crafted drop-bar bikes out of its Denver, Colorado, facility. Fast-forward a few years and the company began to develop a hunger for dirt. The easy route would have been to launch a hardtail, but Alchemy isn’t a company known for cutting corners. Instead, it enlisted the help of David Earle, the brains behind Virtual Pivot Point (VPP) suspension, to design a unique system that would complement the craftsmanship and attention to detail Alchemy puts into each frame. This group of wizards went to work brewing up the ultimate enduro bike, and the Arktos hit the market in 2016. In fact, you can find our full review of that bike on our website or in our July 2016 issue.

Two years later Alchemy returned to the lab and began the process of updating the Arktos with a new pair of shoes. The 29-inch-wheel model was soon unveiled. We patiently waited for our new dream machine to arrive, and once it did, we packed our gear and headed for the trails faster than a couple of fleeing banditos.

The Arktos 29 features geometry similar to that of the previous 27.5-inch model that’s still listed in Alchemy’s lineup, but the bike has been modernized to keep up with industry trends. The updates include a longer reach, a slightly lower bottom-bracket height, and a 1-degree steeper seat-tube angle.

The frame keeps the same overall look; however, there are a few more notable changes. To increase lateral stiffness at the rear wheel, both models use a fully triangulated rear end, but the 29er has an extra trick up its sleeve. Alchemy designed the Arktos 29 with a 157mm Super Boost rear axle to ensure the rear end would be as stiff as possible. From a rider’s perspective, this means the bike will hold its line better and quickly change direction on command.

Other features include fully internal cable routing and a directmount chain guide. Custom-tuned Fox DPX2 shocks come on every frame; however, the mounting points and large size force riders to store their water bottles in the not-so-fashionable, under-the-frame position. 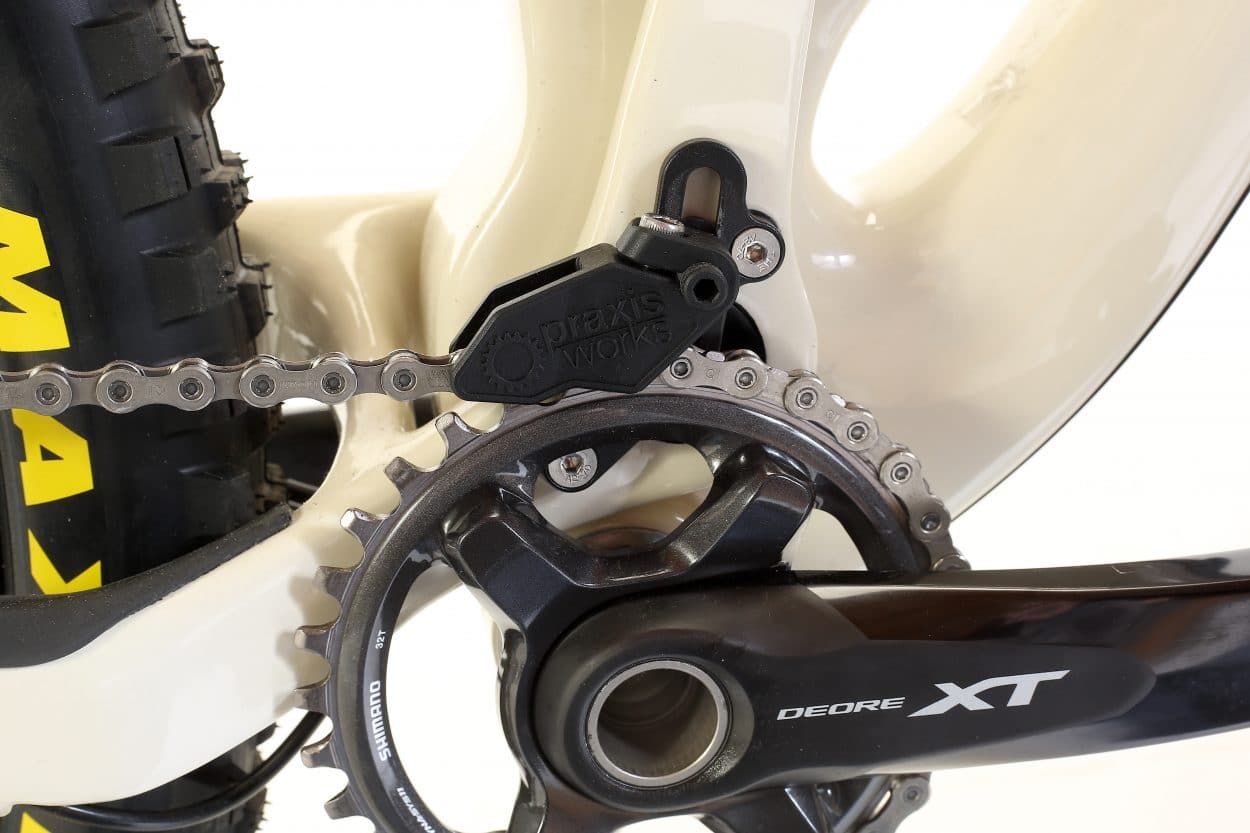 Our test rig came equipped with a Fox and Shimano build kit that made a strong impression on all of our testers. Alchemy offers the Arktos 29 in four build kits, ranging from SRAM GX builds up to Shimano XTR-level kits. Pricing ranges from $5,200 to $10,500. Our XT build kit came in much closer to the lower price point. Now, don’t get us wrong; we’re not going to sit here and say these bikes are offered at an entry-level price point, but considering the premium frame manufactured in the United States with exclusive, patented suspension, it’s easy to justify the price the Arktos demands. 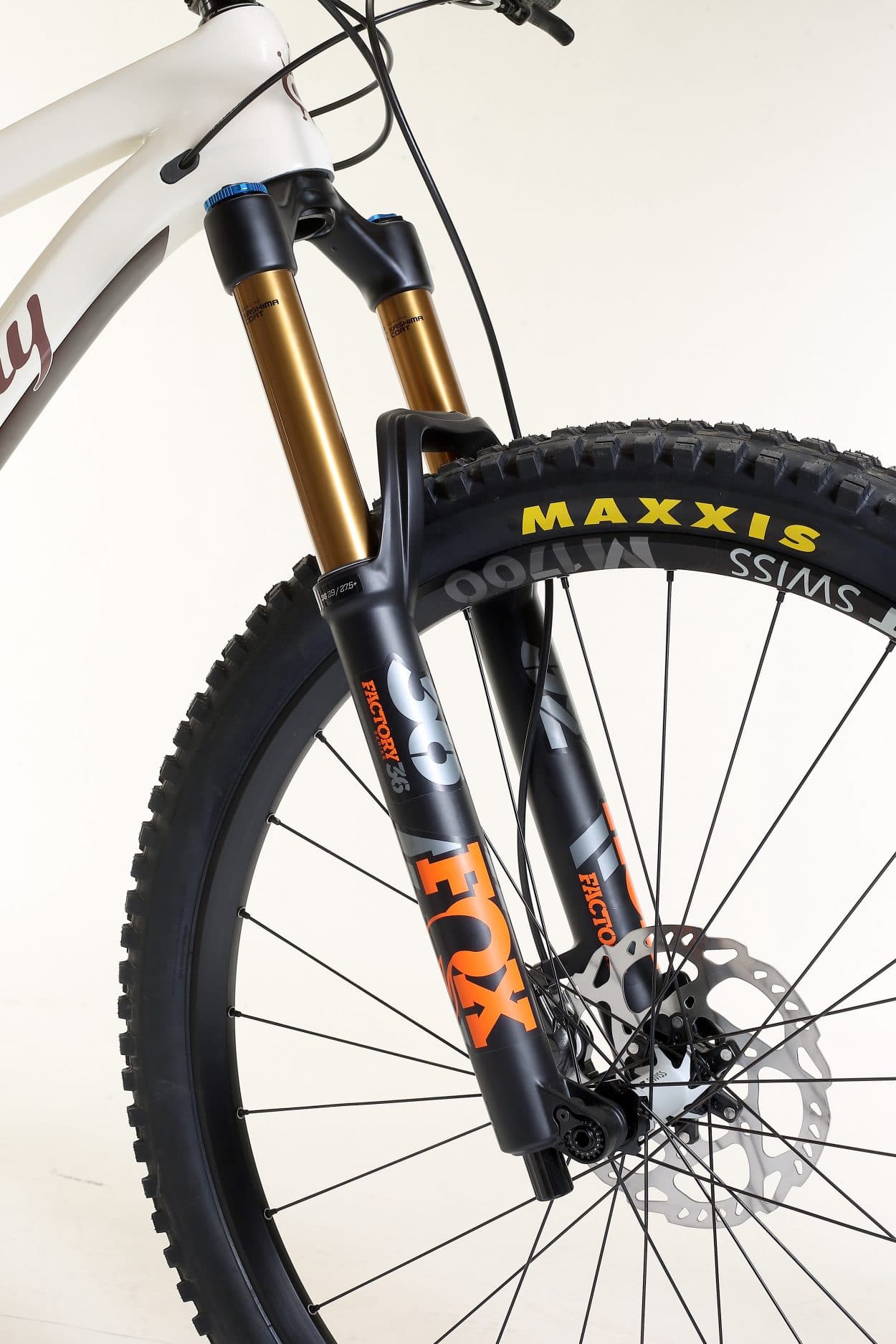 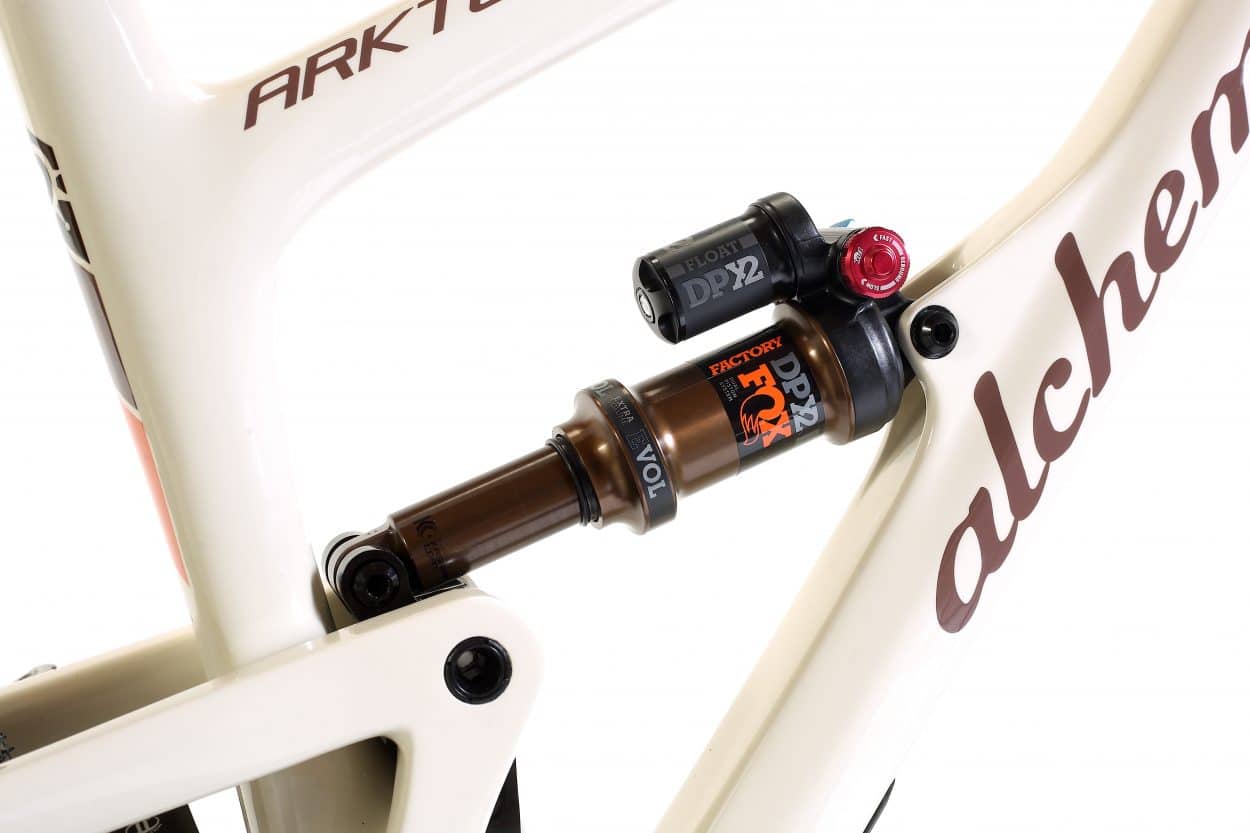 The Arktos rolls on Sine suspension, developed by David Earle, the designer of VPP, as mentioned earlier. The reason for the Sine name is that the suspension curve closely resembles a Sine wave. The system uses two short links designed to increase stiffness, and, for riders less interested in technical details, it offers a cleaner and sleeker overall look. The suspension system has a slightly regressive shock rate at the very beginning of the stroke to create a a plush feel off the top. It then becomes progressive as the lower link changes direction, providing a supportive mid-stroke, and finishes off with a regressive rate towards the last 15 percent of travel, allowing the use of all of its 140mm of suspension travel. 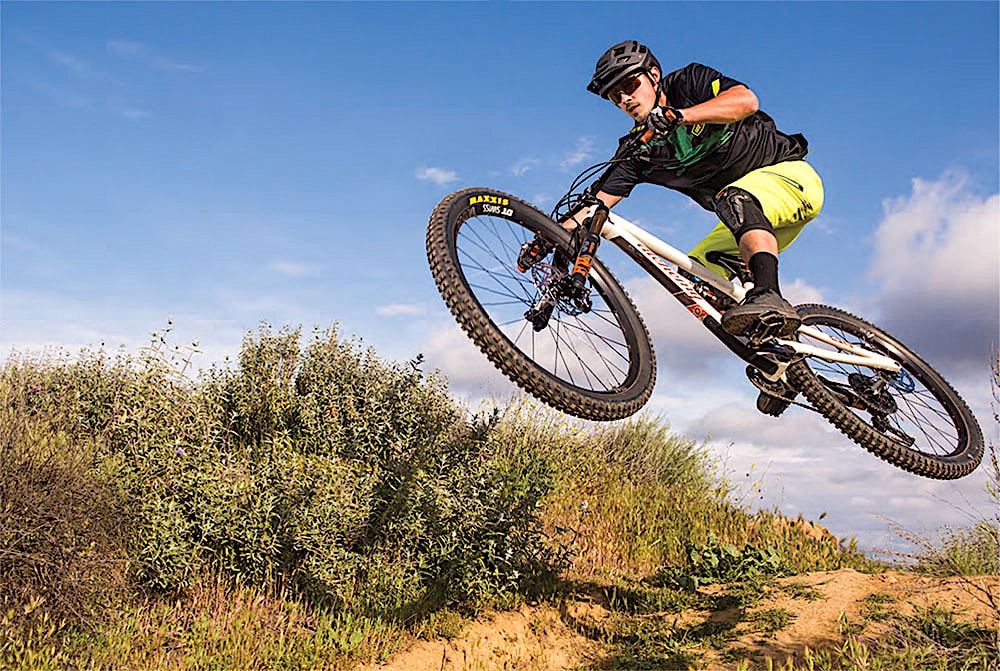 Climbing: When it comes time to earn your turns, the Arktos doesn’t shy away from hard work. It’s happy to get its wheels dirty, whether chasing a long and strenuous fire-road climb or punchy and technical ascents. Thanks to the initial plush feel at the beginning of the shock’s stroke, the Arktos maintains traction, but when sagging into the travel nearing the mid-stroke, it provides an efficient platform for powering up the trails. 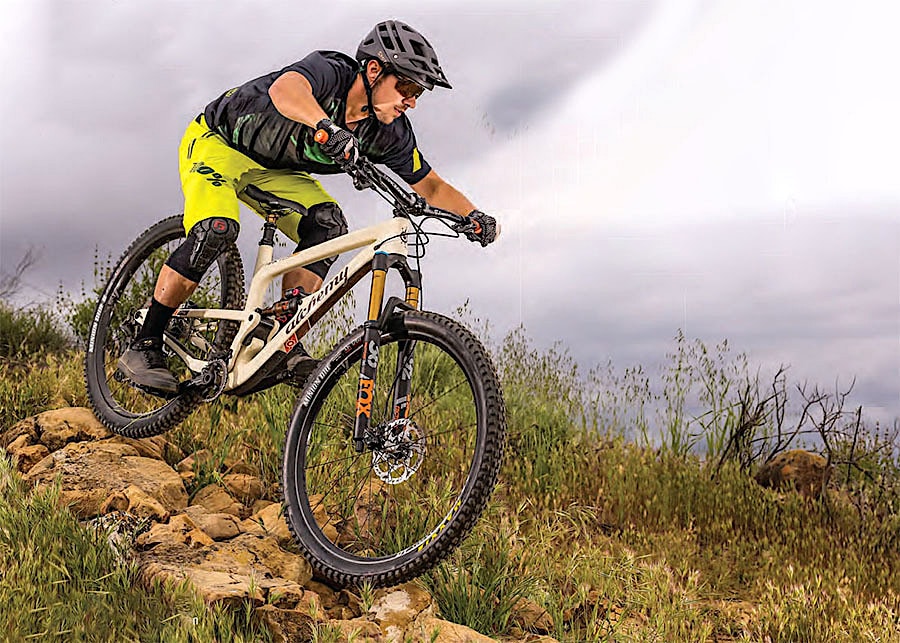 This bike truly shined during climbs, providing a planted front end even in steep situations. This actually came as a bit of a surprise, since the 160mm fork gave the front end a high feeling compared to other bikes with travel numbers more closely matched. That said, our testers had no issues blasting up climbs with the shock set in the open position. Although this bike is built to handle the rigors of enduro riding, the Arktos’ climbing prowess leans more towards the trail bike category. 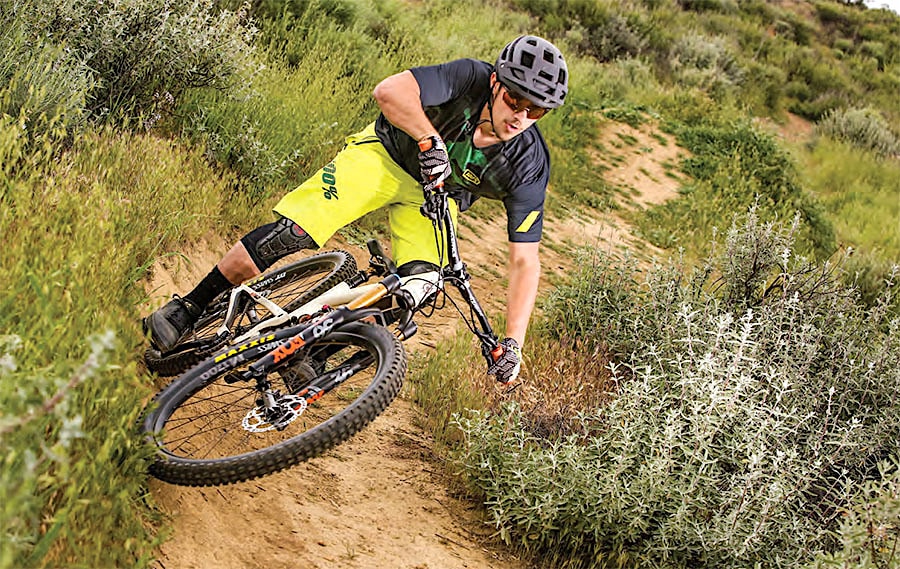 Bikes with mixed front and rear travel often have a great feel during descents, and the Arktos is no exception. This bike is a true shredder built for riders who love to pop off every feature and throw in a bit of style. The Sine suspension feels the best right in the middle of the stroke, while the 160mm-travel Fox 36 fork dances down the trail with the grace of a ballerina. With the last 15 percent of travel becoming less progressive, the bike finds the bottom of its travel easily; however, that’s not a knock to its design. The Arktos maintains a bottomless feel thanks to the natural ramp-up that occurs when you compress an air shock.

Our testers found this bike to be the most fun on flow trails with jumps and berms all the way down; however, rockier trails were still a welcome challenge. Thanks to tall 29-inch wheels, the newer version of the Arktos rolls over choppy trails with ease. 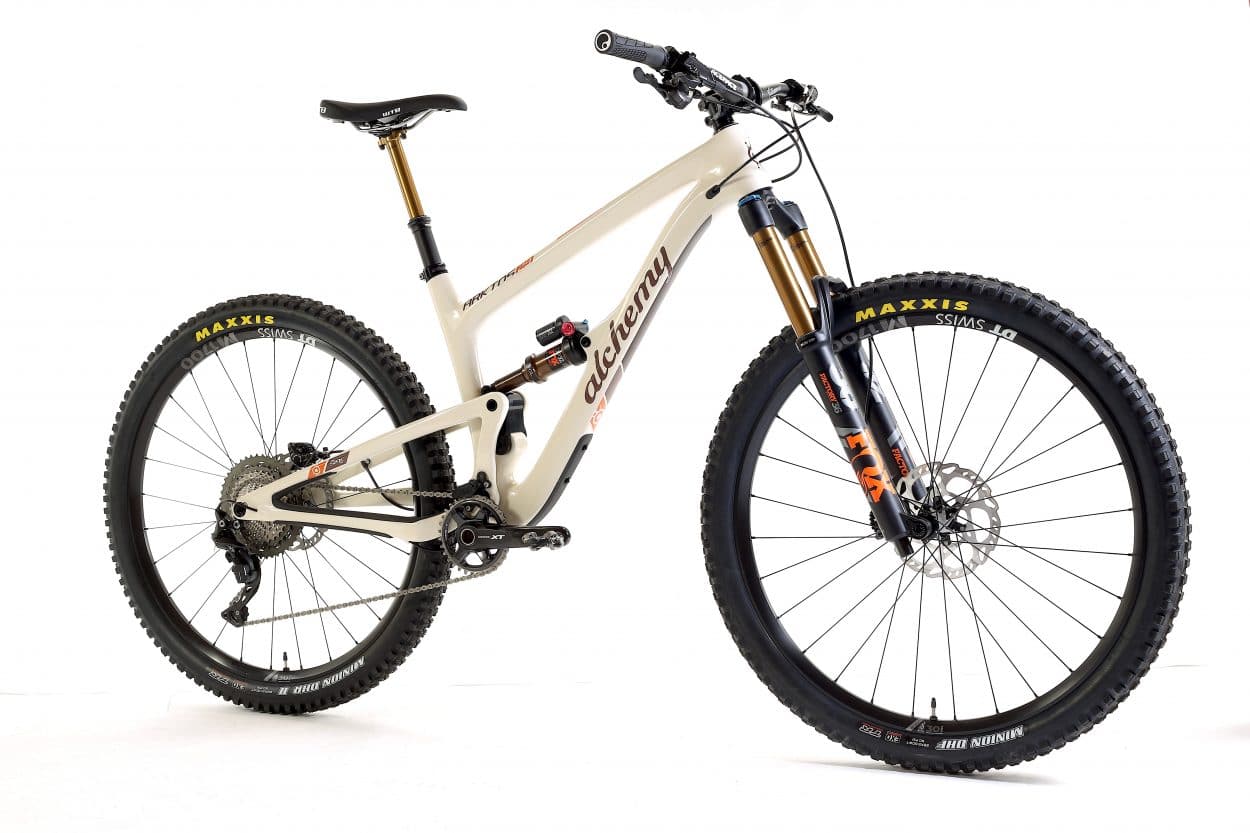 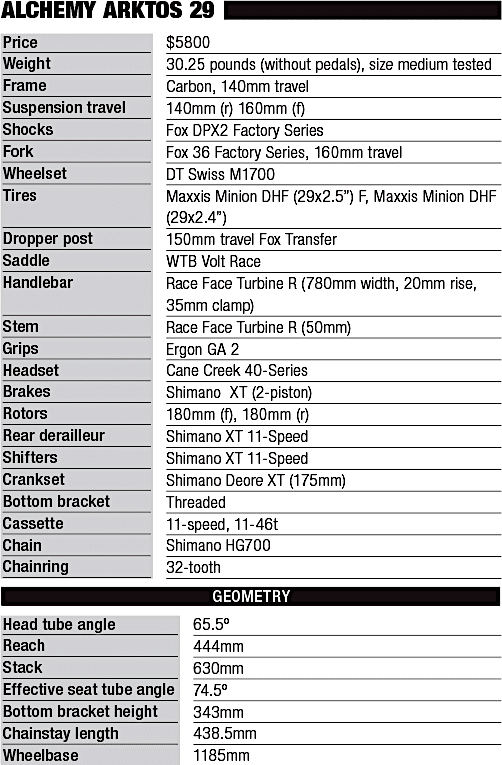 One thing to keep in mind when purchasing an Arktos 29 is that it uses a Super Boost rear hub. This shouldn’t be an issue in the aftermarket when it comes to buying new parts, but riders looking to score a set of used wheels might have trouble locating a set with the right axle spacing. This is really only an issue if you’re purchasing a frame only or want to upgrade the wheels later down the road.

The wheels that came with our build kit weren’t top of the line but held up to our abusive testing. A set of stiff carbon wheels would amplify the snappiness of the Arktos’ handling, but it’s not a necessary upgrade unless you have cash burning a hole in your pocket.

The overall build leaves little to be desired, and if you want more, simply opt for the next model up in the line. With that said, our XT build offered a great all-around package with top-notch suspension, quality shifting and one of the industry’s most reliable dropper posts.

The Alchemy Arktos is far from an entry-level bike, and in fact, it would be overkill for many entry-level riders. This bike was built with passion for riders who are passionate about riding. It’s an elite-level machine packed with performance and proudly touts the fact that it is made in the USA. If an enduro-capable bike with the ability to climb and slay descents is on your short list, check out this offering from Alchemy.