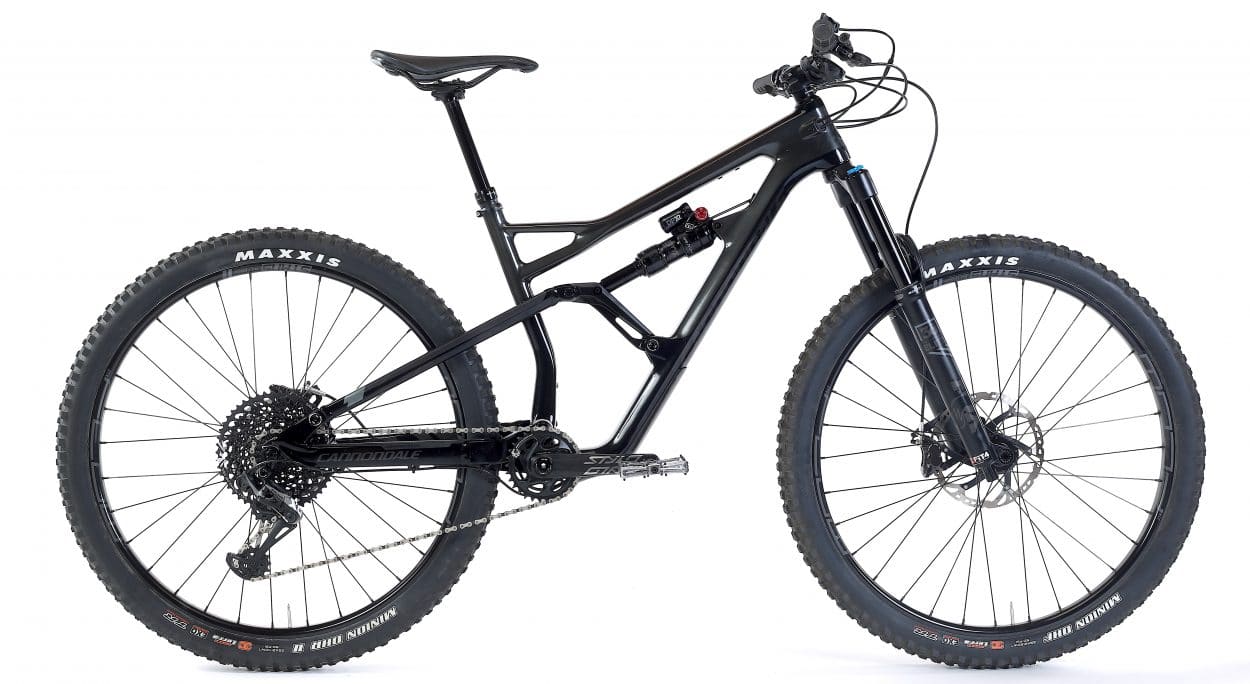 The Jekyll went through changes in 2017 when Cannondale ditched its proprietary Lefty fork and DYAD Pull-Shock in exchange for a Fox fork and a more conventional-style shock known as the Gemini. Earlier versions of the newly designed Jekyll only came in a 27.5-inch trim, and you better believe we put it through our thrash test. In fact, that review can be found in our February 2018 issue. The 29er option first appeared during the 2018 EWS season with American racer Marco Osborne, who joined Transition for the 2019 season, behind the controls. The Jekyll 29 builds off the technologies designed for the smaller-wheeled option while mixing up its geometry to better mesh with taller-wheeled ones. The MBA wrecking crew members put their hardhats on, punched the clock and went to work thrash testing Cannondale’s Jekyll 29 -2-. 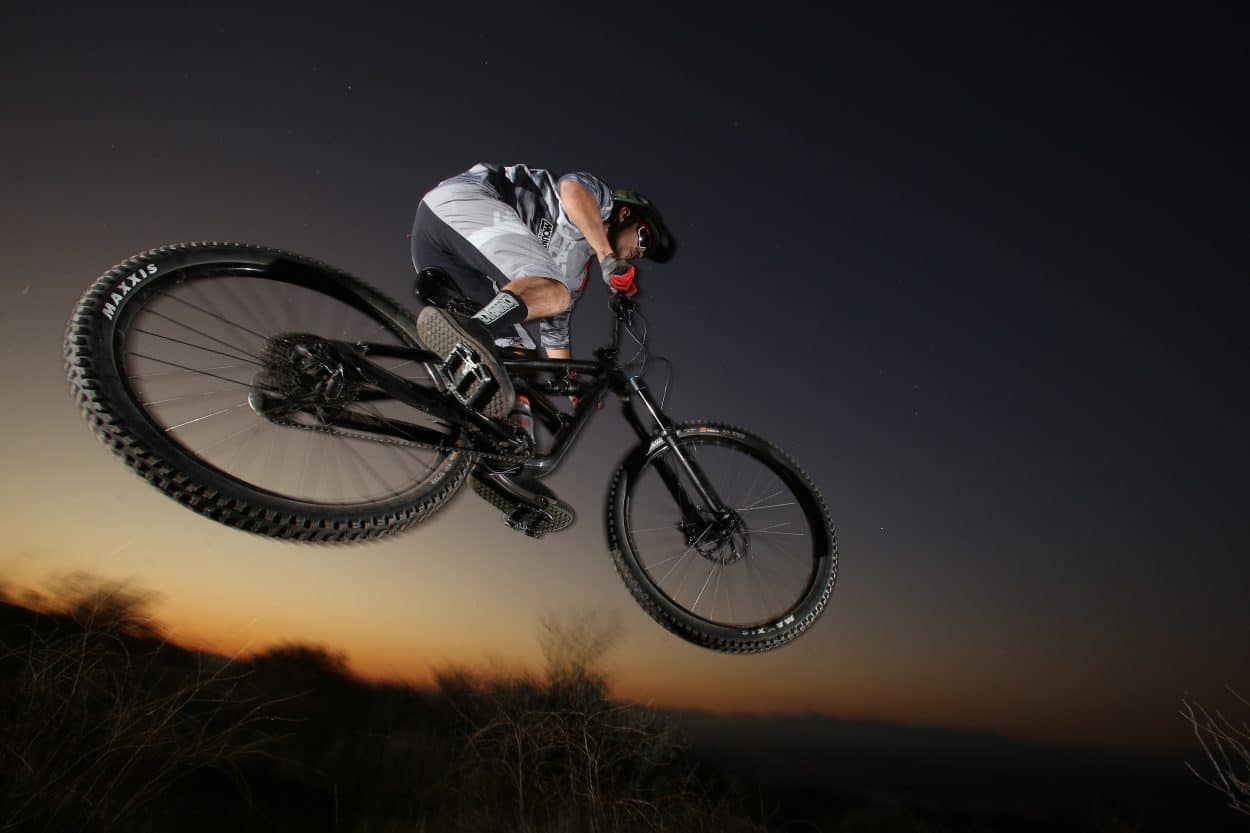 Cannondale introduced the Jekyll 29 in three models, ranging in price from $4000 to $6850. Our test rig sat right in the middle with a retail price of $5550. The Jekyll falls under the enduro category in Cannonade’s lineup but offers 20mm less travel than the 27.5-inch model. Considering that many bikes in the long-travel 29er category run forks as long as 170mm, one could argue that this bike is more trail than enduro. With that said, we were curious to see how the Jekyll’s 150mm of travel and taller 29-inch wheels would perform in comparison to the previous Jekyll we tested. 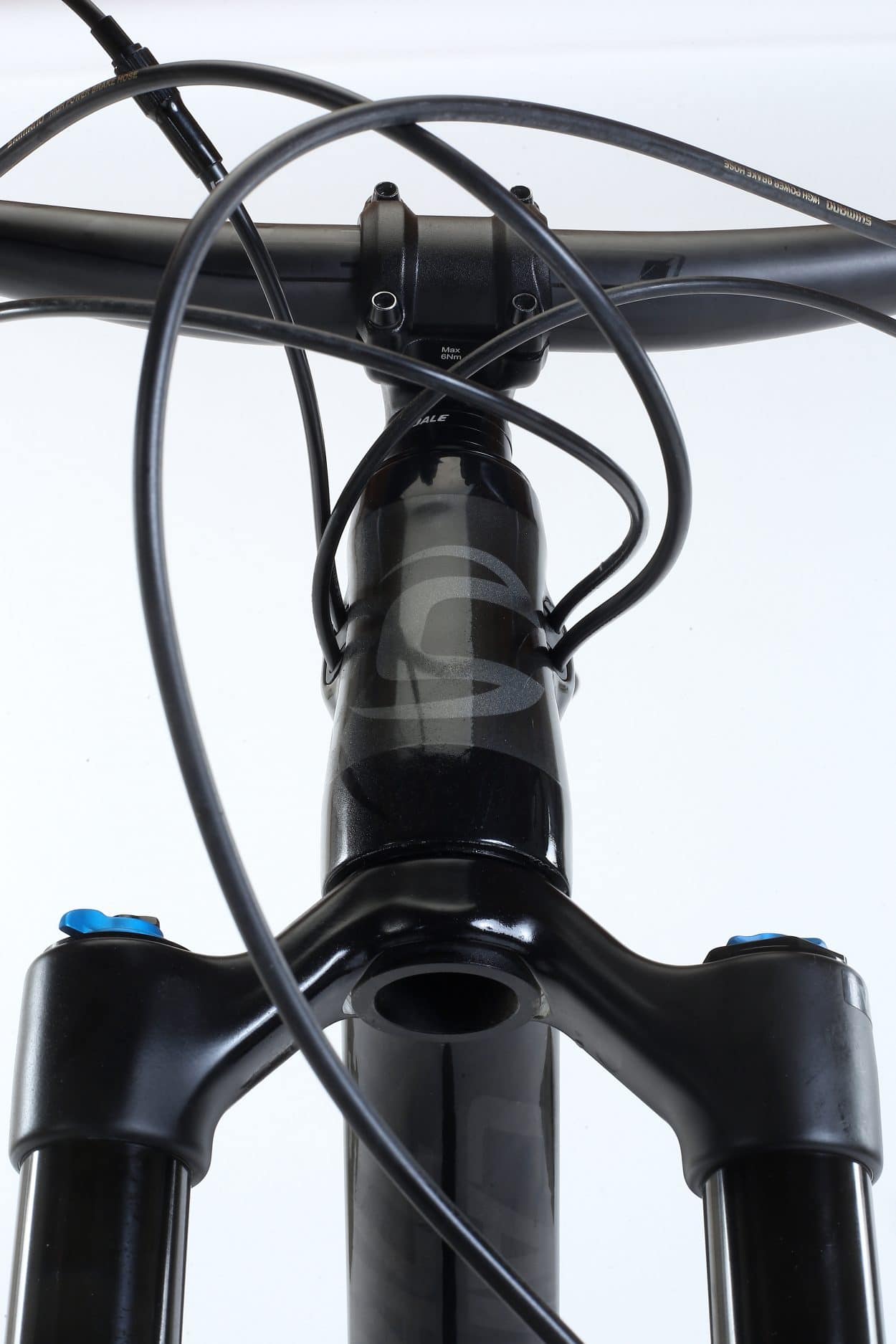 Constructed from Cannondale’s BallisTec carbon and SmartForm C1 aluminum, the Jekyll features a carbon front triangle paired with an aluminum swingarm. The geometry was slightly altered, including a reduced reach measurement and longer chainstays over the 27.5-inch model—although the 29er continues to utilize the same head tube and seat tube angles. Additionally, the Jekyll offers a Press-Fit bottom bracket, internal cable routing and Cannonade’s Ai offset drivetrain. A carbon plate helps protect the frame, and the ISCG05 tab allows riders to run a chainguide or heavy-duty bash guard if necessary. 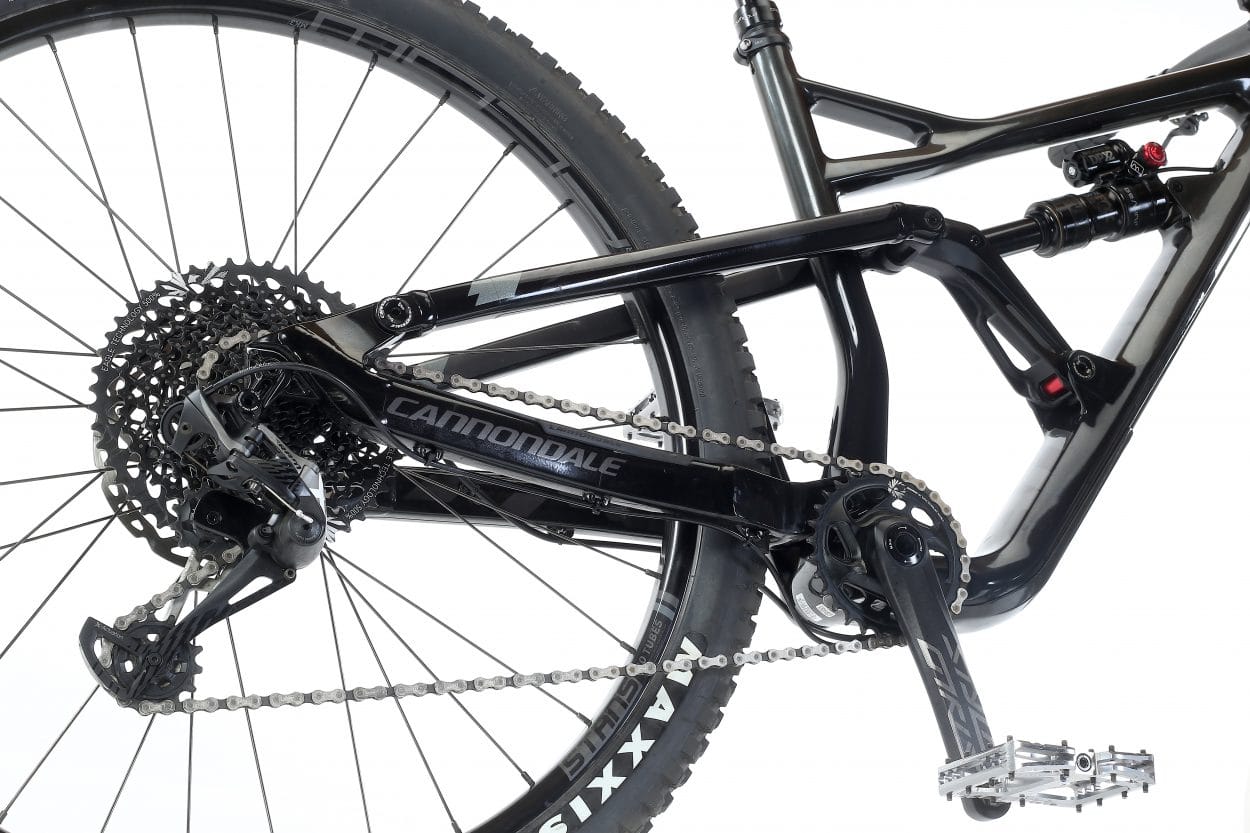 The heart of the Jekyll is its Gemini air shock that allows riders to easily switch between Hustle and Flow modes thanks to a handlebar-mounted lever. This switch is not to be confused with a lockout. To be honest, it’s much more useful than one. The Hustle mode reduces air volume, stiffening the shock’s damping and reducing travel to 120mm. Meanwhile, Flow mode opens up the shock to make the 150mm of travel available for technical descents. 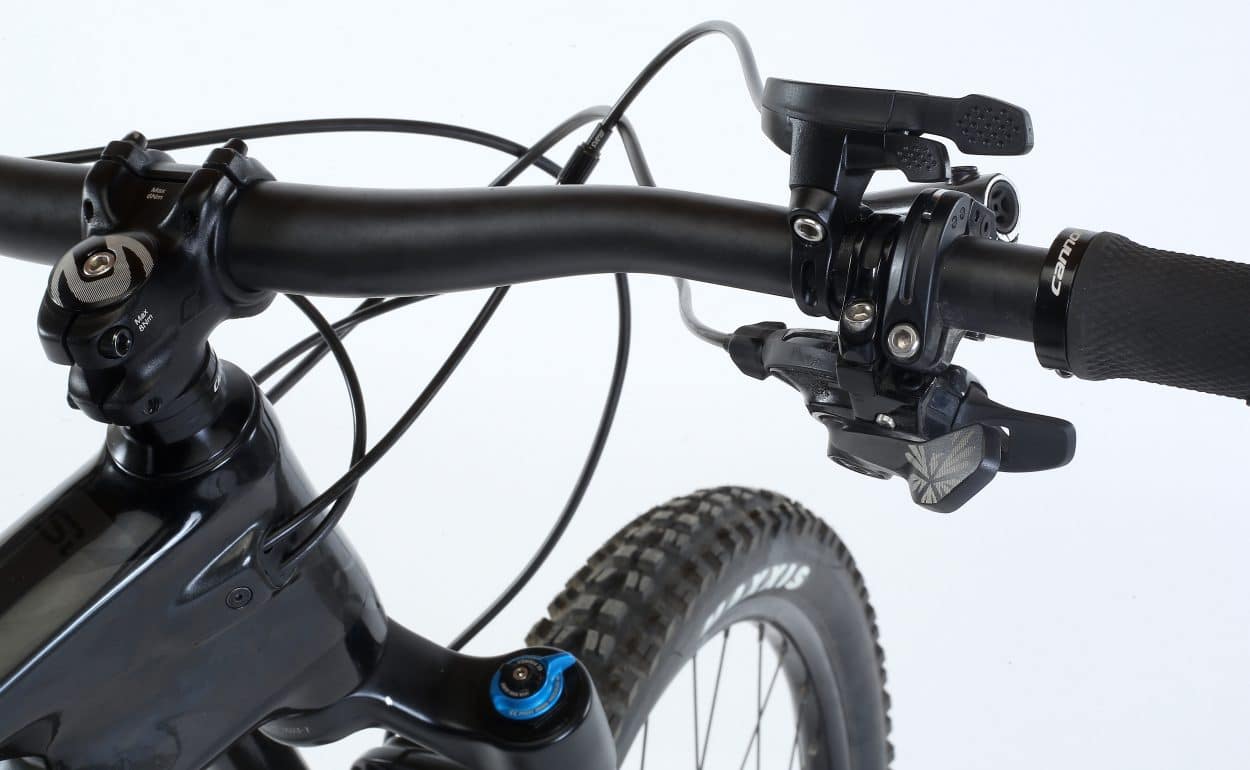 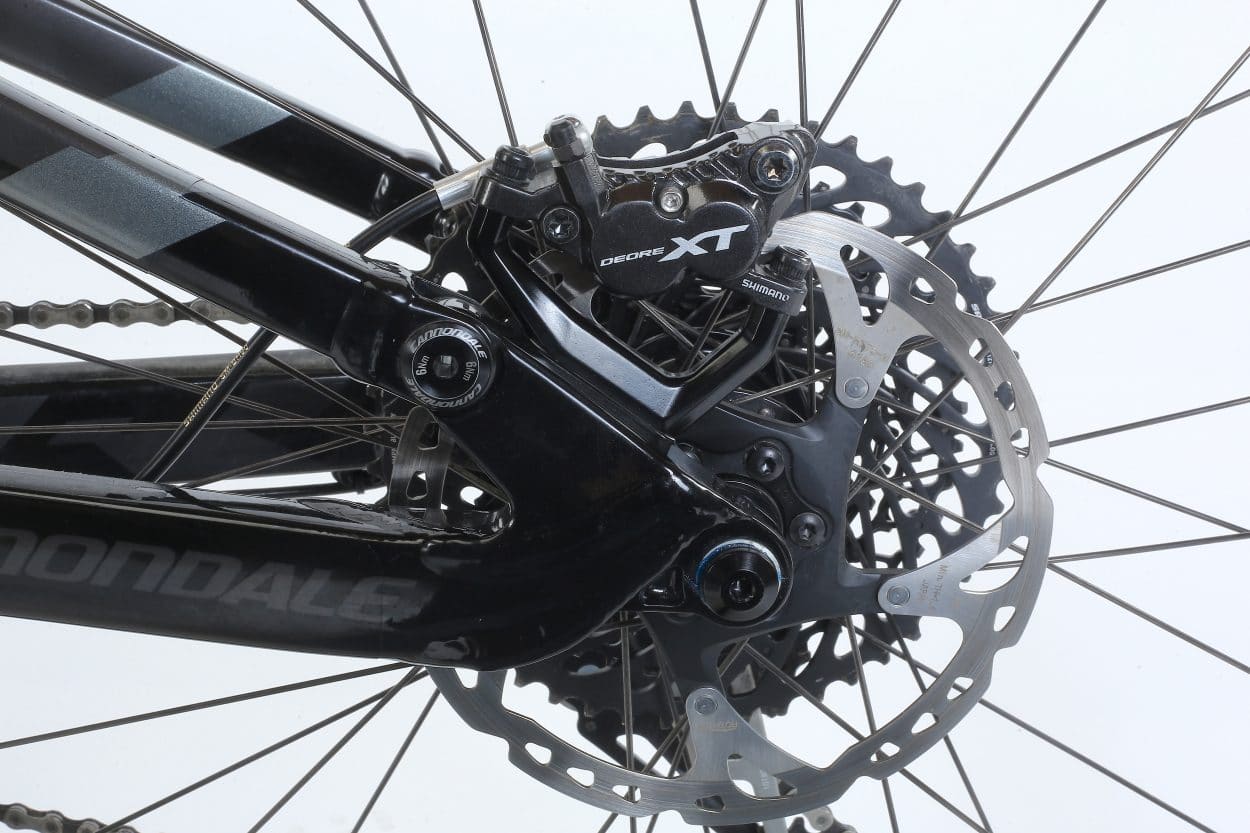 Other standout components include a Fox 36 fork with a 42mm offset, an Eagle drivetrain and a pair of four-piston XT brakes. The cockpit features a short 35mm stem and 780mm-wide handlebars. Last but not least is Cannonade’s new house-brand DownLow dropper post offering 100–150mm of travel, depending on frame size.

Setting sag: We set our ride with 25-percent sag up front and 30 percent in the rear. We followed our fork’s tuning guide for our initial setup, but later found the need to go a few clicks faster with our rebound to help balance the front end. Our shock, set with 30-percent sag, felt right on the money when our bike was in Flow mode. In Hustle mode, the reduced air volume gave the shock a stiffer feel, which was great for climbing but made the front end feel too soft on flat trails. This can be tuned out by adjusting the compression dial on the fork.

Our test riders welcomed Cannondale’s decision to ditch its proprietary suspension components for more conventional ones. What this means for the consumer is less time tinkering and more time shredding.

Moving out: Once we tossed a leg over the Jekyll 29 -2-, we noticed the reach felt just a hair shorter than on the 27.5-inch model. After checking the numbers, our suspicions proved to be true. Cannondale reduced the reach by a mere 7mm. While we were comparing numbers, we also noticed the chainstay length grew by a more noticeable 22mm. This was a welcome change that helped give our bike stability when the trails sped up. Another noticeable change was a slightly taller bottom bracket due to the 29-inch wheels. Riders who frequent rocky terrain will enjoy the additional pedal clearance.

Climbing: Many of our test riders rant against remote switches since they add additional cables to the handlebars and clutter up the overall look of a bike. Cannondale’s Hustle/Flow system does just that but comes in handy more times than not. During climbs, we placed the Jekyll in Hustle mode and found that setting quickly added pedaling efficiency while remaining active during technical ascents. This is achieved by closing off one of two air chambers in the shock, making it impossible to fully compress the suspension past 120mm of travel. Our testers found the stiffer-feeling shock caused their fork to sag more. This further improved climbing efficiency by giving the front end a more planted feel when the trails got steep. 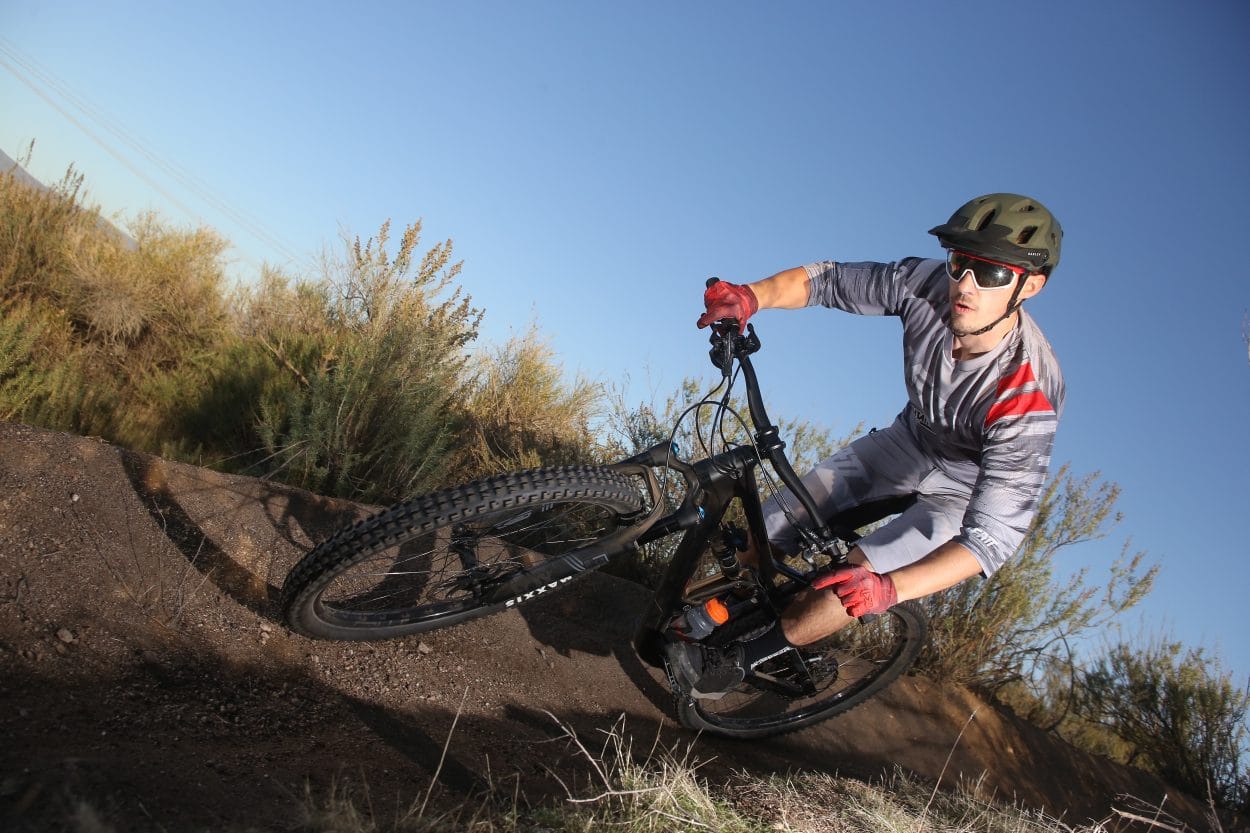 Cornering: Cannondale paired the Jekyll with a slack, 65mm head tube angle and a 42mm offset fork to aid in cornering performance. In some cases, a bike with a super-slack front end can feel as if the front wheel flops in corners. Cannondale addressed this issue with the 42mm offset fork, allowing the Jekyll to be pointed down the trail with precision and control. Most riders will have a hard time noticing the effect of the offset, since cornering performance is affected by the entire bike’s design and not just one factor.

Furthermore, the Jekyll uses a thru-axle pivot system, providing stiffness between the main frame and the swingarm. The chainstays, although longer than those on the 27.5-inch model, offer a snappy feel in tight turns. With all that said, our testers were pleased with the Jekyll’s ability to dice up the trails. 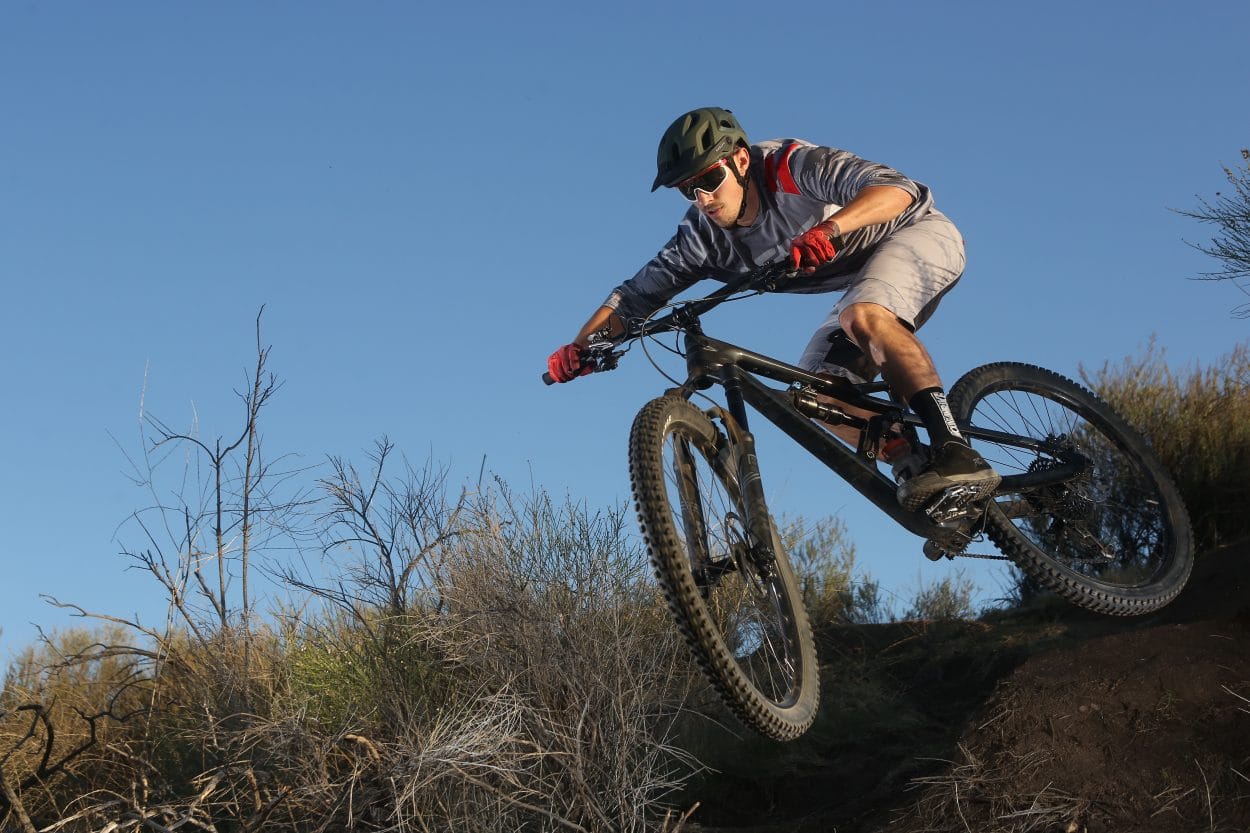 Descending: The idea behind Cannondale’s Hustle/Flow mode was to create a suspension system that could climb and descend without compromise. Once the Jekyll is placed in Flow mode, this wild beast is ready to charge. The Jekyll is not one for picking lines; instead, it runs straight down the trail, jumping over everything in its path. In a way, this bike surprised us, as it felt nearly as comfortable on descents as some other long-travel 29ers with additional travel. The Jekyll is a point-and-shoot bike that will make the toughest trails a little more mellow. 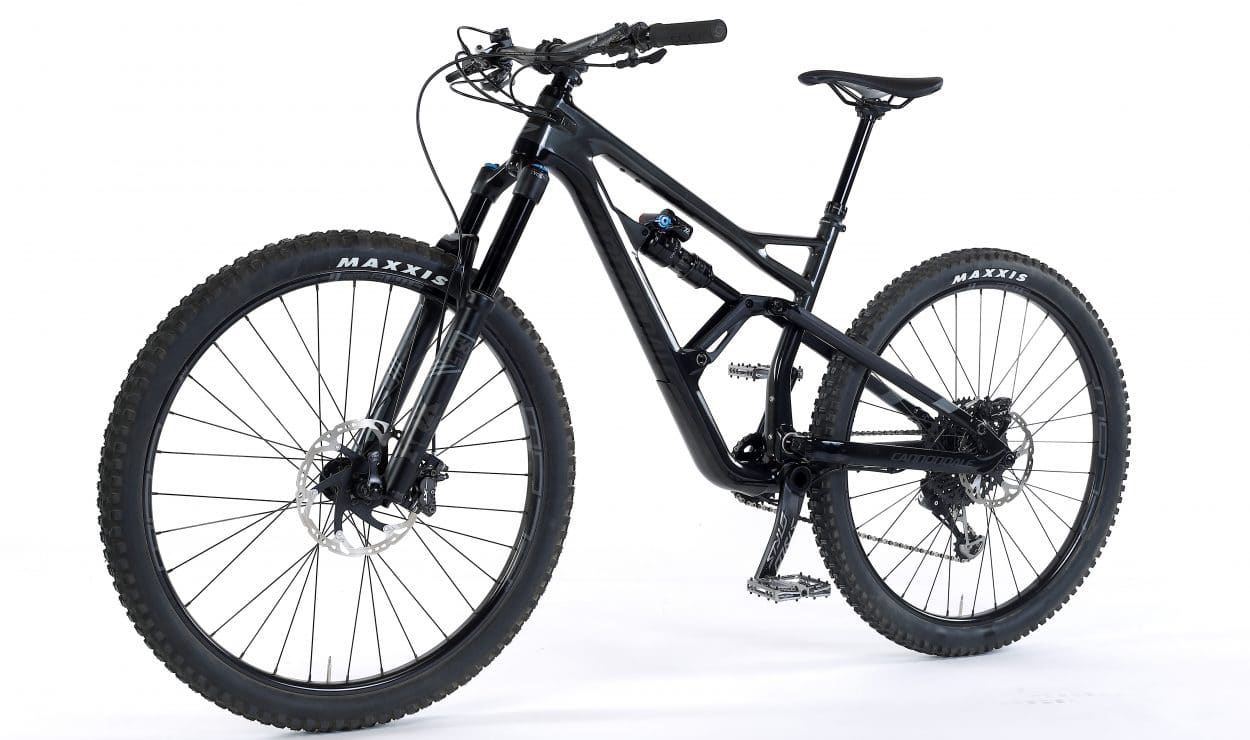 Throughout our testing we never experienced a harsh bottom-out abroad the Jekyll, which led us to test just how much more sag we could get away with. We experimented with 35-percent sag, which gave the bike a more balanced feel in Hustle mode but felt too plush in the open Flow setting. After a few rides, we returned to 30-percent sag for the remainder of our time with this bike.

As far as upgrades go, we couldn’t find much worth spending money on. Cannondale’s dropper-post remote offered a great feel. The Maxxis tires held up well, and the cockpit felt dialed. A tubeless setup is always a solid upgrade, but short of that, the Jekyll is ready to rip right out of the box.

The Jekyll 29 is labeled as an enduro bike, and while this machine is highly capable of ripping up gnarly courses, we believe this bike is better suited to the trail category. It climbs well, even when considering its heftier weight. This has a lot to do with Cannondale’s Hustle/Flow switch. While we aren’t the biggest fans of adding remote levers, Cannondale managed to remove the compromises between climbing and descending. If a big-wheeled shredder is on your wish list, give the new Jekyll 29 a try. 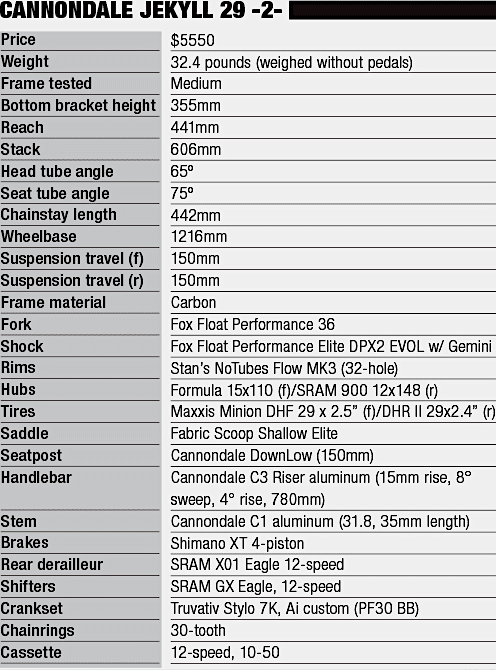 Your One Ticket to Ride 20 European Bike Parks