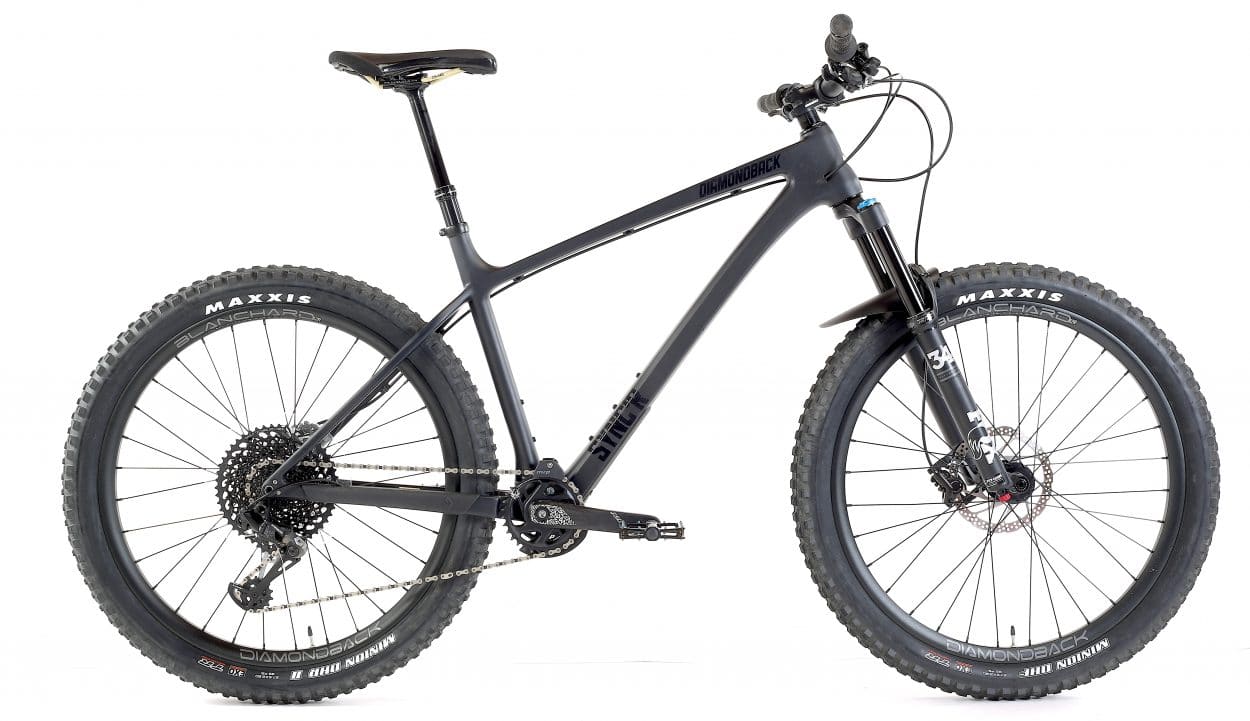 Diamondback’s roots can be traced to BMX, dating way back to the late 1970s. So, it seems only appropriate that Diamondback would have a high-end aggressive hardtail in its line. There has been a considerable amount of effort and there have been a number of upgrades put into this bike by Eric Porter and the design crew. The Sync’r model has been in the Diamondback lineup for years, but only aluminum models with steeper geometry, a shorter top tube and less travel were available. 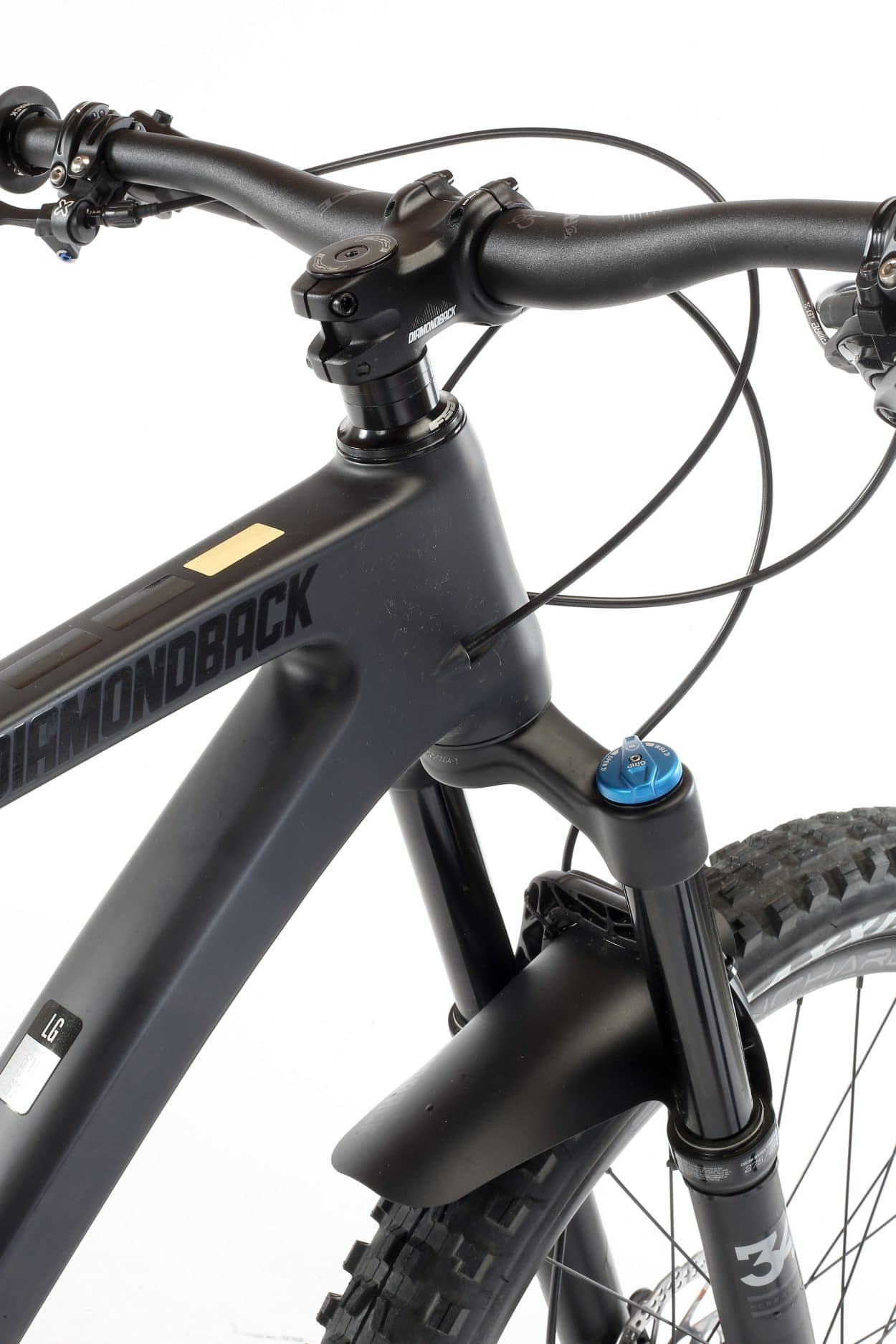 The Sync’r is a progressive-geometry, carbon, monocoque hardtail that is able to run 27.5+ or 29-inch wheels. The frame features boost spacing to increase stiffness and a tapered 66-degree head tube. The derailleur cable and dropper post are internally routed, while the rear brake hose resides on the outside, allowing easy access for brake service. The Sync’r comes with a stock MRP chain guide connected to its 1X drivetrain, so there is no front derailleur mount, telling us that front shifting is a thing of the past. Frame clearance is limited to the stock 32-tooth chainring. The rear end of the bike is lean yet still roomy enough for mud to clear with the stock 27.5 × 2.8-inch tires.

The Sync’r comes with a 140mm Fox 34 Float Performance fork, SRAM GX Eagle drivetrain and Descendant 6K crank. The Shimano Deore MT-500 brakes were a disappointment, which is highly unusual for this typically trusted braking system. The modulation was poor. The brakes lacked bite, and they had a very gritty feel to them. 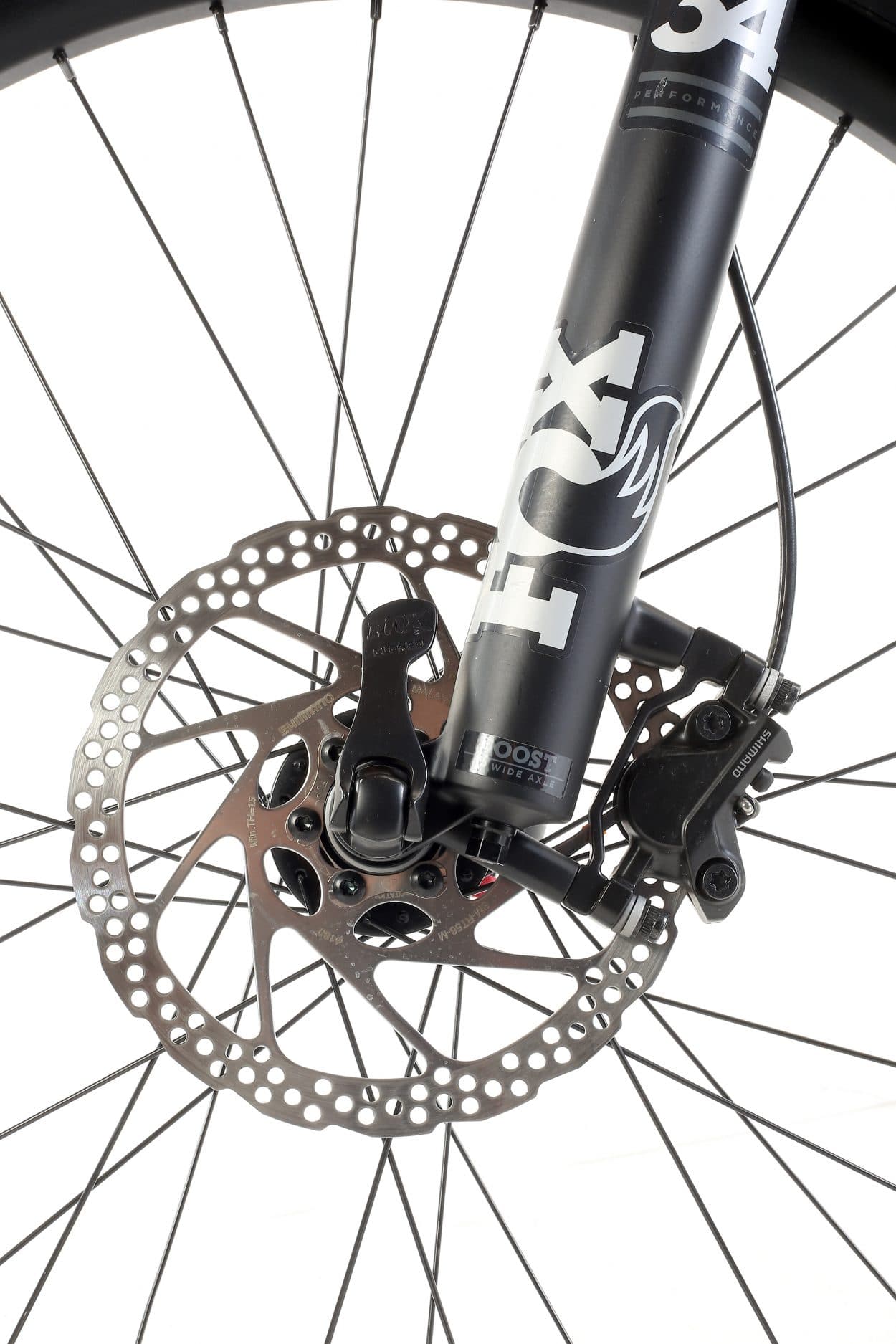 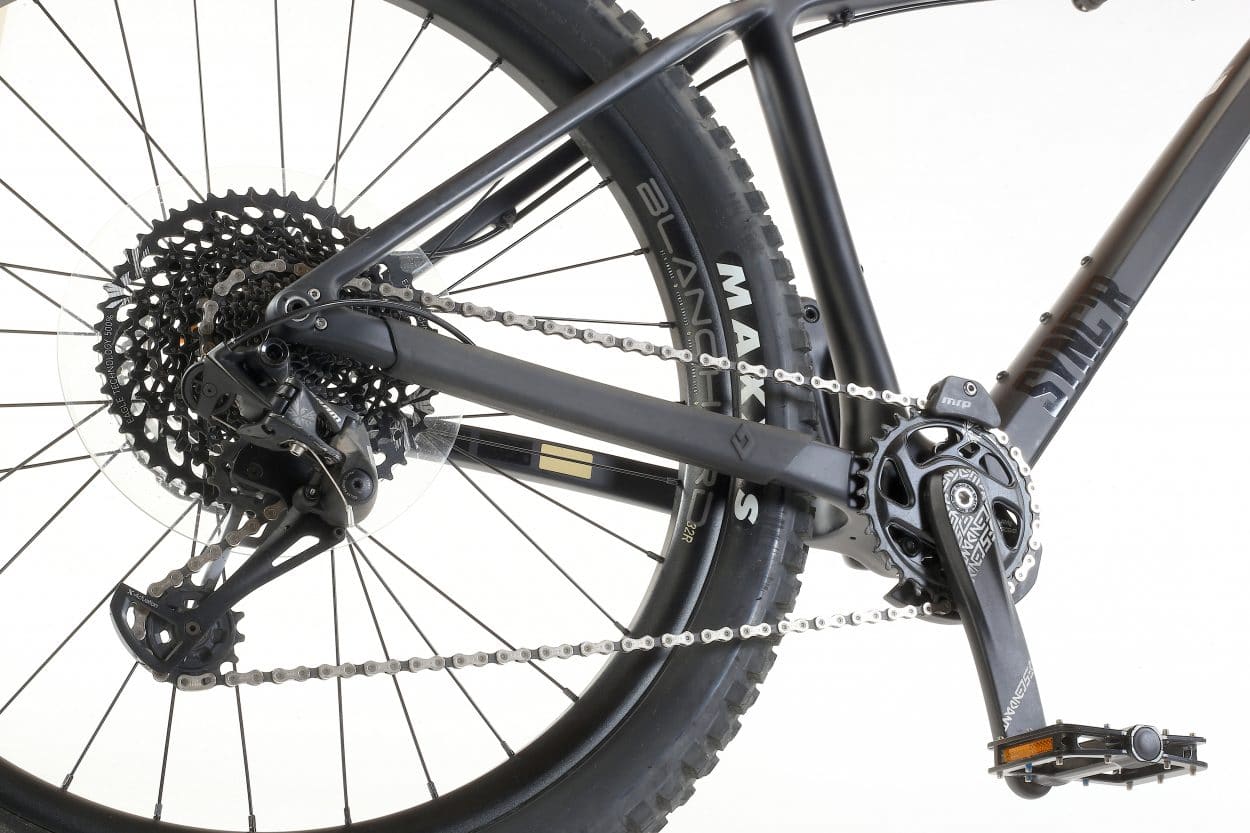 The Fox 34 Float Performance fork handled everything we threw at it with the typical stock settings. We set the sag at just under an inch on the 140mm (5.5-inch) stanchions, which is about 20 percent, keeping with the theme of the aggressive bike park mentality. We ran the rebound a little faster than normal at 17 clicks from slow to make it more responsive. 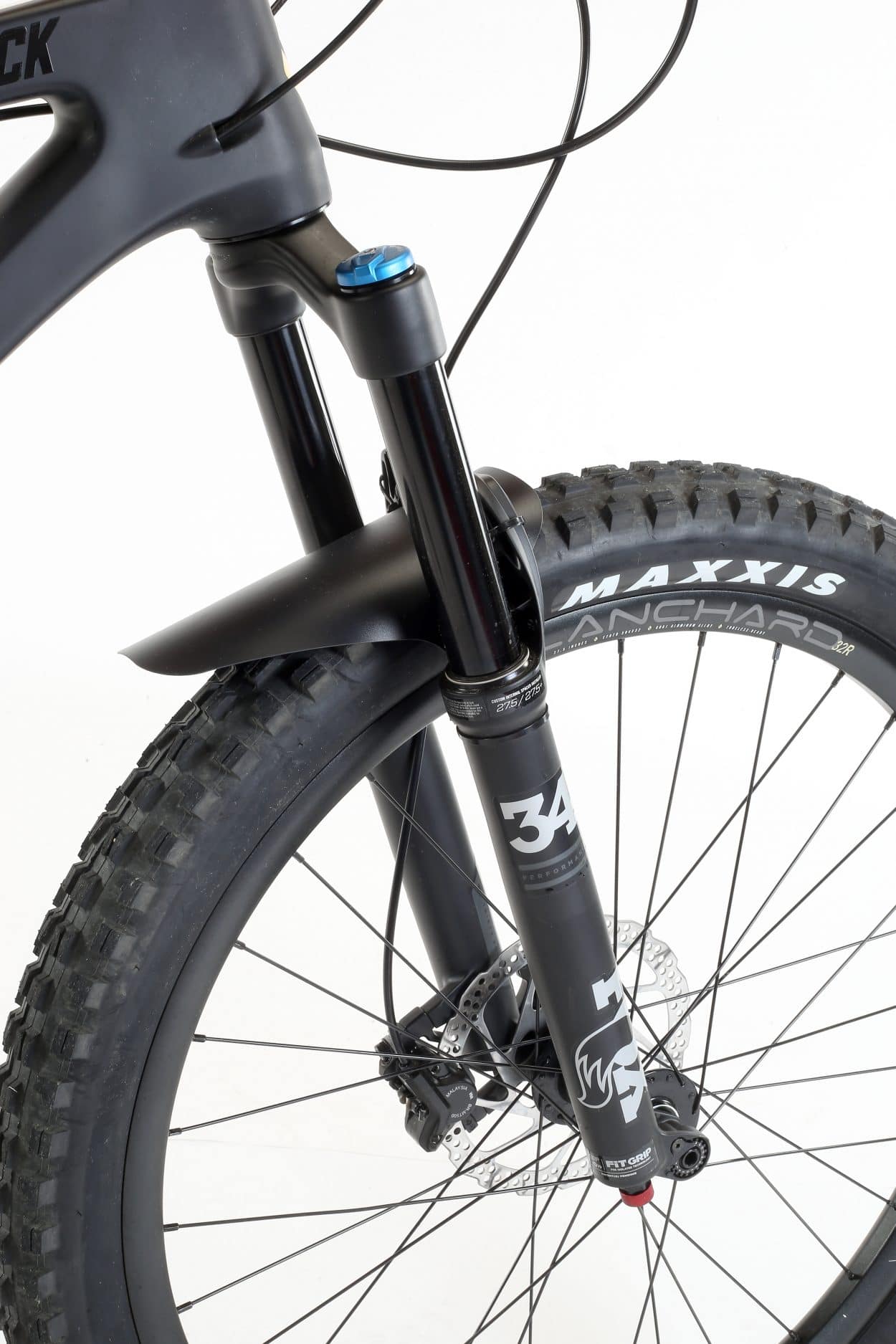 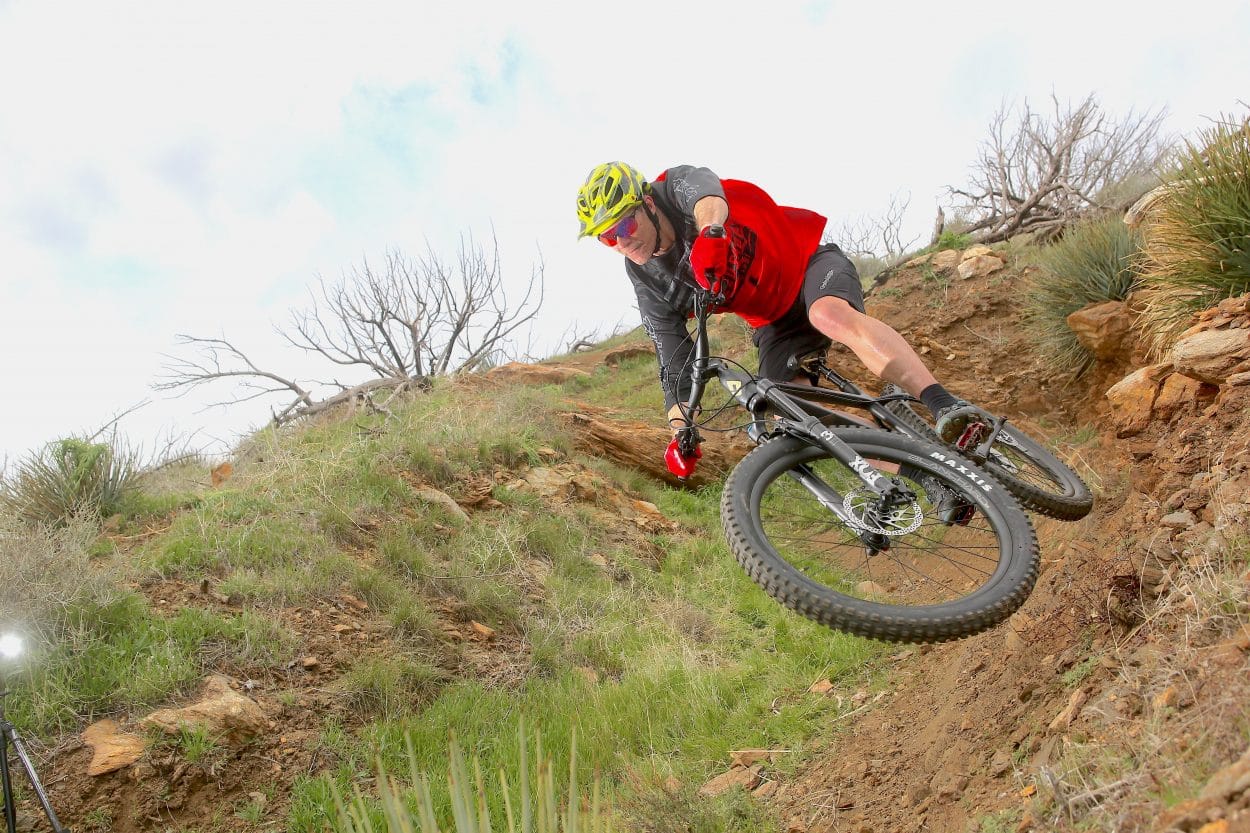 The best summation of the Diamondback Sync’r came from one of our test riders, Todd Snider: “If you could only have one bike on a rack behind your motorhome, this could be it.” You can climb, ride to the store, jump at the bike park, roll fast on cross-country trails and bomb down aggressive singletrack—all on a relatively inexpensive bike. This is a simple mountain bike that you can take anywhere and ride with confidence. Having the big 2.8-inch tires eliminates the harsh feeling that a traditional hardtail normally delivers. The top tube has an unusually high standover for a bike with such a dirt-jumping pedigree, but it didn’t give us any trouble. We had some early setup issues with the derailleur hanger bending on a fire-road climb and the seat coming loose on the dropper post rails, but the issues were not reoccurring. Diamondback sells this bike direct to the consumer and ships it “mostly assembled.” Diamondback claims, “Anyone can build their new bike,” but based on experience, we recommend that you take it to a bike shop to ensure proper assembly. 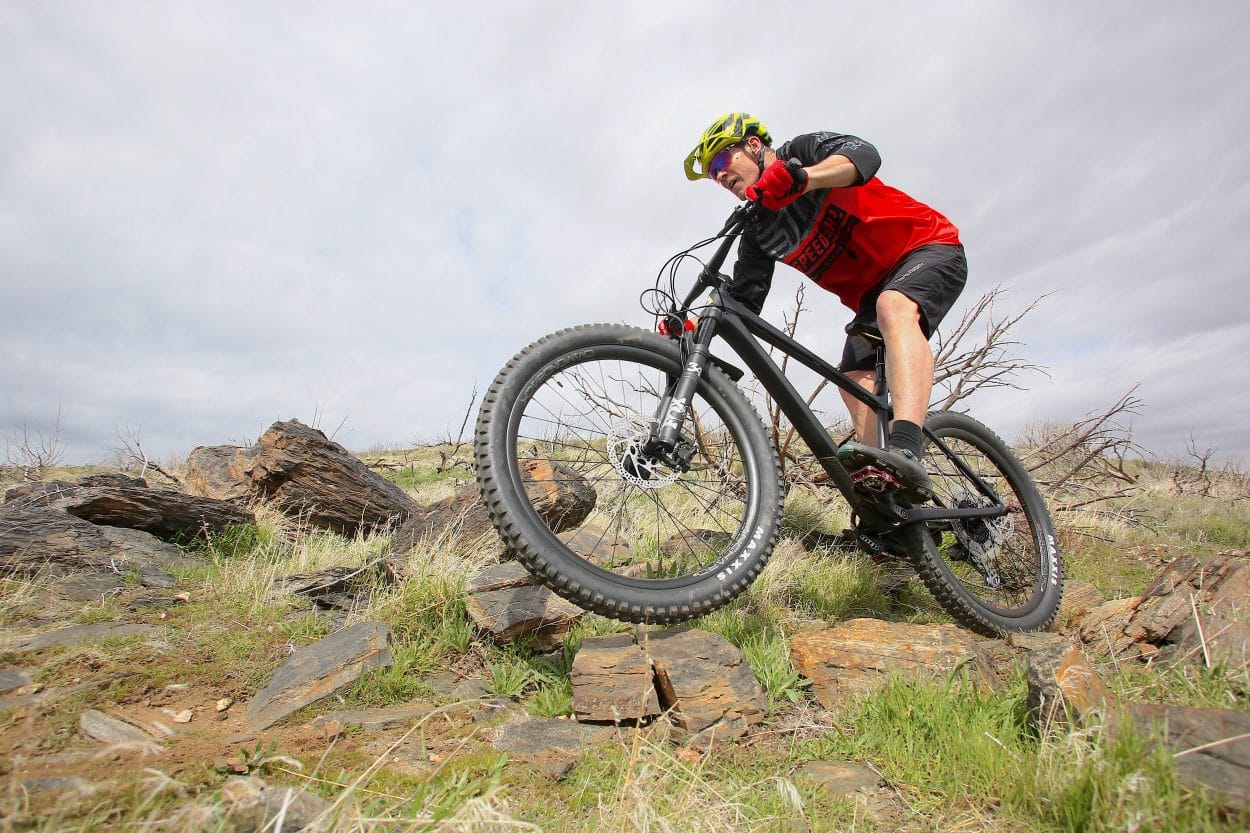 Climbing: The Sync’r wasn’t designed to be a cross-country bike, but it actually is a reasonable climber. The positioning didn’t feel cramped due to the progressive, longer top tube. The head angle isn’t too slack, enabling you to climb up steep, tight switchbacks. Having a 150mm dropper post worked well for getting the seat out of the way, and there was plenty of seatpost to go up to 180mm for taller riders. We give thanks every day for the 50-tooth SRAM cassette for the extra range it gives our gear ratio and how it has simplified shifting. 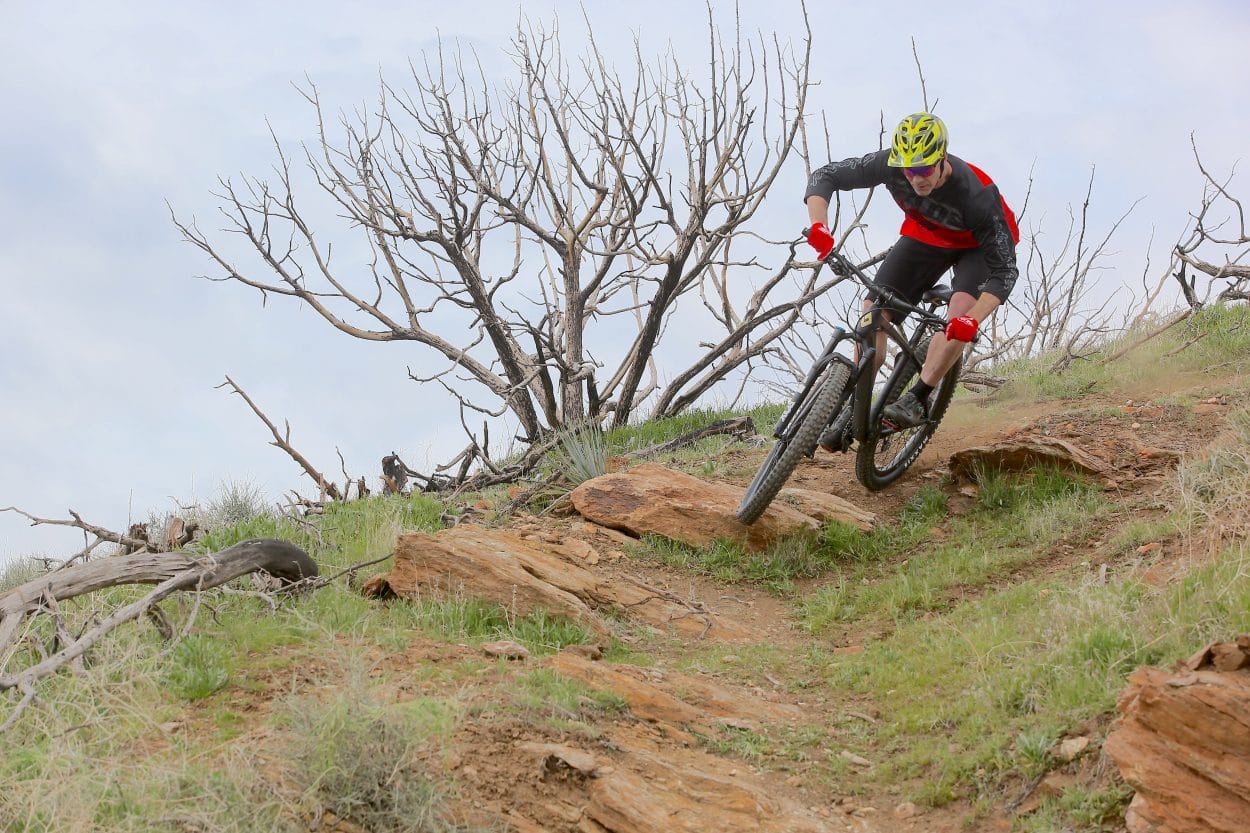 The flow: This is where the Sync’r stands out. Handling was very controlled. With the big-volume tires, we had the false sense of riding a dual-suspension bike on smaller obstacles and washboard bumps. Then, when we least expected it, the bigger features reminded us that we were indeed riding a hardtail. The carbon frame flexes and makes the ride compliant but not too “noodley.” It offers a much better feel than the traditional aluminum typically used for this category. The Sync’r flows well and corners with precision. The head angle and travel make the bike feel stable in the air. It doesn’t feel like a slopestyle bike, but when you do hit bigger features there are no surprises, and it is more than capable of floating over huge gaps. 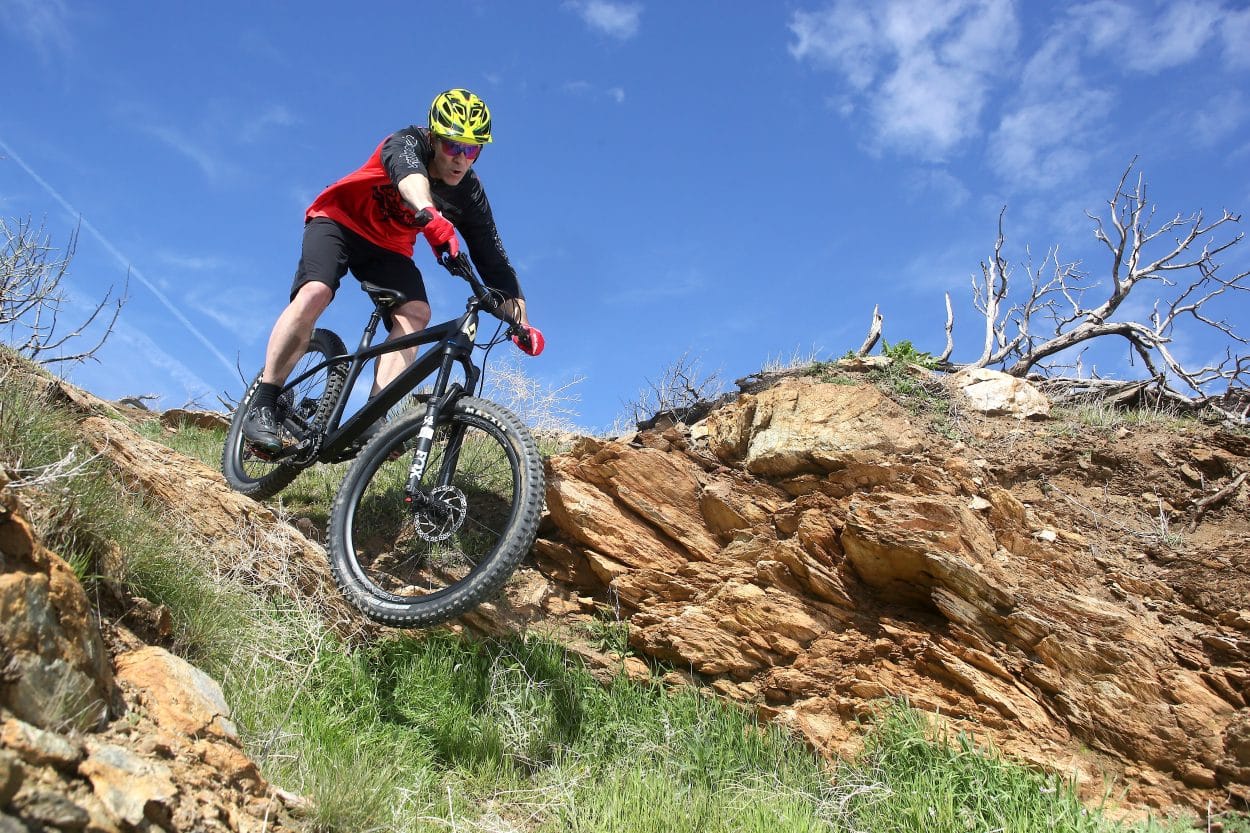 Since we tested a size large, our upgrades are based on our 6-foot-tall rider’s experience. We always advocate for more volume spacers in the fork for more aggressive and bigger riders, along with a longer dropper post. Droppers are really beneficial, especially if your main ambition is to jump. The more tucked away you can get your saddle the better. Speaking of saddles, if you plan to ride for more than an hour at a time, find a saddle that will accommodate you better than the one that comes stock on the Sync’r. Many stock bars now come in an 800mm width. The stock 780mm bars on the Sync’r felt good, but 800mm bars might feel even better. 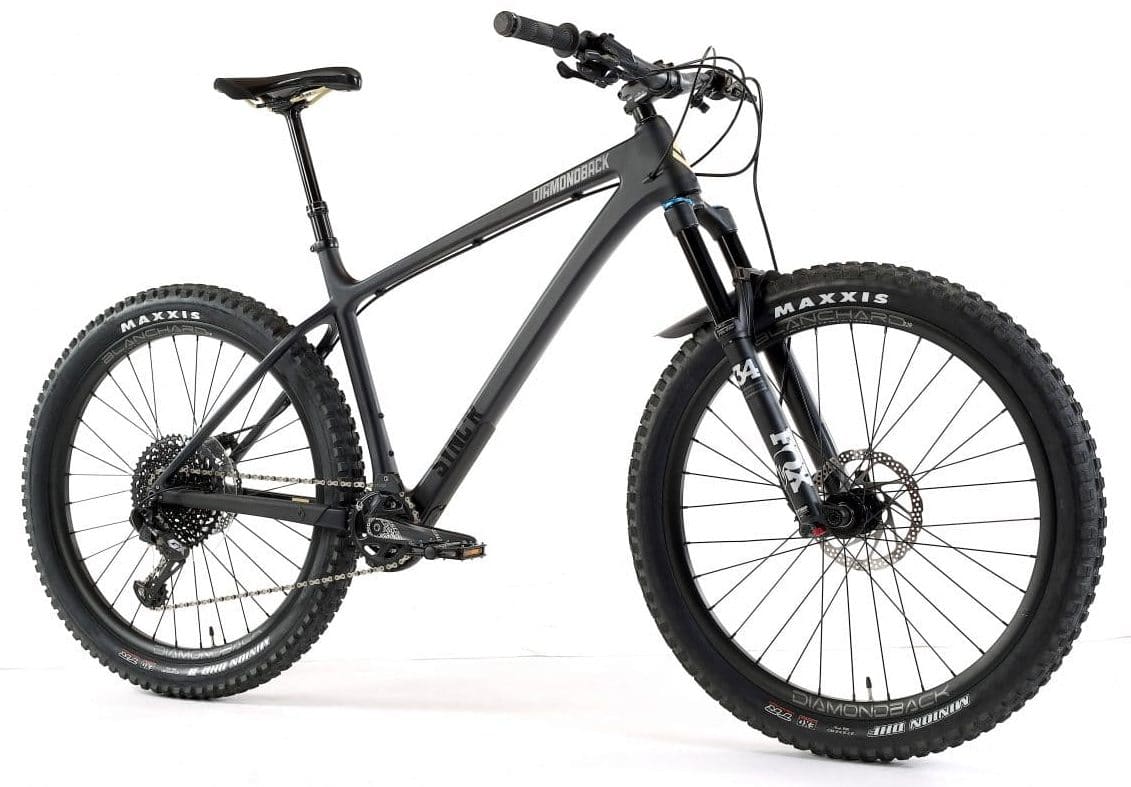 This bike is a Swiss army knife of sorts that is capable of riding up the trail and bombing back down. The Sync’r might not be the most efficient cross-country race bike on the market, but if your trail system isn’t extremely rocky or steep, this might be your ride. Ideally designed for groomed, flowing trails at resorts and bike parks, it’s perfect for the rider who pulls up on every little obstacle and feature available. Carving through berms, pulling manuals and being in the air is where the Sync’r is most at home. 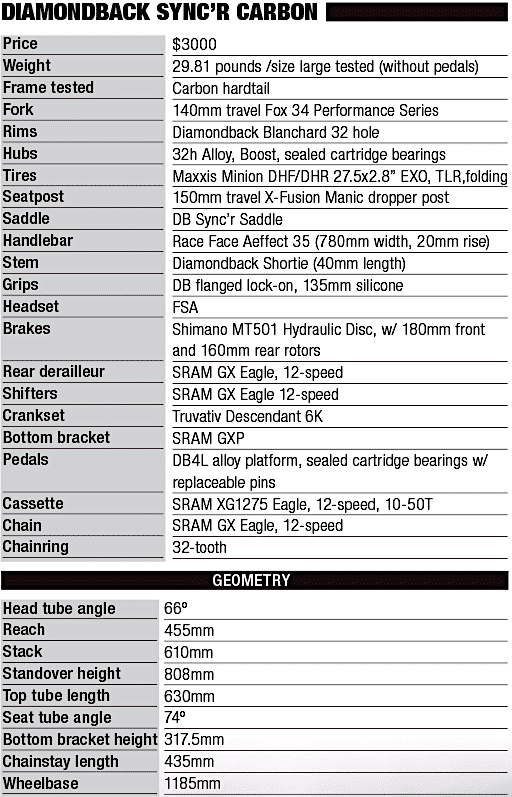 Watch: There’s a Reason why Bend, Oregon, Is Home To Some of the Best Mountain Bikers