Brent Foes is the man behind Foes mountain bikes, plain and simple. If you’ve ridden a bike park in the last 15 years, you’ve inevitably seen one of his machines. We say his machines because Brent welds each and every Foes that leaves the building. Think about that for a second—every single Foes bike you’ve ever seen has been touched by Brent’s master-craftsman hands and carefully built with the light of his welding torch. There’s no other brand we know of that builds their bikes this way, and that’s why we’re so enamored with Foes. A typical long-travel enduro bike is made from either carbon fiber or cookie-cutter aluminum fittings that come straight out of Asia and built by people who might as well be building toaster ovens. Foes is a different kind of company, one that takes pride in doing everything from the design to the paint finish and decals right in the good ol’ US of A. We wrestled one of Brent’s FXR creations from him to put it to the trail test. 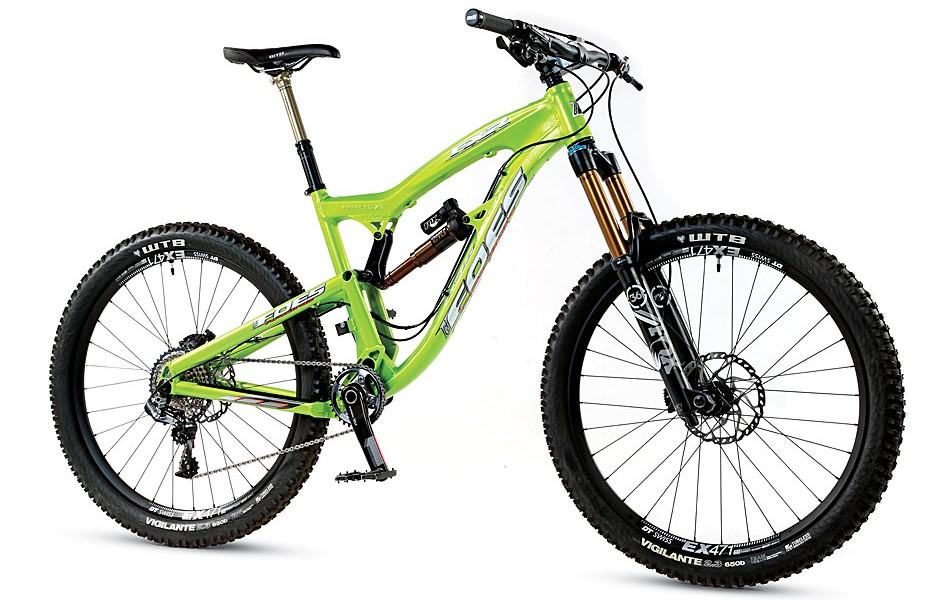 The FXR275 is a big-travel bike that’s built without completely ignoring climbing prowess. The bike is happier shredding steep and gnarly descents, but it will grudgingly climb anything you throw at it as long as you have the fitness and determination to push the pedals.
The bike straddles the line between an enduro race bike and a full-on downhill sled. It’s the longest-travel trailbike Foes makes, but don’t let that keep you from pedaling it uphill. The bike is built with weight savings in mind too.

Foes is a big believer in hand-built aluminum, and that’s exactly what the FXR is constructed from. The processes Foes uses are well-refined; Foes doesn’t build me-too carbon bikes simply because he can build the same bike from custom-shaped, hydroformed aluminum and can make it better than an Asian manufacturer’s plastic bike. 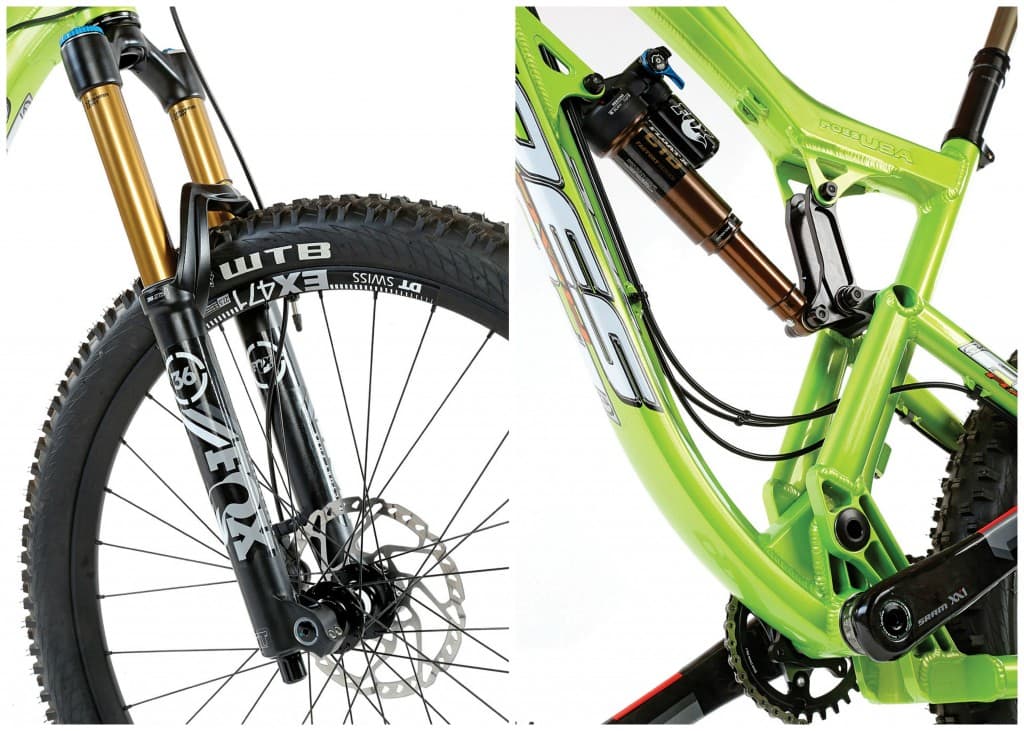 The FXR sports almost 7 inches of travel front and rear and uses a modified single-pivot suspension design. The hydroformed frame also uses a tapered head tube, 12×142-millimeter axle, ISCG-05 mounts and a threaded bottom bracket and rides entirely on cartridge bearings to control the suspension. The bike can be ordered as a frame only or as a complete bike and is available in over 20 color schemes.

The construction quality of any Foes bike is the standout. Everything from the weld quality to the alignment to the finish quality is top-notch. Even our pickiest test riders couldn’t poke holes in Foes’ quality control. Know that if you’re buying a Foes, it’s built for the long haul, and very well could outlast you as a rider. 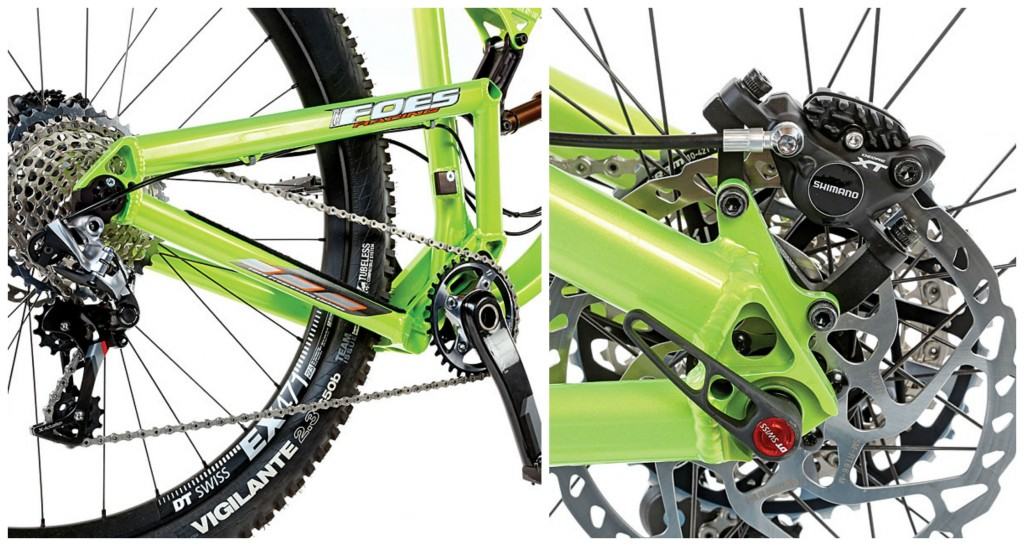 The components are a smart mix of SRAM and Shimano parts that have recently become industry standard. We applaud Foes’ use of Thomson components to finish the build, as these handlebars, stems and seatposts have been a favorite of Mountain Bike Action’s for many years. This build is a stock one that can be ordered from Foes as it’s shown here.

Suspension setup: Foes has a long history of using low-leverage designs to improve the ride quality of its bikes. The FXR is no exception. The idea is to use a shock that has a long enough stroke to support the amount of travel the bike has. The FXR uses a shock with 3 inches of stroke and 7 inches of rear-wheel travel. That amounts to a 2.3-to-1 leverage ratio. That might seem overly technical, but it translates to a shock that’s not overworked and is more consistent on the trail, especially on long descents. Trust us, this little design detail pays big dividends. We set our FXR to 35 percent sag front and rear and hit the trails.
Moving out: The FXR is a big bike, and our size-large test bike fit even our tallest test riders like a glove. Pay attention to the sizing chart, because Foes seems to make its bikes true to size rather than playing the “published weight” game by making a “large” frame that’s actually a medium and claiming a half-pound weight savings. 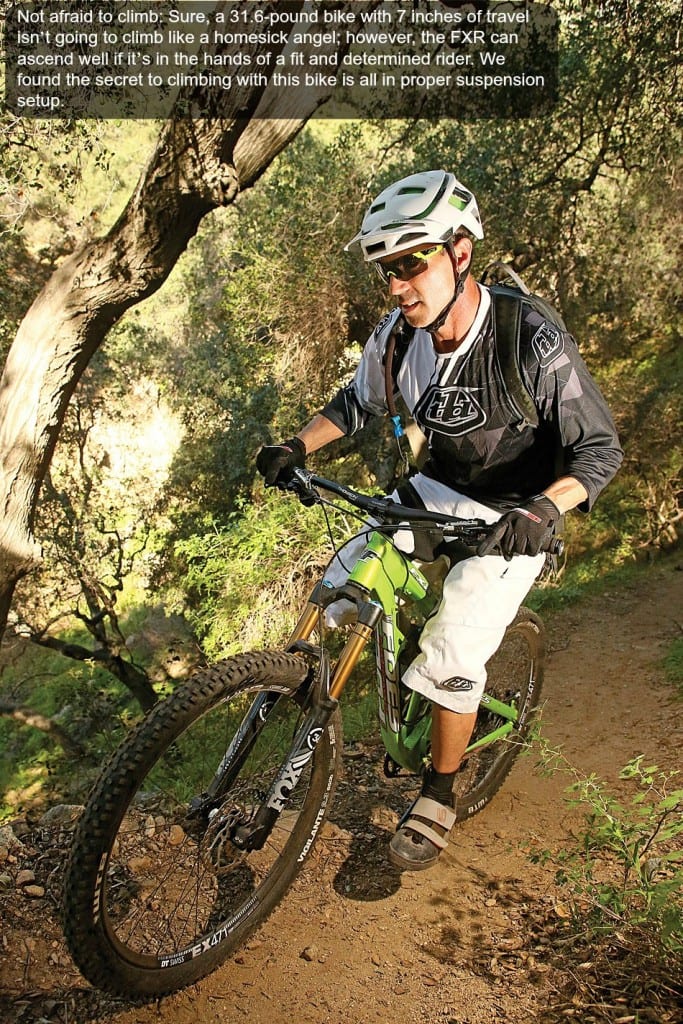 Climbing: The FXR certainly wasn’t designed with climbing as a priority. The bike is happier using a chairlift or shuttle to ascend. That said, however, the bike puts the rider in a fairly aggressive position with a steep seat angle and stretched-out top tube. The bike floats uphill better than any 7-inch-travel bike we’ve been on, and while that’s not saying much, the FXR is no dog when the trail points uphill.
On technical climbs, riders had issues pedaling up rock gardens due to the pedals hitting the rocks. With a long-travel bike like this, it’s important to keep the bike high in the stroke on technical pedaling sections, and, thankfully, that’s exactly what the Float CTD shock delivers. On technical climbs, the Trail mode on the shock does a nice job of keeping the rear wheel active enough to maintain traction while keeping the bike high in its travel to keep from hitting rocks. 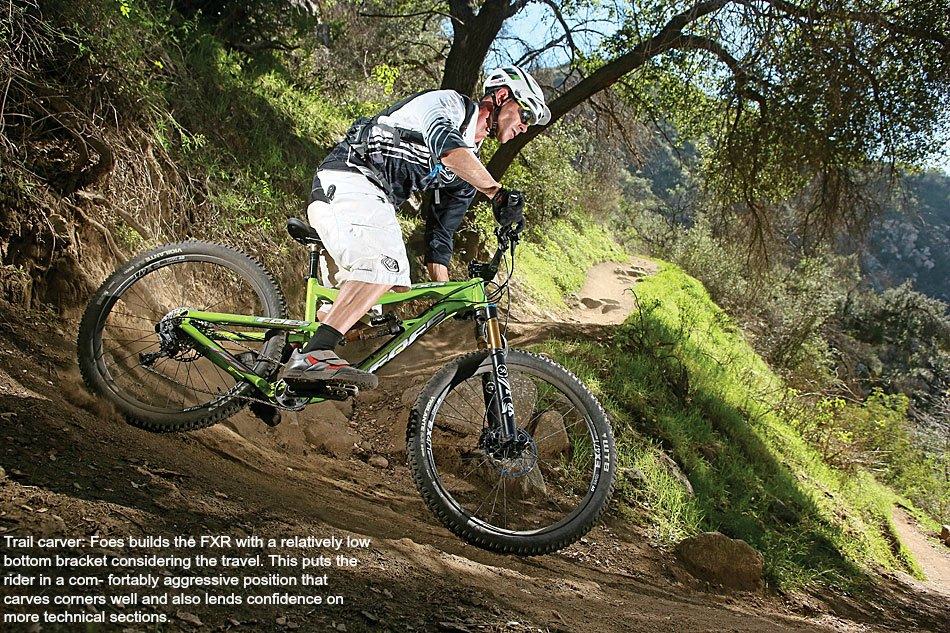 Cornering: The WTB Vigilante tires combine with the plush suspension and stiff frame to make a bike that corners well, even under the most aggressive riders.
Descending: The 7 inches of travel and relatively slack geometry make for a bike that’s confidence-inspiring on steep descents. The FXR was sure-footed enough to allow one test rider to tackle a descent almost always reserved for gravity-specific bikes on the first ride. That’s impressive.
The FXR is capable on steep trails and drops, and while it takes a little manhandling to get it airborne, once there, it is stable and confidence-inspiring. The FXR could be used as a park bike, but the suspension characteristics make it much more versatile than that. This is a long-travel trailbike that’s not afraid when the group ride wants to “take the tough way down.” 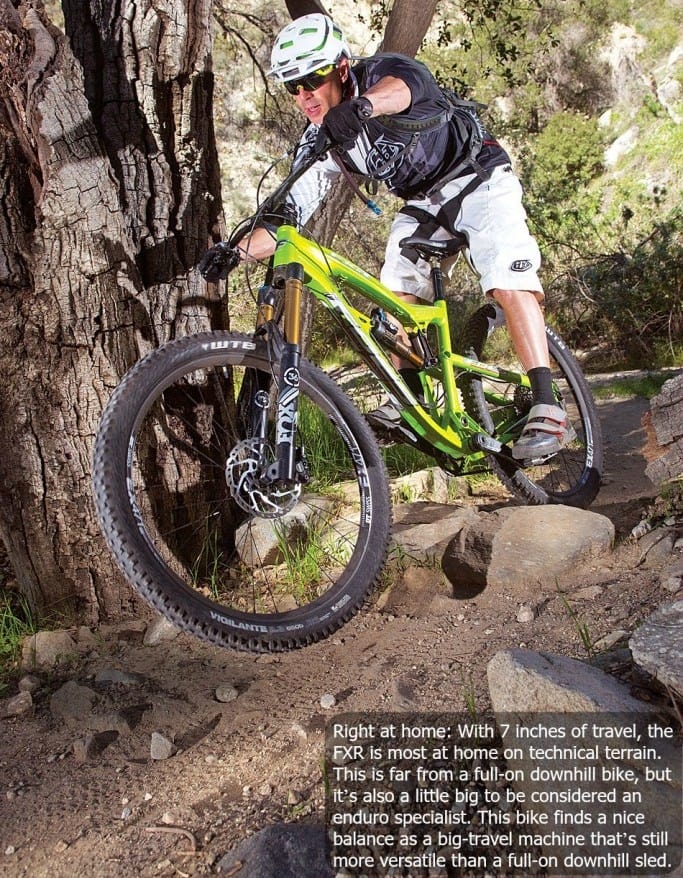 Braking: The Shimano XT brakes provide tons of stopping power and a consistent feel that’s second to none. The Foes single-pivot suspension design exhibits a small amount of braking influence, which can be felt as a slight loss of suppleness in the rear suspension under hard braking efforts. The suspension works exceptionally well, except under the hardest braking efforts, where it still works well but with slight resistance at the top of the travel.

Foes has also built this frame with no compromise in rigidity or durability, and that makes it a perfect match for the aggressive Clydesdale descender looking for a long-term companion. Big and tall riders who are hard on other frames should take a serious look at Foes’ bikes. The construction quality is second to none, and the low-leverage suspension design will more easily support rider weight for a dialed ride. 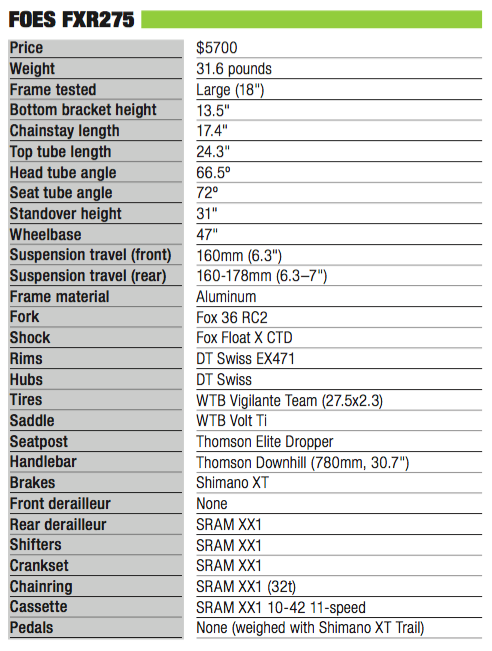 With 7 inches of rear-wheel travel, this bike certainly wasn’t designed as a lightweight enduro race bike; however, it’s also not as formidable as the Foes Mono downhill bike. Instead, this bike strikes a lovely balance as the gravity man’s do-it-all bike. Want to do an enduro race on Saturday? No problem. Downhill race on Sunday? You got it. Trail ride with your buddies on Monday night? As long as you have the fitness, it’s going to be a blast.
The FXR is built for the long haul. It’s also built with a rock-solid, single-pivot suspension design that’s low maintenance and very effective for even the most aggressive riders. For the journeyman gravity enthusiast, there simply aren’t many bikes that we could recommend more strongly.

Photo of the Day: Brandon Semenuk at the Red Bull Rampage, 2012