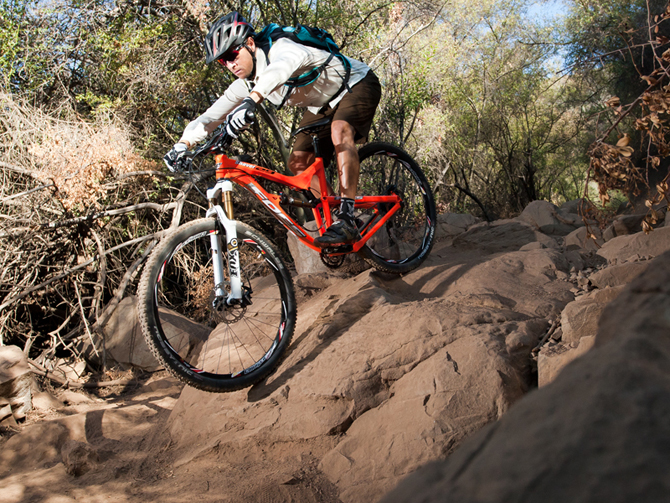 Brent Foes didn’t set out to be a bike manufacturer. Nearly 20 years ago, after a number of years as a professional motocross racer and then designing and building off-road race trucks, he looked at the state of mountain bike designs and thought that he could do better.

Drawing from his design and engineering experience, Foes built up a mountain bike for his personal use with more suspension travel than other bikes available at the time. While riding in the hills above Pasadena, Foes was spotted by an MBA staffer who shot photos of the unusual bike. After a surprise appearance in that year’s “MBA Buyer’s Guide,” Brent was flooded with calls from prospective customers. Foes Racing was born.

Foes is still creating trailbikes that are built to take abuse and keep on trucking for years. The Shaver 29 is no exception.

WHO IS IT MADE FOR?
That’s a little tough to answer, because the Shaver 29 is sold as a frame/shock combo, not a complete bike. Using lightweight carbon fiber and aluminum components, the Shaver could be built to hang with carbon fiber-framed trailbikes. Or, you could build it tough enough to conquer any mountain’s black-diamond trails. We’re not trying to be vague, but the Shaver 29 is a versatile bike that can serve a wide variety of riders. 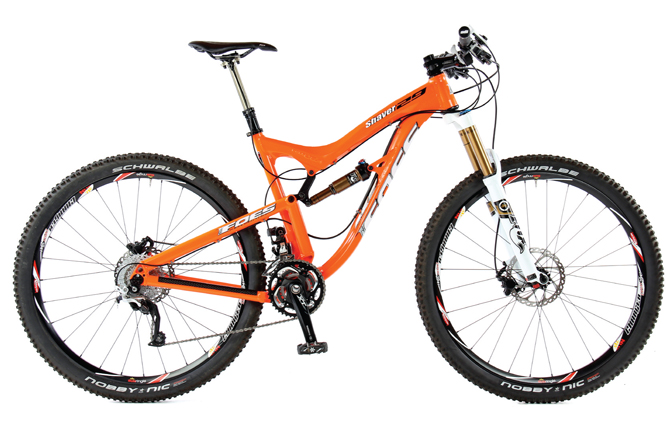 WHAT IS IT MADE FROM?
The Shaver 29’s stout aluminum frame is handcrafted in the United States at Foes’ Pasadena, California, workshop. The top tube is formed from two identical stamped halves that are welded together down the middle. All the hydroforming is also done in-house.

The frame features a tapered head tube and a 142×12-millimeter rear thru-axle for lateral stiffness. The rear suspension uses a low, 2.2-to-1 leverage ratio in long travel mode with a progressive rate linkage and is adjustable from 5 to 5.5 inches of travel. A removable chainguide mount (ISCG 05) allows the bike to be built up with a double or single ring for aggressive trail riding.

WHICH COMPONENTS STAND OUT?
Our Shaver 29 was built with a solid, straightforward trail package. The Shimano XT 3×10 drivetrain is a proven performer. Hayes Prime Expert brakes are incredibly adjustable on the fly and received good marks from the wrecking crew earlier this year. The Fox Float CTD 5.5-inch-travel fork works well with the adjustable rear suspension, anchored by a Fox Float CTD shock. Foes also equipped our Shaver 29 with Fox’s DOSS adjustable-height seatpost. 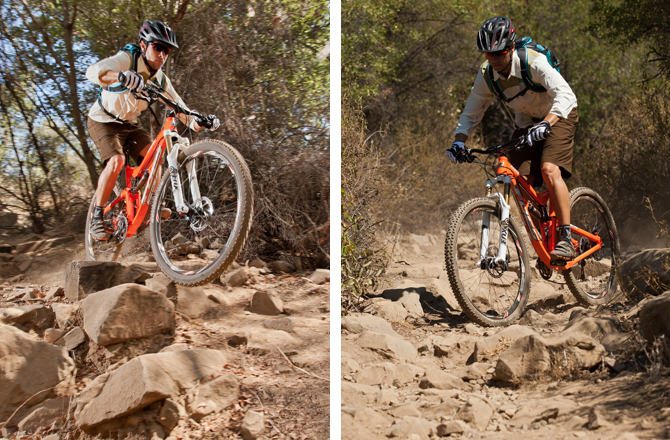 HOW DOES IT PERFORM?
We spent most of our test period on our local Southern California trails, which feature steep switchback climbs, fast descents and a mix of rocks, hardpack and loose sand. We mixed in a few days at the Mammoth Mountain Bike Park to test the limits of the bike on everything from cross-country trails to gondola-fed downhill runs.

Moving out: Getting dialed in on the Shaver 29 was simple because of the rear suspension’s low-leverage ratio. We tried the two rear-travel settings back to back and settled on the longer, 5.5-inch setting. It felt more balanced with the 5.5-inch-travel fork, and that extra rear-wheel travel adds even more cushion while descending. Thanks to the big wheels, 5.5 inches of travel and the slack head angle, the Shaver’s wheelbase feels long, but your position on the bike is neutral and somewhat compact. This optimizes rider input. Slight position changes to the rear or front bring noticeable results. The Foes doesn’t force you to exaggerate your body position; slight movements get the job done and conserve energy. 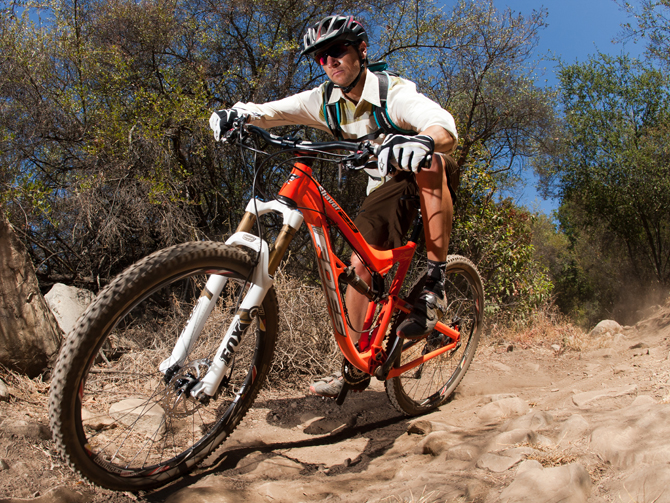 Cornering: The big bike has no problems whipping around tight switchbacks, but really shines when the trail points down. Lower the DOSS post and rail some high-speed corners. You are in for a treat. The frame feels stiff and never wallows through corners. The Shaver 29 was especially surefooted in the notoriously loose pumice corners of Mammoth, which are often riddled with chattering braking bumps. The big wheels, abundant suspension travel, Schwalbe Nobby Nic tires and dialed geometry had us sprinting to the corners to find out how fast we could hit them.

Climbing: We were surprised to be sticking to our 23-pound, cross-country, race-bike-riding buddy’s wheels while on the Shaver 29. We were more surprised when we weighed the bike. Don’t let the weight scare you. Foes is the champion of hiding weight. On everything but the steepest, punchiest climbs, the Shaver’s ability to maintain momentum is impressive.

The bike is very laterally stiff and shows minimal signs of pedal-induced bob, which can be completely eliminated in the Climb setting of the Fox CTD system. We opted to do most of our climbing in the Trail mode to allow the rear suspension to soak up bumps and keep the rear wheel glued to the trail. 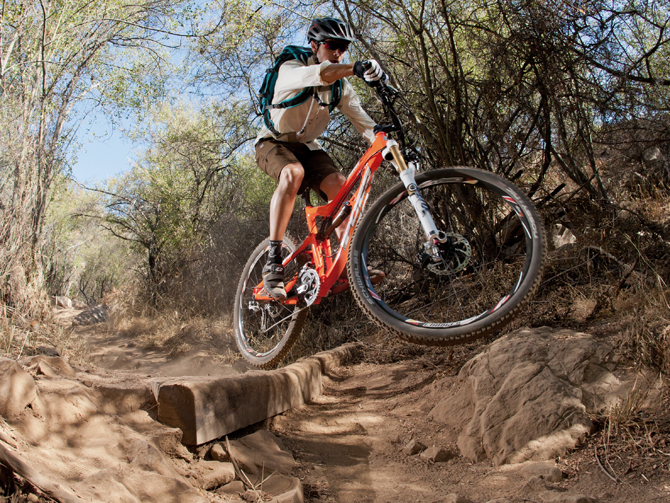 Descending: While we certainly gave the Shaver the usual treatment blasting down our local trails, we really put the bike to the test down some of the many rock gardens of Mammoth Mountain. We may not have been able to blast through sections like we would on a downhill rig, but the Shaver can handle pretty much anything a trail rider can throw at it.

While only half an inch separates the two travel settings, the longer, 5.5-inch setting seemed to soak up small bumps more effectively and gave us a plusher feel in the Descend damper setting.

Braking: The single-pivot rear suspension does firm up a bit under heavy braking, but because of the bike’s ability to maintain traction, this has way less effect than it would on a featherweight cross-country bike.

TRICKS, UPGRADES OR TIPS?
An adjustable-height seatpost is a must if you are going to build up a Shaver 29. Our only issue with the Fox DOSS (aside from the large remote levers) is that the actuation cable moves with the saddle. The bow of extra cable housing contacted the rear tire when the post was lowered and the suspension was compressed, which would eventually lead to cable-housing damage. You could experiment with the routing, but we would opt for a post with an actuation cable mounted to the static, lower portion of the seatpost that doesn’t move, regardless of the height setting.

BUYING ADVICE
The Shaver 29 is a very capable all-around trailbike that is tough to pigeonhole into a single category. It can mash through rough sections and rail corners like a bruiser of a bike, yet it is able to tiptoe through tight corners and pedal efficiently up climbs. Descended from a strong line of handcrafted bicycles here in the U.S., the Shaver 29 is a bike that can evolve with you as a rider. 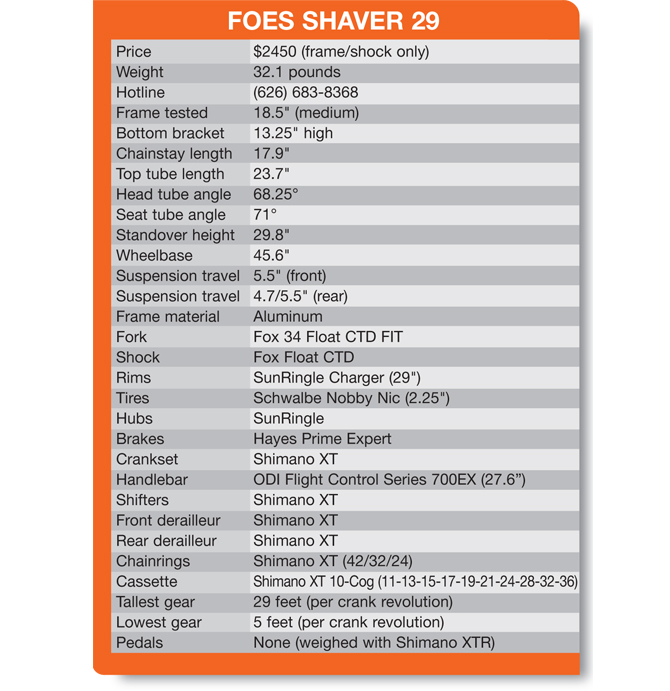