The Glory has been the flagship downhill race bike in Giant’s line for nearly 10 years and has been refined over that time with four different versions. The Glory has been raced by some of the fastest riders on the planet and has been ridden to the top of countless podiums, including one of the most remarkable rides the world has seen when Danny Hart piloted the bike to a World Championship title in the pouring rain in Champery, Switzerland. 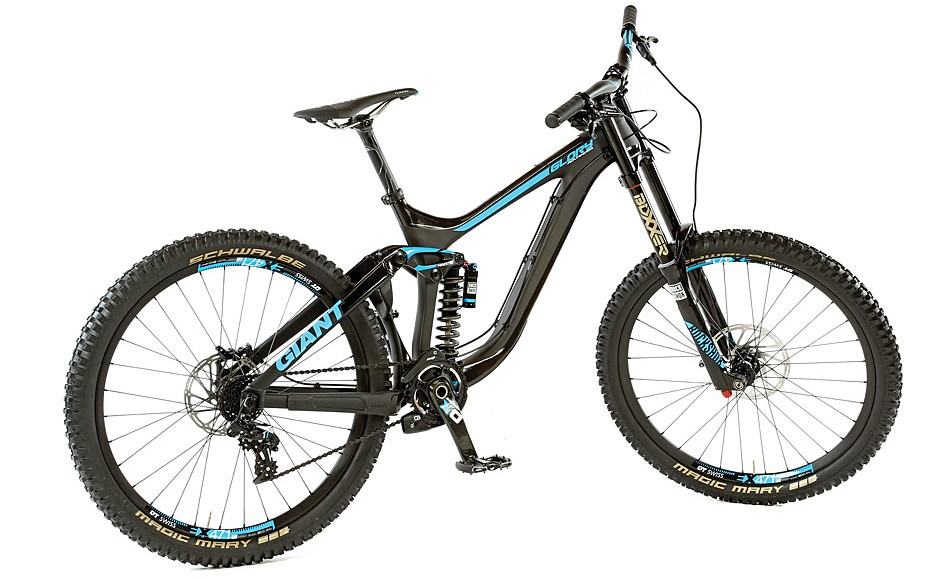 Giant was not the first company to enter the carbon downhill bike world, but it seems clear the designers were holding off, waiting for the latest refinements, including 27.5-inch wheels and dialed suspension and geometry, before jumping into the game. This new Glory Advanced is exactly what the name implies. It’s the most technologically advanced gravity bike Giant has ever built, and it’s hungry for the glory of putting its rider on the podium.

This is a pure-bred race bike with aggressive geometry and very advanced materials throughout. The bike is lightweight, but that doesn’t mean it will be happy doing the work for you. The Glory is a speed machine with the creature comforts of a relatively efficient suspension system, but this bike will only truly be happy doing Mach 2 with the rider’s hair on fire. This is the kind of bike that can truly be raced at an elite level right out of the box. Riders looking for a more affordable park sled should look at the less expensive versions of the Glory, because the price tag and performance of the Giant Advanced are for elitist gravity racers and enthusiasts. 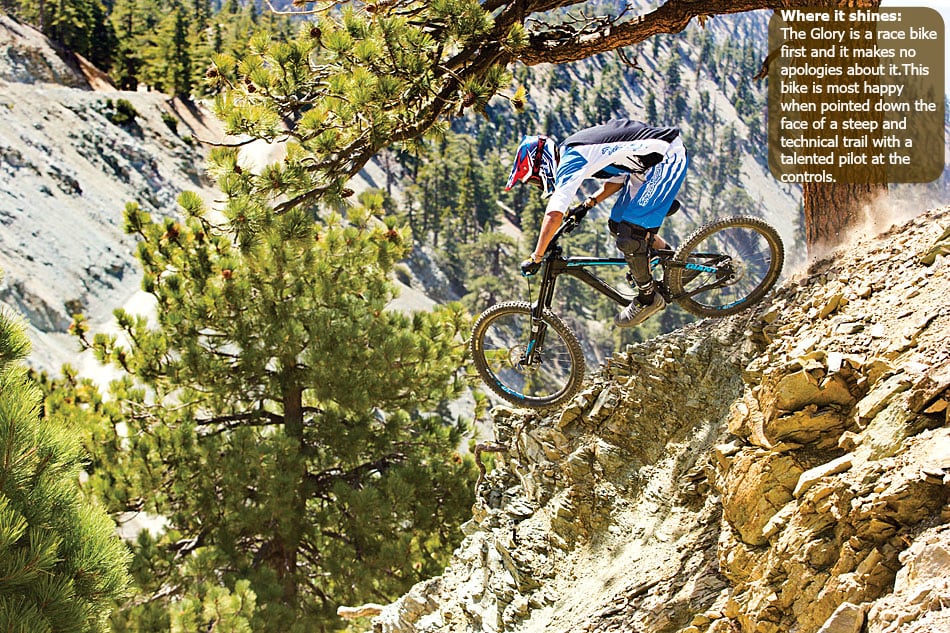 With 8 inches/203 millimeters of fully active Maestro rear suspension paired with the lightest DH frame ever produced by Giant, it’s most certainly the ultimate gravity bike in Giant’s lineup. The frame is built using Giant’s Advanced-level carbon fiber front triangle mated to an aluminum rear end. The geometry is designed around 27.5-inch wheels and has been extensively tested by Giant’s pro downhill racers on everything from the World Cup race circuit to laps in bike parks around the world—and even on many of the urban gravity challenges. The bike sports all the modern gravity bike amenities, including Giant’s proprietary Maestro suspension design, an OverDrive 2 tapered head tube, Press-Fit bottom bracket, and 12- by 150-millimeter rear axle spacing. 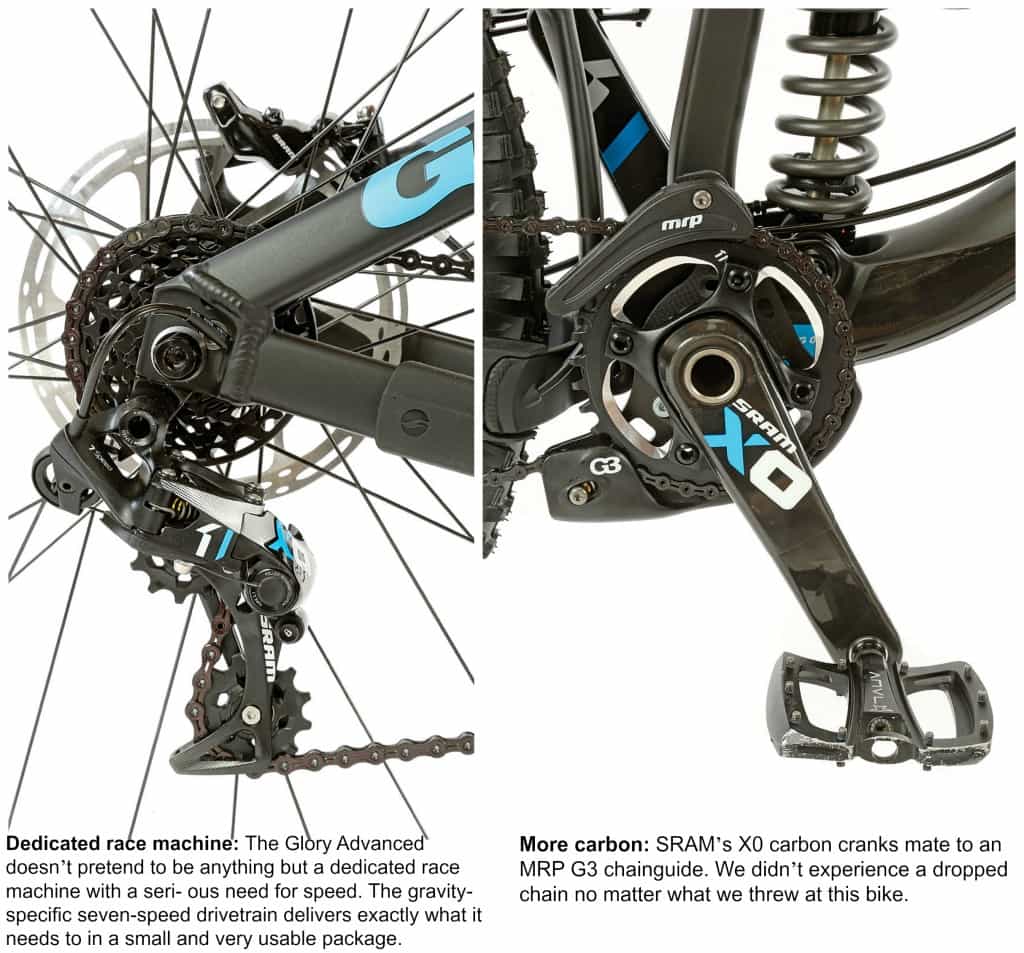 The top-level build kit would be right at home on the most elite-level racer’s bike, so it’s difficult to pick only a few components that stand out. The RockShox suspension provides a responsive and lively feel, while the SRAM X01DH seven-speed drivetrain provides reliable shifting with larger-than-average steps between gears to suit the specific needs of gravity riders and racers. The Schwalbe Magic Mary tires are among the stickiest we’ve ever ridden and worked well on the trails where we tested them, but don’t expect them to last an entire season of abuse. The soft rubber began to show signs of wear after only a couple rides.

The Glory comes spec’d with coil-sprung suspension front and rear, which means adjusting the spring rate requires physically swapping the coils. Fortunately, Giant specs different spring rates on the different sizes of the bike, so most riders will be happy with it right out of the box. Our 175-pound test rider felt at home with the 350-pound shock spring and stock fork spring. The compression and rebound adjustments also proved very useful, offering a large adjustment range. As with any complex machine like the Glory, dialing in the proper feel will take a little experimenting, but our test riders stuck very close to the middle of the ranges for compression and rebound, both front and rear, which gave us a dialed and matched 40-percent sag that worked well for the duration of the test. 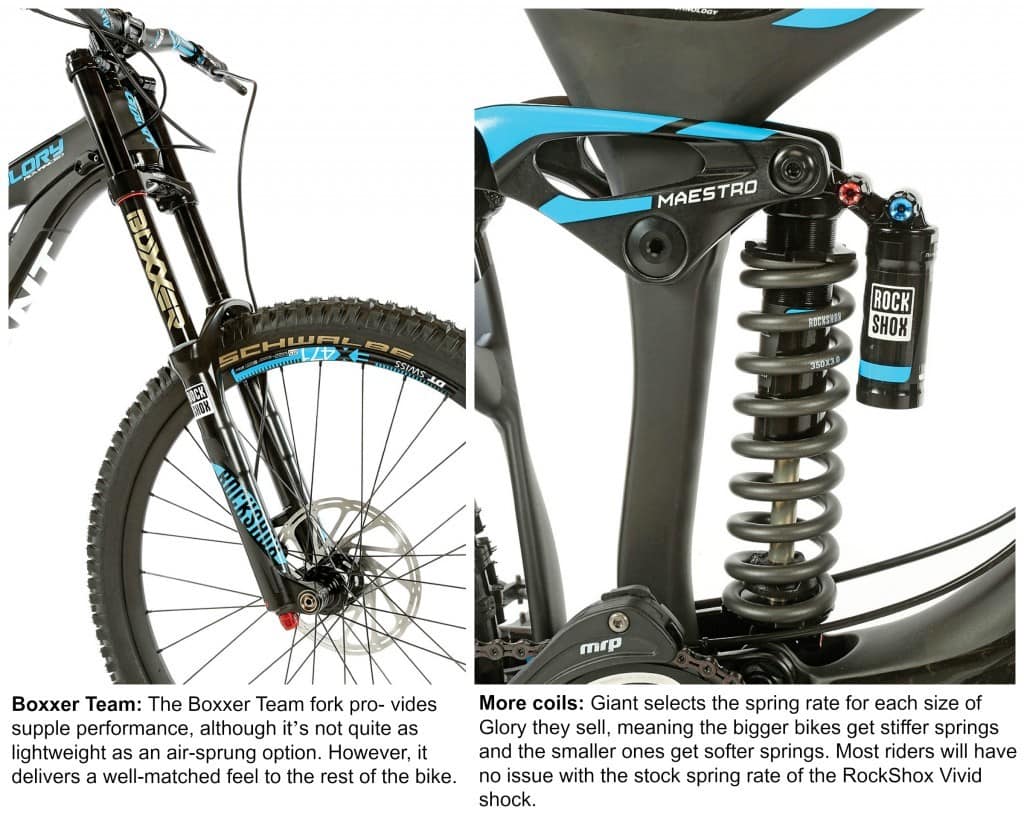 The Glory is a big bike with a very slack head angle and relatively long wheelbase. As a result, the high-speed control and stability are second to none, although slower-speed situations require more manhandling.

The Glory would work reasonably well as a dedicated bike-park sled, although the aggressive geometry makes for a bike that prefers to take the corners at high speed. We found ourselves tiptoeing through tight switchbacks, but more than making up the time on the highest-speed corners when the suspension could be opened up to allow the ground-leveling nature of the bike to shine through. 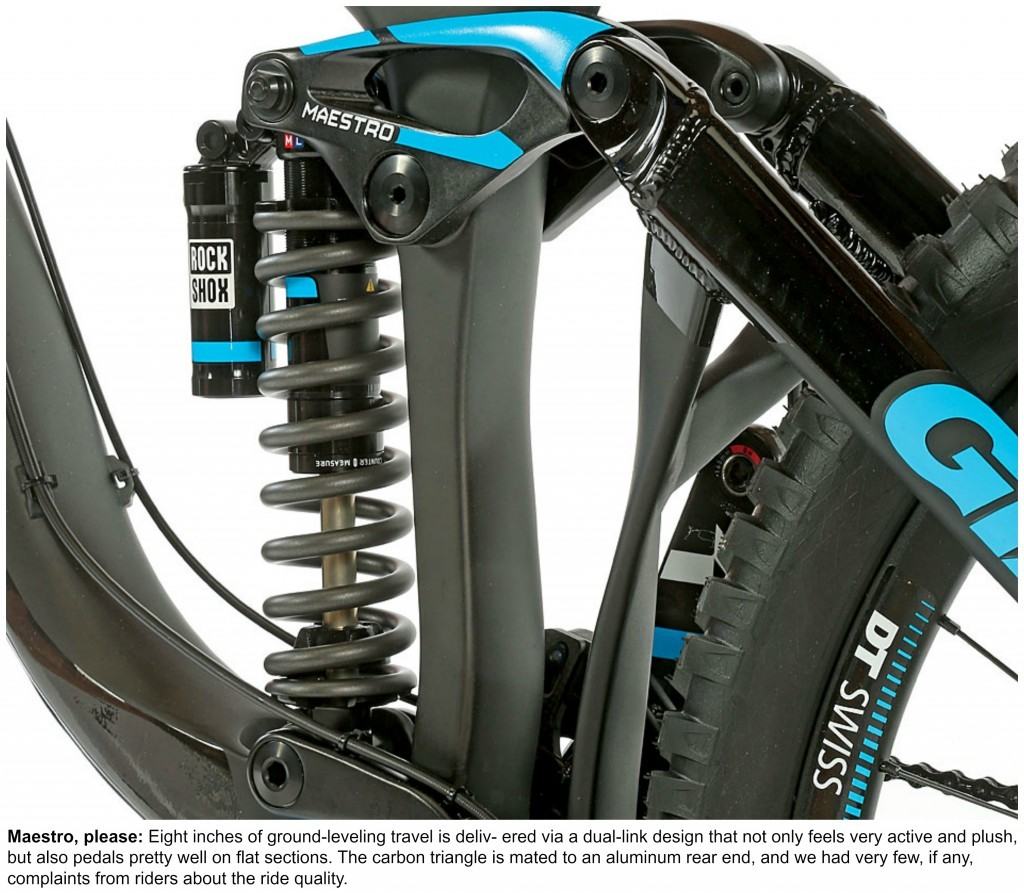 Giant’s Maestro suspension works exceptionally well to deliver an active and plush feel on the descents. The only thing that will hold the Glory back is the talent of the pilot. Steep and technical trails are mincemeat under the Glory’s wheels. 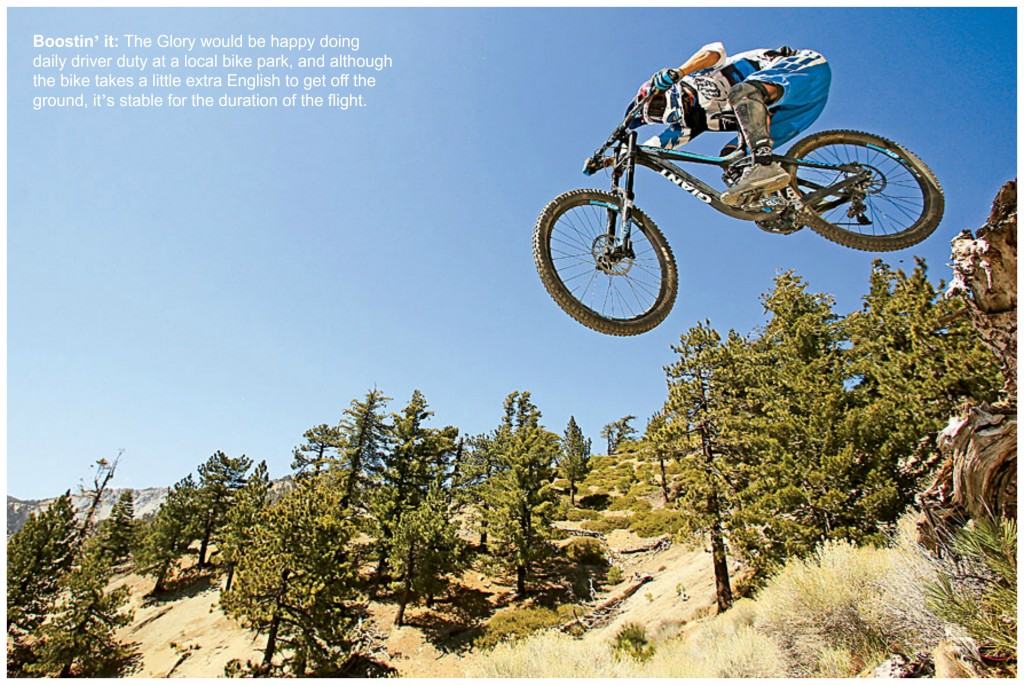 If we were to rank the strongest attributes of this bike, boosting it over jumps would be second tier compared to the impressive control the rider gets over high-speed chunder. Like many downhill race bikes, it has a somewhat glued-to-the-ground feel unless piloted by an elite rider. That said, though, our most aggressive test riders were able to float this bike over some impressive lines, proving that the Glory is actually pretty well-rounded.

Sure, this bike isn’t going to win any climbing competitions, but pedaling efficiency should never be thrown completely out the window. The Glory delivers an adequate pedaling platform thanks to the Maestro design, and that slight amount of anti-squat might just be enough to get you to the finish line first. 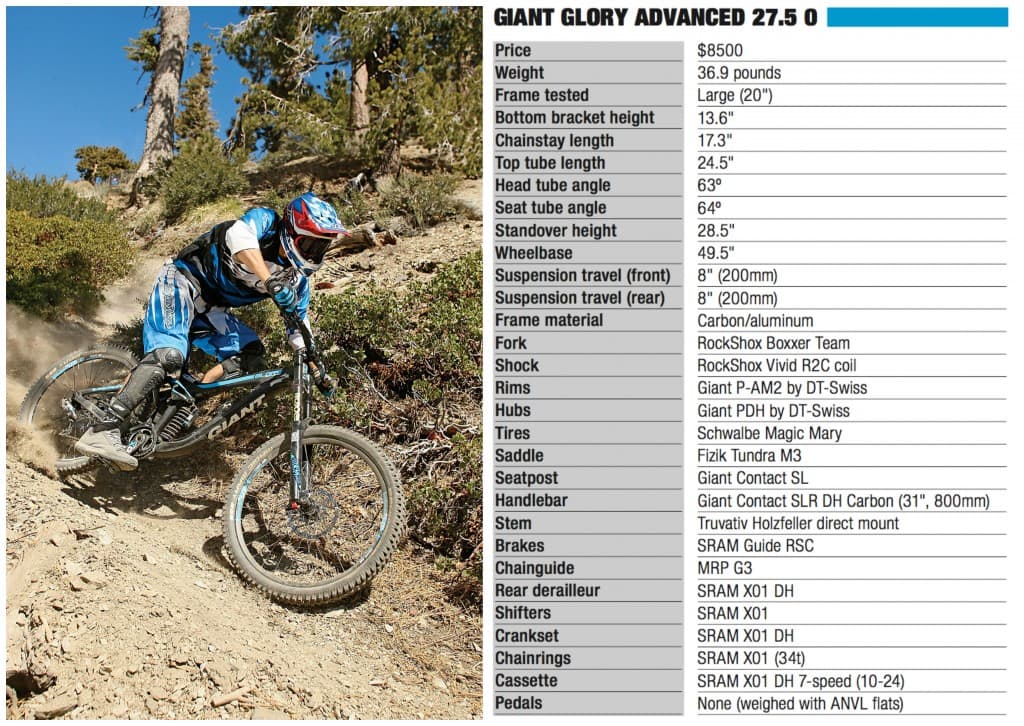 We would have preferred to see the Glory spec’d with an air-sprung fork to ease the setup and save a few more grams, although we really couldn’t complain much about the buttery-smooth feel the RockShox Boxxer Team provided.

Our Glory came with the original spec parts, and Giant has let us know there will more than likely be small changes to the small components. For example, the Truvativ Blackbox handlebar will be swapped with a house-brand Contact SLR bar, and the Guide brakes may eventually be replaced with the SRAM Guide Ultimate version. Nevertheless, we can’t imagine those small tweaks will affect the price or performance much, especially for riders who may want to personalize the Glory with their own cockpit parts.

The $8500 price tag seems high for a bike that’s sure to take some abuse on the mountain. For riders looking for a high-speed weapon to slay bike parks and downhill racecourses, though, it would be tough to find another out-of-the-box bike that would deliver this kind of performance. The race pedigree of the fourth-generation Glory ensures that it’s competitive with any other gravity machine out there, and we can say that the improved, more-modern geometry, coupled with a lighter carbon frame and 27.5-inch wheels, makes an already sweet bike a little sweeter, especially when the racecourse points down a steep, high-speed trail.

Feeling Off Today? Top Ten Excuses For Riding Too Slow