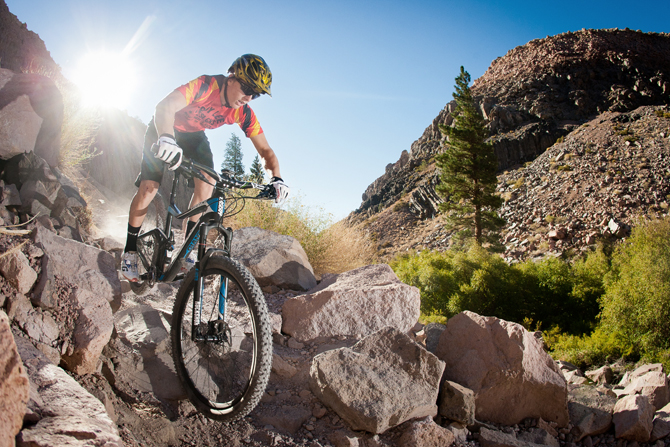 When Giant looked at the math and real-world trail analysis, they determined that the benefits of 27.5-inch wheels were profound enough to justify dedicating the majority of their 2014 model lineup to the wheel size. At the forefront of this 27.5-inch charge into the future is the new Trance Advanced 27.5.


WHO IS IT MADE FOR?
While this 27.5-inch-wheeled Trance replaces the 26-inch version, Giant will keep the Trance X 29?only in its second year of existence?available for the time being. While the bikes share a common name, their different ride characteristics will cater to different clientele.

Giant’s Trance line has always catered to the trail rider who wants it all. The Trance 27.5 is not just for trail riders, but for serious racers battling the clock in the fledgling discipline of enduro racing. With the boost in suspension travel from 5 to 5.5 inches and the updated geometry, the 27.5 is slacker, longer and ready for more aggressive riding than any Trance before it. 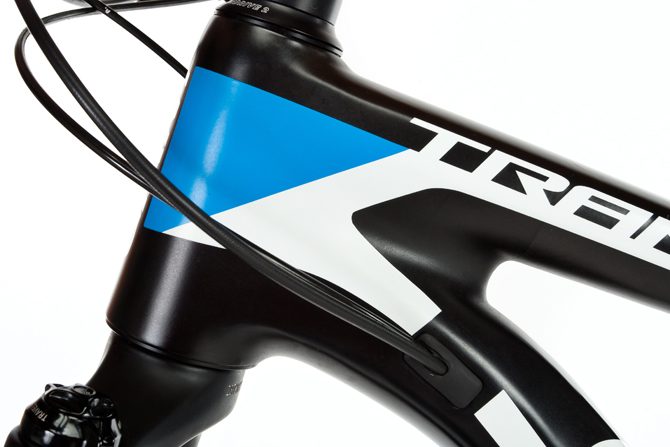 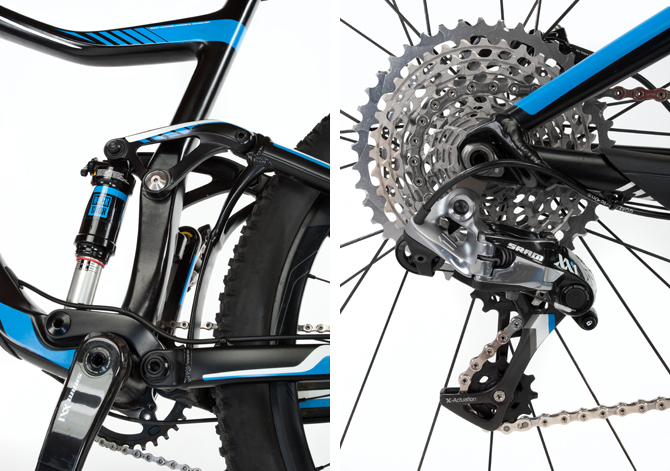 WHAT IS IT MADE FROM?
The Trance Advanced 27.5 features a carbon fiber front triangle and an aluminum rear triangle. The frame features Giant’s OverDrive2 head tube that tapers from 1 1/4 to 1 1/2 inches for additional stiffness over even traditional tapered steerer tubes. The frame also features a PressFit bottom bracket and a long-awaited 142×12-millimeter rear thru-axle.

Giant has cleaned up the aesthetics of the Trance Advanced immensely compared to their previous 26-inch carbon offering. The Trance 27.5 features internal cable routing via a smart port and plug system that makes installing cables relatively easy for mechanics while still keeping the external appearance neat and tidy. The frame has impact guards in key areas for additional protection.

WHICH COMPONENTS STAND OUT?
The “0” features a top-of-the-line parts spec, mostly from SRAM and Giant. The XX1 drivetrain (one chainring up front and 11 cogs in the rear) keeps the bike looking clean and simple while also keeping it nearly silent in the rough. RockShox handles suspension duties, while powerful Avid X0 Trail brakes are a welcome addition to the Trance’s all-mountain capability.

Giant has definitely stepped up their component offerings over the past few years. The Trance comes with their Contact SLR stem and handlebar, which looks right at home, and Giant didn’t miss a beat getting their 27.5-inch, P-TRX0 carbon trail wheels ready for 2014.

HOW DOES IT PERFORM?
Ergonomics: From the first time you swing a leg over the new Trance, you can tell it’s a different beast from any other bike that has shared its name. The rider’s weight feels closer over the rear wheel, and the top tube feels a bit longer and is paired perfectly with a short stem and wide handlebar combo. The rider position in the cockpit feels very natural and balanced, with a slightly less forward-leaning angle than a cross-country bike, making it comfortable even for long stints in the saddle.

Pedaling: The Maestro suspension offers a lot of anti-squat characteristics under pedal pressure, regardless of the shock setting. We found ourselves riding in the unlocked shock setting more than we originally anticipated, and we spent the rest of our time in the middle setting. If, however, you’re after an even firmer pedaling platform, the Maestro has you covered all the way to a nearly locked-out setting.

The smaller wheels, which in most cases felt closer to 26 than 29 inches, offer quick acceleration, especially when paired with a lightweight and stiff wheelset like the Giant P-TRX0.

Climbing: The Trance’s parts spec helps keep the bike to a very respectable, sub-26-pound weight, and the Maestro suspension gives the rider a solid pedaling platform for churning out climbs. We were impressed with how well the bike accelerated when attacking the trail out of the saddle.

Because of the 27.5’s increased suspension travel and slackened geometry, it gives up some climbing prowess compared to the Trances before it. While the differences are noticeable, we think it’s a worthwhile trade-off for the rewards in other areas of the ride. The front end unweights more readily on steep climbs, which caused a few missteps on steep and tight uphill switchbacks. To combat this, the Revelation RLT3 fork’s dual-position setting allows the travel to be reduced to 5 inches to help keep weight on the front wheel on climbs. While this improved the feel of the geometry when the trail was at its steepest, there was noticeable drivetrain drag in the low setting.

Cornering: While the Trance is more aggressive than ever, Giant knew that they had to maintain some quick-handling characteristics as well. The smaller wheels allowed Giant to push the geometry further than they had with the 29-inch version while still maintaining the ability to dive into tight corners; however, the long and stable geometry of the Trance 27.5 really comes to life when the speeds increase. The slack front end allowed us to maintain a balanced position with enough weight over the front wheel, even on steeper terrain, that we didn’t feel as if we had to hang off the back of the bike. We were constantly impressed with how stable the relatively lightweight Trance was through high-speed, sweeping corners. 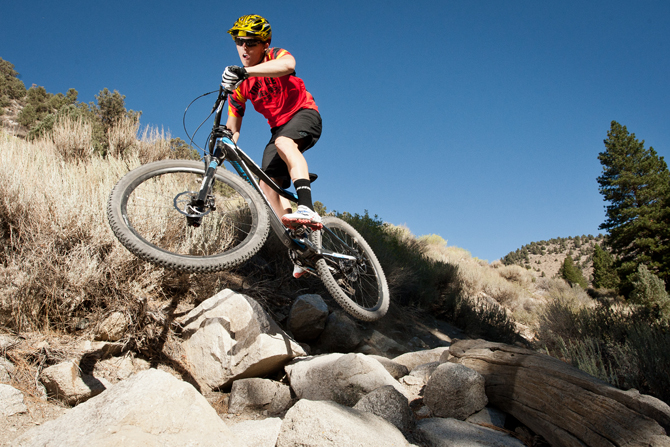 Descending: The Trance’s new geometry shines brightest when it’s pointed downhill in a hurry, striking a careful balance between point-and-shoot capability and lively precision. The 27.5-inch wheels certainly won’t be mistaken for 29-inchers through rough sections, but the mid-sized wheels provide a more lively ride, capable of flicking around the trail to find the best line in a hurry.

The Maestro suspension with the RockShox Monarch shock isn’t overly plush, but makes good use of its 5.5 inches. The rear suspension offers a supportive feel with a solid ramp at the end of the stroke for popping off the trail at a moment’s notice, which further enhanced the liveliness of the ride.

Braking: Avid’s brakes can be hit or miss depending on the bleed job, but we love the feel of a properly working set. Our Avid X0 Trail brakes were performing as intended with plenty of power and very controllable modulation.

TRICKS, UPGRADES OR TIPS?
Enduro racers looking to push the Trance 27.5 to its limits should consider the Trance SX 27.5, with its 34-millimeter, 6.2-inch travel fork. Otherwise, the new, 6-inch RockShox Pike would be a solid choice for the Trance rider looking for something a bit more capable up front.

Additionally, we found the stock Schwalbe Nobby Nic tires to be a bit flimsy in the sidewall department. Even with proper pressure in the tires, they started to fold when we were cornering our hardest, which was a bit unnerving.

BUYING ADVICE
So, does the Trance 27.5 make last year’s 29-inch Trance obsolete? We don’t think so. While the 27.5 is certainly an impressive bike, each bike is different enough to cater to separate riders. Without the less-aggressive Trance X 29 in the lineup, the jump from the cross-country-ready Anthem to the Trance 27.5 would seem too drastic.

The geometry is spot-on, and the fit and finish of the bike’s overall package are on a level that we’ve never seen from Giant. Most important, the Trance continues to deliver what it has always strived for: a versatile ride that can mix it up on nearly any terrain. 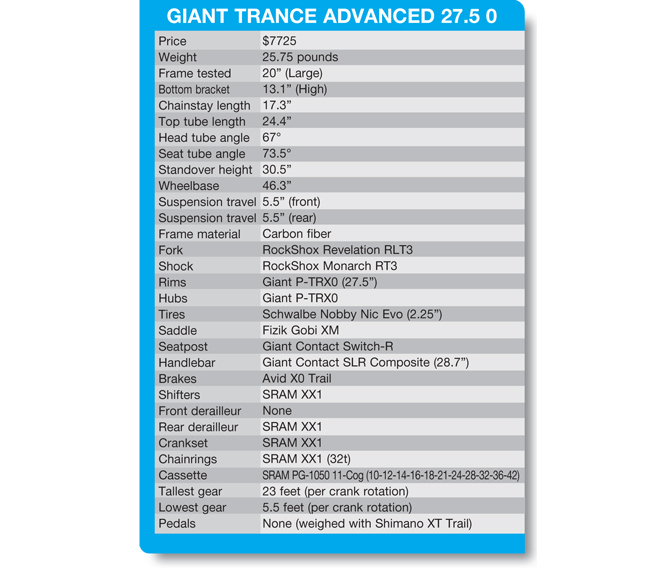 Photo of the Day: Jon Buckell at Fontana

Throwback Thursday – How To Bunnyhop with John Tomac – from January, 1987