Both Intense and DVO are Southern California companies with a serious passion for downhill racing. Intense has a rich heritage in gravity racing that dates back to the world’s fastest racers, including John Tomac, Sam Hill, Brian Lopes, Chris Kovarik, Sabrina Jonier, and too many more to name.

DVO sprung from the Marzocchi team when the company went through serious changes in 2012 and the lead design team decided split to start its own venture. When we heard about this collaboration between the two companies, we simply had to give the bike a try. The DVO EVO is built from stock parts from Intense and DVO components and looks more like a carefully built custom rig than a stock model. Intense plans to make this a ‘Special” but not “Limited” Edition, meaning as long as you’ve got room on your platinum card, one of these beauties can be yours. 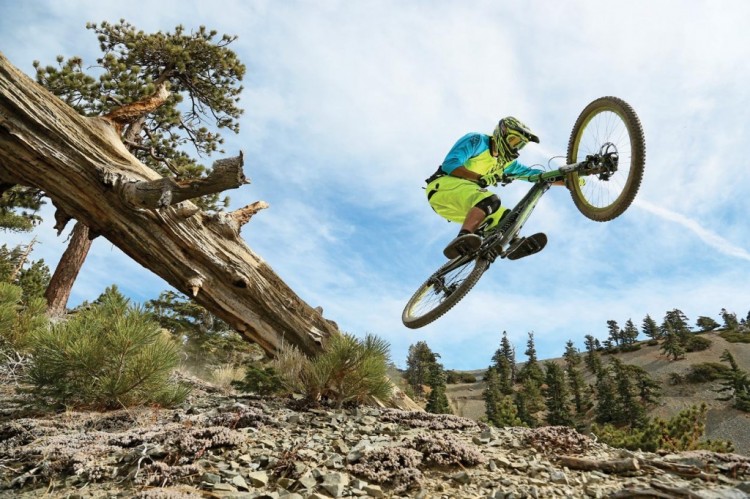 WHO IS IT MADE FOR?
The 951 has long been the race bike that’s capable of daily driver duties in the bike park. The long-travel frame sports a geometry that’s not as aggressive as Intense’s flagship race bikes but still feels new-school enough to hang with the gravity junkie bikes if piloted by a skilled rider.

WHAT IS IT MADE FROM?
The 951 is built from aluminum and is 100-percent made-in-the-USA, from the welds of the tubes to the CNC machining on the dropouts, rocker and hardware—even down to the cardboard box it ships in. This is as close to a 100-percent ‘merican built downhill sled as we can think of. The bike also features oversized pivot bearings throughout, a 12 x 150-millimeter rear axle, threaded bottom-bracket shell, tapered head tube, and custom graphics to match the “green with envy” DVO components. The suspension design is Intense’s take on the Virtual Pivot Point Generation 2 platform, which uses upper and lower links to achieve the 8.5 inches of rear wheel travel. Intense also updated the 27.5-inch wheels, improved leverage rates, and includes a bold new graphics package. 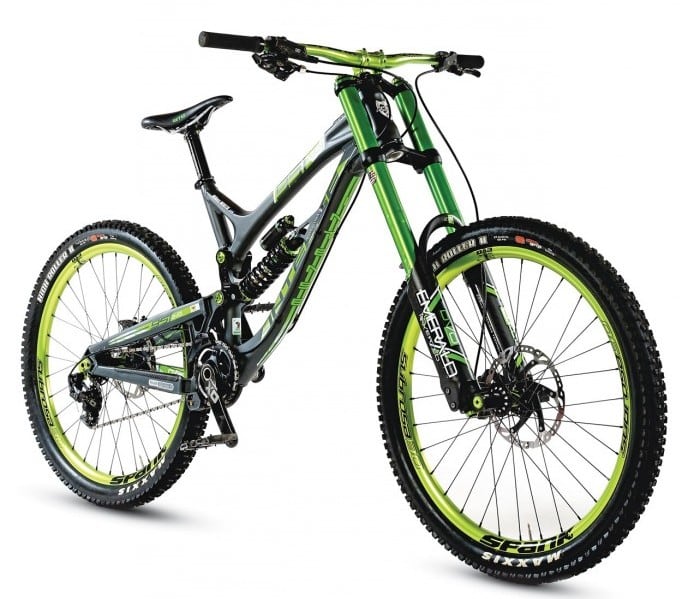 WHICH COMPONENTS STAND OUT?
DVO’s suspension is the heart of this beast, delivering almost 9 inches of travel front and rear—but we’ll get to those standouts a little later.
The SRAM X01 drivetrain provides seven speeds of snappy shifting coupled with the chain security of a narrow-wide ring. When you add an e*thirteen guide to the mix, we’d be shocked if you could ever drop a chain from this bike.
Shimano’s Saint brakes are the standard by which every other downhill-specific brake should be measured, and they fit perfectly on a bike like the Special Edition DVO EVO. 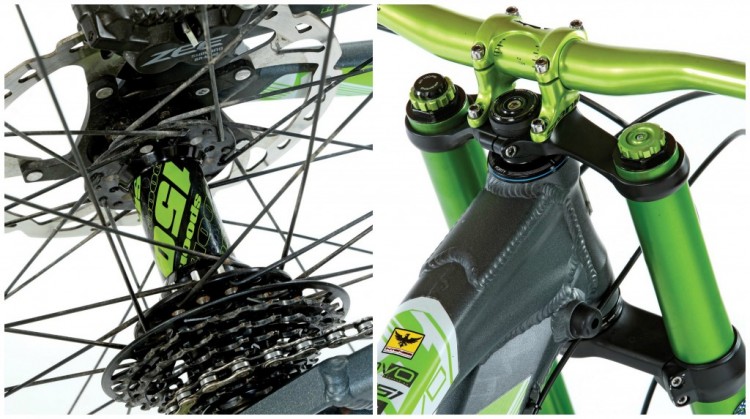 HOW DOES IT PERFORM?
DVO Emerald: When you turn a fork upside down, as with the DVO Emerald, it has inherent advantages and disadvantages over a conventional design. First, the bath oil sits right on top of the seals, which eliminates much of the sticky feeling forks can develop when they’re not cycled properly. Moreover, by decreasing the weight of the lower half of the fork, DVO makes the portion of the fork that needs to react to bumps lighter and more responsive—in theory. The Emerald fork features a carbon fiber lower casting that sports a brace specifically designed to overcome the inherent weakness of an inverted design: a lack of stiffness. The oversized carbon brace delivers much-improved steering precision compared to other inverted downhill forks we’ve tested.

Additionally, DVO builds many adjustments into the fork to improve the damping, spring rate and curve range to accommodate nearly any preference. While most of the advantages of the Emerald will be felt by everyone who rides one, this is the kind of fork that requires careful setup. It is best be suited to the advanced suspension tech. While the fork is nearly a pound heavier than nearly any other fork in this category, it makes up for the weight with an exceptionally supple and adjustable ride, as well as stiff and precise steering. 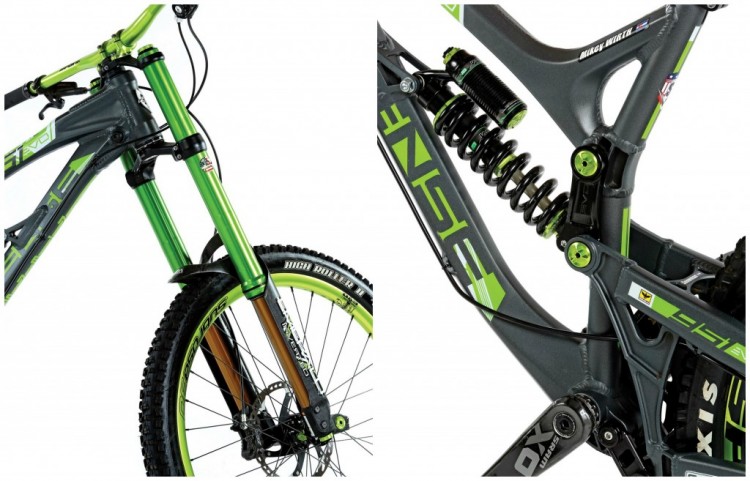 Moving Out: The 951 is a big bike, no question about it. From the gnarly 50-inch wheelbase to the 24.5-inch top-tube length, to the over 8 inches of rear wheel travel, this is a hoss of a machine. Thankfully, though, the smart build kit keeps the weight reasonable for a bike with this intended use. The DVO EVO may not be as light as a full-carbon race platform, but that’s not it’s first priority. This bike is built to handle daily-driver duty in the bike park just as well as it does flying around the racetrack with the clock running.
The setup: Our DVO suspension setup proved no more complex than the setup on a typical downhill-specific machine and provided plenty of adjustability to comfortably dial in the ride. The single air valve on the fork made finding the right spring rate a breeze, and our 175-pound test riders found their sweet spot with about 65psi. The rear shock also proved easy to set up. Our riders preferred a 500-pound spring, which seems to be a big improvement over previous 951 models that required tremendously strong springs to support rider weight. Intense has refined this frame over the years to not only include updated geometry and bigger wheels but much-improved suspension performance.
Descending: This bike made mincemeat of the steepest trails we typically test on. This is not a light and flickable race bike. Instead, it feels like a freight train through the chunder. With a long wheelbase and slack 62.5-degree head angle, there no hiding that the DVO EVO is a lot to manhandle on the trail. The cornering manners are surprisingly nimble for a bike this burly, but the bike truly shines on fast terrain and very steep chutes. 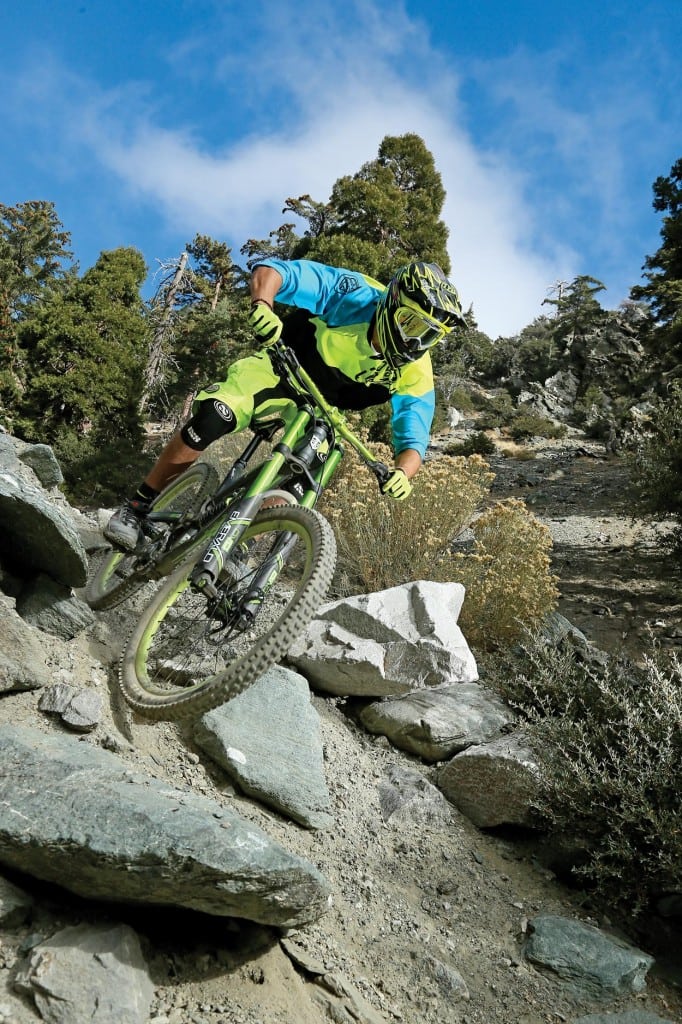 Cornering: The stable nature of this bike requires the right terrain to showcase its aggressive cornering nature. This bike wasn’t designed for flat and slow cornering. The more this bike is pushed in steep terrain at high speeds, the more the handling comes alive.
Park bike feel: There’s no denying this is a big bike, but our testers found themselves pleasantly surprised with the lively feel of the 951 popping off lips drops and jumps. Whereas downhill race machines can feel Velcro’d to the terra, the 951 happily finds its way into the air over tables and jumps, as long as the pilot can handle the girth once airborne.

TRICKS, UPGRADES OR TIPS?
The decals on the DVO EVO are not under any clearcoat, so if you plan to do some serious shuttling with this thing, count on some cosmetic damage. That said, though, Intense makes it easy to replace the decals with a webstore that sells them directly. For a mere $30, you can make your 951 look good as new. As an added bonus, the grey powdercoat finish proved very durable for the duration of our test, which included a ton of shuttles, gravity riding, and more abuse than we throw at most Mountain Bike Action test bikes.

The DVO fork is a large beast. In fact, it wouldn’t clear hitch-mount racks we typically transport downhill bikes with. The fork is also wide enough that it missed the integrated fork stops on the frame, forcing us to run both the frame stops and the fork bumpers. 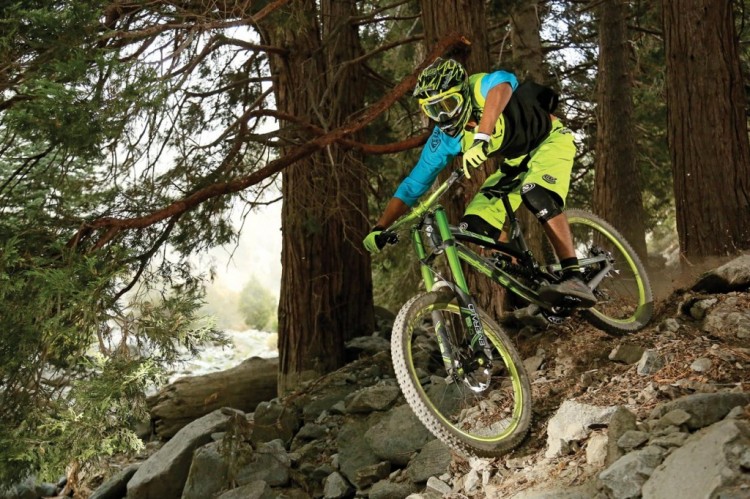 BUYING ADVICE
Whether you’re looking for a dedicated park bike or a downhill race machine, the DVO EVO has you covered. The bike sports a new-school geometry that begs to be ridden fast, coupled with a suspension design that’s playful and poppy enough to get the thing airborne easily. The 951 frame is certainly not the most dedicated race machine Intense has ever built; however, the DVO suspension gives it enough confidence to plow through rock gardens with ease, and the updated geometry improves its performance when the speedometer ticks upward. Bottom line, the 951 is a blast to ride. The DVO package lives up to its hype, and the well-executed, green-on-grey, Special-Edition color scheme will turn heads in the lift line. 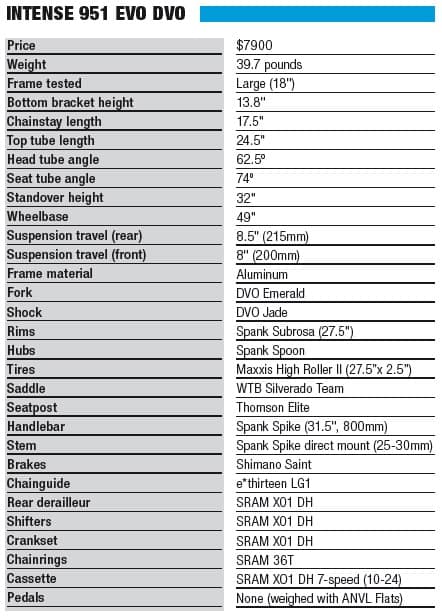