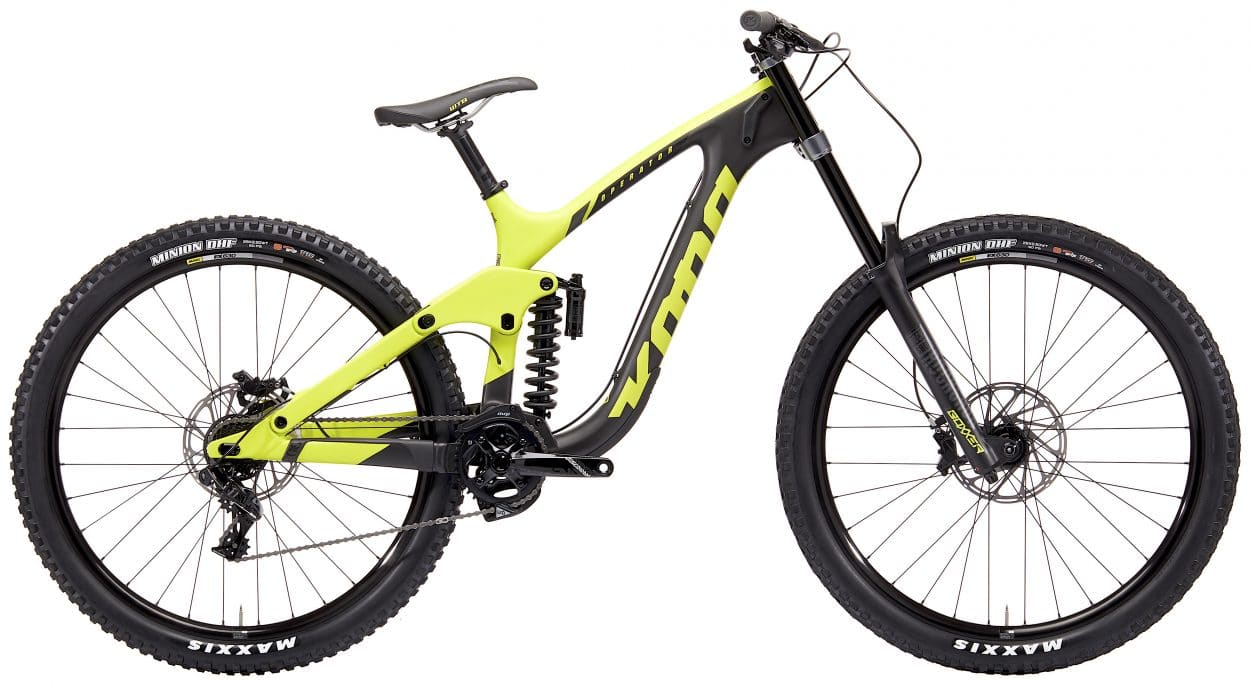 Two-wheeled Transformer. The Kona Operator can handle 27.5- or 29-inch wheels with a Flip Chip and fork swap. With dual settings for both reach and wheelbase, you can dial this bike in for any experience.

Kona has a lot of clout in the gravity mountain bike market. It has been one of the more prestigious brands since the creation of the “freeride” movement. The 29-inch downhill mountain bike category has had mixed reviews in the past, and the industry has been reluctant to embrace it. Here we are in 2019, and nearly every discipline in mountain biking has proved the larger wheel to be faster and more efficient, yet the gravity world wants to hold on to its roots. That mentality is on its last leg, especially when progressive brands like Kona bring to the table a totally versatile downhill machine. For those hesitant to modernize, just know that this bike is fully capable of accepting 27.5-inch wheels with minor adjustments. But keep those oversized hoops handy, because they will probably be back on in the near future.

The Operator was built for aggressive riding, so durability and stiffness were prioritized over saving grams. The front triangle, linkage and seatstays are carbon, and Kona chose to use aluminum on the chainstay to increase stiffness and impact resistance. The rear dropouts have two axle-location options to change the wheelbase by 15mm. A simple Flip Chip between the seatstays and linkage, along with a fork swap, make switching wheel sizes from 29 inches to 27.5 inches pretty simple. Another unique feature is the headset cups that can flip 180 degrees, allowing the reach to change by 10mm. The Operator offers a lot of adjustability, so there is no doubt that you can get this bike tuned specifically for you.

Kona kept the spec on this bike extremely practical yet capable. Six thousand dollars is a quite an investment, but nowadays it is an average price in this bike category. The Boxxer fork and Super Deluxe Coil from RockShox allow for endless tuning possibilities. The drivetrain is the SRAM GX 7-speed downhill group. Now, let’s go off on a slight tangent. The gearing is awesome for shuttles and lift-access trails, and we never longed for more gears. But let’s be honest, sooner or later the trail heads uphill, and it would be nice to use the block-out gear and trade in the spoke protector guard for an oversized, usable cog, like maybe a 34. This cog would still act as a chainguide, yet would expand the range and allow you to get this bike deeper in the woods with less walking.

With an eight-speed drivetrain and keeping the range of the existing seven gears currently on the bike, it would give you even more accessibility. In the pure race market, obviously you wouldn’t need this or want the additional chain links that could increase the possibility of derailing on the top end. But, realistically, the Kona Operator will see far more bike park, secret trail and shuttle experiences than laps between the tape. The Code R brakes are incredible, but if you are heavy-handed, you better pay attention, because they require finesse. The Race Face Atlas 35mm bars and stem felt comfortable and familiar. We had zero issues in all of the heavy rock banging with the Mavic EC630 wheels. We ran tubes in the Maxxis Minion DH tires without even a hiccup. This bike is a great value, with all branded parts and not a single mechanical issue throughout our multiple test sessions. 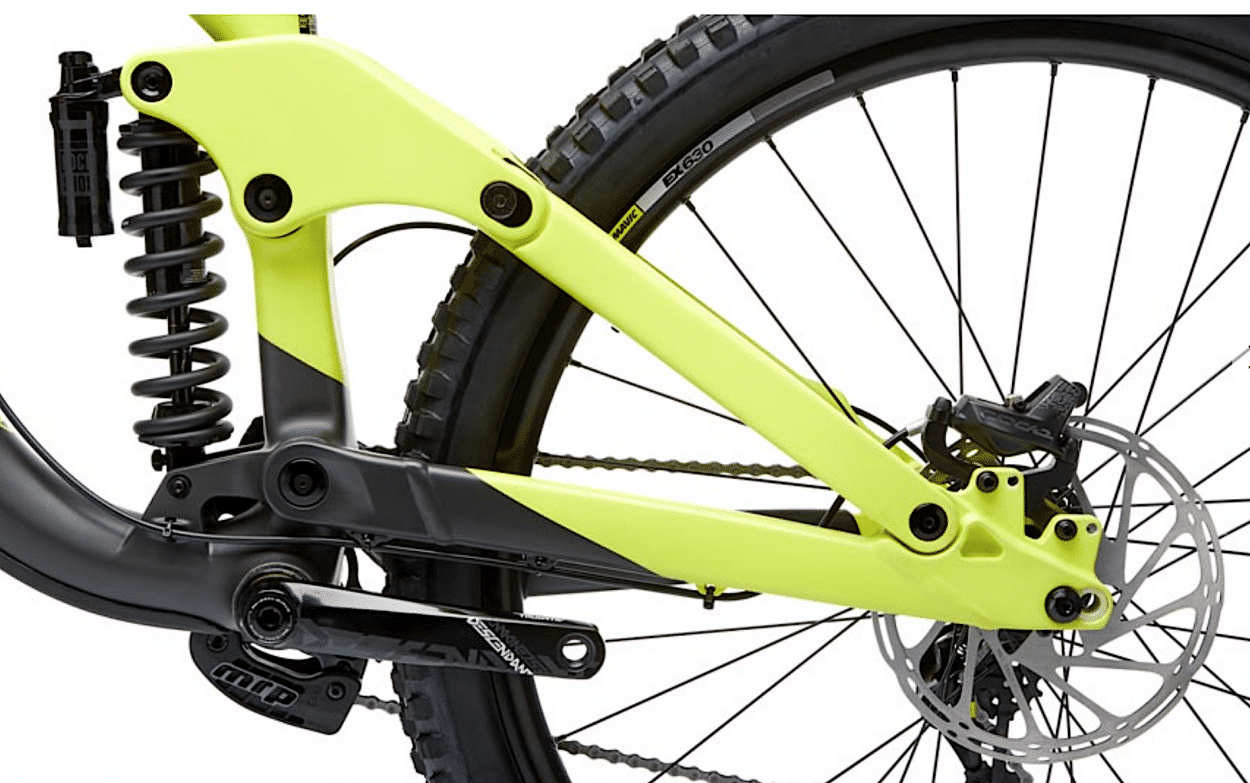 We used four different testers with different body weights and riding backgrounds, so the suspension setups were all over the board; however, even stock out of the box, we could set sag, compression and rebound to suit each rider’s needs. In race mode, we dialed down the rebound and let the bike sit in the sag a little deeper, so it felt glued to the ground. For another rider to make the bike react a little more in the air, we increased air pressure, sped up the rebound and compression, and got the bike to pop off features a little more aggressively. Just like in the old video game, Ironman Ivan Stewart’s Super Off-Road, the most important thing is suspension. That is what you spend your money on first. Once the suspension is set, then and only then will you have the control to go fast. The Kona Operator is no different. Setting this bike up for yourself will be the most time-consuming and most important part of making this bike your own. All downhill bikes require constant tweaking and adjustments every time you ride. Of course, you can set it up once and forget about it, but the options for adjustments and improvements are there if you want to pursue a better ride quality. The fork has air, high- and low-speed compression dials, and rebound settings. With the rear shock, you can set compression and sag, low-speed compression and rebound. We could dedicate this whole article to suspension settings. Just know that you can and will be able to set up the Kona Operator for your riding style.

One thing you realize with a 29-inch downhill bike like this Kona Operator is that it is slow on the initial acceleration, but the faster you let it go, the faster it’ll want to go. This bike has a top end that you will never feel on a smaller-wheeled downhiller. The confidence comes from the larger contact patch and better traction. Where it is at a disadvantage is low-speed, tight corners that require pumping and G-force to accelerate. Most of the time you will carry momentum and the 29-inch wheels will be advantageous, especially in ruts and rock gardens where the bigger wheel circumference bridges obstacles better. You really never think about the 29-inch wheel size of the Operator until you finish a section and think to yourself, “That was fast, but I am confident I can hit that section again even faster.” The Operator felt extremely agile and predictable in the air—no surprises.

We decided to do this test old school, since the lift-access areas near us were snow-covered and we didn’t want to shuttle up the mountain. It was a brutal climb. The short seatpost, tall gears and upright position did a number on our backs. But, once at the top, it was on. The downhill started out tight and technical, and the bike felt sluggish through the first few extremely tight and wet 180-degree corners. We should have entered them much faster; the bike could have handled it. The Maxxis DH tires were noticeably heavy on the climb, but now through these turns they felt glued to the ground and demanded more speed. Down through the first rock garden, it was time to let it go. We were confident that 195mm of travel would be far more stable than the 160mm we usually ride with. The 29-inch wheels ate up this section like singletrack. Heading into some jump features, it was the moment of truth. Across the first gap, the rear wheel hung up a little due to lack of speed. This bike is much heavier and longer than a trail or enduro bike, and the travel sucks the speed out of the trail more. So, you have to let it go and stay off the brakes to the next gap. The Operator is at home in this terrain, and it feels comfortable. As we headed into the next rock garden, our confidence kept increasing. The faster we went, the more stable it felt. The more momentum it seemed to carry, the better it responded, and there was no worry about running out of travel. We rallied the entire trail, hitting each feature with more speed than the last. This was not a race. We were simply more comfortable and more confident at higher speeds. We rode our Kona Operator with box-stock 29-inch wheels in the longer-reach setting with proper suspension tuning on the shorter chainstay-axle option. The more it was pushed to its limits, the better it felt.

Suspension will always be the key to getting the most from your downhill bike. There are so many available setups for this bike, and the only way to discover what is right for you is trial and error. With options such as a longer wheelbase, shorter reach and even smaller wheels, you can customize the Operator like never before.

The Kona Operator did not disappoint with its mid-level SRAM parts. You could gain some bragging rights with lighter, more expensive parts, but unless you are racing World Cups, you probably won’t notice the performance difference. With its carbon frame, RockShox suspension and branded components, this bike is a great value. Kona has been a mainstay in the gravity market for a couple of decades, and the engineers used all that experience to create a truly capable downhill bike. 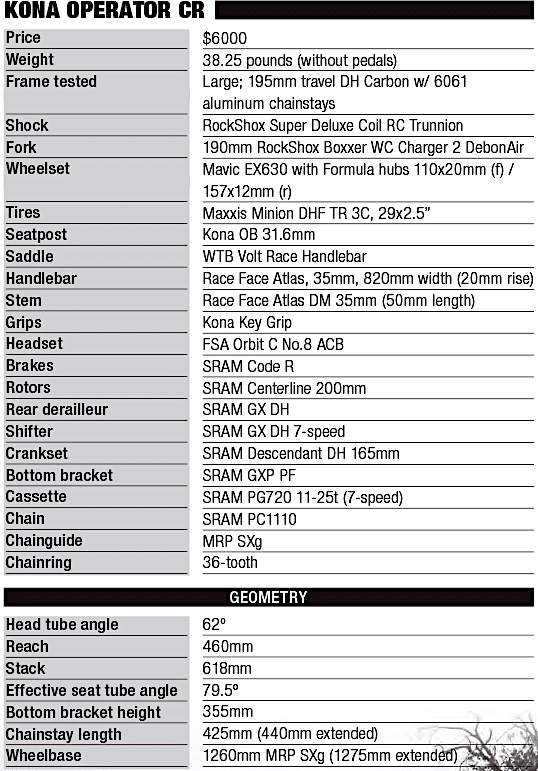