In 1964, KTM made its first bicycle. In fact, since then, the Austrian brand that’s more known for its motorcycles has actually built millions of pedal-powered bikes. Unfortunately for the American rider, KTM bicycles have only been available in Europe—until now. For 2015, KTM’s lineup will be available to riders worldwide. Until the 1990s, KTM bikes and motorbikes went hand in hand, but to rescue the brand after the bankruptcy of KTM Fahrzeugbau AG in 1991, both branches were separated into different companies and remain entirely separate entities. The only thing they share is the logo. 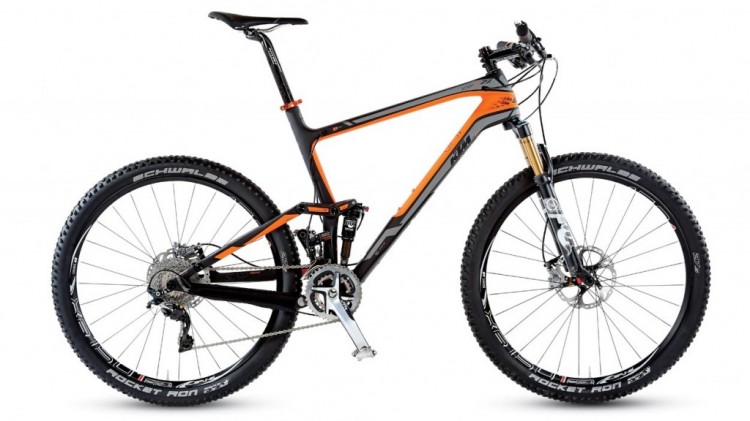 KTM’s bikes embrace the newest technologies on the market, including refined suspension designs and progressive geometries. Their bikes are built entirely around the newest 27.5-inch and 29-inch wheel sizes.

WHO IS IT MADE FOR?
The Scarp is a race bike through and through. The tight geometry and short-travel suspension make this a fast bike that, according to one test rider, is “nimbly bimbly like a squirrel in a tree.” The 27.5-inch wheels keep this bike feeling more nimble than a 29er with the same travel, but don’t let the “tweener” wheels fool you. This bike is all about pedaling efficiency and speed. 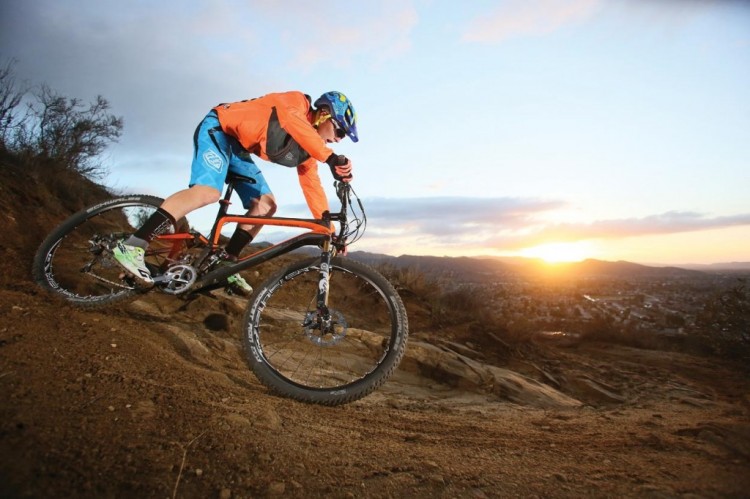 WHAT IS IT MADE FROM?
The Scarp is built from carbon fiber front to back and uses a modified single-pivot suspension design to achieve the 105 millimeters of travel. The Scarp is built with all the industry standard amenities, including a 12 x 142 millimeter dropout, tapered headtube, and internal cable routing throughout. The signature black and orange paint scheme is something we would expect from the Austrian company.

WHICH COMPONENTS STAND OUT?
The bike is built using a top-end inspiring XTR complete package, and although our test sled came with the mechanical version of the components, it came loaded with all the wiring harnesses necessary to support Shimano’s Di2 group. 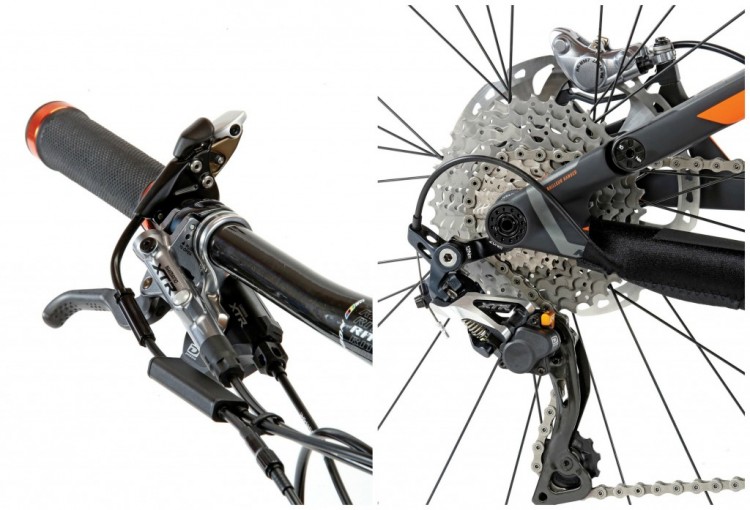 HOW DOES IT PERFORM?
Setting sag: The simple, air-sprung, CTD remote suspension makes the KTM a breeze to set up. Simply air the shock and fork so the bike has between 20 and 30 percent sag and hit the trails.
Moving Out: The Scarp is a fairly traditional-looking full-suspension frame with a large-looking front triangle mounted to a rocker and single-pivot suspension design. This provides a roomy front triangle that’s lightweight and stiff and has enough air to comfortably fit a full-sized water bottle on the downtube mount. The design puts the shock at a great distance, making it difficult to reach on the fly, which makes the remote damping control an attractive feature. The roomy front triangle also places the top tube fairly high, reducing the standover height. Most riders will have no quibbles with this, but those between sizes could have issues with finding a proper fit.
Climbing: The sub-24 pound Scarp floats uphill with ease. That was not a surprise to the testers who rode it. What surprised us was when the active suspension and nimble-feeling 27.5-inch wheels allowed us to charge up some very technical terrain. Not only is the Scarp capable on long grinder climbs, when efficiency and weight are king; this bike is also capable when the ascents are technical and rocky. The moto roots show through here. As long as your legs have the gas in them, the Scarp will get up almost anything. 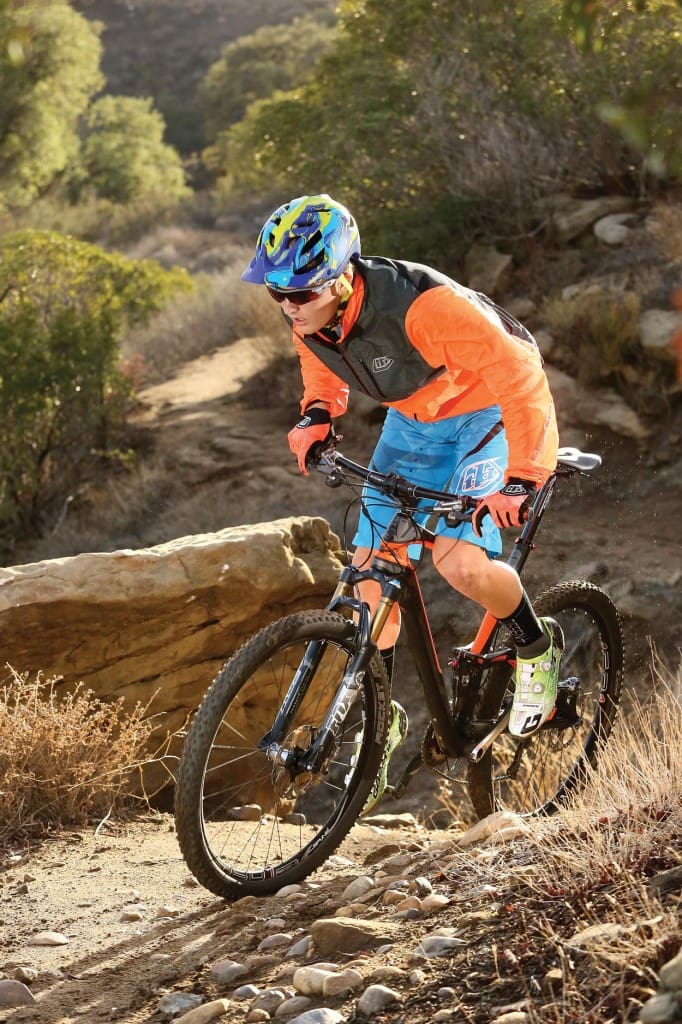 Cornering: This is a quick and nimble bike that enjoys smooth flowing trails, tight but smooth switchbacks, and anything a cross-country racecourse can throw at it. Technical corners are a bit of a challenge, but after a bit of a honeymoon period, the Scarp will deliver confidence on all but the most technical of terrain.
Testers noted some flex in the frame under hard cornering that detracted from the bike’s otherwise solid handling manners. While this won’t be a deal breaker for flyweight racers, more aggressive riders may find this trait a major drawback. Fortunately, though, the bike’s dialed geometry, suspension and impressive light weight work flawlessly to make up for it.
Descending: The razor-sharp geometry of the Scarp will be right at home on any cross-country loop. This is a Formula-one car rather than a trophy truck, and, as a result, the Scarp needs a talented pilot to guide it down the trail with confidence. Riders coming from a hardtail background will likely find confidence in the Scarp’s capable and active suspension, which is forgiving whether the rider is on the brakes, on the pedals, or simply coasting; however, riders used to a true trail bike will feel like they’re holding on for dear life when the trail gets nasty. This is a race bike first, and it should be treated as such.
Braking: The single-pivot suspension design should exhibit brake jack and pedaling feedback on paper, but our testers did not note this anywhere. The bike has a plush feel that will send you fast into the corners. The Shimano XTR brakes will stop you with confidence, but the lever felt relatively inconsistent on long descents. The XTR Race brakes felt snappy and stopped with ease, except when we needed them most. On long and technical descents, we weren’t sure if the lever would be on a hare trigger or pull halfway to the bar before engaging the pads on the rotor. 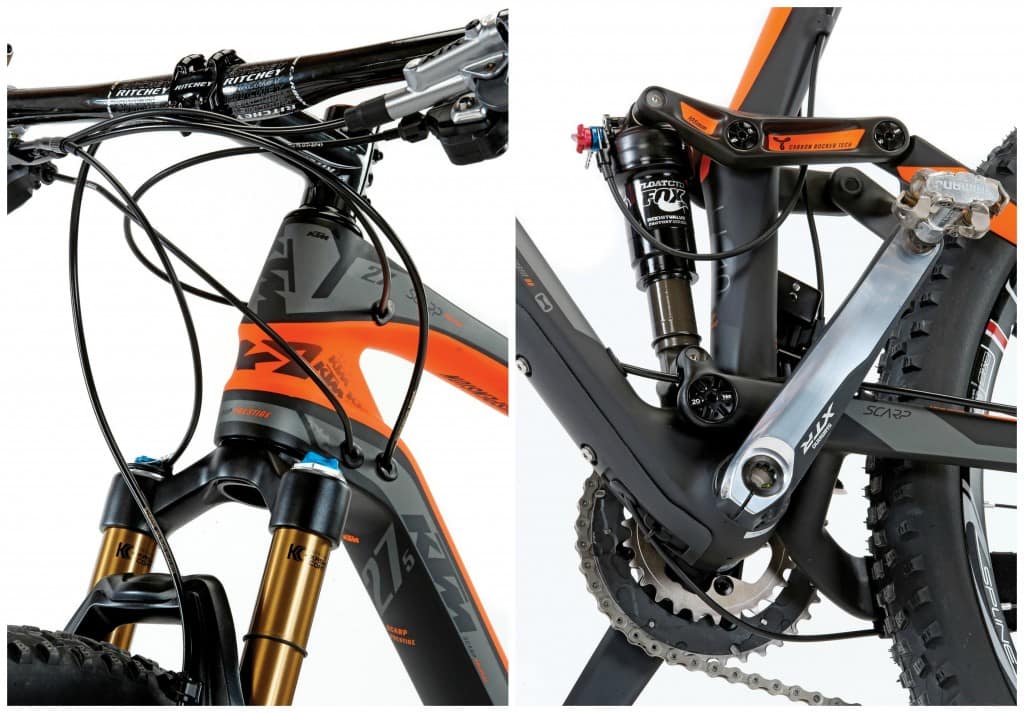 Extended test period: After six weeks of testing the bike in typical cross-country riding conditions and encountering no problems, we took the Scarp on some of our more difficult all-mountain trails. In doing so, our crew caused a cracked chainstay that quickly put an end to our testing. We contacted KTM, and they assured us this was not a problem they had seen before, and rushed us a replacement rear end for the bike. Building a super-light-weight part always means compromising strength somewhere. The Scarp Prestige held its own on the cross-country laps we initially tested on, but in true wrecking crew fashion, we found this bike’s limit on our more difficult trails. Thankfully, KTM stepped up to support their product, and we were able to be back on the trails in less than 48 hours after the incident. 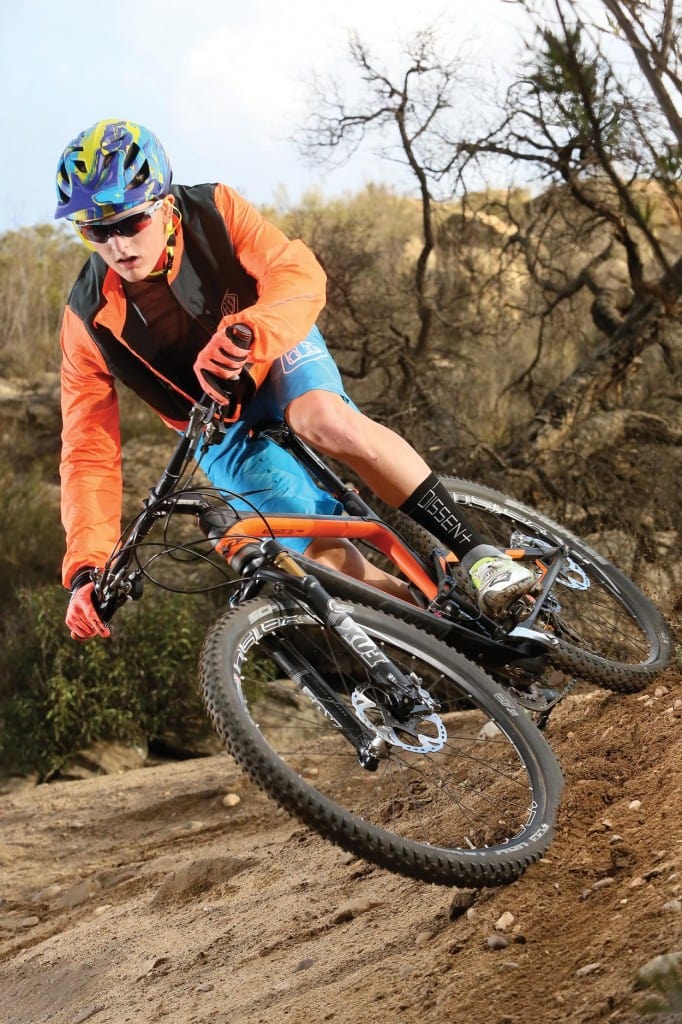 TRICKS, UPGRADES OR TIPS?
Fox’s CTD remote lever is very necessary on the Scarp. The shock is all but out of reach without a remote switch; however, it’s no easy task to mate the lever to the rest of the handlebar controls. Fox’s remote lever is improved over the first generations, but the ergonomics of the current version are not great. The lever works relatively well but feels and looks less refined than the rest of the bike. Also, since the lever activates both the shock and fork simultaneously, riders don’t have the option to run the fork and shock in different modes, limiting the tuning options.

BUYING ADVICE
This bike is race ready right off the showroom floor. From the dialed frame and suspension design to the complete XTR drivetrain and brakes, to the lightweight wheels and tires, this thing screams speed. Our testers had a smattering of small complaints, including a bit of frame flex and a geometry that could be tough to fit for some riders; however, the sum of the parts make for a bike that’s impressive to ride, especially on fast and rolling trails—and even more so if the trail is a racetrack. 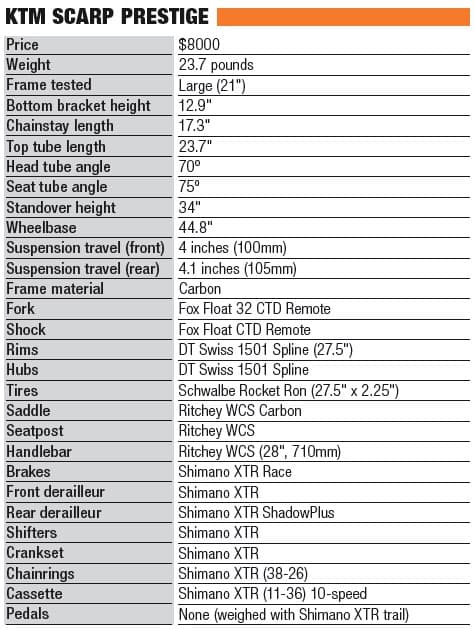 Photo of the Day: Jeremiah Bishop at the Absa Cape Epic