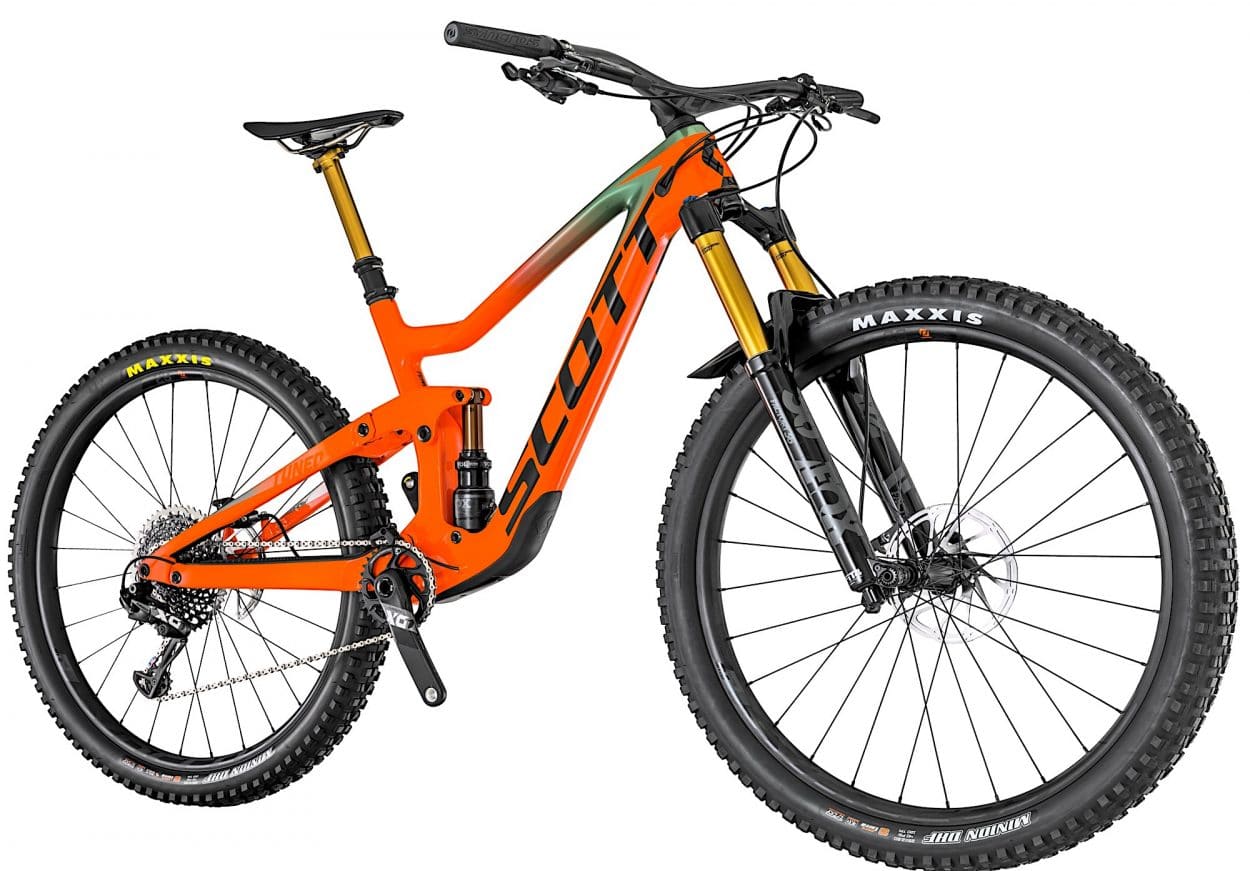 In 2006 many bikes with 160mm of travel were designated downhill bikes. Scott changed riders’ opinions of what a trail bike could be. Enduro racing wouldn’t become a household word for a few more years, so the Ransom couldn’t be properly categorized. Fast-forward 13 years and Scott is at it again, taking downhill technology and combining it with a climbing component. This blend creates a bike made to go almost anywhere. The Ransom is a long-travel shredder built to tackle rough descents without breaking a sweat. It also retains the ability to climb. This month the wrecking crew set out to see if Scott’s new bike was worth paying a ransom for. 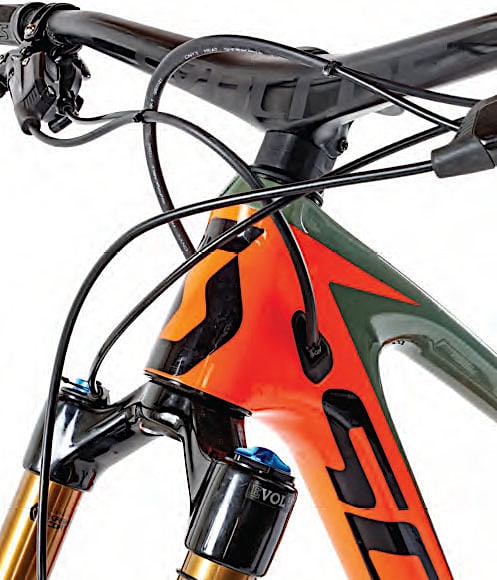 The 2019 Ransom is the strongest carbon frame that Scott has produced to date. Stiffness is achieved through layering and reinforcing the carbon with a focus on weight savings. An integrated frame protector runs from beneath the bottom bracket along the underside of the downtube to protect the carbon material from flinging rocks and unexpected impacts. Scott also included a chainstay and seatstay protector that keeps the chain from scarring the frame in addition to keeping that annoying chain-slap noise to a minimum. The Ransom is versatile and can be converted from a maximum tire size of 27.5 × 2.8 inches to 29 × 2.6 inches using the Flip Chip and swapping wheels. The Flip Chip changes the bottom bracket height using a reversible spacer that can be removed, flipped and replaced in about one minute. 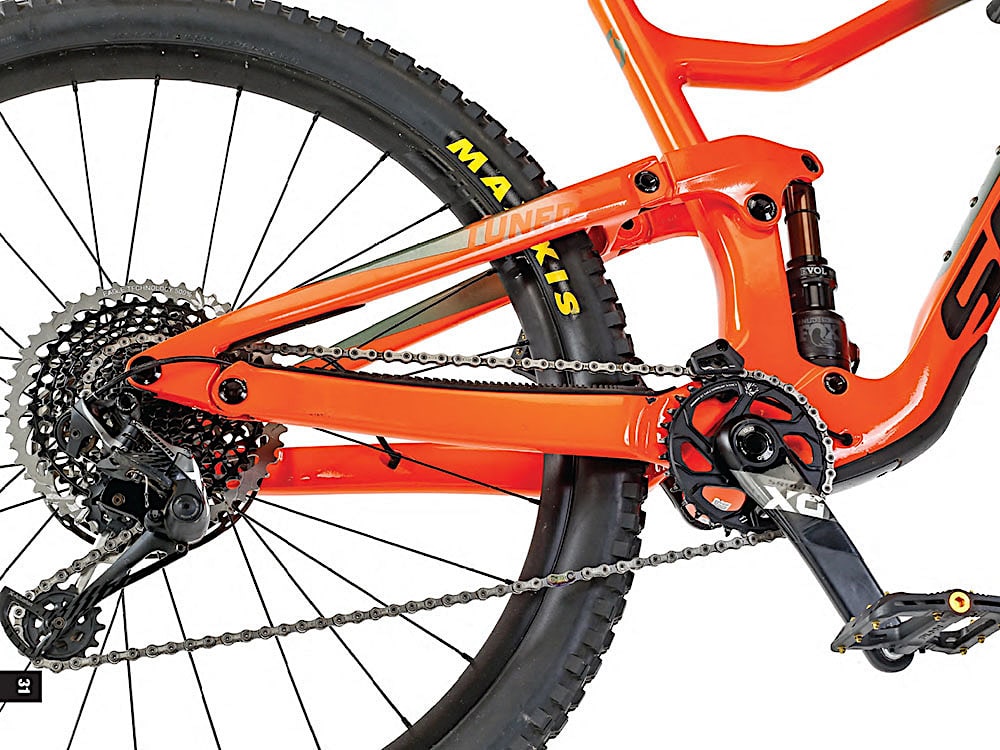 The most obvious and unique component on the Scott Ransom is the integrated bar stem called the Hixon. The bar is 800mm wide with a 20mm rise and a virtual stem length of 50mm. It took a full ride to become comfortable with this unusual setup, but after that it seemed almost natural and absolutely welcome. Any product on a bike that you don’t have to think about is usually a good component, especially a saddle after a long ride. That is the case with the all-new Syncros Tofino 1.5 saddle. We always appreciate a stock bike with a comfortable seat. We are not usually big fans of lockout systems. In the case of the Ransom, however, we will make an exception. We used the TwinLoc Suspension System as much as the dropper post. We came to rely on the stiffer suspension setting while pedaling, as well as the elevated bottom bracket. It was a game-changer and an absolute necessity after we got used to it.

Setting sag: At 30 percent the bike still felt spongy, but it isn’t a cross-country bike, so we figured we’d run that on the first go. At the end of the ride we had pushed through the entire stroke a few times but never realized it. With all the firmness settings available between the ramping and traction control, it is nice to have the plushness when it is fully open. So even after experimenting with different air pressures, we found our original setting worked best after all. 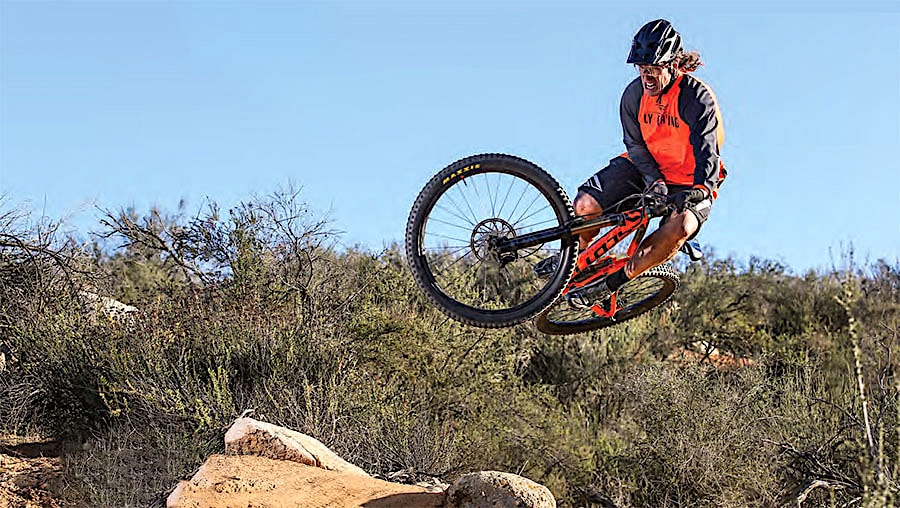 Moving out: It is truly hard to believe that you can take a 170mm bike and climb trails that you would only take a lift or shuttle up just a couple of years ago. The first ride on the Ransom was a 1600-foot climb on fireroad and rocky double-track. There were a few sections that had as much as a 26-percent grade. With the traction-control setting, it felt like being on a trail bike with big tires. This was a good sign. We knew that this bike was more than capable of handling our descent. It took most of the climb to get used to looking at the bar/stem combo. Visually, it seemed like the bars were crooked both ways. You need to be open-minded and willing to accept them. By the top of the climb, about an hour into the ride, they became familiar. By the end of the ride, they actually felt comfortable. Not being able to roll the bars to change the sweep and wrist angle was the only downfall.

When the descent began, it was time to drop the seat, disengage the traction control and let it go. After two turns, the Ransom felt familiar and capable of everything we threw at it. The cornering felt sharp and precise, but it didn’t feel like it was on rails. Instead, it had the comfort and freedom to point and shoot. The Maxxis tires are amazing and complemented the geometry, allowing the bike to sit in the turns and explode exits without breaking loose.

Climbing: Technology over the last decade has made bikes more versatile than ever. The Eagle drivetrain, with its wide range of gearing, is one of the biggest assets on the Ransom. This, along with the suspension Traction Control feature, is a complete game-changer. The most noticeable drawback when climbing was the weight of the 2.6-inch-wide tires. Body position felt proper, even on long and steep climbs. Granted, it isn’t a cross-country rocket ship, but it is efficient and capable of taking you anywhere you want to go. The Ransom scaled up the most technical climbs without hesitation. We found it more capable of going up steep, rutted-out, rocky trails than some cross-country machines due to the more compliant suspension and grippy tires. Of course, it comes at an energy cost, but it is absolutely capable when you’re feeling froggy. 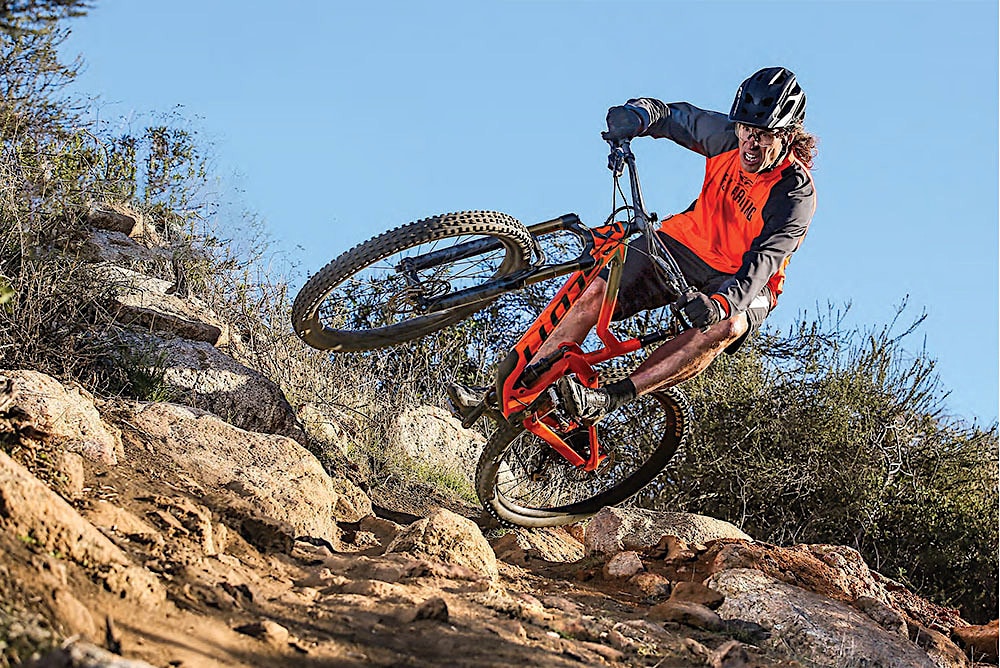 Cornering: More than anything, the Ransom loves the berms. The harder you push it into a corner, the more it wants to rip. The way it sits down in the corners with all your weight centered on the cranks is the key. It is balanced so well, and the steering matches up perfectly with the long wheelbase. It gives you a comfortable, calm feeling and allows you to relax, knowing there will be no surprises. It drifts well on hard-pack and is predictable, never feeling like the front end wants to push away from you. The bottom bracket height with the 27.5-inch wheelset is spot-on, with plenty of pedal clearance from the ground. 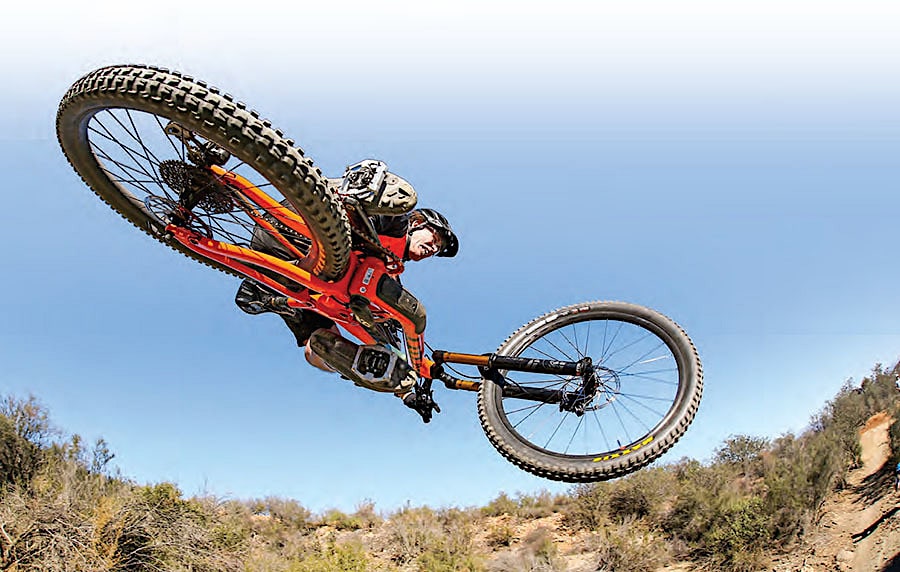 Descending: The Scott Ransom is a wicked-fun bike, and it would likely take a full riding season to even begin to discover its true limits. The steeper and rockier the terrain gets, the more the bike protects the rider. It allows a mediocre “free-rider” to ride way beyond his limits. Thirty-foot road gaps were soaked up like sidewalk curbs. The suspension can be set up for any terrain, from rock gardens to big drops, with one twist of the ramping lever on the shock. It is a bike that is difficult to poke holes in, as it’s more capable than most of the riders who will be on it. The trick is to get the suspension dialed in for your riding style and ability. After that, it is pretty much point and shoot down the hill.

Our biggest complaint are the controls for the dropper post and traction control levers. Ideally, we would prefer they be away from the grip with the dropper lever below and traction control above. Riders will either love or hate the Hixon bars initially, but we believe they will grow on most. If not, it’s an easy swap. The Syncros products absolutely complement this build. From the tires to the grips, there are very few actual upgrades needed.

The Scott Ransom is a bike built for aggressive descenders who don’t shy away from climbs. It’s ideally suited for riders who want a bike they can race an enduro on one weekend and hit the bike park with the next. You can’t expect this long-travel machine to fly up the mountain, but you can sure bet that it will fly on the way back down.

The Kids are Taking Over at Sea Otter 2019