The debate over 27.5-inch versus 29-inch wheels is an intense one. You can argue forever about which wheel size is superior overall, but the reality is, each size has its strengths on the trail. Whether you are riding trail, downhill or, in this case, aggressive cross-country, there is a size that will suit your style of riding. This shootout focuses on comparing the wheel sizes of two bikes that have almost identical geometries and the same quality of carbon built into the frames. There is no better platform to test on than an aggressive hardtail if you really want to feel the subtle differences between 27.5-inch and 29-inch wheels. The Scott Scale 700 RC and Cannondale F-Si Carbon 2 are two of the most advanced hardtails available and have proven to be top performers in their fields. We brought both of them into the MBA test fleet to see which one would reign supreme. 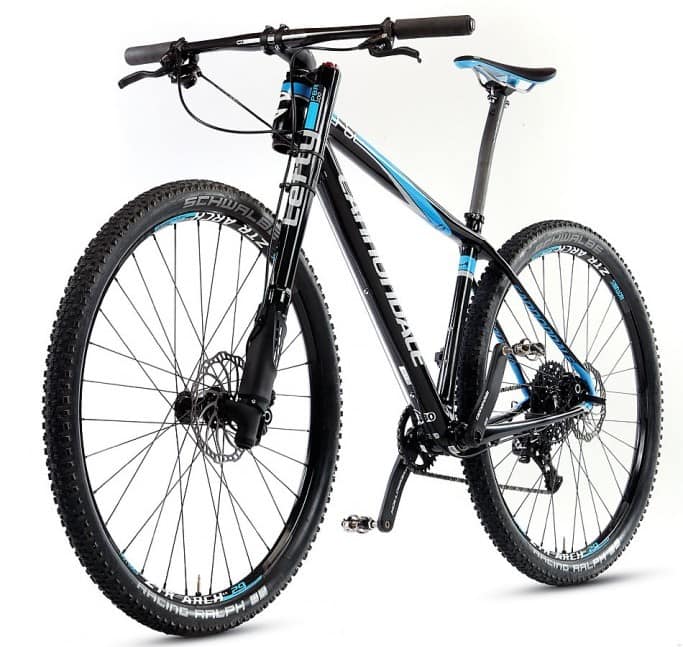 A smooth ride: The F-Si is one of the smoothest-riding hardtails we have ever ridden. Between the 29-inch wheels and Speed Save rear triangle, we could feel the bike damping rough sections of trail. 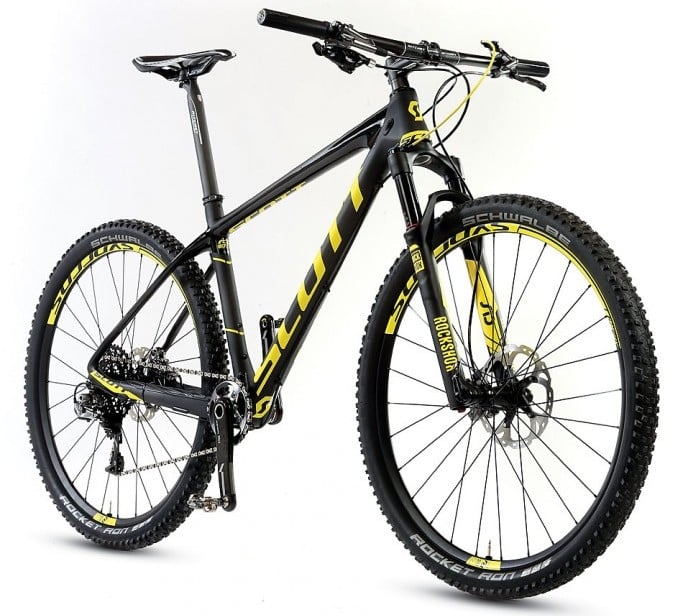 The lightest of the light: Scott has put themselves at the forefront of building light bikes, and the Scale RC is a prime example. This isn’t even their topend build, and it came in under 20 pounds.

Both of these exceptional bikes are designed for aggressive cross-country riders who are looking for every ounce of efficiency they can get from two wheels. While each bike has specific fea- tures that will appeal to different types of cross-country riders, both are very capable. The Scale is one of the lightest bikes we have tested in a long time and plays to the weight-conscious rider. The F-Si boasts complex engineering that will appeal to the rider looking to try something built on a creative platform. The Scale 700 RC comes in at $6500, while the F-Si is valued at $4870. 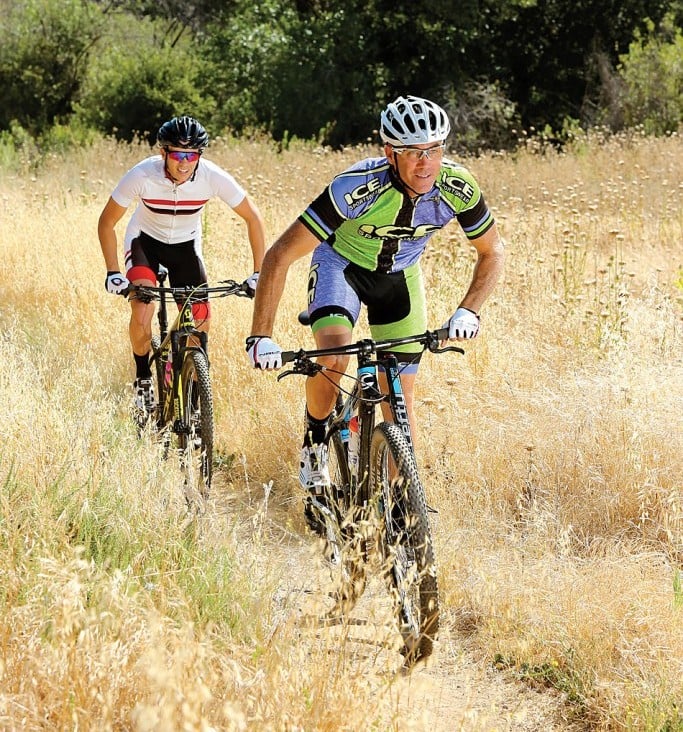 WHAT’S IT MADE FROM?

The Scale and F-Si are both high-end carbon frames that are just as light as they are stiff. Scott uses its HMX carbon layup to increase frame stiffness and still provide a smooth ride. To complement the carbon, Scott uses a Shock Damping System (SDS) with flattened seatstays to absorb some of the imperfections of the trail. The Scott uses a standard tapered head tube and thru-axles on the front and rear to make the frame plenty stiff. The Scale has a very slack head angle of 69 degrees and 16.8-inch chainstays. 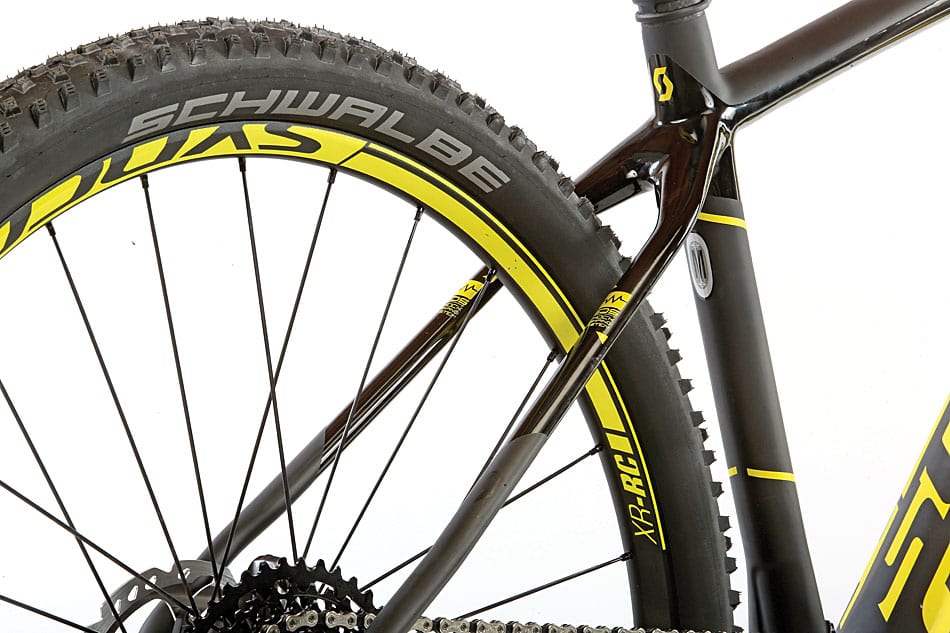 Built-in compliance: The 27.5-inch wheels didn’t roll over ruts and other obstacles as smoothly as the 29-inch wheels. To offset this, Scott flattened out the seatstays to give the rear triangle more compliance over the rough stuff. 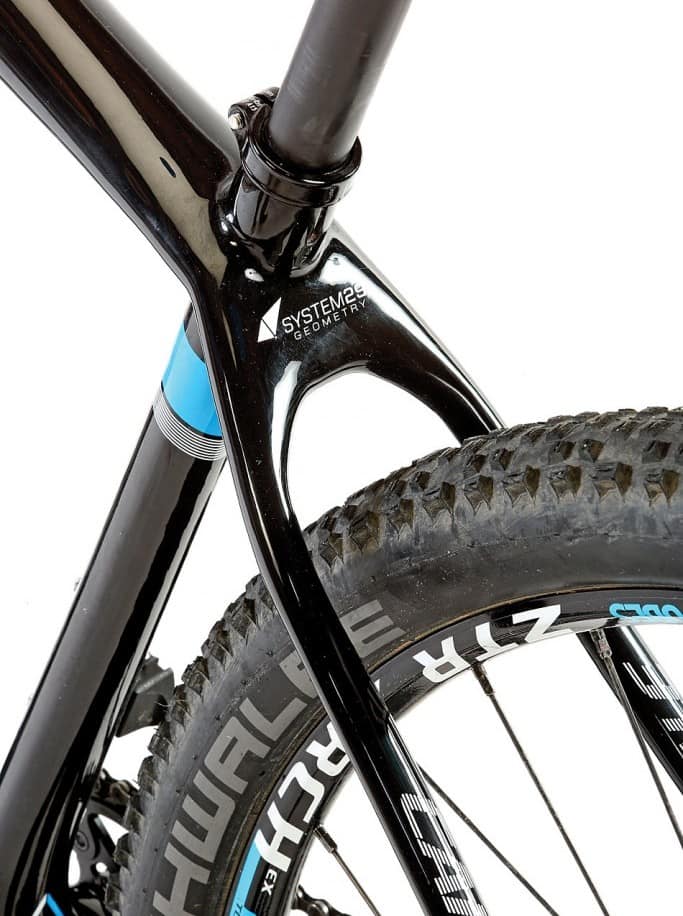 Competing compliance: A major complaint of hardtails is the rough ride that comes along with them. Cannondale uses their Speed Save rear triangle to soften the trail and give riders more comfort on long days.

The Cannondale uses a Ballistic Hi-Mod carbon frame that is strong but lightweight. For compliance, the frame has Speed Save chain and seatstays that allow the frame to better absorb rough parts of the trail. The defining feature of this frame, however, is the System 29 geometry. This geometry is a game-changer, as it slackens the head angle to 69.5 degrees and brings the chainstays in. Part of this is attributed to the 55-millimeter offset of the Lefty 2.0.

At first glance the Lefty 2.0 on the F-Si really catches your eye, and it is even more noticeable on the trail. The Lefty works— and it works very well in the cross-country arena. With the fork locked out, the front end felt like it had a rigid fork on it. On long descents, the bike held aggressive lines and flexed much less than with other forks we have used in the past. Complementing the Lefty are the Magura MT6 brakes. They have a huge range of modulation and are very well-suited for cross-country riding, especially with the reduced weight. 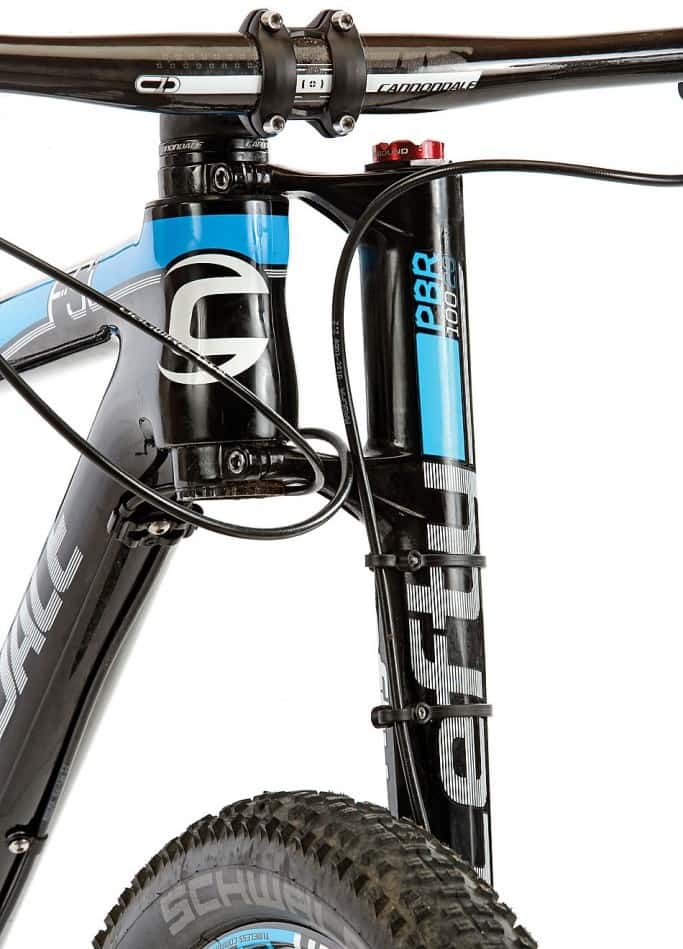 One of a kind: The Lefty has been around for over a decade and has become a front runner in the cross-country scene. Cannondale created the Lefty 2.0 specifically for the F-Si, to give the bike a slack geometry that rips any descent.

The Scott also had a very impressive build kit that included a set of XTR Race brakes, and the RockShox SID RL3 fork with remote lockout was a huge standout. Scott uses its own damper in the SID to give the fork three different settings, all of which are accessible via a remote lockout. The Syncros XR RC wheels were incredibly light and stiff, but they did flex a little bit on rough sections, which was a welcome feature given the stout seat tube and chainstays. 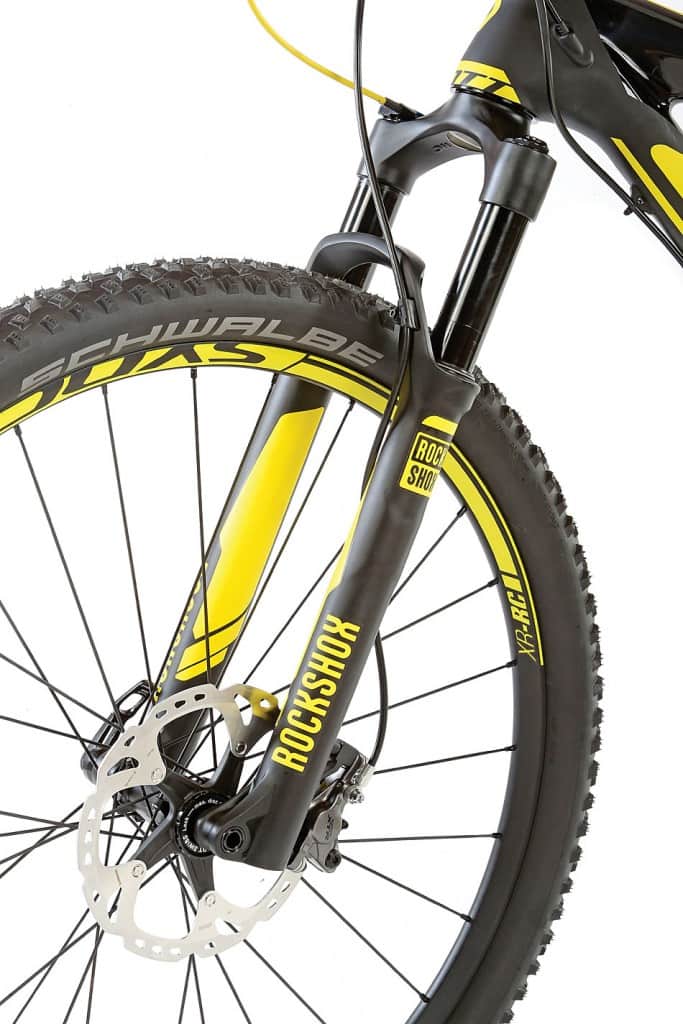 Keeping with the weight: To complement the reduced frame weight, Scott put a RockShox SID on the front end. The light front end and smaller 27.5- inch wheels made the front end very nimble and easy to manipulate. 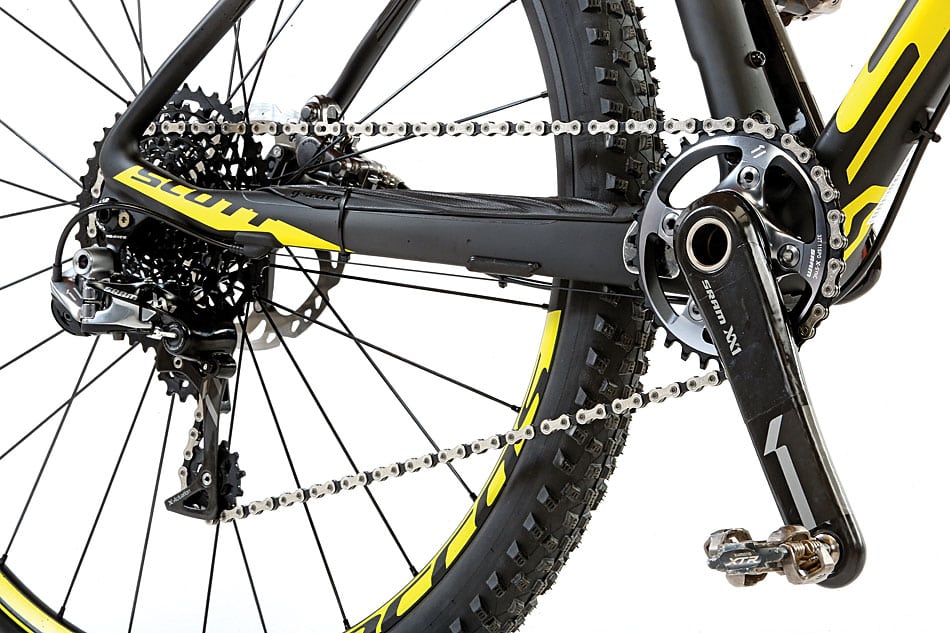 Fast Build kit: 1×11 is quickly becoming the only way to ride these days. The F-Si and Scale came with similar drivetrains, which gave our test riders a sense of familiarity when transitioning between bikes.

HOW DID THEY PERFORM?

We would be lying if we said that we didn’t enjoy both bikes. The small wheels and light weight of the Scale allowed us to throw the bike around easily, while we were blown away by the geometry and engineering of the F-Si. We were eager to try for personal records on some of our favorite cross-country loops on the Scale. Given the low weight and smaller wheels, we assumed the Scale would rip down any descent we threw at it. After the first handful of rides, we were pretty convinced the 27.5 could hold its own in the cross-country scene. The small wheels were fun to ride, especially on descents. Tight, technical singletrack made the 27.5 wheels feel at home and roll efficiently, but the smaller wheels didn’t carry their momentum nearly as well on long, sustained climbs and required more energy to keep rolling. The first race we did on the Scale was a relatively flat race that required a lot of pedaling. In a field filled with 29ers, the Scale held its own but required more work from us. 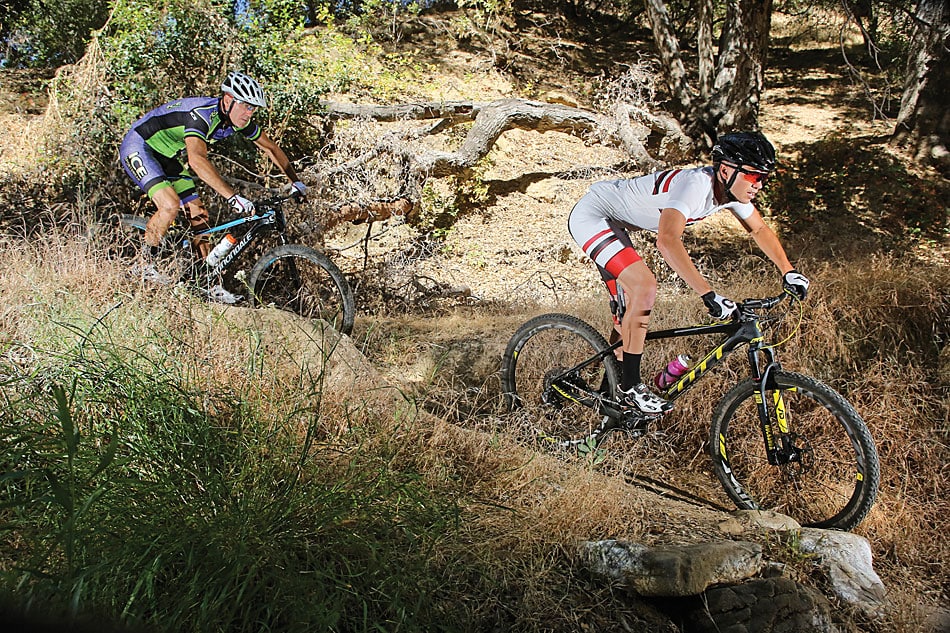 It was surprising: After spending quite a bit of time on different types of trails, we were surprised as to which bike came out ahead on the descents. We had to put aside our presuppositions on wheel sizes to get a true feel for the bikes.

Initially, the F-Si seemed like just another hardtail 29er, but after riding it for a bit, we realized that it was a whole different animal. The F-Si doesn’t ride like your typical cross-country race bike. It’s playful and fun but gets serious when the racing gets real. The geometry and offset of the Lefty made this bike ride unlike any other hardtail we have ever tested. Our times on descents weren’t what you’d typically expect from 29er wheels. The reduced trail on the Lefty 2.0 makes the front end stable and, more important, nimble. 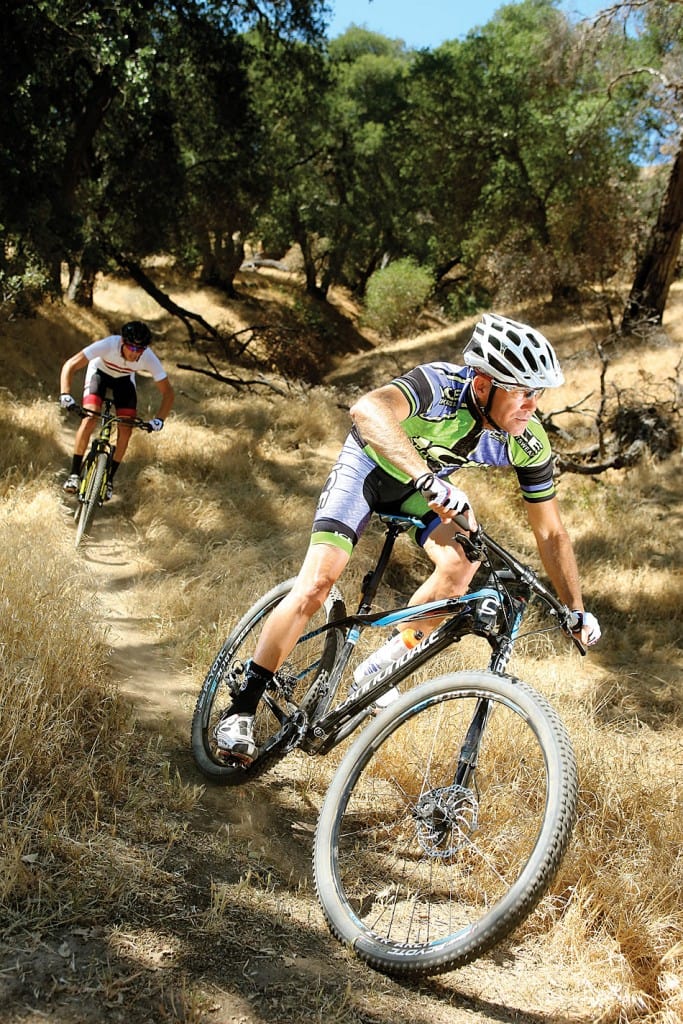 Will it turn right? The Lefty 2.0 is an eye-catcher and will turn heads, no matter where you are. Just because it’s a Lefty doesn’t mean that it won’t do everything that a traditional fork will.

The F-Si doesn’t use a thru-axle in the rear, which at first seemed like a negative, but after spending time on the F-Si, we appreciated having a more compliant rear triangle. To compensate for the lack of a thru-axle, Cannondale offsets the drivetrain, which gives the rear end more stiffness when the rider is pedaling out of the saddle. This is also a downside, though, as any aftermarket wheel would have to be built to this offset spec. 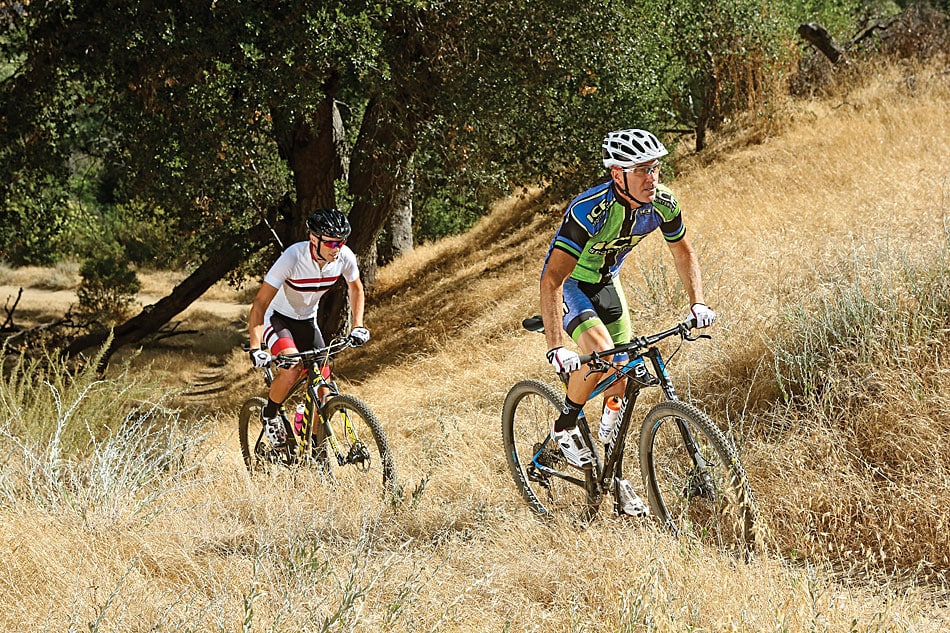 Climbing for days: Both bikes excelled on the climbs. The reduced weight of the Scott made it easy to push uphill, while the bigger wheels of the F-Si carried their momentum with ease.

Our biggest complaint with the 27.5-inch wheels was how easily they got caught in rough sections of trail. The rear wheel tended to magnify rough patches instead of gliding over them like the 29-inch wheel. This is one major factor that puts the 29er ahead of the game when it comes to cross-country riding.

The Scott Scale has a pretty impressive build kit that doesn’t need much upgrading, but if there’s one area that needs help, it’s the cockpit. Scott uses a Ritchey WCS C-260 stem with T20 bolts on the faceplate and pinch bolts. The T20 bolts were a nightmare to work with and are about as uncommon (and pointless) as putting cement in your tires instead of sealant. We also didn’t enjoy the grips that came stock on the Scale. The rubber was hard and offered little padding, which was a problem given the stiffness of the Ritchey bars.

We tested the lowest level of Cannondale’s builds, but the Carbon 2 could hit a new high with lighter wheels. The Stan’s ZTR Arch felt flimsy and was heavy, which took away from the F-Si’s climbing ability. Also, we could see the modulation of the Magura brakes being an issue for some riders who are looking for quicker stopping power. Cannondale uses a 700-millimeter C1 carbon bar on this model, but we would have appreciated a slightly wider bar, given the downhill capability of the F-Si.

We understand that there are many points of view when it comes to wheel sizes, but in the end, Cannondale designed the F-Si to silence those who say that 29ers can’t be nimble or descend like 26ers. After all, the 26er is the gold standard for nimbleness. If you are looking for every bit of efficiency that you can get from a hardtail, then the F-Si should be a serious contender. 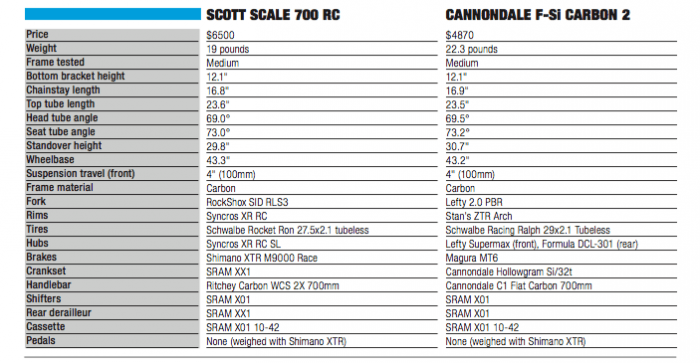 Photo of the Day: John Tomac at Mammoth Mountain