For years, the Enduro has been the go-to whip for those desiring a burly all-mountain workhorse designed around Specialized’s FSR suspension; however, with Specialized’s reluctance to enter into the 27.5-inch wheel market over the last couple years, committed Enduro riders were left wondering if they’d be forgotten as their friends upgraded their trusty steeds to a 27.5-inch version. In the end, market demand was impossible to ignore, resulting in the Stumpjumper FSR 650b being released in the spring of 2014 and the Enduro 650b only a few months later. Regardless of Specialized’s previous stance, we know from years of testing that Specialized only sets out to create one thing: the best bike for the job. With S-Works lettering spanning the down tube of our test sled, we were prepared to test what had the potential to be a truly sweet bike. 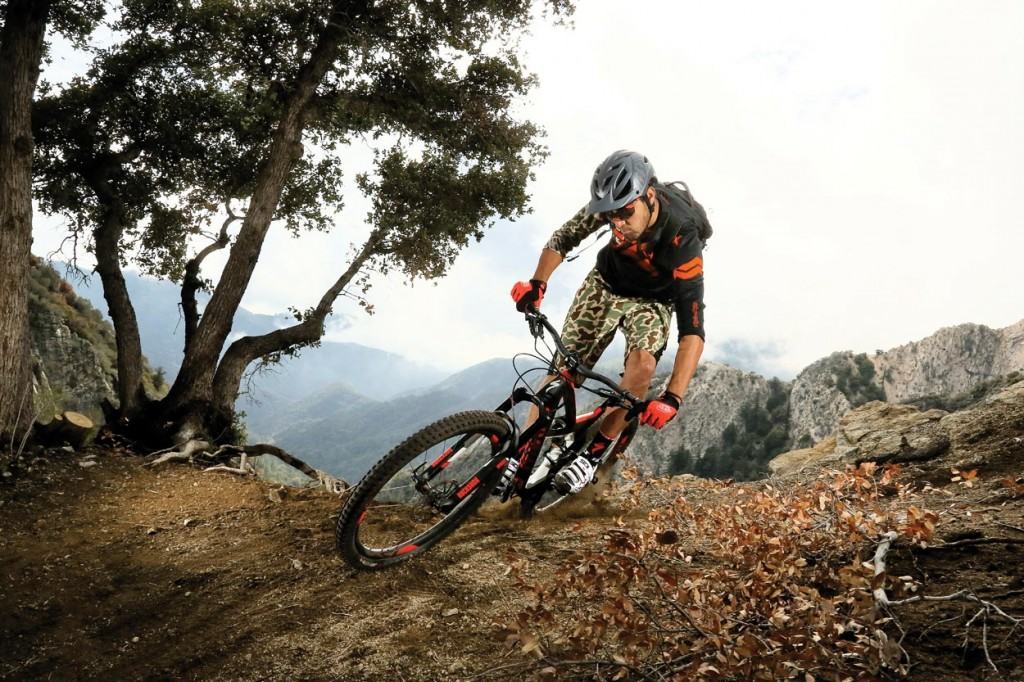 The Enduro line is made for the rider who desires a descending machine that won’t be dusted out by downhill bikes but still has the ability to climb out of a canyon at the trail’s end. While it’s certainly designed to tackle both climbing and descending, there’s no doubt the Enduro favors descents. The S-Works model we tested is made for the rider who wants a no-holds-barred rocket that’ll feel like cheating on the climbs and be Velcroed to the trail on descents. It isn’t made for the rugged trail rider who wants to have peace of mind while watching his bike tomahawk down the trail; it’s designed with speed and control in mind. 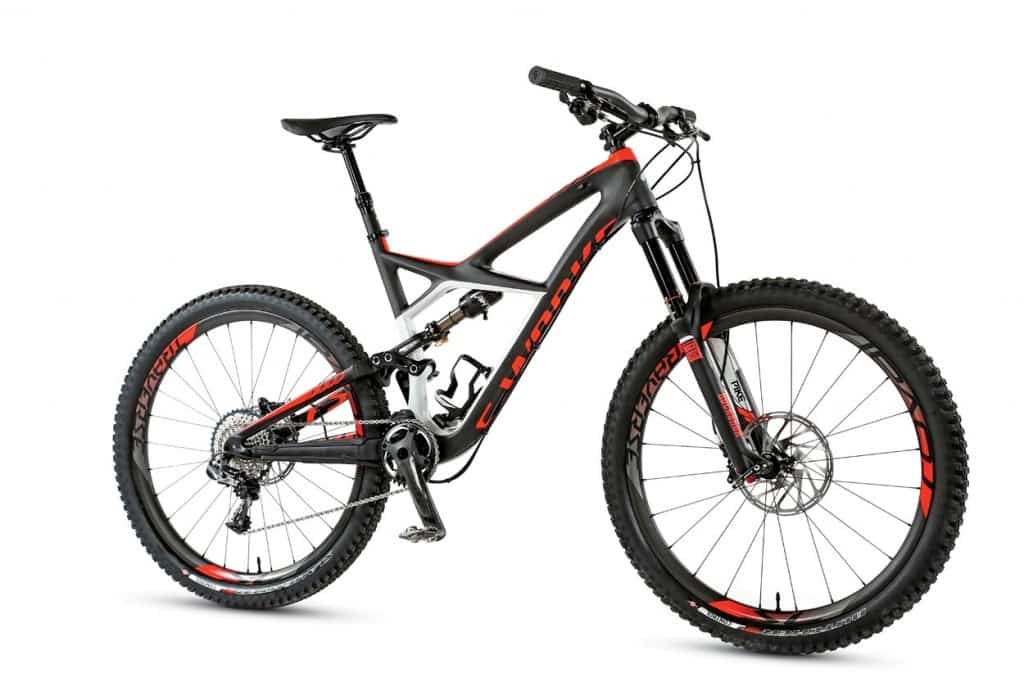 Though the bike is built atop 27.5-inch wheels, Specialized used the front triangle from its 26-inch model of the previous year as a base. As is the trend with other companies transitioning from 26 to 27.5-inch designs, it’s safe to assume Specialized will be debuting a completely redesigned front triangle with time, but until then, it doesn’t hurt to build atop tried-and-true geometry. That being said, the rear stays and suspension linkage have been completely redesigned to accommodate larger wheels, along with the full range of suspension travel in the frame.
The front triangle on the S-Works model is constructed from FACT IS-X 11m carbon, while the rear stays and linkage are M5 aluminum alloy. Its X-Wing frame design accepts a PressFit 30 bottom bracket, utilizes cartridge bearings throughout the linkage, offers internal cable routing for a stealth dropper post and has 142-millimeter dropouts.

WHAT CAUGHT OUR EYE?

The black and white frame, accented by what Specialized calls “Rocket Red,” makes the S-Works Enduro pop unlike any bike we’ve recently tested. The Rocket Red not only looks as if it’s always screaming with speed, but it’s also specially formulated to become darker with prolonged exposure to sun, unlike traditional neon formulas that typically fade with extended exposure. SRAM Guide RS Carbon levers offer the reliable modulation we’ve come to love from Guides in an incredibly lightweight package that’ll fit right in on race day. The SRAM XX1 drivetrain, complimented by the S-Works carbon cranks, allows us to feel confident the ride will offer crisp shifting with lightweight and efficient power transfer. Even with a quick glance at the bike, smooth and orderly are the thoughts that come to mind. Saying it charged in an orderly manner wouldn’t be doing it justice, but it certainly presents itself with an orderly elegance.

Moving Out: Specialized does quite a fine job of delivering bikes shred-ready, but we had to give our S-Works Enduro a little extra love. The stealth-routed Command Post IR requires precise cable adjustment, and we had to make a few trailside adjustments to get it dialed in correctly. Cane Creek shocks offer incredible performance when properly tuned, but many riders never take the time to ensure they’re utilizing all of their capabilities. We repeatedly rode a familiar loop with varied terrain to make sure we were confident with our specific tune, which allowed us to take full advantage of the strengths of the Cane Creek DBinline.
Climbing: Developed for enduro racing, the S-Works Enduro has no trouble reaching the top of the mountain; but, even with its minimal weight, it won’t be doing so in record time. As long as we remained seated, the Enduro would climb all day with ease. The carbon Roval Traverse wheelset, with its lightweight tubeless system, brought the rotational weight down to a minimum. The experience was considerably different, however, once we were forced to stand up through a punchy climb, in which case the bike would push through the suspension with very little resistance.

Cornering: We found ourselves braking less into, and feeling more confident in, the same high-speed corners that typically put us on edge. Hitting corners at high speeds, the FSR suspension sits in a range of travel that feels stable and reliable. On flowy, wide-open descents, the stiff carbon Roval Traverse wheelset flowed through swooping sections of trail with grace and ease. Pairing a Specialized Butcher tire in the front with a Slaughter in the back provided the bike with nearly perfect traction, regardless of whether we were riding atop the rocky trails of Tahoe or in the loose-on-hardpack conditions of Southern California. The only downside of the tires was that the sidewalls of the Control tires lacked the stiffness of Grids, leaving the rear end feeling like the tire was folding beneath us, or even flatting, as we leaned hard into corners. 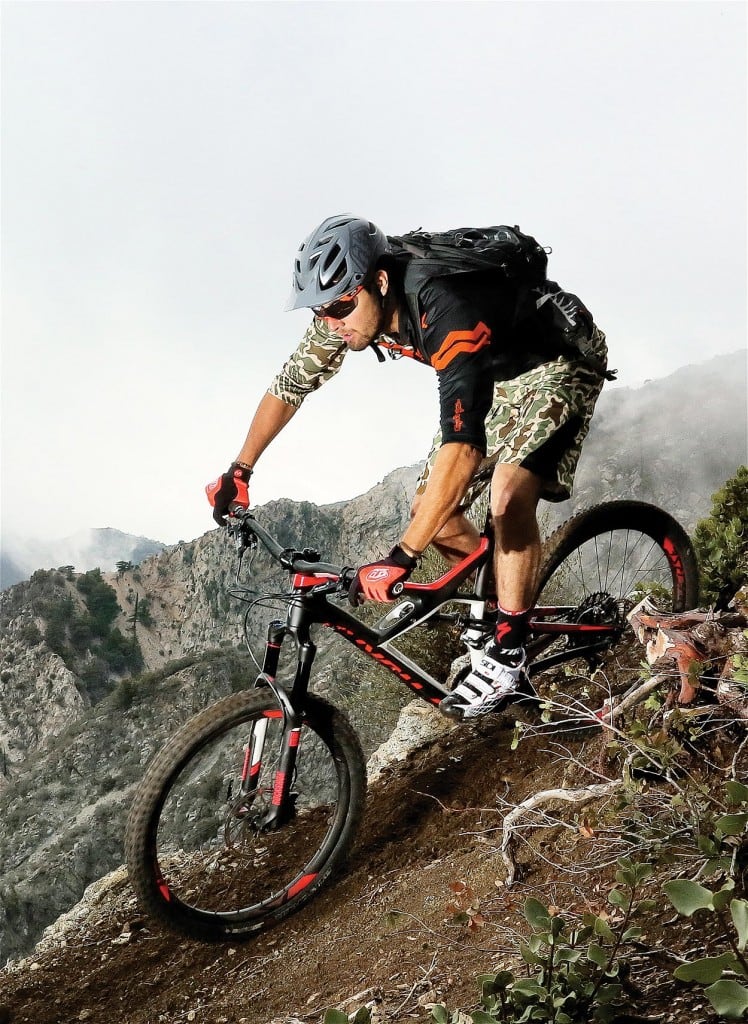 Descending: It felt like cheating, but not in the sense that it was easy or toned down. The slack 65.5-degree head tube angle, paired with 160 millimeters of solid Pike travel, allowed the bike to go the pace of a downhill sled while having the nimbleness of being about 10 pounds lighter. Keeping the bike in line while tackling the gnarliest trail sections was effortless and allowed us to take creative lines. Plusher than your grandpa’s recliner, the S-Work’s ability to eat up obstacles without restraint puts it in the running for the best all-mountain descender of the year.
Suspension feel: In our experience, Specialized’s FSR suspension is nearly unbeatable at the top and middle of its travel but tends to be lacking during big hits or hard cornering. To compensate, we rode the shock with only 20-percent sag in order to ensure it remained in its optimal range. While we believe the Cane Creek DBinline is a solid shock solution for most aggressive trail use, its smaller volume seemed to have difficulty handling some of the bigger descents we rode in areas such as Downieville, where a DBair would have been better suited. In one instance, the shock was nearly too hot to touch, which quickly affected its performance. We also experienced what we believed was cavitation in the shock in the first month of riding, which made the damping inconsistent.
Braking: SRAM Guide brakes are quickly becoming the standard by which all other brakes are judged. We ripped down descents that left our knuckles white and arms shaken, but the Guide RS Carbon brakes refused to fade, squeal or lack modulation. They simply worked.

We’re often most critical of our favorite bikes, and that’s because the only thing to do with a nearly perfect bike is make it perfect. While our size large arrived stock with a 75-millimeter stem, we quickly switched it out for a 50-millimeter counterpart that enabled us to open up the capabilities of the bike’s high-speed strengths. Most bike shops will be willing to swap it out as part of the purchase deal, but if you go that route, be sure it’s a length you’ll be comfortable with in the long run. If you’re racing, and you probably should be if you’re buying an S-Works, you’ll likely benefit from the security of the chain guide, but we removed it and never dropped the chain.

If you’re taller and prefer riding an extra-large, you might want to hold out for a future, redesigned, 27.5-specific version, which we hope will be available soon. For now, you have the options of small, medium and large. The S-Works Enduro is, without a doubt, one of the best all-mountain bikes available today, but that doesn’t mean it’s for everybody. If you’re in it to win it and won’t accept anything less, go with the $9300 S-Works and it’ll surely get you where you want to be. If you’re an avid rider looking for a daily driver that’ll deliver nearly the same ride characteristics but with a more reasonable parts spec, then go with the Enduro Expert or Elite. Coming in at $6,600, the Enduro Expert drops the price considerably by lowering the spec only slightly and replacing the carbon wheelset with a dependable aluminum alloy one. Regardless of which route you take, the Enduro line of Specialized bikes will not disappoint any rider in any situation. 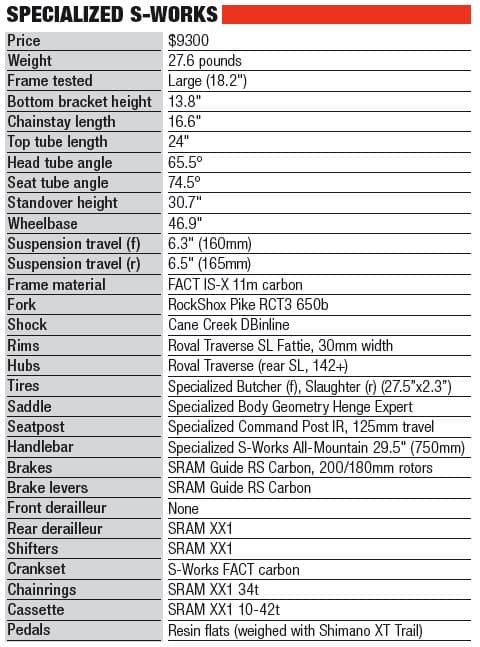 Photo of the Day: Zap In the Saddle, Breaking Conventions Yet Again

Learn To Corner Faster in 60 Seconds!