Taking the Belt to You

Single-speeders have carved out a niche for themselves in the mountain biking universe. These riders place far more emphasis on the rider than the bike. Their four-pronged attack of the mountain includes mechanical simplicity, physical superiority, honed bike handling skills and raw determination. Inside this exclusive single-speed club is a subgenre: the belters. These riders have tossed what chained them to the past, literally, and replaced that chain with a belt. Spot Brand, a bike company based out of Golden, ?Colorado, offers the Rocker SS for this rider. 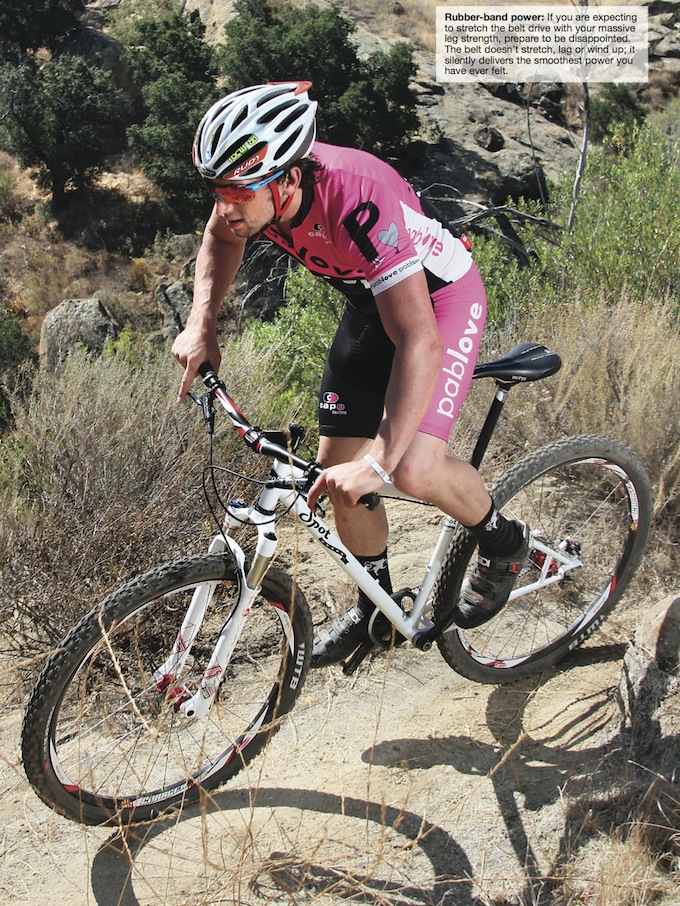 Single-speeders are generally thought of as a small group of wackos, but nothing could be further from the truth. Single-speed bike sales exceed those of downhill bikes and black-diamond bikes. Small group? Hardly. A single-speed bike can serve as a rider’s do-it-all, cross-country race bike/trailbike, but in most cases, it serves as the second bike in a rider’s collection. A single-speeder is the bike to ride when you want to work on your skills, are looking for a shorter-but-harder workout or are bored with the same old trail.

The Gates Carbon Drive carbon-reinforced polyurethane belt system is hard to miss. This is a new generation of the Gates’ belt-driven bike that we tested in the past, and there is a big difference. The belt and cogs, oops, we mean “pulleys,” have a new feature called “CenterTrack.” The pulleys have a center ridge that seats into a hollowed channel in the center of the belt. Think of it as a chainguide for belts. Sun Ringle put together a sweet wheelset using a rim design licensed from Stan’s NoTubes, their own Sun Ringle hubs, and color-coordinated alloy spoke nipples. The bike is covered with Truvativ and Avid components, which is not surprising considering that the owner of Spot Brand is also the founder of Avid Brakes (now part of the SRAM family). 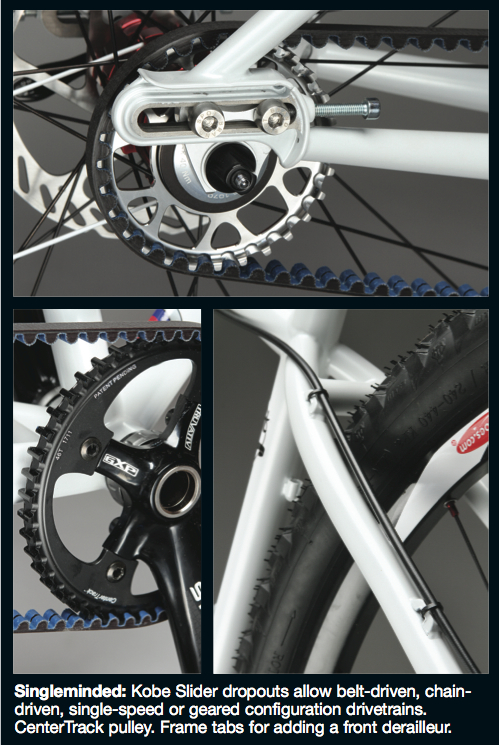 There’s not a lot to worry about as far as the setup goes. The RockShox fork has the patented Sag Gradients on the stanchion tubes, taking the guess-work out of setting sag. Set it, check the tires, give the belt a squeeze and you are ready to go.

Moving out: Our Rocker SS moved forward 12.5 feet for every crank revolution. Combine this gearing with the bike’s light weight and the Rocker is a rocket. It gets up to speed without reminding you that you are on a 29er. On flat ground, it will reach its 90-rpm cadence quickly; and when the trail turns downward, you will find yourself spun out just as fast.?

Cornering: The handling is on the quick side. It lets you pick lines and change lines as quickly as surface conditions allow. This is not to say, though, it is a nervous or twitchy bike; it offers plenty of stability. And once you pick your line, this bike sticks it.

Climbing: The stock gearing got us up climbs that we were expecting to hike. If the hill is short and steep, the trick is to use the bike’s lively acceleration to hit the climb with a burst of speed and keep the rpm up. Longer climbs require you to get out of the saddle and use all the traction of those big tires to chug up to the top. Long and steep climbs? Pick your battles and divide the climb into a series of efforts.

Descending: The steel frame has a lot more give in the rear triangle than most aluminum frames, and you are thankful for this while descending. Stay out of the saddle, keep your arms and legs bent, and choose your lines carefully. You will be surprised how fast you can attack a downhill with minimal front suspension and no rear suspension. The 6-inch brake rotors, front and rear, proved to be a good match. And remember, you want to stay off the brakes as much as possible on any single-speed bike.

Belt service: We had the opportunity to ride the Rocker SS on the trails surrounding the Northstar-at-Tahoe Resort. Many miles of singletrack were covered with a 6-inch layer of talcum powder-like dust. These conditions would require serious chain maintenance after every ride. The Gates belt needed nothing; it was unaffected by the dust.

Belt noise: Contrary to popular belief, the Gates belt does make noise. It is not as noticeable as a conventional chain, and it never increases when attacked by dust or mud. It is a muffled noise that you need to concentrate on if you want to hear it. You’ve never experienced anything like it until you ride one.

The stock gear was spot-on (pun intended) for our mountainous terrain, but flatlanders will want taller gearing unless they love spinning their brains out. There is a 24-tooth pulley available, and Spot says more gearing choices are in the works. Gates offers a free iPhone app for checking the belt tension. The app uses the phone’s microphone to record the frequency of the belt’s vibration when you pluck it (like a guitar string). They have a frequency range depending on rider size and riding style. Our belt worked trouble-free between 63 and 65 hertz with riders up to 180 pounds. The Gates CenterTrack drivetrain is a big improvement over the last version. It does not require nearly as much belt tension, so you are not applying crazy pressure to the wheel bearings and frame. Finally, the Spot Rocker SS’ dropouts are designed to accept a conventional single-speed-chain drivetrain or even a rear derailleur (even the cable guides are there). We could imagine this bike being a blast with either of those two options, but come on; if you are going for this bike, you’ve got to at least start with the belt.

We saw the advantages of a Gates belt-driven, single-speed bike years ago, and the Spot Rocker has taken advantage of the newer generation to step it up a notch. Single-speed riders who frequent trails with excessive dust, mud or both (think valve-grinding compound), this is the bike of your dreams. If you have been sitting on the single-speed fence, we can’t imagine a rider who would be disappointed getting off that fence and getting in the saddle of the Rocker SS. 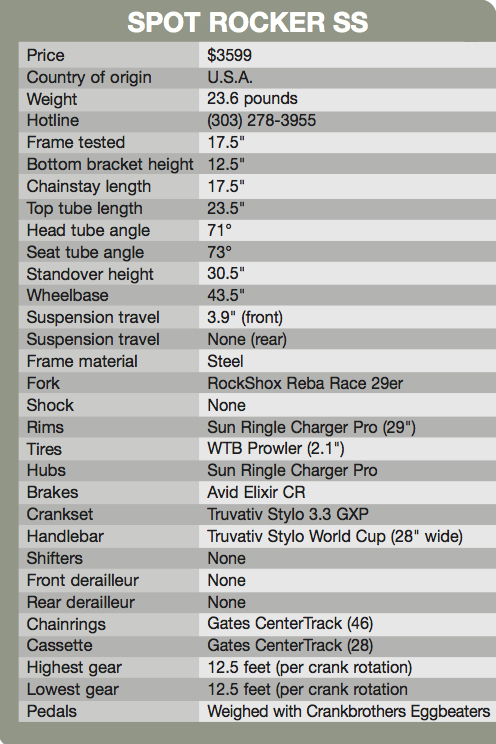 👀Well, what have we here? The all new @digitbik

Thriving in steep terrain and on rough rock 🪨 g