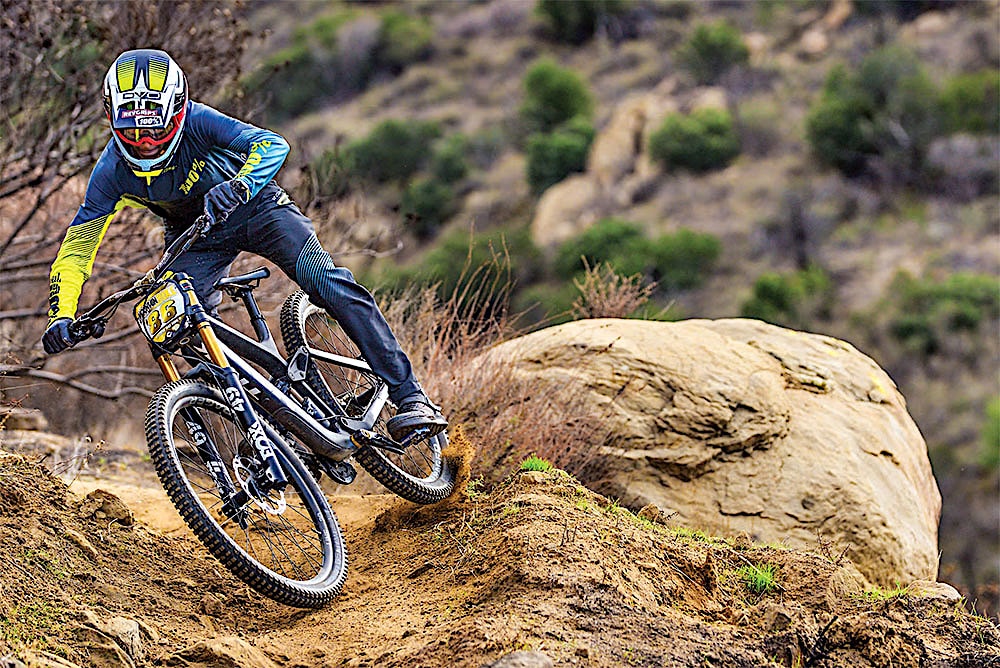 Downhill is one of the gnarliest forms of mountain biking, requiring rigs that look more like off-road motorcycles than traditional bicycles; however, unlike its motorized cousins, a downhill bike requires gravity to propel it down the mountain. These bikes are some of the hardest to justify buying, unless of course you live in close proximity to a ski resort or have a good group of friends willing to take turns being the shuttle driver.

For that reason, MBA doesn’t test many downhill bikes; however, the new wave of 29er downhill bikes had many of our test riders curious to know what it would be like to ride a 7.5-inch-travel rig with fast-rolling 29-inch wheels. So, we decided to test one. We are stoked to introduce you to one of the winningest bikes on the World Cup Downhill circuit—the Trek Session 9.9 29.

The Session has been in Trek’s lineup for years now and has featured many wheel sizes along the way, starting with the 26-inch wheel and later moving towards the 27.5-inch model, which is still available today. The 29er version was only offered as a frame, fork and shock package until the 2019 model year when Trek unveiled the bike we have here today. The Session 9.9 is Trek’s top-of-the-line 29er downhill race bike. So, who is it made for? Well, World Cup downhill racers; however, we’re sure Trek also expects to sell these high-octane bicycles to more human-like riders such as ourselves.

The Session 9.9 29 is designed for riders looking for an edge in competition or the ability to transform black-diamond trails into blue ones. 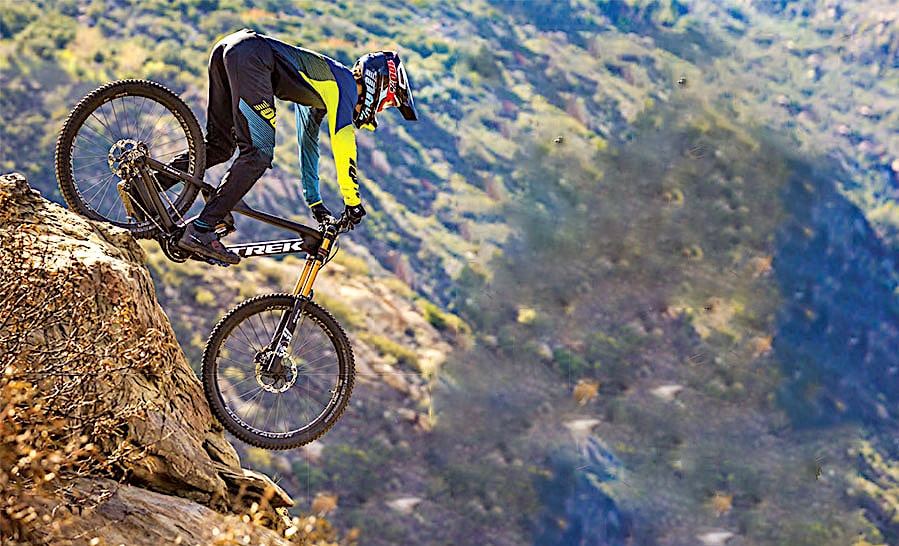 Trek designed the Session around many of its flagship technologies that we’ve come to know and love, such as OCLV (Optimum Compaction Low Void) Mountain carbon. OCLV is a process used across Trek’s carbon mountain bike lineup to ensure the right balance of stiffness, strength and durability. A Mino Link Flip Chip, along with fixed-angle headset cups, allows riders to fine-tune the Session’s geometry to better match different riding styles and types of terrain. The bike uses a four-bar suspension design with 190mm of travel, along with Trek’s patented ABP (Active Braking Pivot) to better separate suspension and braking forces. Trek then added armor to protect vulnerable areas, such as the downtube. 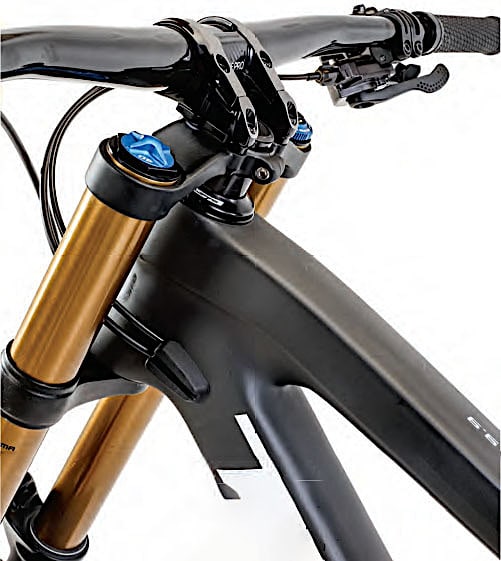 The Session 9.9 is a purebred race bike equipped with nothing but the best. Starting with its suspension, we see a 190mm-travel Fox Factory 49 fork, which builds off the popular Fox 40; however, the arch is modified to allow clearance for a taller wheel. In back, Trek spec’d a 2019 Fox Factory Float X2 with a new mechanical bottom-out bumper to provide a more progressive end stroke. Our Session rolls on Bontrager Line 30 downhill wheels, with a Boost 110×20 hub up front and a Boost 157×12 hub with a seven-speed downhill freehub in the rear. Trek added a burly MRP G4 carbon chainguide and gave the bike a full Shimano Saint groupset. Bontrager parts round out the rest of the build, including the cockpit, saddle, seatpost and tires. 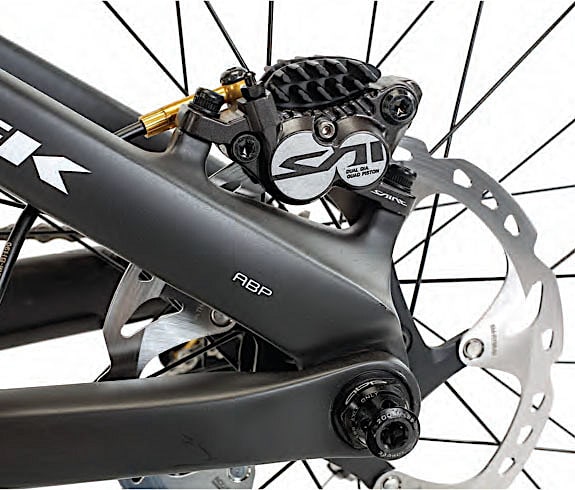 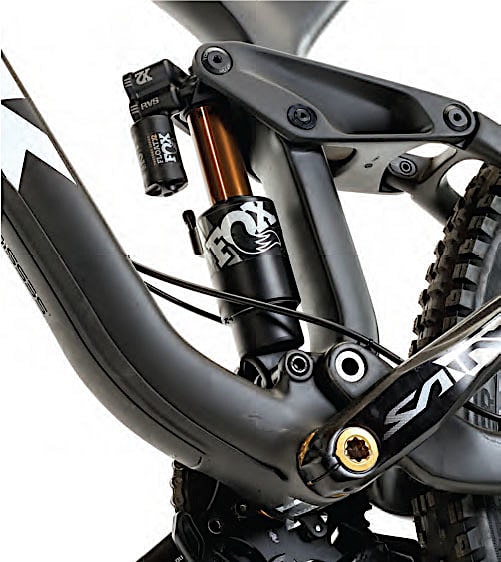 Setting sag: Trek spec’d the Session with Fox Factory-level suspension, which we opted to set up with 30-percent sag front and rear. We then made adjustments to our compression and rebound until we found our sweet spot. The Session’s rear air shock made it easy to set sag without having to worry about swapping a coil spring. This means riders of all sizes can tune the suspension to their liking without purchasing extra parts.

Moving out: Once you toss a leg over the Session, it immediately becomes apparent that this is a purebred race machine built to take on the world’s toughest World Cup tracks. The big wheels, slack angles and wide 820mm handlebars all come together to inspire confidence—no matter what obstacles are in front of this beast. Prior to our testing, we trimmed the seatpost down 3 inches in order to have a lower center of gravity over the bike. Racers often run a taller saddle height than park riders; however, even for racing, the stock seatpost seemed a bit too high.

Overall, the Session has a comfortable fit, and while the reach measurement looks short on paper, standing over the bike feels natural.

Cornering: Our test riders expected the Session 29 would be like a monster truck made to straight-line its way down the mountain, and while that was somewhat true, this big-wheeled downhill machine surprised us. While the Session isn’t a slasher-type bike that lets you smash the rear wheel into corners, it does track through turns impressively well and changes direction with relative ease. Of course, a little extra speed helps liven this bike up, but even in slower situations the Session navigated the trails quite well. 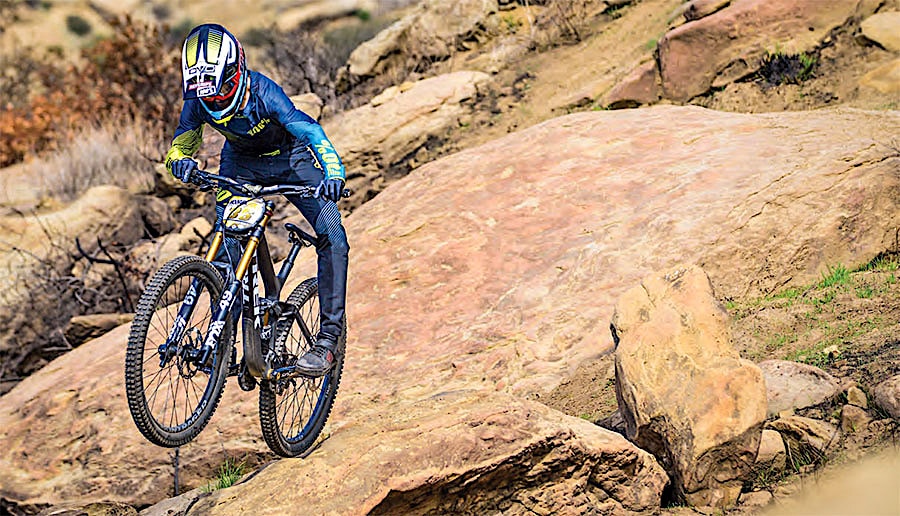 Descending: “Faster than a speeding bullet” is probably the best way to describe this bike’s ability to descend. The Session picks up speed as if it has a hidden motor tucked away in its bottom bracket. Even after getting on the brakes hard mid-run, it gets right back up to speed as if it never slowed down at all. This is likely attributable to the fast-rolling 29-inch wheels; however, Trek’s geometry and detailed suspension tuning play a major role here. The Session is most at home eating up rough and rocky black-diamond trails but isn’t afraid to take on bigger jump lines, either. Park riders may find the 29-inch wheels harder to toss around; however, any rider looking to improve his or her time to the bottom of the mountain will benefit from the larger-diameter wheel.

Trek offers the Session as a frame-only option or as the compete model we tested. Our bike came with components suited for a pro racer; however, we made a few changes to enhance our control and confidence. First things first, we trimmed our seatpost to achieve a deeper insertion, allowing for more room to move above the bike. We then swapped out the Bontrager handlebar and stem for a Renthal cockpit and added a custom-printed ODI number plate.

Diehard downhill racers are more likely to purchase this bike than park rats. Trek designed this bike for riders looking for the fastest way down the mountain who aren’t afraid to put up the cash to do so. Trek continues to offer the 27.5-inch model, which sells for a more affordable $4730, and will likely suit the needs of riders wanting a fun park bike they can toss around jump trails. That said, the Session 29 is the ultimate weapon for riders who need it. The bike blasts down the mountain with precision and control, turning the gnarliest terrain into a casual walk in the park.  www.trekbikes.com 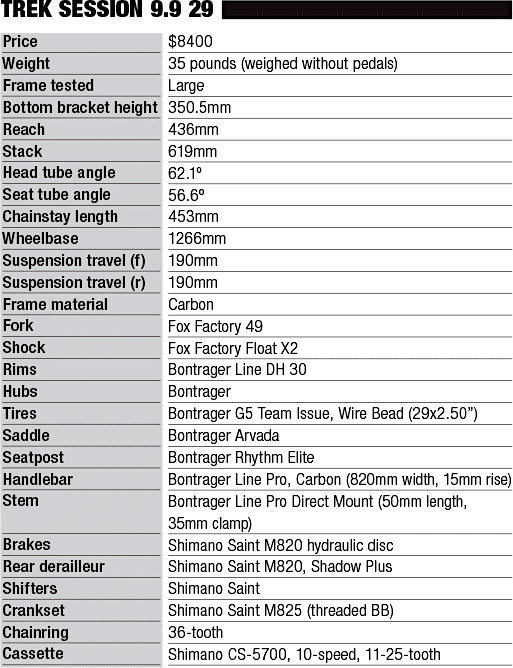 Video: Any One Of Us