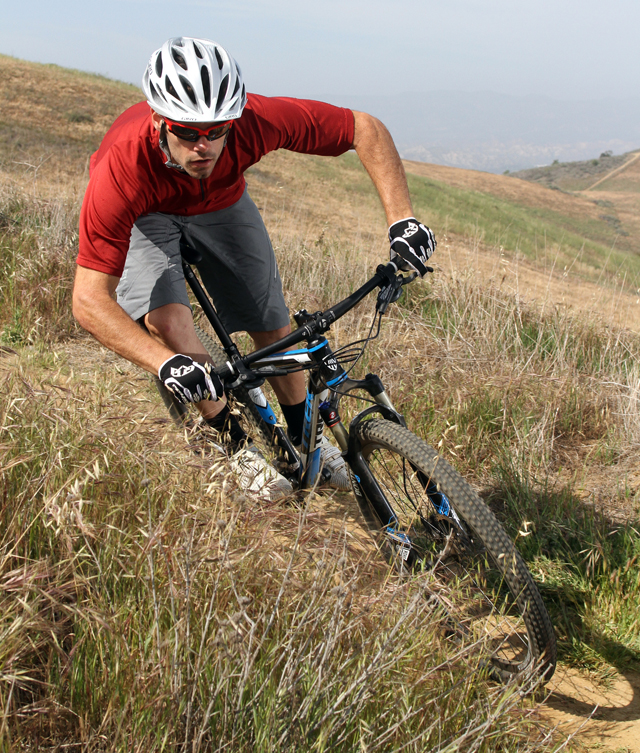 Why would you ever feel sorry for a rider on a long-travel, multi-thousand dollar bike? Unfortunately, we feel sorry for these guys all the time. We often come across riders who have clearly purchased a bike with way too much travel and unwanted ballast for the type of riding they do. Now, the rider might be having a grand old time, but he could have spent thousands less on a bike like the Trek X-Caliber and be having a much better experience.


Trek puts the X-Caliber 29er in their “race” category, but that only tells part of the story. This bike offers enough versatility that it could serve as your everyday singletrack/backcountry explorer. This is a great bike for everything but ultra-technical trails. They make a female-specific version of the X-Caliber and a cool single-speed variation called the Rig. They all sell for the same price. The Rig uses the drivetrain savings to slap on a Fox fork. Trek offers the X-Caliber in five sizes (three for the women’s version). 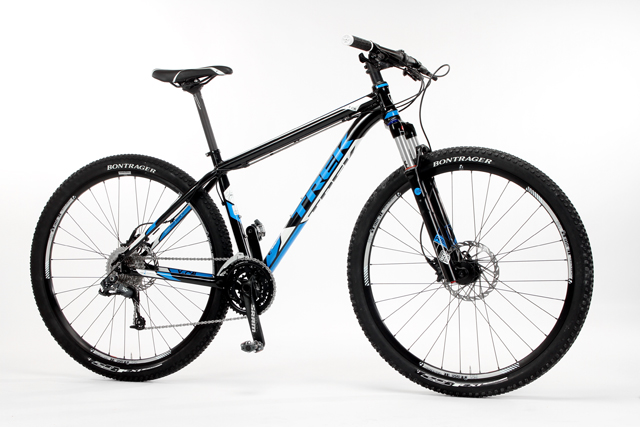 The X-Caliber frame uses Trek’s Alpha Gold aluminum butted and hydroformed tubes. The frame, part of the Gary Fisher Signature line, uses G2 geometry (a tweak on conventional 29er geometry that relies on a different fork offset). The cold-forged dropouts and bottom bracket shell add strength; the derailleur hanger is replaceable. The frame uses interrupted housing for the derailleur cables, and cables are routed under the top tube to keep them out of the way. There are mounts for two water-bottle cages. 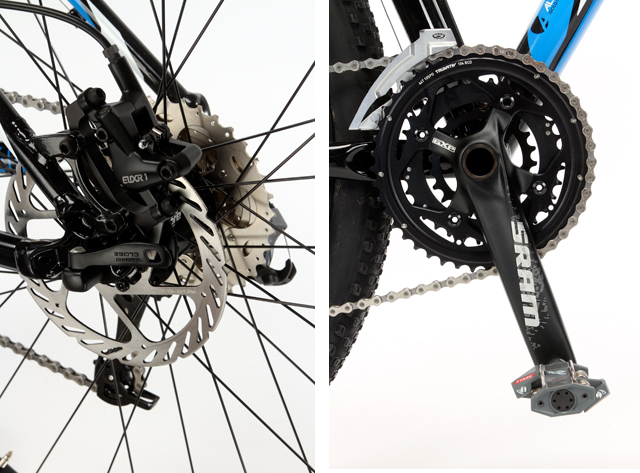 The RockShox fork is made with Trek’s proprietary G2 off- set, but it takes a trained eye to catch it (the crown offset is the easiest clue to spot). The 3×10 SRAM/Shimano drivetrain gives the rider lots of options. Trek put a 7-inch brake rotor up front and a 6-incher in the rear. The Bontrager Mustang rims and Bontrager tires give the X-Caliber a race-ready appearance. 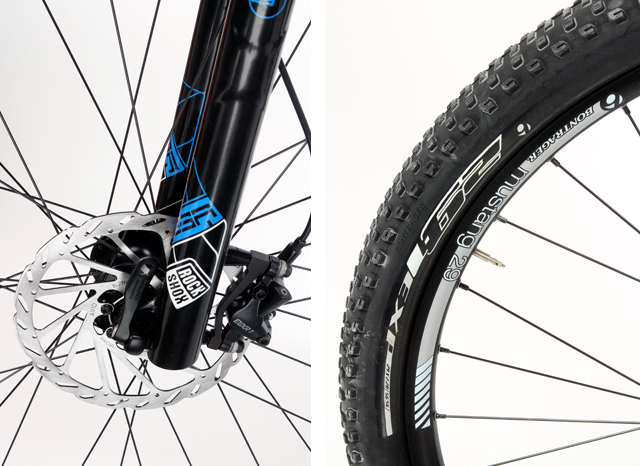 The setup: The fork is equipped with RockShox’s Dual-Air system that allows the rider to set separate air pressures in the positive and negative air chambers. Using enough air in the positive chamber to give the suspension 20 percent sag (5 psi over the recommended positive airspring) and the recommended psi for the negative air spring worked best. An external rebound adjuster allows you to set rebound to your prefer- ence. Start from six clicks back from “full turtle” and go from there. Check the tire pressure and you are set. 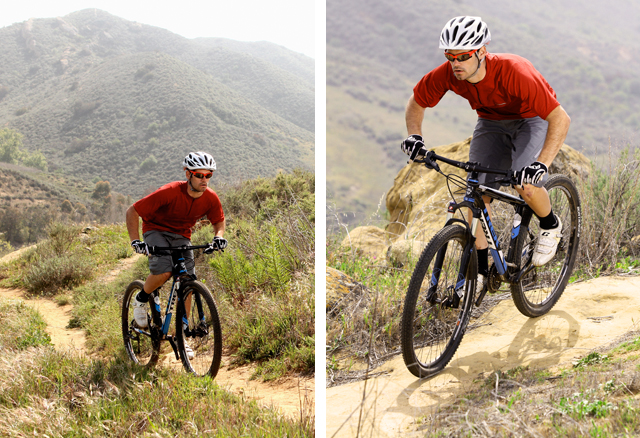 On the trail: The X-Caliber puts you in a racy position with a 90- millimeter, zero-rise stem and a handlebar (using thin grips) with the slightest rise of any “riser” bar. It’s more like a flat bar that hiccuped. The firmness of the Bontrager Evoke 1 saddle adds to the racy feel. The stays offer plenty of tire clearance while staying out of the rider’s way.

Moving out: The Bontrager tires offer low-profile, closely spaced knobs that get the big wheels rolling with the least amount of effort. This is a very quick-accelerating 29er, and it doesn’t mind if your style is in or out of the saddle. Either way, the drivetrain, wheels and frame don’t show weakness as you mash or spin the pedals.

Cornering: Trek’s G2 geometry gives the X-Caliber a light feel up front, but it is still far from the nervousness of steep-head- tubed cross-country race bikes. That’s a good thing. The bike is plenty responsive for quick changes, but it doesn’t require the rider to continually concentrate on the steering; it gives you room to relax. The tires grip better than their tread pattern would have you believe in both fast- and slow-rolling situations.

Descending: Remember that you only have a short-travel fork and a rigid rear end, but inside those boundaries, the X-Caliber X-cels. The fork does a great job of absorbing hard hits, while the wheels take care of the small stuff. Braking doesn’t feel powerful, and that’s a blessing on a bike like this. If there is too much power, then the burden falls on the rider to carefully dole out the pressure to the levers.

Climbing: The bike’s weight is excellent for a sub-$2000 29er. With its solid drivetrain and frame, you’ve got a great climbing package. The best advantage is being able to get out of the saddle for bursts of acceleration without worrying too much about breaking the rear tire loose. The only time we used the fork’s lockout feature was to see if it worked. It does, but you don’t really need it.


The X-Caliber would have been fine with a 2×10 drive- train instead of the 3×10 drivetrain that delivers a tall gear you will only use on a paved downhill and a low gear that will have you rock crawling. Still, we understand that riders are reluctant to give up the three rings. Trek will no doubt sell more X-Calibers because of their drivetrain choice. Converting the rims and tires to tubeless would be a sensible upgrade, and good-quality clipless pedals would complement this package well.


The X-Caliber would serve as a great sport-level, cross-country race bike, but let’s face it, only a tiny percentage of mountain bikers race. This is a bike we could recommend to any rider who is looking for a great, all-around trailbike. If you own a heavy, long-travel trailbike that fills your heart with dread when you approach an uphill or wallows along the trail, you are using the wrong tool for the job. The X-Caliber is the right tool, and it needs nothing other than pedals to get it to work. 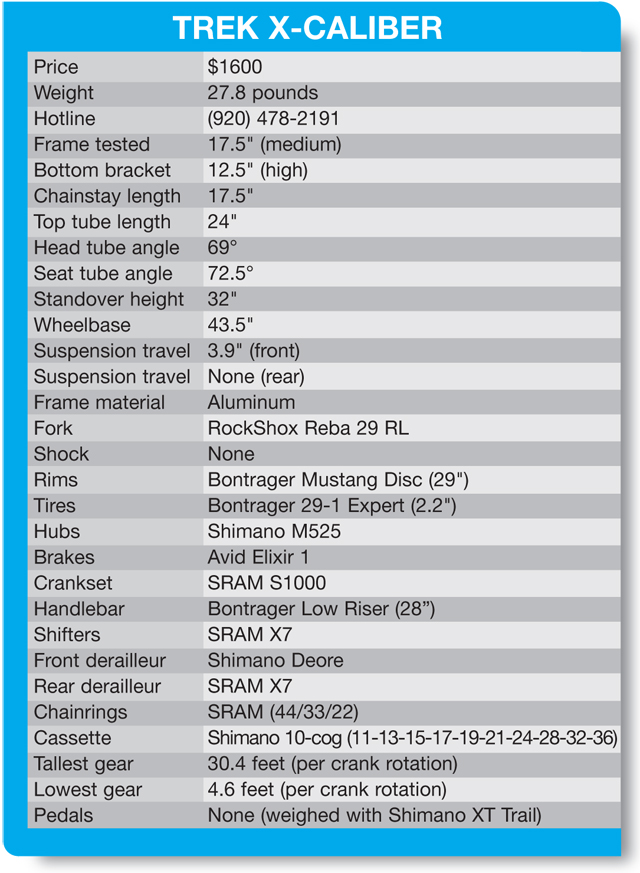 For more information on the X-Caliber and other Trek Bikes, click here.
This review originally appeared in our July 2012 issue. Subscribe to MBA here.

Photo of the Day: Mountain Biking on Catalina Island

HOW TO CHECK AND REPLACE YOUR MOUNTAIN BIKE’S BRAKE PADS