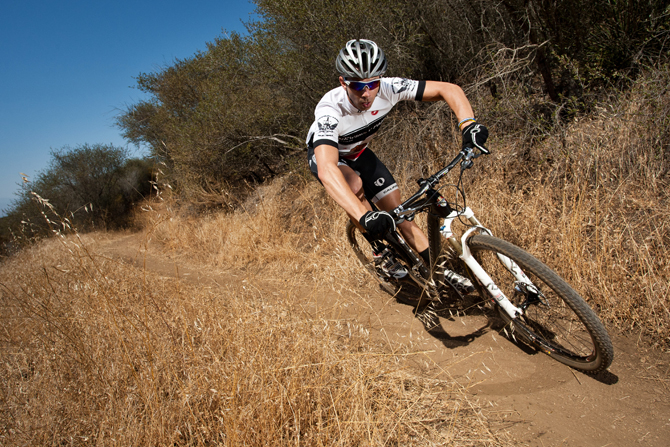 We traced the Windsor brand name back to a Mexican bike company that had a tie-in with Eddy Merckx in the ’70s, but don’t quote us on that. The history is spotty and doesn’t have any bearing on what Windsor is todaya new line of bikes from the same guys who are behind Motobecane. Like Motobecane, Windsor will be offering performance mountain bikes sold directly to riders at very attractive prices.

We ordered up a 29er cross-country rig that is part of the Windsor C29 series. Available in three different parts specs, our C29 Pro test bike is the cream of the crop, spec’ed with components usually found on bikes nearly twice the price.

WHO IS IT MADE FOR?
The Windsor C29 Pro is for the budget-conscious cross-country rider looking to get the best bang for his buck while still making his buddies whimper behind him while motoring up the climbs. 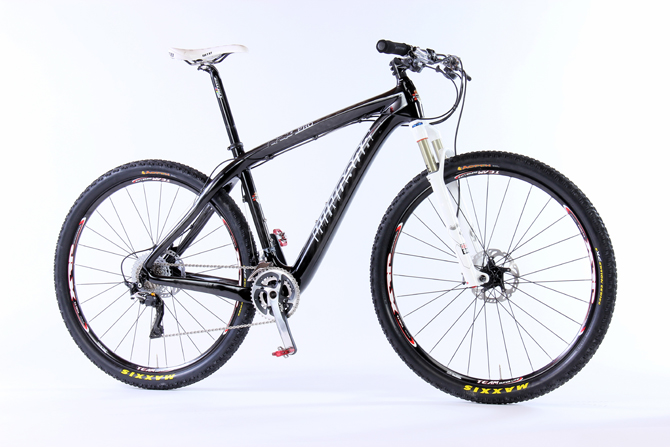 WHAT IS IT MADE FROM?
The C29 Pro’s frame is constructed from high-modulus monocoque carbon fiber. Windsor was clearly after stiffness, as the head tube, downtube and bottom bracket shell feature huge diameters and bulbous shapes. The head tube is tapered from 1 1/8 to 1 1/2 inches, while the bottom bracket sees a more traditional treatment with a thread-in-style, 73-millimeter shell.

WHICH COMPONENTS STAND OUT?
The C29 features the full-Shimano XTR treatment with a 2×10 drivetrain setup that includes their Shadow Plus rear derailleur. The cockpit is outfitted with Ritchey Logic WCS Carbon handlebars and an aluminum stem and seatpost. The RockShox SID RCT3 is a solid choice for this bike, but we would’ve liked to see it come with a 15-millimeter thru-axle option rather than a standard quick release.

HOW DOES IT PERFORM?
Moving out: Hardtail 29ers seem to run the gamut as far as how a given size will fit. Our size large was on the taller end of the spectrum in terms of standover height. Once on the bike, the bike position was predictably aggressive. The Ritchey handlebar features a comfortable 10-degree backsweep, though the bars’ abnormal appearance may be a bit polarizing.

Cornering: While the C29 features steeper geometry designed for cross-country racing, the bike’s long wheelbase and chainstays temper this. The bike strikes a balance between quick handling and stability. While we have certainly ridden quicker-handling race bikes, we never had any issues getting around tight switchbacks. The added stability through fast sweepers was welcomed and would be ideal for new racers getting into their first true race bike. The Maxxis Aspen 2.1-inch tires are fast and provide enough grip for our hardpack trails, but we would expect even better control with a larger-volume tire. Because of the stiffness of the frame, the RockShox fork with a standard 9-millimeter quick–release axle is the weak link in terms of lateral rigidity when cornering hard. A 15-millimeter thru-axle would serve this bike much better.

Climbing: At 22 pounds and stiff as a board, the Windsor doesn’t give you a single excuse for not being the first one up the climb. The bike feels as if it could accelerate out from underneath you when you put the power down.

However, as is often the case with bargain carbon frames, the C29 is not only stiff laterally, but vertically as well. On long climbs, especially those littered with square edges and ruts, the rigidity of the frame can jar you into submission if you don’t pick your lines carefully.

The RockShox SID RCT3 fork complements the racy nature of the bike with its Motion Control adjustable damper with tunable lockout lever.
Descending: While the 29er wheels certainly take some of the edge off of rough descents compared to their 26-inch brethren, learning to descend on a hardtail, especially an ultra-stiff carbon model, can be a challenge. Picking smooth lines and riding light on the bike are essential. The Windsor will get you from point A to B, but how fast that happens will depend on your skill.

Braking: It’s impossible to go wrong in the braking department when you’ve got Shimano XTR brakes underneath you. Some riders switching from other makers may find these stoppers a bit touchy, especially on such a super-light hardtail. Once you get a feel for the quick modulation, however, you’ll realize the XTRs are the best tool for the job. 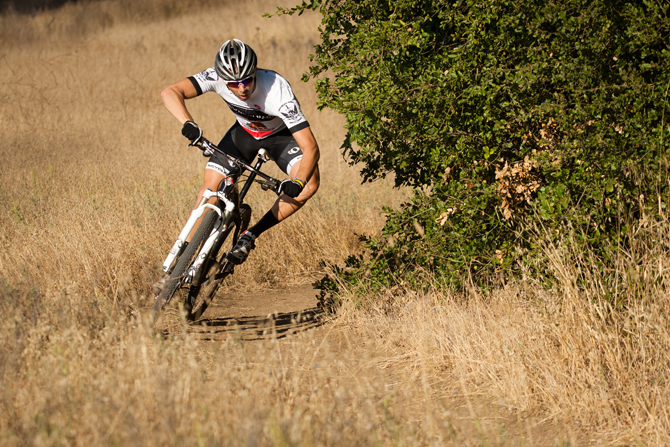 TRICKS, UPGRADES OR TIPS?
The C29 comes spec’ed with a parts package comparable to any other brand’s top-of-the-line options. While the tires were chosen for their light weight, we would take a weight penalty in return for a performance upgrade. A larger-volume tire, rather than the narrow 2.1-inch Maxxis Aspens that come stock, would help soften the ride a bit over rough terrain and provide more grip in loose corners.

As we mentioned, the handlebars look pretty different from your standard flat bar. While we didn’t have any com- plaints about how they felt, at 26 inches wide, they are a bit narrow by today’s standardsyes, even cross-country standards. A wider bar would provide more leverage when climbing, as well as more control while descending and cornering.

BUYING ADVICE
Windsor claims they are building a dealer network, but right now, if you want one, it will come from Bikes Direct, a mail-order firm. That means you can’t try it before you buy it, and you better be handy with tools. If you are, you do get a lot of bike for the money.

While the lateral stiffness is suitable for the racecourse, it comes at the cost of rider comfort; the frame is very unforgiving. If you spend your weekends on long trail rides littered with rough terrain, do your back a favor and look elsewhere. However, if a no-frills, ultra-light and incredibly efficient race bike is what you’re after, it’s hard to beat the value of the C29’s racecourse prowess and top-shelf parts spec. 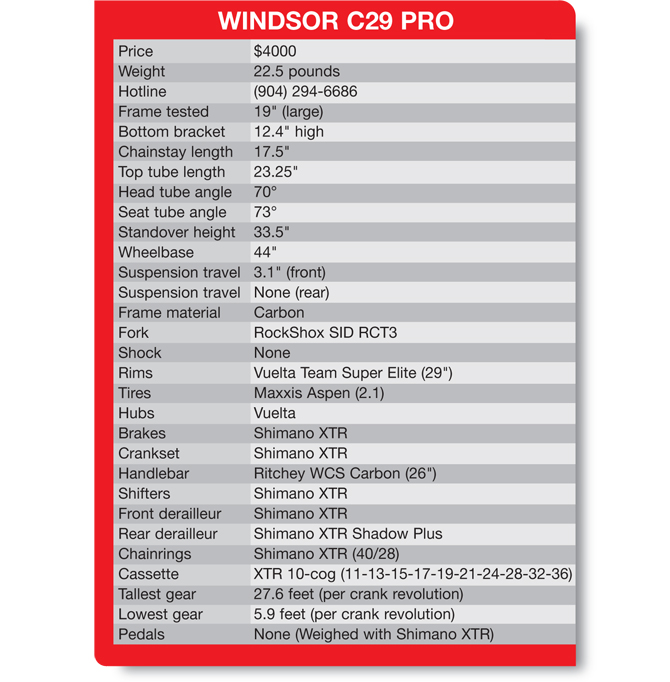 This test originally appeared in our November 2012 issue, subscribe to MBA here.

Photo of the Day: Aaron Gwin at the 2012 World Championships

Interbike 2013 Opens Their Doors to Consumers