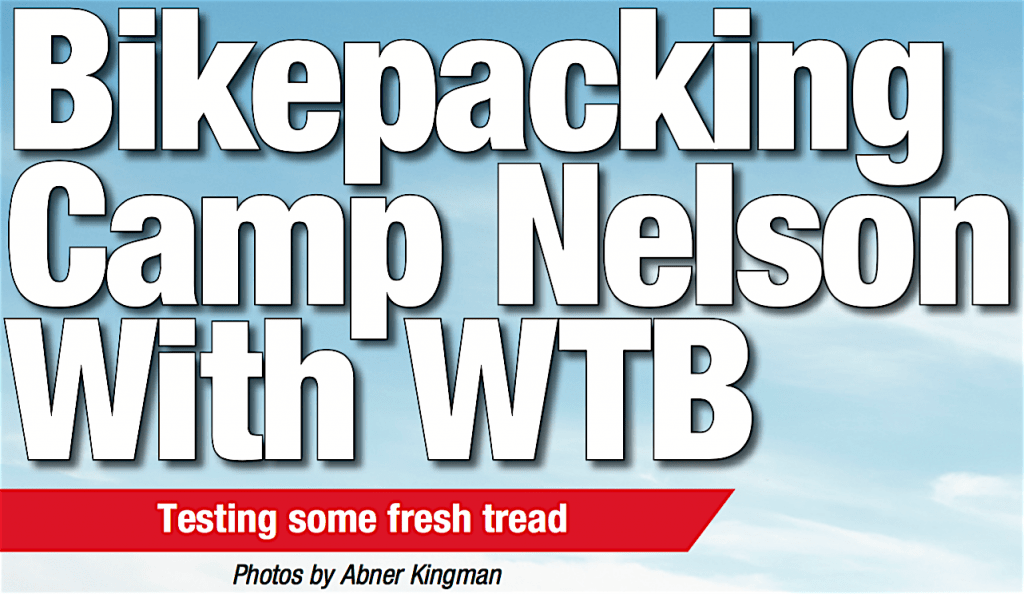 Bikepacking has a certain appeal for adventure seekers looking for their next great trek through uncharted parts of the wilderness. Camp Nelson, California, is located at the southern tip of the Sequoias and is home to some of the best riding the state has to offer. WTB chose these trails for a two-day bikepacking excursion to test their new Ranger tires, suited for trail to adventure riding.

Camp Nelson is a tiny town just east of Porterville and sits next to the infamous Kern Valley, where trails such as the Cannell Plunge draw riders from all over California during the summer. The ridge surrounding Camp Nelson has hundreds of miles of purpose-built singletrack, including Bear Creek, which just might be the best trail in the state. Camp Nelson itself was made famous back in the early 1990s by a murder case that sounded more like a plot from a soap opera than real life. The town welcomes mountain bikers and keeps the trails groomed as long as the snow will allow. 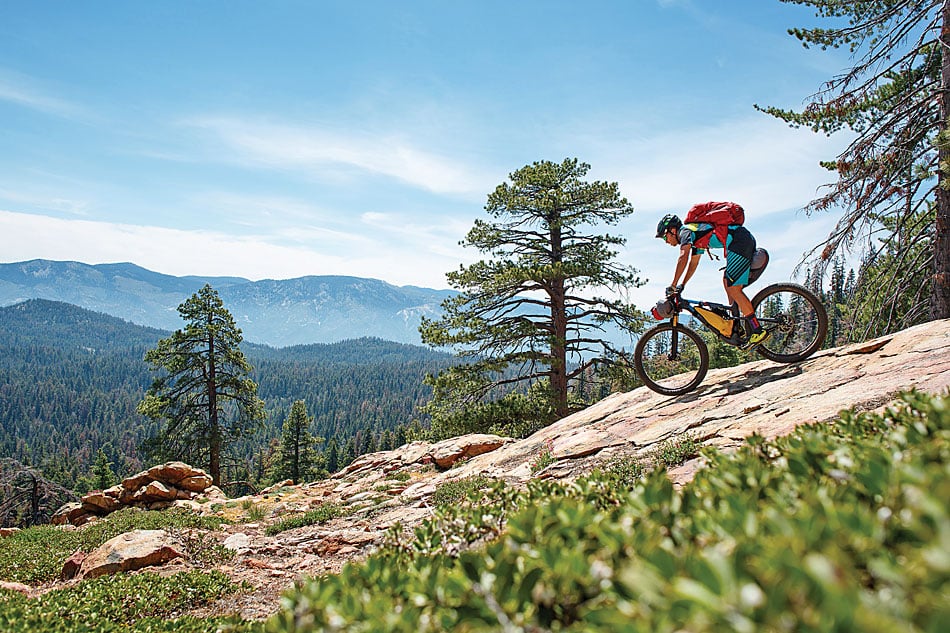 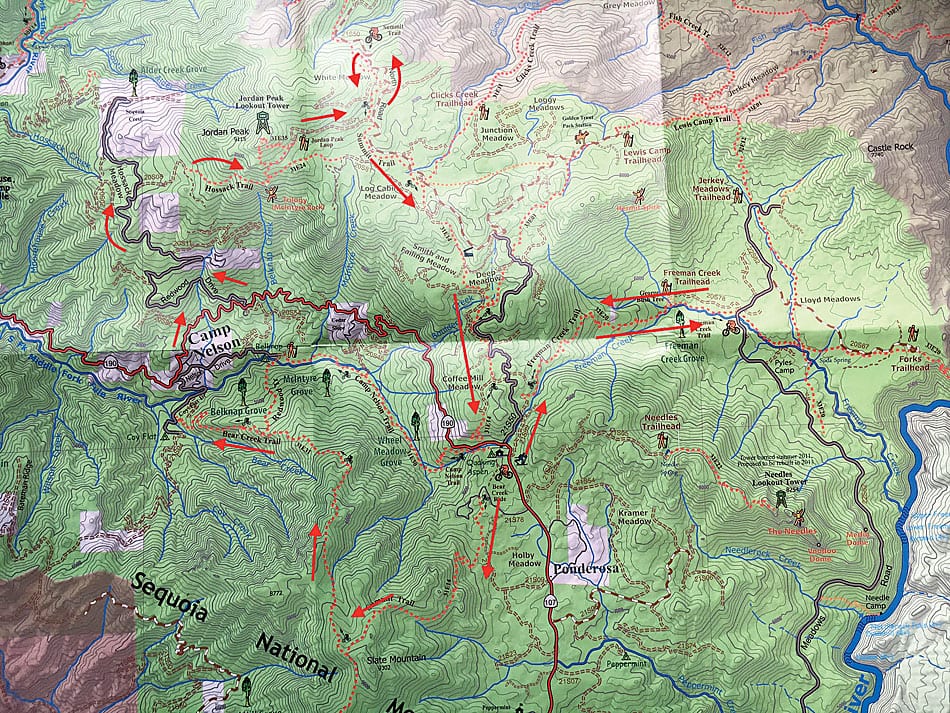 Our route wasn’t the most epic ever conceived, but when you’re carrying an extra 30 pounds of gear and riding at high altitude, the riding is tough enough. Day one was a 30-mile traverse along the ridge from Jordan Lookout to Quaking Aspen campground and totaled about 6000 feet of climbing. Some sections were unrideable and required pushing our laden rigs up the mountain. Our trek started with a two-mile grind up the Hossack trail from Redwood Drive that would eventually lead up to Jordan Peak Lookout. Half of this climb was too steep to be ridden and required quite a bit of hiking, but the views just below Jordan Peak Lookout overlooking Camp Nelson made the work well worth it. 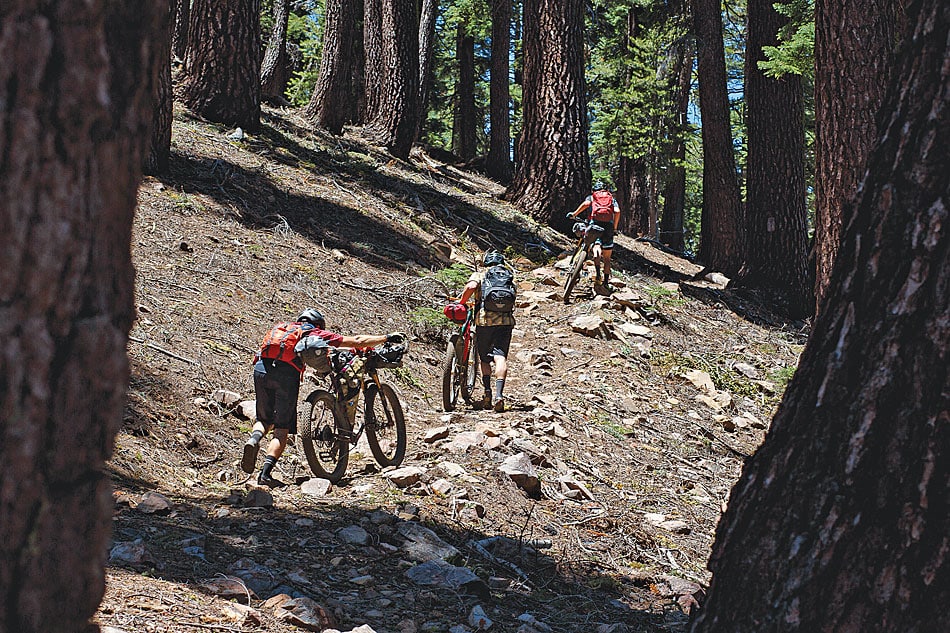 Sometimes you have to push: Bikepacking is hard work. Between the elevation and extra gear, the miles can be long and hard. The climb on day two had some of the steepest pitches we faced all week and required plenty of walking.

After a brief stop on McIntyre Rock, we made a hard left and began the one-mile, 1000-foot climb up to Jordan Peak Lookout. Hossack trail was hard work, but Jordan Lookout proved to be its own challenge with steep, rocky, twisting switchbacks. Jordan Lookout is one of eight manned fire lookouts located in the Sequoias and provided a good spot to eat lunch and talk with the Forest Service volunteer who runs the tower during the summer months. 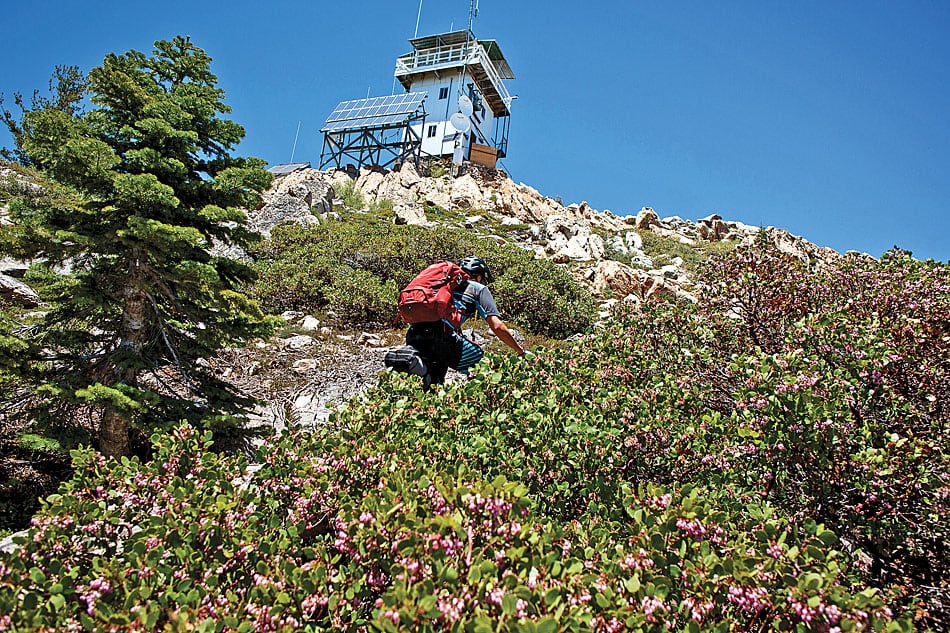 A quick, hard climb: Our day started with a long, steep grind up the Hossack trail that eventually made a left turn for a one-mile climb up to Jordan Lookout. In that one we gained 1000 feet in elevation through a steep, rocky switchback climb littered with over- grown bushes.

From Jordan Lookout we had a fast, flowing descent that made us feel rewarded for all the hard work to get up to the tower. We met up with Summit Trail, which is one of the longest trails in the Camp Nelson area that stretches over 50 miles along the ridgeline to the neighboring town of Springville. Summit would take us from the base of Jordan Peak to our campground in Quaking Aspen. 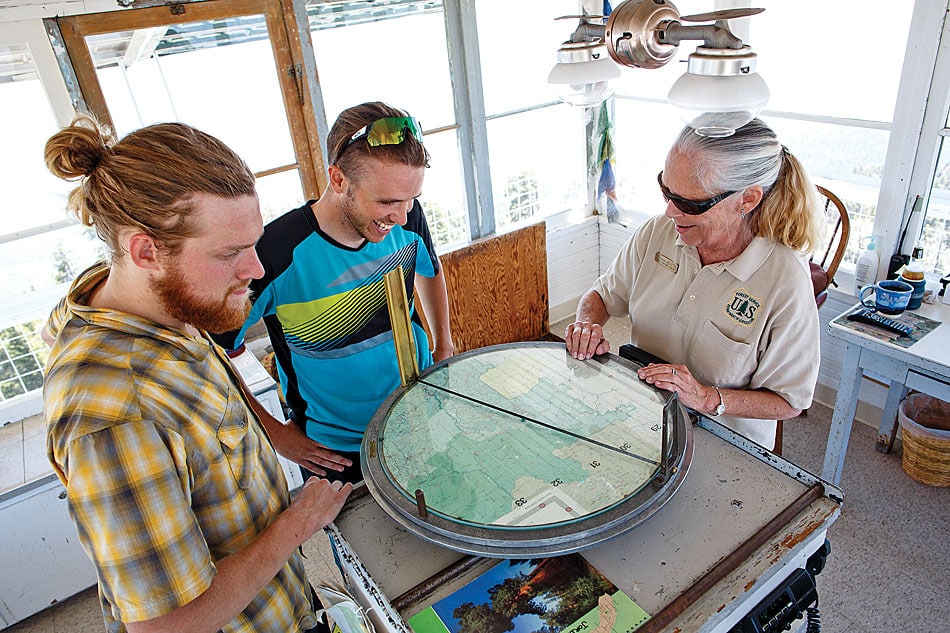 Find the fire: In a world filled with modern technology, there are some inventions that still work. The Osborne Fire Finder was invented in the mid-1800s and uses a topographic map with two sights to allow the user to pinpoint the exact location of a fire. After a brief stop we descended the backside of Hossack to North Road where we would meet up with Summit Trail.

The miles along Summit to Quaking Aspen were rolling and crossed lush meadows that looked more like The Shire than anything else thanks to a winter of snow. Most of Summit stays in the tree line, paralleling various Forest Service roads, giving us a consistent bearing of where we were. After spending what felt like hours on Summit, we reached the top of Freeman Creek Trail that gave us a fast, loose descent down Quaking Aspen. There wasn’t a better way to end our first day. 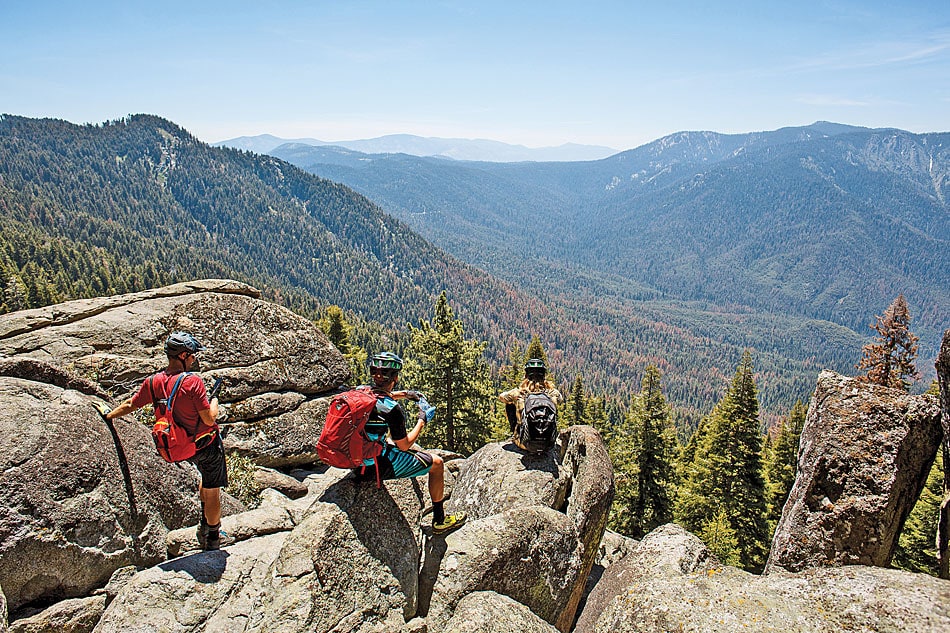 Forgotten country: The mountains just south of Sequoia National Park are home to some of the best riding in California. This area is remote and can be difficult to access, but the rewards are plentiful for making the trek.

Riding with giants: Ripping through loam has a certain excitement that you can’t find anywhere else. Add a grove of giant sequoias and you have a perfect combination for an epic stretch of trail. Thanks to a damp winter, the ferns were green and growing in force, adding to the epic landscape as we threaded our way through the giants. 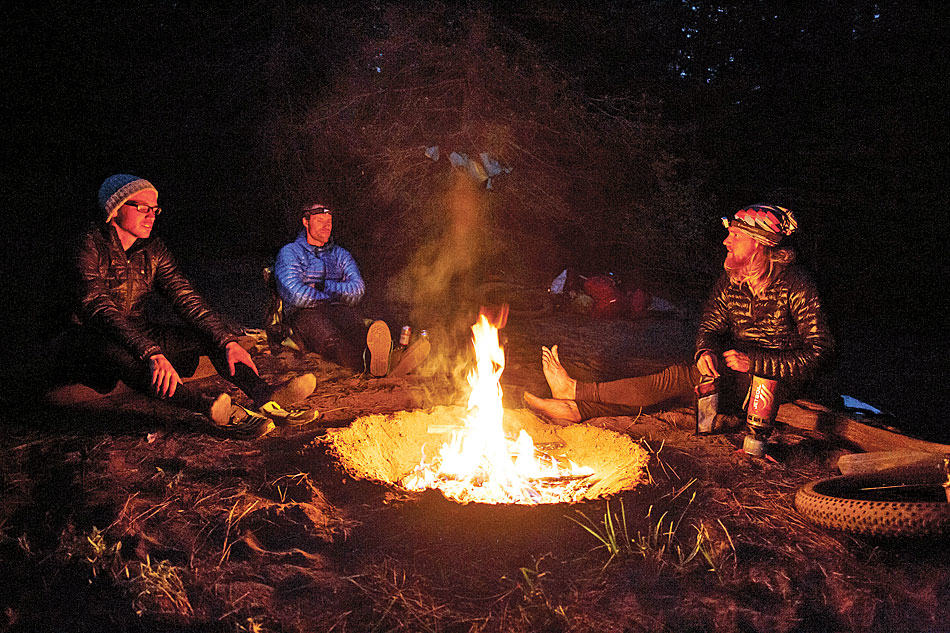 In theory, day two was supposed to be a bit easier, starting with a long climb up Summit to where it met Bear Creek. The going was slow as the trail pitched steeper than we could pedal our rigs, crossing the occasional leftover snowdrift. After a few hours of climbing we reached the top of the ridge, overlooking Kern Valley at about 9100 feet, and enjoyed some snacks and a friendly game of bocce ball to mentally prep for the epic descent down Bear Creek Trail. 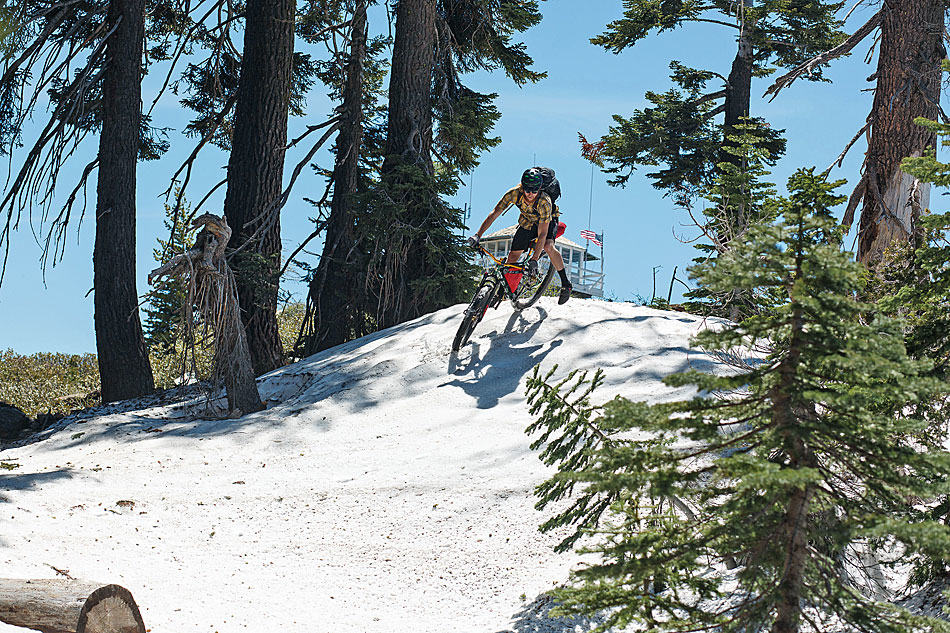 Still snow: California has been hurting for water, and this winter the mountains got a healthy replenishing of snowpack. Even in mid-June there were massive snow drifts 3–5 feet deep above 6000 feet. This one was just below Jordan Lookout and didn’t show signs of melting any time soon.

On paper, Bear Creek looked appealing, boasting a 5000-foot descent that went through Belknap Grove and Bear Creek Grove that’s riddled with green fern under massive sequoia trees. The landscape of the trail had several layers, starting with the barren high-elevation ridgeline to snow-dampened loam to steep rocky chutes, Sequoia groves and plenty of pine. With a couple stops to take in the scenery, we made our way back to Camp Nelson to finish what was one of the best trails any of us had ever ridden. 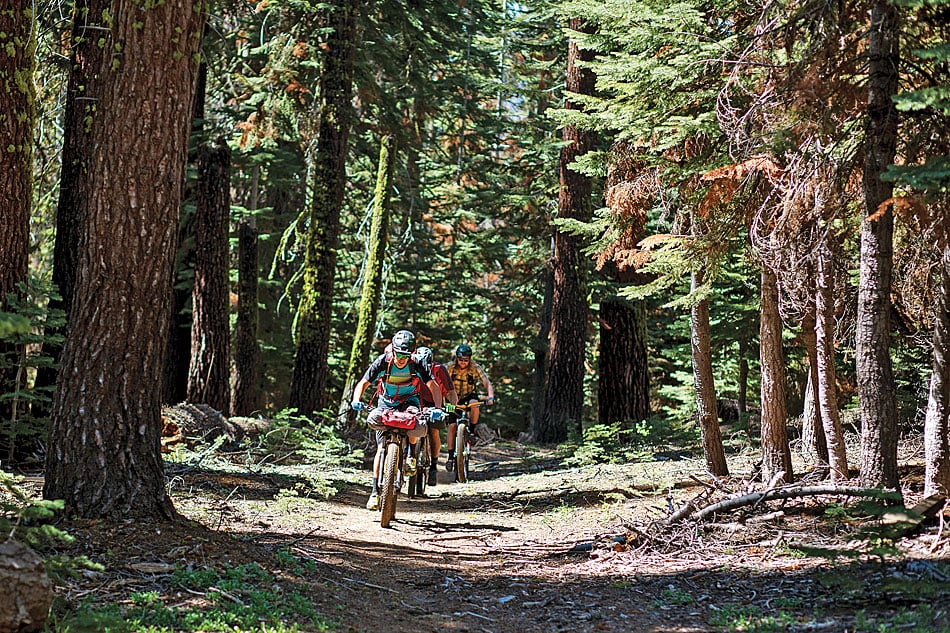 A couple easy miles: The riding season was still early, and sections of Summit Trail were overgrown or lost in the passing of winter weather. The North Road parallels the first part of Summit and gave us a couple easy miles after the long climb we had just slaved up. 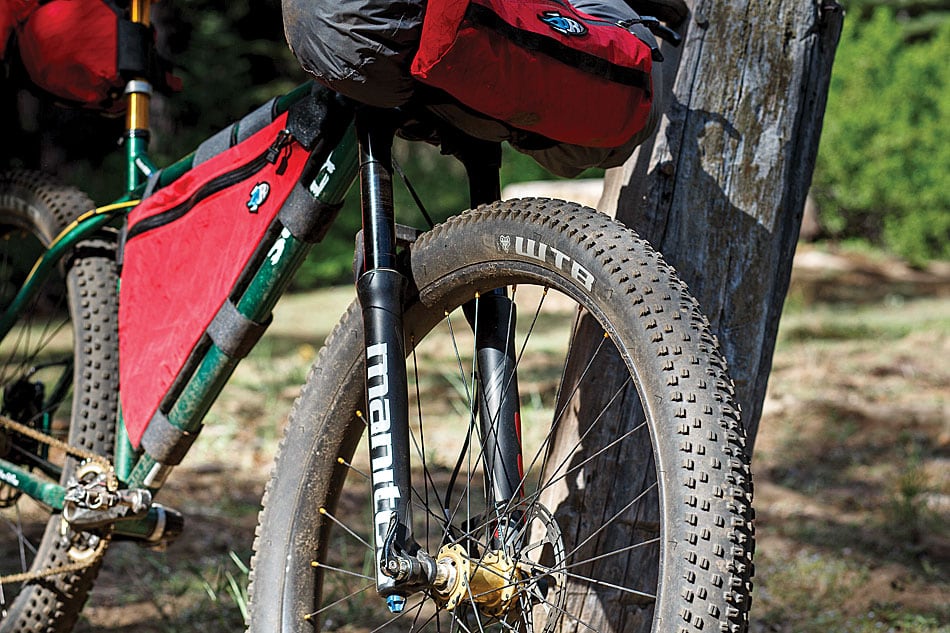 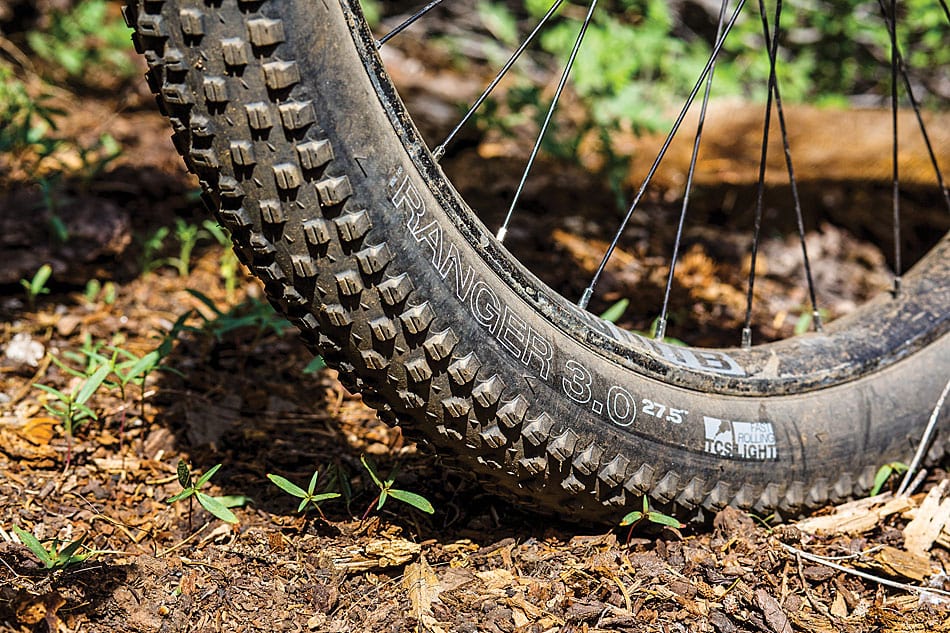 Trail or adventure: WTB designed the Ranger to be an all-around trail tire with a mid-size tread. At 3 inches wide, the air volume is well-suited for adventure riding, or if riders are looking for something a little more comfortable on the trail.

Our first impressions of the Ranger were positive. The trip offered plenty of variety to test the different aspects of the tread design. There is ample spacing between the tread to shed mud and larger shoulder knobs to hook up in turns. The air volume added cushion to our weighted rig while maintaining good traction on steep climbs. The Ranger is available in a 2.8 and 3.0, with the wider size being more suited for bikepacking and adventure riding.

Photo of the Day: Rachel Throop