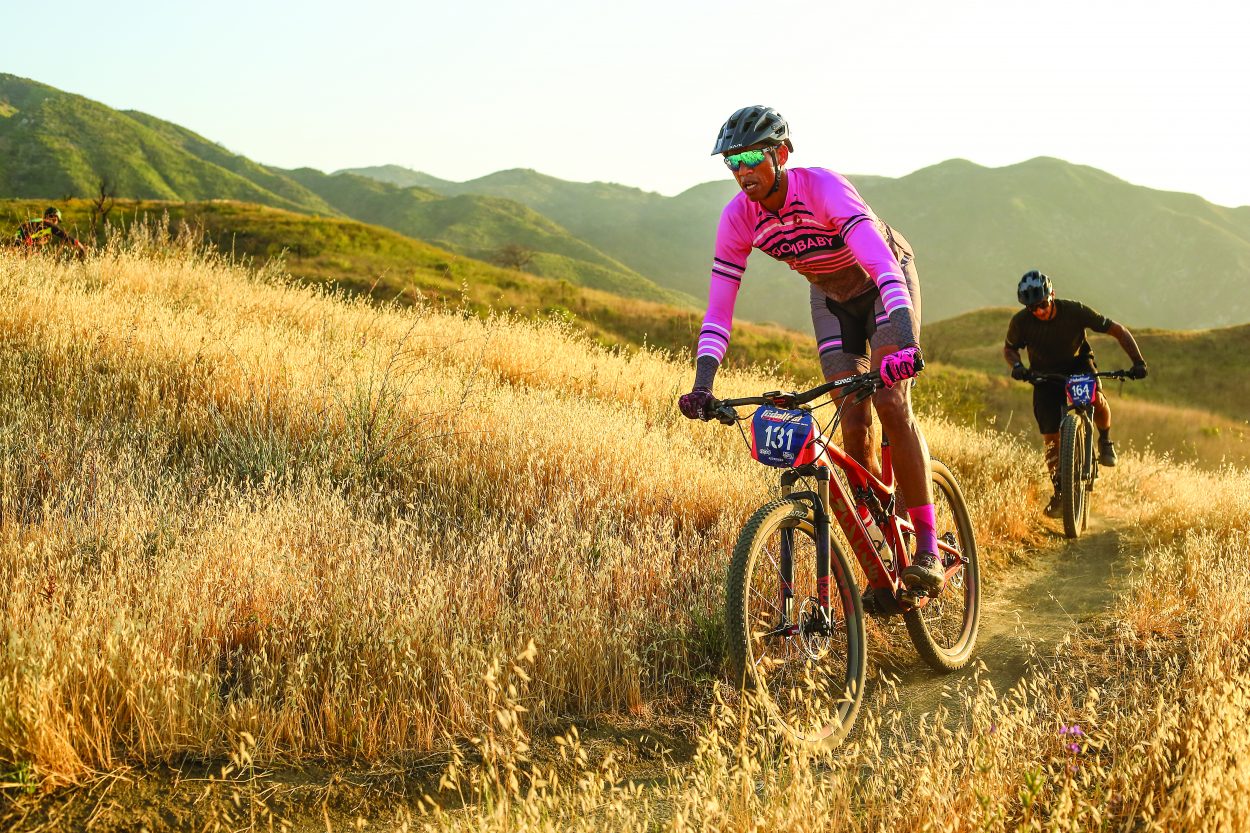 Basketball legend Reggie Miller, putting the hurt on the competition at a PedalFest race series event in Santa Clarita, California.

MBA: You were one of the greatest basketball players in history. You’re also 6 feet 7 inches tall. How did you get into mountain biking?

Reggie Miller: Yeah, being 6-foot-7 is not ideal for MTB, but I make it work. I had never mountain biked before I moved to Malibu during the summer of 2000. My first morning I was at a restaurant called Coogie’s (now Ollo), and Tim Commerford, the bassist for Rage Against the Machine, came over and introduced himself and suggested I go riding with him and a few buddies. Those buddies turned out to be Laird Hamilton [the big-wave surfing legend] and Don Wildman [the now-late founder of Bally Total Fitness]. Tim loaned me one of his Giant trail, flat-pedal bikes. It was the hardest ride I had ever done, not because of the terrain, but because I wasn’t used to the climbing and shifting. Mind you, I was still playing for the Indiana Pacers at the time, so my fitness was good, but those guys left me in the dust. But being on those trails and in those hills got me hooked.

MBA: Where did you and your friends find a mountain bike that would fit you?

Reggie: So finding a bike to fit me has been an ongoing issue. My first bike after Tim’s loaner was a Giant 26-inch wheel trail bike. That’s when I learned to get clipped in for the first time. It served its purpose, but I was too big for that bike. So, my first shop, Serious Cycling, suggested I build a bike. We went with Moots, and they built up a fabulous bike that was my first real bike—29-inch wheels, full suspension. I kept that bike and rode that like crazy for five to six years. I connected with Mo Awesome from Instagram, and he steered me towards the Santa Cruz line and helped build my XXL Tallboy. Santa Cruz has been my official bike sponsor ever since. They also built my XL Blur, which I currently race. 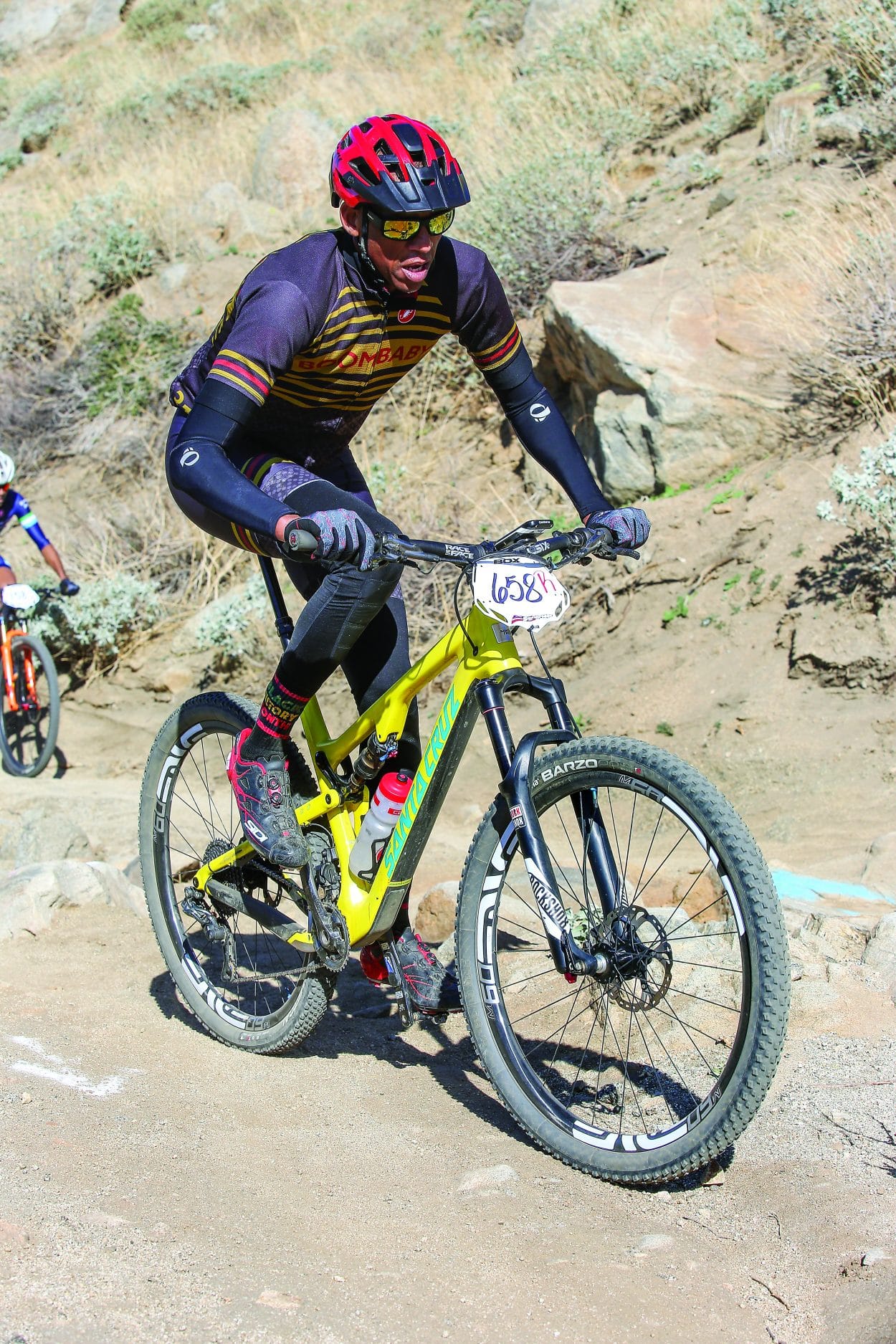 Racing in Fontana, California, in February of 2018. His Boombaby riding gear company raises money for former pro basketball players who are suffering financially after retiring from the sport.

MBA: How did you get into racing mountain bikes?

Reggie: I got into racing really on a whim. George Mota from Redzone Racing contacted me on Instagram, asking if I wanted to partner up with him in a local race called Turn and Burn at Bonelli Park. He told me we would take turns doing the course for six hours, so I took a leap of faith and said yeah. I didn’t know what to wear, what to bring, food, water, etc. If memory serves me correctly, this race was the first time I had ever worn Lycra tights and a kit. Also, we didn’t come in last, which I was ecstatic about.

Reggie: The reason I love racing is it fuels my competitive juices that used to come from basketball. I don’t race other racers; I normally focus on racing the course and just trying to achieve my personal time goals.

MBA: You give a lot of credit to Canadian Sonya Looney for coaching you. You live in the Malibu hills near Los Angeles with your wife and family. Sonya lives in Canada with her husband. How did you happen to find her and have her start coaching you? 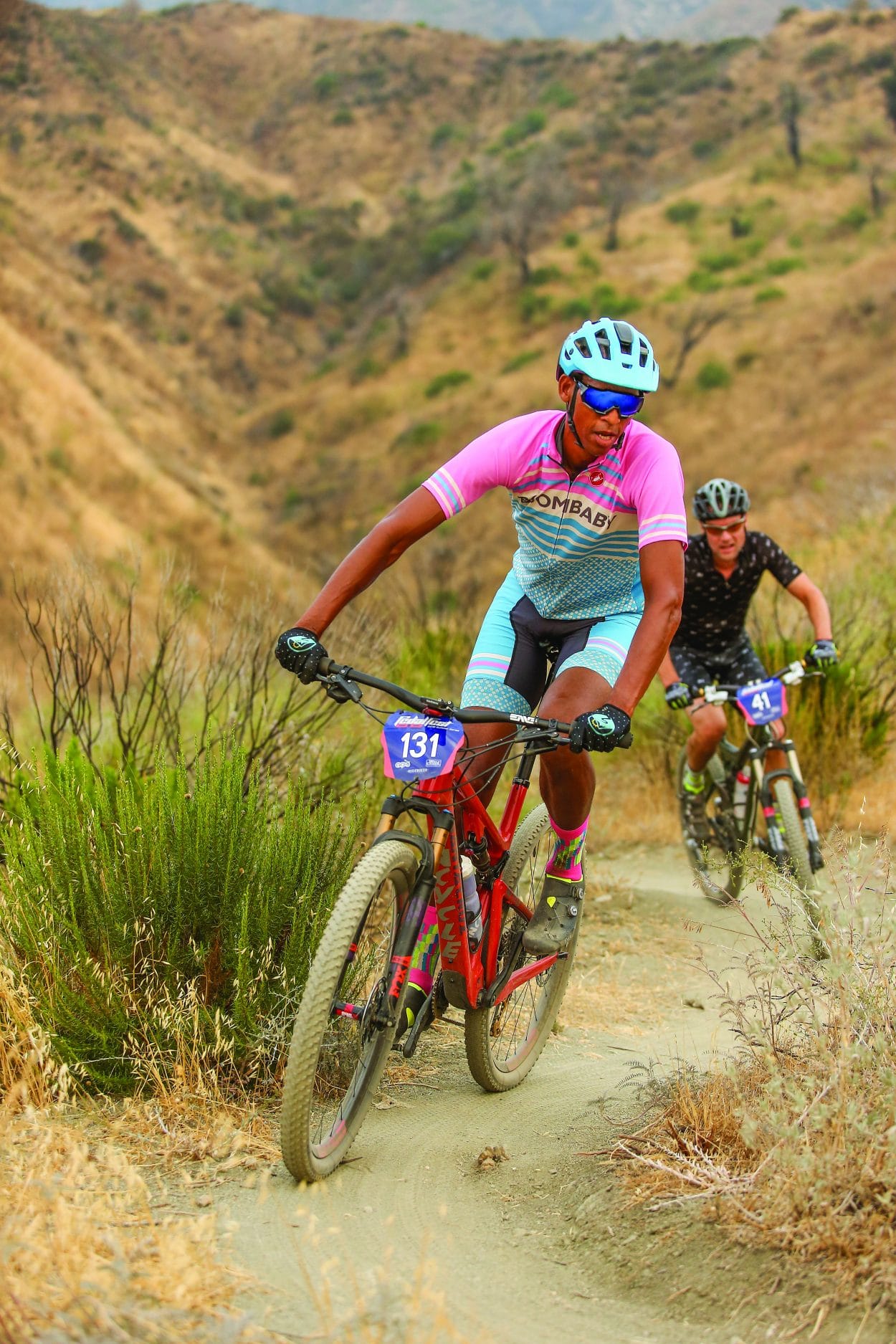 One of the greatest players in basketball history, Reggie loves the thrill of racing mountain bikes now. He wanted to be a pro baseball player until he was in 10th grade, then he shifted his focus to basketball, but mountain biking is what stokes his competitive fires now.

Reggie: Sonya Looney is the number one reason I stayed with mountain biking. I saw an article/profile in your magazine about her. She talked about her mental aspect to mountain biking. I loved how driven and passionate she was about the small intricacies of racing. After reading that, I said to myself, “That’s the kind of mountain biker I want to become.” So I reached out to her on social media; to my surprise, she responded quickly. At first I asked her little questions about bike setup, riding styles, equipment, etc. That led to a phone call where she still didn’t really believe it was “Reggie Miller” asking her about MTBing stuff. It took her husband Matt Ewonus, a baller up in Canada, to convince her, “Yes, honey, that’s really Reggie Miller asking you these questions.” So that first Turn ’n’ Burn race with George Mota, it was Sonya who told me to wear the Lycra, what gels, food and how much water to bring. That’s when she was officially my coach. In my early mountain bike journey, Sonya helped me with my confidence. There were times when I was ready to fold the tent and go home, but her positivity kept me in it. She set up early interval schedules for me, but I had no idea what I was doing. Matt and Sonya came to California for a weekend of riding all my favorite Malibu trails; it was the best weekend of my life. I got to see up close and personal how a true professional goes about her craft. Sonya will always be my coach. I felt bad bugging her with questions on stupid, basic things, but she was always willing to help me, so now she’s my coach and mentor. If you’re serious about MTBing, I suggest you reach out to Sonya or any of your MTBing heroes. You never know where it may lead.

MBA: You have another coach, Jason Siegle, whom we met at one of the Pedalfest races at Lake Castaic recently. How does he help you as a coach? How did you find him? What kind of coaching does he give you?

Reggie: So, Sonya Looney, as explained, is now more my coach/mentor. Jason Siegle from CTS [Carmichael Training Systems] Santa Ynez Train Right has taken over the everyday job of training me. Jason sets the ride schedule, the race game plans, the tutoring, all the training. He was suggested to me about a year ago. Holly Breck, another rider from my Incycle Bike Shop, told me I should get my VO2 tested. I had no idea what she was talking about. She made the call and set up the appointment. That testing and visit with CTS changed everything for me. Jason knew the relationship I had with Sonya and didn’t want to ruffle any feathers, but it was Sonya who pushed me towards this more progressive hands-on training. I’m lucky to have both coaches push me.

MBA: Do you ride with Jason very often?

Reggie: I’ve ridden with Jason on several occasions. He even rode with me during my intervals to make sure my cadence and watts were up to speed. We’ve even raced together—he in the Pro/Elite and I in my Cat 2.

MBA: What is your job as a pro basketball TV commentator like? How much time does that require of you in your annual schedule?

Reggie: Training around my TNT commentating job can be tricky. My normal schedule is to leave Wednesday for travel, work my Thursday Turner game and come home Friday mornings. So, Jason usually has me ride every day except Wednesday and Thursday. A lot depends on where my games are, East Coast or West Coast, but we’ve made it work thus far. 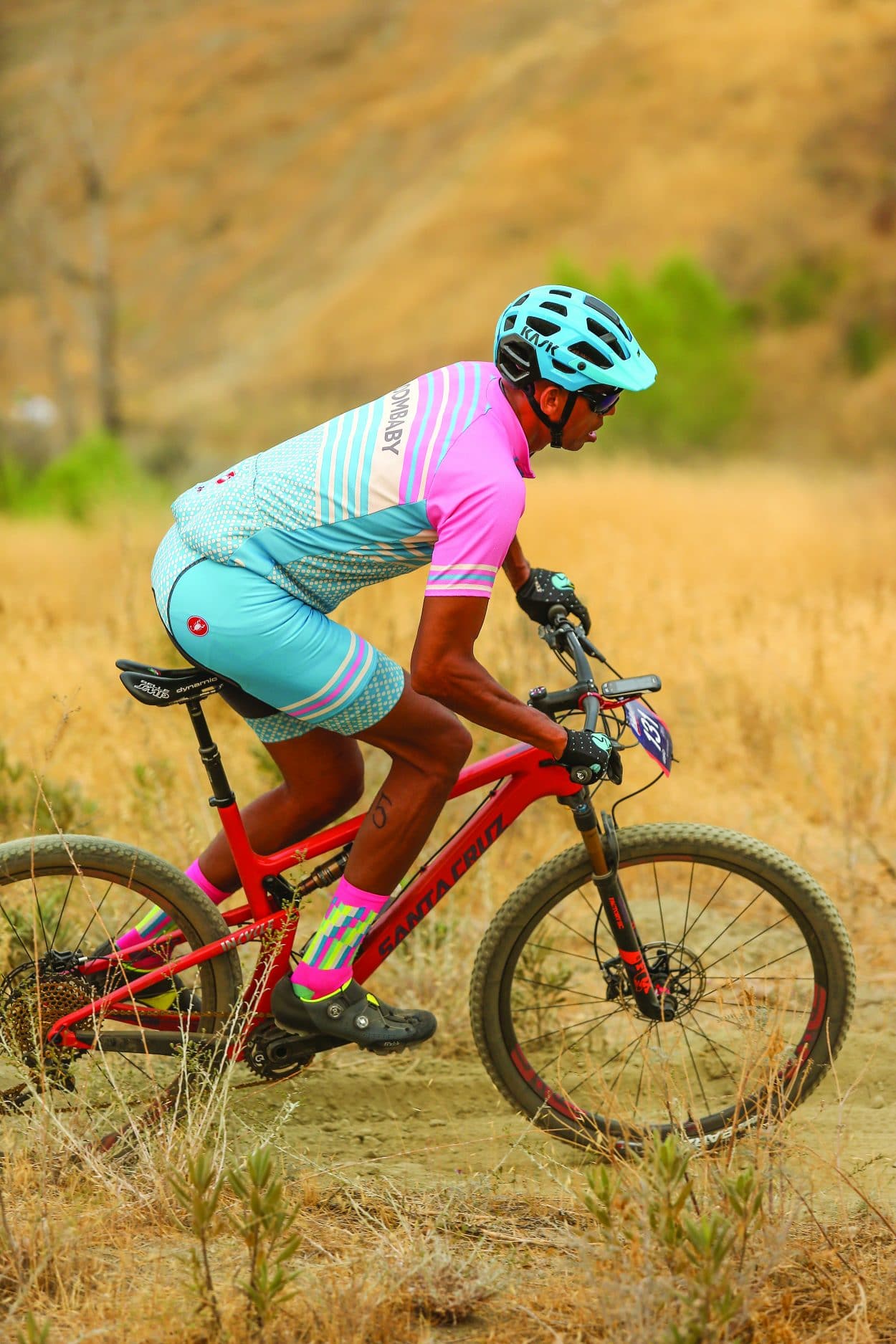 Reggie says he first tried mountain biking in 2000, and he’s totally hooked now. He races pretty much every chance he gets, whether it’s a mid-week afternoon race in the nearby mountains or a multi-hour endurance race.

Reggie: I love racing and competing, but I’m still new to this sport, so many things I need to learn on and off the bike. So, I don’t worry about winning my races. Don’t get me wrong; any time you can step on a podium it’s cool, but I’m more focused on becoming a complete rider. I want the stamina and drive of a Sonya Looney, the focus of a Kate Courtney, the downhill precision of an Aaron Gwin, the toughness of a Kyle Strait. These are just some of the pros I want to be like. I’m new to this, and I have to earn my stripes. So, every race now I learn something new. Podiums will happen when I become complete, and that may never happen, but as long as I’m consistent in my game plans, I’m happy.

MBA: What kind of advice would you give to other people who are thinking about racing mountain bikes?

Reggie: If you’re on the fence about racing mountain bikes, I say absolutely take that leap. Do your research on your local races. Sign up as a beginner (like me), and go out and have fun. Don’t focus on results. Focus on the new friends and all the smiling you will be doing going downhill.

MBA: Can you share your age, height, weight and any other things that our readers might find interesting?

MBA: What’s the story with your new Boombaby line of sportswear? Who was the announcer who first started using that phrase when you were playing basketball?

Reggie: Bobby “Slick” Leonard is the HOF coach of the ABA Indiana Pacers. They won three championships back in their heyday. When I was drafted by the Pacers in 1987, Slick had moved into the television/radio booth and commentated all my games. His favorite catchphrase when I made a big three-pointer was “Boom, Baby!” All of Indiana knows this, and that’s where I came up with the Boombaby kits. I wanted to help out those ABA pioneer players who helped pave the way for players like myself. So, all proceeds from the Castelli kits/bibs/MTB jerseys go towards helping these men who have fallen on hard times. I also match whatever the total is.

MBA: Can you tell us how your bike is set up?

Reggie: So, for my bike setup, I’m running the Santa Cruz Blur frame, size XL, with a Fox Factory Step-Cast 32 fork in the front. For the bars and stem, I am running Enve as well as Enve M525 wheels with DT Swiss hubs and custom decals on the rims. To keep me rolling fast and smooth, I have the Vittoria Mezcal and Barzo tire combo and Orange Sealant to keep me from getting flats. Now, on to the drivetrain. I am using the full SRAM XX1 Eagle with the Quark Power Meter in the cranks, and to keep it buttery smooth I’m using the Kogel bottom bracket and pulleys. The brakes are also SRAM Level Ultimates to match the rest of the groupset. And last, where I make contact, I’m using some RedMonkey Chunky grips and a Selle SMP Dynamic seat to get me through the long rides on the bike. 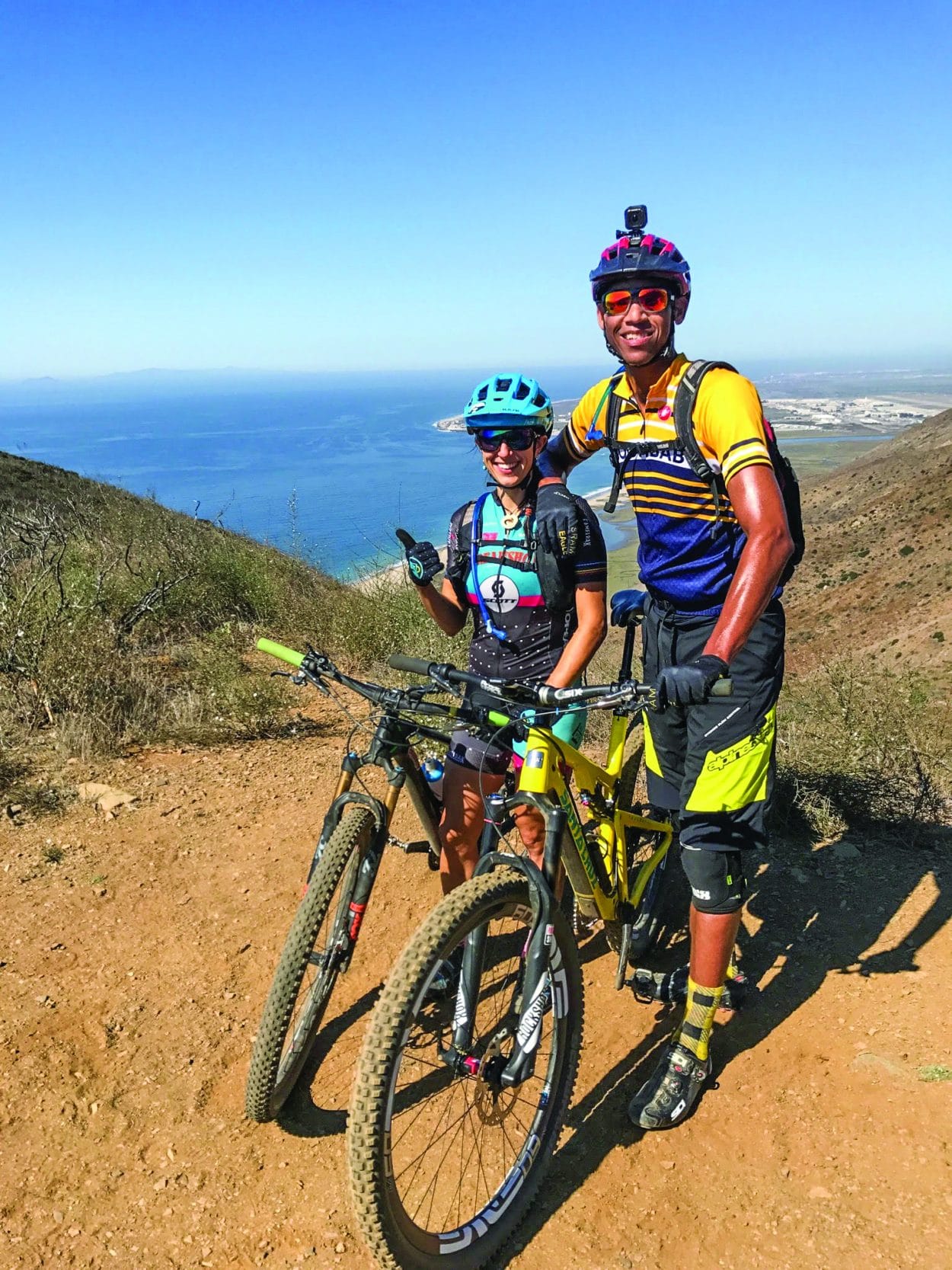 Reggie and Sonya: Sonya lives in Canada, while Reggie lives in Malibu, California. This was the only time they’ve actually ridden together. Sonya and her husband flew down to Southern California so they could all go riding together. Photo courtesy: Reggie Miller