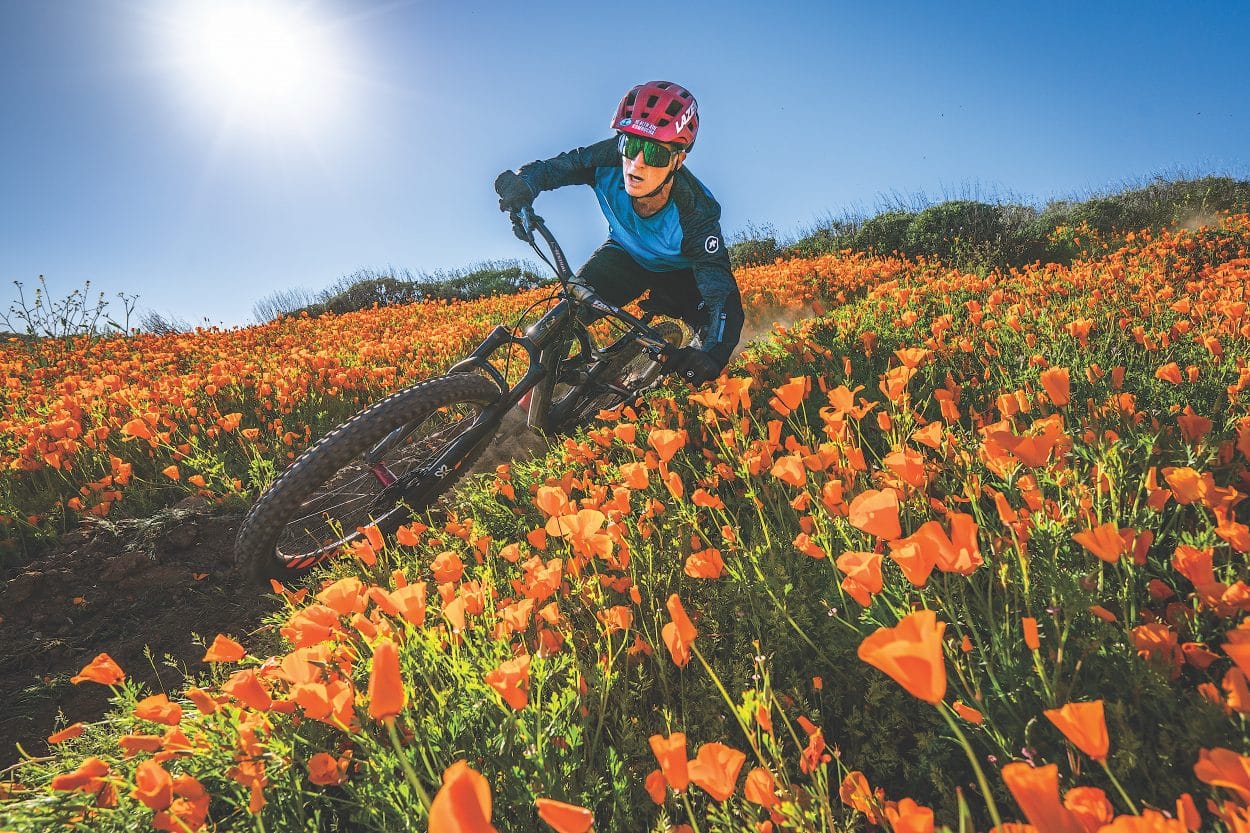 Brian, carving a high-speed line on a narrow trail.

Anyone who has lived in Southern California the last decade has undoubtedly heard the word “drought” a few hundred times during their time here. The record-breaking drought started in December 2011 and, after 376 weeks, finally came to an end March 5, 2019 (according to the California drought government site.) Of the 20 different regions in Southern California where rain data is collected, 18 have seen precipitation far above that of a normal rainy season (the rainy season is from June until March). Keep in mind that California has not had a “normal” year of rainfall since 2011, and the numbers become far more significant. 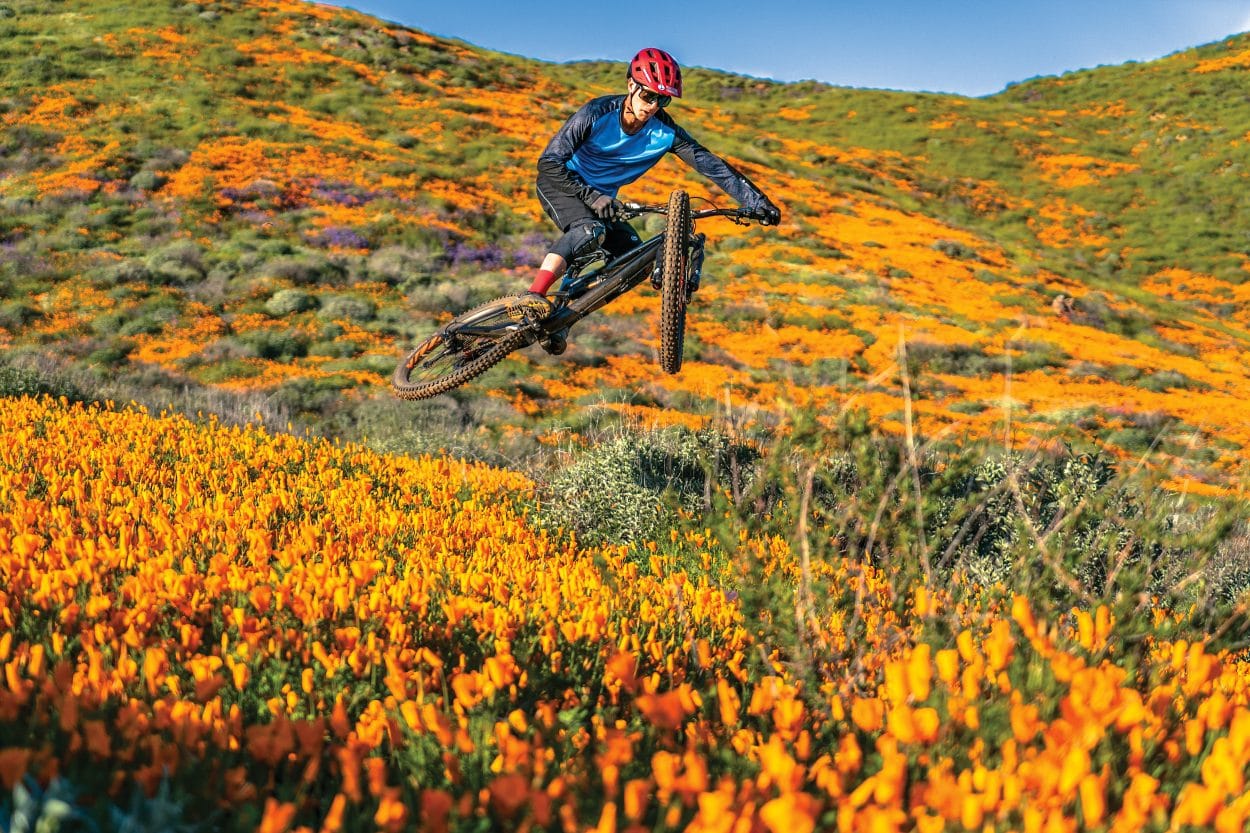 This huge influx of water has brought about a massive superbloom, one not seen on this scale in decades. One of the regions that has been most affected is the city of Lake Elsinore, a subsidiary of the aforementioned Riverside County. The hillside off of the 15 freeway in California has exploded with wildflowers. While this is great news for California residents as a whole, Lake Elsinore residents have been inundated with travelers from all over eager to experience this possibly once-in-a-lifetime event. According to the Twitter account of the city of Lake Elsinore, all exits related to the superbloom have been closed, and a shuttle has been created to transport visitors to the fields. The site estimates that up to 20,000 people used the Elsinore shuttle service alone for the weekend of March 23–24. This does not account for the thousands of visitors who circumvented the shuttle to find their own way to the fields. Wait times, according to the site, are up to two hours for the shuttles.

While going to see the superbloom only requires a lot of patience, riding bikes through it presents an entirely different challenge. None of the main regions hit with the superbloom allow for bikes, and even if they did, there are no trails available anyway. In order to ride bikes through the superbloom, you would have to find a spot tucked away from all of the visitors that offers preexisting trails to ride on so as not to destroy the flowers. 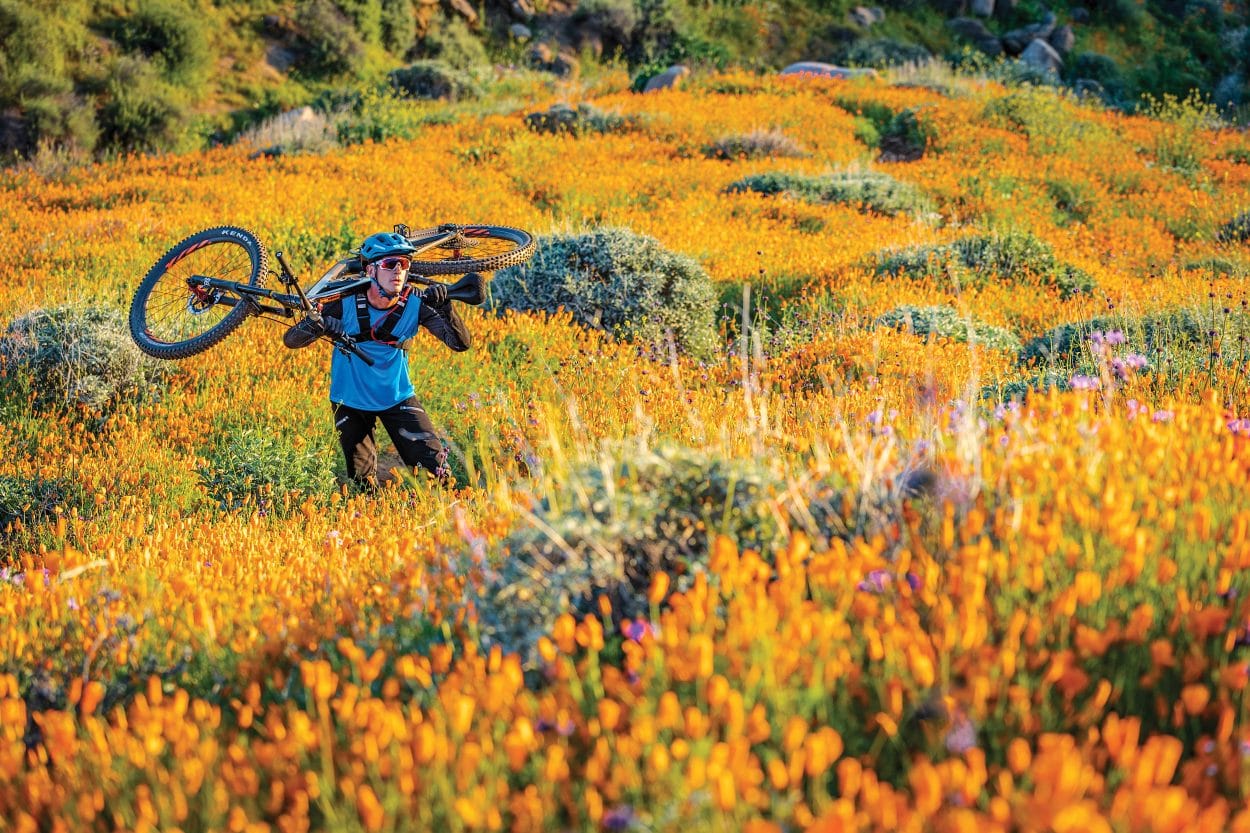 Hiking back up for another run.

It was a typical day after some rain, and I was driving out to my buddy Colton Haaker’s house to go ride moto. For whatever reason, there was way more traffic this Saturday morning on the freeway near Lake Elsinore than normal. I thought there was probably an accident or road work, but then started seeing all these cars parked on the side of the road parallel to the freeway and hundreds of people walking around the hills. I didn’t really give it much thought, as I was in a hurry to get to Colton’s house so we could go riding in these prime conditions. Once out in the hills riding, it dawned on me why all those people were walking in the hills. Large sections of the trail were being overtaken by these beautiful flowers, and they were everywhere. The hills were literally glowing orange with hints of purple so dense that it was hard to see the trail in some areas. The benefit of exploring in hard-to-get-to places is that there wasn’t a person anywhere in sight.

As an athlete who isn’t racing full-time anymore, one of my duties is to create content and get media coverage for the companies I represent. Sponsors are always looking for great pictures, and it’s not getting any easier to find different zones and landscapes that haven’t already been shot. I like being unique in my riding, and one of the best parts about this era of my career is being able to be creative and selective. I now have the choice to ride, build and shoot the areas and obstacles that I want. I’m not confined to the racecourse put in front of me. I knew instantly I had to come back and capture this beauty nature was providing us, because these photos would be like nothing I’d ever seen before. 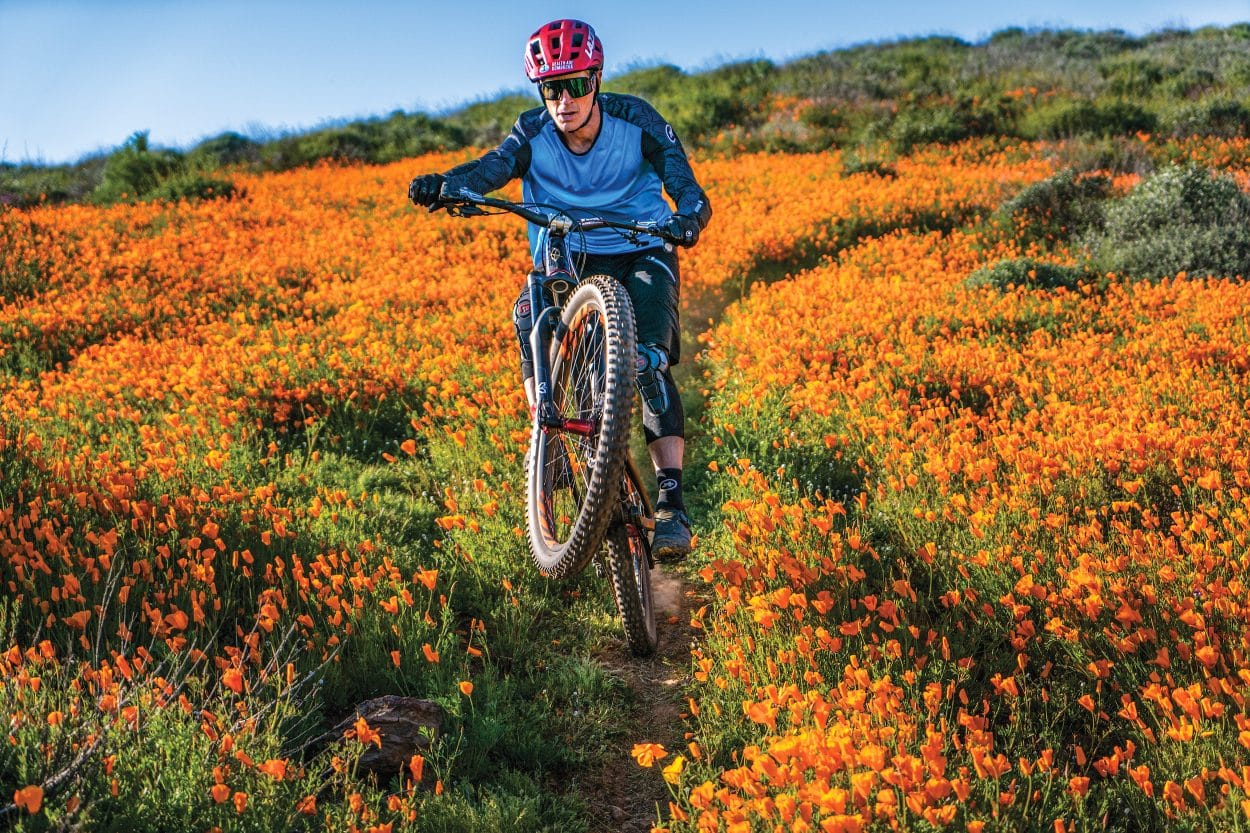 Being careful to spare the flowers on a narrow trail.

My first call was to Brian at Shreddyshots to see if he had time in the next couple of weeks to get out there and shoot. I wasn’t sure how long these flowers were going to be in bloom, but I knew I didn’t want to miss this opportunity. With his schedule open the next two weekends, I didn’t waste any time getting back out there on the moto with my buddy John Levey. My sole intention this time was to find a few spots that were easily accessible for Shreddyshots to drive into.

After a half day out on the motos scouting, doing a bit of shovel work, the locations were chosen—three spots close to one another, all sections of trail that were engulfed in California poppies. A few small berms and jumps were made, rocks were cleared, and the stage was set to capture the most colorful photos I’d ever taken.

The day of the shoot, the plan was to leave early, giving us plenty of time to get the shots while the light was perfect. Good thing we left early, as the traffic was even worse than anticipated. Shreddyshots was concerned about crowds being out viewing the superbloom, but I reassured him over and over that nobody would be way out where we were heading. After nearly three hours in the car and some overly aggressive off-roading in Brian’s Subaru, we made it to the location. 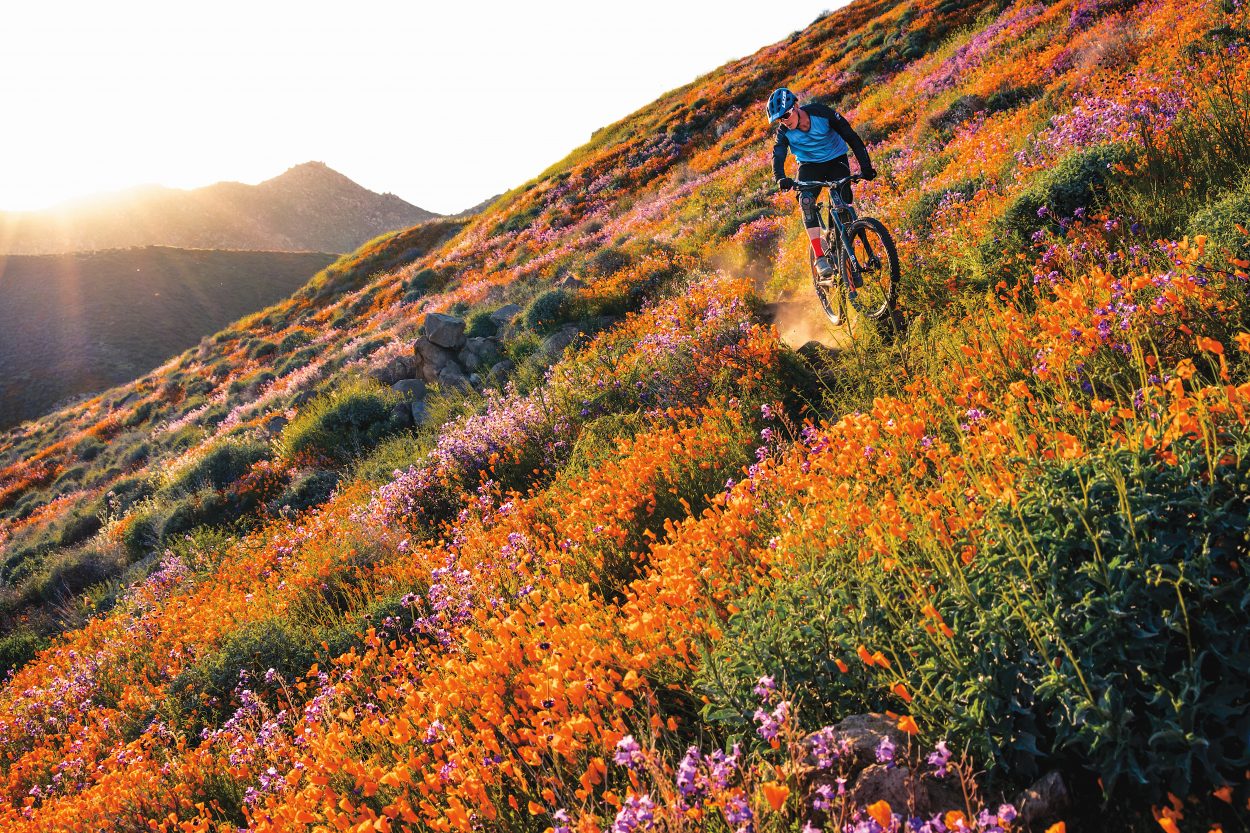 Lopes, taking a “poppy” line through the poppies.

From a photography standpoint, it was an amazing zone, but after my awe wore off, I had to start figuring out logistics. Lopes was very careful to find pre-existing trails so as to not harm the natural environment as a rider, and I was determined to do the same as a photographer. I sat and looked up at the spot, figuring out where I could shoot, and, more important, how to get to each specific location. I would hop over boulders, cacti and some basic shrubbery to find a good camera angle.

I divided the zone into three parts: a berm turn at the end, a straightaway in the middle and a jump that preceded it. My goal was to get some tight photos among the flowers and some of the whole landscape. Usually, I will move around a lot for one particular feature, but moving around was so difficult that I pretty much had to pick one spot and make it work. Due to the ridiculous traffic, time started to become a factor. I shot with flash for the close-turn photos, as they were backlit, but setting up flashes was taking up too much time. All of my other shots were away from the sun, which allowed me to use natural light.

As the daylight started to slip, we moved from the first location to a second spot further in the canyon. The second landscape was even more spectacular, as it had beautiful purple flowers littered among the poppies. Again, I had to try to figure out where I could shoot from so as not to disturb the environment. Making it more difficult, Colton Haaker was out there shooting video with a crew, so I would have to clear out of sight between each take. I knew I wanted to shoot towards the sunset, as I thought it made the shot more interesting. I also knew that I could get the sun to burst throughout the photo, which would illuminate the flowers. 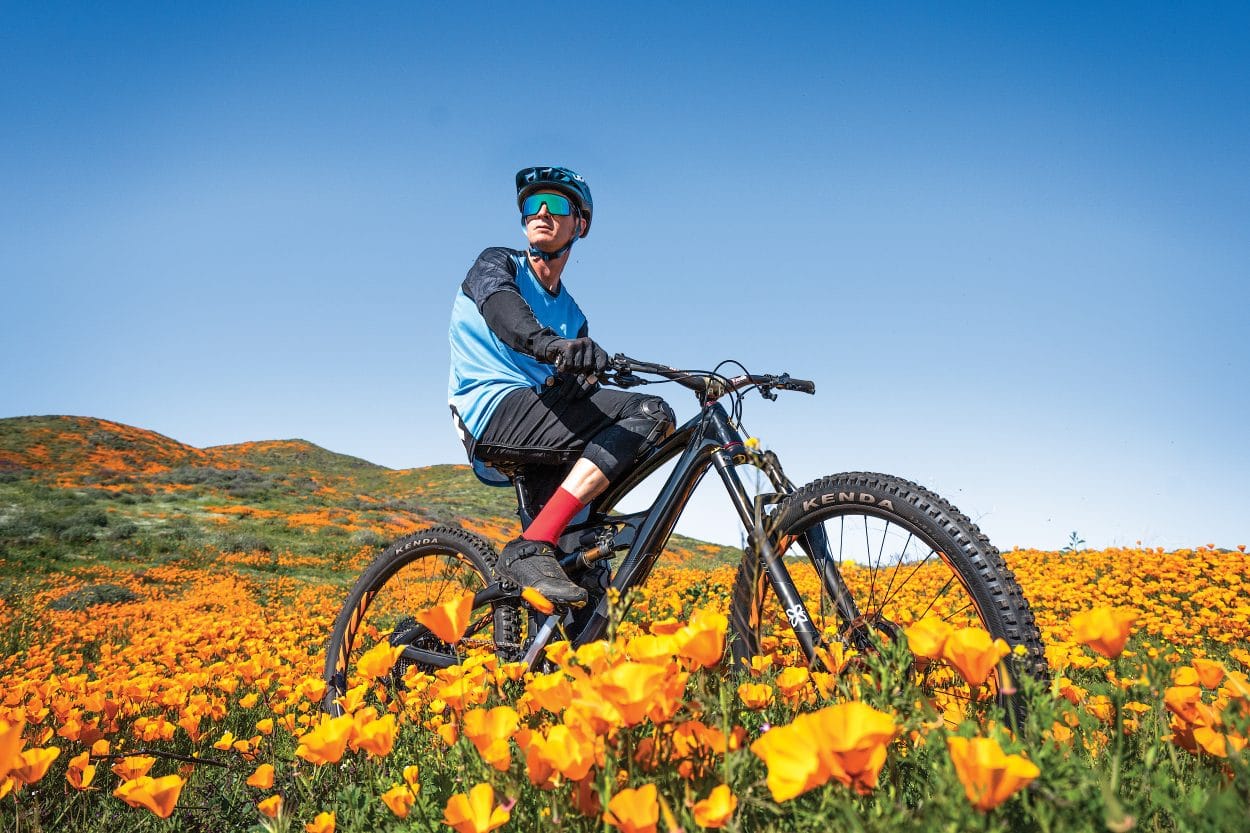 Brian, checking out the view.

The flowers were so tall that it was hard to find a window where you could get away from the rider enough to get the whole hillside while also getting Lopes. On top of that, the light was starting to get close to the horizon, and I needed to find an area where there was some action. I found a spot with a turn and a tall boulder near it where I could stand above the growth. I wanted to set up flashes, but with limited time and Colton shooting between takes, I knew it was not possible. Before the turn, there was a little boulder, and Lopes did a great job of popping off the rock and then railing the turn. This gave me a jump shot, a turn shot and a shot of him riding towards the valley. We got three runs at it before the sun was gone and the shoot was a wrap.

I felt fortunate that Lopes brought me along for such a unique experience. The pictures turned out even better than I think either of us expected. Hopefully, you love them as much as we do, and this inspires you to get outside, ride, explore and experience the beauty of this earth.