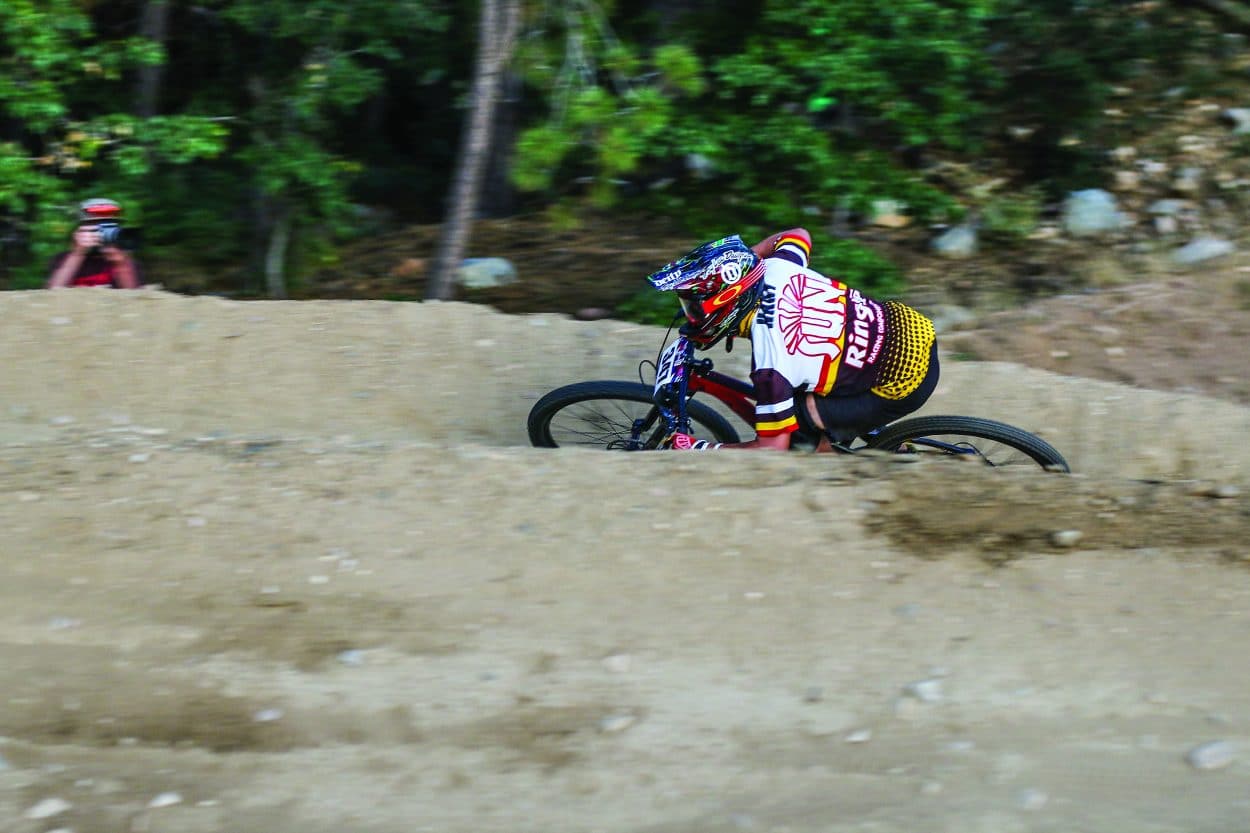 THE REASON TO MIX WHEEL SIZES

The claim is that a bike with mixed wheel sizes can benefit from the advantages of each wheel size. Using a 29-inch wheel in the front helps the bike roll over obstacles better and a 27.5-inch wheel in the rear increases acceleration and responsiveness. The combined benefits are better cornering performance from a front wheel that feels planted and a rear wheel that remains lively. 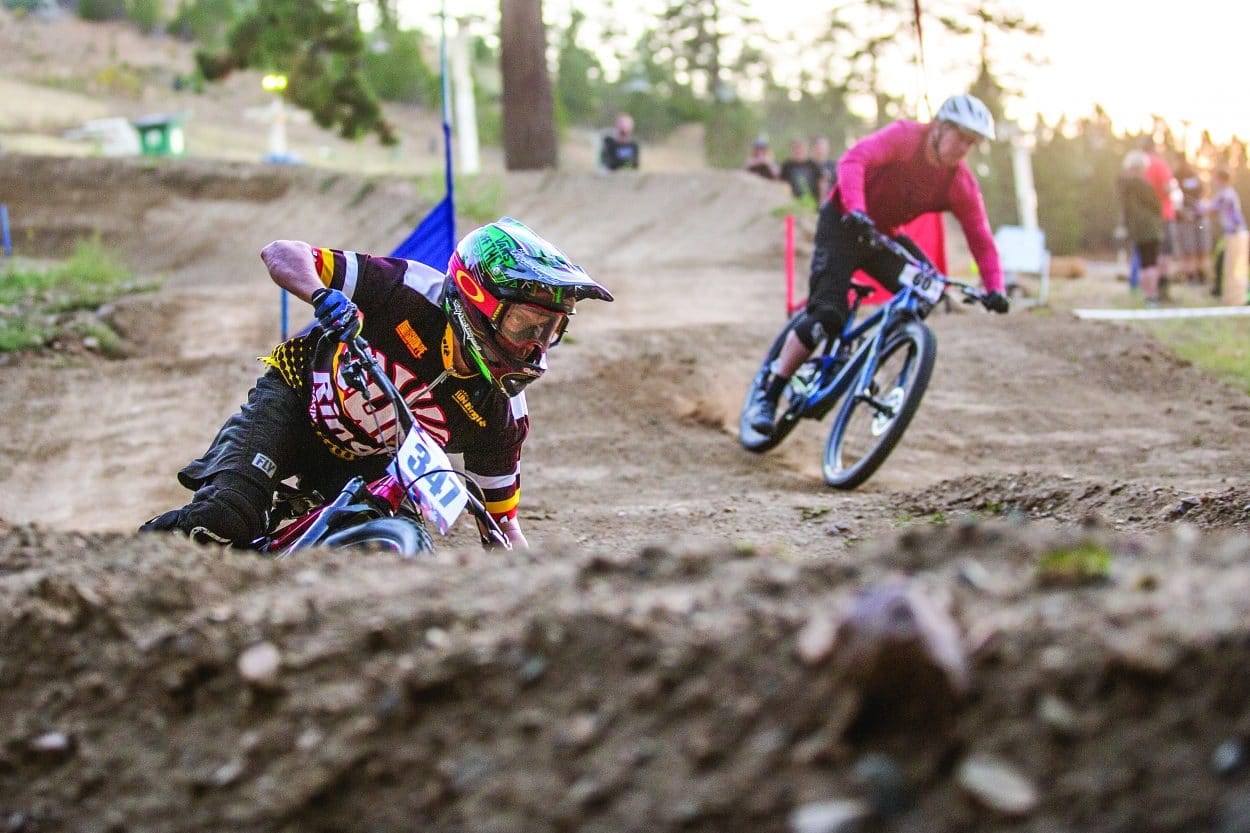 When I decided to enter the Fox U.S. Open of Mountain Biking’s dual slalom, it was just a few days prior to the event. Although slalom is rarely contested today—Crankworx and the Sea Otter Classic being the only major exceptions—I still look back fondly on the many iconic races held at Snow Summit during the golden age of slalom in the late 1990s. With slalom master Kyle Strait providing input on the course, I knew I was ready for a blast from the past; I just needed a race bike!

A dual-slalom track is comprised of some berms, jumps and a couple of flat turns for good measure. The goal of slalom is to determine the best bike handler in a side-by-side race that typically takes under 30 seconds—think BMX meets ski racing. The ideal bike for dual slalom usually has 27.5-inch or even 26-inch wheels and less than 130mm of suspension travel. The goal is a snappy, quick-handling bike. Side note: Pro U.S. Open Dual-Slalom winners Austin “Bubba” Warren and Jill Kintner rode sub-130mm-travel, 27.5-inch bikes.

However, I found that replicating a pro’s setup on short notice would be a challenge. As trends would have it, the majority of bikes accessible to me in the current MBA test fleet all had 29-inch wheels. It was clear some improvisation would be in order. 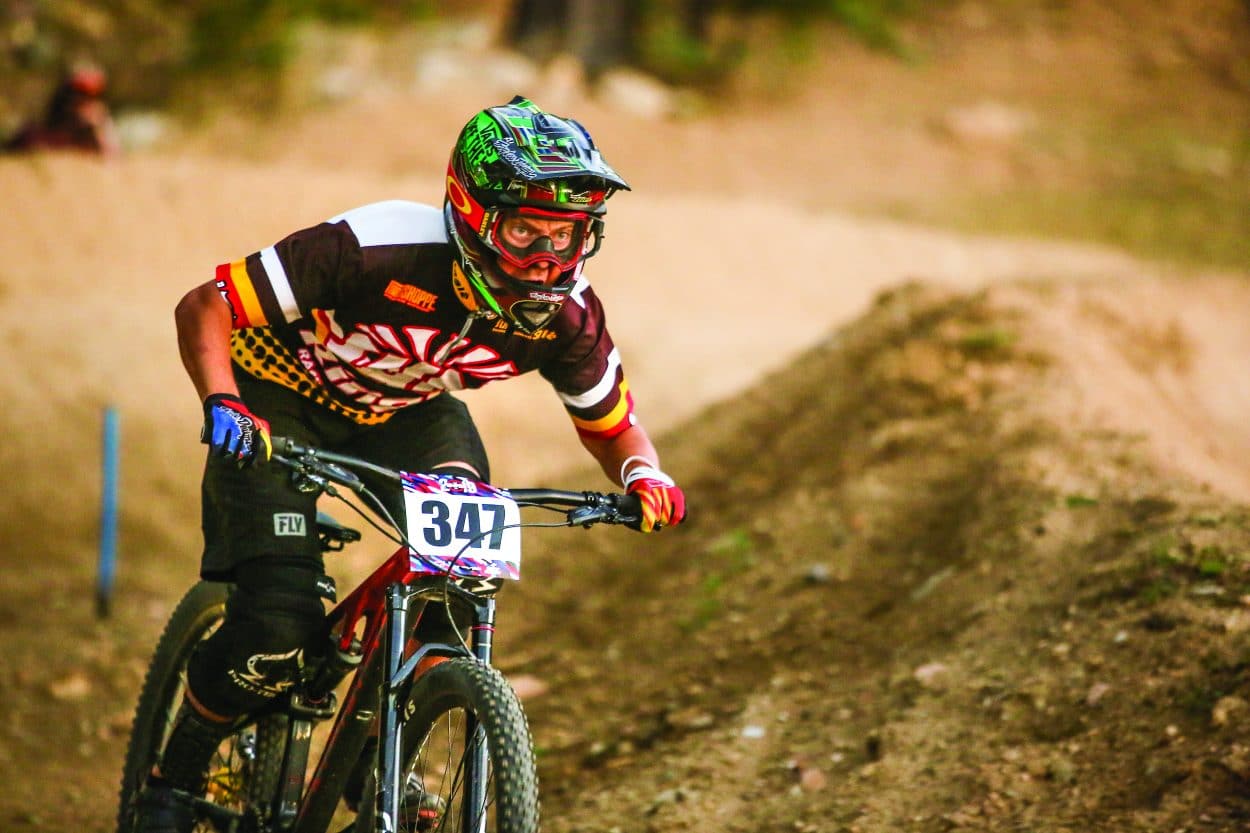 COULD A HOMEMADE MIXEDWHEEL BIKE BE CREATED?

With the USO dual-slalom race in mind, I began to think: Could I optimize one of the wrecking crew’s 29-inch test bikes for slalom? Sifting through previously tested tires—looking for a low-volume, fast-rolling tire that might work well for the dry, hardpack conditions I remembered of Big Bear—I came across an enticing tread pattern. The only problem was that the tire was a 27.5; however, I thought the problem might actually be an opportunity. So, I began to think again, “What if…?”

What if I replaced the rear wheel on my chosen 29-inch bike with this 27.5-inch wheel and tire? I wondered if the smaller rear wheel could improve the acceleration and turning performance—and I was ready to find out.

Before riding my homemade mixed-wheel bike—a stock 29-inch Norco Revolver FS 1 120, now with a 27.5-inch rear wheel—I wanted to understand how the geometry was affected, so I took some measurements. The bike was now lower and slacker. The bottom-bracket height decreased by nearly an inch (0.8 inches to be exact), and the head-tube angle relaxed 1 degree. I knew these changes could potentially increase the bike’s aggressiveness in corners, as dual slalom requires, so I headed out to my local trails to test my theory.

I love the stock 29er Revolver, which is why I chose it as my potential slalom race rig, and my theory that the lower and slacker bike would change direction better was immediately confirmed. From the first few turns, I found that I had indeed enhanced its already lively feel with the 27.5-inch rear wheel. My 29/27.5 Revolver was slashing turns and accelerating through rollers with an all-new sense of purpose. This bike was ready to race slalom!

However, I needed a longer test ride to find out if the bike was possibly too low. I wondered if it would suffer from excessive pedal strikes now that the bottom-bracket height had dropped from 13.4 inches to 12.6 inches.

It was only a few days before the U.S. Open now, but I was able to go out for a few two-hour trail rides through varying terrain and conditions beyond what I’d experience on the U.S.O. slalom track. Although I did experience a few pedal strikes on each ride, they were always limited to contact with roots and rocks on technical climbs—neither which would be found on the slalom track.

I was beginning to like the potential of my slalom race bike for the U.S. Open. Taking my testing one step further, I began to focus on corners. In sharp turns, I exaggerated my lean angle while trying to begin pedaling early in the exit of each corner. Ultimately, I was unable to cause any pedal strikes that would give me concern.

The only negative effect was that the slacker geometry, specifically the now 73.9-degree seat tube angle, created a slight drop in climbing performance. But remember, the purpose of this mixed-wheel bike was to race dual slalom. With no climbing on a slalom course, my 29/27.5 Revolver got the nod to go racing! 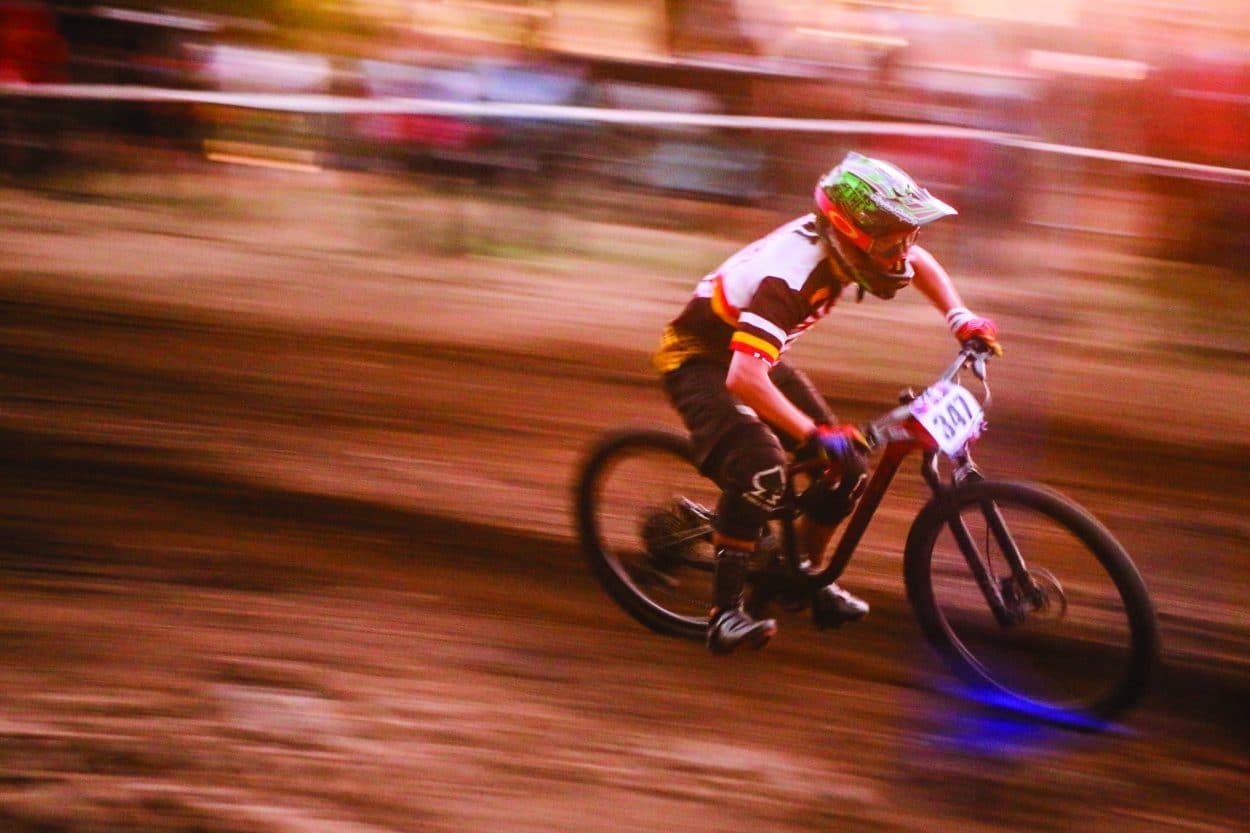 CONCLUSION? THE JURY IS STILL OUT…

I’m happy to report my homemade 29/27.5 mixed-wheel bike performed flawlessly at the U.S. Open dual slalom race. After a nearly 20-year hiatus from racing, I returned to competition—qualifying second in the Vet 40+ division, I was able to work my way through the rounds before ultimately taking the bronze medal in the finals! The 27.5-inch rear wheel helped acceleration out of the gate—and further down the course, the 29-inch front wheel helped carve through the final flat corners; however, for the next dual slalom, we’ll plan ahead and hopefully procure a 27.5 bike that’s ready to battle for the win in stock form.

As for the homemade mixed-wheel bike, would I do it again? As a mountain biker, I’m inclined to tinker, so I’m already thinking of my next mixed-wheel experiment. Of course, it would be more advantageous to use a 27.5-inch bike—that way I could benefit from the 27.5-inch bike’s shorter chainstays, and then mount a 29-inch fork and wheel. Stay tuned!

Disclaimer: Although this homemade 29/27.5 mixed-wheel bike was simple to create, use caution before creating your own. Any such modification, like altering wheel size, will void the manufacturer’s warranty. Bike companies create strength standards for each model based on the bike’s stock specifications. In this instance, the slacker head tube put more stress on the frame, and therefore the manufacturer would not be able to guarantee its durability. 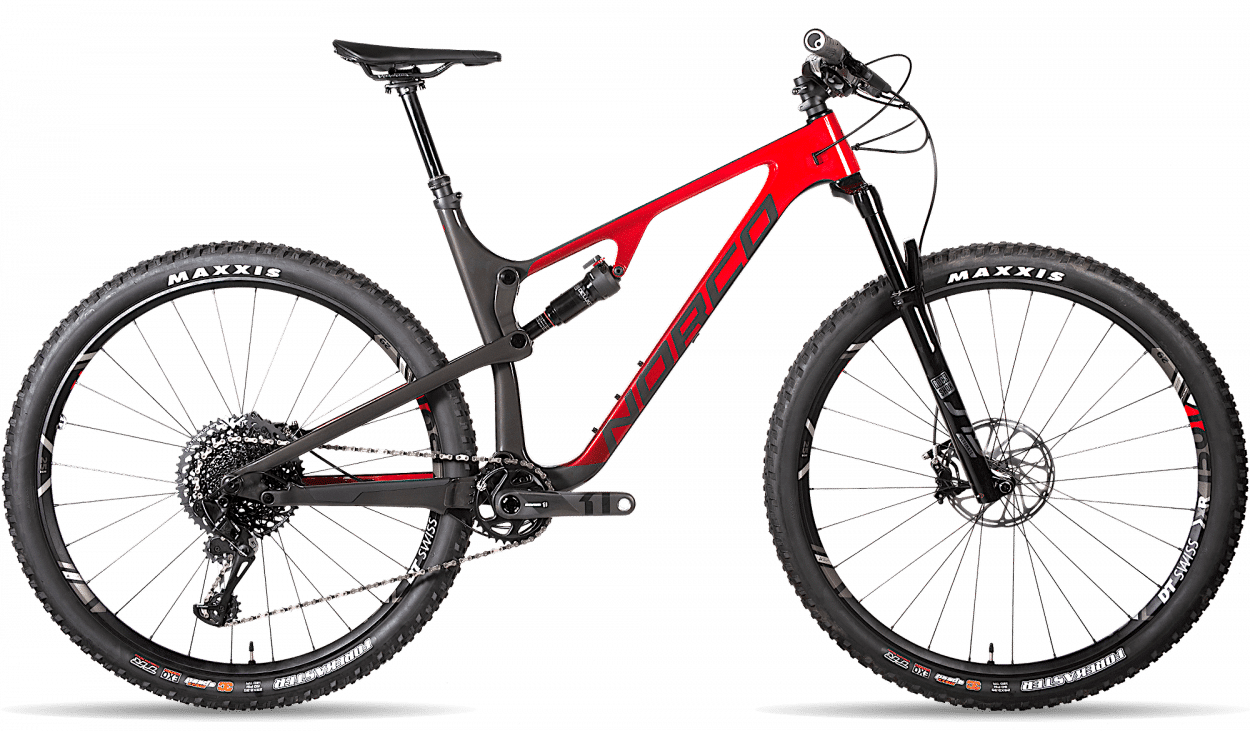