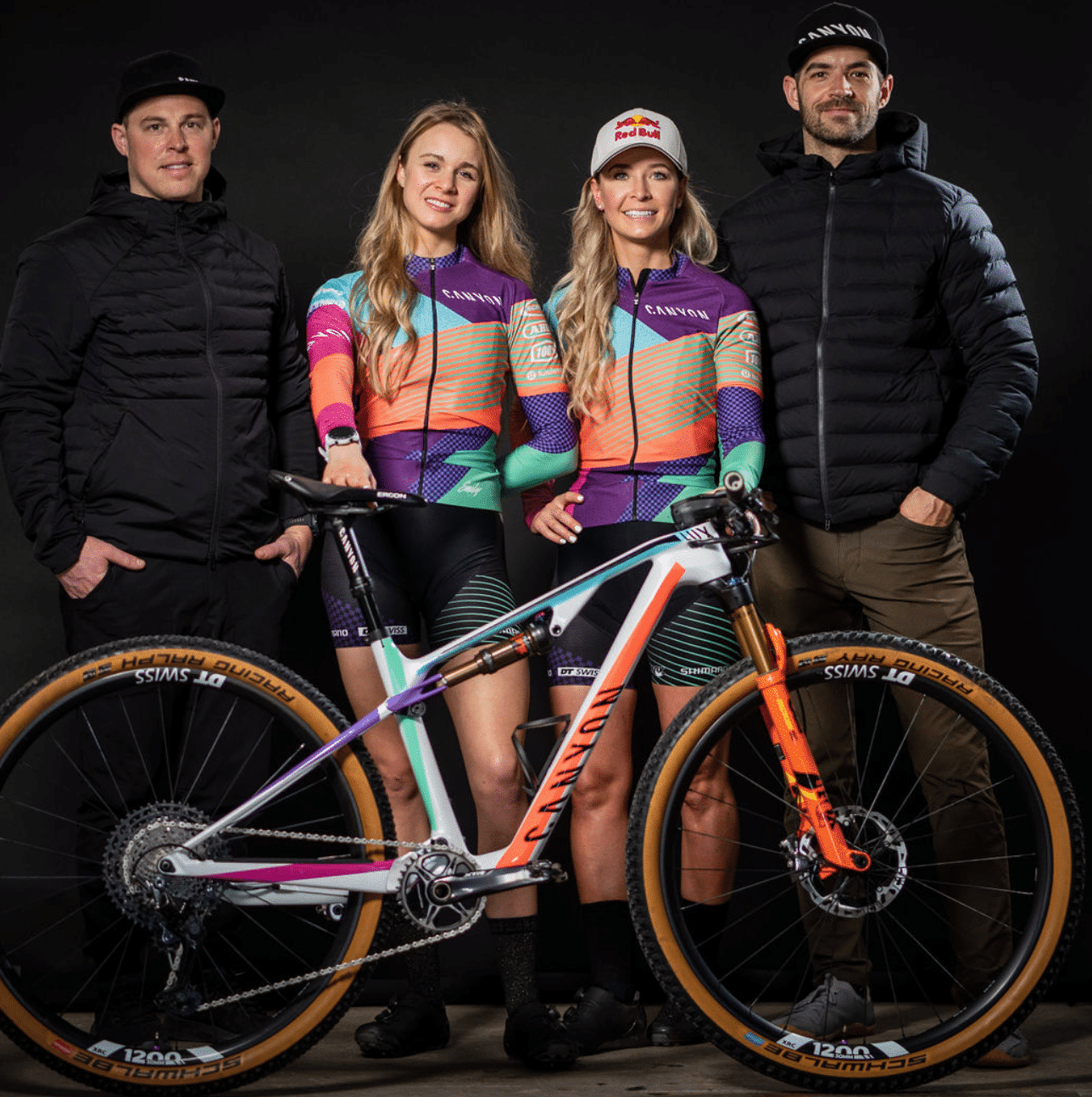 Managed by Adam Morka, this new racing team is focused on performance and a creative vision for the future.

When Canadian National Champion Emily Batty announced that she was leaving Trek Factory Racing, rumors flew as fans wondered where she would end up. In January, she announced her new partnership with Canyon bikes, and now the full details of her new team are ready to share with the world.

For more than two decades, Batty has been a staple in the cross-country mountain biking scene, with two World Championship bronze medals, two Olympic races, and a Pan-American Championship title in addition to multiple national champion titles to her name. Now, with the 2021 Olympic Games on the horizon, Batty’s new team is ready to race. 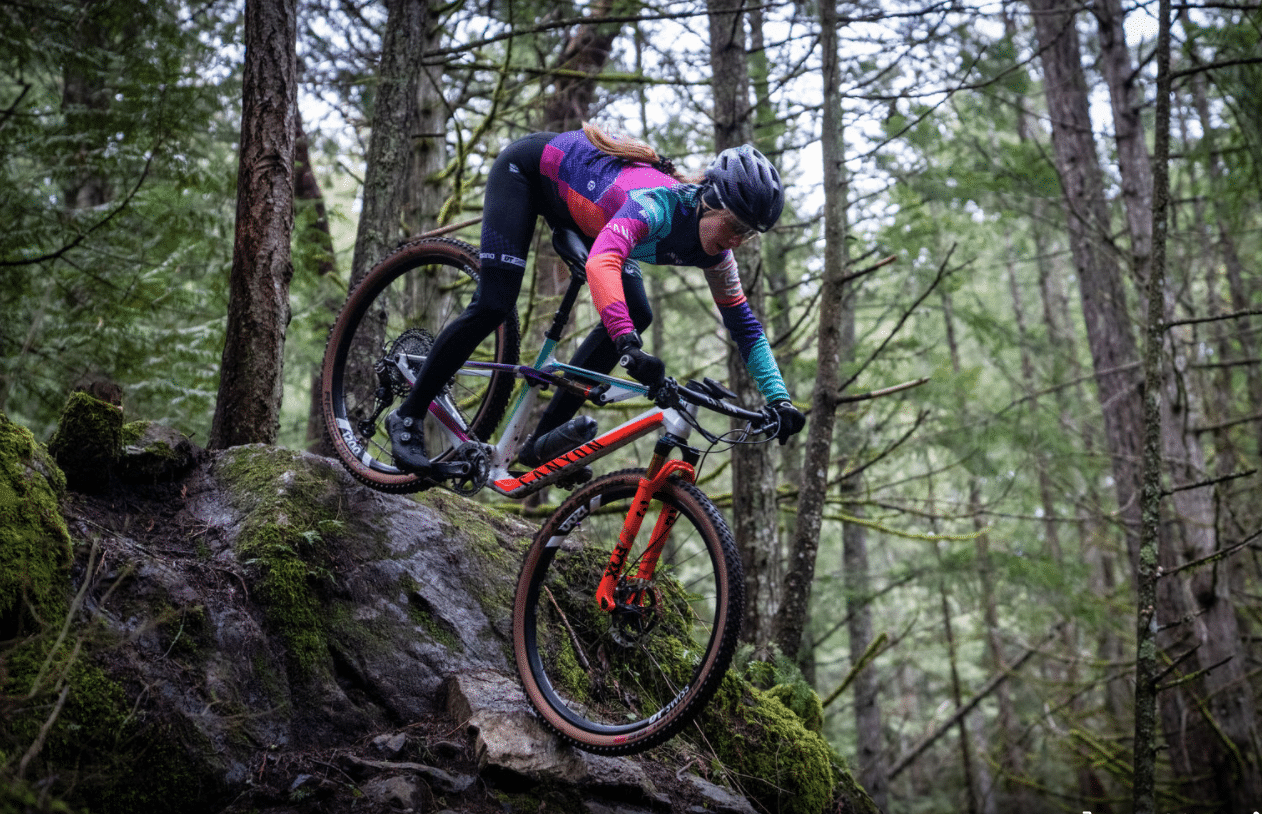 Batty is joined by Canadian U23 National Champion Laurie Arsenault on the team. “It’s a dream to be on a team like this one, and it’s a great opportunity for me to learn from the best and with the best,” Arsenault says. “I remember watching Emily at the Olympics and getting her first National title, and she was someone I wanted to be like. To be able to race on a team with her is fantastic—I’ve never been on a pro team before, so to be on a program that’s this well-supported, I’m just so excited.”

Keeping the team small in the first year of racing was an important decision for Morka, the team owner and race and marketing director. “We are taking a crawl, walk, run approach,” he says. “We want to have a good year and prioritize quality over having a large squad—for now.”

“I feel like it’s taken years to reach this level of support. We’ve worked hard to connect within the cycling community and achieve performances at the highest level. A strong group of people supporting my dreams and aspirations in sport has allowed me to build our own race program and pursue this next chapter. I can’t thank Canyon and all of the new team partners enough for believing in the team and everything I have yet to accomplish in mountain biking and sport. 2021, let’s go!” 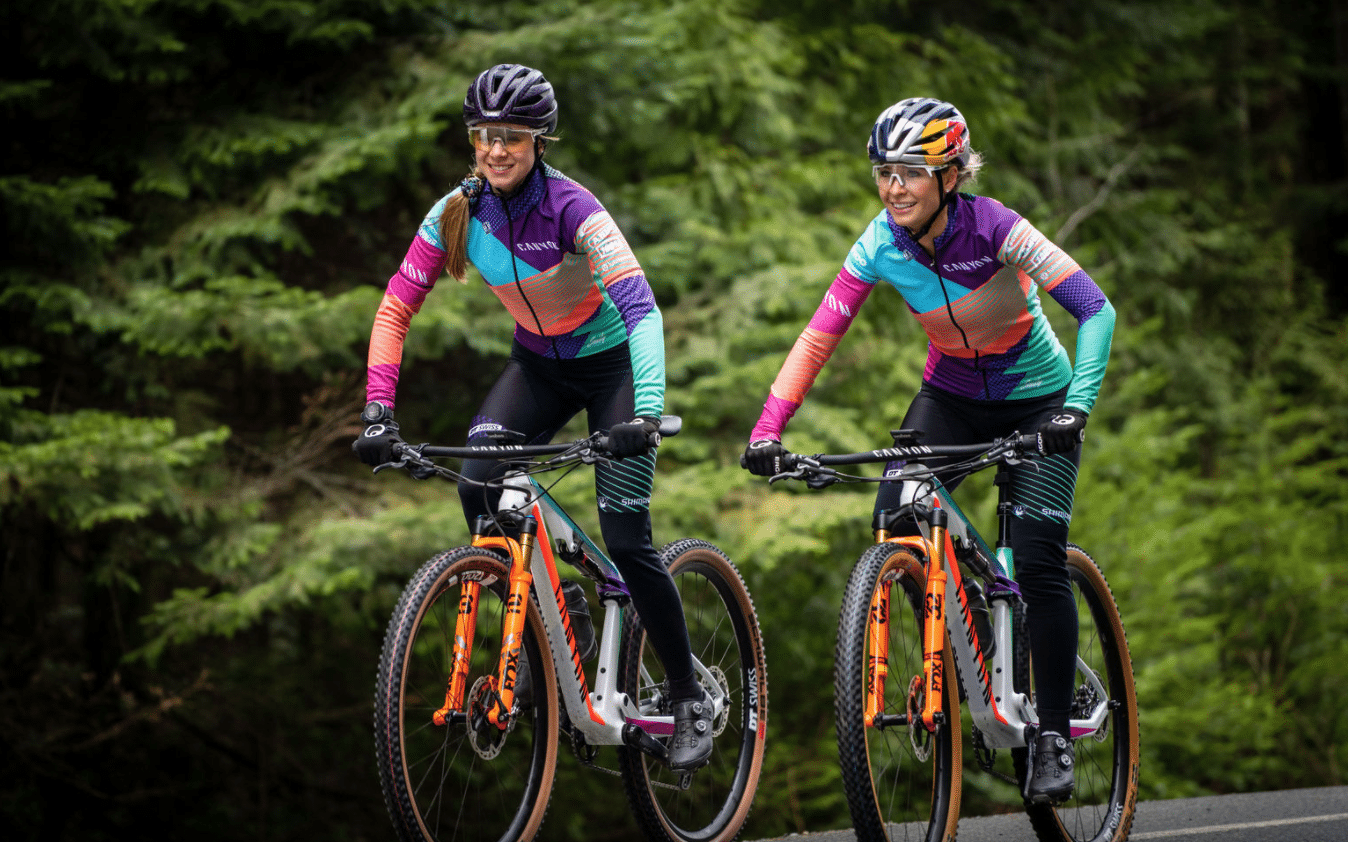 “I also have big World Championships, World Cup, and Olympic goals,” Batty adds. “I’m really chasing that podium at every race. I want to go big on the performance side of things this year: I’m most excited to get back to Val Di Sole for World Championships.”

More than just a race team, Canyon MTB Racing is focused on providing a closer look behind the scenes through different modes of content creation and new initiatives with sponsors. “We have the vision to continue growing within the sport and beyond,” Morka explains. “We wanted to build something completely different while creating a program that can stand the test of time, long after Emily decides she is done racing all while helping develop next-generation athletes on and off the bike.”

“Emily and her entire team perfectly combine a young-at-heart curiosity for new possibilities with an incredible amount of experience at the same time,” says Julian Biefang, Senior Product Manager at Canyon. “This unites us: Together, we strive to achieve the best. The passion for cross-country racing is really in each team member, and that makes our collaboration maximally authentic — and we definitely enjoy it to the max!”

“We’re excited to partner with Emily as one of the top Canadian racers, and the team as a whole. I think the alignment between our company and the team is perfect,” says Phil Cortes, Manager at Bio Racer Canada. “The timing was ideal to start to work with the team, and I know that we’re going to do really great things together.”

“Emily is a perfect example of somebody who’s not just a pure racer, she’s got a lot of other stuff going on. She loves adventure and does so much to support cycling, in general,” says Joe Lawwill, Shimano’s MTB Marketing Specialist. “All those things are so important and make for a great partnership.”

“One of the reasons we wanted to work with Emily and the team is that they’re taking on some new challenges. Emily is starting into this new frontier, and at Wahoo, we really believe in being able to examine yourself and explore what you’re capable of,” says Matt Porter, Content Director at Wahoo. “It’s why we love endurance sport and working with motivated athletes like the ones on this team.”

“We have big goals, for sure,” Morka says. “I would love to see our team become the number one ranked XCO team in the world. That certainly doesn’t happen overnight, but I’m confident we can get there in the near future.” Hopeful that racing plans will come together in a big way, Batty and Arsenault gear up to tackle an ambitious schedule.

Follow along at mtbracing.com for video content, articles, and from the Canyon MTB Racing Team, along with training advice, stories, and offers from our partners to keep you and the good times rolling. 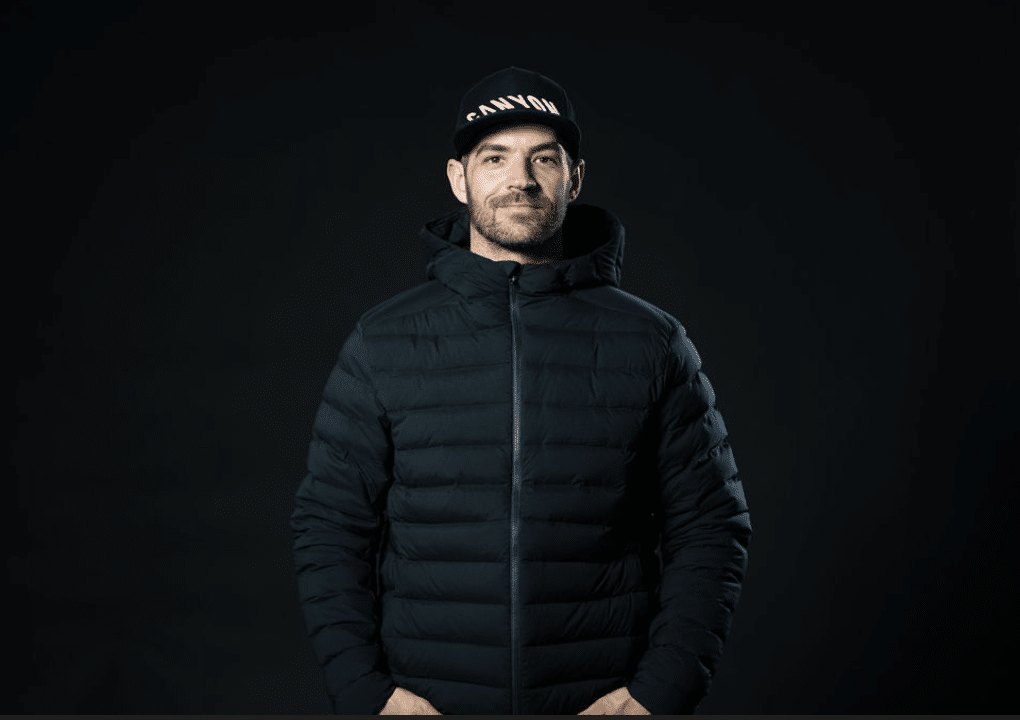 A former professional mountain bike athlete that represented Canada on the national team and was a shortlist Olympic selection athlete for London 2012. Adam helped Emily build her online profile over the years which led to a career as a digital marketer at one of Canada’s fastest-growing SaaS companies as a Marketing Manager. A profound passion for business, storytelling, producing, and creating contentAdam has worked directly with countless skilled trade companies and contractors in the green and snow industry and is the producer on a podcast named Landscape Disruptors. On the side, he and Emily co-founded an NFP incorporation where they aim to get more kids on bikes and produce an annual cycling event named Batty Cross attracting over 1000 attendees. He fills his free time coaching a youth mountain club made up of 600 families while collecting photos and racking up the miles on foot and by bike. Most recently, he and three others rode across Iceland by bicycle they were featured in the film named “A Line In The Sand”. 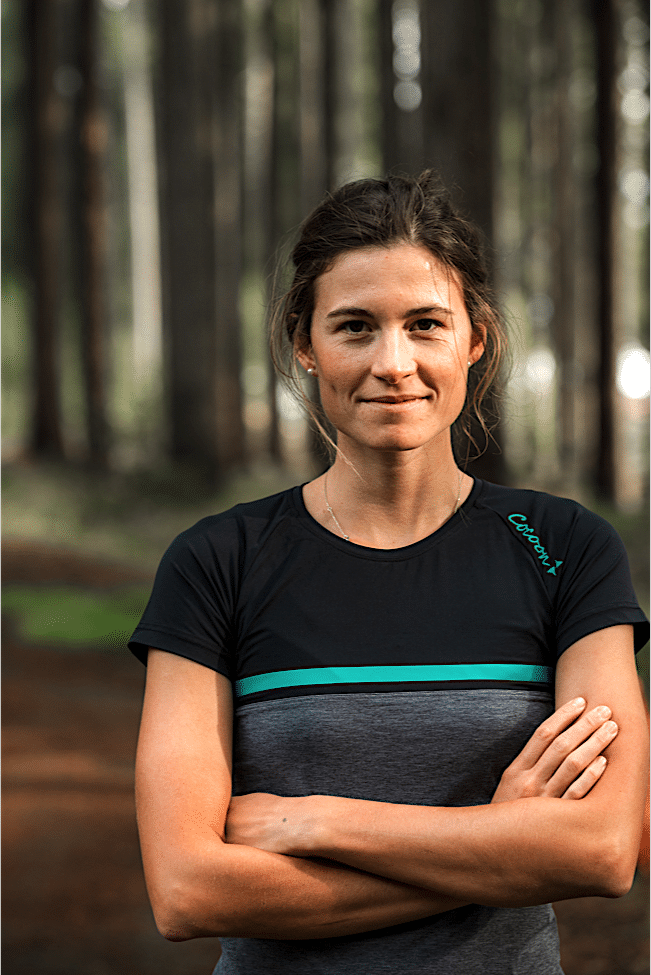 Theresa, lives in Austria and she’s a physiotherapist by profession, sports scientist and a cross-country lover; whether on the bike or on the skis. Most of the time she can be found outdoors, chasing sunsets and helping elite athletes to perform at their very best level.  Theresa joins us from the Mobel Marki Race Team and she’s been on the circuit for years and doubles up with Mountain Bike racing in the Summer and Nordic skiing in the winter. She’s currently at Nordic World Champs. 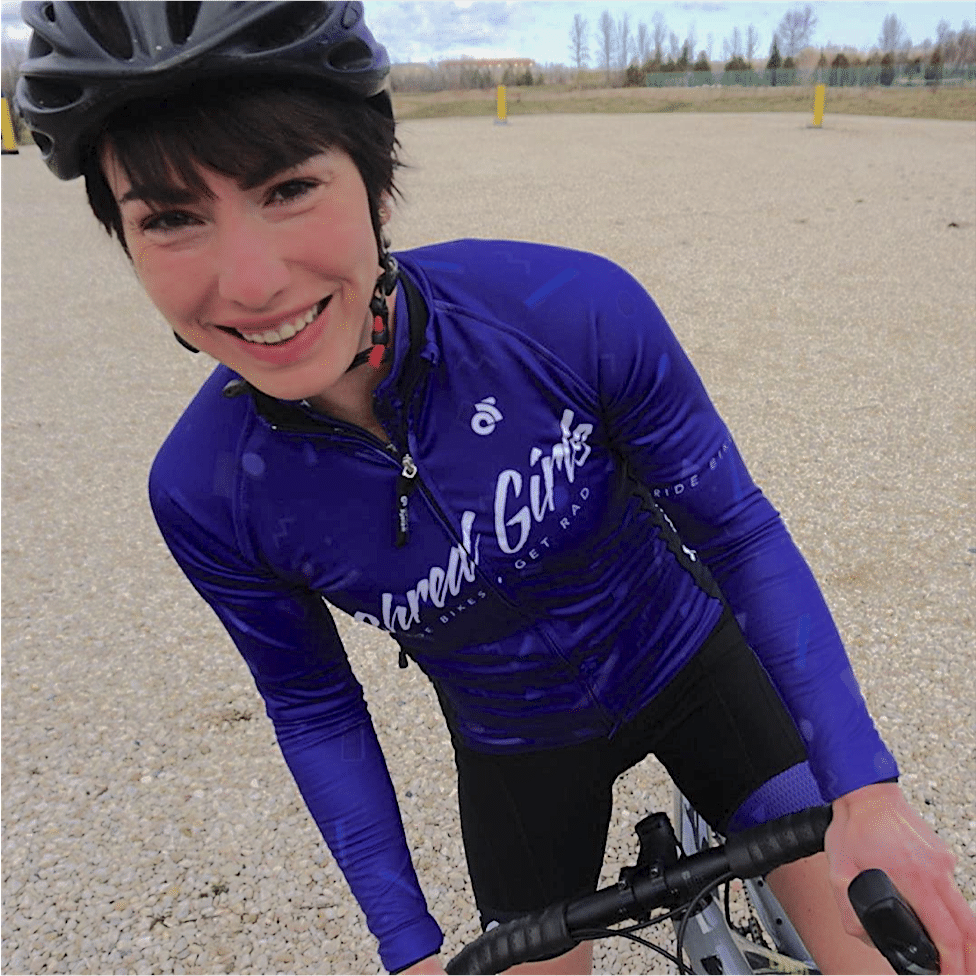 Molly Hurford is a storyteller in love with all things cycling, running, nutrition and movement-related. When not playing outside, she’s writing about being outside and healthy habits for her online business The Consummate Athlete. She’s written multiple books including Becoming A Consummate Athlete and the Shred Girls series, and regularly contributes to publications like Bicycling magazine. Molly is a little obsessed with getting people psyched on adventure, and she regularly teaches yoga and hosts talks and cycling clinics. In her spare time, she does long runs on trails, rides bikes, and hikes with her dachshund named DW and her husband, fellow coach Peter Glassford. You can find her on Instagram and at ConsummateAthlete.com 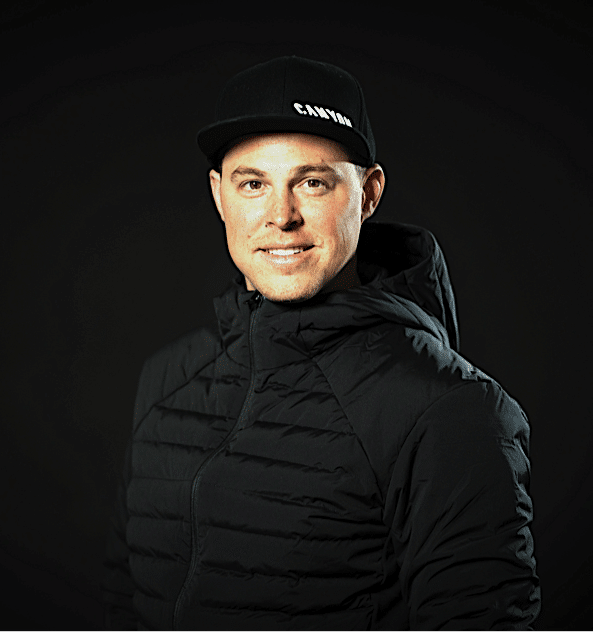 Aside from being Emily’s brother, Mark previously raced on one of Canada’s only professional continental road teams as a domestique for Spider-Tech racing. He conquered everything from Belgium classics to winning Canadian Cyclocross nationals, being a liaison on Steve Bauer Bike Tours at the Tour De France, and more. Since retiring from professional racing, he has focused on building his business as a professional arborist based in the greater Toronto area and brings a wealth of knowledge from years of racing and experience working on bikes and his heavy equipment. 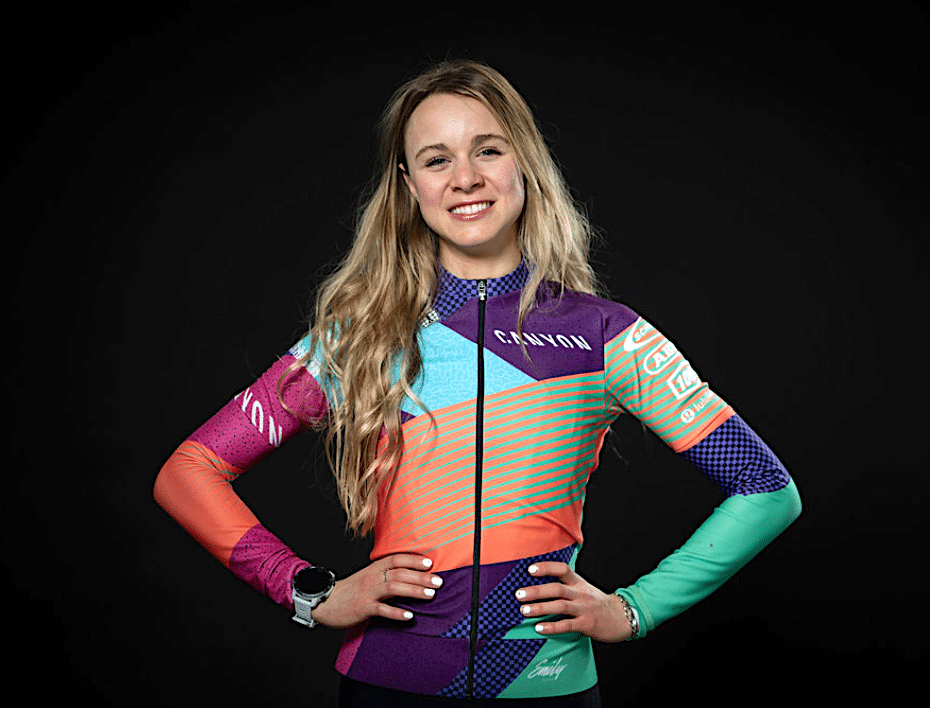 Mountain biking has been part of her life since she was 12 years old. It has always been her greatest joy to chase her ambitions. It’s what gets her out of bed in the morning; the challenge & the accomplishments, the fresh air & the adventures. For Laurie, mountain biking is about pushing her limits, connecting with people, and competing.

She loves sharing her passion for cycling with her community by teaching young kids to develop their skills and reach their goals. Her drive and passion for competing are evident in her committed lifestyle and her consistent top 15 performances on the World cup circuit. She’s been four times national Champion and achieved a top 9 at the U23 World Championships in 2019. Her dream is to win World cups and Olympic medals.’ 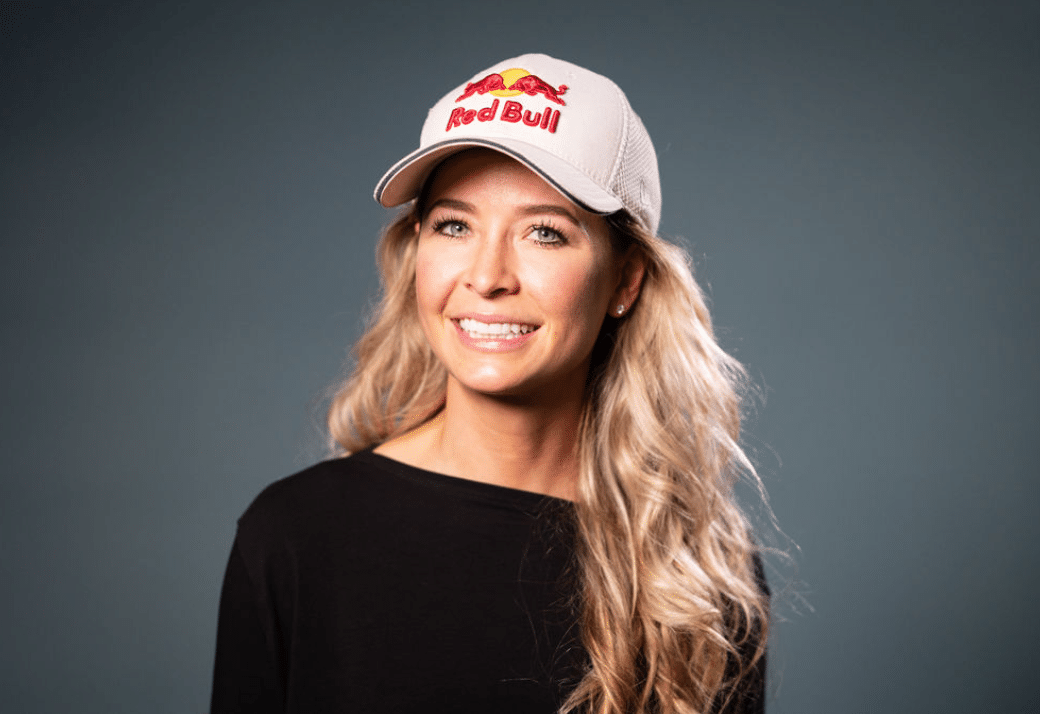 Born into a mountain bike-crazy family on a cattle farm in Brooklin, Ontario, Emily Batty first rode bikes for leisure with her brothers from the age of 10 but then turned her passion for all things two-wheeled into a career racing bikes. As a promising junior, Batty competed in her first World Championships in 2005 and, since her move into the senior ranks, she’s progressively achieved better results as the years have passed on and is now a regular on the World Cup circuit.

At the age of 23, Emily competed in the London 2012 Olympics. Three days before the race, she had a bad crash in training and broke her collarbone. Not wanting to let her country down, Emily raced injured and finished 26th place. In the 2016 Rio Olympic Games, she came back with a vengeance and finished 4th place just 2 second off the bronze medal. Other career highlights include a bronze medal at World Championships in 2016 and 2018 and finishing 3rd overall in the UCI Mountain Bike Word Cups twice in her career. Emily also recently rode across Iceland and featured in the film “A Line In The Sand”