A short-travel trail bike with an attitude 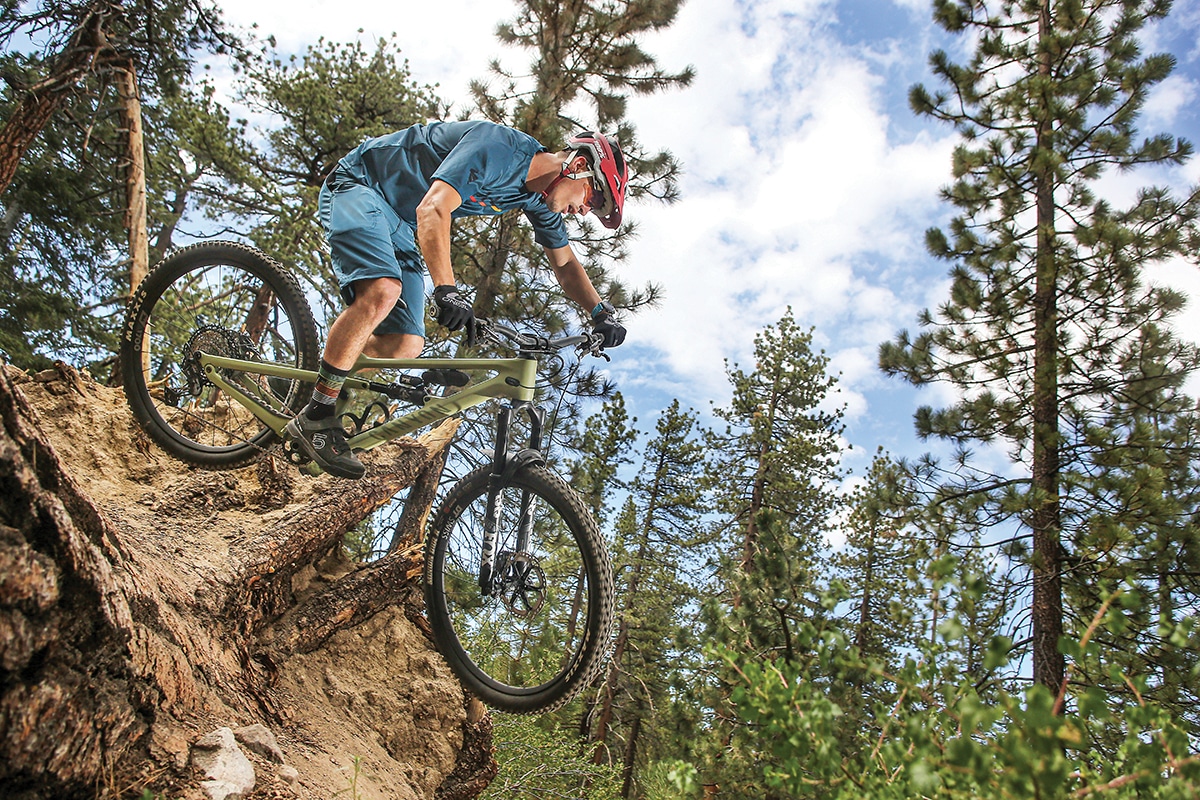 The question is, should you get an enduro bike for ultimate downhill performance and suffer on the climbs, or should you get a trail bike for better climbing efficiency but suffer on the descents? Canyon is trying to answer that question with its Spectral 125. It offers all the attitude of the previous Spectral series with just a bit less travel. Instead of 160mm of front and 150mm of rear travel, they’ve bumped it down to 140mm of front and 125mm of rear travel while keeping all the other numbers relatively the same. The result? A hard-hitting, snappy trail bike that can climb well and descend even better.

This frame is offered in both aluminum and carbon models; we tested the carbon version. The frame weighs a claimed 2239 grams (4.94 pounds) for the CF carbon version and around 3000 grams (6.61 pounds) for the alloy version. As the name implies, this bike only has 125mm of suspension travel in the back and is designed to take a 140mm-travel fork. With a reach of 460mm on the tested size medium, it’s around 10mm longer than many bikes in its category. There is a low/high flip-chip shock mount that steepens or slackens the head tube angle by 0.5 degrees and changes the bottom bracket height by 8mm. In low, the head tube angle is 64 degrees with an effective seat tube angle of 76 degrees.

Canyon has built this bike with the idea that you’ll be able to send the downhill just as hard as on their longer-travel bikes. With that in mind, they’ve built the chassis to meet category 4 standards, which is usually the designation for enduro-level strength and impact resistance. Due to where the shock is mounted, there isn’t a whole lot of room for a large bottle to be held in the frame. They recommend using their 600ml bottle and sideload cage to get the most out of the space. As with most bikes of this generation, this bike features internal cable routing for a cleaner look and ease of maintenance. They chose to go with replaceable thread inserts in all the suspension pivots, so if you somehow manage to strip out the threads, you’re not out an entire frame.

We tested the Spectral 125 CF 8, which is the mid-level carbon model. This build features the Shimano Deore XT M8100 12-speed system. The Shimano Deore XT M8120 quad-piston calipers take care of the braking. Maxxis provided the tires with a DHR-II 3C Maxxterra in the front and a Dissector in the rear mounted to DT Swiss XM 1700 wheels. The stem, bars and adjustable dropper post are Canyon’s own in-house brand G5 while they use Ergon for the grips and the saddle. Our test bike also came with a little pouch mounted just under the top tube for tool storage.

Canyon gives the Spectral a 140mm-travel Fox 36 Performance Elite with the Grip2 damper up front and a Fox Float X Performance shock in the rear. Using their version of the Horst-Link design to achieve 125mm of travel, Canyon claims a “smooth suspension that resists bottoming out.” They wanted to keep the small-bump compliance without sacrificing the “pop” you expect and typically need out of a bike with less travel.

Steep climb? Technical climb? The Spectral 125 asks, “What climb?” In each one of our tests, we were amazed at how well this bike climbed. It almost made the climbs, dare we say, enjoyable. Based on Canyon’s claims of this bike being “the rowdy one,” we expected it to climb more like a long-travel trail or enduro bike. That is just not the case. The platform and long reach made us quite comfortable on the varying terrain where we tested, even the obscenely steep and loose trails you frequently find in Southern California.

Most of the testing was done with the suspension set in the low mode. At one point, we decided we needed to see how it works in the high mode. We flipped the chip and took off. Though the difference wasn’t night and day, it improved the ride on steeper climbs by putting us a little bit more over the front of the bike. One thing we really liked about its climbing characteristics was the lack of pedal bob. We didn’t feel the need to flip the suspension into climbing mode at any point while testing this bike. We left it open the whole time with no issues. The suspension was still active and made it easy to pedal up anything technical with plenty of grip without sacrificing efficiency.

Of course, this bike excelled on the descents. At one point we were riding an unfamiliar trail that turned out to be much rowdier than expected, a trail we would normally ride on an enduro bike. The Spectral 125 shined and didn’t flinch, even when faced with some gnarly drops. Would we have rather taken the longer-travel version on that trail? Yes, but the 125 did an amazing job despite its small stature. As promised, the rear suspension stays very active in the initial stroke and gets steadily stiffer in the mid-stroke, giving the feeling that it has more than just 125mm of travel. Even on heavier hits, the bike didn’t punish our ankles by instantly bottoming out.

We also took this bike to Snow Summit bike park for a few laps. Though we wouldn’t recommend this be your weekly bike park rig, when faced with large jumps and fast, technical trails and berms, the Spectral did great. It excelled when the jumps got steep, and the airtime grew as long as there was a good backside to land on.

We didn’t do anything to upgrade this bike to feel comfortable riding it, but the fork only comes with one volume spacer and bottoms out rather quickly on big hits. We like a little bit more ramp, especially in a bike with short travel that boasts such a “send it” attitude, so we added one more spacer.

Another thing we would’ve liked is the ability to fit a larger water bottle on the downtube. When it’s hot, a small bottle doesn’t cut it. It can be a bummer when it’s warm, and you want to go out with just a tool in your pocket and a bottle on the bike. We found ourselves having to wear a backpack or hip pack just to carry water, even on shorter rides.

The Spectral 125 is nimble and flickable both in cornering and in the air, but it is stable enough to feel confident when going fast. It doesn’t feel like a short-travel bike at speed. It felt safe and stable, even with how nimble it is. Wrecking crew test riders found themselves not wanting to ride other bikes, even their own, when this bike was an option. This bike is a quiver killer if you let it be. It is one of the most versatile bikes we have tested.

GET READY FOR THE BENTONVILLE BIKE FEST